You are here:
Home / Genshin Impact: How To Beat The Oceanic Defender Challenge

Genshin Impact: How To Beat The Oceanic Defender Challenge

The storyline of this year’s Lantern Rite Festival in Genshin Impact may be wrapping up, but that doesn’t mean all the fanciful festivities have gone away yet. The final stages of each activity have just unlocked, allowing players to flex their high scores and grab every elusive piece of loot available from the event before it ends.

Players should indeed have access to all stages of Flameplume Starflowers, The Great Gathering, and Wondrous Shadows at this point, assuming the event’s Story Quests have been necessarily progressed. In addition to these final stages, a new challenge is now available: Oceanic Defender. This combat-focused activity pits you against Beisht once again, the vengeful sea-monster wife of Osial who tried to destroy the newly rebuilt Jade Chamber. Conquering this familiar foe is essential to achieving 100 percent completion of this event, so follow this guide for some tips to do so.

How To Unlock The Oceanic Defender Event 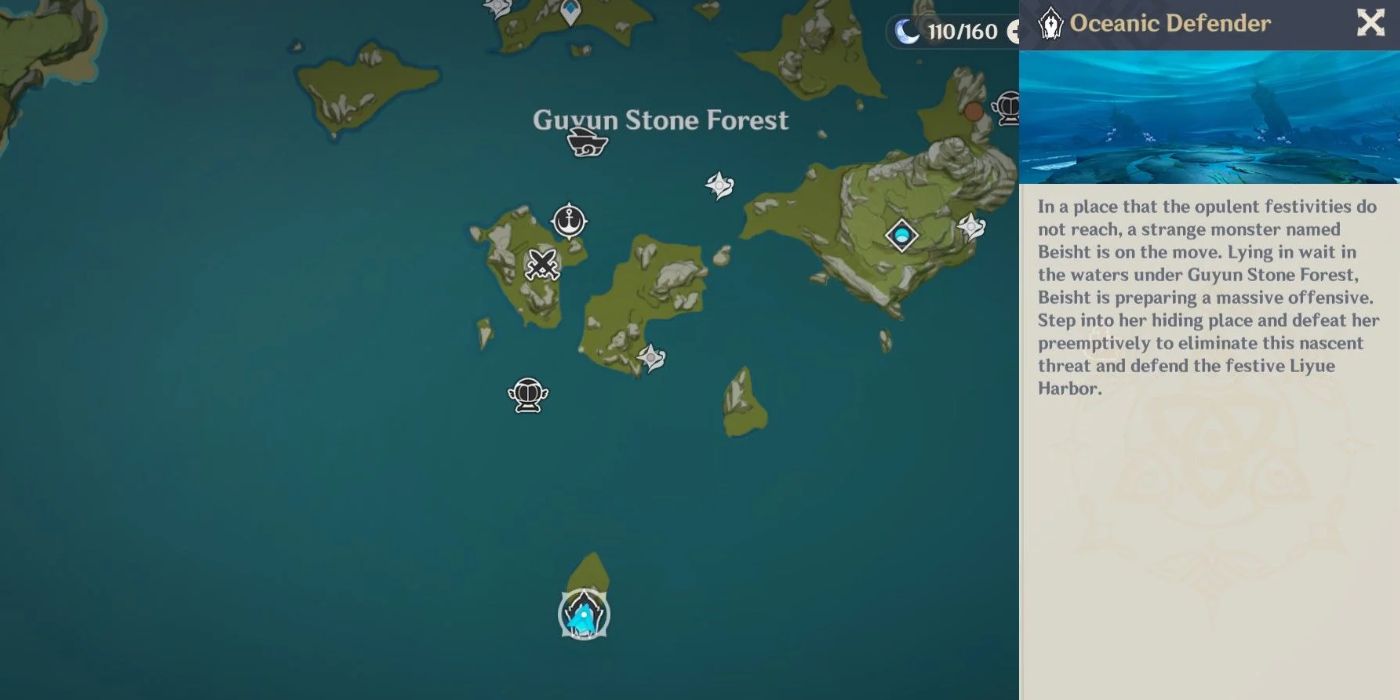 If you’re caught up in terms of Story Quests, the Oceanic Defender event should be automatically unlocked on your event page. Simply select “Event Details,” then “Oceanic Defender,” and finally “Go to Challenge” to navigate to the activity.

Doing this will direct you towards a small island south of the Guyun Stone Forest on the map. You could travel there via Waverider if you really wanted to, but the game will allow you to teleport directly to the location. There, you will be presented with an abyss-styled door; interacting with this door will take you to a party-setup screen from which you can start the Boss encounter. 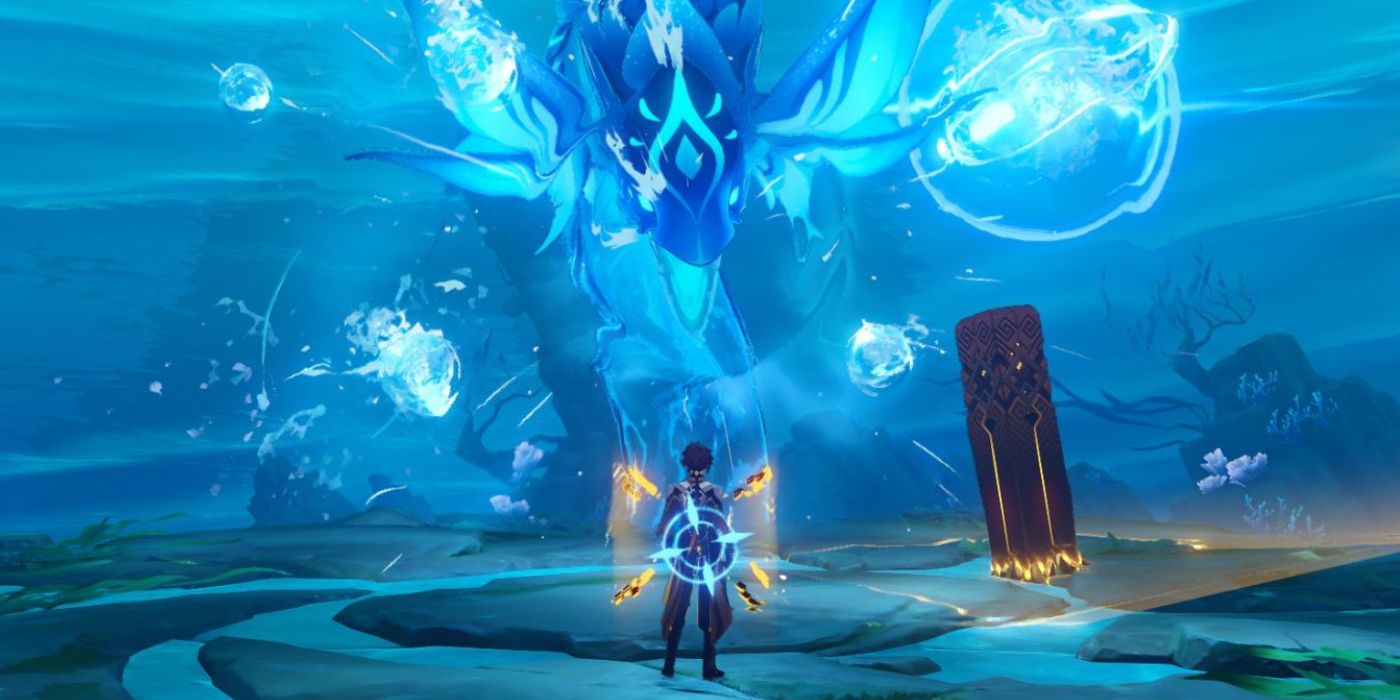 If you’re taking on the Oceanic Defender challenge then you’ve already felled Beisht once before. However, the fight must be completed multiple times to gather all its rewards, meaning that a safe, efficient strategy for taking down the Hydro beast is a must.

The fight is not especially mechanically-intensive, though there are certain attacks patterns you should be aware of. First, note that all three heads of the Boss must be destroyed in order to defeat Beisht and end the challenge.

A head is considered destroyed when its individual health bar reaches almost zero, and it cannot be damaged anymore.

Defeating two heads will cause Beisht to enter an enraged state with more frequent attacks until her final head is vanquished. 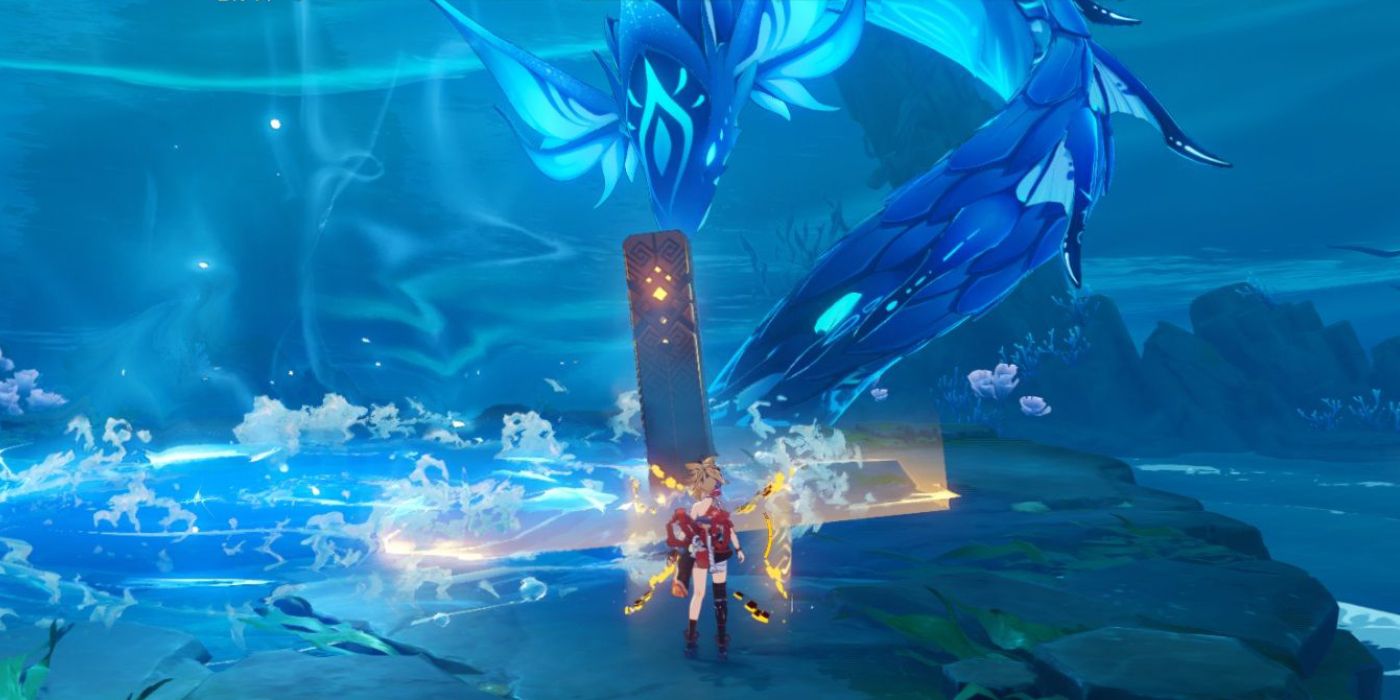 Beisht will employ several fierce attacks against you in an attempt to avenge her late partner. For one, she will sometimes shoot out Hydro orbs that track towards your character. This attack is indicated by a blue reticle, which should be your sign to dodge, shield yourself, or block the orbs with a Geo Construct.

Other attacks include the-world’s-deadliest-raindrops and a whirlpool that will try to suck you in before detonating; so make sure you save some Stamina to escape this one. Beisht also has an ultra-powerful Jetstream attack where one of her heads will suck in for a while before blasting a massive torrent of Hydro DMG out from its mouth. Avoid this attack at all costs unless you want to be drying your socks at a Statue of The Seven. 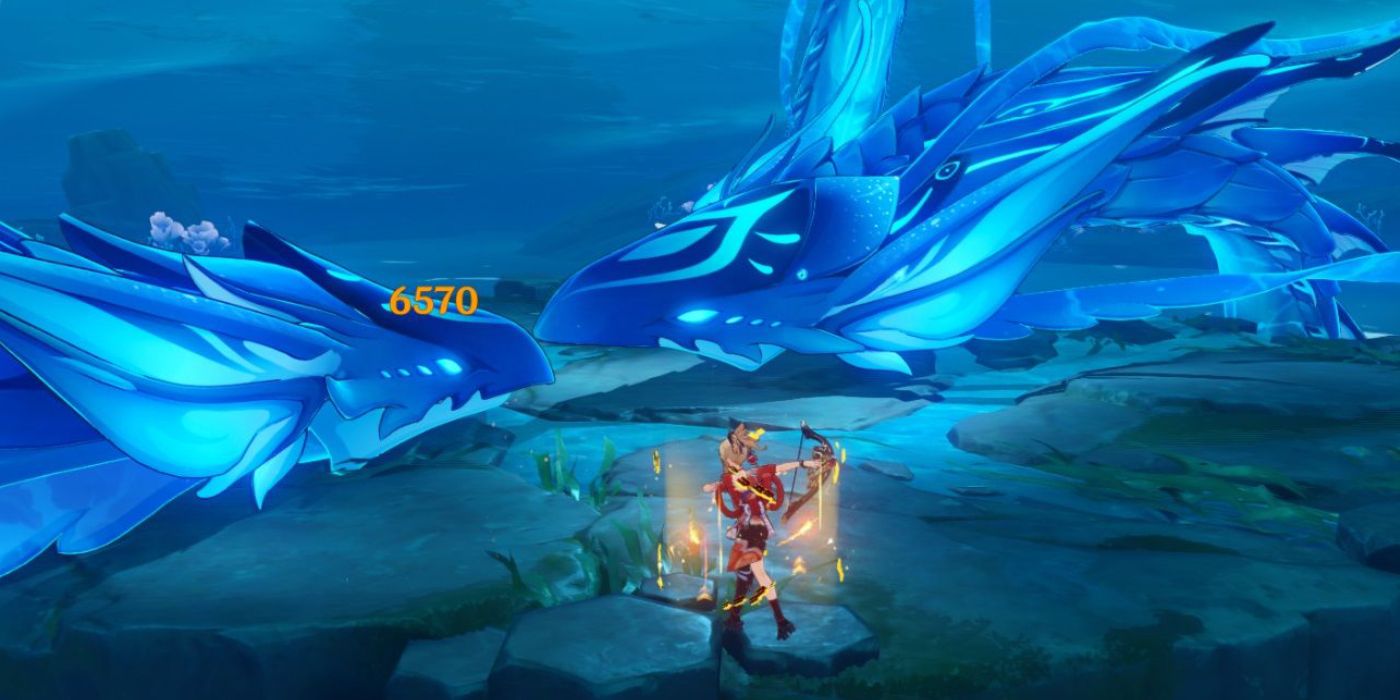 Beisht’s heads can sometimes be damaged while they are circling the outer edge of the arena. Additionally, certain attacks will leave her heads recovering on the ground for a short period of time. This is the optimal moment to damage them, but you must work quickly since the vulnerability period is brief.

Since Beisht’s vulnerability phases are so short, you’ll want to enlist characters with quick, front-loaded surges of damage for this fight. Characters like Ayaka, Hu Tao, Raiden, or Keqing offer Elemental Bursts and attacks that can deal impressive damage quickly. Use these without hesitation once the Boss’ head is defenseless.

As soon as the encounter begins, Beisht's main head will be damageable at the front edge of the arena. If you're quick enough, you can deplete this head's health bar before Beisht even reacts.

Ranged DPS characters offer a unique benefit in this challenge since they can damage Beisht’s heads at almost all times. Ganyu and Yoimiya are likely the premier options for this approach, but characters like Ningguang, Yanfei, and Fischl would also be solid choices to speed up the fight. 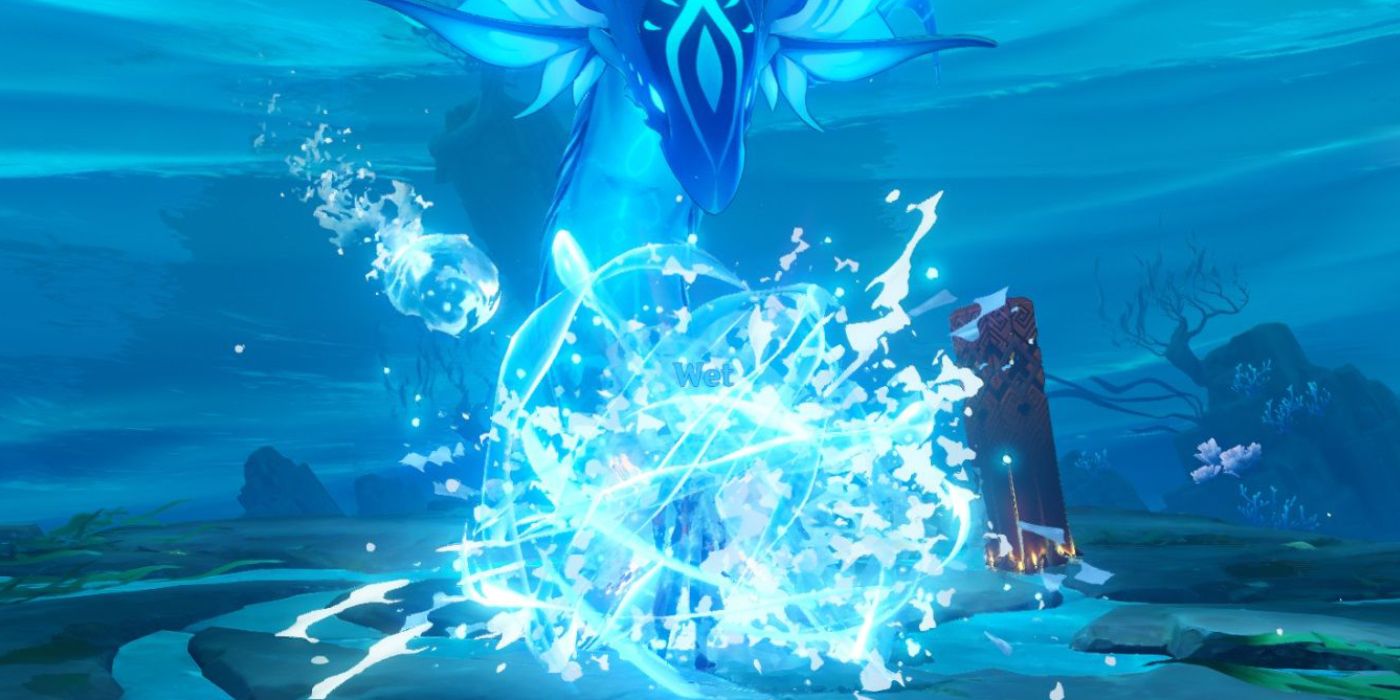 All of Beisht’s attacks can be shielded against, so characters such as Zhongli, Diona, and Noelle would serve you well here as supports. Healers can also be useful in case you take any rogue damage, but you’ll probably be better off with supports that can enhance your damage and help you end the battle before things get too dicey in the first place.

Beisht has a 70 percent Resistance to Hydro DMG. Sorry Childe and Xingqiu, but you guys will probably want to sit this fight out. 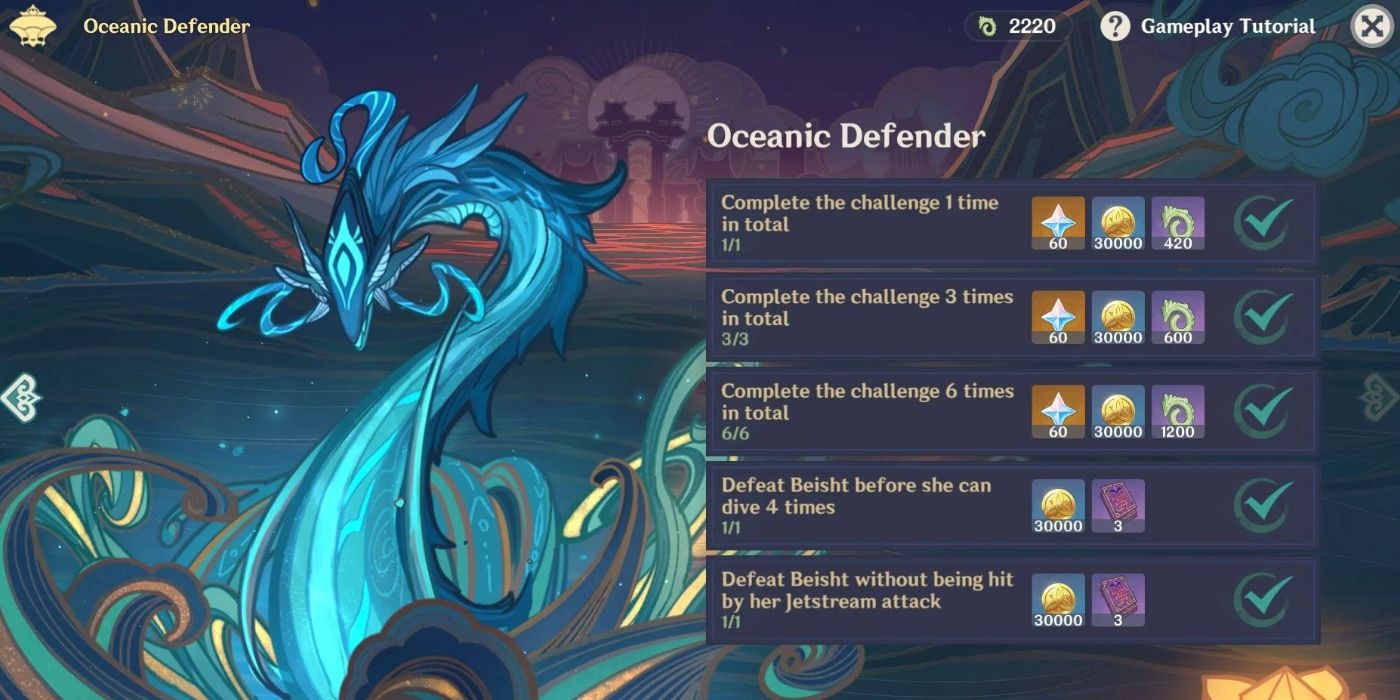 Completing the Oceanic Defender challenge six times will net you everything you need in terms of Primogems and Conquest Talismans. There are also two extra achievements for players who want to earn a little more Mora and Hero’s Wits as well.

The Conquest Talismans from this challenge are the final piece of the puzzle for those looking to acquire absolutely everything from the Fleeting Stars in Flight event. They can be spent in the Afterglow Market Stage 3 section of the Event Shop in exchange for a Crown of Insight and other Talent Upgrade Materials. They will also allow players to finally invite a four-star Liyue character to their team via Prosperous Partnerships, and they will also allow you to unlock Ningguang’s new outfit, Orchid’s Evening Gown, from The Moon’s Comely Brow.