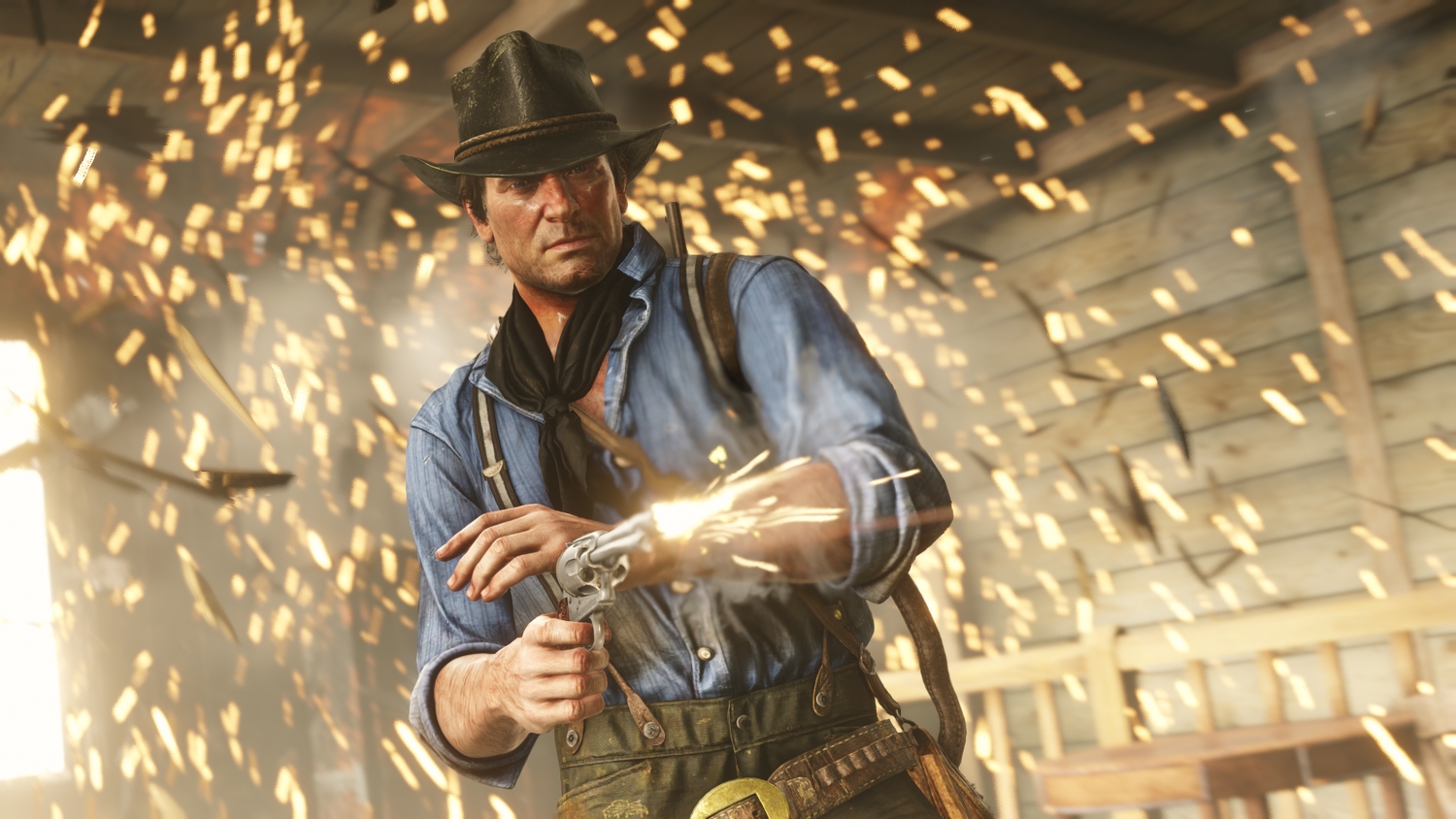 The Monday letters page is upset at all the video game company acquisitions, as one reader tries to buy a second-hand PS3.

Cowboy developers
Fun Reader’s Feature at the weekend, about overrated franchises, and I wouldn’t necessarily argue with any of them. Or at least I wouldn’t pretend any of them are close to being my favourites or have any games that I love. It’s barely a franchise, since it only has three games (if you even count Red Dead Revolver) but the one that immediately came to mind for me was Red Dead Redemption.

I always found the original to be overrated but the second one may be my least favourite game I’ve ever beaten. Thinking back now, I don’t know how I made it that far, as it goes on forever and I’d got sick of it long before then. But I was fascinated to see how it would end and what it was building to, and the answer was… nothing other than a time loop back to the first game.

The story, which was already extremely vague, peters out to nothing and the resolution with the main characters is extremely unsatisfying and somehow, despite being so long, underwritten. The endless conversations on horseback get more and more meaningless the further you get into the game, as you even begin to resent the action, given how heavily scripted and one dimensional it all is.

Yes, the graphics are pretty and the game world is amazing but that doesn’t add up to an enjoyable game. The voice acting is great too but that doesn’t magically make what they’re saying any more interesting. Just a really bad game all round, as far as I’m concerned.
Couscous

Two horse race
I’m interested in the show down between Elden Ring and God Of War Ragnarök in this year’s game awards, but I really have no idea who’s going to win because I still don’t know what kind of sequel God of War is trying to be. At first it just looked like the same thing again with a different story but since that last trailer… like another reader said it almost seems as if there’s a secret element that Sony are trying to hide.

I’d almost say it’s the fact that Atreus is the big bad, but there’s too much of him in the promotional stuff that it really would be a Hideo Kojima style twist if that was the case.

I hope it has something up its sleeve though as I’m not the biggest fan of Elden Ring and while it was good, I don’t really like to think of it as the best of the year. If there is a big twist, I just hope it isn’t spoiled before the game comes out.
Benson

Always a bigger fish
There would be an amusing irony if Embracer Group – faceless corporation I’d never heard of until recently – got bought up by another even more anonymous company, but I really hope Capcom, or any other long running company, doesn’t end up the same way. These firms have been around for almost half a century at this point and to imagine them being sucked up into just one department of a larger entity is upsetting.

I’ve yet to see or hear of any positive side to these endless acquisitions. Microsoft hasn’t even promised to fix Bethesda’s QA yet, so what are the benefits to anyone other than the shareholders? None, I expect.

Unless these new owners come and tell the Resident Evil crew to make their dialogue worse, I’d be happy with that. I miss the good old days where that was half the fun.
Pendergast

The leg work
I certainly agree that Google and the other big companies seem to underestimate gaming. They seem to have a very patronising view of it, like it’s something simple they can just come in and take over with enough money. As the Reader’s Feature at the weekend pointed out, this is essentially the attitude of Microsoft as well, even if they have slowly learnt along the way.

The attitude does still seem to bludgeon out and out spend though, with a very narrow view of gaming that seems to largely exclude Japan and, at least going by their own games, anything that isn’t heavily multiplayer. Sony and Nintendo has a much wider range of games and it’s taken Microsoft basically 20 years to realise they should too.

I doubt Google will even get that far unless it has a major change of attitude and doesn’t think that just turning up is an automatic win. The impression you get though is that they already can’t be bothered to put in the leg work.
Tully

One more go
I’ve just finished XCOM 2: War Of The Chosen on Switch again. Coupled with the base game on the PlayStation 4, then the War Of The Chosen DLC, and now the Switch collection I’ve lost count of how many times I’ve played it.

My Hot Topic proposal is game campaigns you replay every once in a while and enjoy each subsequent playthrough as much as the first time, it doesn’t get stale. No prizes for guessing my proposal.
Chevy Malibu (PSN ID)
PS: Towards the end of the campaign it looked like the game had frozen during loading screens, patience is a virtue however. It took a couple of minutes but the Switch finally wheezed its way out of a seemingly endless loop.

U gotta be kidding
It would be atypical Nintendo strategy, but I think best route for Switch 2 would be more of the same. The key hook of hybrid handheld/console and perfect form factor remain a potent pull. As does the games library with multiple 10/10s delivered each generation. I would assume here, squeezing in a slightly bigger and better screen and enhanced specs capable of running PlayStation 4 era ports capably.

From there, the strategy for Switch 2 would be mainly outside of the hardware. Nintendo should double down on cementing reasons why the original Switch has been a runaway success:

Finally, I would consider calling it the Switch U. Guaranteed sales.
i.e.mcr (NN ID)

Retro hardware
Can anyone recommend a good place to buy a PlayStation 3 console? Presumably you can’t get new ones now, but is there anywhere to get a second-hand or refurbished one for a reasonable price?

I have a CeX nearby, but I’ve had issues buying hardware from them in the past. Many thanks in advance.
ANON

GC: Have you tried eBay? The going rate seems to be around £50.

Remaining theories
I played the first few minutes of What Remains Of Edith Finch on Game Pass just before it left, as it had been on my list since release. That walk halfway up the drive was enough to convince me to buy the game. I opted for the Switch version so I could play it without needing to commandeer the TV and… my word.

I couldn’t remember the details from your review, and I only went back to reread it after completing the game. As a result, I felt impending dread, like an ooglie booglie was going to jump out at any moment, until I got into the basement, at which point it dawned on me what the game was and wasn’t.

What a journey it was. Learning just enough of the details of the family members’ lives to understand them but leaving a nice bit of ambiguity. And the gameplay on some of the flashbacks was interesting and often heartbreaking – Gregory and Walter in particular.

I looked up a couple of theories about one or two Finches but, honestly, I prefer what the game leaves us with.

And it doesn’t outstay its welcome.

If anyone has been putting it off longer than I have, get hold of the game now!
FoximusPrime81 (gamertag/NN ID/Twitter)

Inbox also-rans
If Lucasfilm Games are going to do two Star Wars games a year I just hope that doesn’t impact on them making other games as well. I loved Monkey Island and would hate that to be their last graphic adventure.
Poirot

Finally got to level 10 in Splatoon 3 and unlocked the extra game modes. As that other reader said they are pretty great, the whole game is actually. Probably my favourite of the year so far.
Ogram

This week’s Hot Topic
The subject for this weekend’s Inbox was suggested by reader Razzledazzle, who asks what game mechanic have you never been able to get the hang of?

His example was the web-swinging in Spider-Man, but it can be any element of a game, from a general concept such as flying to something more specific like the special moves in a fighting game.

Are you completely unable to pull off the mechanic or is it more that you’re just not very good at it? How much effort have you made to get better and what would you change to make it easier?