You are here:
Home / Forza Horizon Is Secretly A Game About A Billionaire Cult Leader

Forza Horizon Is Secretly A Game About A Billionaire Cult Leader

I've got a theory about Forza Horizon. At first glance it seems to be an innocent story about a music slash motorsport festival, and the 'superstar' driver (that's you) at the heart of it. These games are set in a perfect, sanitised world with no problems or negativity. No one is miserable, no one has issues. Everyone loves you, your vast collection of luxury cars, and your terrible dancing. If you come fifth in a race, the people you surround yourself with—festival organisers, other drivers, assistants—will act like you came first. You can do no wrong.

This is designed to make you, the player, feel like the greatest person who ever lived. The Forza Horizon series has been doing this for years, and the games have only grown more cloyingly sycophantic over time. If you so much as scratch your arse in Forza Horizon 5, the screen explodes with fireworks and confetti and a cacophony of voices buzzes in your ear about how incredibly awesome and perfect you are. It's deeply grating, but the driving and open worlds are so good in these games that I have to force myself to endure its nonsense. 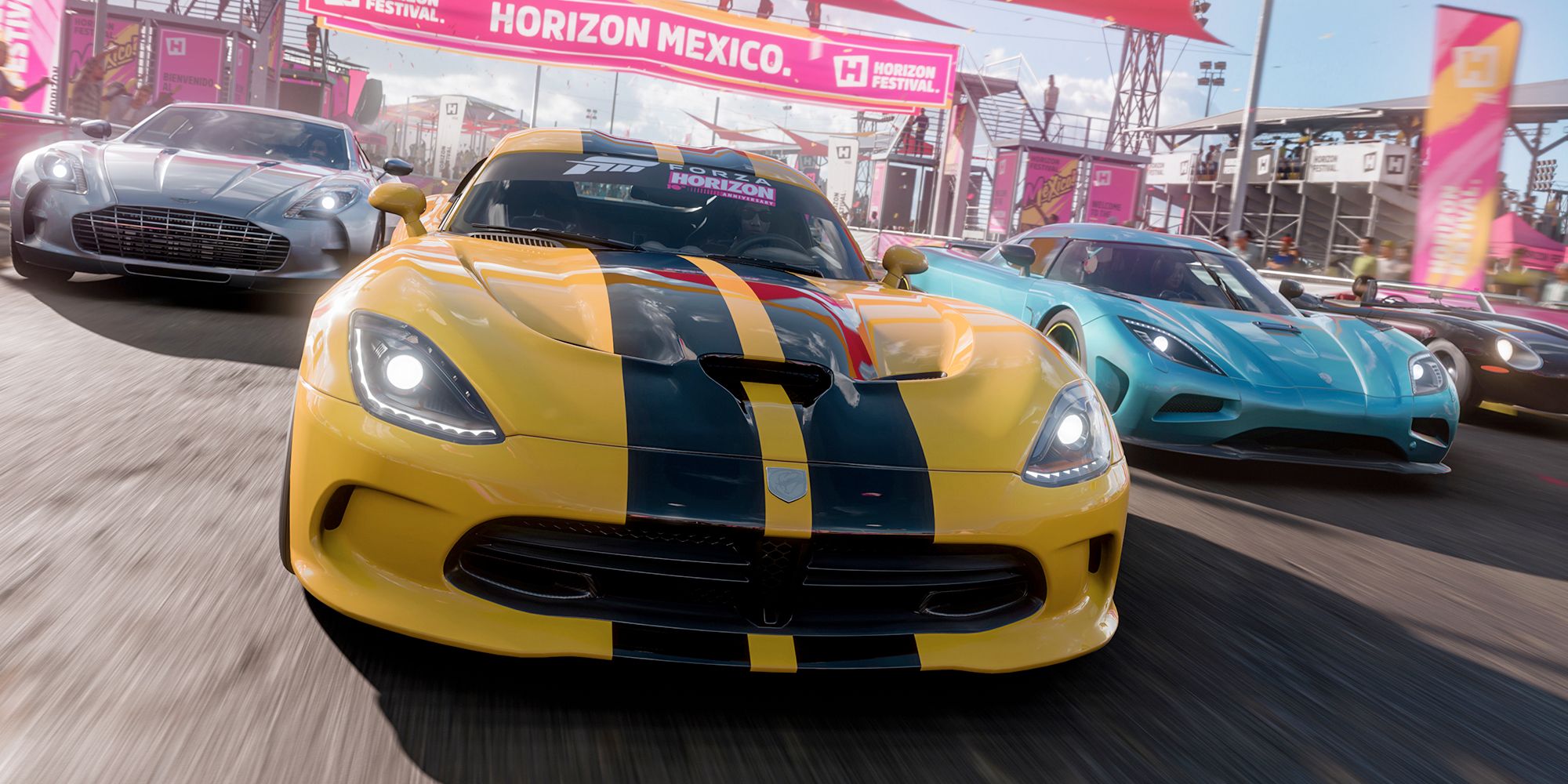 That's one theory anyway. It's easy to chalk the relentless bum-kissing in these games up to the developers trying to make you feel special and empowered, but I think there's something else going on here. The game presents the main character, and by extension you, as a regular person who became world renowned simply by being really good at driving cars. There are frequent references to your exploits in other Horizon festivals (read: previous games) to justify why the crowd goes absolutely bananas whenever they catch a glimpse of you.

But here's my reading. You're not a talented driver who ascended through pure talent: you are, in fact, a billionaire cult leader. The Horizon festival is not a real event, but an expensive, elaborate shrine to your fragile ego. In the real world you're an asshole who no one respects, but rather than become a better person you've decided to spend your fortune on setting up events across the globe attended by thousands of actors who are paid to treat you like they love you. All those people loudly cheering for you? They don't mean it.

Or maybe some of them do, but for the wrong reasons. Your character could be a particularly charismatic billionaire who has somehow managed to convince tens of thousands of people to hang on their every word. The crowd at the Horizon festival aren't paid actors: they're loyal followers of your cult, hopelessly devoted to you, blind to your failings. When they cheer, they do it with religious fervour. At the end of the festival you all gather on a hilltop and sacrifice some dissenting cultist in a giant wicker effigy (of yourself, naturally) as the sun sets. 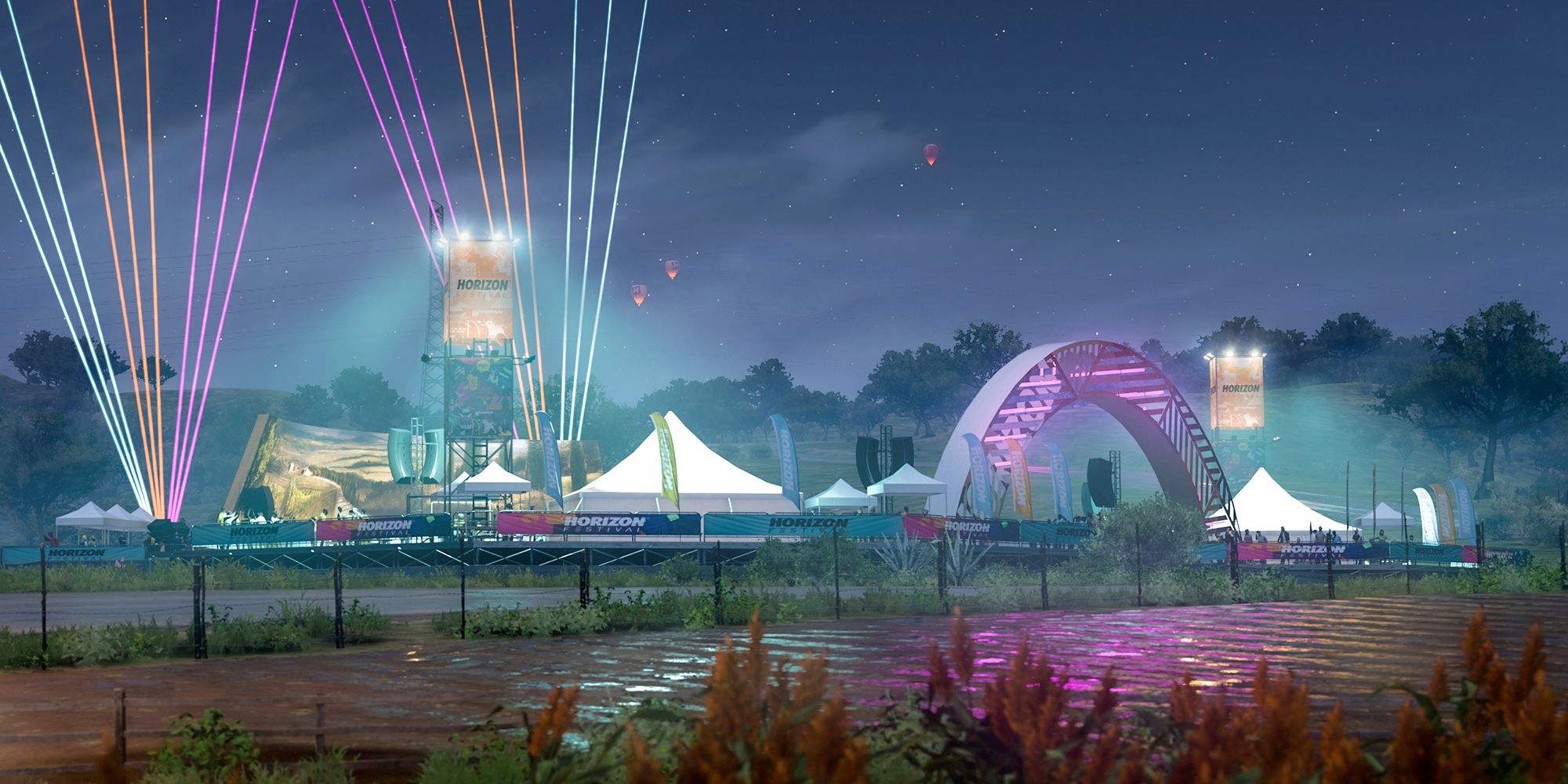 All those festival officials, organisers, mechanics, and so on are actors too. That's why they smother you with unending positive affirmations, even when your driving is below average. If they dared tell the truth, rightfully criticising your mediocre abilities, you'd have them fired or maybe even killed, depending on how evil you were. Rich people love surrounding themselves with yes men, and that's what's happening here. Deep down they probably hate you with a passion, but they wouldn't dare say it to your face. They fear you too much.

Your character even controls the media. That's why the game's radio DJs are forever heaping praise on you and your exploits. Amy from Horizon Pulse might sound sincere as she tells her audience about how wonderful you are, but she's cashing a cheque just like everyone else. This whole festival is really a monument to yourself, like Andrew Ryan's Rapture but with more drum and bass. It's one enormous lie and everyone knows it—especially you. Eventually you'll realise how hollow the illusion you've created is and fire everyone.

When you think about it, the whole Forza Horizon experience is a fragile billionaire's ultimate fantasy. Spend all day driving expensive cars surrounded by people smiling and nodding at everything you say, and bask in unearned glory. I highly doubt developer Playground Games had this in mind when they came up with the festival concept, but it's my headcanon now, and it makes the game's irritatingly twee tone somehow more bearable. When I win a race, it's not because I earned it: the other drivers were paid to lay off the accelerator.