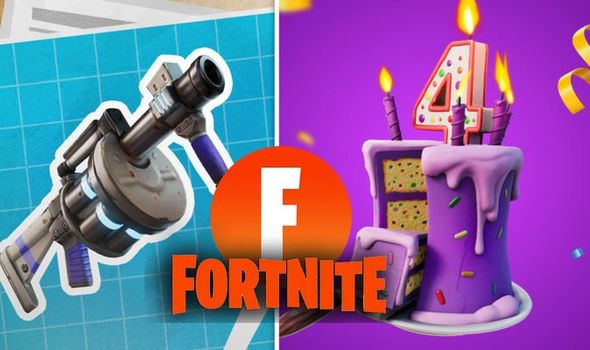 The new Fortnite update adds a couple of new features, and lays the foundation for the game’s fourth Birthday event.

Fortunately, despite one or two big additions, the new Fortnite update doesn’t require any server downtime.

Instead, fans can download the update and start playing once it has been installed.

According to the patch notes, one of the headline new additions is the return of the Shockwave Grenade and Rift to Go, although one item will be vaulted based on popularity.

“I’ve dug up schematics for new, powerful tools — and some old favorites — to strengthen your arsenal,” reads a Fortnite post.

“Only problem is, I don’t have the production funds. This is where you come in. Donation Boards are set up at POIs for you to chimp in Bars towards which item you want to see as future loot.

“First item to hit 100% Funded is immediately unlocked and ready for use. Our first face-off is against two masters of mobility: lob away and bounce back with a Shockwave Launcher or take to the skies with the Rift-To-Go.”

Another handy new item is the Armored Wall, which will provide players with extra cover during the late game.

The Armored Wall can be bolted to existing buildings to increase its HP and make players harder to kill.

“War means it’s time to reinforce, which is why I’ve bolted together the Armored Wall. Give any building piece a whole bunch more HP by putting this barrier on it.

“You can also build pieces with Armored Walls automatically attached. No matter how you go about it, it’ll be a LOT tougher for the enemy to reach you if you surround yourself with ‘em.

“The Armored Wall is technically considered a Trap, probably because it’s a time sink to try to break one.

“Starting at 9 AM ET, I’m placing these fortified fixtures in Supply Drops and scattering ‘em on the ground — pick some up for extra defense! (For when you’re outside The Sideways, of course…)”.

From September 24 until September 28, players can eat Birthday Cakes for Health and Shield.

Birthday presents will also be available across the map, complete with high-level loot for players who break them open.

“The Presents won’t be the only gifts at the party. For completing birthday Quests, you can unlock the cake-based 4 Me Back Bling, cake-on-a-stick Hooplah Hammer Pickaxe, and cupcake 4? Score! Emoticon!

“Like the Birthday Cakes and Presents, these Quests will be live from September 24 at 9 AM ET to September 28 at 2 AM ET.”