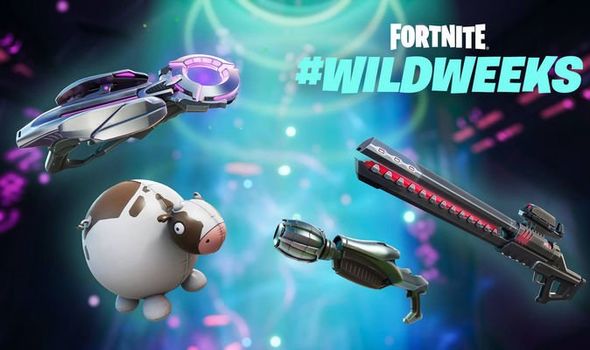 UPDATE TWO: Patch notes for Fortnite update 17.50 have been released by Epic Games.

The Fortnite update 17.50 patch notes were revealed in a post by Epic Games.

Here’s what the patch brings to the table…

Starting this Thursday at 10 AM ET (don’t ask how we know the specifics), Alien and IO tech will be easier to find than ever. In fact, Abductors will ONLY carry the Kymera Ray Gun, Grab-itron, Prop-ifier, and Alien Nanites. Likewise, IO Chests will ONLY give the Pulse Rifle, Rail Gun, Plasma Cannon, and Inflate-A-Bull.

The Aliens and IO actually produced so much stuff that they’re running out of space. As a result, you’ll find the Kymera Ray Gun, Pulse Rifle, and Rail Gun even in normal Chests now.

While you’re using a bunch of Alien and IO weapons, earn XP in the process! This week will have two Legendary Quest chains: one for dealing damage with Alien weapons and one with IO weapons. Choose either one — or go for both!

Our research shows that one Wild Week remains after “High Tech Hijinks.” Expect all the details in a future memo.

DISCOVER GAMES IN A NEW WAY!

If you’ve already opened the game after v17.50’s release, you probably noticed the playlist menu looks a lot different! With v17.50, we launched a new and improved way to discover games and experiences in Fortnite. Jumping into classics like Solo, Duos, and Squads is as simple as ever, but discovering other games or experiences that suit your tastes — whether made by Epic or the community — has never been easier.

With new additions like categories and tags, find exactly the kind of game or experience you’re looking for. And with the new “My Library,” jump into ones you favorited or played recently.

MOTHERSHIP ON THE MOVE…

Fixed an issue involving being unable to use inventory items after swapping from a Prop-ifier to a Consumable.

Please note that the High Tech Hijinks Wild Week will not apply to competitive playlists.

Soon after Fortnite servers went down Epic Games revealed one thing Fortnite update 17.50 will be bringing to the table.

Discussing the new reward, Epic Games said: “On August 31 (with the release of the v17.50 update), we’re launching an exclusive new reward for Fortnite Crew subscribers: The Fortnite Crew Legacy Set! This Set includes a Back Bling and unlockable Pickaxe, each an evolving memento of your Fortnite Crew membership.

“For every month you’re an active subscriber, you’ll unlock a new Stage of the Legacy Set for up to six total Stages. The Stages unlock on the 14th of each month during your subscription (at 8 PM EDT / 7 PM EST).”

ORIGINAL: Fortnite update 17.50 is expected to launch this week.

The final patch before the Fortnite season 8 release date could be launching on Tuesday August 31.

And ahead of official confirmation about the 17.50 download fans have found out what the new Fortnite patch could bring.

The biggest rumoured feature of the Fortnite 17.50 update is the addition of a new Kevin the Cube event.

Long time Fortnite fans will recall the Cube was a major part of Fortnite chapter 1, featuring prominently in season 5 and 6.

And it’s rumoured Kevin the Cube will be returning at the tail end of Fortnite season 7, and the Cube’s comeback will be linked to the Fortnite chapter 3 storyline.

This rumour has been circulating for some time now, and was outlined in a wide-ranging leak that revealed the Ariana Grande event well before it was officially announced.

This leak was previously highlighted by notable leaker ShiinaBR who posted: “RUMOR: 15 hours ago, a post was published by a moderator on the subreddit r/FortniteLeaks claiming to have insider information about upcoming things in Fortnite.

“The source who provided the insider information apparently leaked a LOT of information about Season 6 correctly.”

The leak, among other things, claimed Kevin will return towards the end of chapter 2 season 7 and the Cube will be controlled by a new unknown Queen character.

This character is allegedly linked to the Fortnite chapter 3 storyline, and it’s claimed this brand new chapter of Fortnite will see a new map launched.

Elsewhere, Fortnite 17.50 could see the Coral Castle POI get abducted – with the Corny Complex abduction allegedly next up.

New weapons could also be added with Fortnite update 17.50, with a charge sniper weapon potentially heading to Battle Royale soon.

The new Fortnite update could also add new skins, with Chris Hemsworth reportedly the focus of the one of next inbound cosmetics.

Hemsworth’s character Tyler Rake from Netflix action film Extraction is heading to Fortnite, according to leaks. It will follow another action hero from the big screen – Will Smith’s Mike Lowrey from the Bad Boys franchise – getting a Fortnite skin.

Elsewhere, the Fortnite Trello board has revealed one new fix that will be coming in Fortnite update 17.50.

The issue is “losing item functionality after swapping from Prop-ifier to Consumable”.

Describing the issue, the Fortnite Trello board said: “Players may be unable to use the items in their inventory (including their Pickaxe) after swapping from a Prop-ifier to a Consumable item.”

If Fortnite update 17.50 is out on Tuesday then Battle Royale fans can expect a period of server downtime beforehand.

This patch is set to be the final major update ahead of the Fortnite season 8 release date.

The new Battle Pass is expected to launch the week beginning Monday September 13.