You are here:
Home / Forspoken Preview

Exploring the world of Athia in Forspoken comes with its fair share of perils. I came across a white bear-like creature that stood out from the crowd of dark beasties roaming the land. Thinking I’d be able to kick its butt quite quickly, I charged in. I was wrong. I ended up legging it away with a sliver of health left, and it wouldn’t be the last time I wimped out of a battle during my time with Forspoken.

What makes Athia particularly enjoyable to explore is the magic parkour and combat system that Forspoken allows players to wield. Swiftly running over the terrain, vaulting over walls, and scaling buildings has never felt more satisfying. It’s all so effortless and fluid, and despite being entirely magic-related, it feels so natural. Of course, you have limits to your stamina, but later upgrades can help you maximise your abilities further.

Combat feels similarly fast-paced and exciting as you’re flinging spells and dashing out of the way of flailing dragon limbs, but it’s also all too easy to feel overwhelmed. The first little boss battle that tested my mettle was manageable enough with the few spells I had to pick from, but by the time I was trying to take down the fearsome Tanta Sila, I was lost in the large repertoire of spells I had at my disposal. The team promised over 100 spells would be available, and the thought of that scares me. 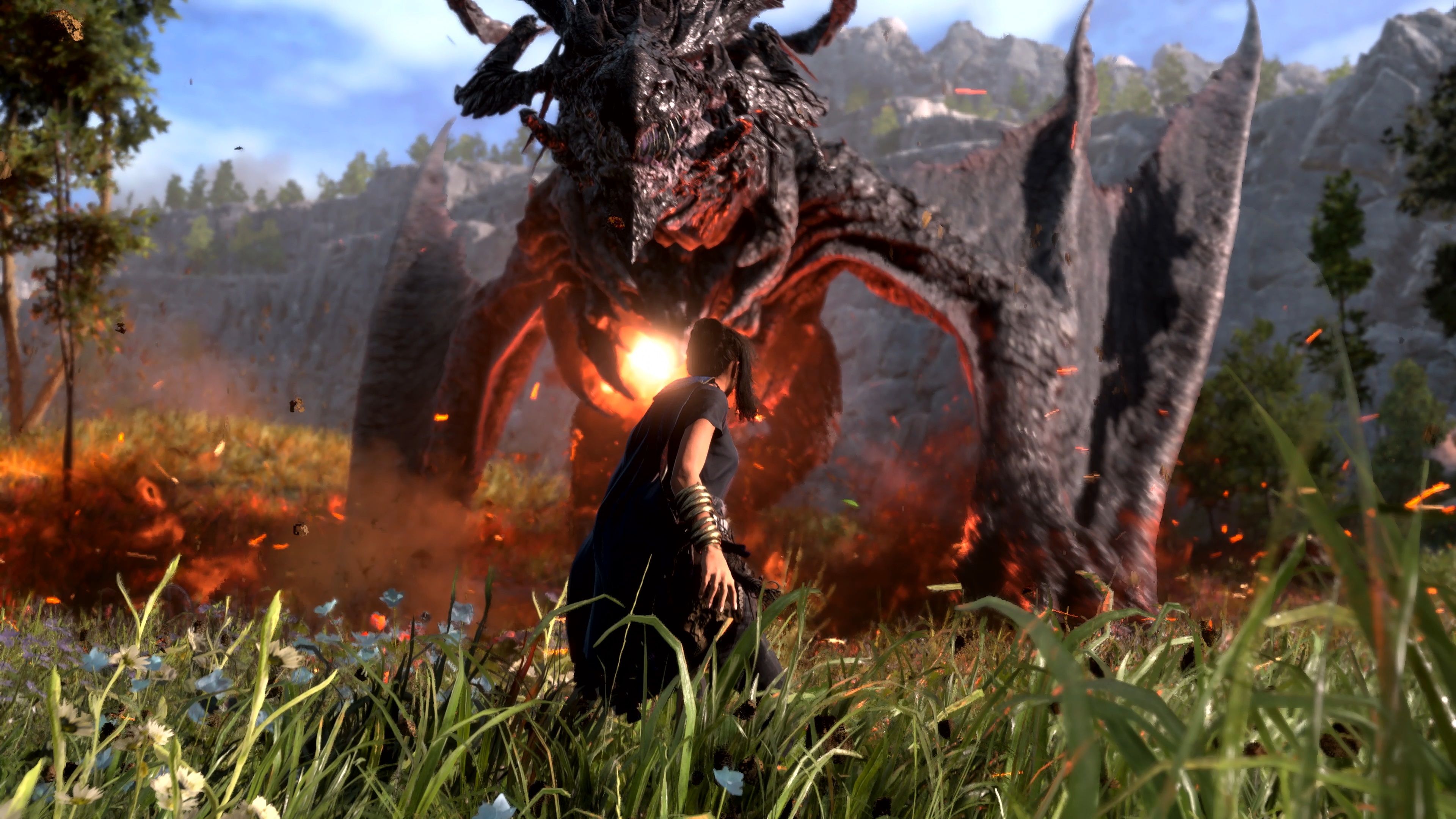 The core mechanics of combat felt fun, if you manage to get your head around (or ignore) the extensive ability list. You can charge your spells to pack a bigger punch, but it feels more natural to rapid-fire them while constantly moving to avoid getting hit yourself, and it’s really the fast-paced nature of battle that makes it feel satisfying.

To experience the Tanta Sila boss battle, I was thrown into a later part of the game with a range of spells I hadn’t earned myself or had the time to learn properly. I imagine progressing naturally and learning the ropes bit by bit will help, but the extensive list of spells was intimidating and unfamiliar for me. I found the combat challenging, which isn’t a bad thing. Who doesn’t love a challenge? There are difficulty options for a reason if you want to change it up, and by the time I had to face Tanta Sila, I wished I had.

Admittedly, I didn’t help myself. As we had limited time with the game, I raced to the boss battle in the final section and, in doing so, neglected to stock up on some potions. As a result, I found myself stumbling to get to grips with my arsenal of spells and failing to gain the upper hand in a battle where I had few resources. 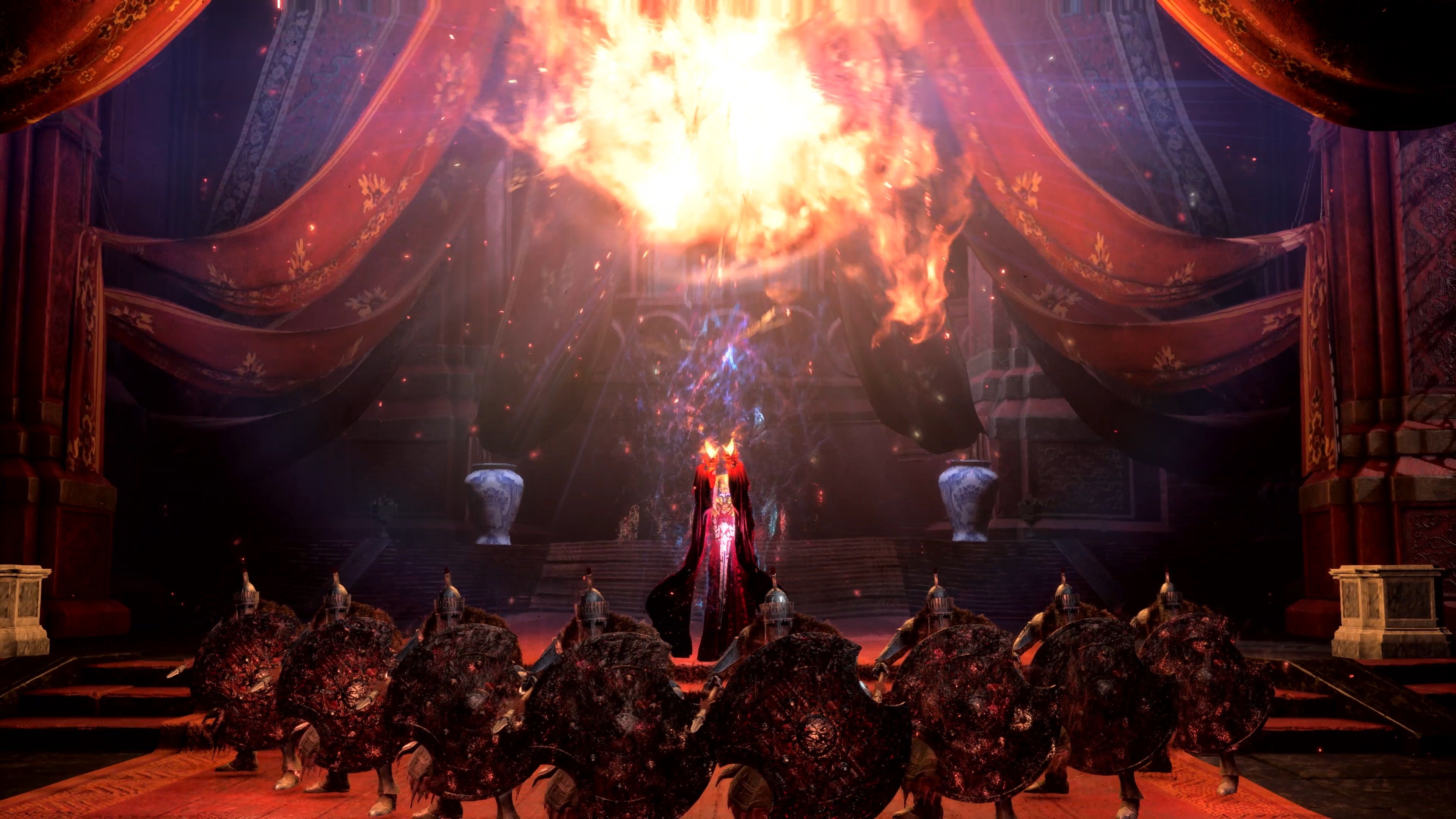 Hacking away at a large HP bar is monotonous, but there are a variety of stages to mix it up too. Fortunately for me, should you fall in battle, you restart from the last stage checkpoint you reached. I didn’t want to reload my last proper save and go back to the beginning of the whole area just to grab potions as I was running out of time, but unfortunately, you can’t change the difficulty mid-battle either.

I flipped on almost every helpful configuration I could, auto-dodge, enemies deal less damage, you name it. I still failed miserably, and embarrassingly had to ask for help. The first thing they did was go into the menu and change up the equipped spells. I guess that’s the beauty of knowing the game much better than I did.

The game looks great, there’s no denying that, and the characters and premise are certainly intriguing. Mostly. Frey and her backstory feel like a tired trope, the typical misunderstood young woman who’s found herself on the wrong side of the law, and so she has that ‘I don’t give a shit about anyone else because no one gives a shit about me’ attitude. She’s not immediately likeable, and often comes across as too harsh to the characters she meets. She grows on you somewhat, but mainly because of her comedy-duo setup with Cuff, and I can already foresee that her character will soften as you progress, as the people of Athia will make her care about things once again, and she’ll stop being selfish. 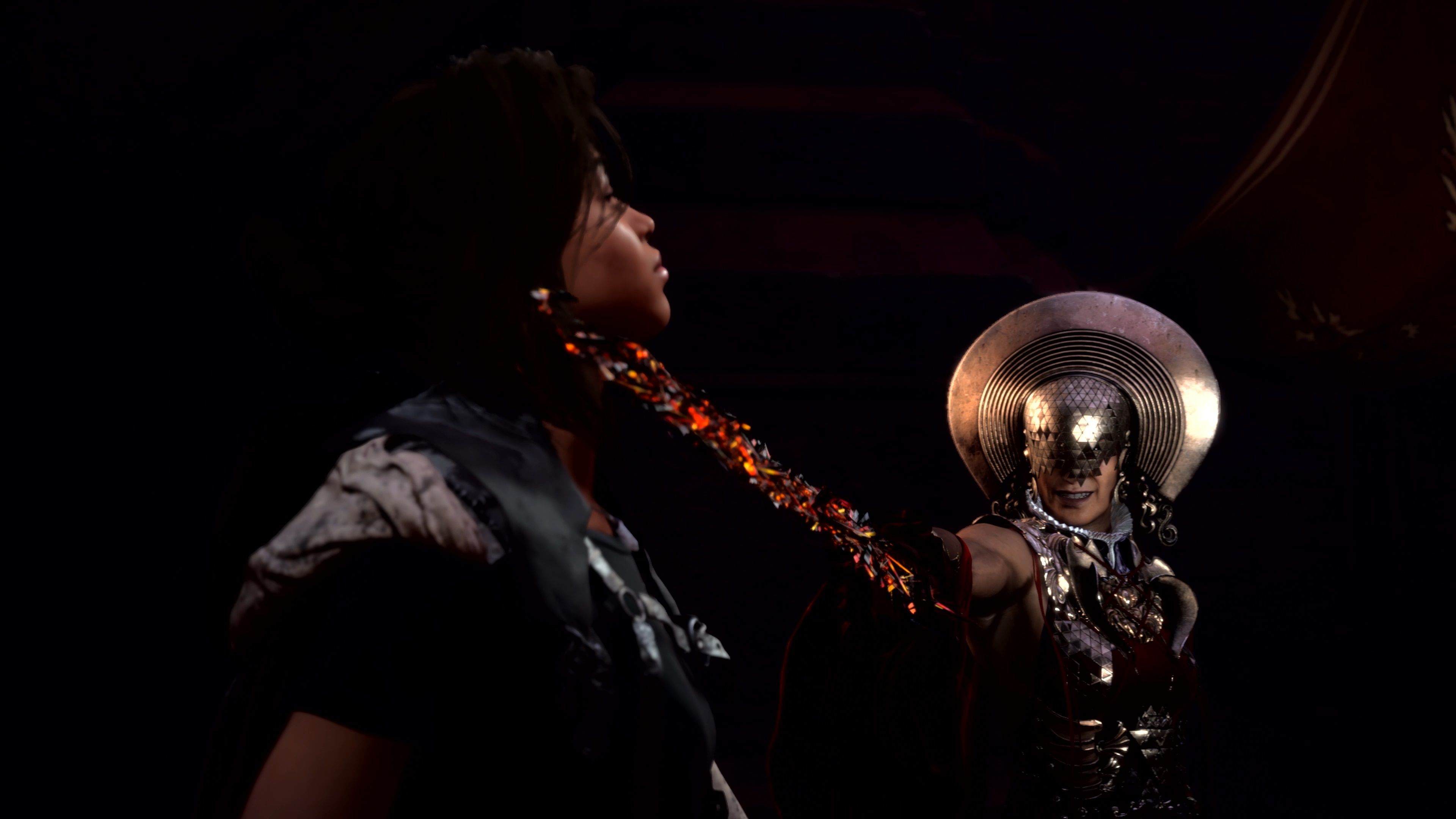 Despite some cheesy lines and moments, the companionship between Frey and Cuff was endearing at times. It’s Cuff who makes Frey better. Without him, the game would have a lot less personality. A reluctant, brooding hero paired with an inanimate object character that specialises in dry humour, sparring with snarky words and jokes as they travel through a world fighting a dark corruption. It’s Nier and Grimoire Weiss – not the most original, but we’ve seen it work before.

Frey and Cuff’s quippy back and forth was fine (despite trailer controversy), while I raced from story point to story point. As I spent much of my time watching cutscenes, the filler character dialogue that occurs during combat and exploration wasn’t overkill for me. Though I do wonder if their chatter will become particularly tiresome at launch when I’m not racing through cutscenes that break up the commentary.

The world of Athia is suffering from a strange force known as the Break, while the four powerful magical matriarch Tantas that once protected the land and people are now seemingly corrupted. Things are bleak, to say the least. The juxtaposition between Frey and Cuff’s humour with the world around them isn’t as jarring as I first thought it would be, but it’s still very noticeable. I’ll reserve final judgment on that when I play the game properly, as only seeing certain chunks of gameplay gives a limited view. 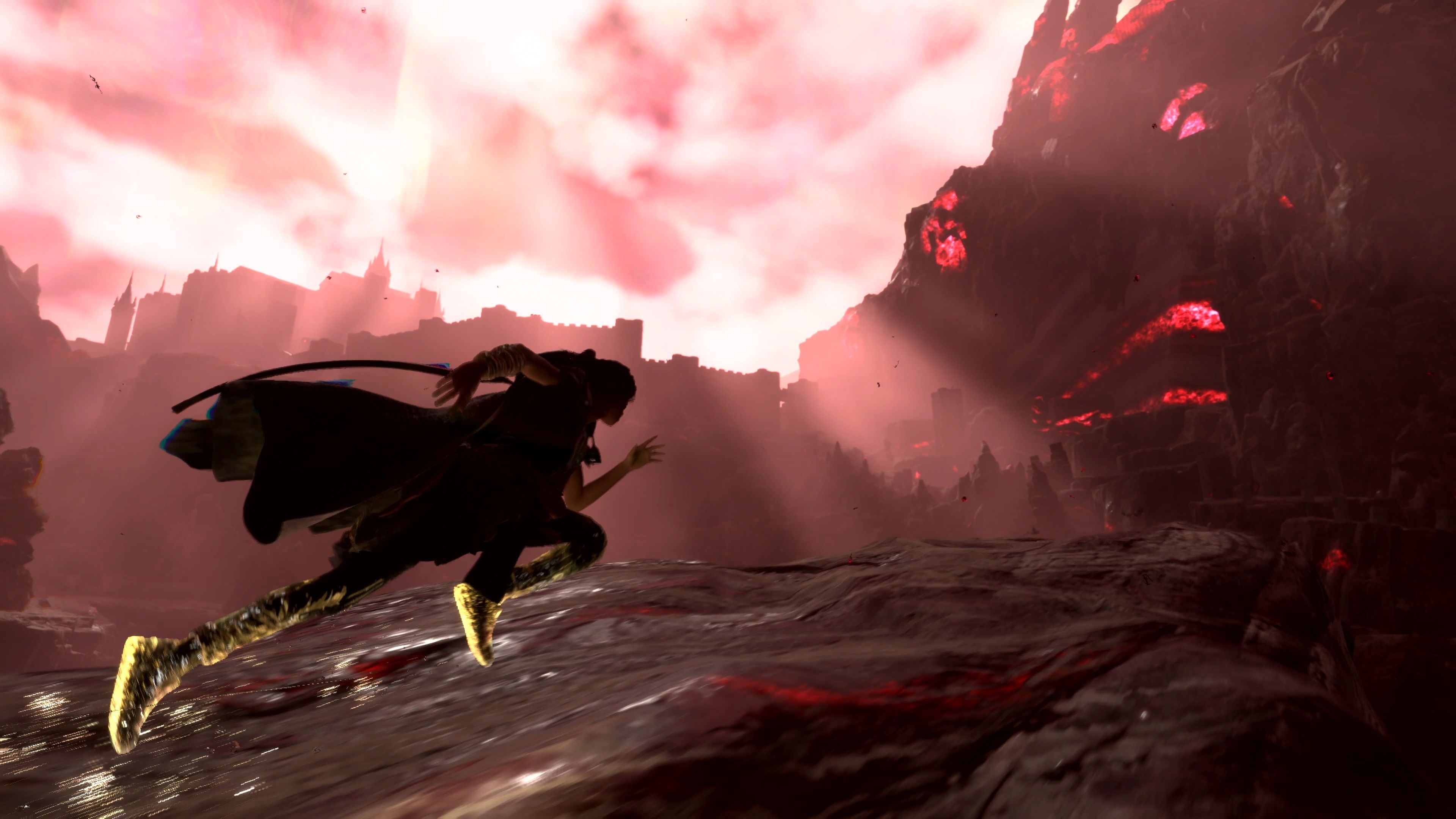 I wish I hadn’t simply shot for progression just to get to that final boss scene, as the part I enjoyed the most about Forspoken was the side content. There seemed to be a wealth of it, but I barely scratched the surface. As well as side quests and optional labyrinth dungeons, for those who really go out of their way to explore, there is also lots of additional lore to find. As the world-building was part of what intrigued me the most, I wish I had dug deeper into that.

I also had some time dabbling with the crafting system, but not as much as I should have. Between the spells, crafting, and the nail customisation, it was a lot to get my head around in a short time. Despite initially cringing at the idea of the female protagonist getting to change up some of their stats by changing their nail polish, it’s not quite as terrible as it sounds. You learn that it’s a trait the Tantas use to amplify their magic, and given their unique looks, it feels right for them. Frey is just adopting this for her own needs, but let’s face it, this would never happen with a male protagonist.

The magical parkour in Forspoken is a joy, and the world and premise are quite captivating. I worry that the oversaturation of spells might be too much to handle, and I’m still not completely sold on Frey. My time with the game certainly made me want to find out more, at least about Athia and the Break, and I definitely want to just let loose in a world where I can run like the wind. Whether the other aspects of the game will deliver at launch to make Forspoken as groundbreaking as the team wants it to be, remains to be seen.