I’m glad Star Wars Jedi: Fallen Order is getting a sequel. It was a good game. I liked it less than most, but still enjoyed spending time with Cal Kestis, customising my lightsaber, and slicing Storm Troopers from Huyton to New Brighton. Or from Hiitun to Mos Brytin I guess.

Star Wars games vary greatly in quality. Some, like the original Battlefront II (not to be confused with Battlefront 2) are classics up there with Halo 3 and Modern Warfare 2 known for their endless selection of multiplayer memories. Others make you wince at the thought of them; did you remember The Force Unleashed had a sequel? If you do, it’s likely you’re getting flashbacks to recycled Kamino levels rather than remembering the Force powers that didn’t feel anywhere near as exciting as in the first game.

Most, however, fade into obscurity. Dark Forces is criminally underrated and often forgotten, and Republic Commando added a surprising amount of depth to the first person shooter genre. Squadrons works amazingly well in VR, but is a bit average when played via traditional means. While we’re on the topic of virtual reality, that’s where you can find the very best Star Wars game to date. 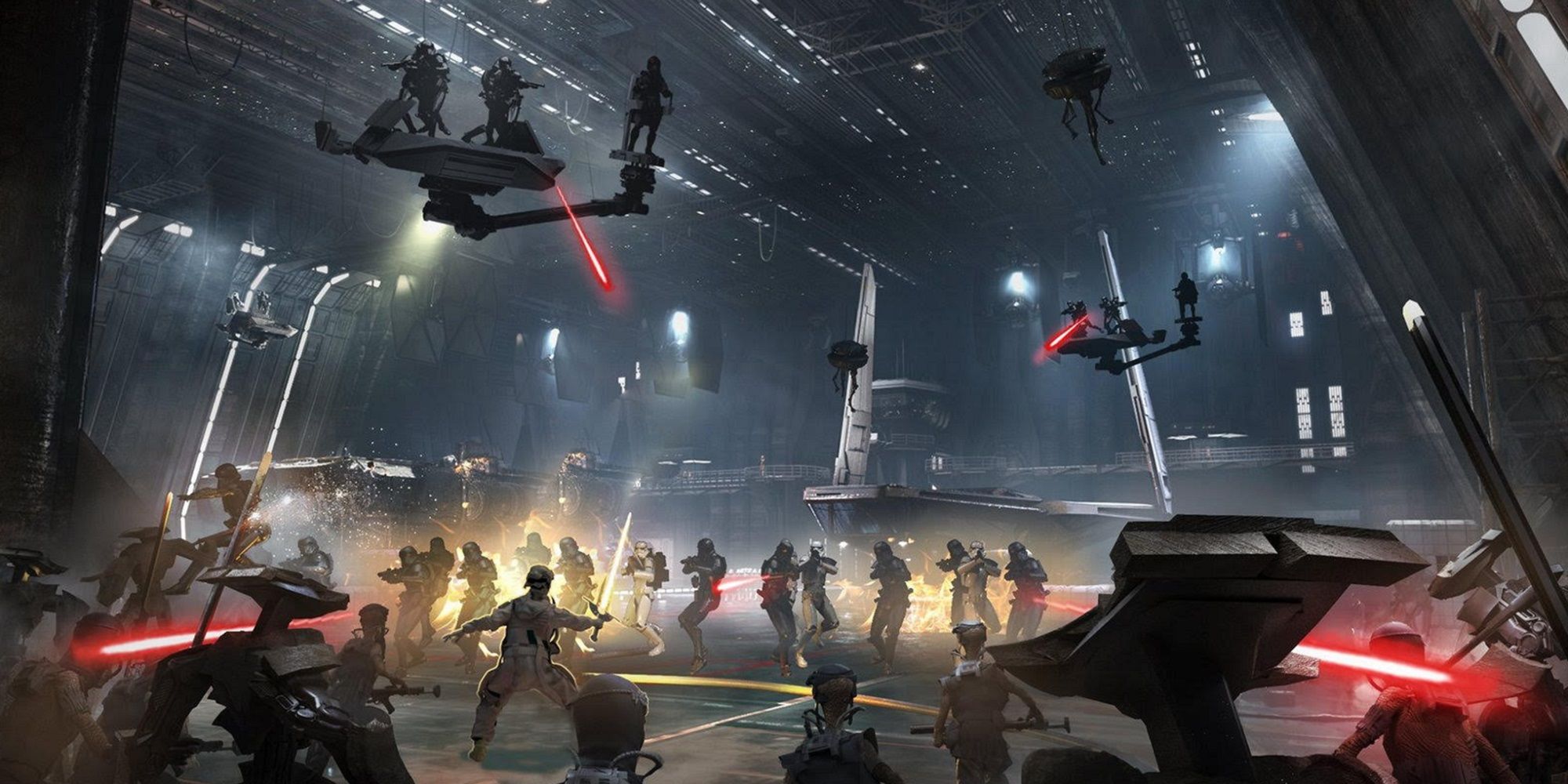 To be clear, Vader Immortal is more of an experience than a game. It’s also very short. You play the role of a smuggler who ends up wielding a lightsaber, fulfilling a prophecy, and mastering the Force. Darth Vader’s there too. But you’re not playing for the story. You’re not even playing for the mechanics, either. I’m not really selling this, but I’ve never felt more excited by the potential of virtual immersion than when playing Vader Immortal.

You can keep your Fallen Order Soulsborne stylings and Flight Sim-esque gameplay of Squadrons. Just put a lightsaber in my hand and let me get swinging. Most Star Wars games have a simple goal – to make you feel like a Jedi. Those that don’t, for the most part, want you to feel like a Storm Trooper or rebel soldier. And no game makes you feel like more of a Jedi than Vader Immortal.

Yes the movement possesses the weird floatiness that plagues many VR games, and no you can’t die –no matter how many times you’re hit by Storm Troopers. But none of this matters. Swinging a lightsaber to tear through a Troopers’ armour or collapsing a tunnel using nothing but midichlorians is nothing short of spectacular. Sure, you play as a Jedi in Force Unleashed and Fallen Order, but you become a Jedi in Vader Immortal. 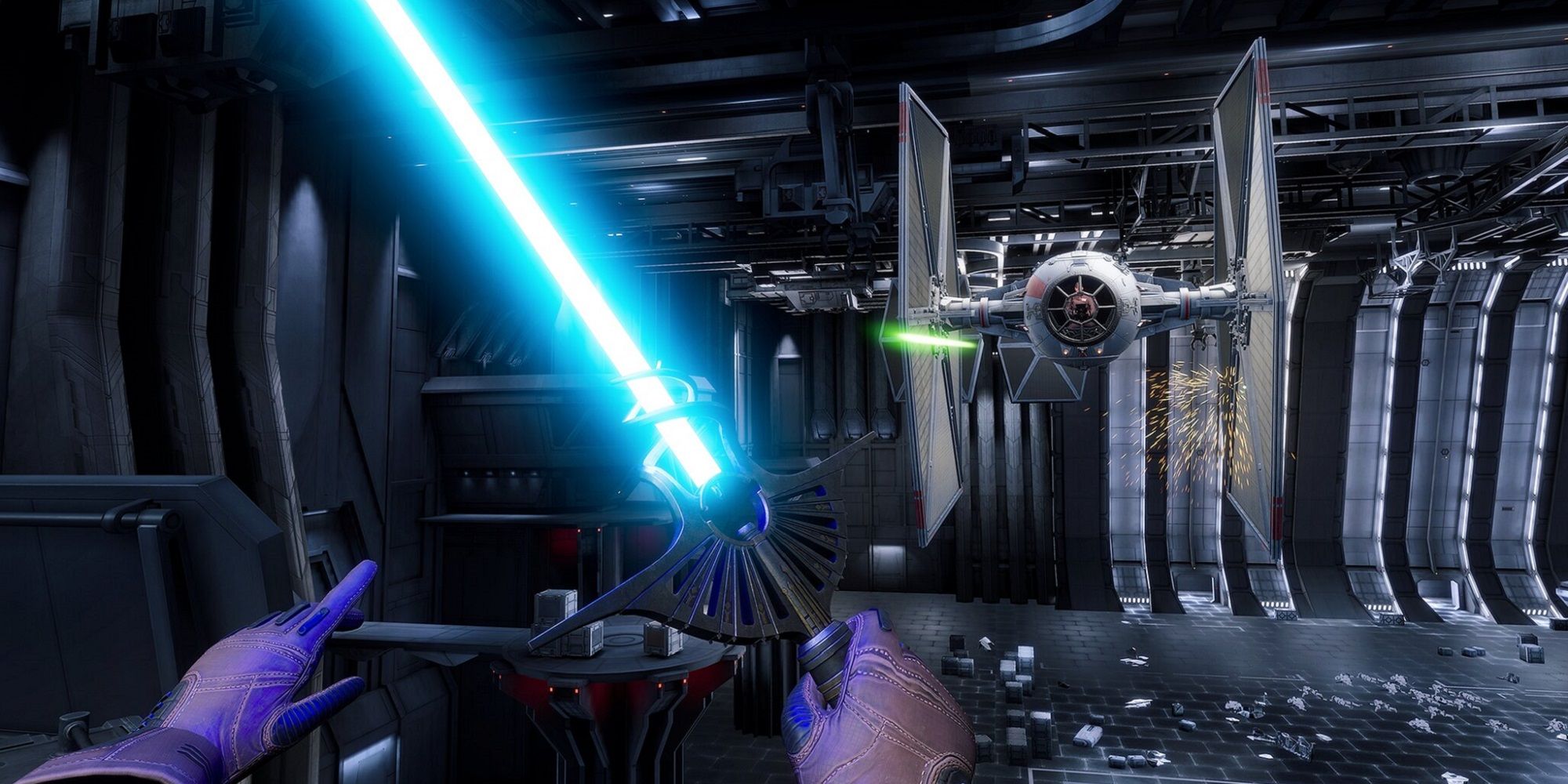 A lot of this comes down to the nature of VR. When you look around and see the entirety of an Imperial starship sprawling in every direction, it’s undeniably impressive. When you can duck and dodge incoming blaster fire before parrying shots with your lightsaber and unleashing a volley of your own, it feels better than any button combination could ever dream of.

However, there’s more to Vader Immortal than just being a technical showcase to show off the abilities of the Oculus headsets. The tactile feedback of every action in Vader Immortal is perfected, from pushing the lever to take your ship into hyperspace in the very first scene, to clicking little buttons, to swinging your lightsaber and using the Force. These little touches are rare to find outside of the PS5’s DualSense (especially as I mostly play games on my PC with keyboard and mouse), but transport you right into the world, headset or not.

If the short story isn’t enough for you, the Dojos offer something different. Use the Force and your trusty saber to take out waves of enemies in a manner not dissimilar to Luke donning the blackout helmet and sensing the position of the drone when he undertakes his training. Whether you’re fighting drones or bats or anything else, however, there’s hours of fun to be had living out your Jedi fantasies in saber-swinging Dojo challenges.

Vader Immortal may not be your favourite Star Wars game – hell, it might not even be a Star Wars game, depending on your definition – but no other game transports you into the body of a Jedi (or Force sensitive smuggler, whatever) in quite the same way.