Once you complete Floppy Knights’ second chapter, you will unlock a bunch of extra Challenges in the Challenge Zone. These are more difficult than the Challenges you faced before, and require more brainpower to solve. As was the case in the last tier, these largely build upon the ideas brought about in the previous chapter.

Boomerang Barrels, is as the name implies, all about Barrel Cacti and Chuckies (the guys who throw boomerangs). This Challenge is difficult for several reasons, RNG sometimes being one of them. It may take a few tries to get through it, and even when you do, it might be tight. 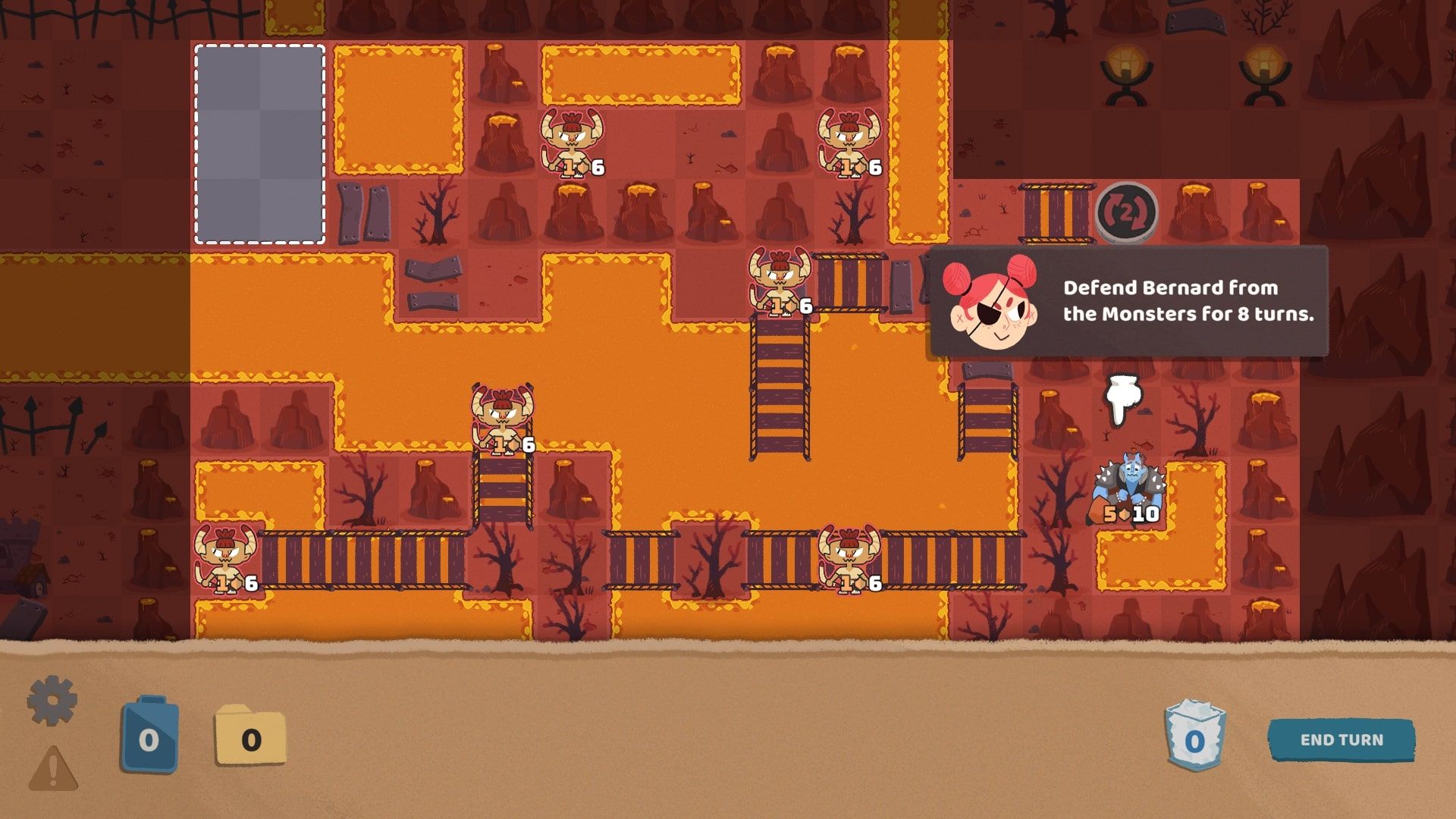 To beat this challenge, all you have to do is keep Bernard alive for eight turns. Preventing you from doing that is a horde of displacing Chuckies, and copious amounts of lava. Unlike regular missions where lava can always be avoided, in Boomerang Barrels, you are forced to walk through it multiple times. 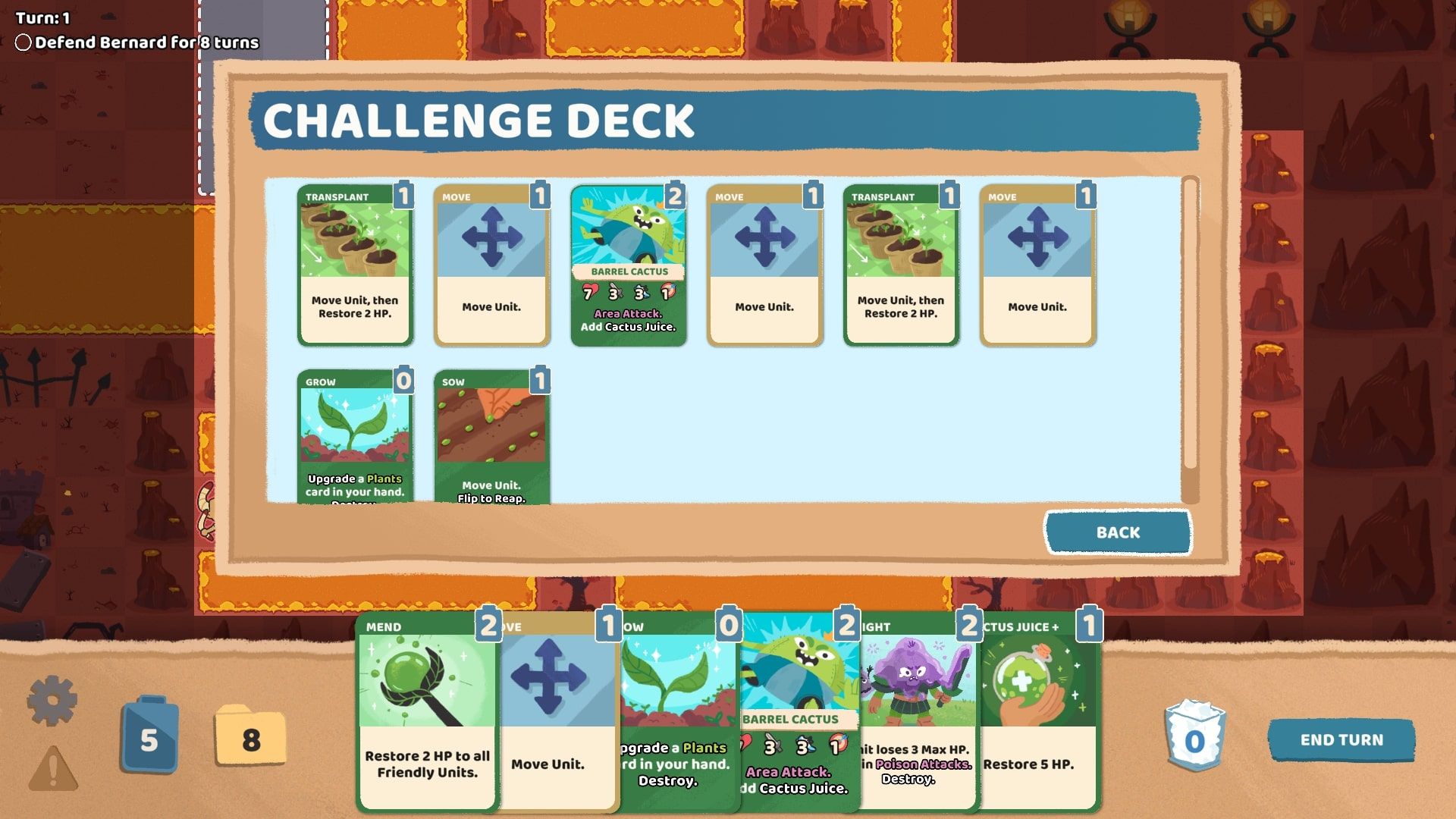 For this Challenge, your deck is focused entirely on Barrel Cacti. This unit is fairly weak in terms of attack, and, well, they are not particularly fast. This can be a problem in a mission designed around getting somewhere with haste. There are a few tricks to the deck, however.

Right off the bat, there is a problem with this deck – a lack of attack cards. This makes target priority more important than anything else, as you don’t have the resources to just kill everything that moves. This is especially true when you consider how tough Chuckies are (more on that in a bit).

Barrel Cactus is a great card in the right situation. Despite the lack of movement and damage, Barrel Cactus is perfect for this mission simply because they have a lot of HP. Your Commander has nine, whilst the regulars have seven but can be upgraded with Grow if you like.

The idea is to use your hefty frame to move through lava, heal up, and quickly assassinate a priority Chuckie. You are not going to kill everything, but you are going to kill the enemies in your way.

Sow/Reap is the most important card in this deck and it needs to be upgraded with Grow as soon as possible. You could argue that restarting the level until you have both of these cards in hand is a valid strategy. Sow/Reap upgraded will increase your Barrel Cactus movement by one, as well as increase their damage by one.

This increase in damage is not to be underestimated; it turns a three-hit kill into a two-hit kill. Being able to kill efficiently will go a long way to beating this Challenge. If you get this combination off, you can kill a Chuckie Turn One, and this makes pushing to Bernard much easier.

Mend is a decent card that might find some use if you are desperate for HP. Your Cacti will take a lot of damage in this Challenge, and having a way to globally heal them for 2HP is nothing to scoff at. The issue is that it costs 2 Energy to use, which is substantial. This is more of a clutch heal than a reliable “must use” option.

Blight is a trap, and it could never be used. Poison Attacks might seem like a good idea, but Blight drains your Max HP to use. Even upgraded, this card drains too much Max HP and it is simply never worth it. Treat it as a dead card in your hand, because all it’s there to do is clog up your deck.

This is your go-to burst heal. A standard Cactus Juice will heal you 3HP and then get destroyed. Cactus Juice+ heals a whopping 5HP and does not get destroyed on use. You can’t use this on Bernard, but you can use it to keep a Barrel Cactus alive long after they should have died.

How To Kill Chuckies Effectively 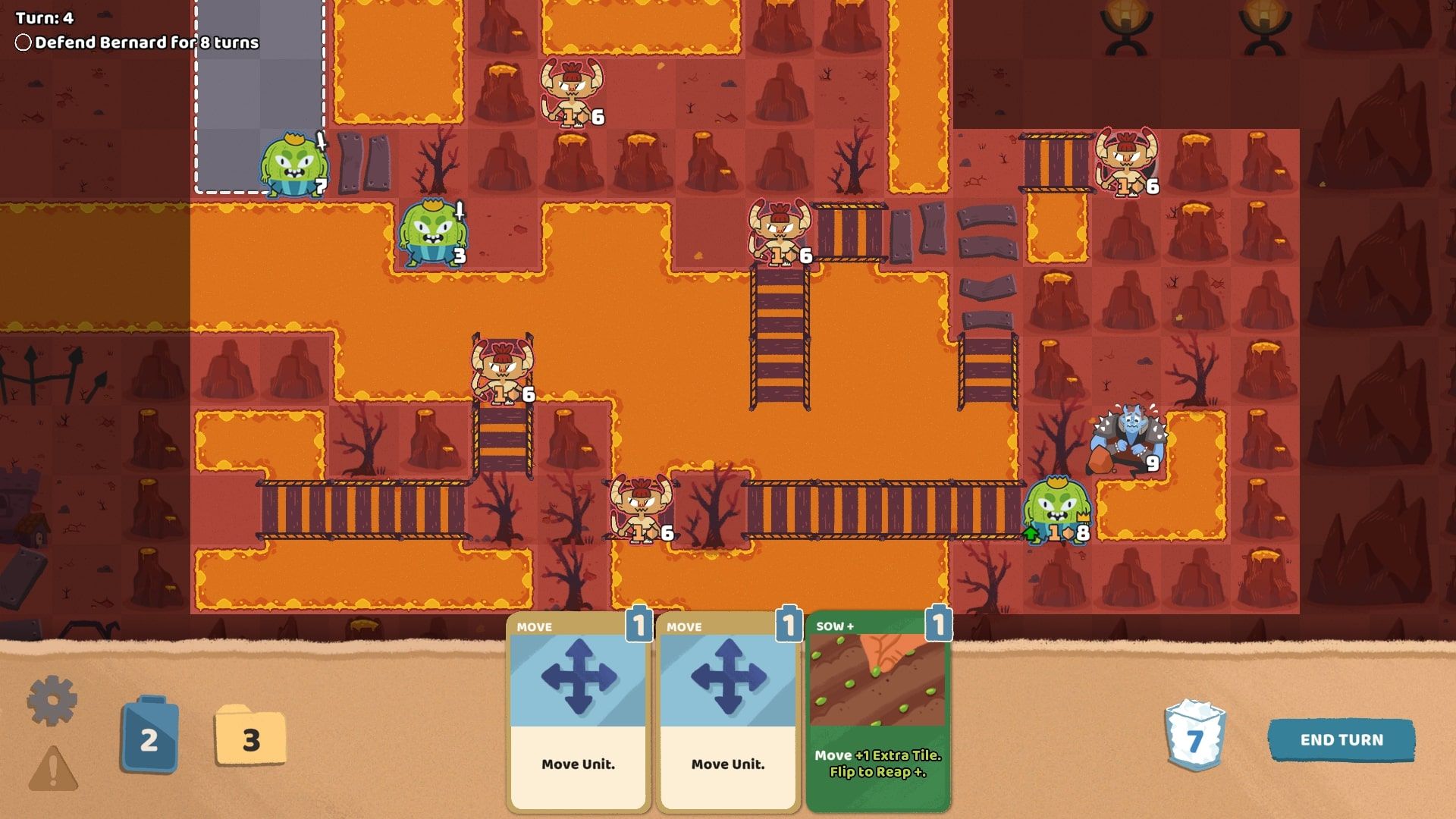 Chuckies are a nightmare to kill – at first glance.

They have just enough HP to make them awkward to kill, they have incredible range on their attacks, and they can bust down your commander very quickly if you are out of position thanks to their built-in Pull Attack. You will be pulled into the lava if you aren’t careful. One Chuckie pulling you into lava will deal six damage.

To kill a Chuckie, you need to use Grow on Sow/Reap. This will give you the option to attack twice – a feature this deck otherwise lacks. The Reap attack, however, will deal 4 damage, not 3. Attack normally, use Reap, and the Chuckie dies. Simple as that. 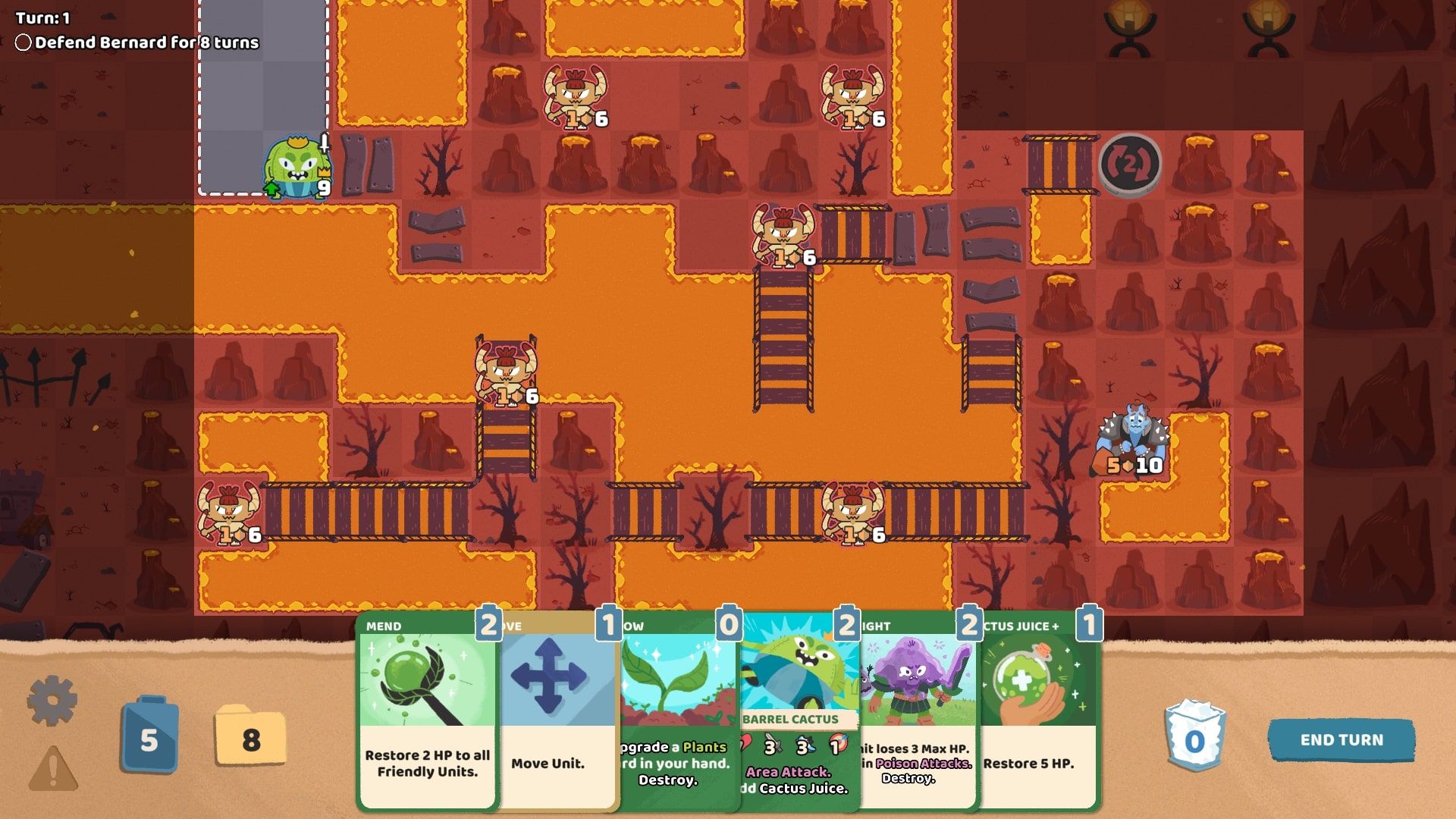 Deployment is going to be simple. You need to deploy your Cacti as close to Bernard as possible. Because Barrel Cactus is an expensive unit to summon, it’s best to just stick with your Commander on turn one and use your Energy for an alpha strike. 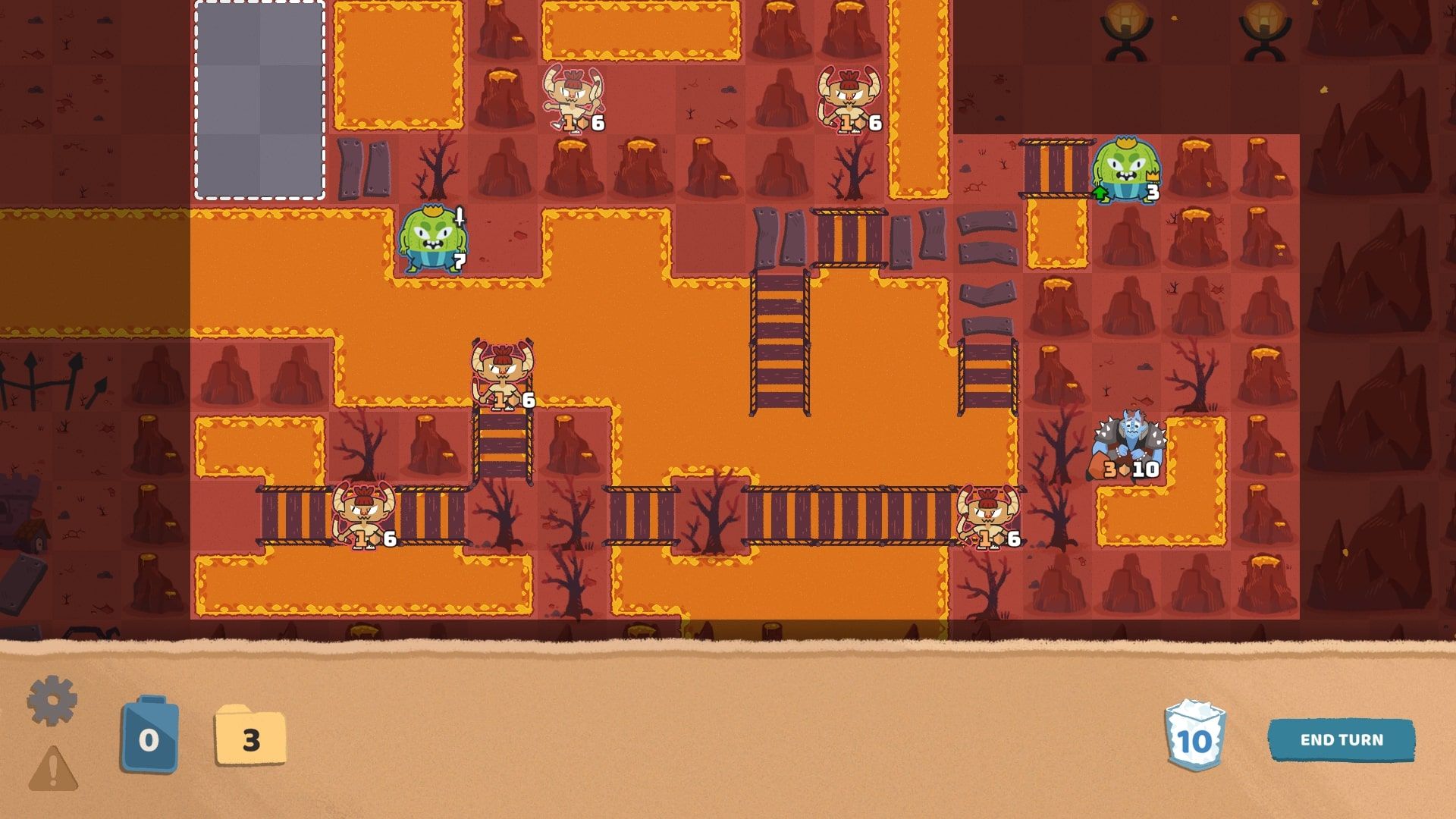 The key to this Challenge is speed, precision, and a little bit of luck. This deck, more than any other deck so far, can let you down to the point of defeat. If you don’t pull a heal, movement, or attack card when you need it, the setback can very easily cascade into a loss.

That being said, there are ways to help mitigate that, and that’s just going in with a sound strategy. Firstly, you have two objectives – although only one is tracked and a real objective. Your first goal should be to push through the closest Chuckie and make your way towards the Spawner at the top right.

To accomplish this, you will need access to Grow and Sow/Reap in your starting hand. If you don’t have these, then you simply can’t kill the Chuckie and you are going to waste turns ineffectively attacking. We advise resetting the Challenge until you get that combo in your opening hand.

Once you have your Commander on the Spawner, you should be spawning in more Cacti. These won’t be as tough as your Commander, but if you have Grow in hand, then upgrading one of them is highly advised. Move your Cacti forward towards Bernard. You can also make a detour and kill the Chuckie that is near spawn and was supporting the Chuckie you killed turn one.

Once you have the Spawner locked down and the two Chuckies' near spawn ared dead(ignore the one behind the mountain), it’s time to move on towards Bernard. The best place to stand is on the trees facing the bridge. This will reduce the damage you take, and, since you are in line with the bridge, you won’t be pulled into lava.

If you get the opportunity to unleash a Sow/Reap combo attack, then do it. Providing the Spawner is blocked, the remaining Chuckies will struggle to get to Bernard, let alone kill them. They also can’t replenish their numbers, so every kill makes surviving that much easier.