You are here:
Home / Floodland Review – Keeping Its Head Above Water

Building a brave new world out of the ashes and flotsam of the old one is always going to be challenging, especially when you have to manage different worldviews, epidemics, and violent fish attacks. Still, Floodland makes it a task worth undertaking. Among the flooded ruins of our once great civilisation, a clan of nomads is seeking a power plant capable of transforming them from a ragtag group, barely scraping by, into the beginnings of a new, flourishing society. For the most part, Floodland confidently strides through the water, but several bugs leave it floundering.

Floodland places you at the helm of one of four distinct clans, each with differing takes on how to mold the new world to their whim. After tsunamis and climate change ravaged the Earth, some cling to the old world’s remnants as a coping mechanism, while others wish to evolve and not repeat the mistakes of the past. I went with the Fire Brigade, a liberal group that values freedom and tolerance above all else. The world may have gone to shit, but that doesn’t mean I’ll become a Tory.

The mood of Floodland, despite the doom and gloom of trying to start a new life on scattered, flooded ruins, is beautiful and hopeful. In-game writing reads like journal entries, hammering home the human aspect of the task at hand. This is a city-builder with heart, and those hearts can grow cold and rowdy if their needs aren’t met. 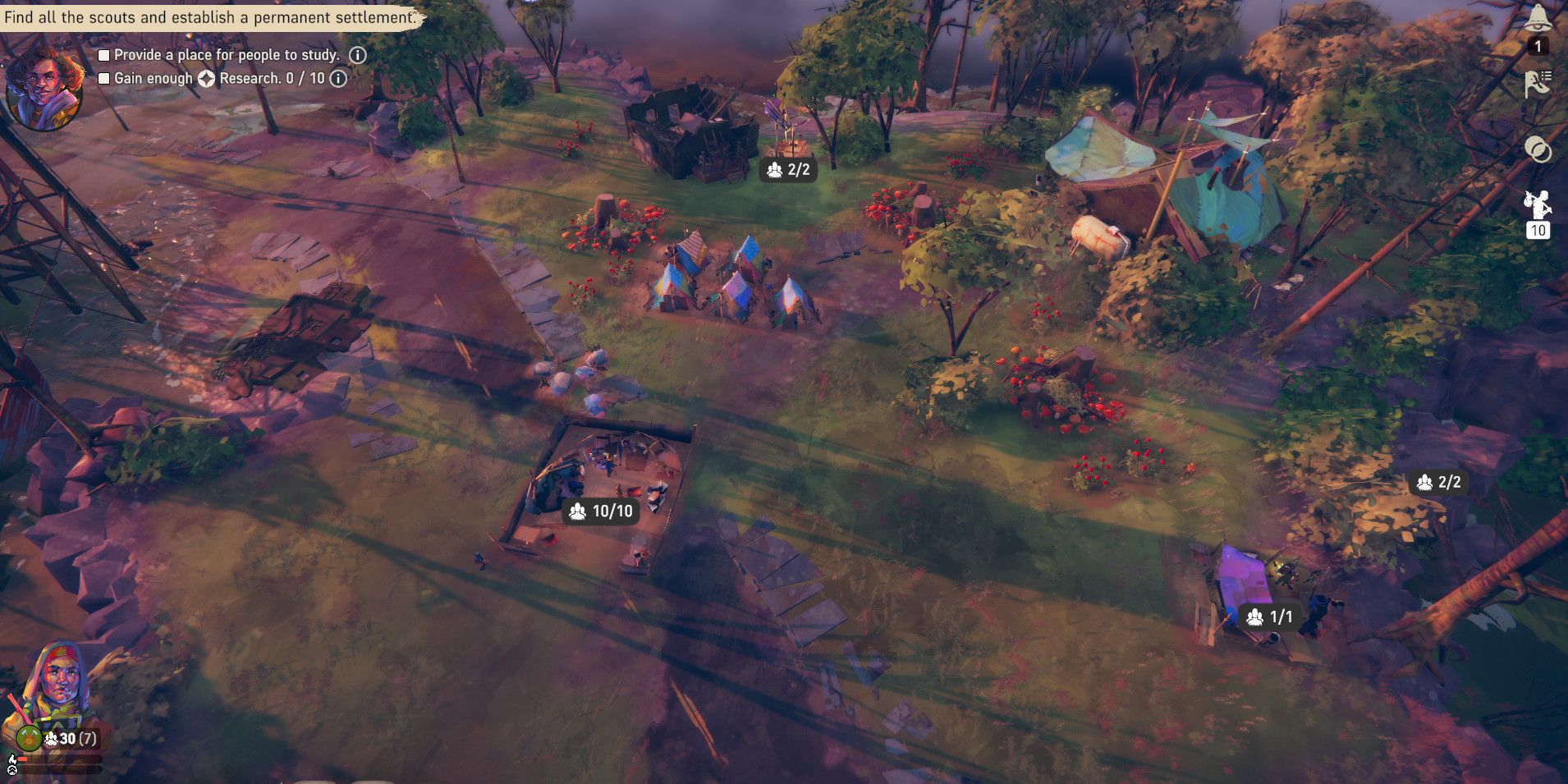 Unrest increases if there’s homelessness, famine, disease, or if clans aren’t happy with your leadership decisions. The game asks if you’ll sacrifice individual liberties for the greater good or if the world is even worth rebuilding if you can’t do it fairly. An unruly population leads to the theft of precious resources like building materials, food, and even research. The idea of people scurrying out of the storage yard at night clutching academic papers and textbooks is quite a funny one, but this leak can quickly become a stream of disruption that takes a considerable effort to plug.

At the start, people are easy to placate – just provide them with shelter, food, and water, and they’ll be happy. This ensures the start was simple while I got to grips with the basics, but once the story gets going and more people join, it becomes hard to manage different expectations. The ability to pass laws that open-up recreational buildings and assuage worries isn’t unlocked until after an illness sweeps through the community, a frustrating progress block. This was the first major test of my resolve, and one I struggled to recover from due to some unfortunate bugs that affected food production. The game doesn’t register the raw materials needed for kitchens and workers take long trips to the canteen in the middle of their shifts, so my food stores were never as high as Floodland’s info panel told me they should have been. This meant I was constantly on the brink of starvation, and once the unrest begins and theft occurs, it’s like a dam bursting. 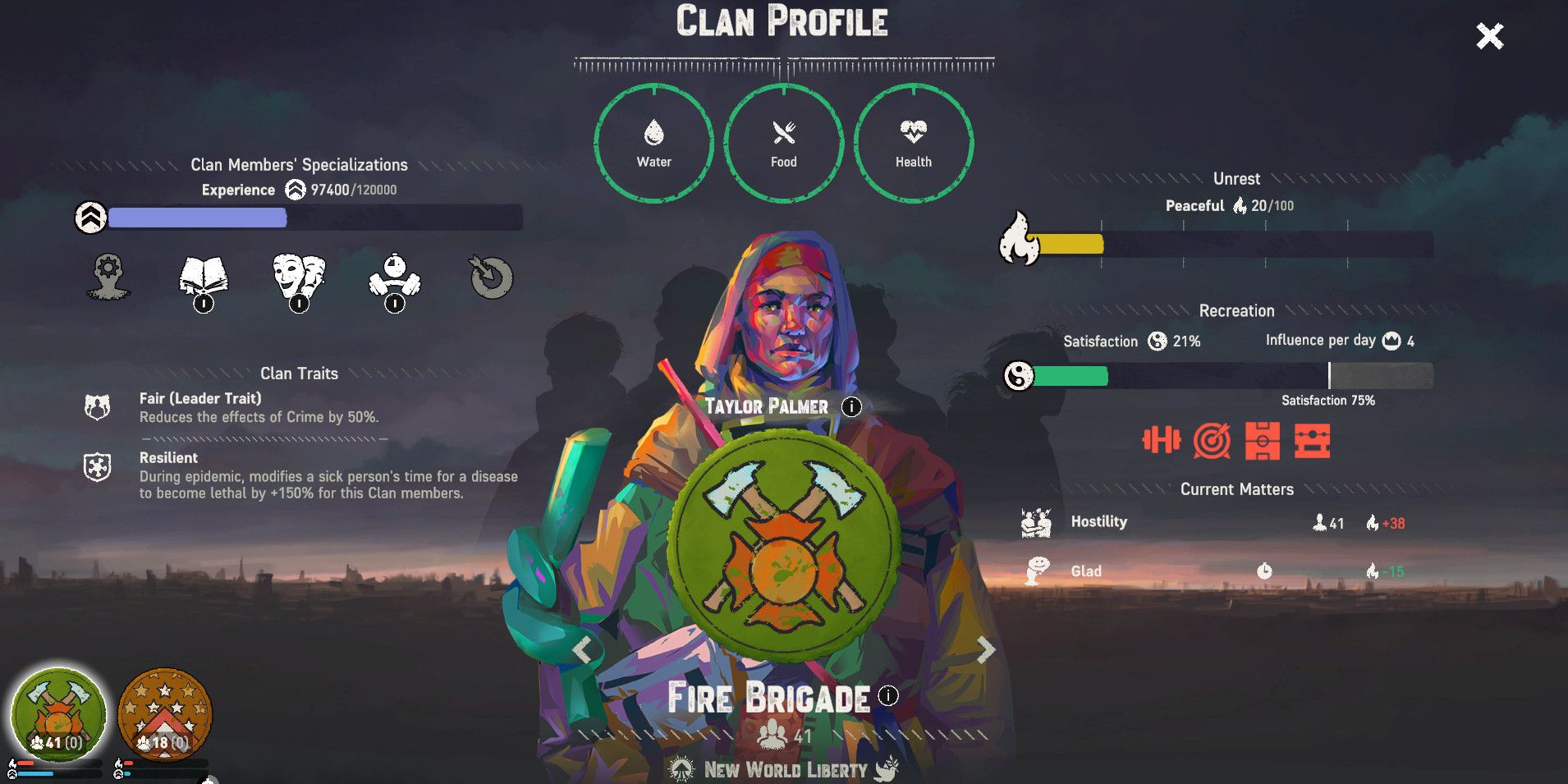 Issues can snowball quickly in Floodland. A large and sick population led to unrest, which led to theft, which led to a shortage of safe food, and then the cycle continued. By the end about a third of my people had been lost to illness, starvation, or desertion. Predator fish attacks that disrupted angling and shellfish disease that slowed farming should have been engaging challenges that shifted my focus away from expansion and towards disaster management for a time, but the bugs mentioned above meant once my food stockpiles ran out, they never stabilised again.

It’s a shame because Floodland fixes a lot of the issues I have with city-builders. The resource balance at the top of the screen is indicative of the best-case scenario, where people work full shifts with no delays in transporting goods, but other than that the UI is intuitive and easy to read, utilising symbols in order to keep the screen as text-free as possible. Hovering over them reveals all the info you need, with hyperlinks that automatically open relevant menus when needed, drastically reducing time spent looking at data instead of my makeshift town. 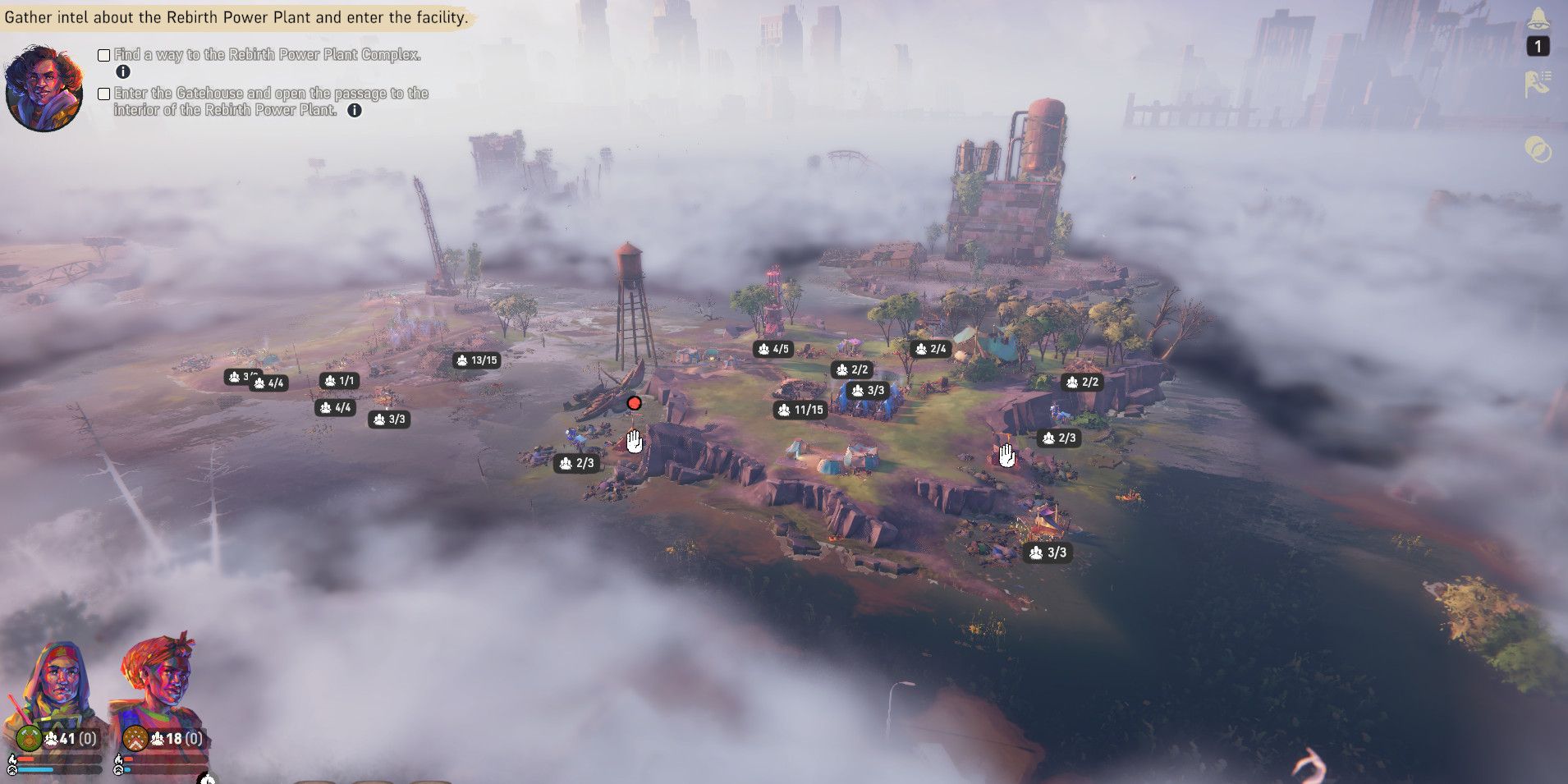 The gameplay features welcome quality-of-life boons too. Hovering over a building will light up the paths people take to it, indicating where I should build roads to help speed everyone up. Yellow means someone is travelling an unreasonable distance to do their job. Living too far away from work causes long commutes – people often have to walk through shallow water which slows them down – so it’s best to cluster micro-communities with housing, workstations, and recreation together. No micromanagement is needed, workers will relocate to empty homes nearest their jobs. If you build it, they will come.

The need for multi-use spaces again cements the core idea of Floodland, that this is about rebuilding civilisation one community at a time. Its gorgeous folk soundtrack adds to the mood, with lilting guitar melodies punctuating the days, and original songs sung at the beginning of each new chapter of the story marking each step toward completion. Combined with the painterly art style, Floodland’s tone and atmosphere are phenomenal. 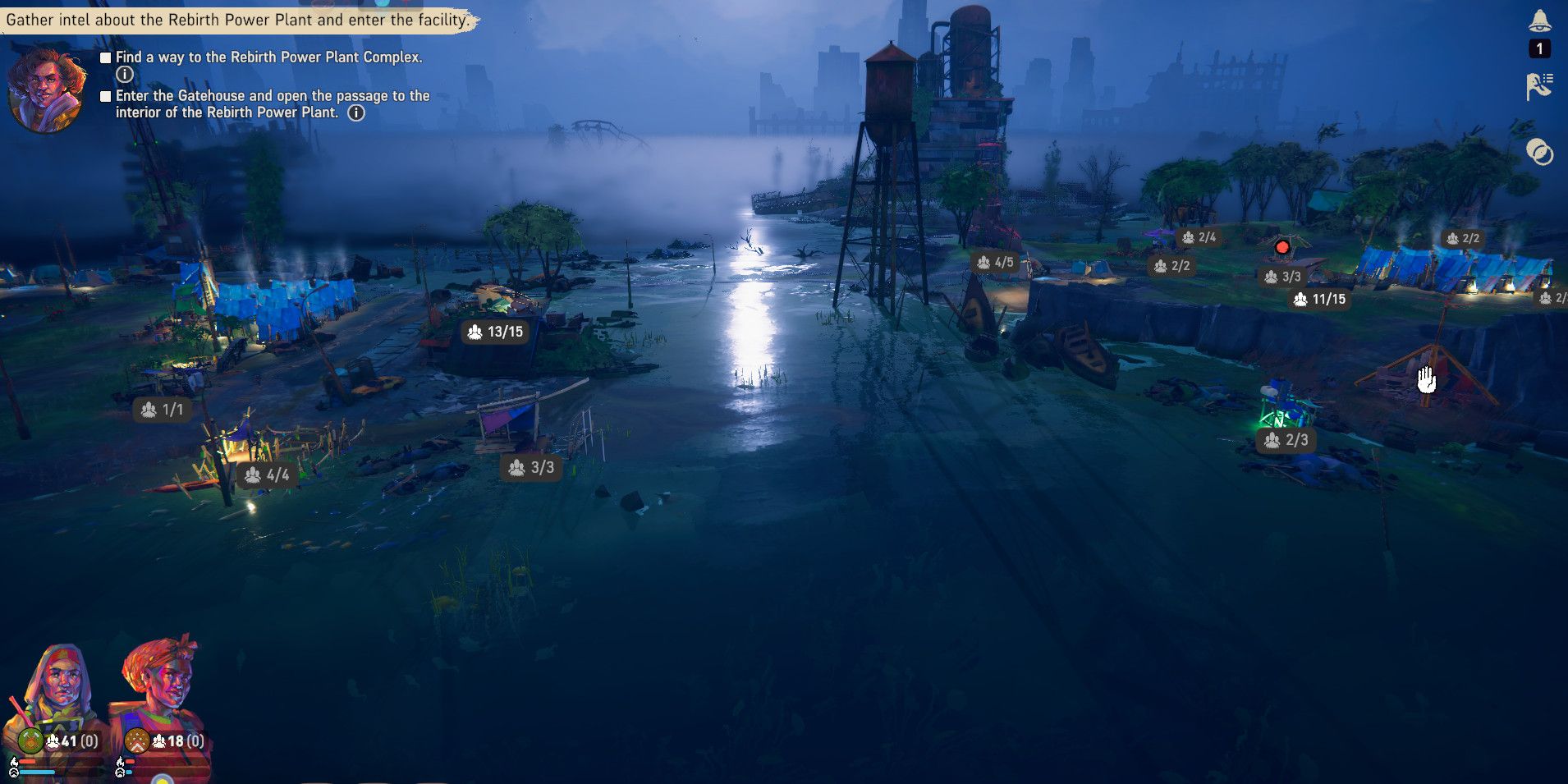 My experience began to sour once the story forced me to expand my settlement and begin searching the archipelago. It’s tediously difficult to improve relations between various clans. The abilities to transfer them to different districts on separate islets and outright cast away groups whose approach differs too much from your own help, but these are late-game solutions, and the mid-game is fraught with unrest due to inter-clan hostilities. Combined with the above bugs, it means expansion grinds to a halt as basic resource management becomes a nightmare. Still, it’s a tale worth playing through, and the hardship makes the successes even sweeter.

Floodland not only asks if you’ll sink or swim when the world ends, but if you’ll plunge your arm into the murky depths to pull others up with you or step on their heads to save yourself. Its ability to look toward the future of civilisation without losing sight of the individuals who will form it is insightful. It lacks a certain spark that would make it great, and some unfortunate bugs let it down in the mid-late game, but I look forward to returning to the floodlands once these teething issues are ironed out.

A Steam code was provided.