The Eorzean Aquarium in Final Fantasy 14 has recently welcomed a new exhibit — Innis’a’s Molluscan Expedition Across Eorzea — that evolves over seven weeks to give a dynamic experience like no other. The exhibit opened on January 1 and will run for 50 days in total, and each day brings a new entry to the guest book narrated by the main character, Innis’a, in the exhibit’s story.

The book entries will journal Innis’a’s adventure across different in-game zones, and in turn, the room itself will change and evolve to reflect the story. The idea behind this living exhibit was that it would encourage players to return to the room and enjoy the story as it progresses. It will stay in place upon completion for anyone who misses out, so any aquarium visitors can access it and enjoy the story.

“Visitors can expect a slightly scientific but emotional story about a novice researcher following his passion across the mainland, and about the aquarium that sees and acknowledges his work,” Innis, the creator of the exhibit, tells me. “There will be references to different NPCs and locations that won't always be as obvious, and I hope it's an intriguing tale that will make players return to see what Innis'a finds next.”

After being encouraged by a close friend to try out Final Fantasy 14, Innis first started playing in 2016, making it the first Final Fantasy title they’d ever tried. They’re a self-confessed ‘snail dad’ and hobby artist from Norway, and their love for all things mollusc encouraged them to pitch the exhibit idea to The Eorzean Aquarium.

“It started as an idea based on my intense passion and love for all snails, slugs, mussels – you name it,” Innis explains. “If it's a mollusc, you can be sure I love them. I pitched the idea of a mollusc-based room in the aquarium this summer and would draw little concept sketches while trying to flesh out exactly what I wanted the exhibit to be. As many already know, there are no aquarium-eligible snails in the game at present, so I knew I would have to get creative with housing items on display.

“As a pet snail owner and enthusiast in real life, it was a natural choice to make it an exhibit centered around them. I mainly play on Light DC, so I had to make an alt character on Crystal to make the exhibit in the aquarium. It was a golden opportunity to also re-play the main quest while also progressing the character I was going to use.”

Creating this unique exhibit came with its own set of challenges. While much of Innis’s time was spent writing the entire story, they also had to build the characters to be used, ensuring their outfits and chocobo barding were the right choices for the narrative. Fortunately, many volunteers from the aquarium helped with the process of developing plot points, character traits, and proofreading.

Another issue was that the game severely lacks aquarium-based molluscs — meaning that while they can be fished up, they can’t be displayed in tanks. Fortunately, the Sharlayan furnishings with their nautilus theme helped to create the exhibit alongside the canvases depicting different species of fishable creatures. Innis hopes this new exhibit will spark other players' interest in molluscs.

“My biggest hope is that players will learn something about molluscs, however little that something is,” Innis says. “If I’m able to spark even the smallest, newfound interest in a person to want to learn more, I consider my mission accomplished. If players also become invested in the characters and story somehow, that's a big plus. Not to mention if people want to go out there in FF14 and catch them themselves, I'm sure they will learn even more about the wicked world of FF14's molluscs.” 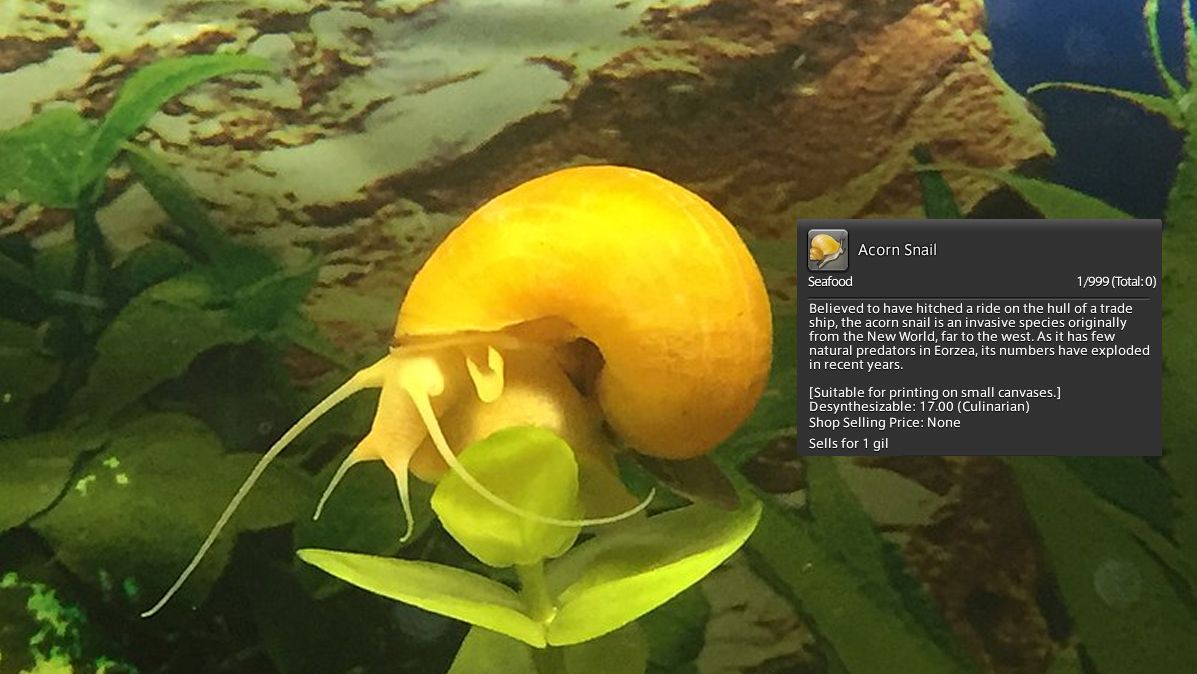 There are currently 106 species of molluscs in the game at present, including those that are only fishable during tribal quests. Innis has collated a spreadsheet of each one, showing where to find all of them and their individual lore.

“A vast majority of the species seen here are directly taken from real-life counterparts, however disturbing the concept is when looking at some of these,” Innis explains. “I've been pleasantly surprised many times when checking different snails against real-life species, and I find it very interesting how the dev team has gone about incorporating them into FF14 in a way that makes sense.

“Some good examples are the Armorer, based on the deep sea Iron Snail — and the Acorn Snail, which is most likely based on our Apple Snails. They are not only lore-appropriate but use the same color scheme as their real-life counterparts. I get giddy just writing about it. The only species I have yet to see in FF14 is a simple terrestrial slug, be it a banana slug or forest slug. Molluscs in FF14 are mostly found via fishing, so I highly doubt I will see them anytime soon.” 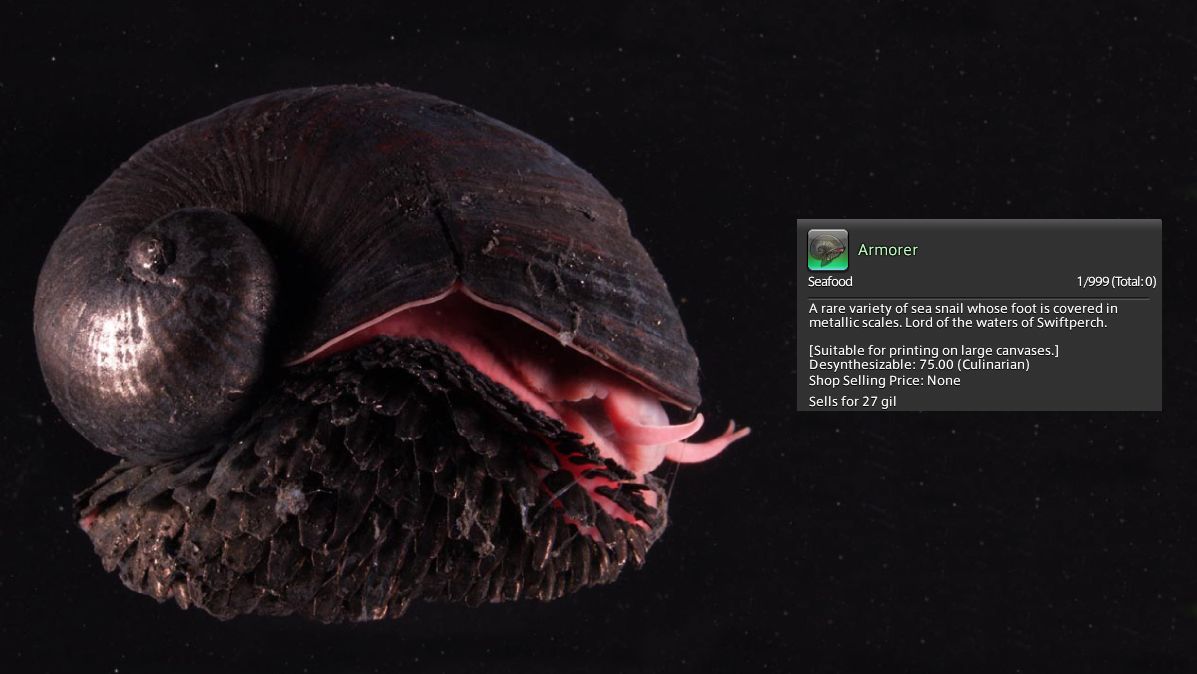 Innis has plans for future mollusc-based content but is keeping them under wraps for now. In the meantime, be sure to check out the Molluscan Expedition Across Eorzea at The Eorzean Aquarium in Plot 59, Ward 16, in the Lavender Beds on Malboro, Crystal.