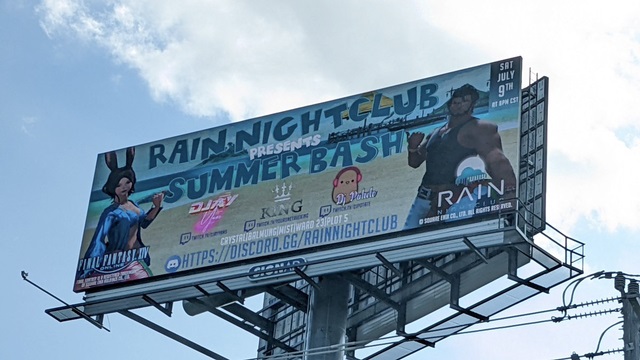 Public billboards advertising a Final Fantasy 14 beach party may have landed the organisers in trouble with Square Enix.

Did you know that there’s a nightclub scene in Final Fantasy 14? While that may sound weird, it being an online role-player means it offers plenty opportunities for… well, role-playing.

One such nightclub, called the Rain Nightclub, is meant to be holding an in-game beach party this Saturday, July 9.

However, it seems the people in charge may have attracted the ire of Square Enix after billboards advertising it were spotted in the real world, showing up as far afield as Texas and California.

Technically, advertising the event on its own shouldn’t be much of an issue. The problem is that the billboards use the game’s official logo (presumably without Square Enix’s permission) and depicts characters from the game in modded outfits.

Square Enix is very much against the use of mods in Final Fantasy 14 and has been clamping down on their use as of late. Players have faced bans for using mods that alter the user interface, for example.

While mods that change the appearance of characters are also prohibited, they very rarely result in bans, with Square Enix turning a blind eye most of the time. That’s not something it can do with a public billboard that explicitly shows a modded character though

Neither the people behind the Rain Nightclub nor Square Enix have commented on the situation, but pictures of the billboards that were shared on Twitter by one DJ Potate (a Final Fantasy 14 DJ hired for the event) have since been deleted and the user has restricted her Twitter account.

The Rain Nightclub’s website has even been temporarily deleted and is not set to return until ‘things calm down.’ Whether it’s referring to fan backlash or possible legal action from Square Enix is unknown.

While we couldn’t check it for ourselves, the nightclub is said to feature adult NSFW content. So, using the Final Fantasy 14 branding to promote this sort of thing is another big no-no that will get the owners in hot water.

Other Final Fantasy 14 players have been very public with their criticisms, even flooding the nightclub’s Discord to roast the owners for spending money to essentially violate Square Enix’s terms and services.

Club owner Revarious, speaking with news.com.au, claims that the billboards didn’t actually cost that much, saying ‘I giveaway more things to the community off the [in-game store] in two weeks than this whole billboard thing cost us, and we are also still doing all those giveaways at the same time.’

There are several Reddit threads about it on the Final Fantasy 14 subreddit, with many pointing out that the billboards likely wouldn’t have reached the nightclub’s core audience – other Final Fantasy 14 players – anyway.

Ironically, this entire situation has been more successful advertising for the event than the billboards ever would have been. Although it won’t matter if the party is forcibly cancelled.

some of my favorite messages in their discord about this situation: pic.twitter.com/efOdV4DLHh