It’s that time of year again. The leaves are falling, it’s getting chilly outside, and things are about to get much more spooky. All Saints’ Wake is just around the corner in Final Fantasy 14, but there are other ways to get in the spirit while you wait for the new Wake Doctor gear. Tucked away on the outskirts of the Lavender Beds on Brynhildr, brave Warriors of Light can find the old Haven Hotel. The now-abandoned building is home to all sorts of spooks and specters…

The Hollow Haven haunted house can be found in Ward 22, Plot 58, and it’s open 24/7 until November 1, 2022. You can drop by and visit anytime, soaking up the haunted vibes in 19 distinct areas within the house, or even challenge yourself to find all the items for the scavenger hunt. There are also special haunting hours when staff can be found throughout the house ready and waiting to give you a fright.

“Haunting hours take things to a new level,” Aleu Lyehga, the creator of Hollow Haven explains. “It’s an immersive improv performance. Each ghost is a different character with its own routine, lines, and techniques, as well as its own preferred haunts. No two walkthroughs are quite the same and even two people visiting together can have different experiences. While it’s not quite a roleplay experience, we do allow roleplay – we just ask that people be courteous of others and respectful to the staff.” 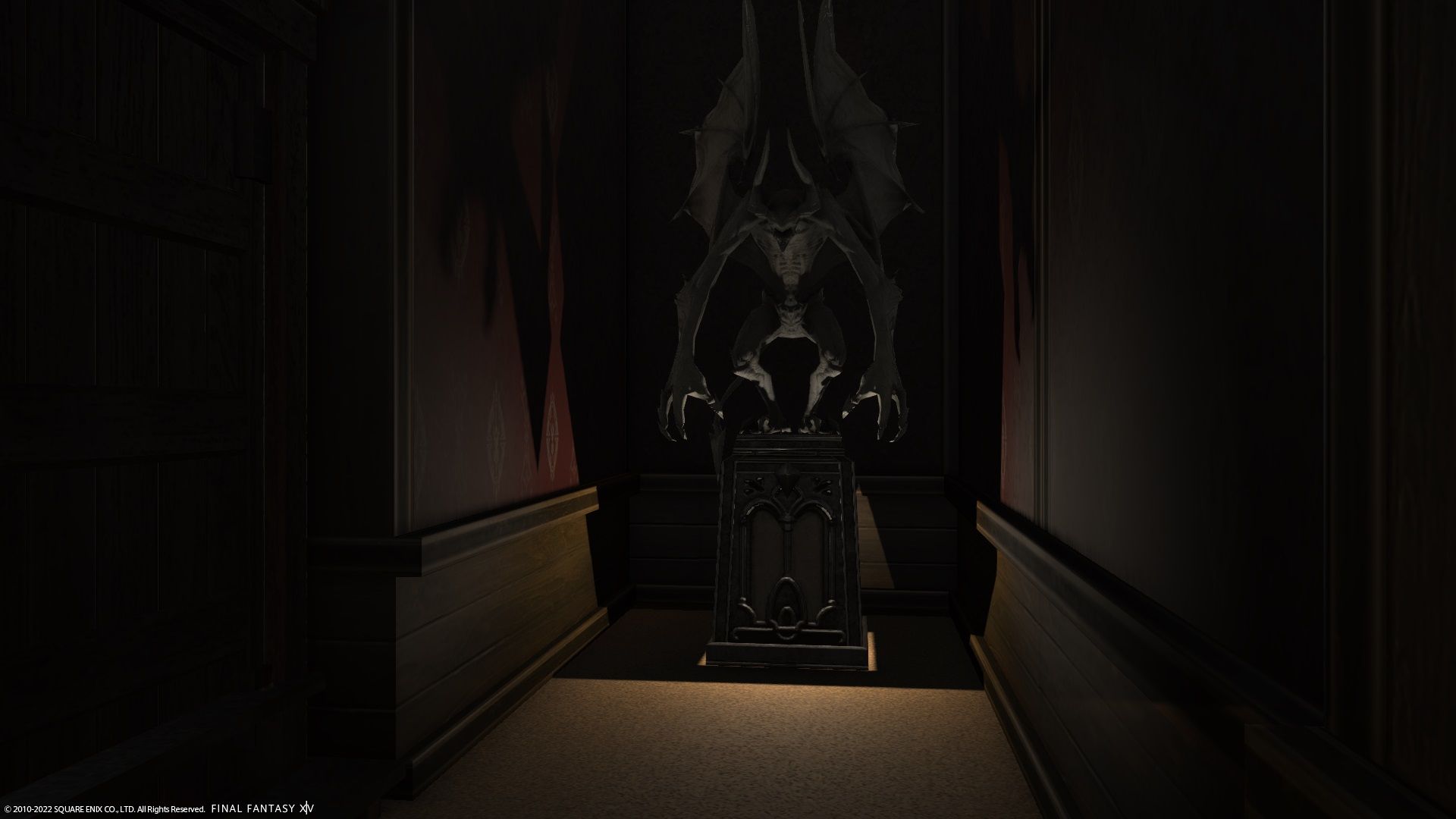 The team put a lot of thought into their spooky alter egos for haunting hours, choosing the ultimate scary outfits to ensure that they’ll give any visitors a jump scare to remember. It goes beyond just choosing frightful glamour gear, with the team taking things even further and choosing the best dye for the job.

“Everyone puts as much thought and effort into their costumes as I do building any given haunt,” Aleu says. “Really the only ‘rules’ are it has to be creepy, fit your character, and you need to be using predominantly metallic dyes. They give us an ethereal or otherworldly look, but more importantly, they help us stand out a bit more while we’re using the rogue hide ability.

“Tsimh’s character, Ookie Spookie wanted the maid dress to be her primary outfit, in metallic red. While we were experimenting with different hats, legs, shoes, etc, I suddenly had an idea. She’s wearing plain cotton tights and the best man’s gaiters, both dyed soot (matte) black. As a result, when she’s not directly beneath a light source, it almost looks like she doesn’t have legs at all.” 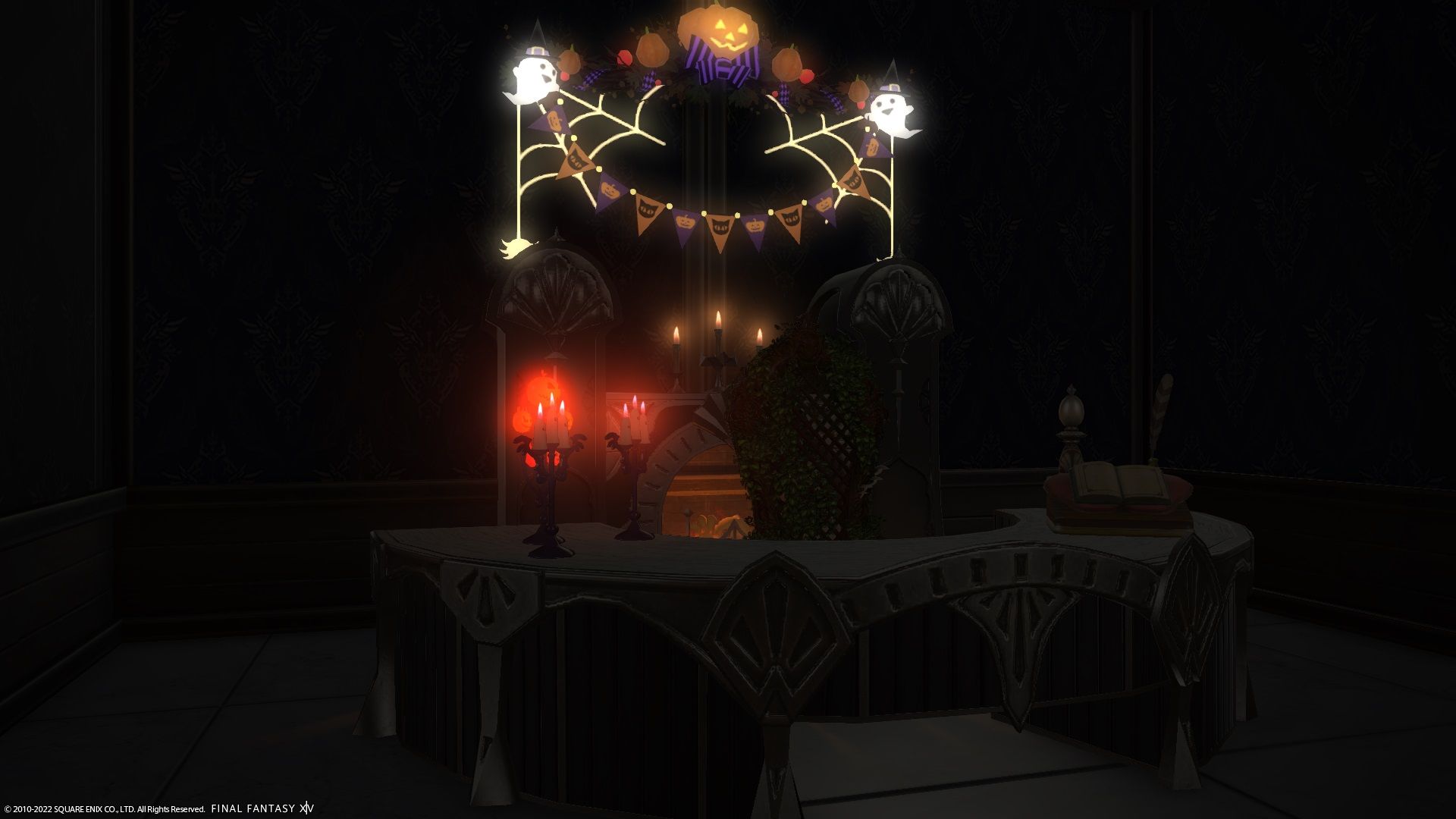 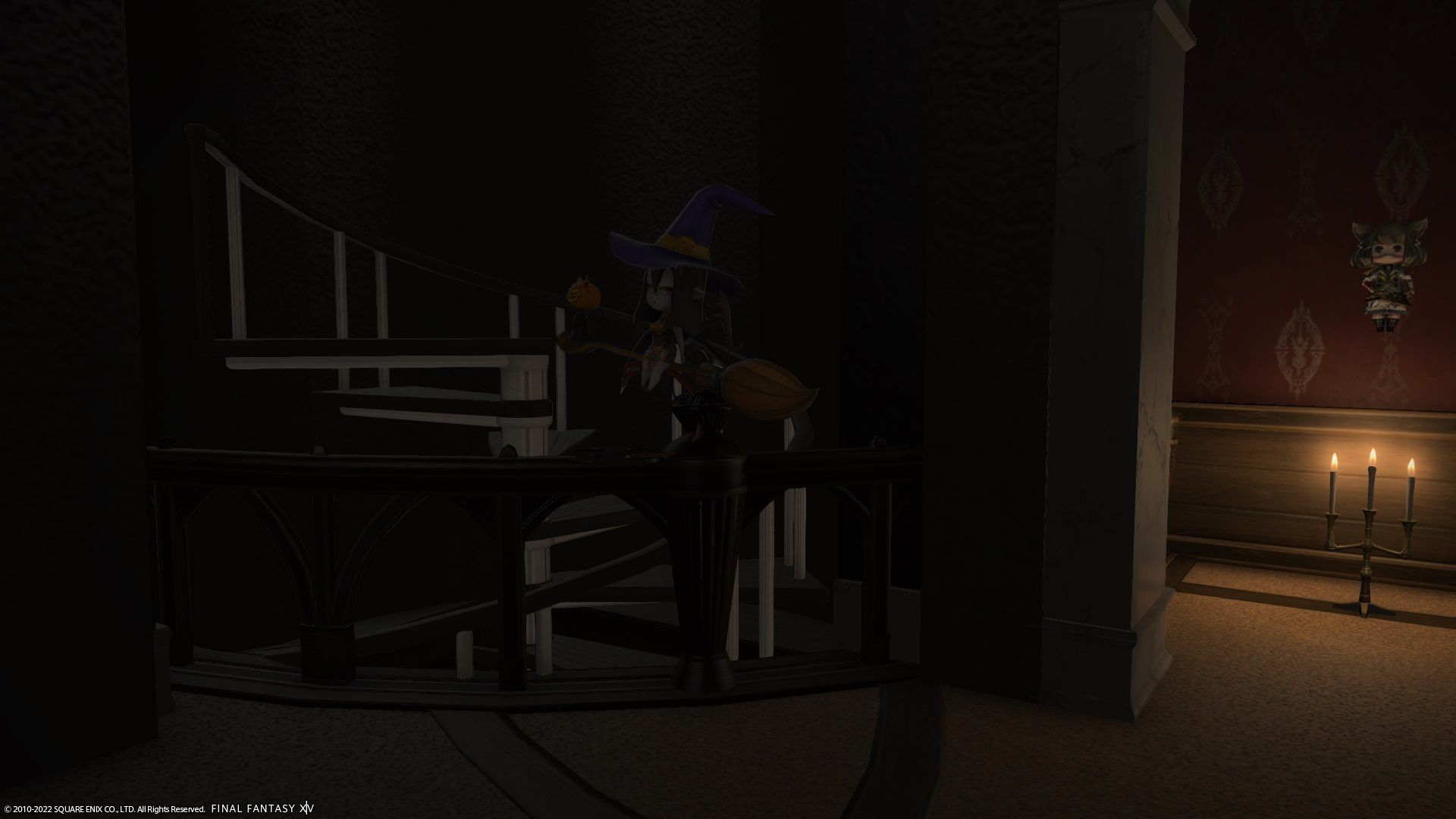 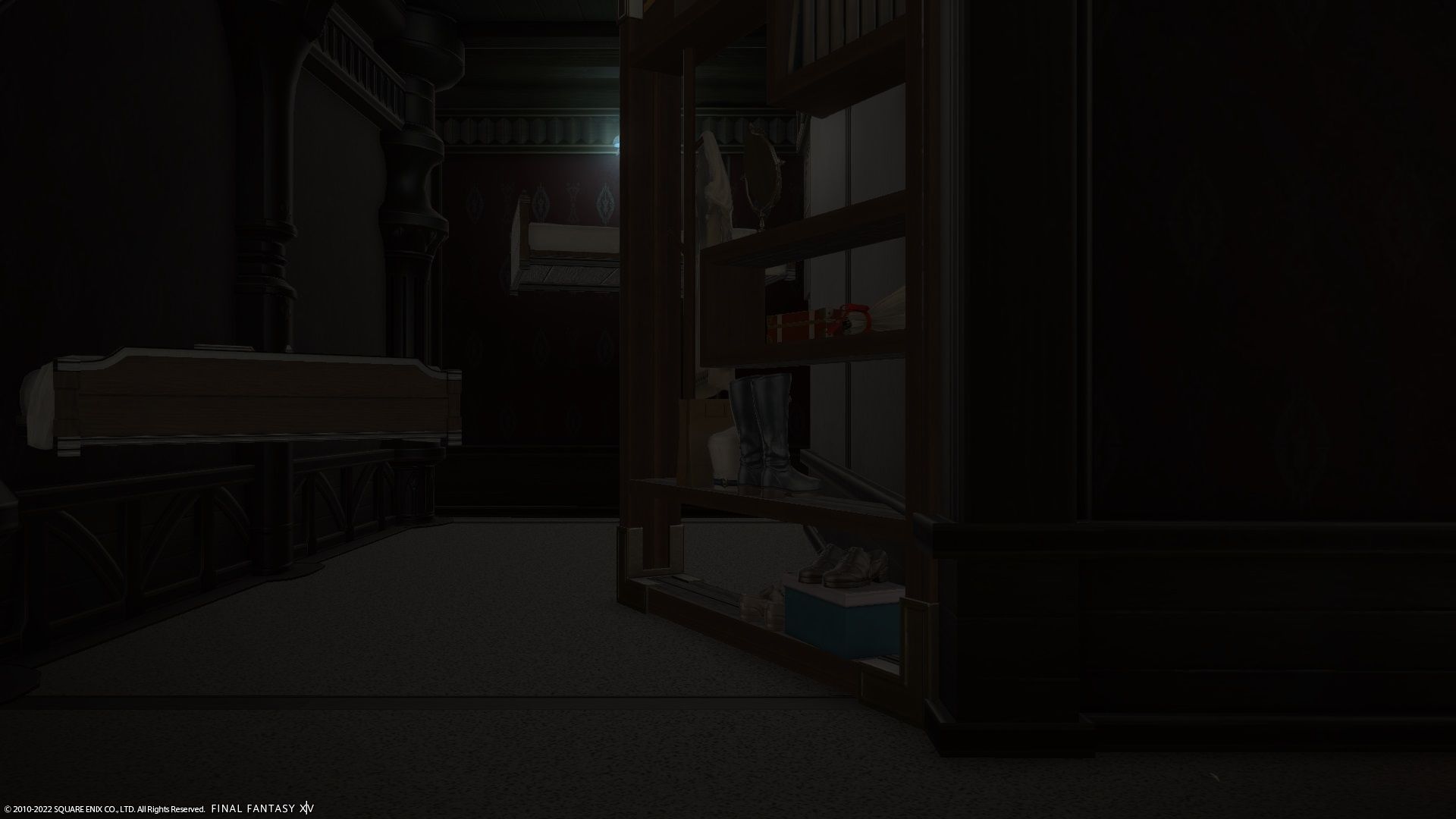 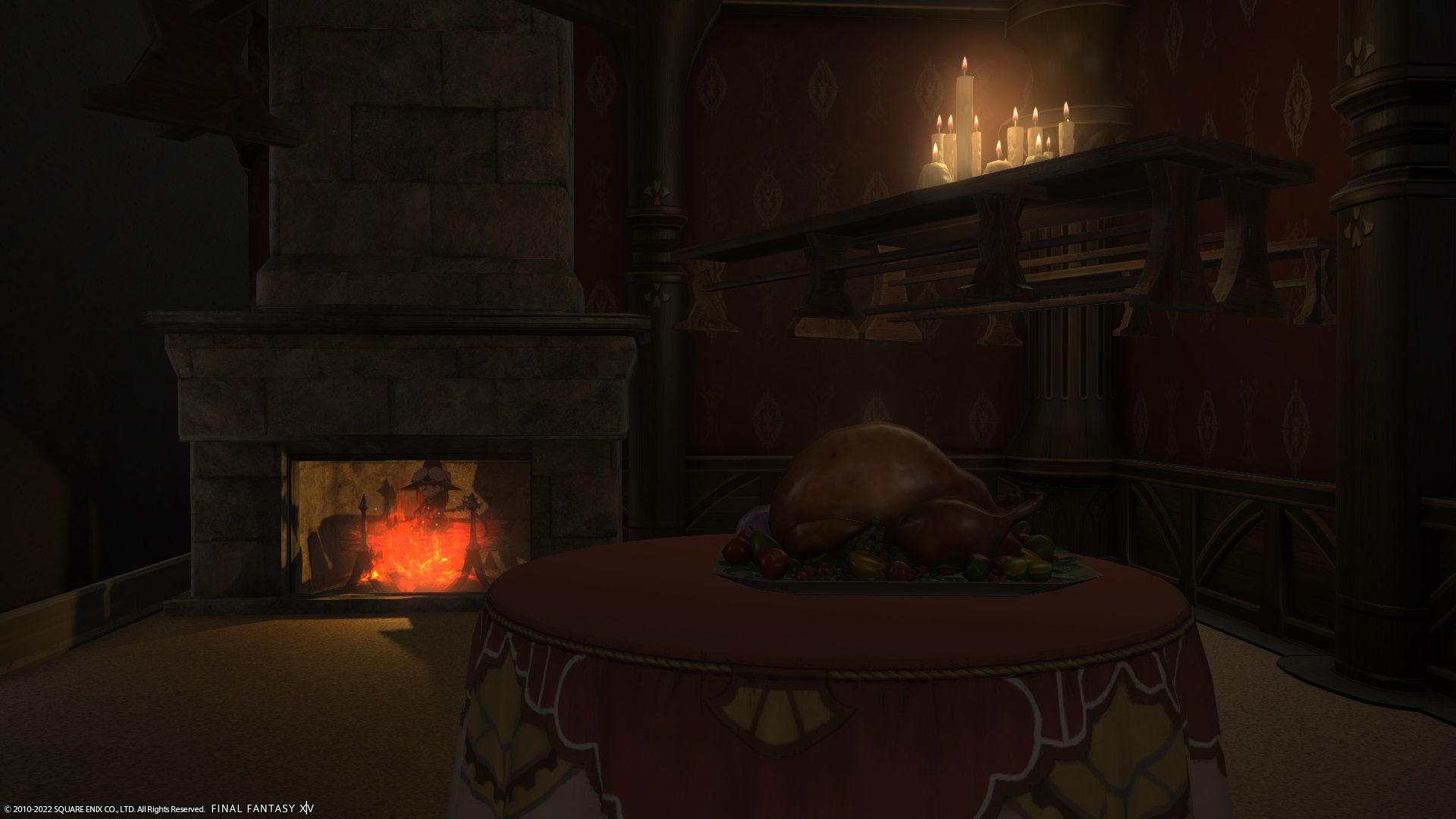 If you want to visit during haunting hours, the Hollow Haven Discord advertises when these are currently live. Even if you can’t swing by during these times, Hollow Haven is still a must-visit.

“During off hours, players can take their time roaming and exploring,” Aleu tells me. “The scavenger hunt was introduced as a way to get people involved and encourage them to take their time and appreciate all the details. Every housing slot counts, so I make sure the items are placed with varying degrees of difficulty. If I could, I’d add loads more to the hunt, but I don’t want it to get too overwhelming for people.

“Aside from the scavenger hunt, Hollow Haven has a few other schticks that I bring back every year, the most popular of which is the haunted paintings! Players can also always find Alpha being way too happy somewhere he shouldn’t be, a decapitated head in the turkey, Khloe’s Summoning, and the ‘haunted swamp’, which is a garden this year.”

This is the fifth year that Aleu has hosted the Hollow Haven halloween event, with this year’s creation taking her over 45 hours to finish. Aleu usually does all the heavy lifting herself — from material gathering, to design and construction — but this year she had help from a team of dedicated staff called the Boo Brigade. Comprised of Tsimh Romana, Axel Pompadoruious, Reed Westergard, Anan’zi Chalahko, and Eona Nialy of Brynhildr, the Boo Brigade has helped immeasurably, crafting over 200 Soot Black dyes, providing feedback, and helping to streamline the whole process.

Aleu was a regular in the haunted house circuit, often helping out with everything from administrative duties to being an active scarer haunting the halls. When she found that her work hours prevented her from taking part in other haunted houses, she decided to create her own. This happened in mid-October 2018 in a medium-sized FC house, so Aleu was more limited on what she could do with the space, and even more limited on the time she had to get it together.

In 2020, having shared her dismay at struggling to get a large FC house plot, her friends in the Alpha’s Heroes FC let her use theirs so that she could fully unleash her creativity in a house with 400 item slots to use. From there, the idea grew, and the Hollow Haven website and Discord were created. 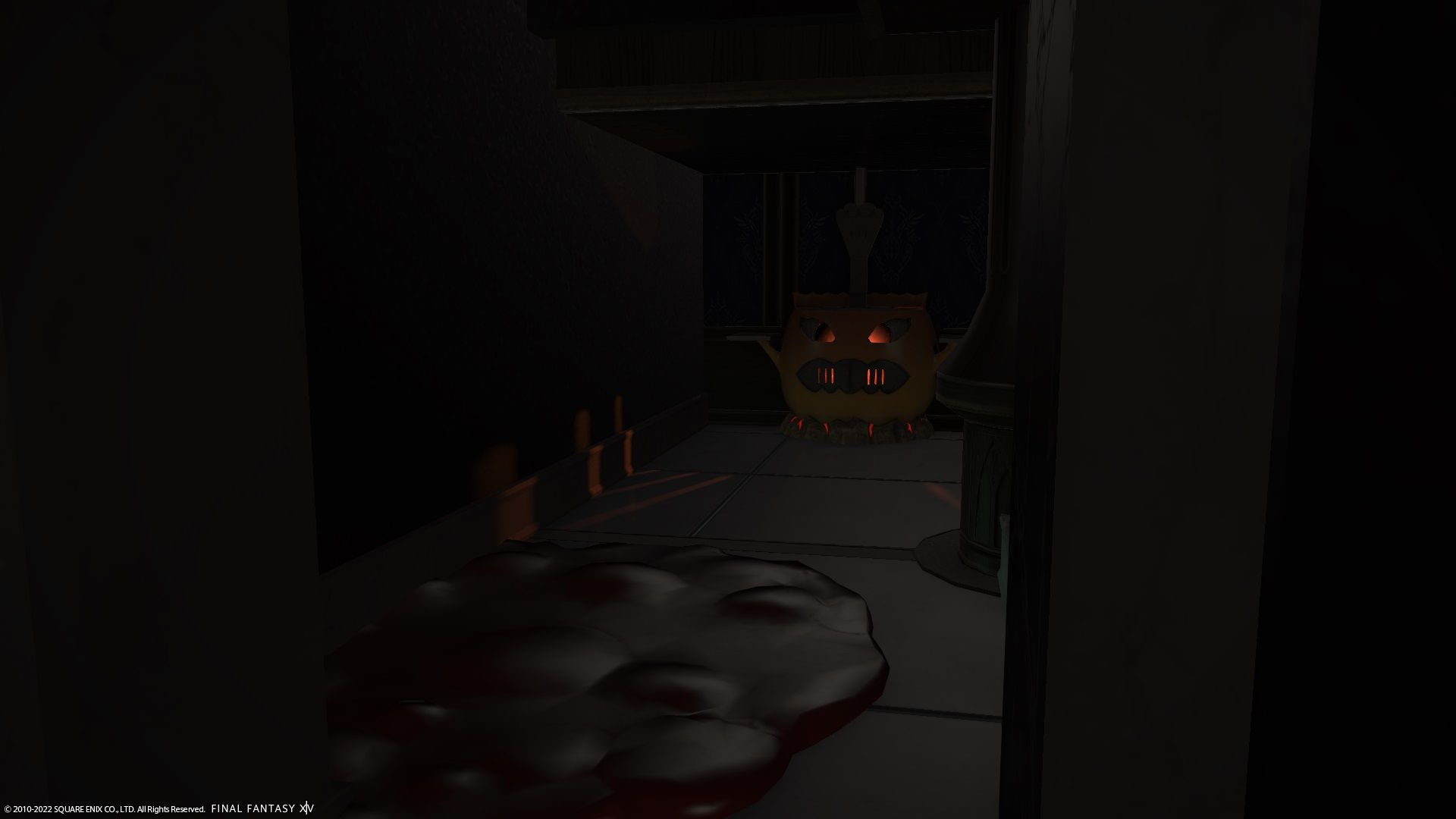 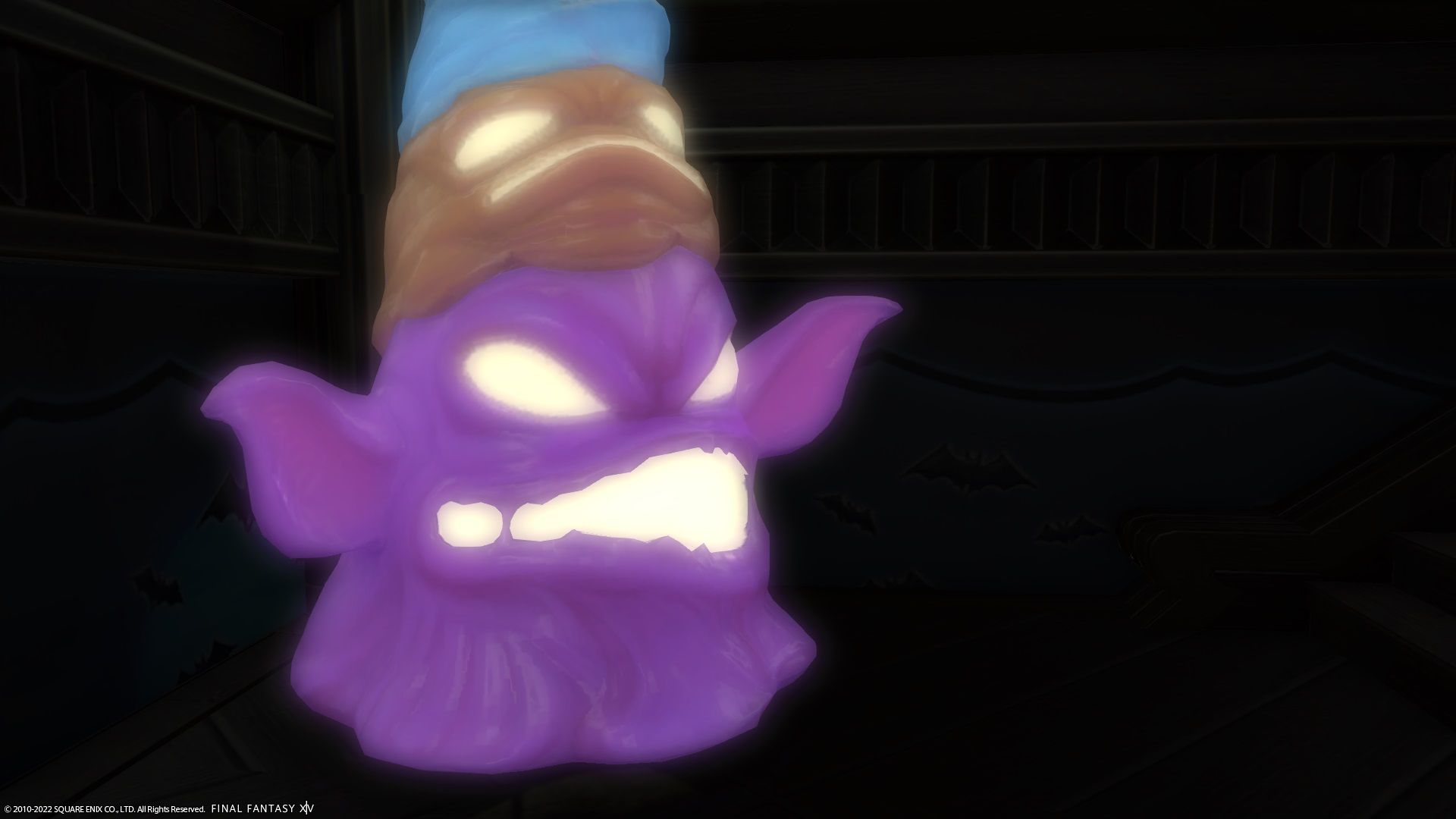 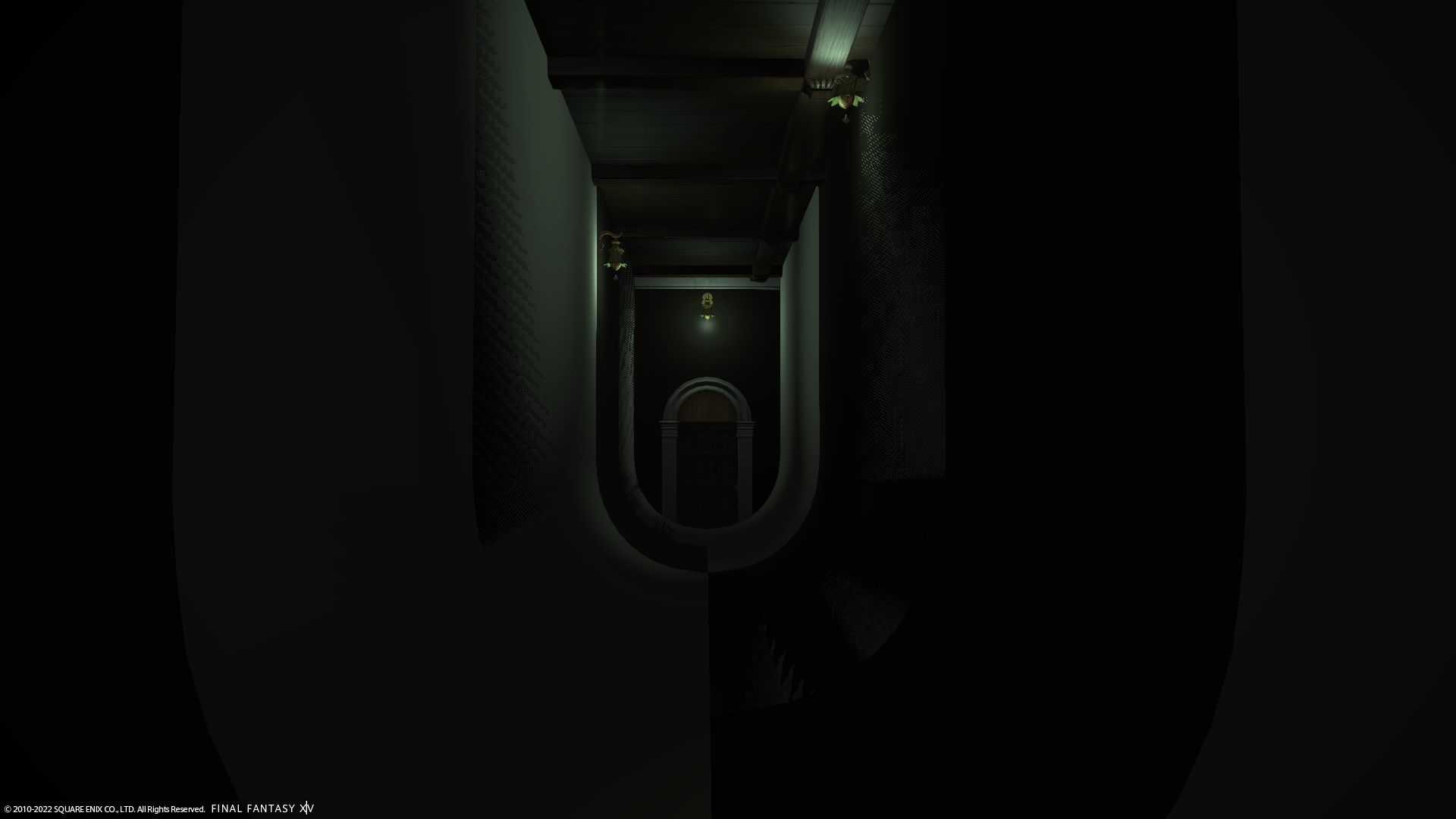 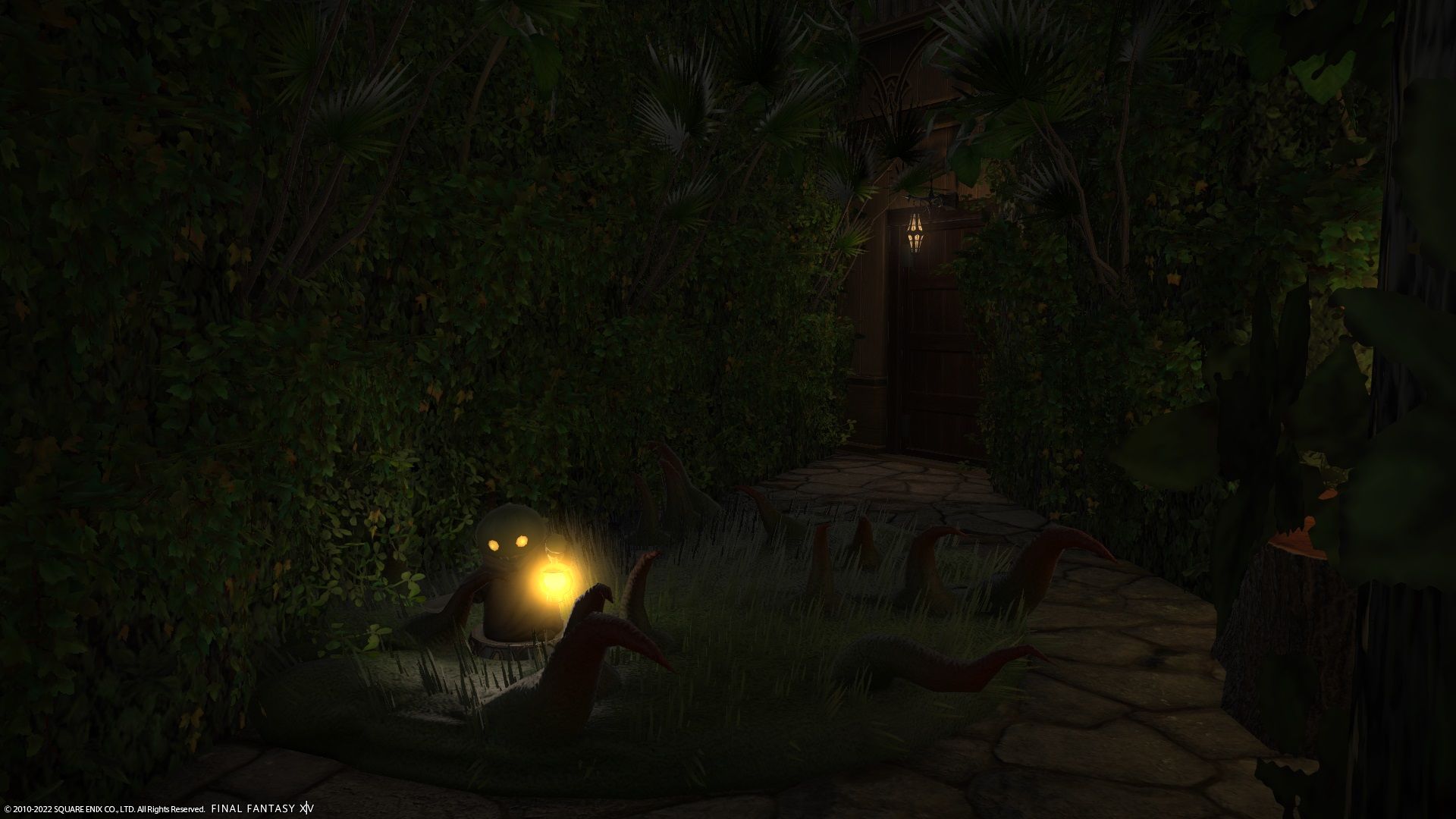 “Up until that year, the house just was,” Aleu tells me. “You could come and explore, maybe sometimes I’d be roaming around heckling and haunting, but that was it. Then certain friends of mine wanted to get involved. Alts with fitting names were created, rogues were powerleveled, crash courses in virtual performance techniques were given, and slowly haunting hours were born. Over the weeks, we came up with a loose story as we interacted with each other, hinting at the horrible happenings to the family who once lived in the house.”

I recently visited, using first-person view as recommended, and enjoyed the incredible details in this spooktastic venue. It was far larger than I expected, with paths that twist and turn on each other, so you feel as though you’re in a maze. There are so many interesting little touches that you can spot while exploring, and the craftsmanship that has gone into the displays is superb. There was smoke wafting through various halls, mysterious bookcases that opened up new pathways, floating furniture, eerie lights, and squishy bloody puddles to walk over.

“Making things spooky is a combination of visuals and audibles,” Aleu says. “Lighting, or lack thereof, is very important. Sometimes less is more. Placement matters, too. My gargoyle statue, for instance, is lit that way by placing one or two Dragon Lamps inside the statue facing different ways. I like using showerheads, hidden music boxes, BBQ spits, squishy puddles, etc to create additional ambient sounds that make the place seem a bit more alive.

“The blood puddles are really simple! They’re Pudding Throw Rugs. The various Pudding furniture items make disgusting squishy sounds when you walk across them. With a bit of Dalamud Red Dye, your brains draw exactly the conclusion I want them to. I also use them for mud puddles.” 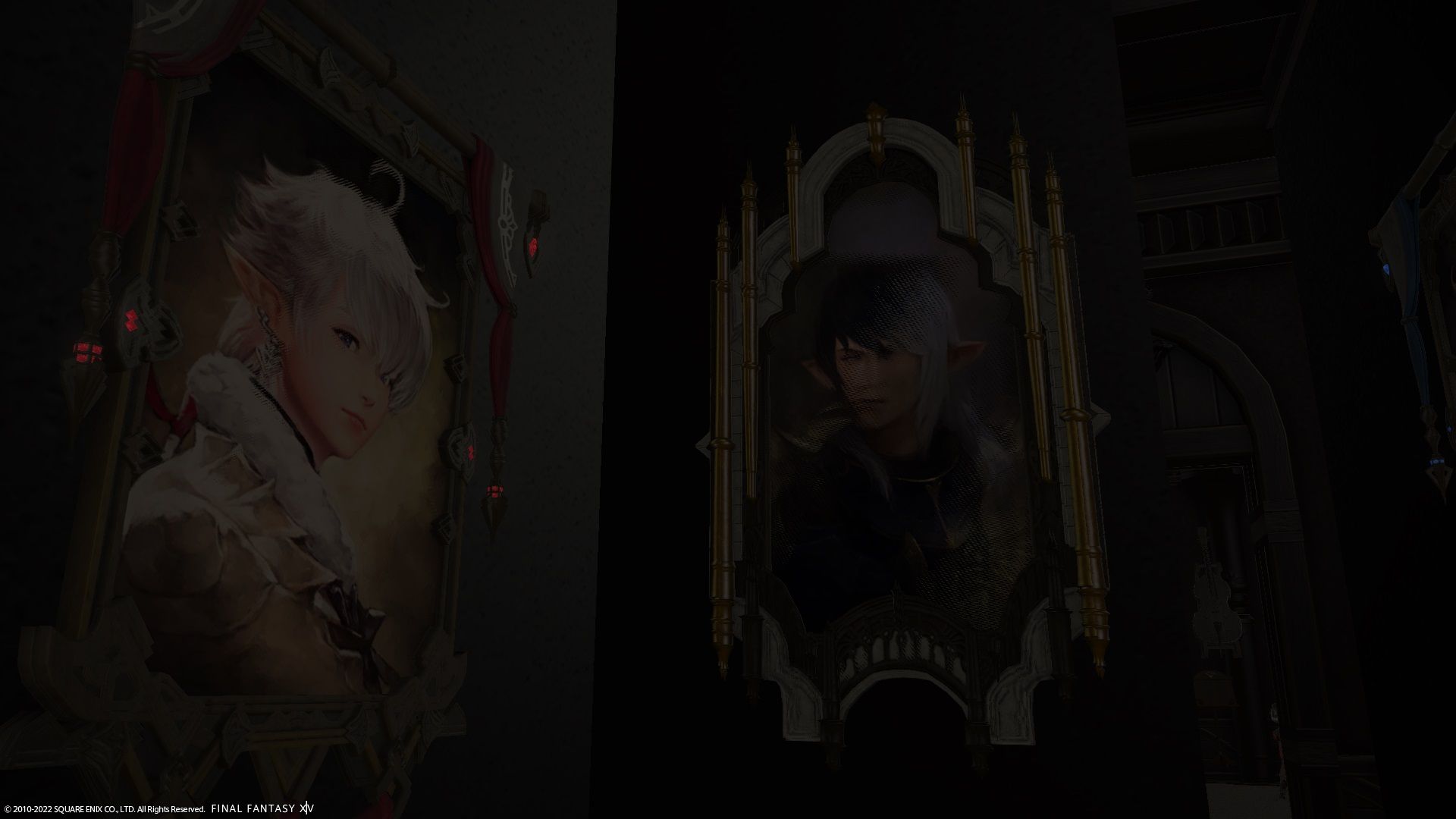 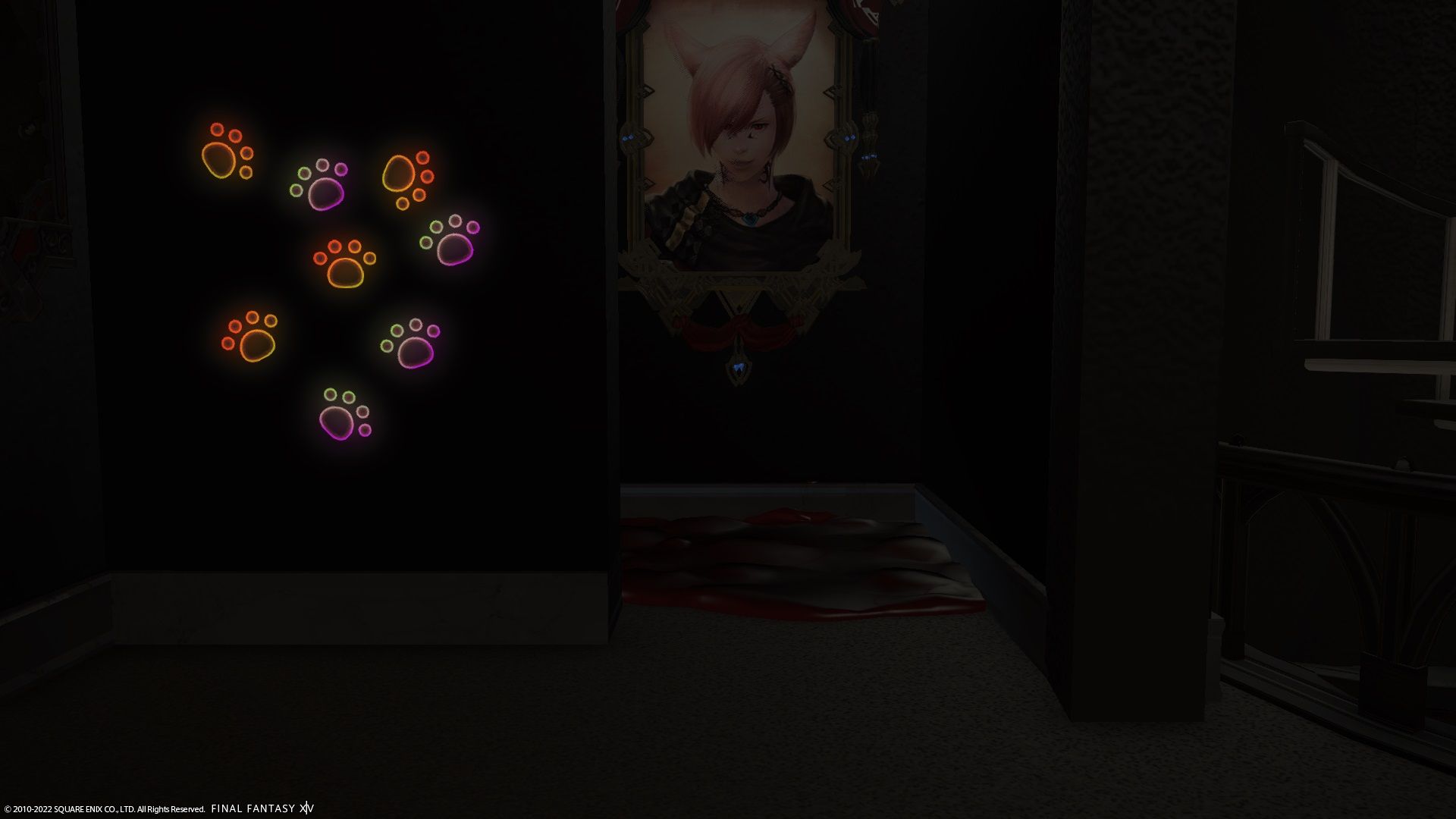 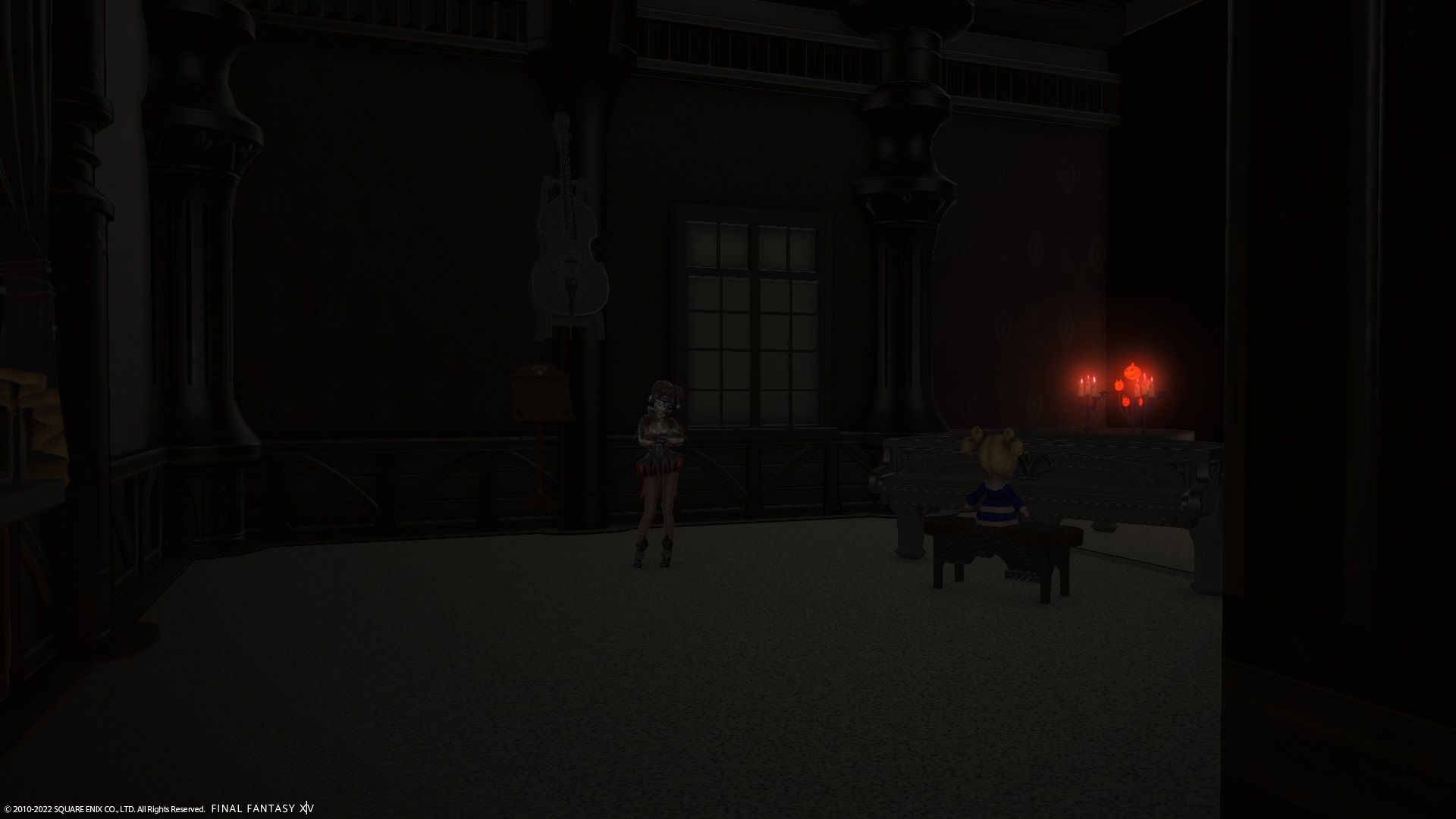 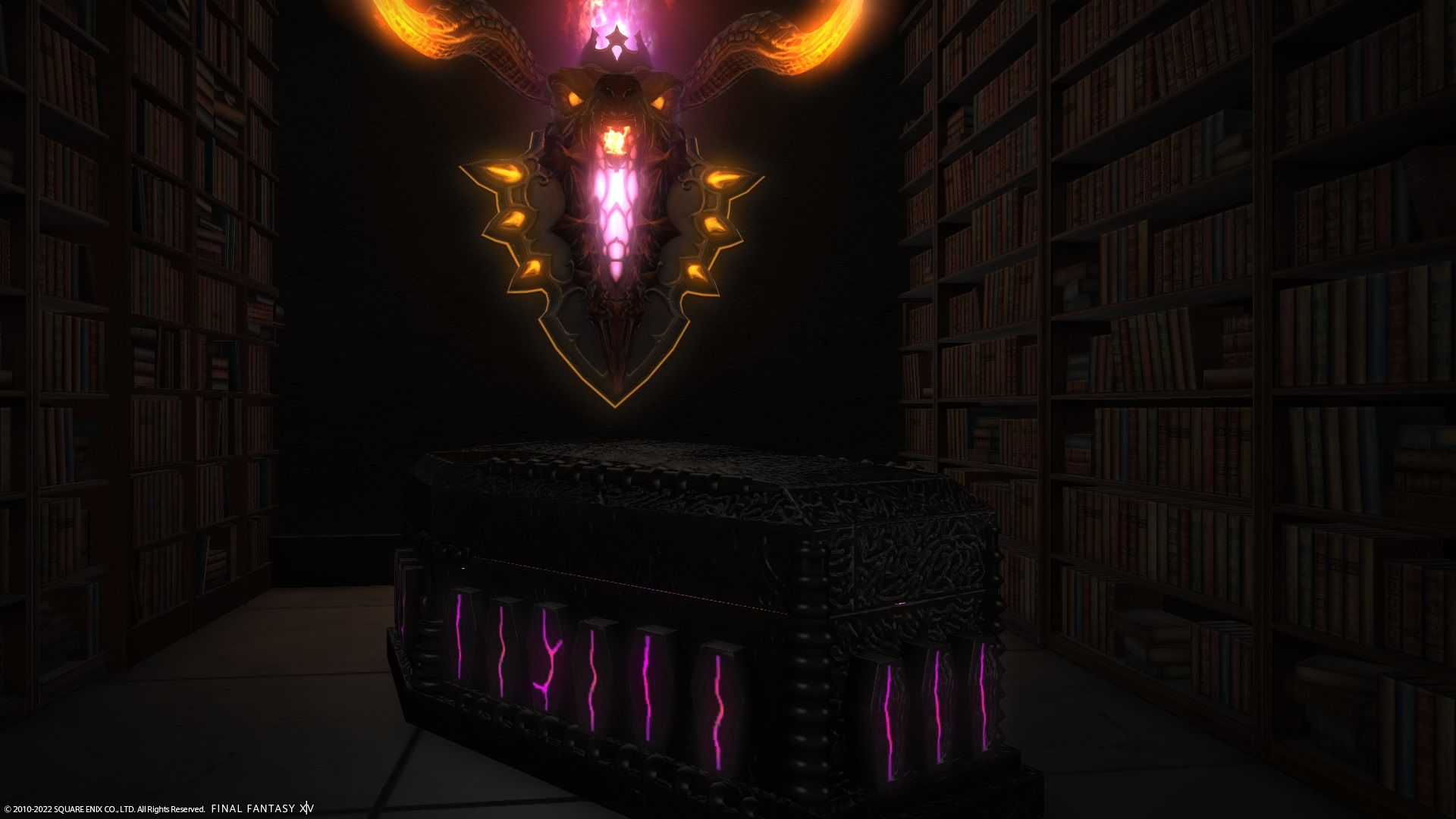 One of my favourite parts of the house was the haunted paintings, which changed and twitched as you moved, so they appeared “alive”. Sometimes they morphed into portraits of entirely different characters. “There are two methods I use,” Aleu explains. “The first is two frames of the same size placed directly on top of each other, each containing a different painting. The other is two of the same portrait placed on top of each other, with one nudged just a hair in another direction.”

Another section that I found particularly impressive was a hallway that is entirely upside down, resulting in a very confusing walk across the ceiling to the next door. There are creepy floating heads and mannequins throughout, which I imagine are even more spooky when mixed with the staff members haunting the place.

“The trippy hallway in the basement, the winding staircase we finally managed to use properly, and the garden look pretty fabulous too,” Aleu mentions when asked what areas of the house are her favourites. “I’m also proud of managing to create a defined path through the house this year, as in the past it’s been free roam. But if I had to pick one place overall…I’d say it's the area we call ‘The Dead End’. I was originally struggling with how to end the whole thing, and the first few iterations were very underwhelming. The idea is that this place is supposed to be as far as you can go. There’s a big angry Ifrit head, walls on all sides, bars that close, and a massive coffin in there. There isn’t meant to be a way out, and the only way you escape is with a little help…”

Make sure you check out the Hollow Haven haunted house while it’s still available. You can find more information on the website or via the Discord.