You are here:
Home / FIFA 23 is the best biggest ever with 10.3 million players in one week

FIFA 23 is the best biggest ever with 10.3 million players in one week 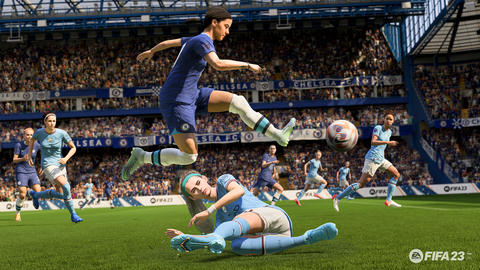 The final FIFA game from EA is already the most popular entry in the series, which bodes well for EA Sports FC.

At this point, everyone knows that EA is losing the FIFA license, meaning its FIFA series of games will be renamed as EA Sports FC from next year onwards.

It’ll certainly be interesting to see how the series manages with the new name, especially after how successful FIFA 23 has been for the company.

Earlier today, EA revealed that FIFA 23 had the biggest launch in the series’ history, breaking the previous record set by last year’s FIFA 22.

Whereas FIFA 22 attracted about 9.1 million players within the first 10 days after launch, 10.3 million have jumped into FIFA 23 within its first week.

‘The response from our fans has been nothing short of incredible, and we’re thrilled that our community is playing with their favourite players and teams across FIFA 23 in record numbers,’ said Nick Wlodyka, senior vice president and general manager for EA Sports.

‘With both the Men’s and Women’s World Cups, and exciting updates to our women’s club football content in game still yet to come, we’re just getting started on providing players with the most authentic and immersive experience yet.’

Those numbers suggest that FIFA 23 is doing something right to bring in more players than any previous game. Even if some players initially dropped it when EA’s new anti-cheat software on PC made it impossible for them to play it.

There’s also a hilarious, but unsurprising, disconnect between these figures and user reviews. Despite how popular it is, its user score on Metacritic is a dismal 2.2 for the PlayStation 5 version, 2.3 for Xbox Series X, and an even worse 1.5 for PC.

Of those three, the PlayStation 5 version has the most user reviews at 160, at the time of writing, so this is only a very small portion of the total player base.

It’s too soon to tell how next year’s game will fare by comparison. EA is no doubt hopeful that fans will be loyal enough to stick with the series without the FIFA branding.

The FIFA organisation itself plans on partnering with another studio to release a new line-up of FIFA branded games. However, it’s yet to officially announce any such deals.

As a reminder, EA is losing the license because FIFA reportedly wanted to start charging the company over $1 billion for it, more than double what EA was paying to begin with.