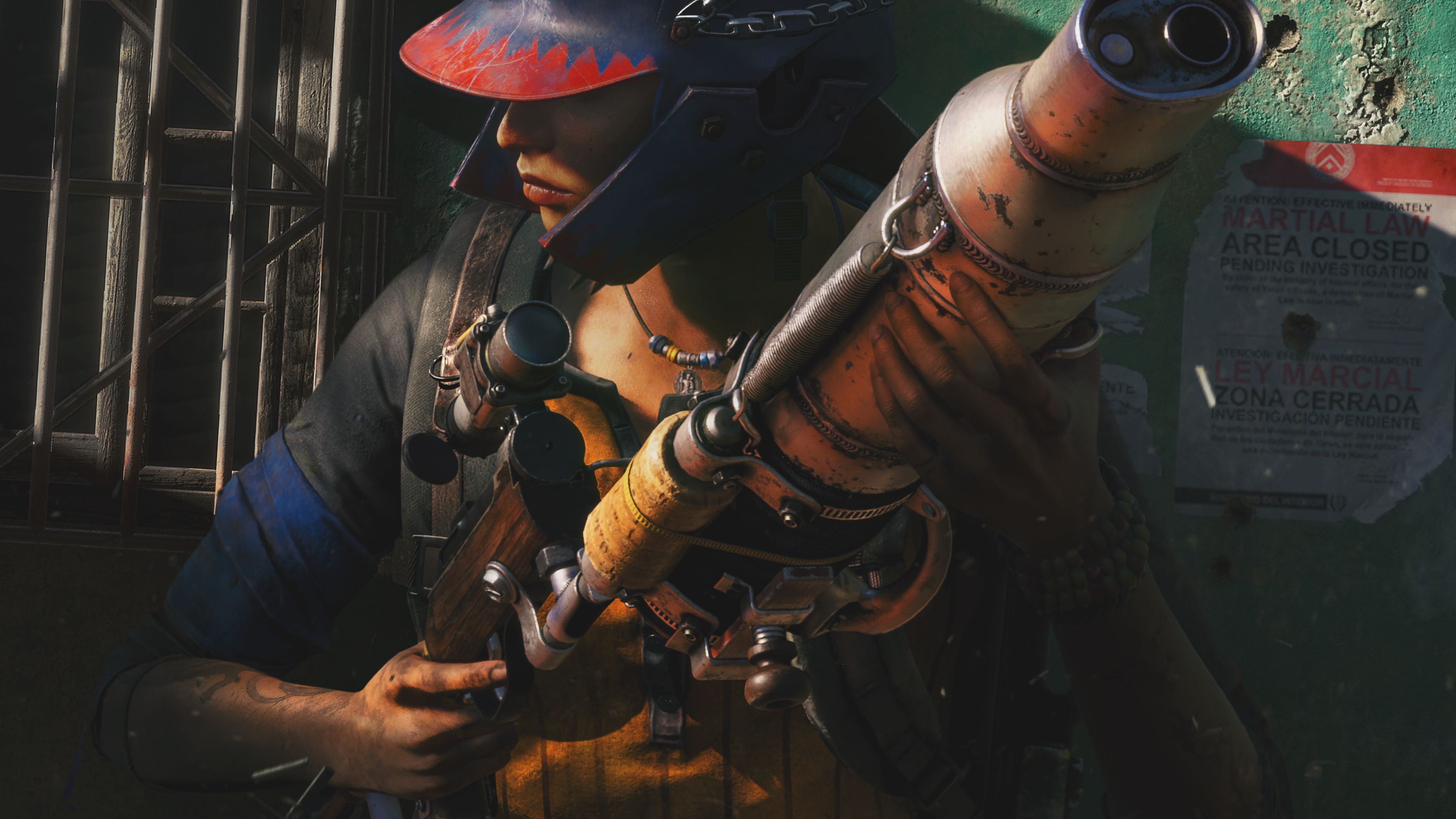 GameCentral reviews Ubisoft’s latest open world adventure and what may be the best Far Cry game yet.

Despite rarely having a single character or setting in common, games in the Far Cry series are still all recognisably part of the same franchise. They all feature a seemingly doomed fight against oppression by a single hero taking on overwhelming odds. They’re also justly famed for their lurches in tone, combining larger-than-life comedy characters with horrifying brutality. In these febrile times, it’s a balancing act that Ubisoft desperately needed to get right again.

For better or worse, Far Cry 6 is a game that definitely doesn’t pull its punches. It’s set on the fictional island of Yara, which is ‘inspired’ by Cuba. With the decaying splendour of its buildings’ brightly coloured facades, 1950s cars, and a dictatorship that trades in revolutionary language, it certain seems to have a great deal in common with Cuba. On a superficial level at least, its natural beauty, spectacular sunsets and brief but intense rainstorms make for a dramatic backdrop to your counter-revolutionary antics.

You play Dani Rojas, one of Yara’s outcasts, an underclass of orphans and the poverty-stricken, who are routinely kidnapped and used as slave labour by the regime to grow Viviro, supposedly a herbal cure for cancer. That involves spraying tobacco crops with a pesticide called PG-240, which also happens to be extremely poisonous to humans, making it an ideal chemical weapon.

Rather than go meekly along with his or her fate – you choose Dani’s gender in the opening scene – you try to escape to Miami. When that plan fails you instead join Libertad, a local guerrilla movement bent on toppling the island’s evil dictator, Antón Castillo, played with sinister aplomb by Breaking Bad’s Giancarlo Esposito. Starting with the traditional Far Cry scene-setting stroll through utter chaos and destruction, you’re soon a small cog in the revolutionary machine.

Although it’s steeped in the series’ mores, there are immediate differences in this outing. Firstly, Dani speaks. Unlike the stoically mute protagonists of recent Far Cries, Dani’s actually pretty chatty, and also apparently a music lover, regularly engaging in lusty singalongs with the stereo in whatever vehicle they’ve most recently commandeered. Male Dani’s rendition of Livin’ La Vida Loca is especially memorable.

As in Far Cry 5, you’re allowed to bring a sidekick when you head into battle. Unlike that game’s mix of humans and animals, here all your companions are beasts, from the aggressive fighting rooster, Chicharron, to disabled sausage dog, Chorizo whose back legs trundle around in a miniature wheelchair. You can direct your animal buddies around the battlefield but also need to revive them when they get shot or blown up. Other than that, they behave autonomously, targeting enemies for you and acting as a useful distraction in firefights.

Wild animals are also important. Hunting and fishing are major side activities available throughout the game’s sizeable landmass, although random attacks have been toned down significantly compared with past games. You can still receive a light mauling from sharks, crocs, eagles, and the odd mongoose but none of them is much of a threat, and their reduced incidence makes them less of an annoyance.

In fact, one thing that marks out Far Cry 6 is its powerful desire to remove anything that might conceivably become an irritation, and to give you all the fun toys to play with as quickly as it possibly can. That means you no longer have to choose between carrying a vehicle repair blowtorch and an extra gun. You also gain access to a huge arsenal of weaponry, silenced and loud, from very early in the game, along with the series’ trademark wing suit and parachute.

As well as conventional guns, bows, grenades, and rocket launchers you can also acquire ‘Resolver’ weapons, built from salvaged scrap by resident blowhard and ageing revolutionary, Juan Cortez, who provides early comic relief after the game’s nasty introductory sequence. His guns have a range of applications, from a backpack that fires guided rockets at unfortunate groups of enemies to an EMP that takes down tanks and helicopters, and a medical bag designed for use in co-op.

To get all those you need to trade supplies looted from enemy bases, army checkpoints, and corpses. That means gaining intel from rebels you encounter as you drive around the archipelago, leading you to enemy anti-aircraft installations and roadblocks. The former prevent you from flying helicopters and wing suits in their vicinity and the latter put down road spikes to stall your progress in cars, so both carry useful rewards, both in currency terms and freedom of movement.

Once you’ve cleared the way, getting around Yara is a breeze. Not only can you fast travel to any safe house, captured base or checkpoint but you can choose to be airdropped from high above them, using your wingsuit and parachute to hurtle to practically any destination in moments. Combined with PlayStation 5’s sub-five second load times, it gives an unprecedented sense of freedom.

You can also call in a ride wherever you happen to be. Your car arrives with a machinegun turret on its roof and is upgradeable, so you can add more powerful guns, a battering ram at the front, and various types of armour depending on the kind of pounding you’re likely to receive on a mission. That turns out to be one of the game’s departures in that you and your car can now change armour to defend against bullets, explosions, fire or poison. You may well find in practice you don’t often get around to that level of customisation, but if a mission’s proving too tricky it’s a way of tilting the odds in your favour.

That doesn’t happen often though. Far Cry has always had to manage the experience of your character’s inevitable transformation from plucky underdog to implacable killing machine, and in this case that tipping point occurs just after the halfway mark, or roughly when you unlock and upgrade the Pyrotechno Resolver weapon, and your Exterminador supremo backpack. Their large volumes of explosive ordnance can take down helicopters in a single volley, and tanks in two. It’s about that time that you really start to feel like a one-man, or woman, army.

Dani’s a former soldier, making their comfort in holding and using firearms less jarring than past episodes, where the hero’s sudden penchant for slaughtering henchmen is at odds with their life as a civilian. It’s still sometimes an uneasy mix of comedy and ultra violence, although this outing’s jokes seem to land more evenly than they have in recent episodes. Without the humourlessly militaristic realism of Ghost Recon, the comic book violence feels somehow less egregious.

It’s a tightrope though, and despite Ubisoft’s avowedly apolitical approach, the islanders’ attitude towards Americans, or ‘Yanquis’ as they have it, takes in both their early reliance on slave labour and its replacement with a private prison system built to create an indentured workforce. Interestingly, one of the game’s arch-baddies, whom you need to deal with on your way to offing El Presidente, is a chemical weapons manufacturing money man who turns out to be Canadian rather than the evil Yanqui he initially appears to be. He even makes a point about Canada’s treatment of its indigenous population, making sure nobody is above reproach.

It’s a theme that runs through the game. In a first for the series there are regular scenes where your character isn’t even present, showing Castillo inculcating his 13-year-old son into the ways of being a dictator. They’re expectedly brutal, but his son’s conflicted, and while he’s no white knight, he’s clearly more aware of the misuse of power than his father, who seems perfectly at ease with the rivers of blood his reign creates.

Gunplay is as effective as ever, and while in the early part of the game enemies can be frustratingly bullet-spongey that all goes away when you start upgrading. Aircraft are fun to fly, and vehicles actually handle reasonably well. Importantly, the way activities and side stories are incorporated into both the plot and environment gives the game a newly coherent feel, with extra-curricular activities feeling more like entertainment than distraction.

Treasure hunts also make a welcome return, each one forming its own miniature story and puzzle, with no two even remotely similar. Taking on a scattering of races, raids, checkpoints, treasure hunts and story missions gives a solid impression of variety that only starts to wear thin a long way into its 50+ hour play time. Clearly that level of commitment won’t be for everyone, but if you enjoy taking in the fully panoply of non-story missions, there’s enough here to make it more lifestyle than game, for a few weeks at least.

There are glitches. We needed to restart the game a couple of times, and there was one mission we eventually had to abandon altogether after it auto-reset itself for the third time, but for a game of this scale it could have been worse. Given its inspiring diversity, if you’re not enjoying a quest or something goes wrong, there are always fresh delights around the next corner.

Dani is a charming and convincing revolutionary and even though the action amounts either to traversal or shooting people, the way the story and side missions work together keeps things feeling fresh and lively throughout the lengthy play time. And you will never read the word ‘guerrilla’ in your mind in quite the same way again. After playing this, it will forever rhyme with ‘mama mia’.

In Short: Colourful and brutal, funny and horrifying, Far Cry 6 is the distilled essence of its franchise, as well as a richer and more coherent experience than recent outings.

Pros: Spectacular scenery and greatly reduced HUD clutter make the most of its tropical setting. It also has superb mission variety, great characters, and a wonderfully dark sense of humour.

Cons: Aiming the tank’s gun is an unnecessary chore and the game’s blend of savagery and comedy will sit uneasily with some. Each time you cross into a new district its name appears, needlessly removing every other element of your HUD.