You are here:
Home / Fan-Made Half-Life Comic Explores The Aftermath Of Combine Invasion

Half-Life has a huge time jump between the first two games as we follow Gordon Freeman, the scientist turned super-soldier who gets put in stasis by a dodgy man in a dodgy blue suit. But A Place in the West seeks to fill this gap.

Penned by Michael Pelletier and Ross Joseph Gardner, A Place in the West is an officially licensed fan-made comic series that you can pick up on Steam right now. There are currently seven chapters, all available for £1.69, with an eighth underway.

The first recaps Half-Life, detailing the Black Mesa Facility, what went wrong with the experiment, the discovery of the border world Xen, and G-Man's involvement. But it goes a step further, tying in Half-Life 2's new characters retroactively, giving them a place in the first game's story more directly. For instance, in the first issue, we see G-Man bringing an alien crystal to Eli Vance, with administrator Wallace Breen also bringing Gordon into the fold. 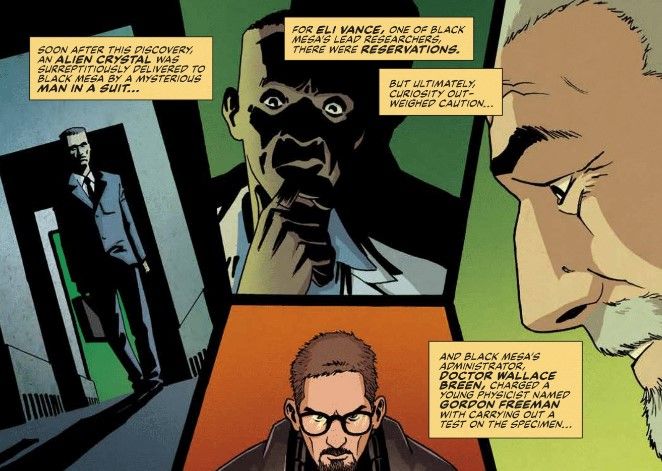 We even see Breen watching as the military invades the facility. This is particularly interesting because, in the original game, there aren't many named characters, certainly none from 2 aside from G-Man. The guards are all called "Barney", becoming Barney Calhoun in the Gearbox expansion Blue Shift, while scientists were copies of four skins, again until the Gearbox expansions. But those didn't introduce anyone who stayed around for Half-Life 2.

The first comic goes on to show Breen becoming Earth's leader, the 7-Hour War, the building of the Citadel, the downfall of humanity, the formation of the Metrocops, the birth of the Rebellion, and the early seeds of City 17. There are even hints of scrapped Beta designs, Walking Dead-like visuals of zombies roaming the streets, and a new plot line. A cosmic tower has appeared in a hidden city, a tower that could be humanity's "salvation or its doom."