As one of the most downloaded and played Game Pass titles, more players than ever are giving West Virginia's take on the nuclear apocalypse a chance. Given its multiplayer nature, plenty of folks wonder if you can play Fallout 76 single player. Some players may want to attempt surviving Appalachia alone, whether it be your personal preference or lack of friends interested in playing.

With each future update or expansion, Fallout 76 looks more and more like the classic single-player titles that came before. More NPCs fill the world than ever before, so maybe now is the time for those who prefer single-player to give it a go. Fallout 76's vision was indeed formed around playing with friends, but now more than ever, a solo run is not only possible – but promising.

Updated on January 4, 2023, by Branden Lizardi: The game continues to expand and update, introducing new mechanics, items, enemies, and locations. All that new content entices new players, many wanting to play Fallout 76 solo. Beyond that, new meta strategies and community practices have been developed that will help anyone trying to play on their own. With this in mind, we've expanded our list of tips accordingly. 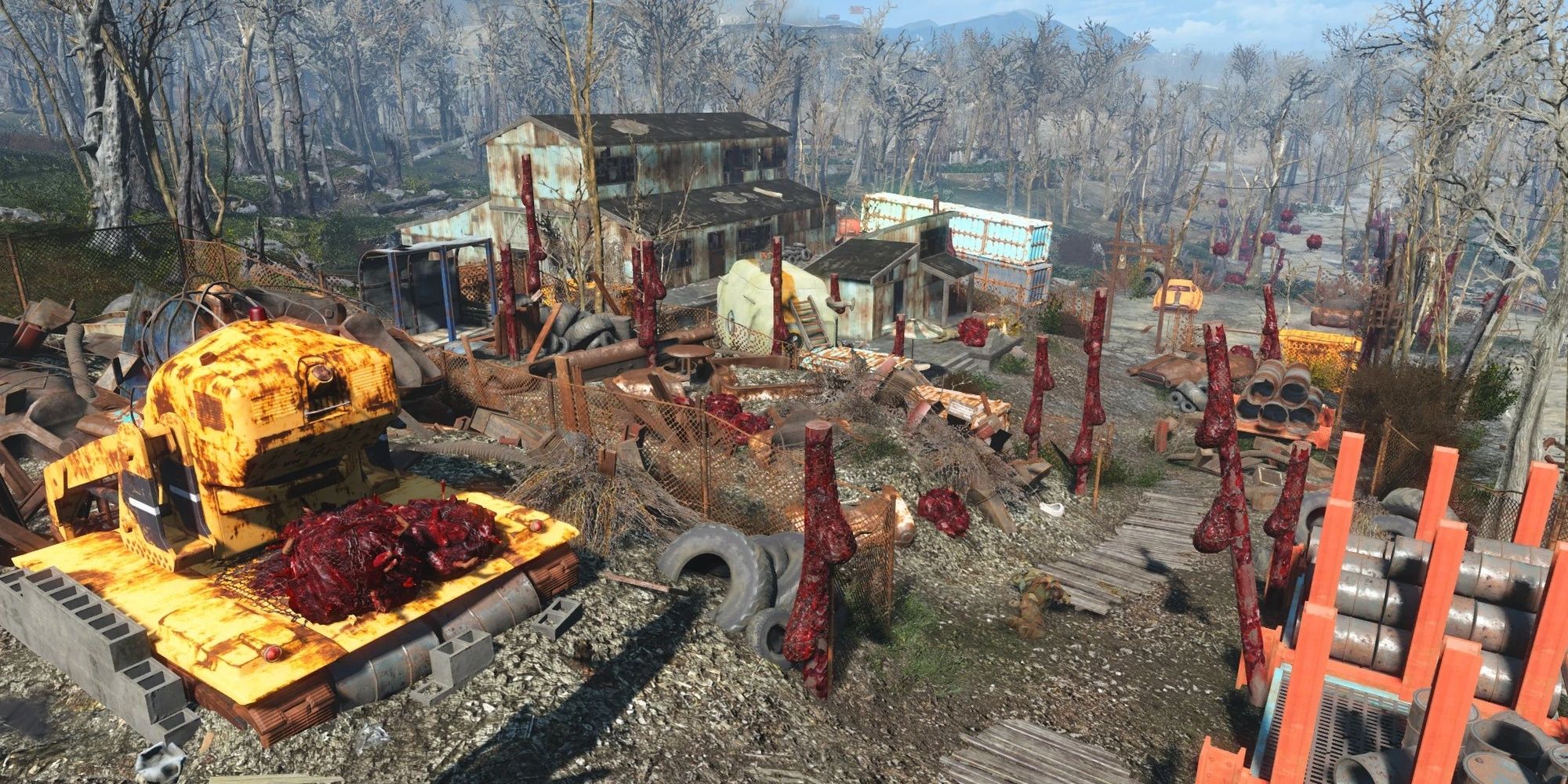 The only surefire way to get stronger in Fallout 76 is to explore. Exploration is a critical element to open-world games in general but is arguably more important in a game that consistently pits you against other players. Most of these players have probably teamed up, immediately putting you at a disadvantage.

Exploring Appalachia is one of the true highlights of Fallout 76, yes, even when the game was riddled with bugs and technical issues back when it launched. As a solo player, the more you explore, the more you will be able to find coveted loot, fantastic outposts, and serviceable hiding spots for when the need arises. Get as familiar with Appalachia as you can, especially early on in the game.

14/15 Find The Best Weapons For Your Preferred Playstyle 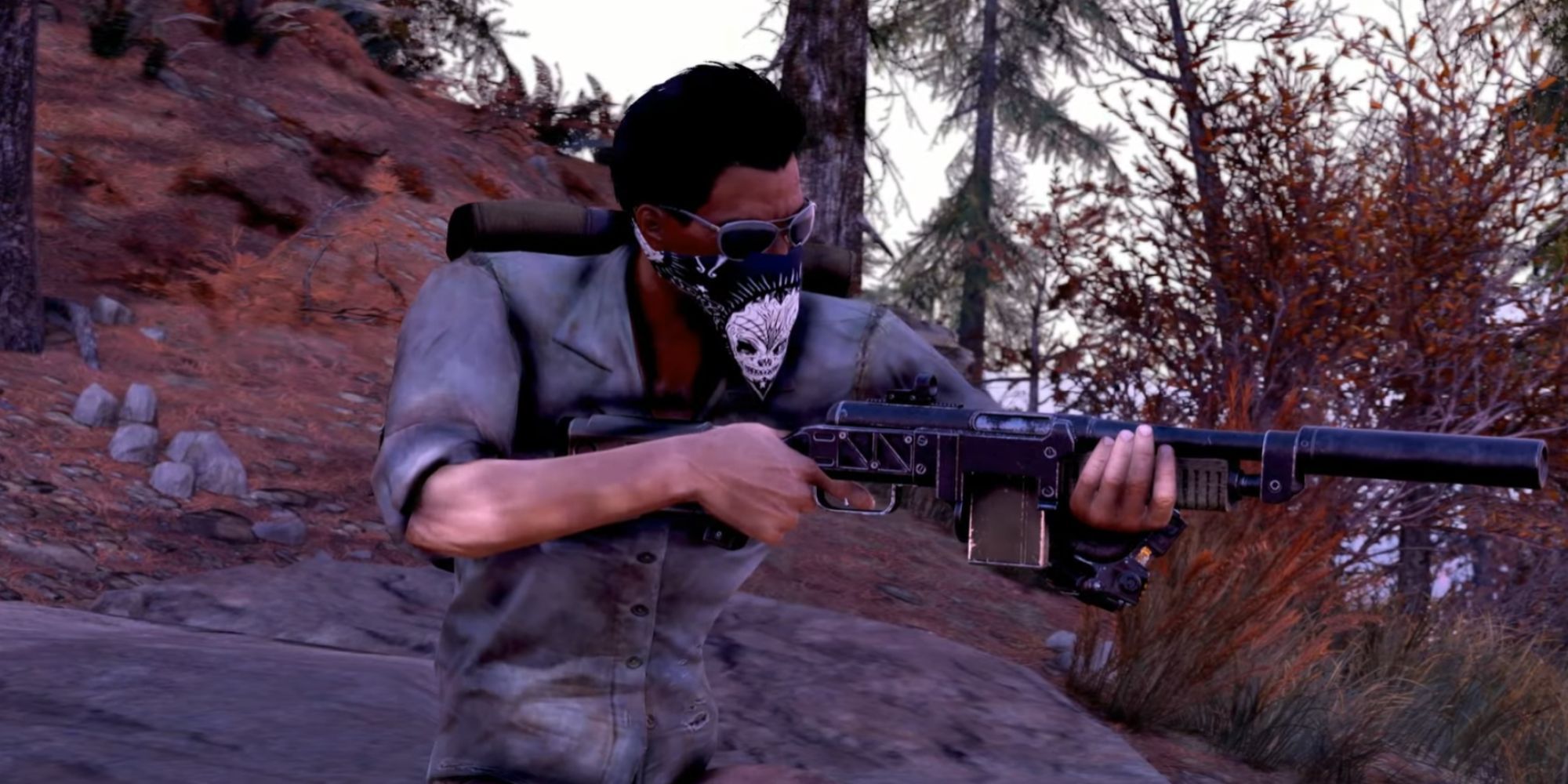 How are you going to spend your time playing Fallout 76? Are you going to focus on stealth, moving in silently to take down any unsuspecting mutants or foes? No matter how you choose to play, you will need to get to grips with the various guns and weapons in and around Appalachia.

Solo players lack what teamed-up players have, namely, a diversity of skills and weapons. As soon as you start having the option to utilize various weapons, find at least two or three that you feel extra confident with. You are a much more formidable lone wolf if you have your go-to weapons from the start. 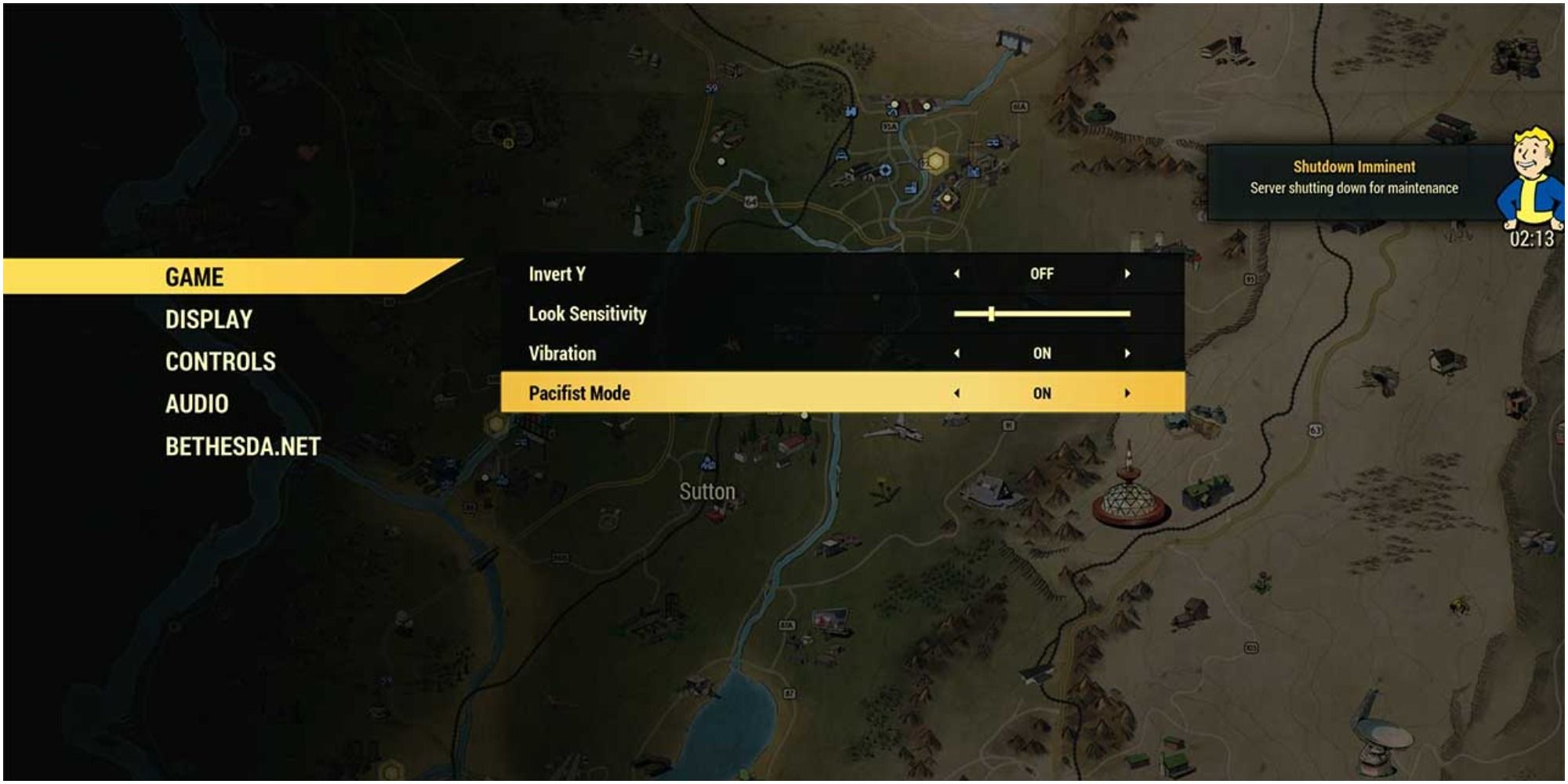 Turning on pacifist mode in your options menu is a great place to start. Enabling Pacifist Mode disables your ability to damage other players. While this is helpful on a surface level, it goes a bit deeper. Players who still attack you regardless will find it more challenging to damage you significantly and, on top of that, are branded a murderer on the map.

Bounties are placed on these types of players to not only deter them from doing so, but the bounty incentivizes other good-natured players to come to your aid. Pacifist mode is a must but doesn't completely erase the threat other players pose. Luckily, it's still just an option in settings, meaning you can turn it on and off as you please. 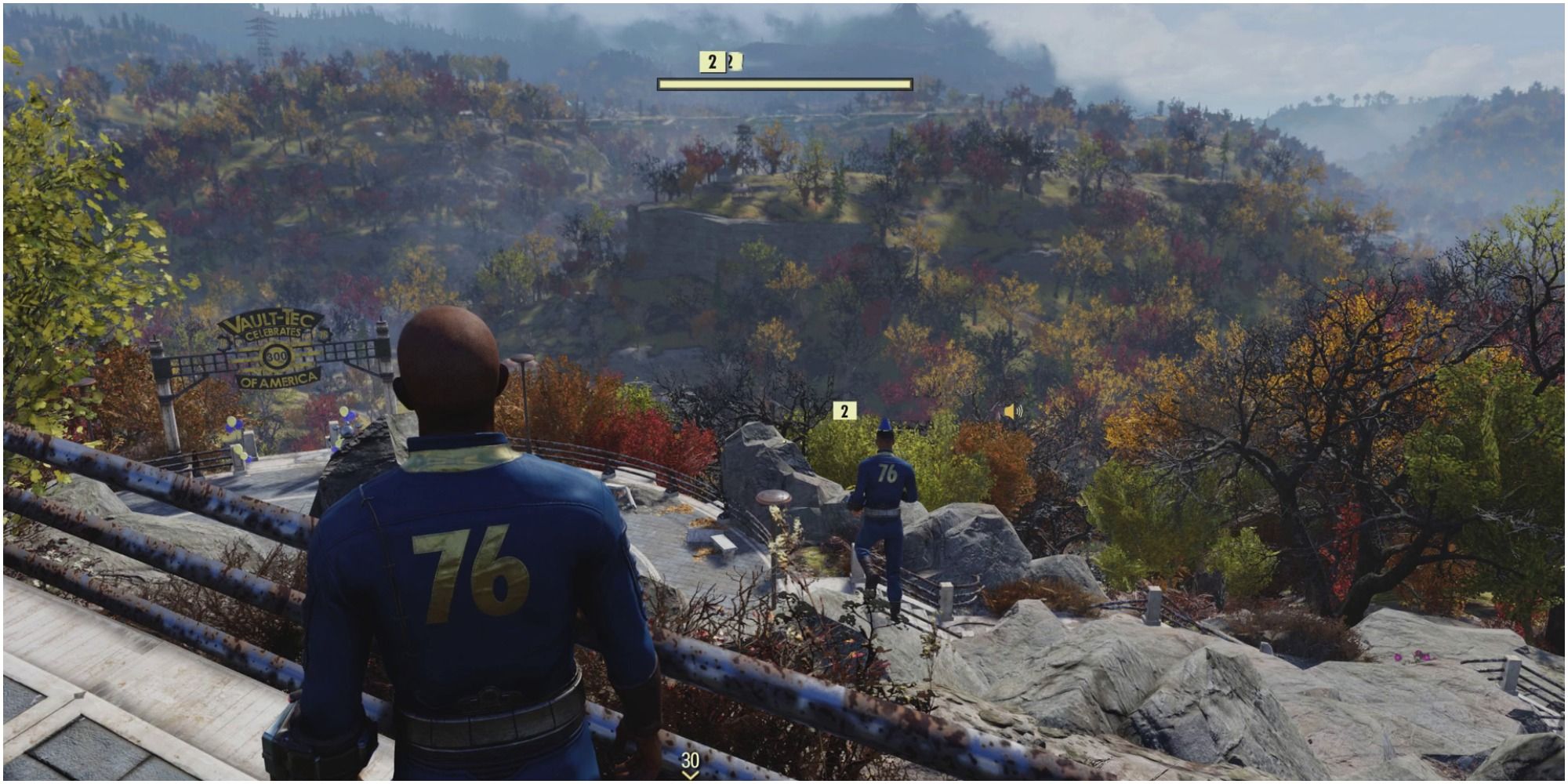 This entry may seem obvious, but it could prove crucial for single players. Utilizing the map, players can see every individual player on the same server. Other players are represented by small dots, revealing their usernames and level.

For some, never seeing another player may be preferred as their usual immersion relies on them being the lone wanderer of the wastes. Utilizing the map may not always be a perfect answer for avoiding the potential dangers of other players. Still, it will improve your odds and get players used to using the map, something crucial for this style of game regardless of playstyle. 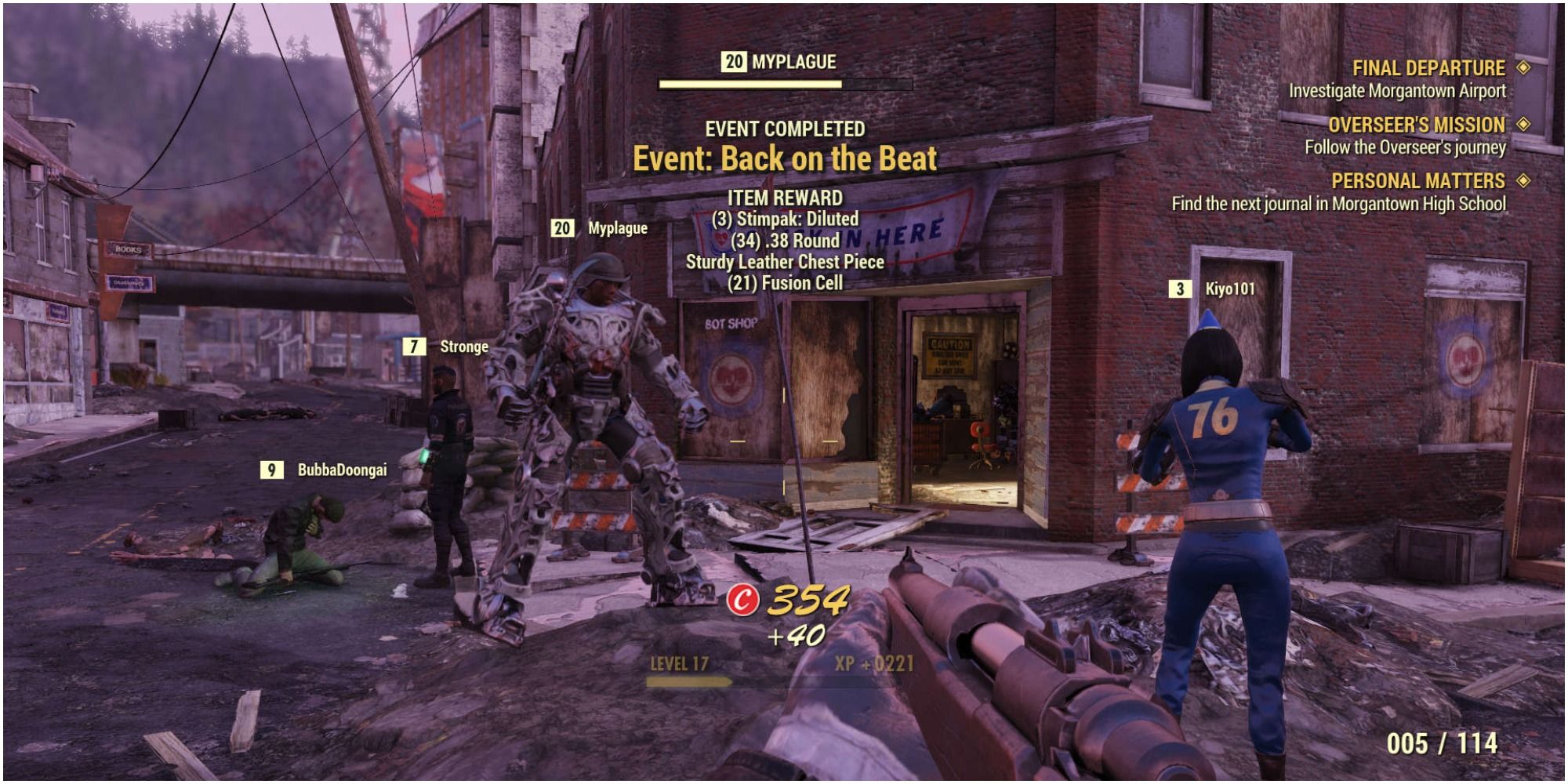 Public Events don't evoke playing alone. Public events are meant for multiplayer parties to participate in and involve several other players converging to one spot at once. Players may want to give it a shot regardless simply due to the rewards.

Public Events offer good loot and experience points. Single-player players may be willing to forego their immersion if in need, so it's worth knowing that these events are usually relatively entertaining. However, those committed to going the solo route all the way through should avoid them. 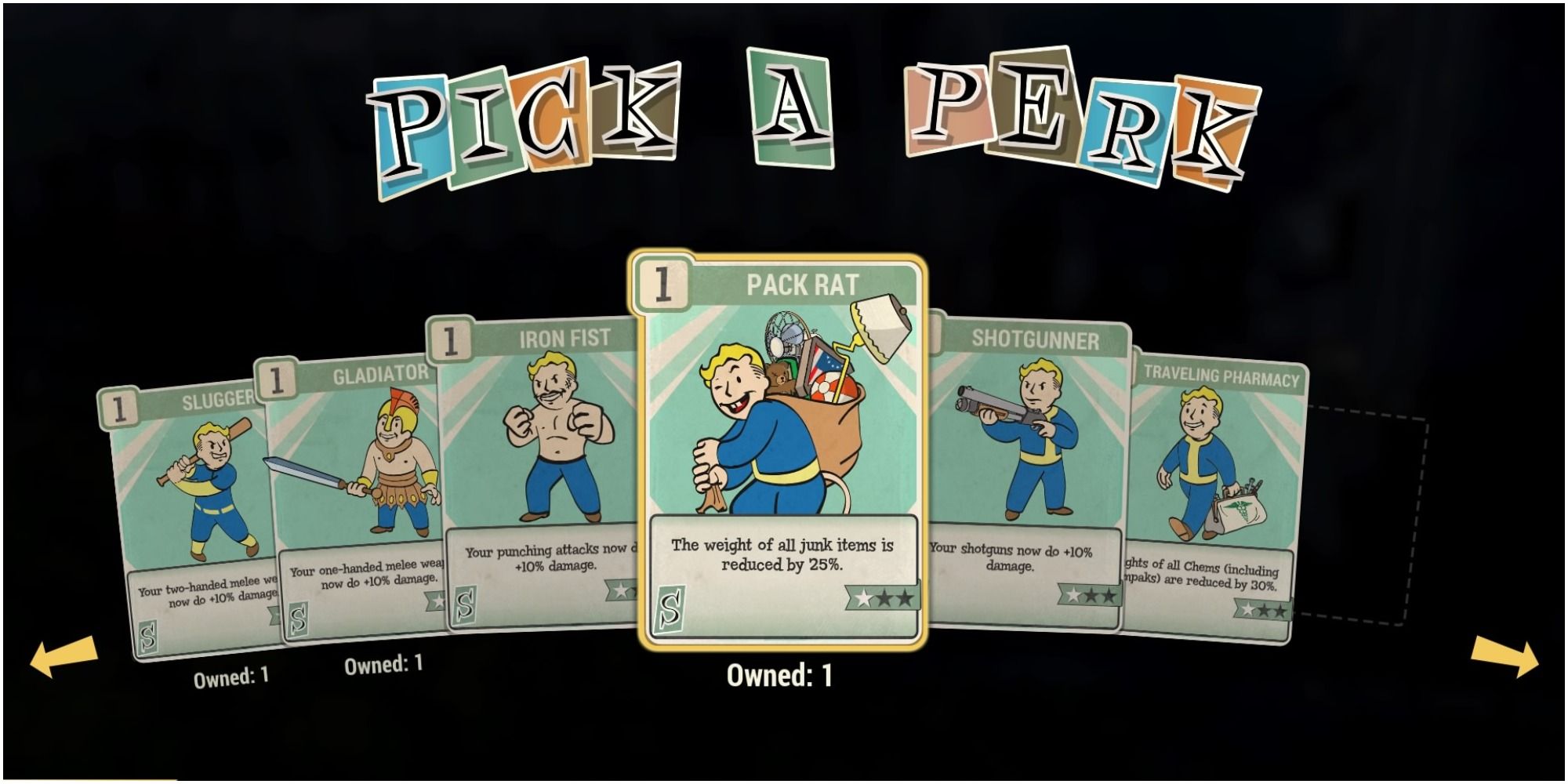 Investing in your melee skill early on almost guarantees that you will do reasonably significant damage right away, and always having a weapon at the ready is smart. Melee weapons are a dime a dozen in these wastes, and ammo crunching simply doesn't apply to them.

On top of always having a melee weapon, investing in shotguns makes you prone to doing considerable damage early on in more ways than one. Also, if aiming is a pain, shotguns could be the way to go, regardless. Who doesn't enjoy a good shotgun? 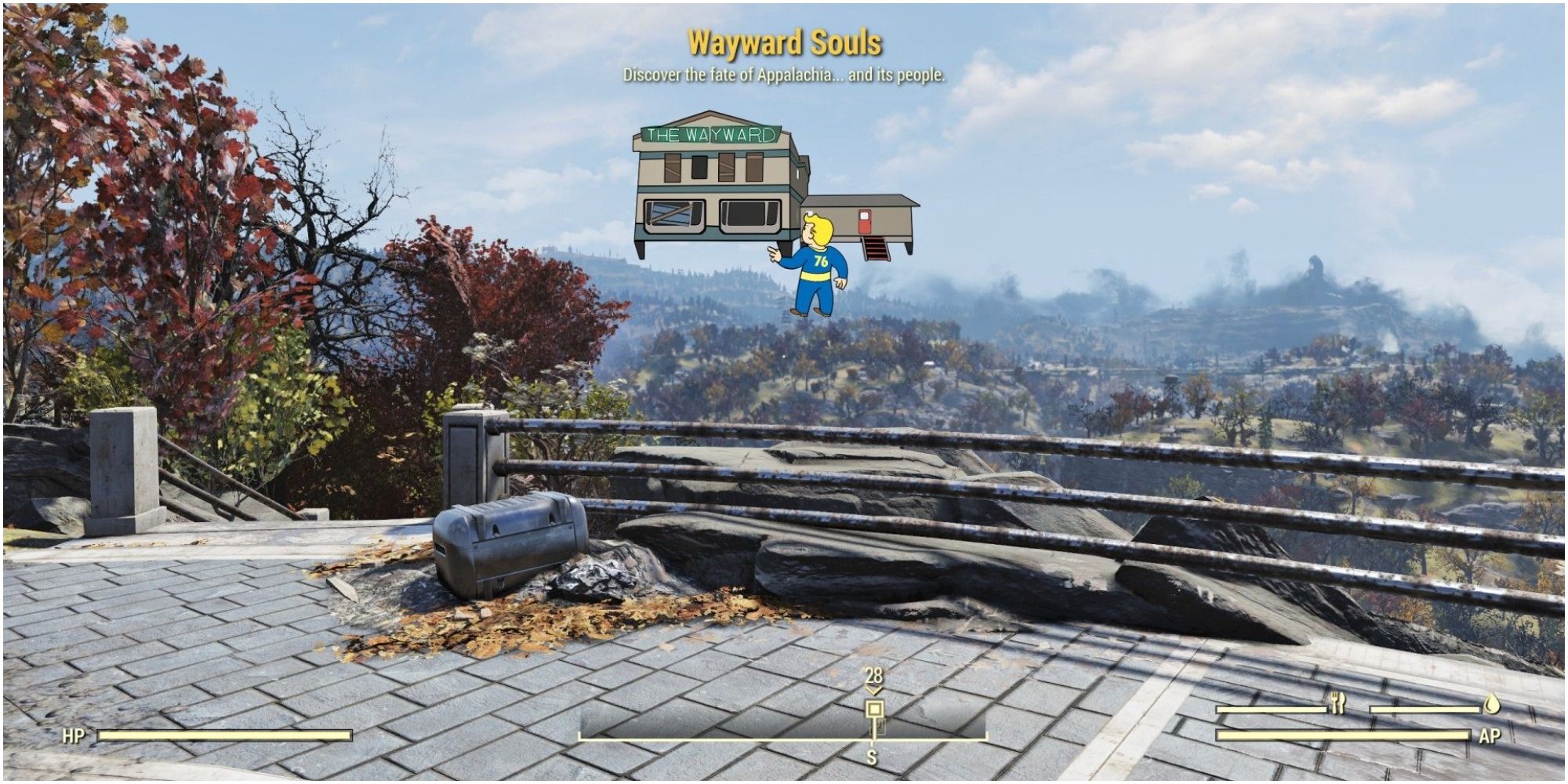 Sticking to the main quest and related side quests for a moderate amount of time guarantees that new players will understand their place in the world, fun new unique lore, and a lot of the basics revolving around this unconventional Fallout title. Following this line of quests also assists with acquiring workbench plans early on. It is worth noting that rewards do scale to your level.

Taking that as it is, having rewards scaled proves both valuable and troubling. Following other questlines will give you similar loot and rewards but won't offer the benefits of learning the plans mentioned above – though the rewards will be way more fruitful the higher your level. So, finding a balance between reward scaling and learning the basics while completing the main quest could prove very useful. 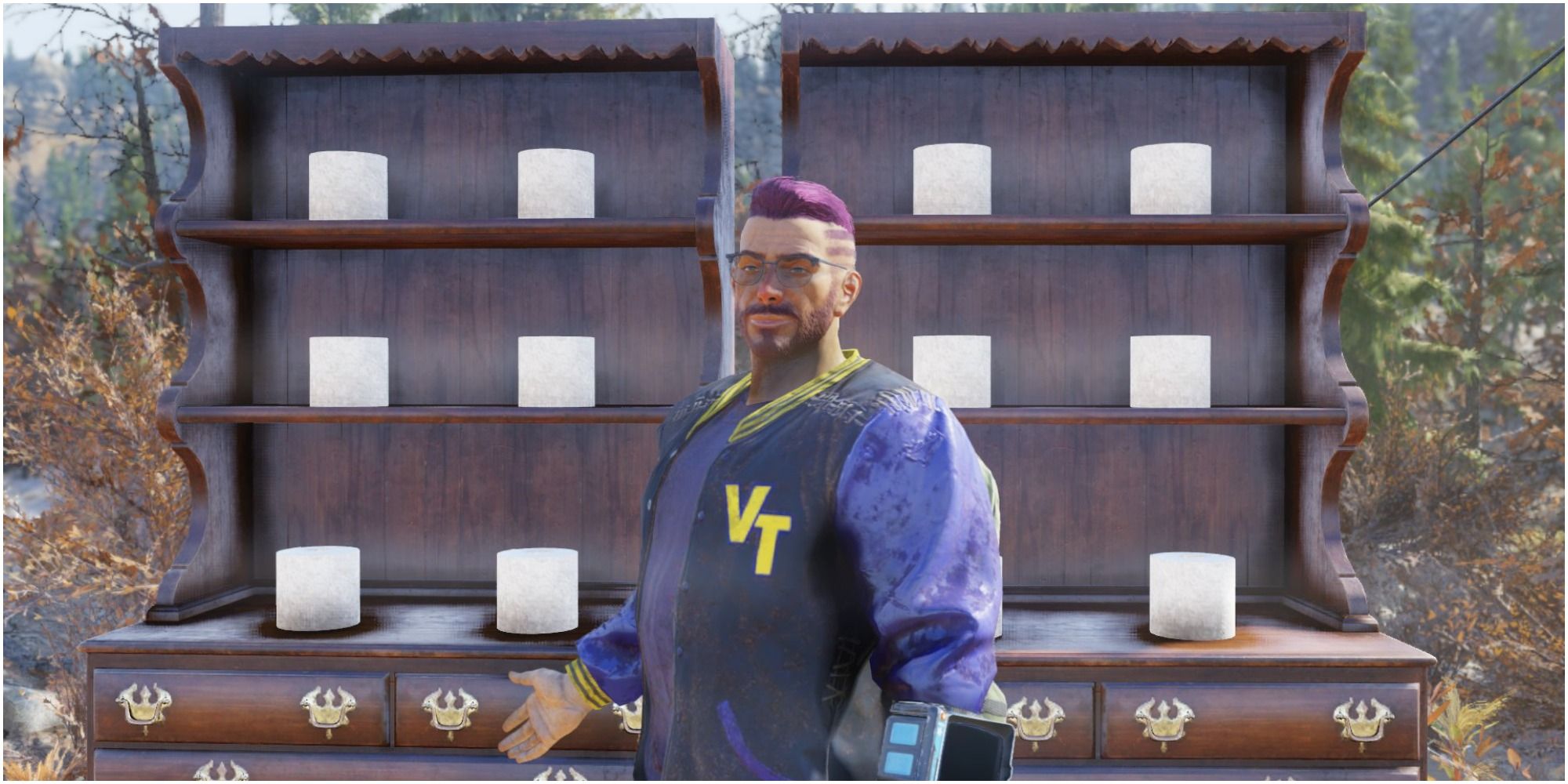 This time around, having more of a survival element means players won't carry as much or save everything they find. Most things that have been weightless in your inventory in past games now have some bulk to them. Yes, even Bobby pins.

More importantly, stocking up on every ammo type imaginable won't be ideal. So, sticking to a few specific types you are using at the moment would be much more effective. On top of that, players can scavenge or craft other types if desired if they come across a new shiny weapon that piques their interest. 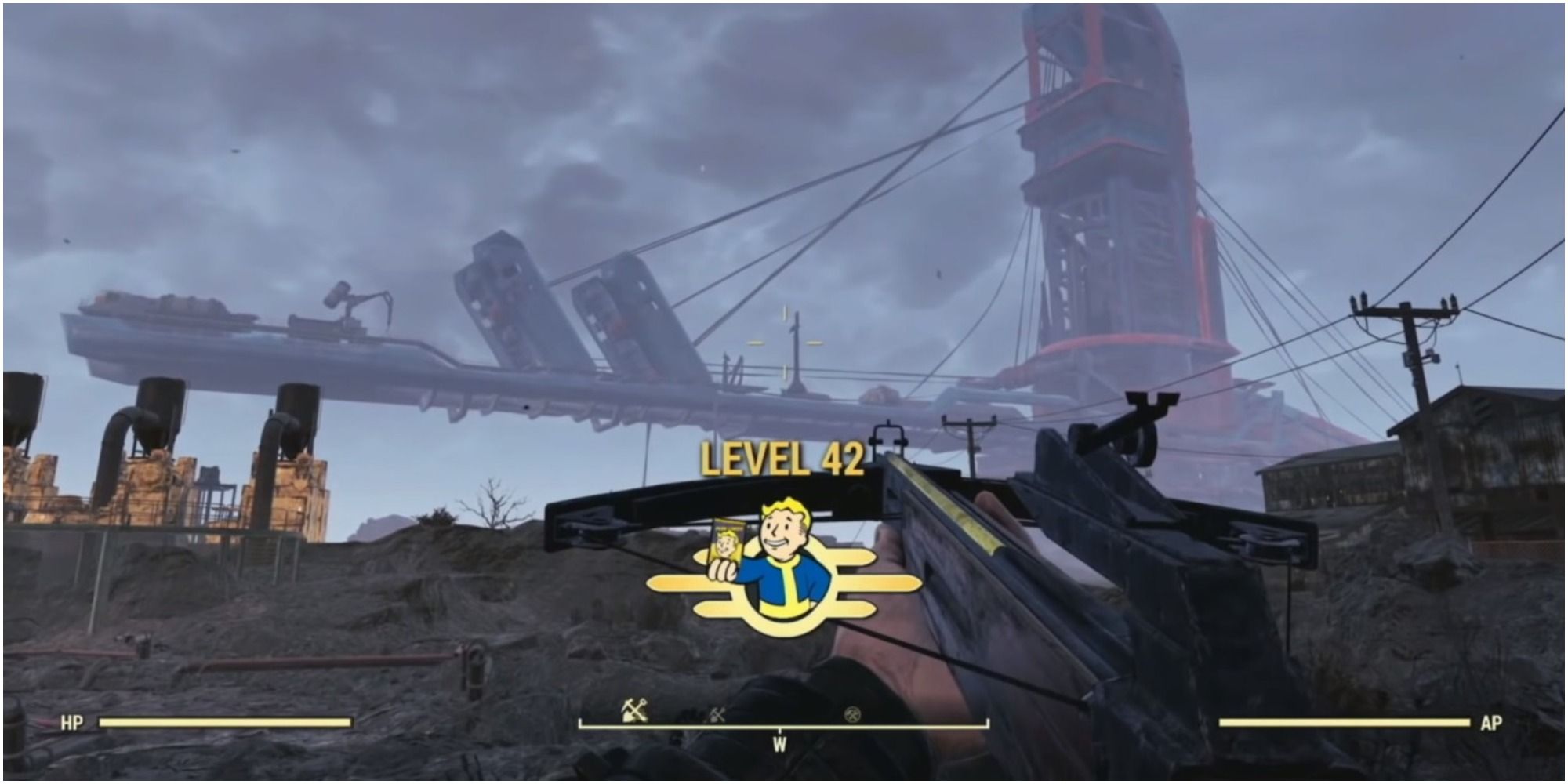 Yes, it's obvious. However, those playing single-player should target even higher levels than expected. You won't have others to rely on, as the game assumes. Therefore, grinding before attempting anything dire may be beneficial. Admittedly, grinding may become an annoyance, but utilizing this to experiment with other activities could also prove helpful.

Doing nearly anything gives your character experience points. Cooking, discovering locations, building, and crafting are all extremely beneficial and rewarding experiences. As you approach essential segments in the main quest, you'll need to be relatively higher level. 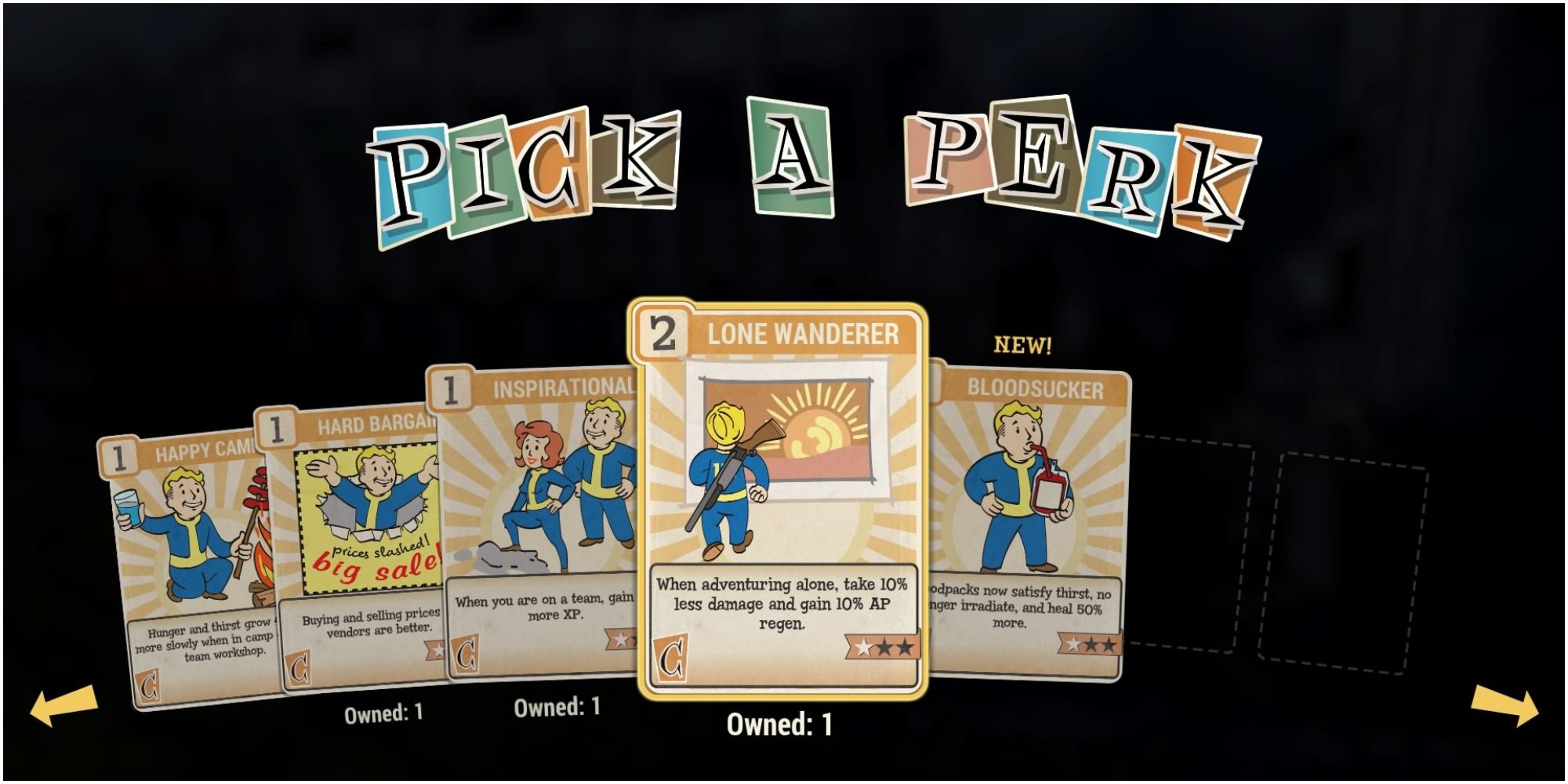 There's a perk in the Charisma skill tree called Lone Wanderer. Not only does the card's name revel in the single-player mindset, but this perk buffs your damage reduction and adds faster action point regeneration when traveling solo. This card is available exceptionally early on too.

It requires four points invested in Charisma, but those familiar with the Special skill tree and cards will know it is very doable from the get-go. It's also pretty refreshing that this perk card exists for the familiar title and for the players expected to favor this type of playstyle.

5/15 Focus on Food and Explosives 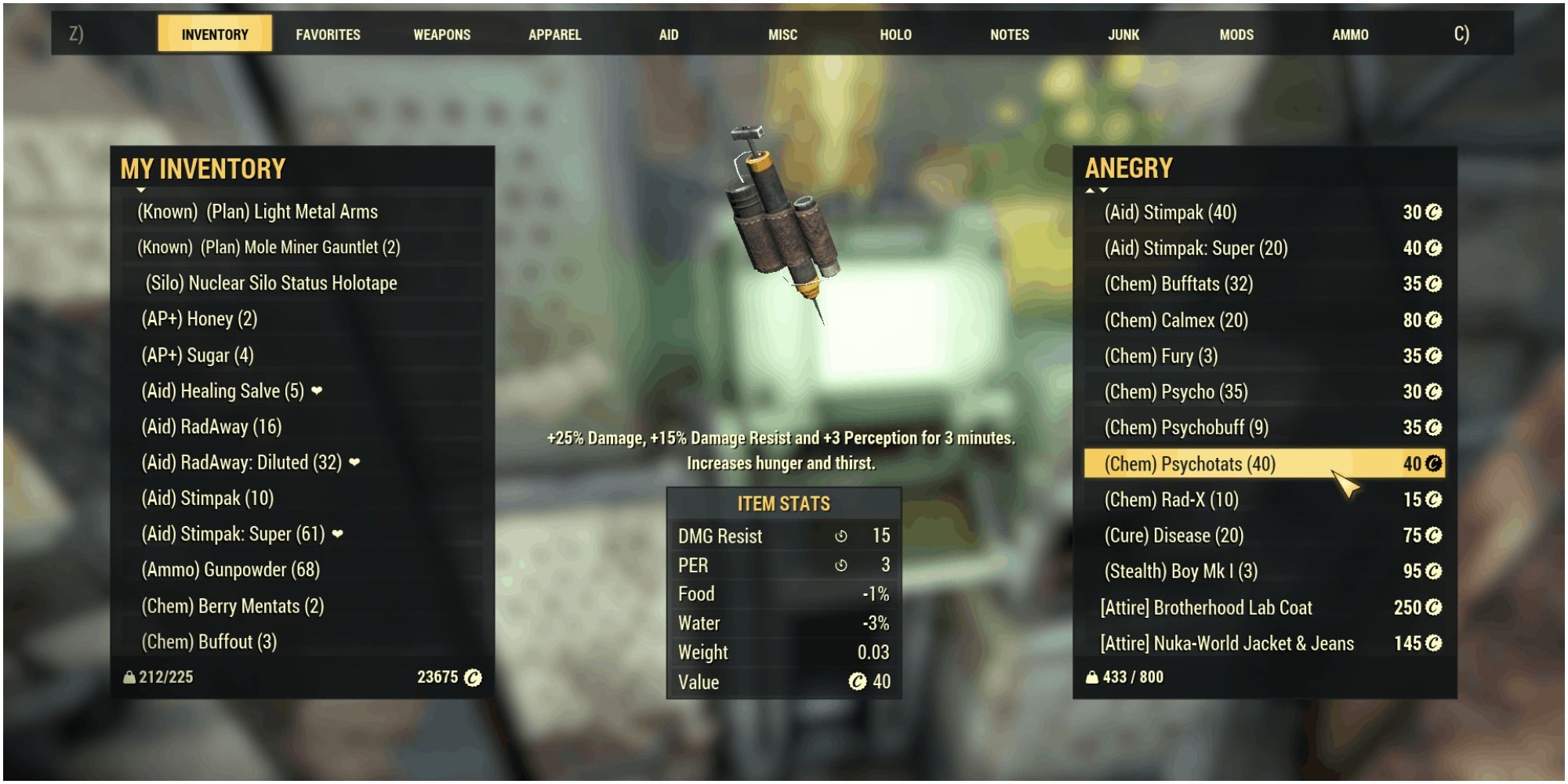 With weightless items becoming nearly nonexistent, players need to pick and choose what to keep in their limited inventory. With ammo being reasonably hard to come by early on, focusing on food and explosives could prove very useful. With food, buffs stack and last at least thirty minutes each.

Explosives could be what saves a solo player. They pack a punch, so if surrounded, laying down a bunch of mines or explosives of choice could be what keeps you alive. Wait for enemies to bunch up, and send them flying. 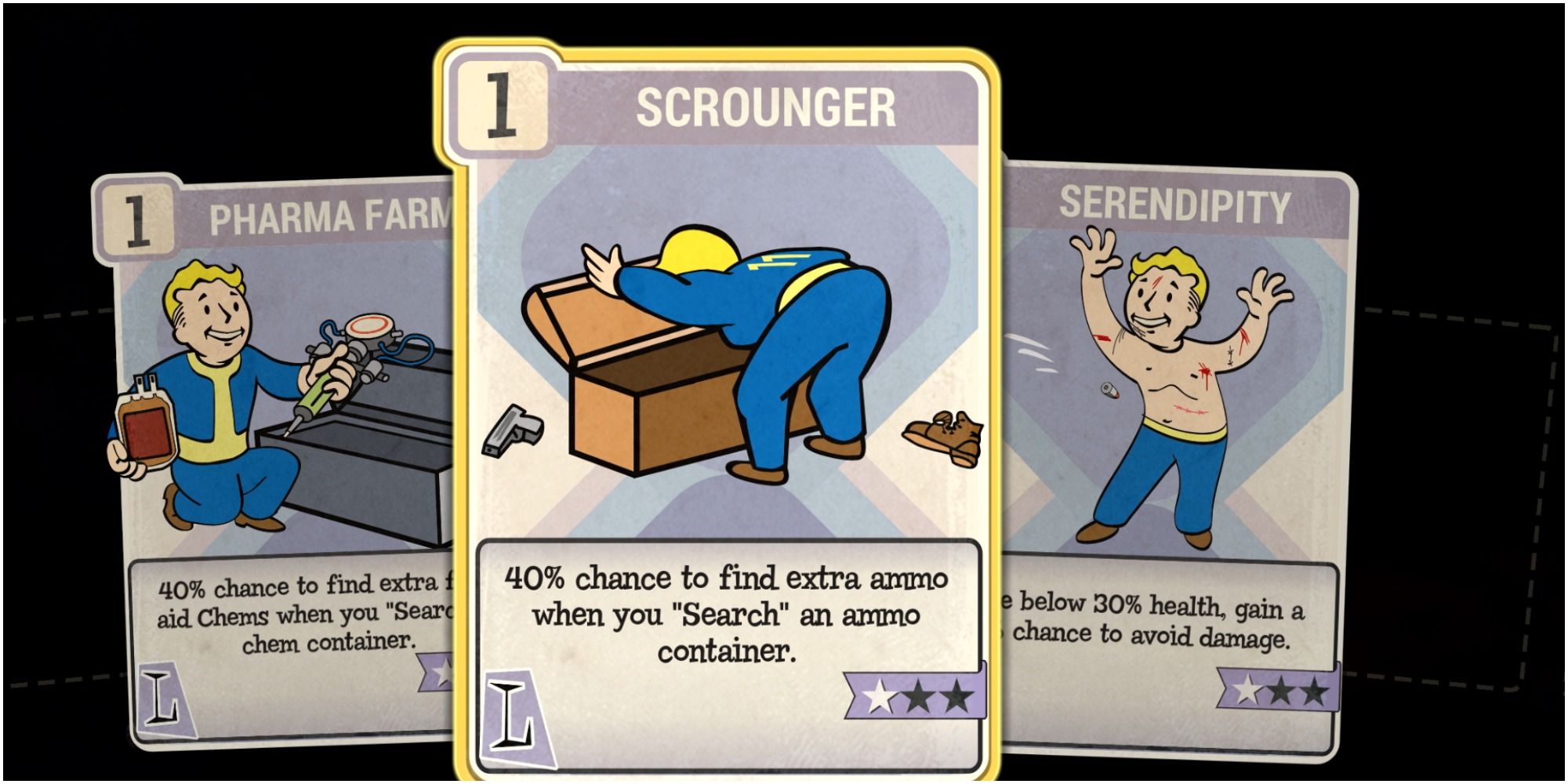 One Special skill perk to invest in is Luck. While it may seem a bit odd compared to the others, single players could reap some genuine benefits. Improving your luck skill and choosing the perks that enhance the number of items found dramatically increases your chances of staying stocked accordingly.

The perk card "Pharma Farma" grants a 40 percent chance to find more chems when looting. "Scrounger" and "Can Do" do the same thing for ammo and canned food, respectfully. Luck is also just an all-around fun perk to invest in.

3/15 Check Out Other People's Camp Shops 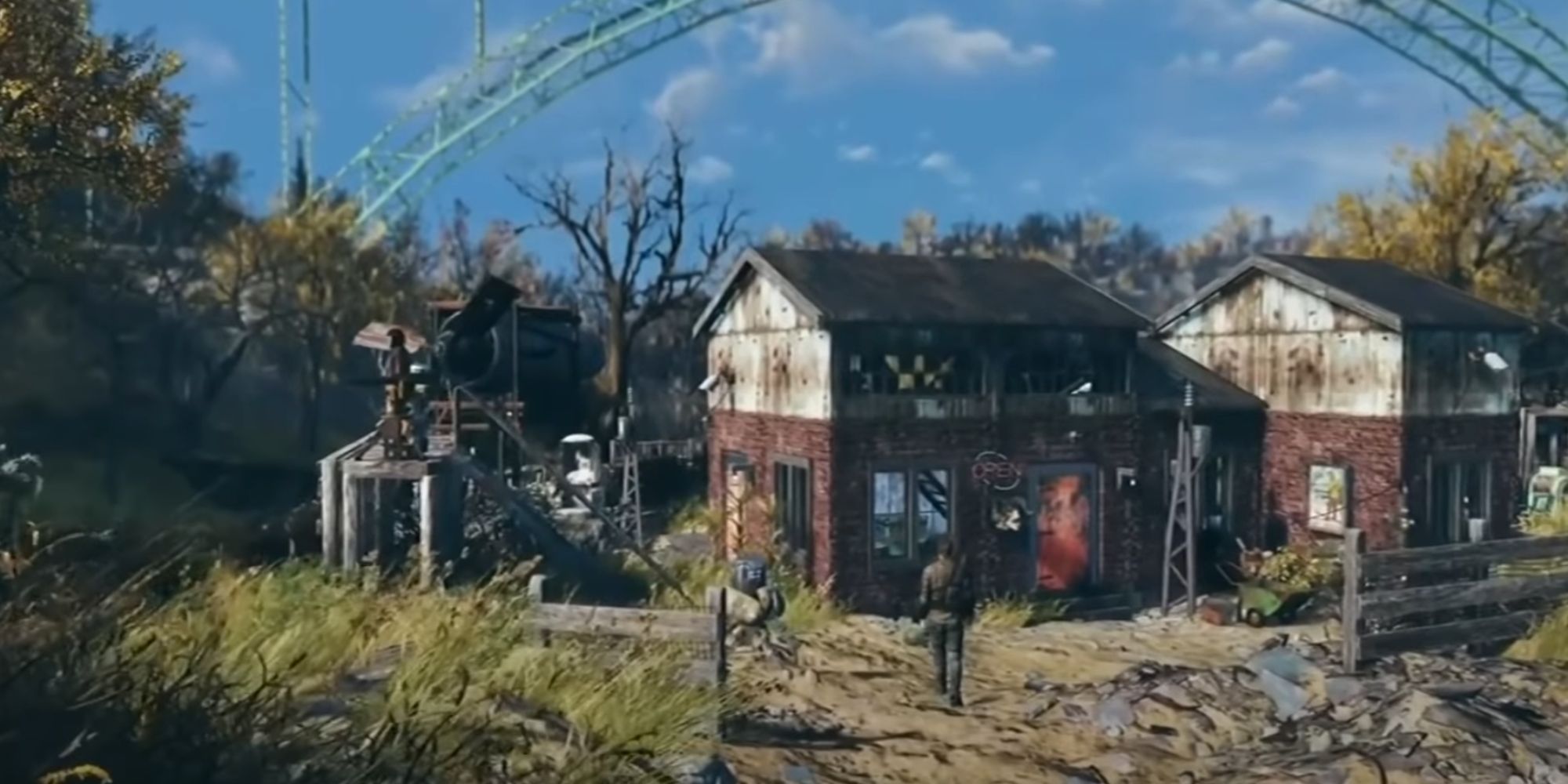 While other players won't always be helpful to you, their home camps might! Oftentimes, other players on the server will have a shop set up, selling items like ammo, blueprints, and weapons or armor with Legendary effects. These items are sometimes sold for a great value since they are leftovers or duplicates of items they already have. If you're lucky, you might even get the ammo for free.

Why not turn that capitalistic kindness in kind? By this point, you're well aware of how often you come across equipment and ammo; you could set up your own Camp store, selling items and equipment you gathered but don't need. It's a great way to help out fellow vault dwellers, potentially making yourself some extra caps in the process. 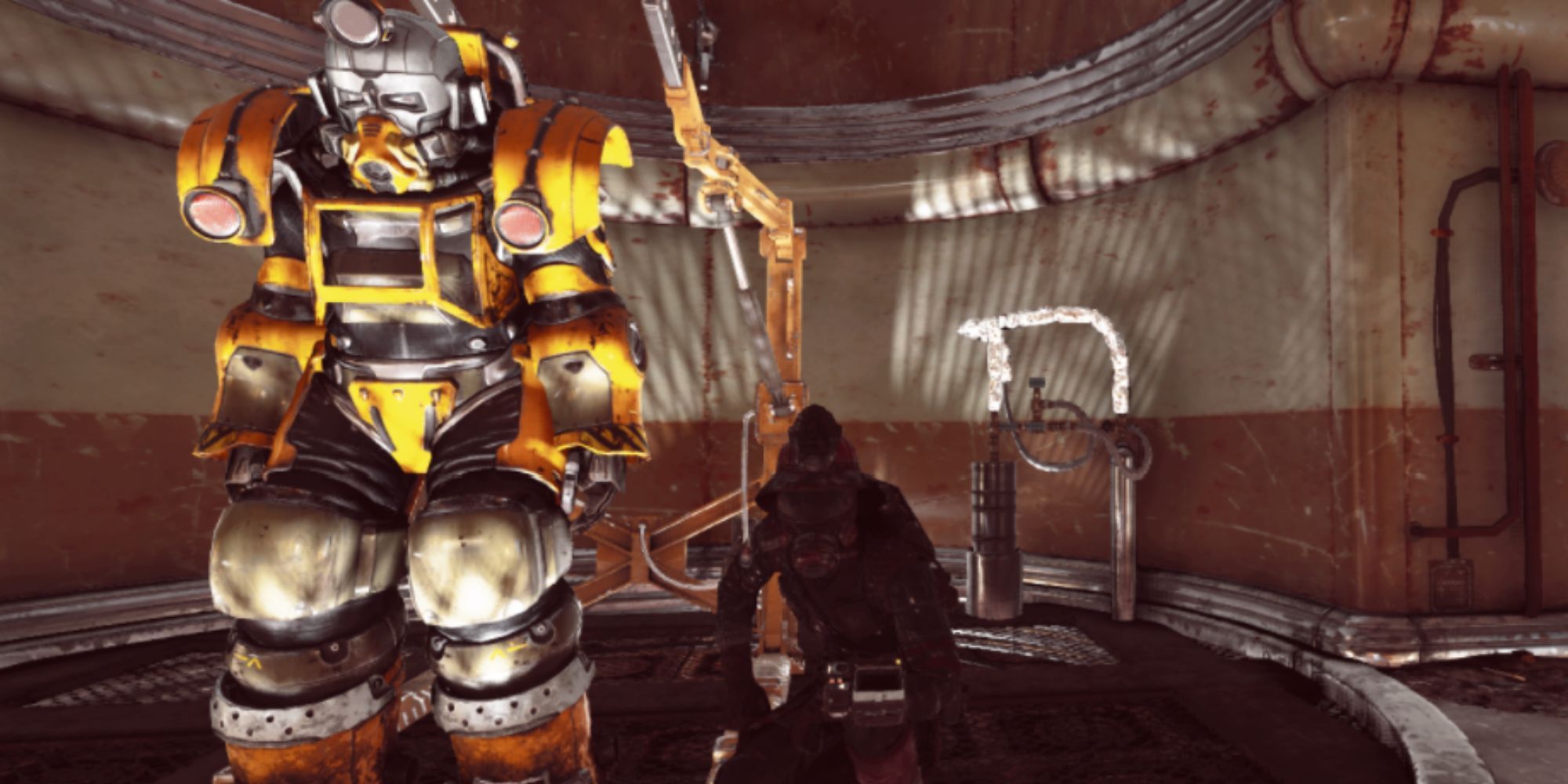 In a game world designed around multiple players and groups, you'll inevitably encounter areas or challenges that are simply too powerful. And while going in guns a-blazin' is a lot of fun, it's not a strategy that tends to last very long. When stuck between a rock and a hard mutant, there's only one thing left to do: hide.

Stealthing effectively opens the door for a few life-saving mechanics. You can heal, slowly, from items like food and salve, you have enough time to change weapons and equip explosives, and you can deal sneak attack damage. We've launched nukes on our own using this method. It is a slow one, though. If your problem is time-sensitive, this may not be the best approach.0 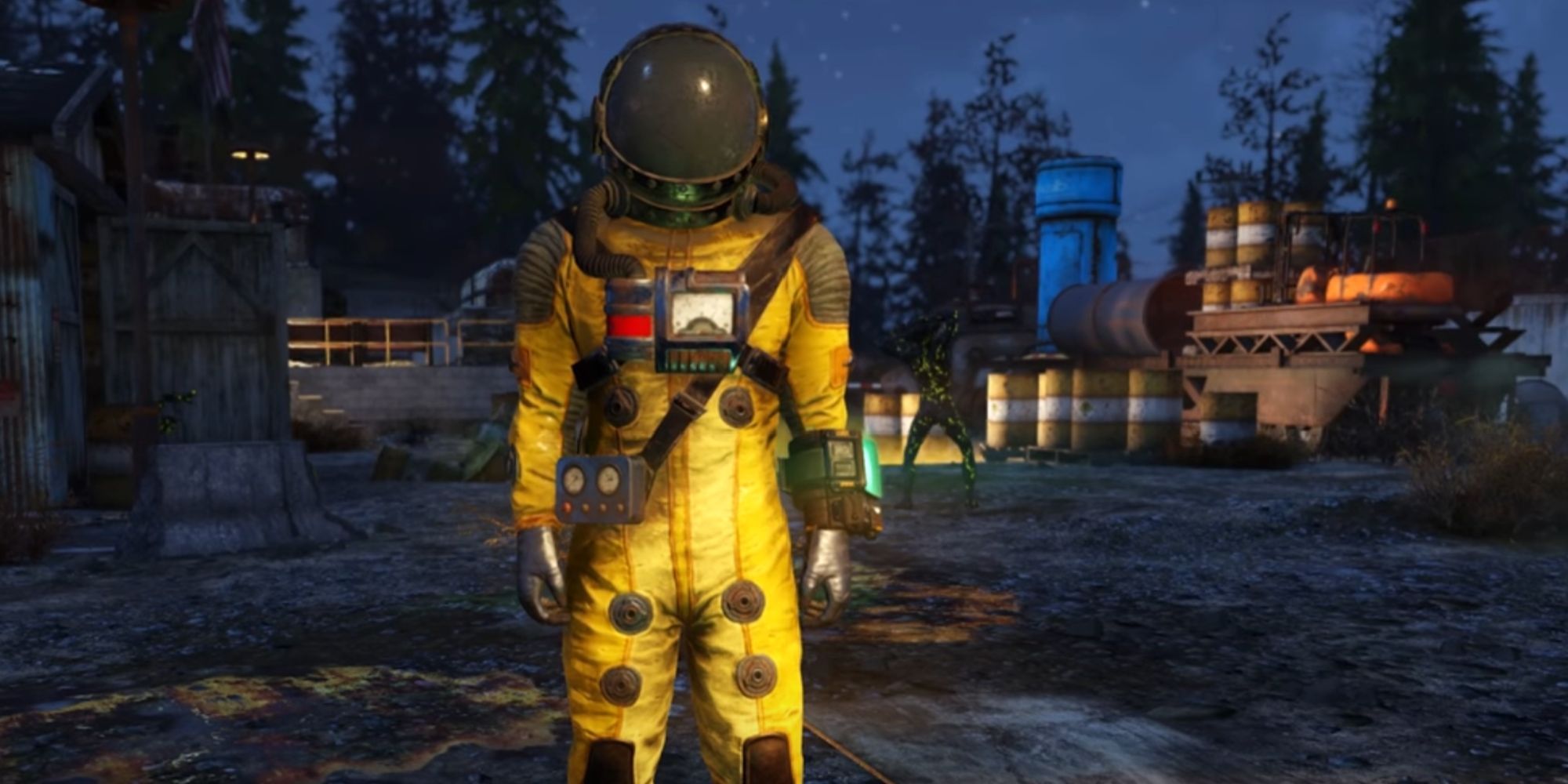 Yes, we mentioned avoiding group events. But this is the exception. Whenever a nuke launch is announced, participate in the upcoming radioactive showdown. Suit up, either in a rad suit or power armor, and wait outside of the blast range. When it drops, the area will be full of powerful creatures, many of them legendary. When defeated, they will drop weapons and armor with legendary effects.

Even better is when this happens by the lair of the Sorchbeast Queen (the southeast corner of the map). The Queen herself is pretty hard to defeat, but if you and everyone else succeed in taking her down, the rewards are some of the best in the game. You don't need to kill them yourself; as long as you deal damage, you are granted their loot. Go around, shoot everything you can, and hope that the larger teams will finish them off. Stay moving and healed up, and you should survive just fine.