You are here:
Home / Everything You Need To Know Before Starting Northgard

Everything You Need To Know Before Starting Northgard

Northgard is a fantastic real-time strategy game in which you play as Vikings battling for control of a mysterious new continent. You can enjoy a fun story mode adventure, or you can compete against your friends instead.

In Northgard, there are various Clans you can play as, all with different abilities and playstyles. The biggest challenge of this game is trying to survive the harsh winters. It can be difficult trying to learn how to utilize your resources, especially with a limited population to make use of. With that in mind, here are some beginner tips to help you get settled into Northgard.

10 Pick A Clan That Suits Your Playstyle 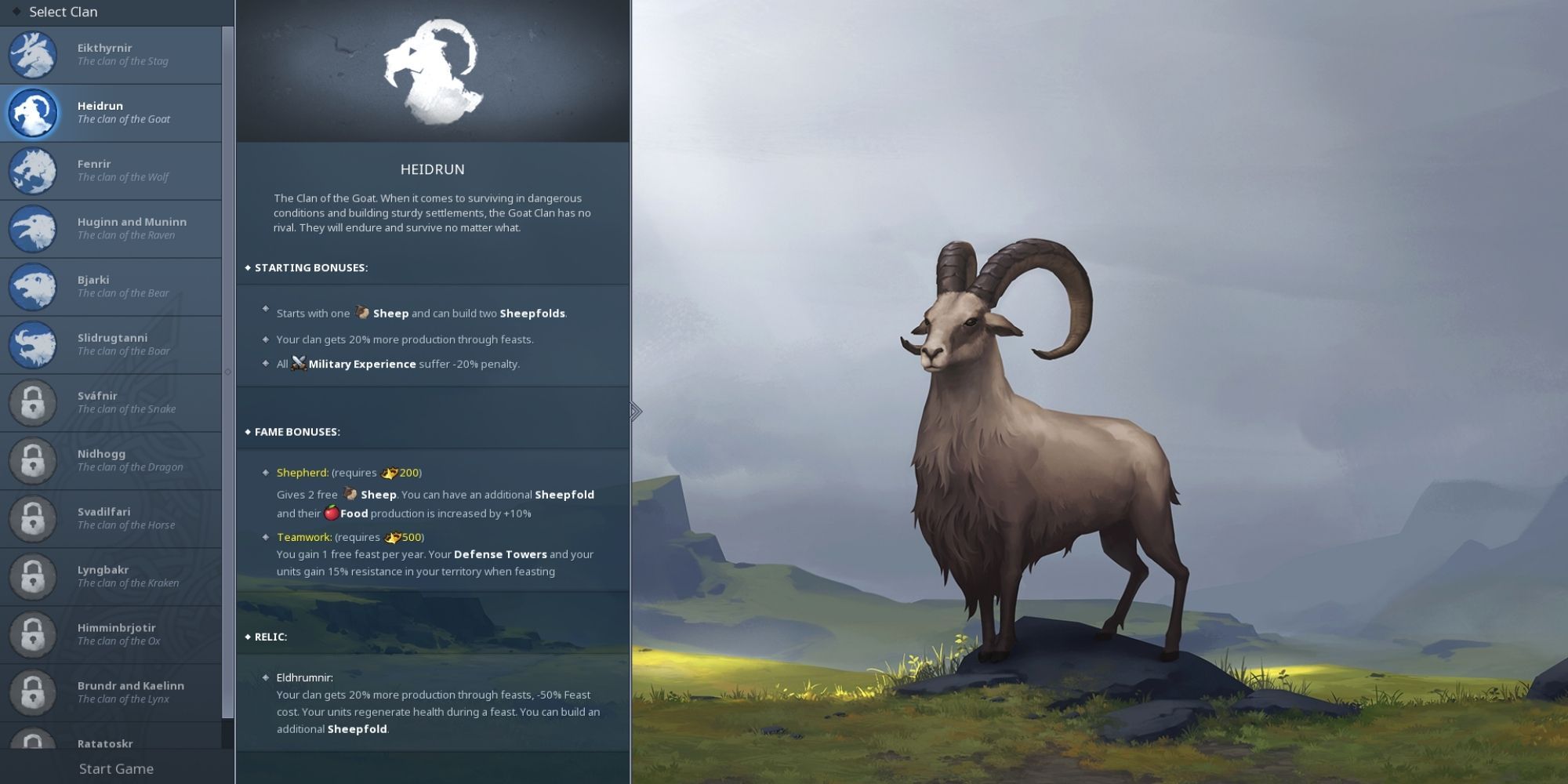 What makes Northgard a fantastic RTS game is its variety of playstyles. You don't just have to destroy your enemies to win the game. You could aim for fame, wisdom, or trade victories instead. These victory conditions can help you decide what style of play you would enjoy more.

If you want to focus on wisdom and building up lore, you'll enjoy playing as the Slidrugtanni Clan. If you prefer to set sail and attack from coasts, you should play as the Huginn and Muninn Clan. As you play more, you'll develop your style, so give all the clans a try and see what suits you best.

9 Build A Woodcutter's Lodge Right Away 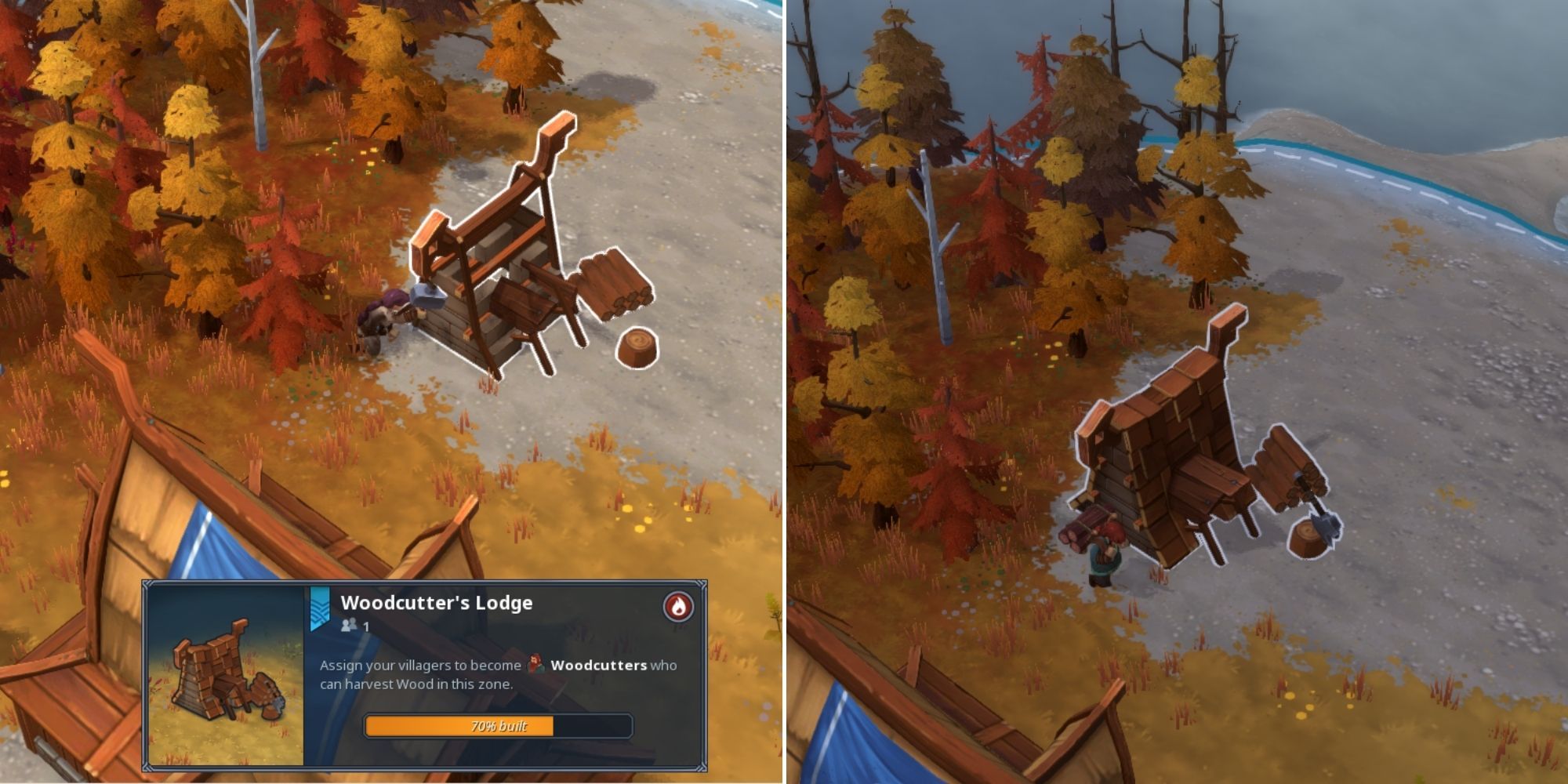 The Woodcutter's Lodge is crucial to ensure you can progress in the early game. Almost everything requires logs to be constructed, so if you neglect to build a lodge, you could find yourself stuck at a standstill. It might be tempting to wait until you discover a forest, as they are the optimal places to have a Woodcutter's Lodge, but you can always move your woodcutters later on. Your focus should be on getting an excellent supply of wood right away.

Alongside the Woodcutter's Lodge, you should also prioritize building a House and a Scout Camp. These are key to expanding your territory and your population, so don't delay constructing them.

8 Keep An Eye On Your Scout 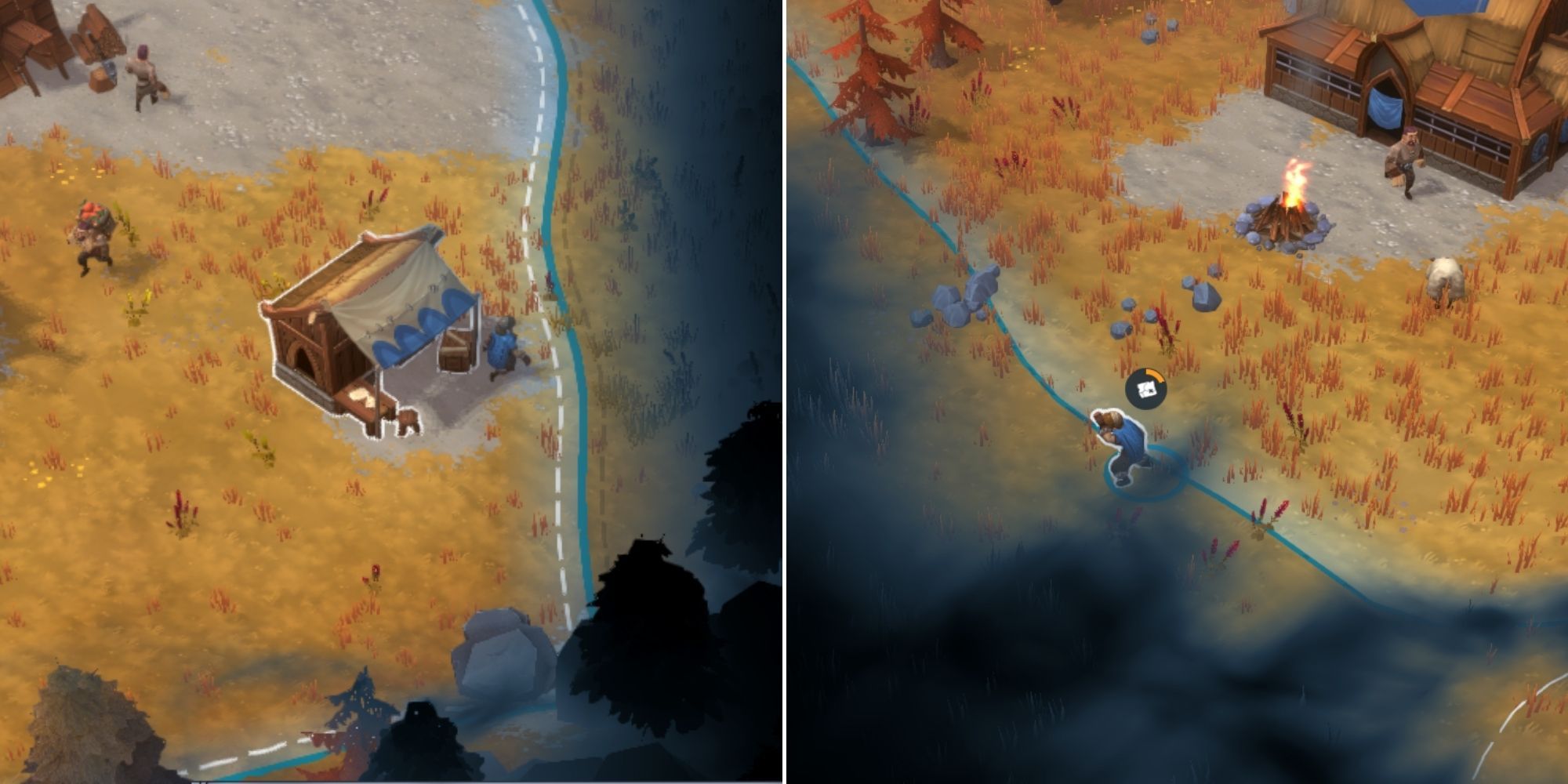 As with many other RTS games, exploration is key to figuring out your strategy. Consider having two Scouts, to begin with, to unlock the initial surrounding area quickly. After that, you can switch one Scout's role to put them to better use elsewhere.

Your Scout will automatically begin to explore new areas on a whim. But, if you specifically select what tile you want them to unlock, they will sprint to that location, speeding up the process. Make sure they search areas that are most beneficial to you. For example, suppose you have a rough idea of where your enemy might be. In that case, you might want to focus on beelining a route to their tile, rather than sporadically unlocking territory elsewhere.

7 Be Selective In How You Expand Your Territory

Every time you expand into new territory, it costs you some of your food supply. This cost will increase with each new territory. It can get expensive very quickly, so be selective in where you claim. You should also avoid buying territory right before winter when you need a surplus of food to survive.

You do not want to spread your mighty Vikings too thin, as then it will be tricky to defend your land. Expand gradually, but don't waste all of your food supply expanding into lands that are not as useful to you as others. You can examine what a piece of territory has to offer before you claim it. You'll want to prioritize lands with food sources early on and later lands with unique abilities.

6 Make Use Of Silos 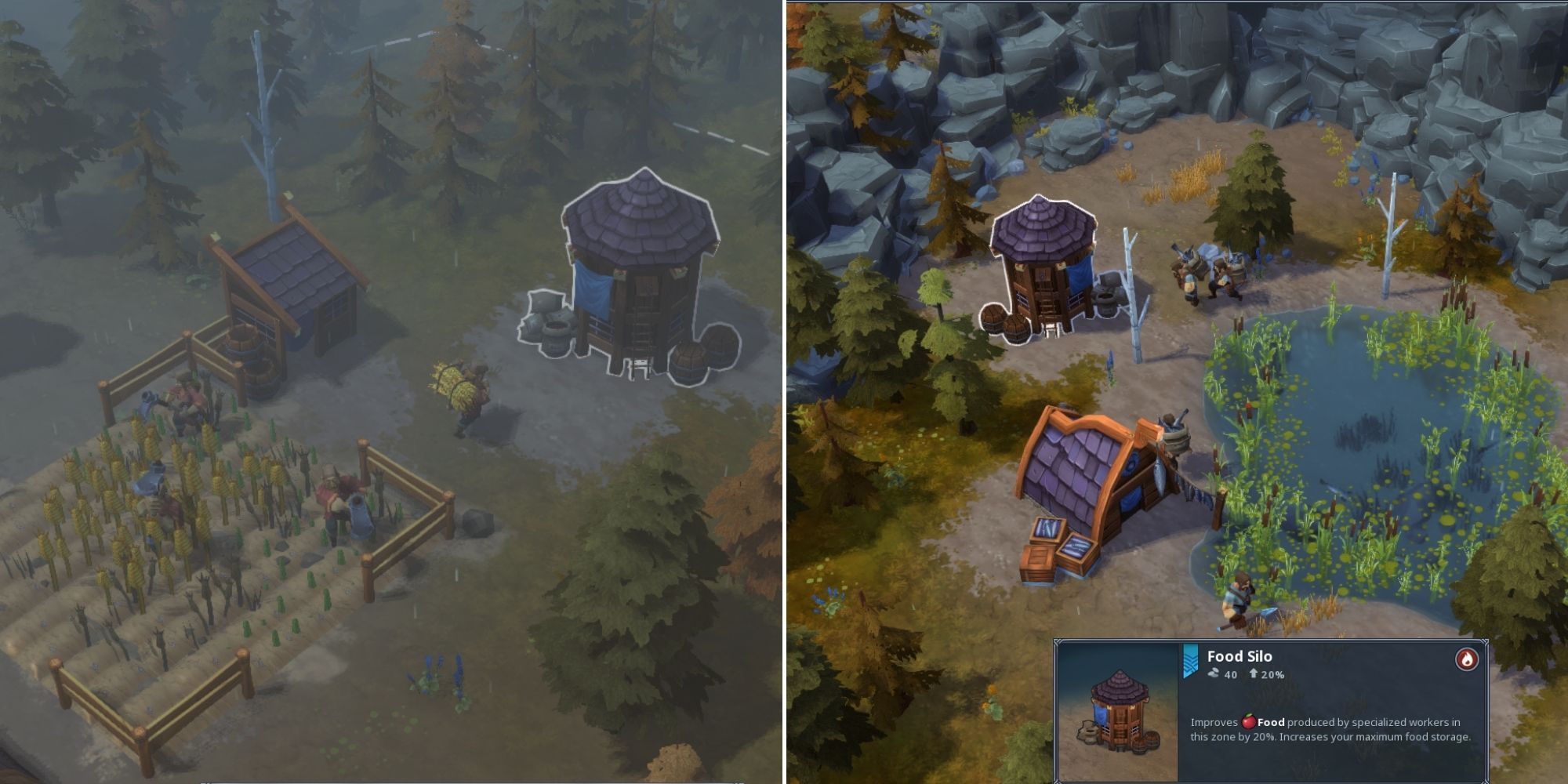 Beginners need to know that food is vital for survival in Northgard. If you run out of food, your clan will become unhappy and unproductive. Initially, you only can store 500 stock of food. This is fine to begin with, but as the winters get harsher, this will soon not be enough.

Silos are vital. With the limited space you have in each of your territories, make sure that you have room for a silo if possible. Place them next to Farms and Fisherman's Huts to speed up the production process and increase your maximum food supply by 300. Food Silos should be a top priority, especially if you can upgrade them, as they also protect your food from rats. 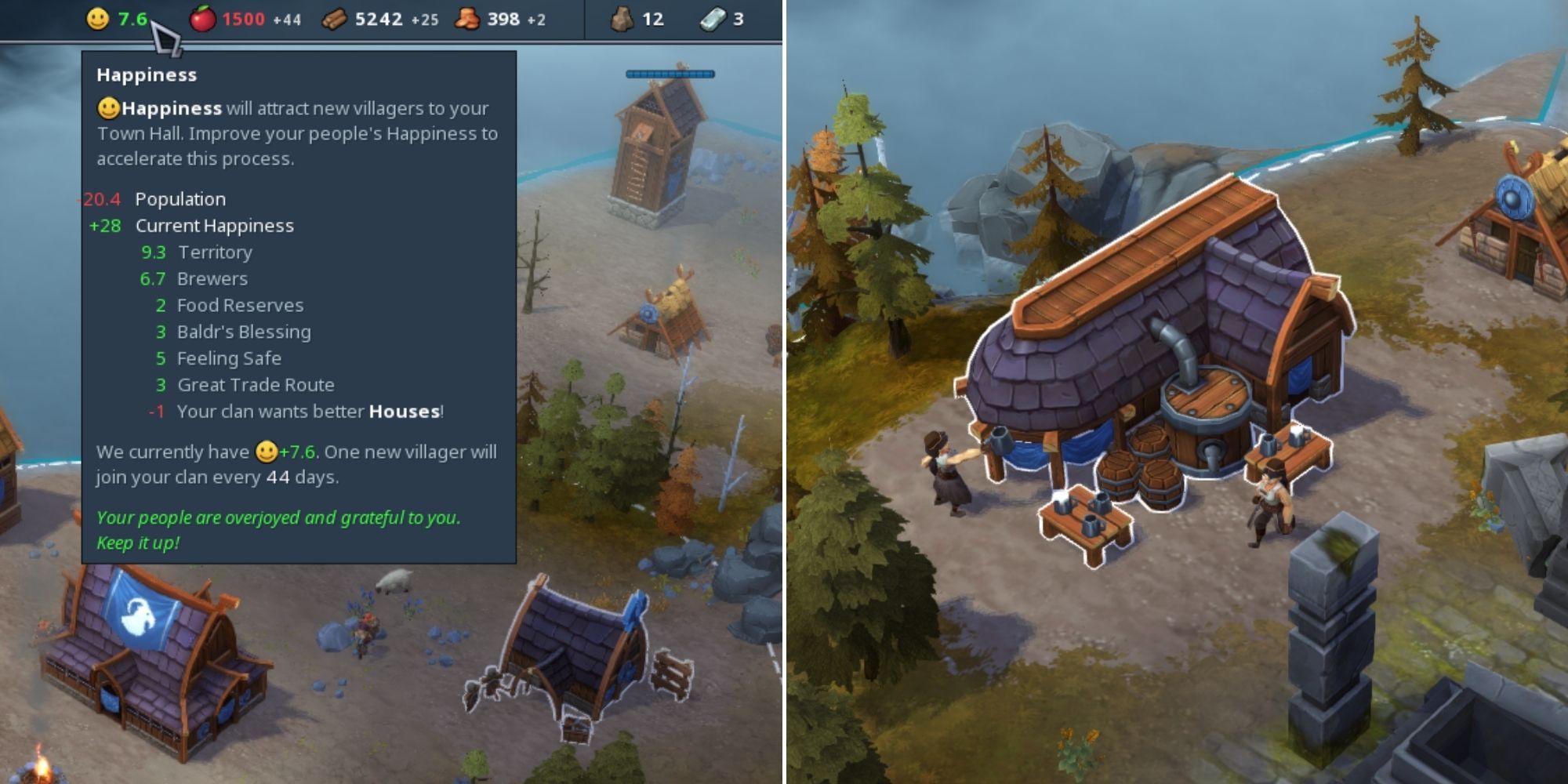 The morale of your clan is a vital game mechanic in Northgard. Unlike other RTS games in which you can gain villagers at any time, Northgard needs happiness to allow for a gradual increase in population. If your clan becomes unhappy, no more villagers will spawn. Be wary of the happiness tracker, as the more you expand and grow, the more difficult it becomes to maintain a happy Clan.

The best way to manage happiness is to invest in a Brewery. Each Brewer gives you two happiness. Feasts are also suitable as a last resort, boosting happiness and all other resources. But use these sparingly. They will cost more with each usage, so hold off on feasts, especially in the first year. It is also pointless to do this during winter, as winter will negate the bonuses.

4 Have Some Villagers Available For Repairs 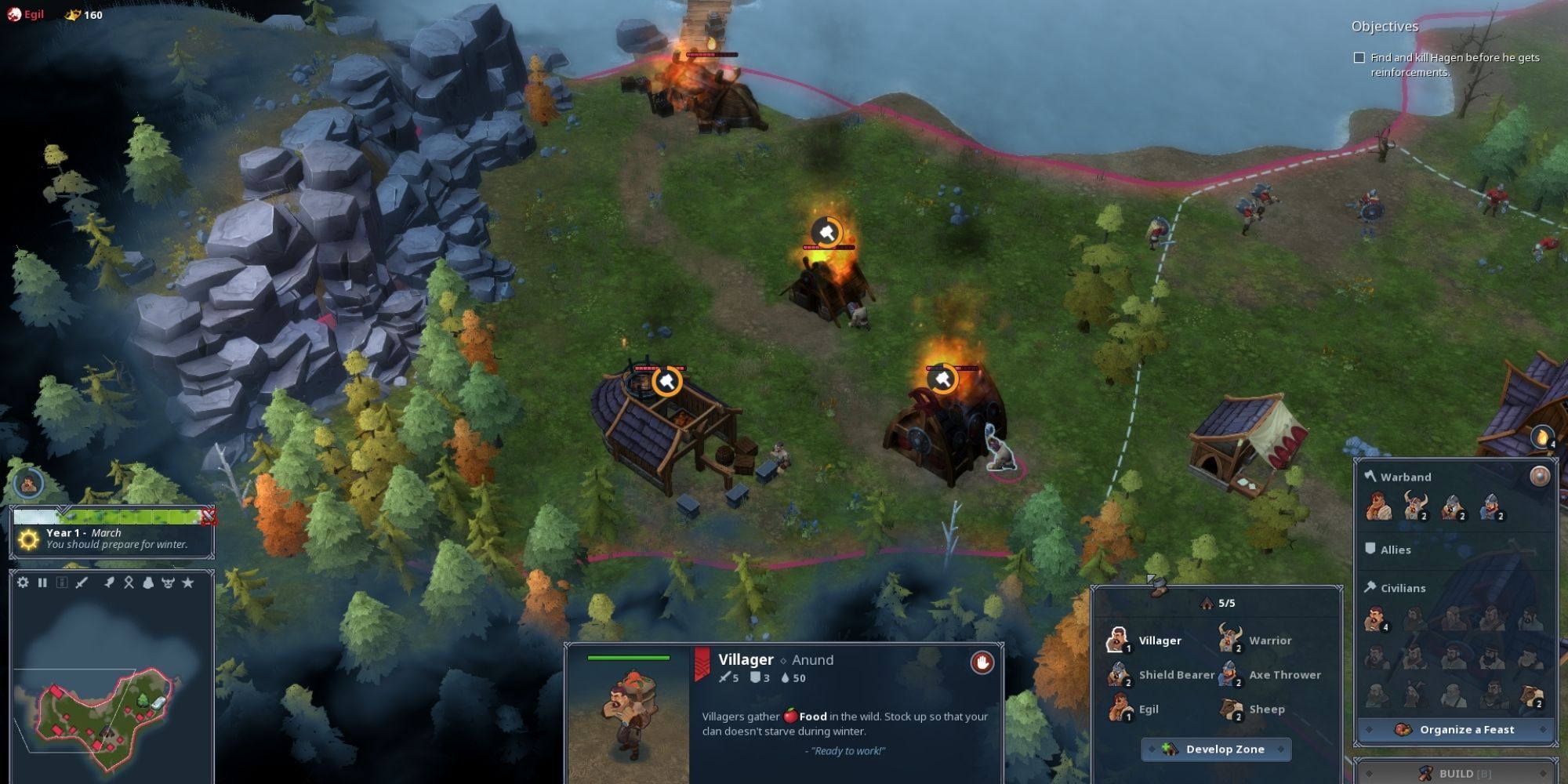 It can be tempting to turn all of your villagers into specialized roles, but make sure you have one or two villagers around at all times. They are helpful for construction and repairs after attacks. If you are out of villagers during a crisis, you can still revert other roles to a villager by sending them to one of your houses.

When you take over a rival's territory, their burnings will begin to burn down slowly. If you have a villager nearby, you can quickly send them along to repair these as well so you can make use of your enemy's buildings without having to waste your supplies rebuilding. 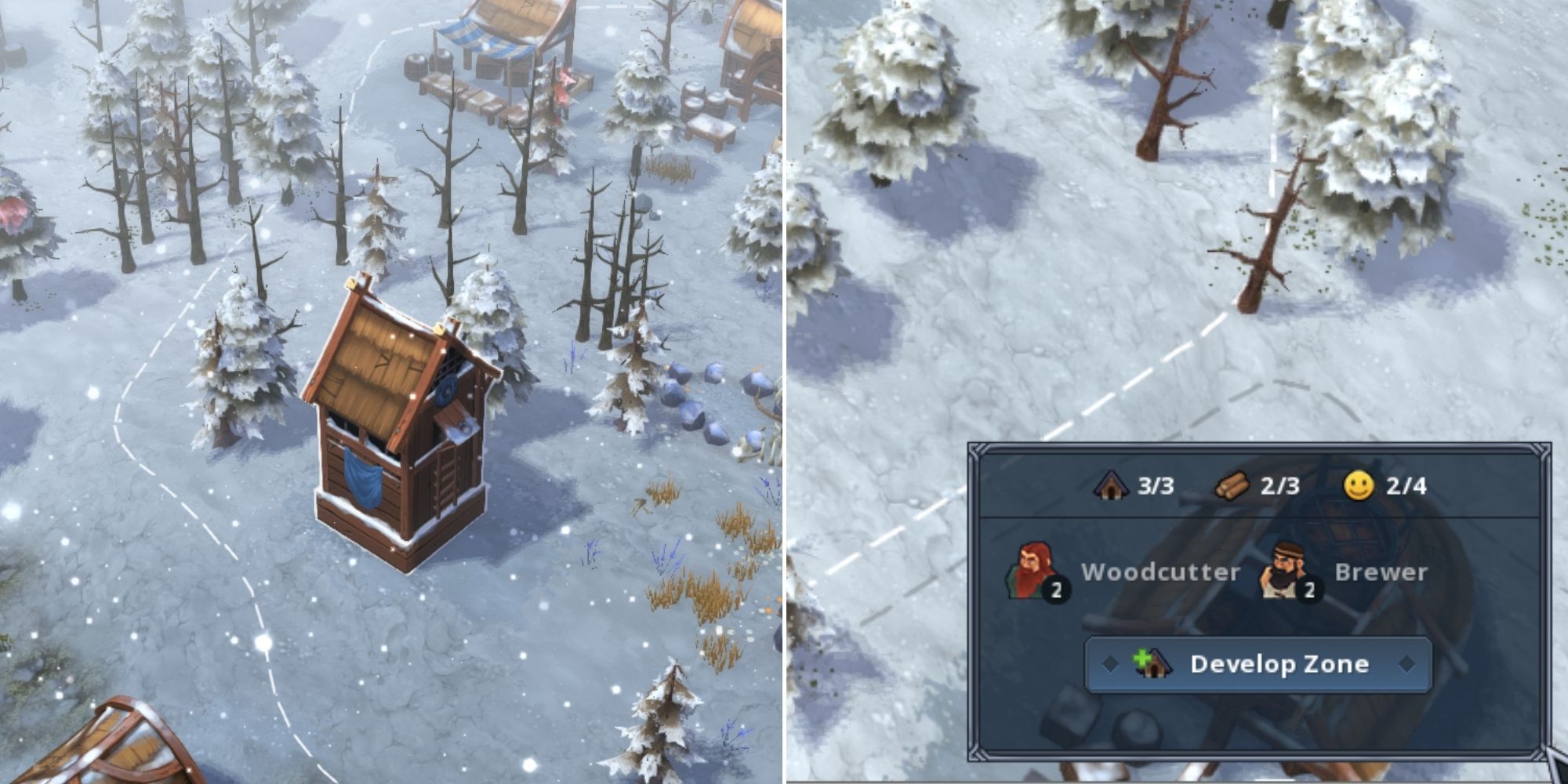 You often only have three spaces for buildings in a territory initially. But, your Defense towers will not count towards this building limit, so make sure to build them whenever you can. You're likely not to have a massive army, and they will often be raiding other territories rather than staying at home. This can make defense difficult from random events and attacks. Defense Towers are a great solution to this, keeping your domains safe at all times.

You should place these towers in the center of a territory. Their range will reach all parts of the zone no matter where they are placed. With a Tower in the center, it will take longer for enemies to reach it and attempt to take it down.

2 Be Tactical With Your Battles 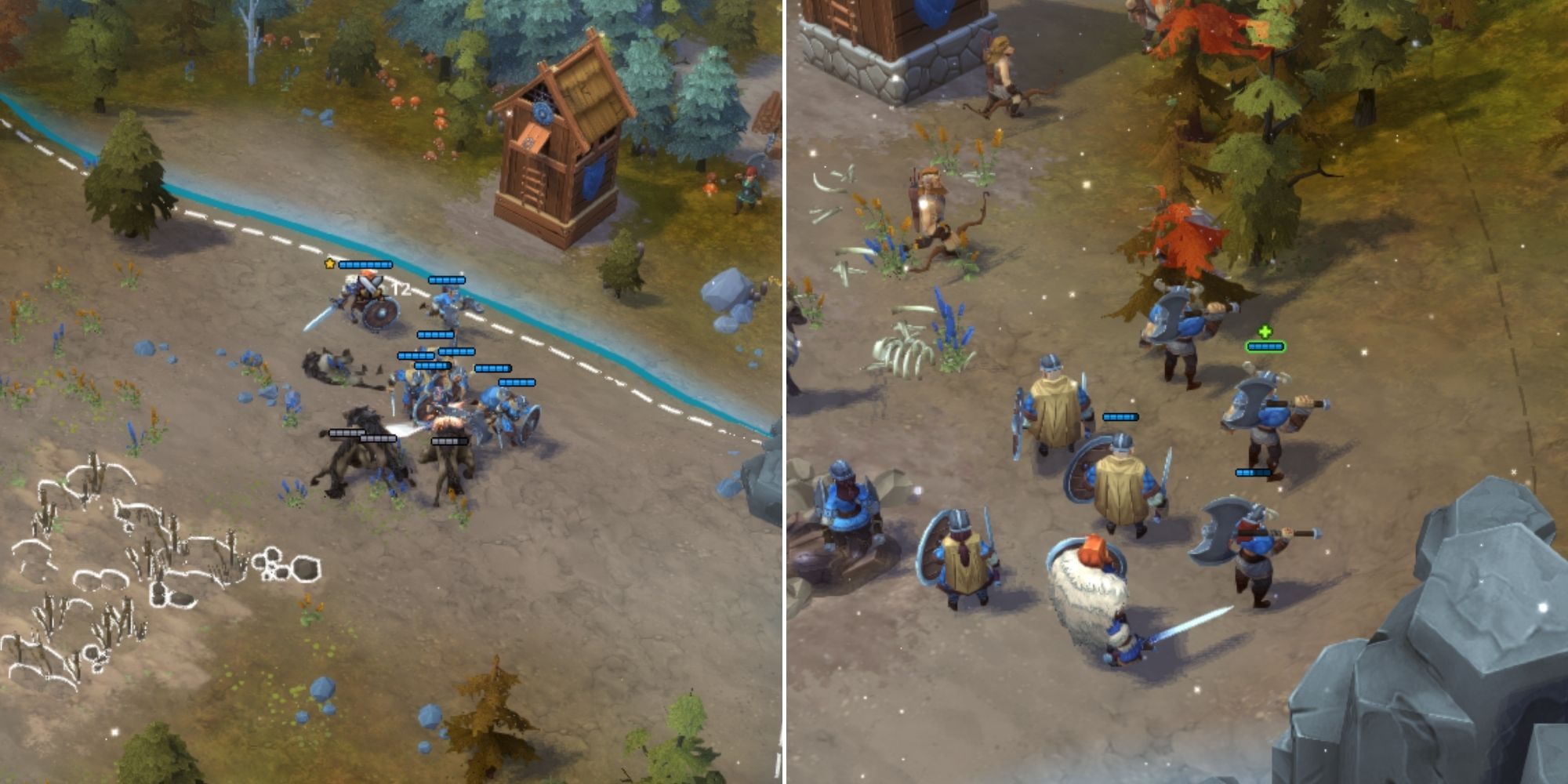 Northgard is focused on Norse Mythology, which means you can often encounter quite deadly, fantastical monsters when exploring your surroundings. Fighting in Northgard is relatively simple, as you just need to select your army and select the zone you want to attack. But you shouldn't just let this happen unsupervised.

Be tactical with your battles by micromanaging your warriors. If one warrior has taken the brunt of the attacks, quickly select that individual and send them back to your territory to heal up while the others carry on. Two healers back at the base should be more than enough early on. You only have a limited supply of warriors, so it is crucial to play it safe and avoid letting them die as much as possible.

1 Upgrade Whenever You Can 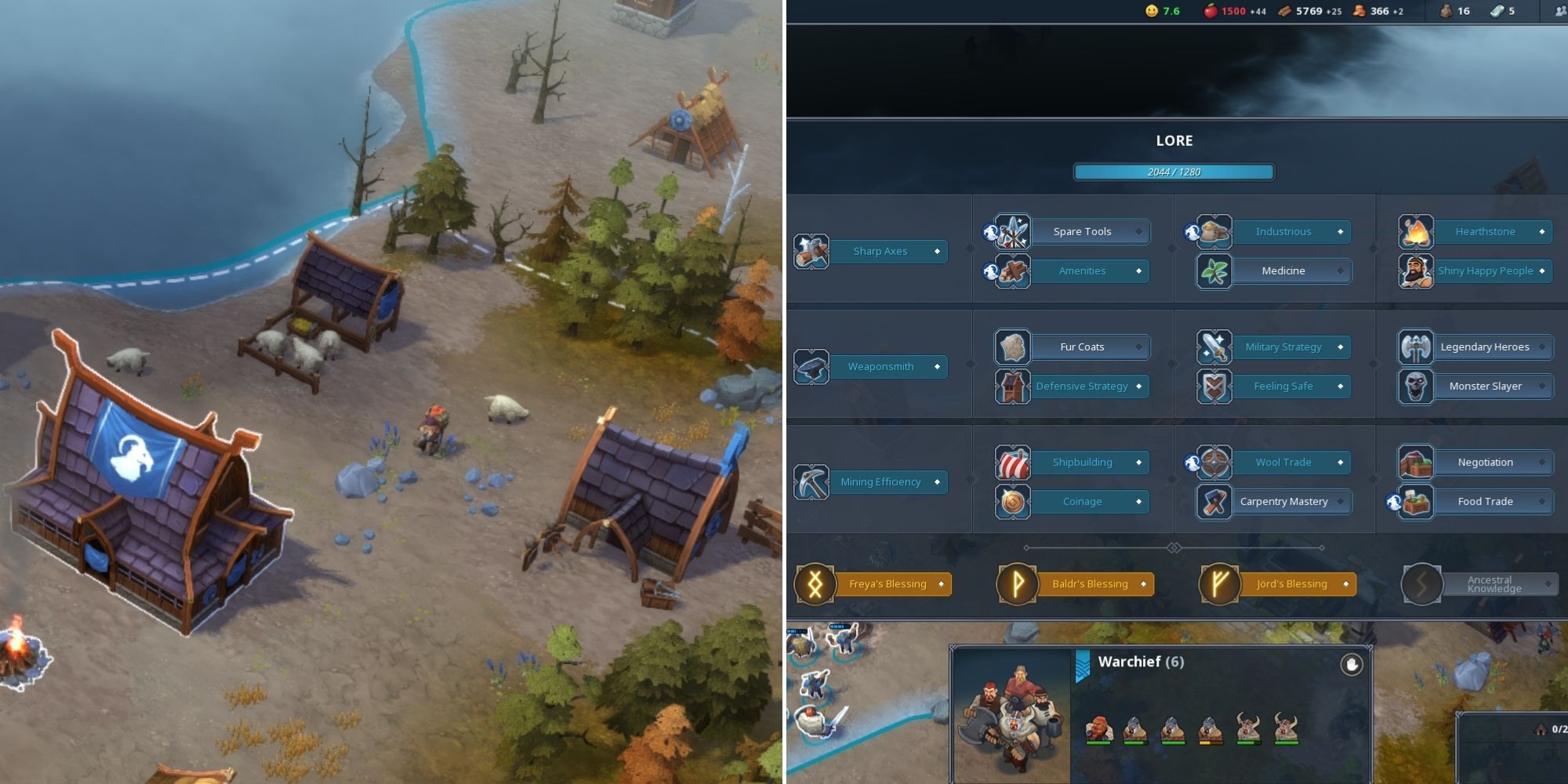 Since you want to avoid expanding too quickly in Northgard, a good alternative is to make the most of your current buildings. Focus on upgrading your resource buildings first, such as the Woodcutter's Lodge and your Hunter's Lodge. This will allow you to assign more villagers to them and make them more productive.

In such a medieval setting, you won't ever get complicated technological upgrades for your clan, but that doesn't mean that research and development aren't still vital. Make sure you have some Loremasters when you get the chance to gain new abilities focused on your playstyle.