You are here:
Home / Everything We Learned In Magic: The Gathering’s Commander Legends: Battle For Baldur’s Gate Debut

Everything We Learned In Magic: The Gathering’s Commander Legends: Battle For Baldur’s Gate Debut

Ahead of its June 16 launch, Wizards of the Coast has kicked off Magic: The Gathering's Commander Legends: Battle for Baldur's Gate preview season with a full debut of the major mechanics we'll be seeing in the set and a few famous faces we could find in booster packs. 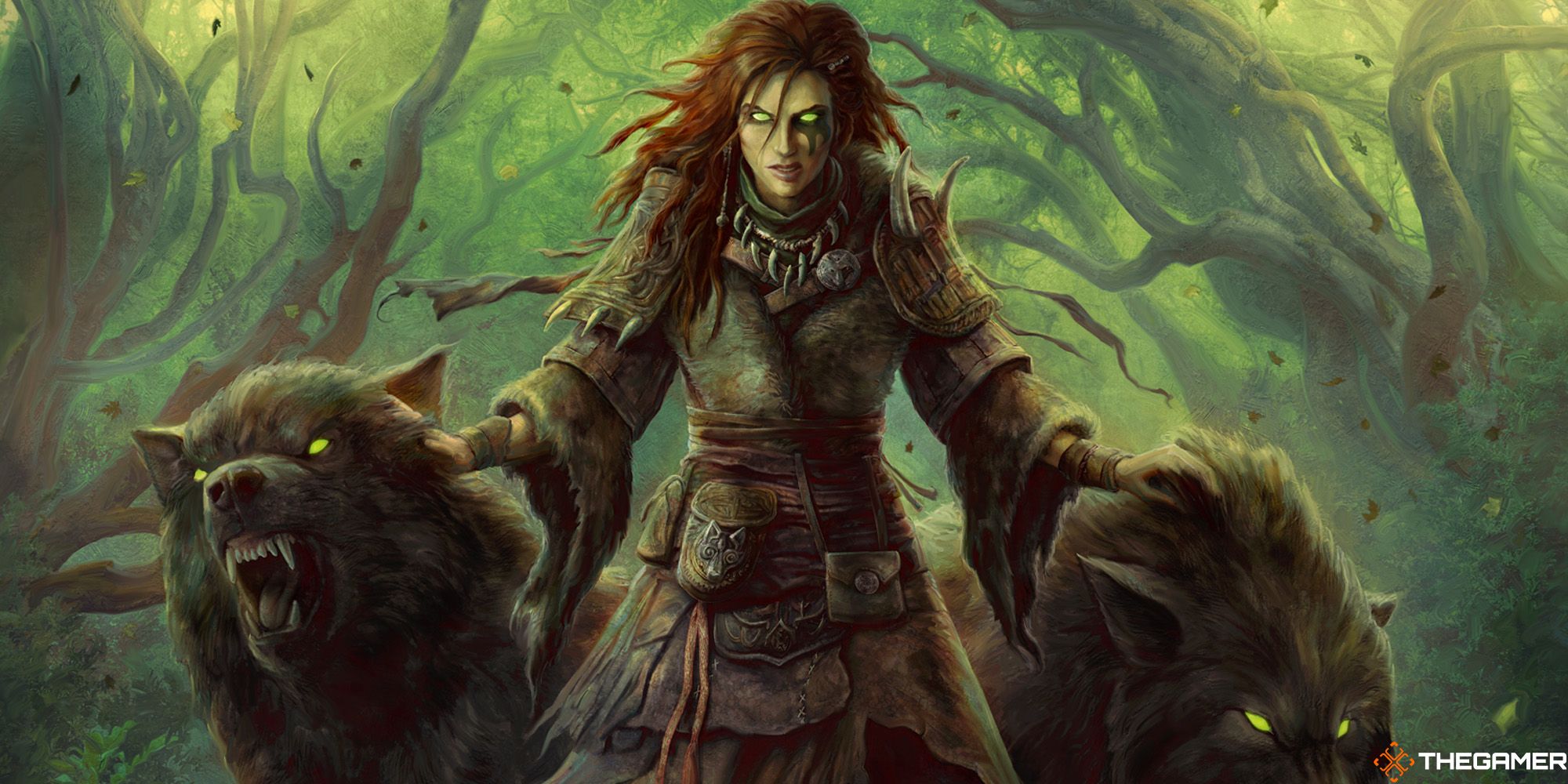 As it's a set built for Commander, which can use mechanics from right across the game's history, Battle for Baldur's Gate will use a large number of older mechanics to varying extents. However, a few were singled out, including the two new mechanics. 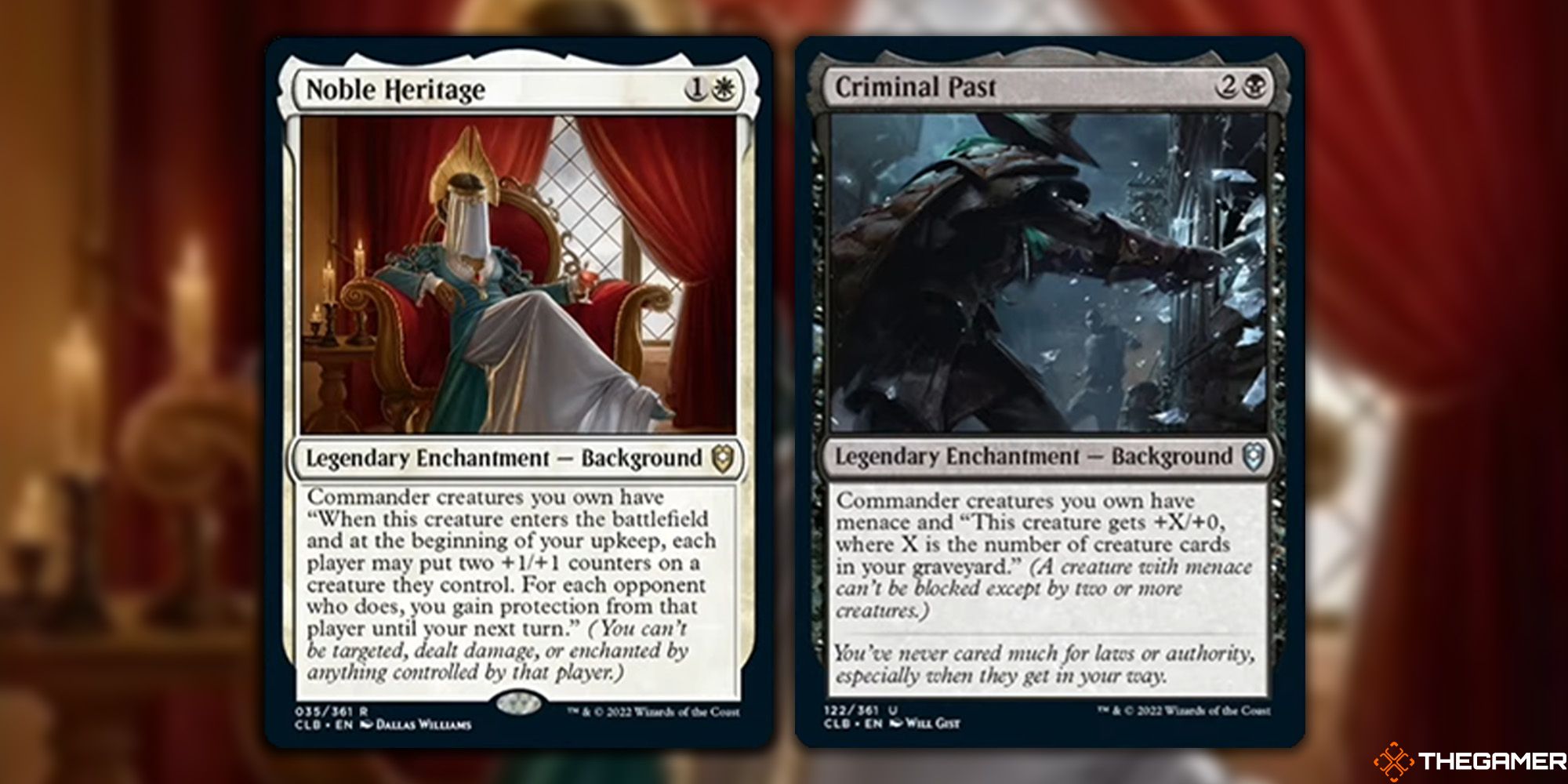 The first new mechanic are Backgrounds. A new type of enchantment, Backgrounds serve as Battle for Baldur's Gate's take on partners. If your Commander has "Choose a Background" in its rules text, you can run it and a Background enchantment as co-commanders. Like partner in the original Commander Legends, the goal of Backgrounds is to provide more flexibility when drafting your deck, as your deck's colour identity will be based on both your creature and your Background.

Most Backgrounds provide buffs to your commander, such as Criminal Past giving it menace and +X/+0, where X is the number of creature cards in your graveyard. However, there is also one Background enchantment creature, which is the colourless Faceless One. Faceless One can serve as both a Background and a creature and is this set's version of the Prismatic Piper in that you declare which colour it is at the start of the game to ensure you always have at least one Commander available to you. 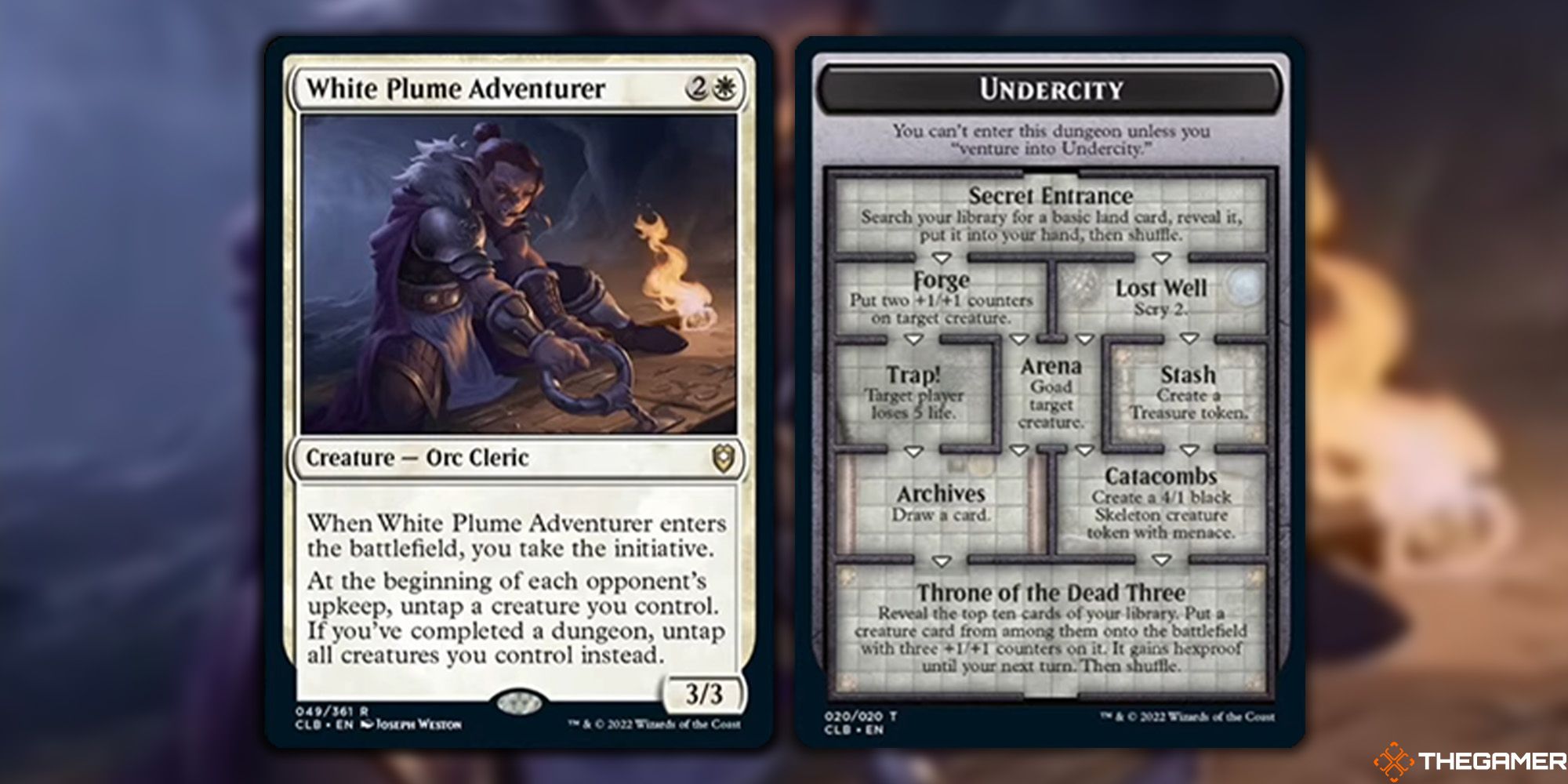 The second new mechanic is also taken from Dungeons & Dragons: initiative. Initiative is inspired by the popular monarch mechanic, but combines it with the venturing to the dungeonv introduced in Adventures in the Forgotten Realms. Once a card gives a player the initiative (such as White Plume Adventurer), it remains in play for the rest of the game. However, other players can steal initiative by dealing combat damage, the same way as monarch.

When you first gain the initiative, and for each of your upkeeps for as long as you have it, you venture into a special dungeon known as the Undercity. The Undercity can't be ventured into in any other way. Each step includes useful effects like scrying, making treasure tokens, goading creatures, and, eventually, revealing the top ten cards of your library and putting a creature from it onto the battlefield. Think of it as monarch with more varied effects than just drawing a card. 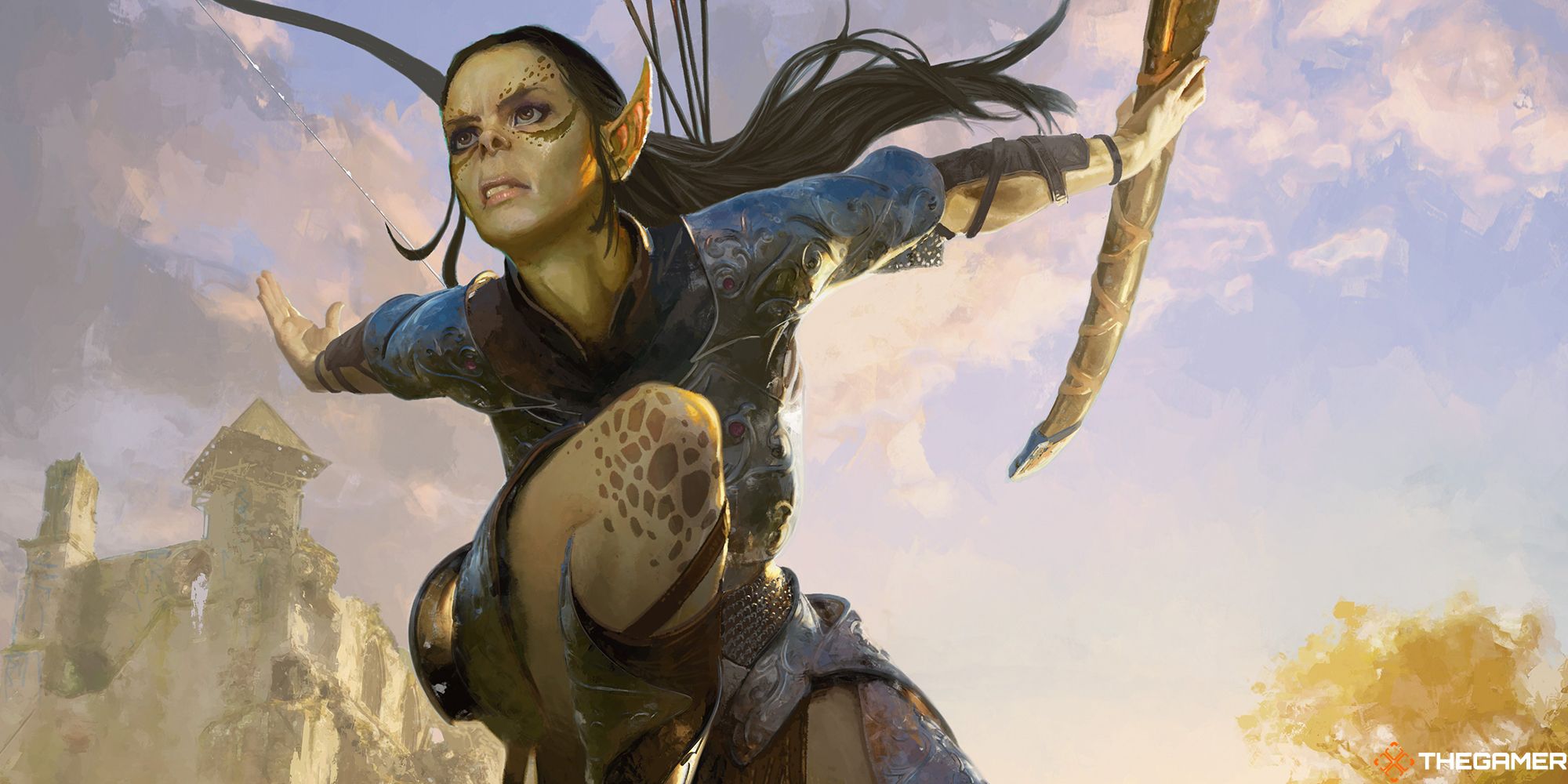 As mentioned, we can expect to see lots of older mechanics making one-off appearances throughout the set. A few play a bigger role, though. 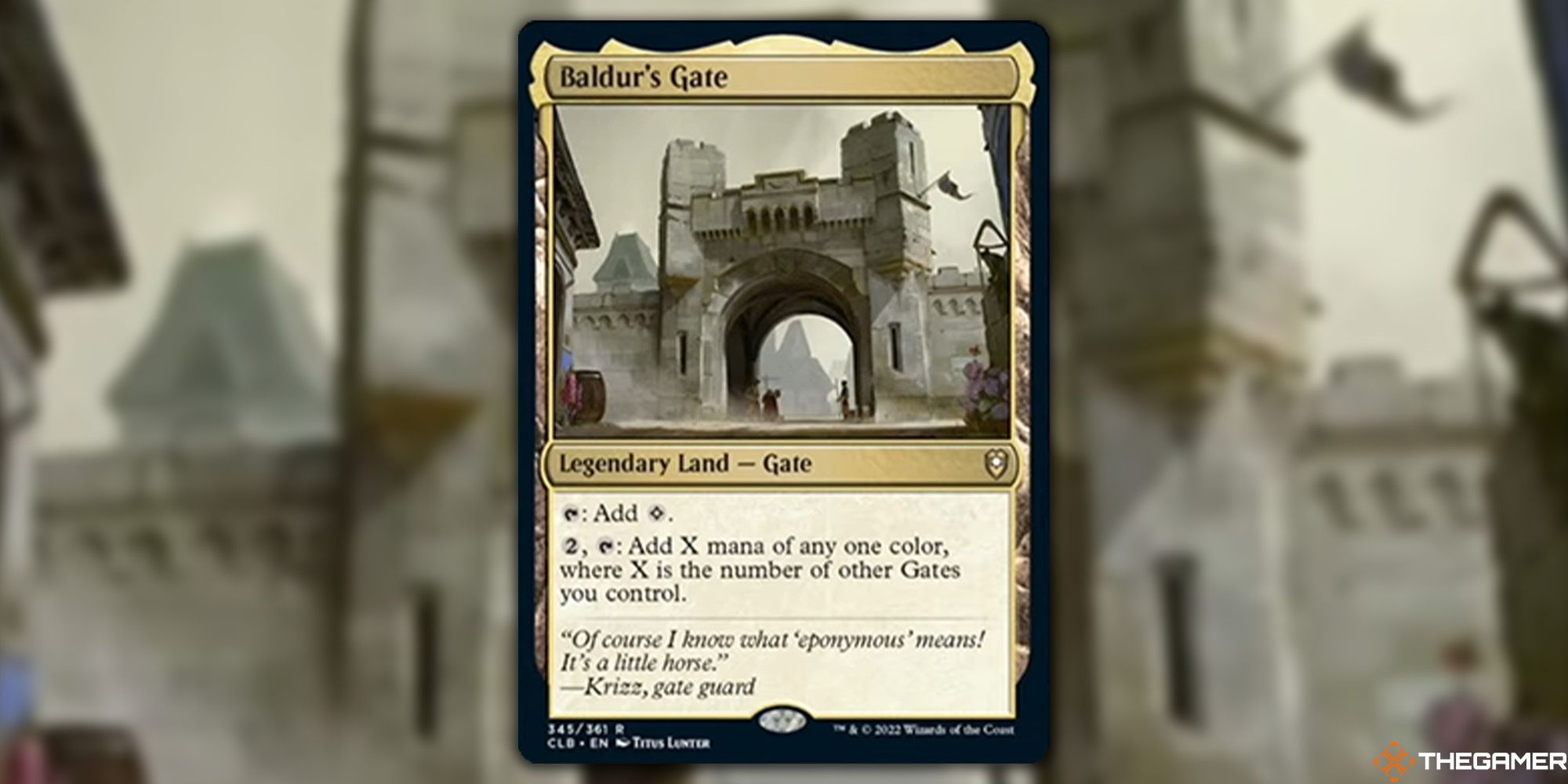 The first announced were the Gates. Gates play a larger role in other formats like Pioneer, but are still popular in Commander for their colour-fixing and the odd alternate win condition, like Maze's End. Baldur's Gate is set to make Maze decks a lot more efficient by introducing nine new Gates, including the titular Baldur's Gate itself. Each of the Gates will be based on one of the nine regions of the city of Baldur's Gate, and will be spread across different rarities. There will also be a handful of cards within the sat that use Gates in different ways, though none have been revealed as of yet. 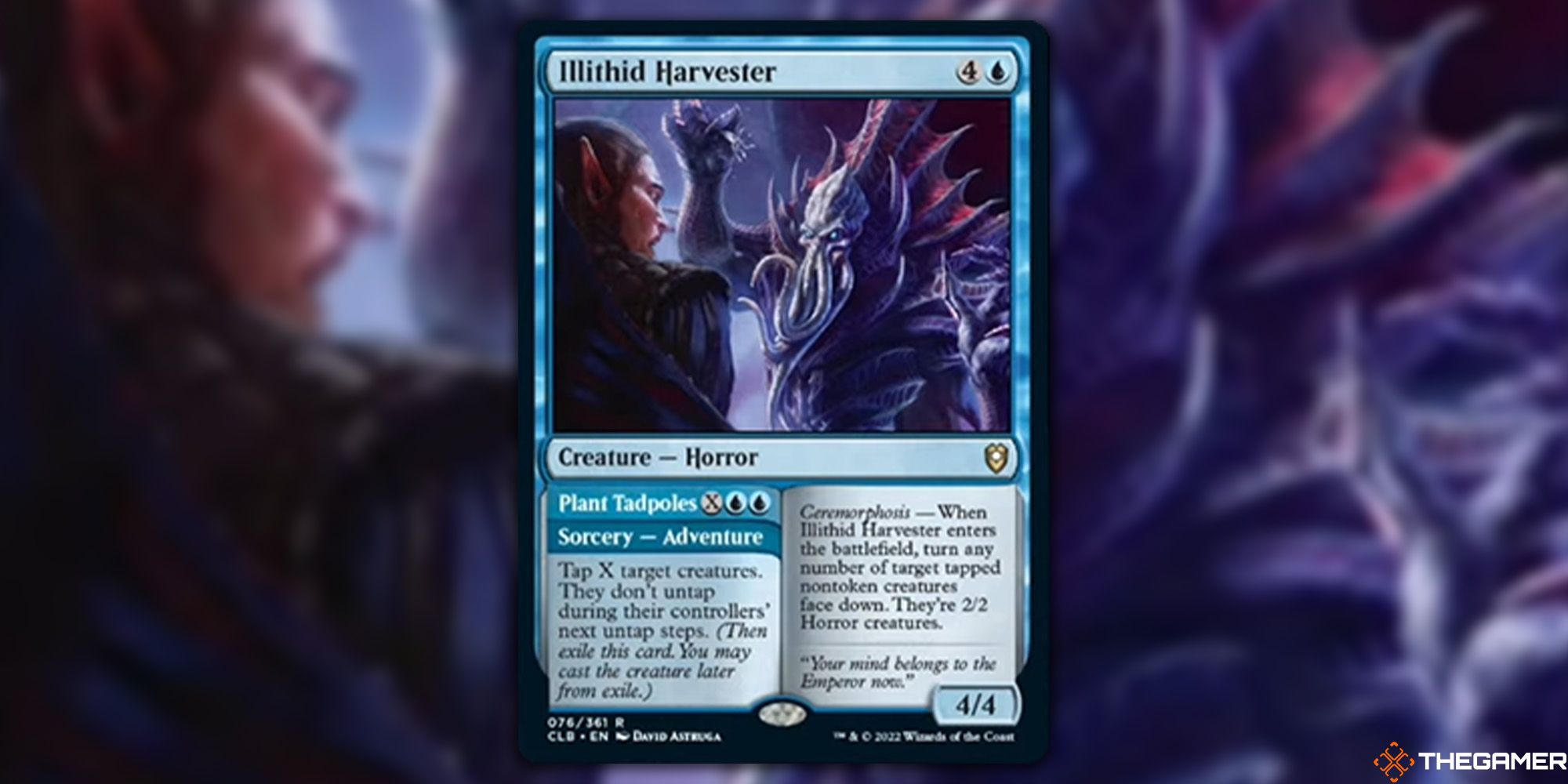 Adventure is also coming back for the first time since Throne of Eldraine. Adventures split a card in two: you can either play the creature half for its ordinary cost, or cast the instant or sorcery side for an alternative casting cost, and then exile it instead. You can then cast the creature side for extra bang for your buck from exile. Though adventures haven't been a massive part of Commander, they were a powerhouse in Eldraine's time in Standard. It's nice to see the mechanic built upon through cards like Illithid Harvester, which can tap creatures with its adventure before turning them all into 2/2 Horrors with its enter-the-battlefield effect. 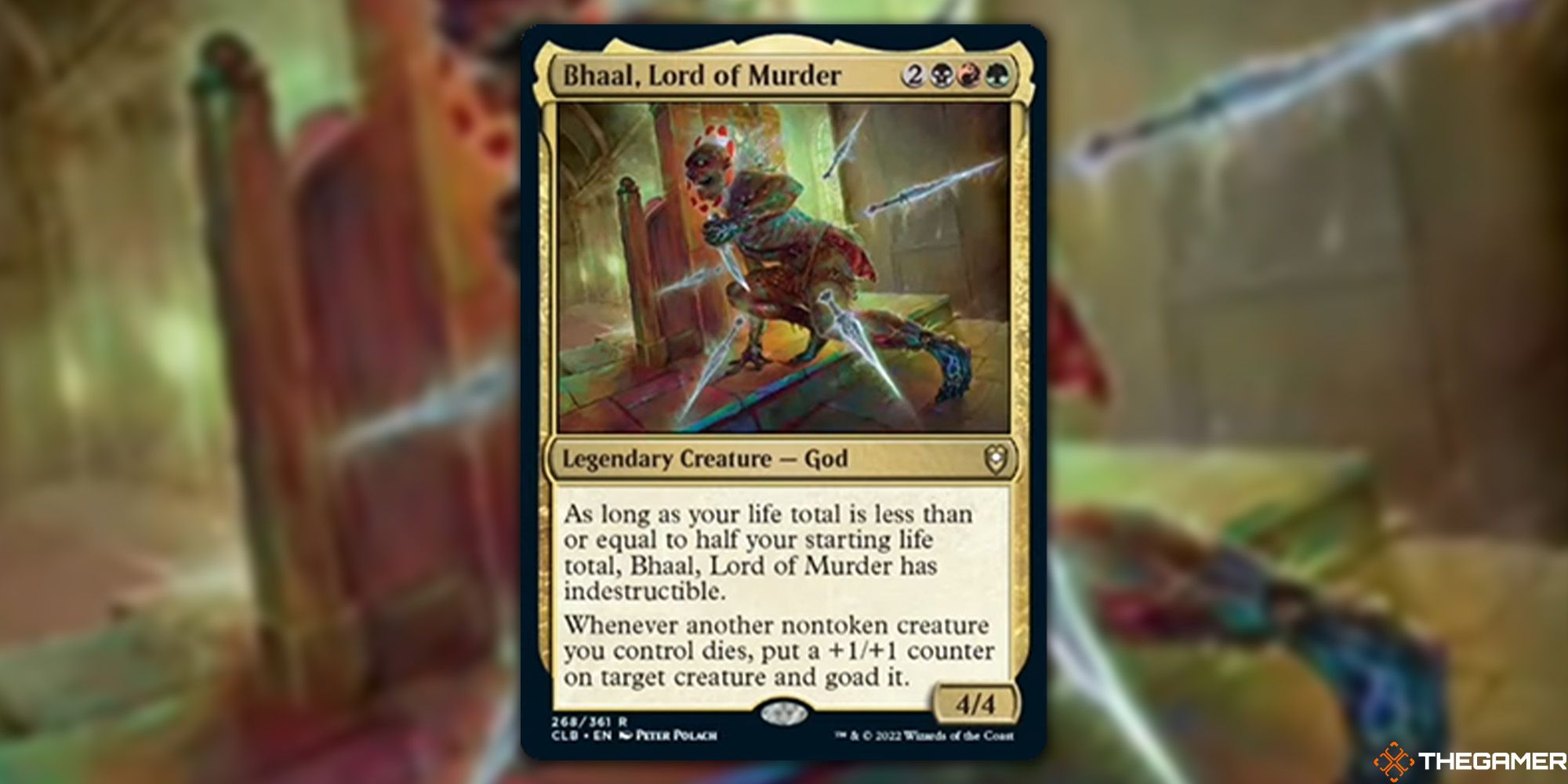 Though not primary focuses of the set, three other mechanics were confirmed. The first Commander Evergreen keyword goad is making an appearance on cards like Bhaal, Lord of Murder to ensure that games don't get jammed up by nobody attacking. 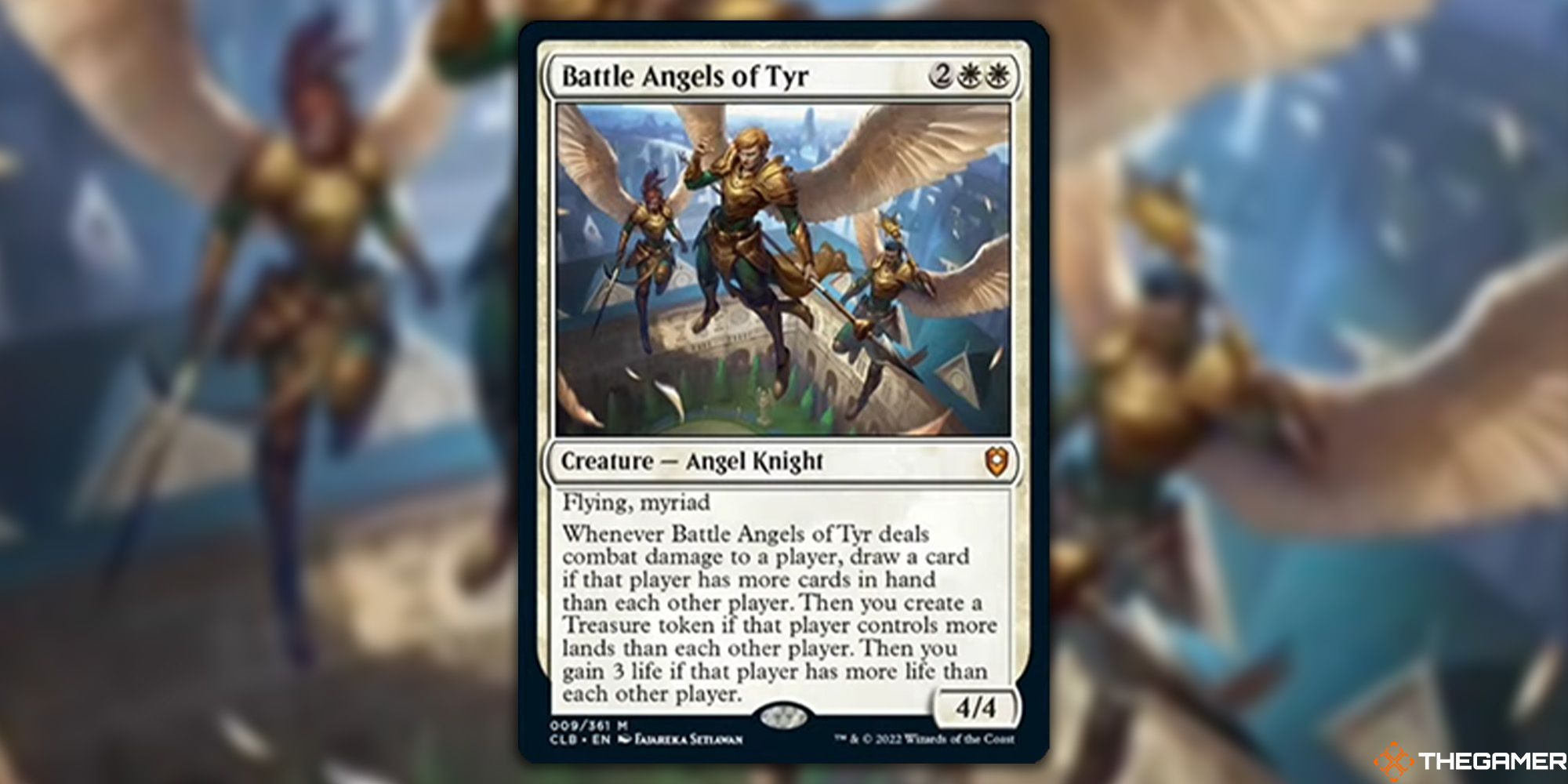 Another game unsticking mechanic coming back is myriad. Myriad creates a token copy of the creature with the keyword for each opponent it is attacking, allowing you to hit the entire table at once. So far, we’ve only seen it on one card, Battle Angels of Tyr, but expect to see more of it – particularly in white, which has a theme of creating creature tokens in this set. 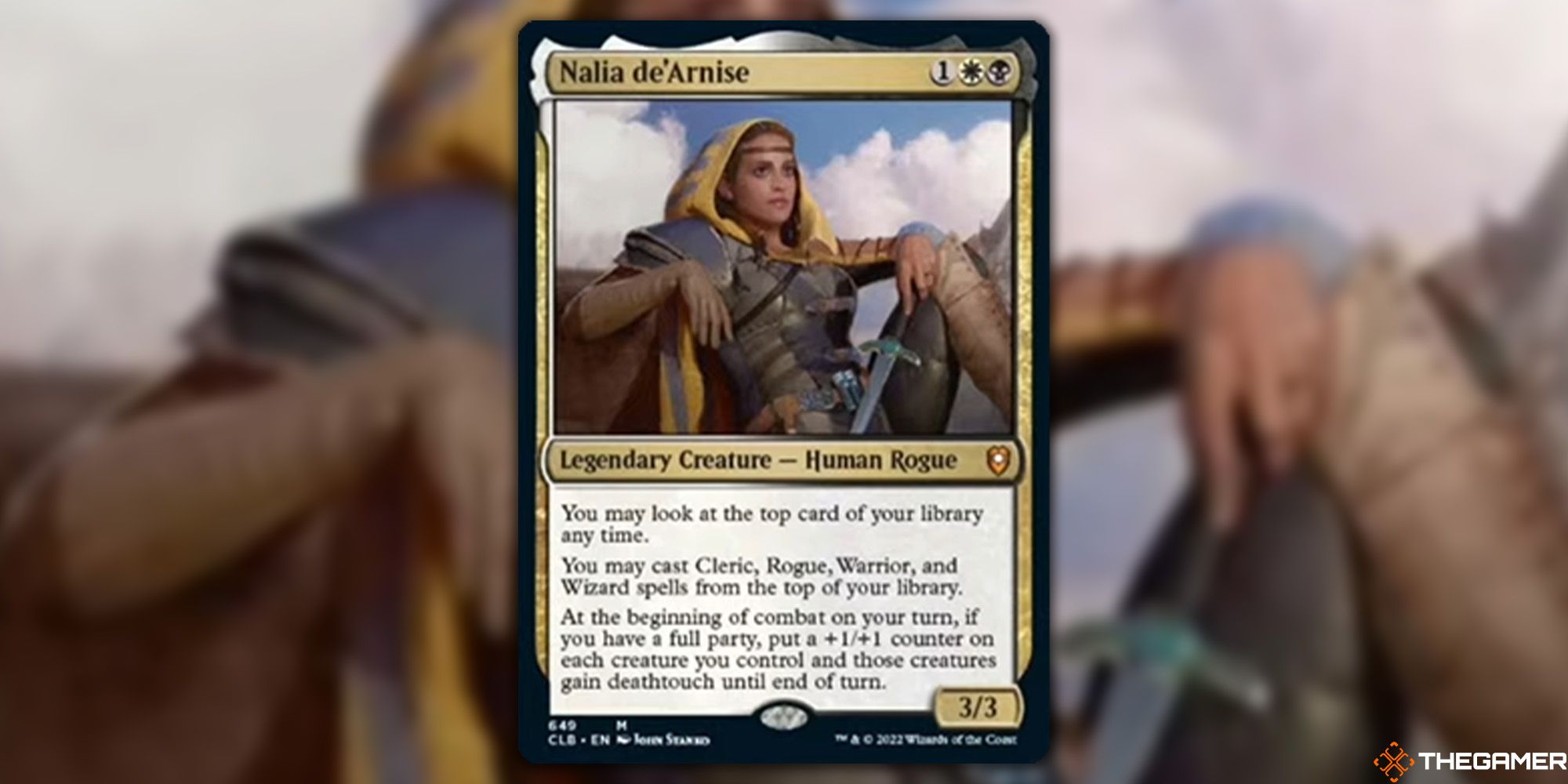 Finally, we have party. A curious absence from Adventures in the Forgotten Realms, party has effects that scale up in potency depending on how many of the four party classes – Rogue, Wizard, Warrior, and Cleric. – you have under your control. It appears as though this may only be a theme in one of the Commander precon decks, the Orzhov (white/black) Nalia de’Arnise, but there is a chance we’ll see more from it in the wider set as well. 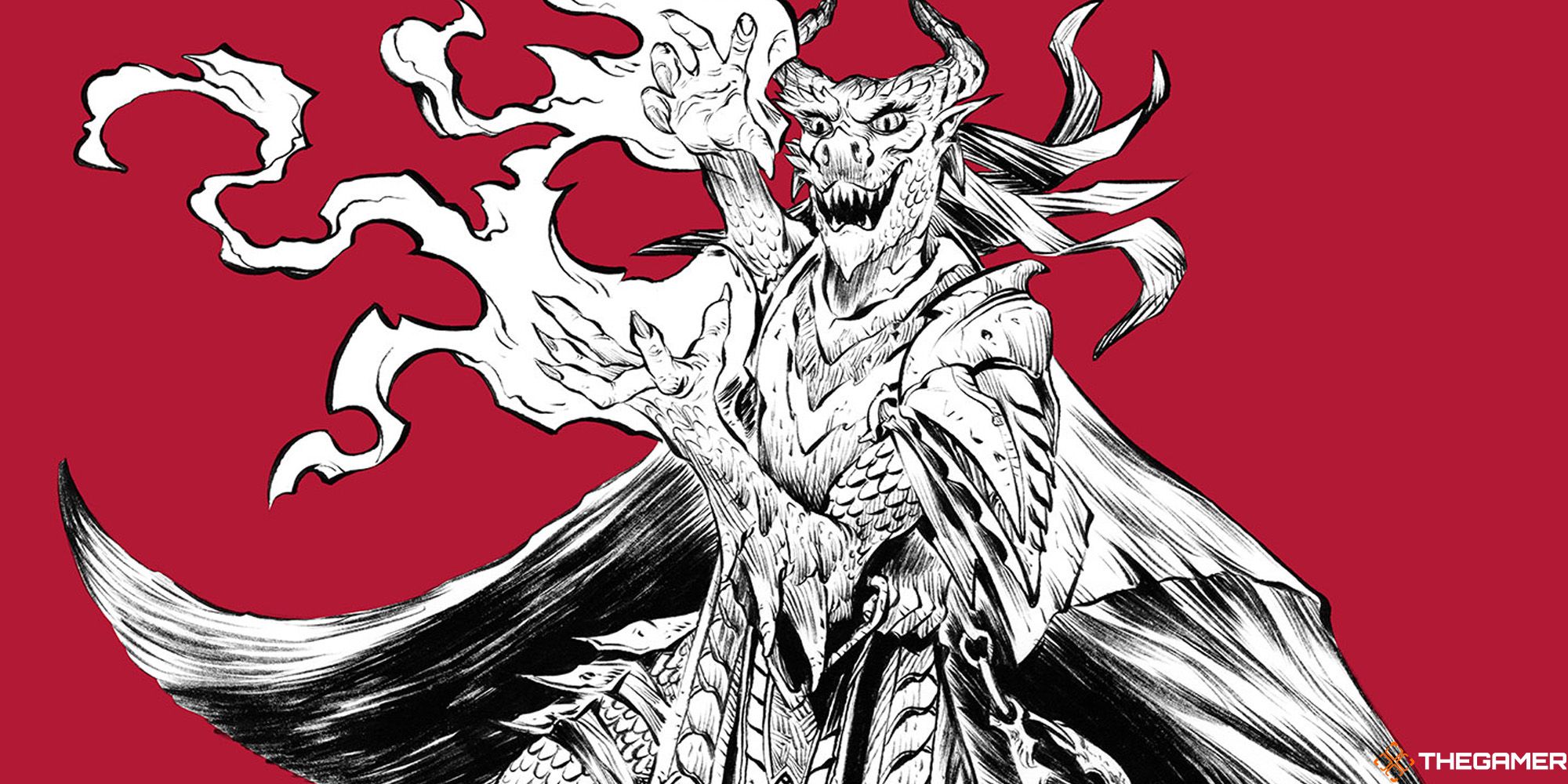 It wouldn’t be a Commander Legends set without lots of new legendary creatures, and Battle for Baldur’s Gate is pulling from right across the series’ history for its faces. While new legendaries will be announced all throughout the preview season, we got a good chunk of them in today’s debut. 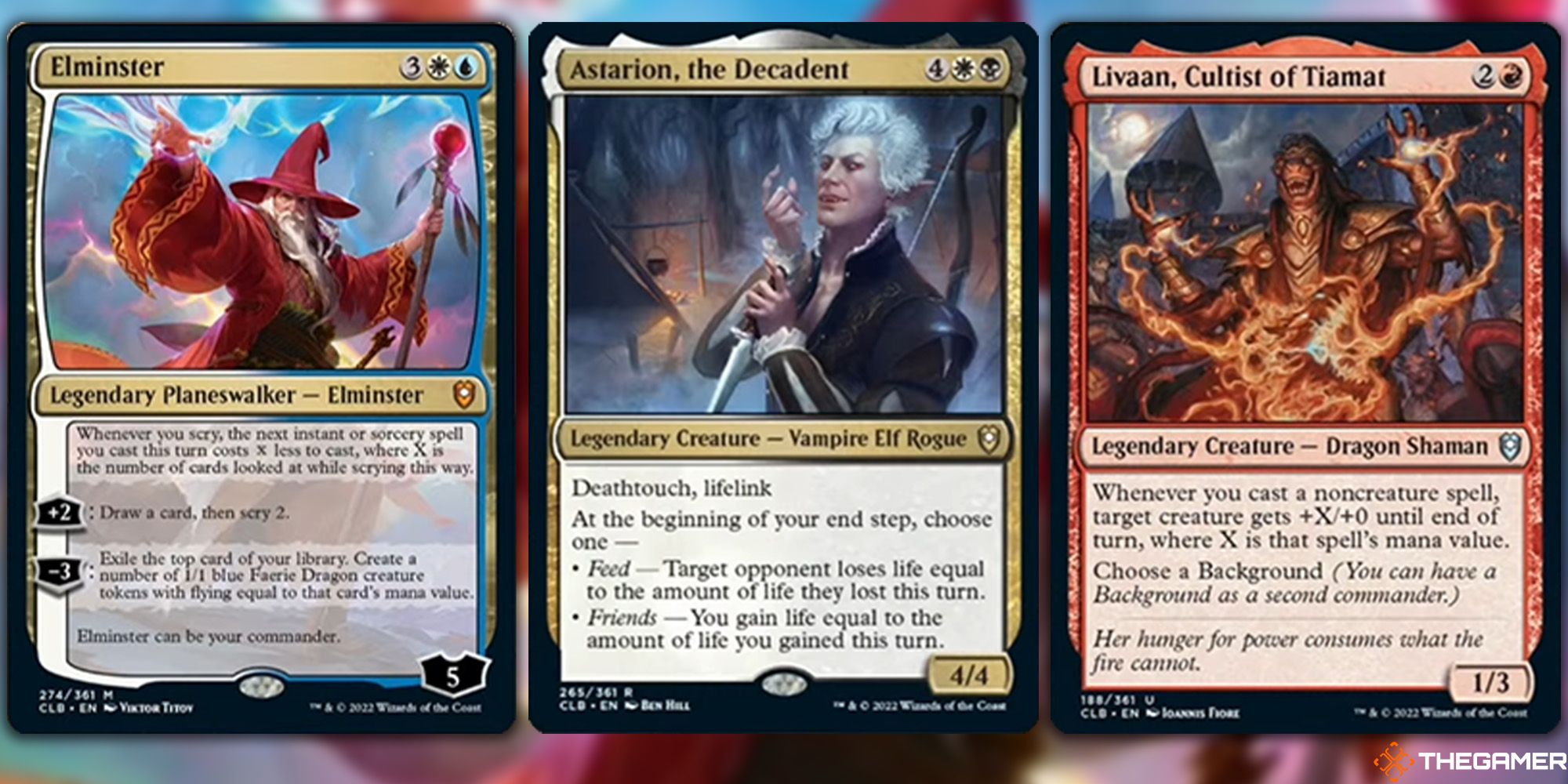 Alongside older names like Elminster (a new Planeswalker commander), Bhaal, and Dynaheir, who all appeared in previous Baldur’s Gate games, we’ll also be seeing newer companions from the upcoming Baldur’s Gate 3. This includes characters like the vampiric Asterion, the wizard Gale, and the Gith Lae’zel, Vlaakith’s Champion.

That last one is particularly important, as Battle for Baldur’s Gate features a few elements more popularly associated with another D&D setting, Spelljammer. Though this is still a very clearly Baldur’s Gate-centric set, characters like Lae’zel come from the Astral Sea, Spelljammer’s primary setting. There’s even a spaceship like those you’d see in Spelljammer, with Nautiloid Ship serving as a powerful new vehicle.

It isn’t all deep lore cuts, though. A number of the commanders have been made specifically for the set. For instance, Livaan, Cultist of Tiamat is a Dragon Shaman, showing the dragonborn who live in the city of Baldur’s Gate. There will also be ten uncommon-rarity, two-colour commanders, who each highlight one of the drafting archetypes of the set. 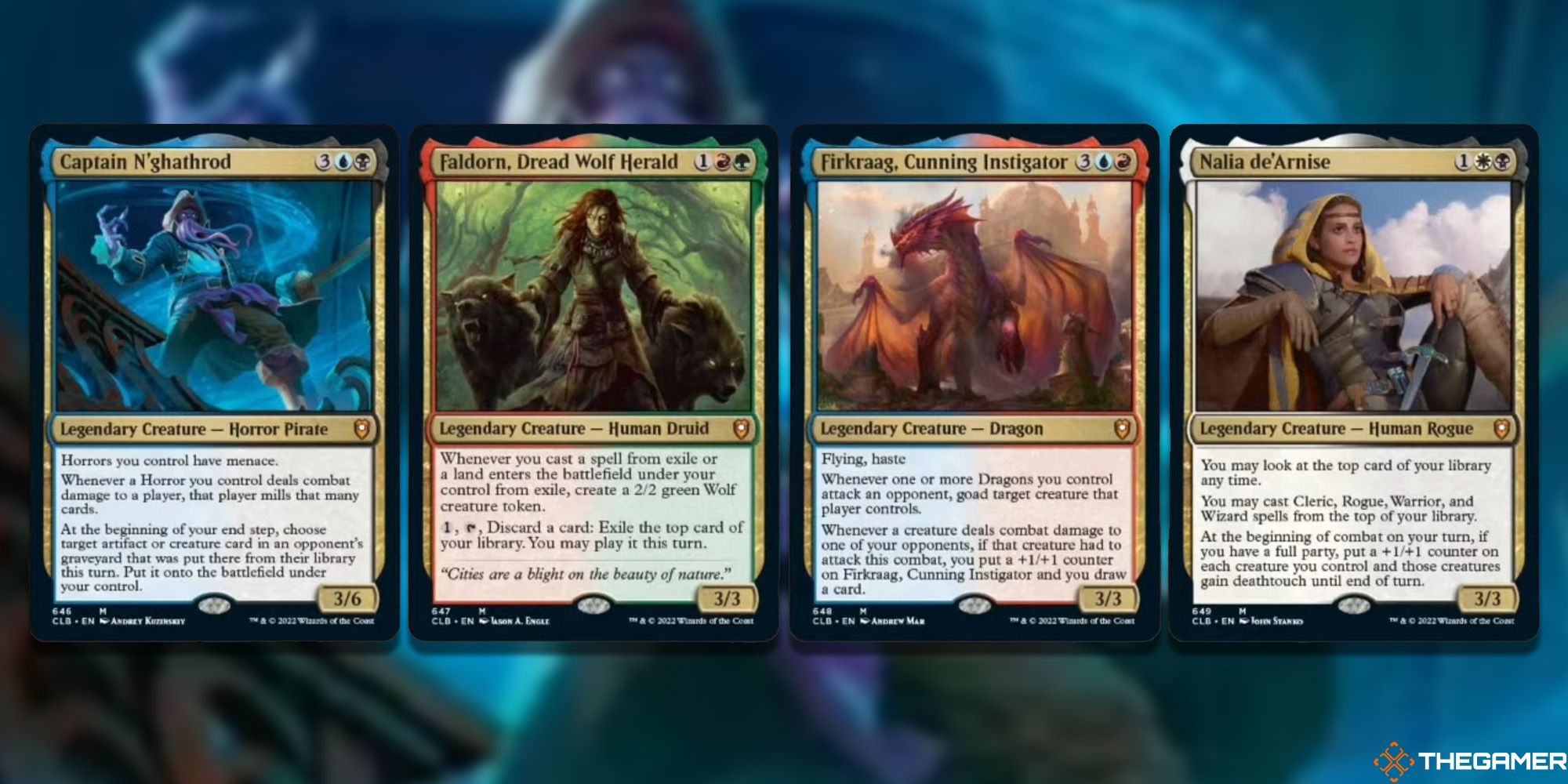 Finally, we saw the four face cards of the Commander decks:

We won’t see much more of these four commanders until the full reveal of their decks on May 30 and May 31. 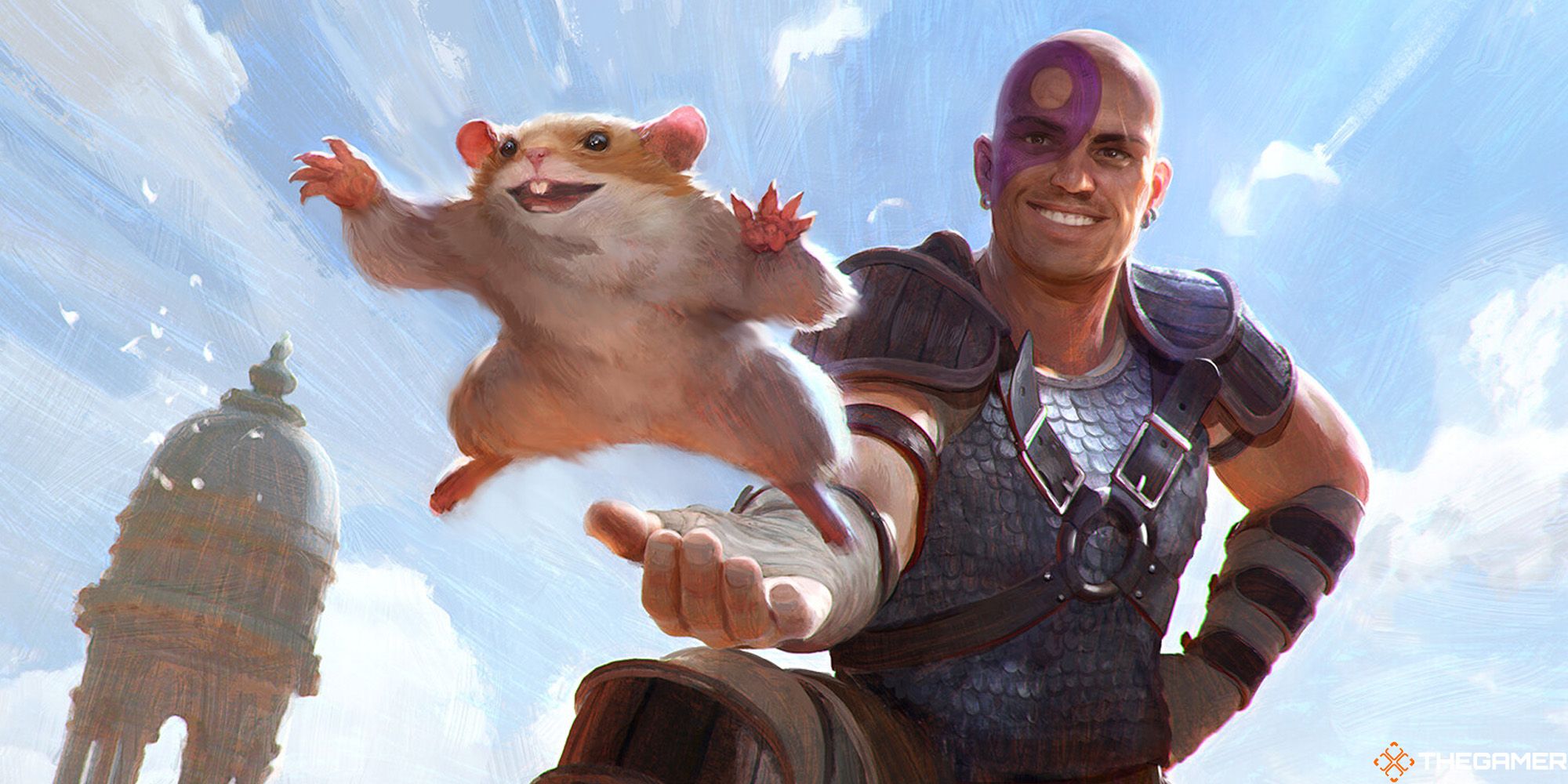 Like all draftable sets, Commander Legends: Battle for Baldur's Gate has numerous themes running throughout it to make drafting easier. We haven't had the full range of draft archetypes confirmed just yet, but Wizards has revealed what each of the primary colours will be doing in the set.

White will focus on token generation, with plenty of go-wide strategies. Blue will be all about saboteur effects (effects that trigger on combat damage), evasion, and flickering (exiling, then returning to the battlefield). Black is staying very traditionally black and centering on graveyard and sacrifice themes. On the other hand, Red is focusing on Dragon tribal and rewarding players who try to attack every opponent every turn. Finally, green sticks to what it knows and plays with big creatures and finds ways to make them even bigger.

There will also be ten two-colour draft archetypes, signposted by an uncommon legendary commander each. We don't know what these will be just yet, but we do know that Dimir (blue/black) will be the colour pair most focused on the new initiative mechanic.