You are here:
Home / Even Johnny Silverhand Doesn’t Expect The Spanish Inquisition

A good old-fashioned reference never goes unappreciated for long, and Cyberpunk 2077 is chock full of them, as one Reddit user points out in an amusing screenshot from one of the game’s missions. It references the Spanish Inquisition, and honestly, we weren’t expecting that.

Cyberpunk 2077 launched on December 10 to extremely mixed reviews. While some fans were excited by the detailed open world and the presence of Keanu Reeves’ character Johnny Silverhand, others were upset by the number of game-breaking (and sometimes dangerous) bugs and limited character customization options. There have even been some cases of legal action taken against parent company CD Projekt because of the game’s less-than-stellar performance on the Xbox One and PS4. Still, after multiple patches and many refunds, the game seems to be gaining in popularity again, to the point that people are finding the more hidden and hilarious gems the game has to offer. 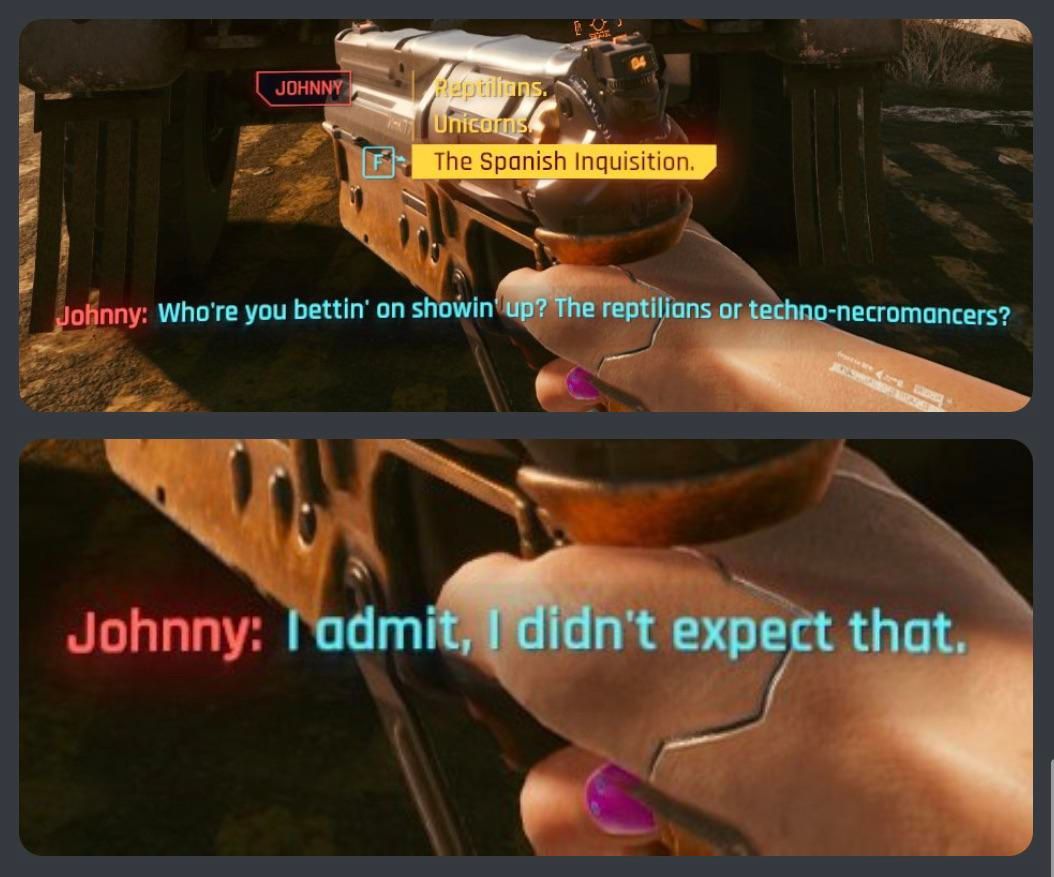 Take for instance this Reddit user’s fun screenshots from a side mission with Johnny and Gary to Victor’s clinic. When asked who they’re betting on showing up, V has the chance to reply with either the Reptilians, the Unicorns, or the Spanish Inquisition. When you choose that option, Johnny responds with, “I admit, I didn’t expect that.” It’s a fun nod to the British comedy group Monty Python, which has a cult popularity surrounding their various silly movies and their television show Monty Python’s Flying Circus, which ran in the seventies and from which the Inquisition is drawn.

Related: The Witcher 3 Has An Awesome Monty Python Easter Egg

Fans in the comments are torn in their reactions. Some, familiar with the fifty-year-old sketch, are enjoying it immensely. “I stopped the game to laugh out loud [at this],” replied user leMolunk. Another commenter, user ResidentElmo, laments that they didn’t read the last option before selecting Unicorns. Some commenters are not as happy with the inclusion of the reference. User JohnStuart_Shill says, “this game is written by Redditors, and I mean that in the least flattering way possible.” Others don’t understand why people would be referencing such an old sketch in a game apparently set in the future, although it has been pointed out that the sketch has been around so long as to become a standing meme even without the internet’s influence.

Still, it’s probably best summed up by user Tigercash, who says, “Show me a crpg that doesn’t have a Monty Python reference and I’ll show you ten that do.” We should probably brace for many more Python references in at least European-developed games. Unless, of course, they opt for something completely different.

RELATED NEWS
StackPulse exits stealth with $28 million to automate incident response and remediation
OncoHost raises $8 million to develop AI that predicts cancer treatment responses
Lara Croft Could Be Fortnite Season 5’s Next Hunter
K Health raises $132 million to launch AI-powered telemedical pediatric service
Recent Posts
This website uses cookies to improve your user experience and to provide you with advertisements that are relevant to your interests. By continuing to browse the site you are agreeing to our use of cookies.Ok