You are here:
Home / Escape Academy: Under Pressure Walkthrough

After becoming a fully-fledged student of the Escape Academy, it's time to flex your skills and learn how things work around here. Under Pressure is one of the first two levels you can take on after enrollment and it's possibly the tensest mission in the entire game.

This mission throws a lot at you. Power cuts, a rising water level, variable time limits, and a whole lotta passwords. Hope you've got a pad and paper with you, because you'll be under a lot of pressure to remember everything you can about this level! 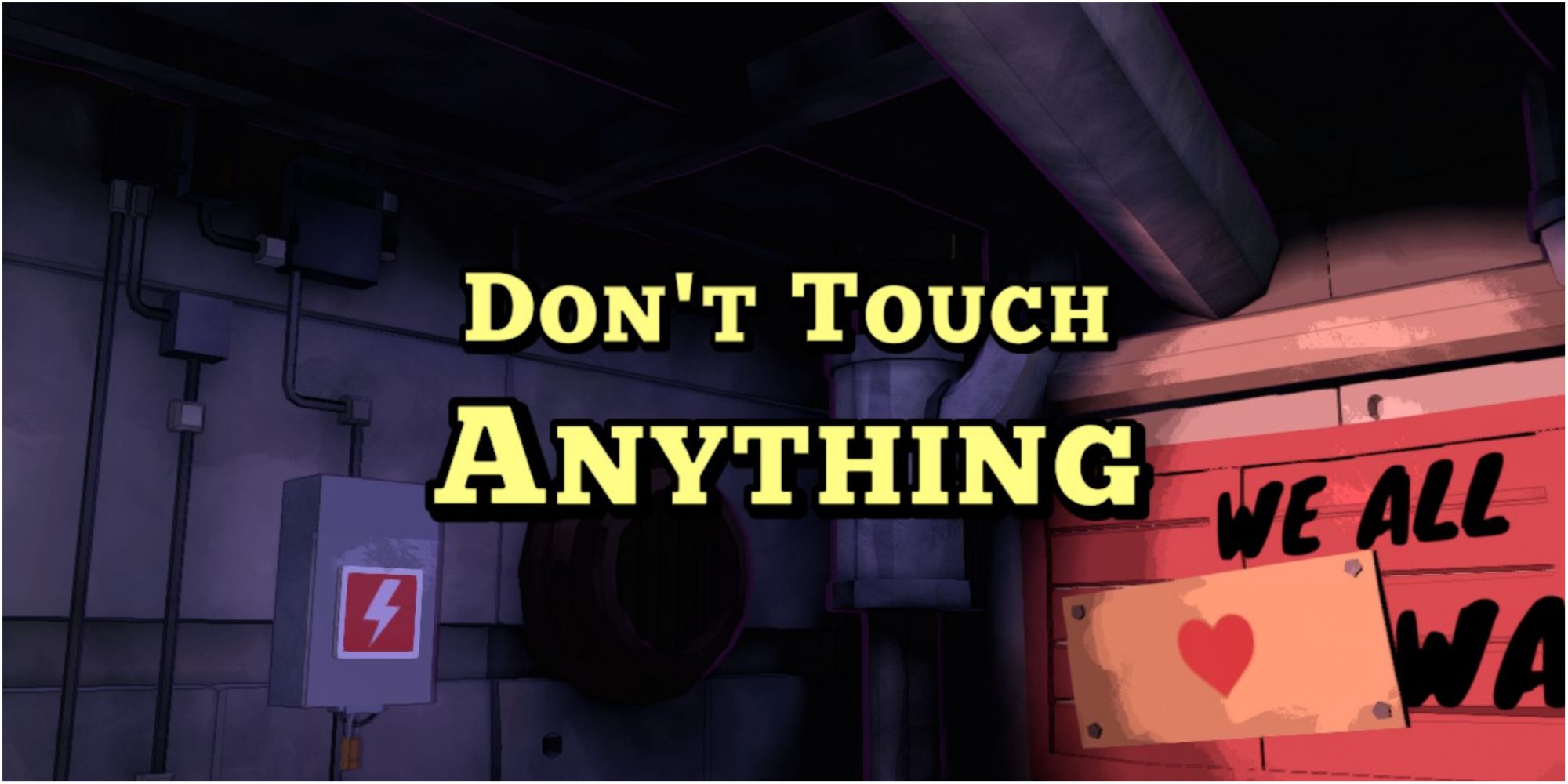 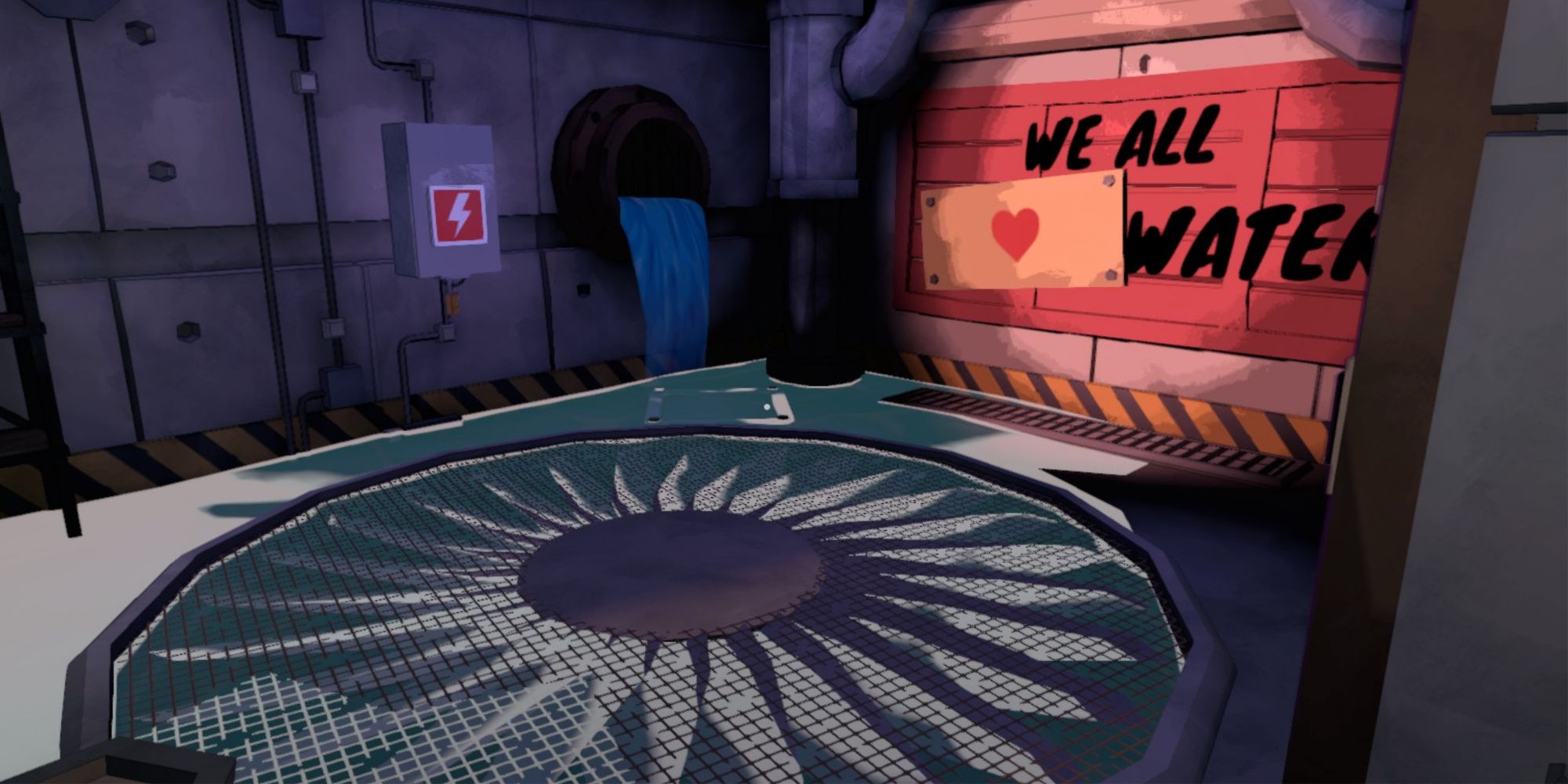 First thing's first, open the briefcase on your left and pick up the Small Key within. Looks quite large for a small key, huh?

Use the Small Key to unlock the padlock that's holding the cabinet on the wall shut tight. Inside, you'll find a power switch. Flip the switch to turn the lights out and then look around – looks like there's some glow-in-the-dark paint to contend with in this level. 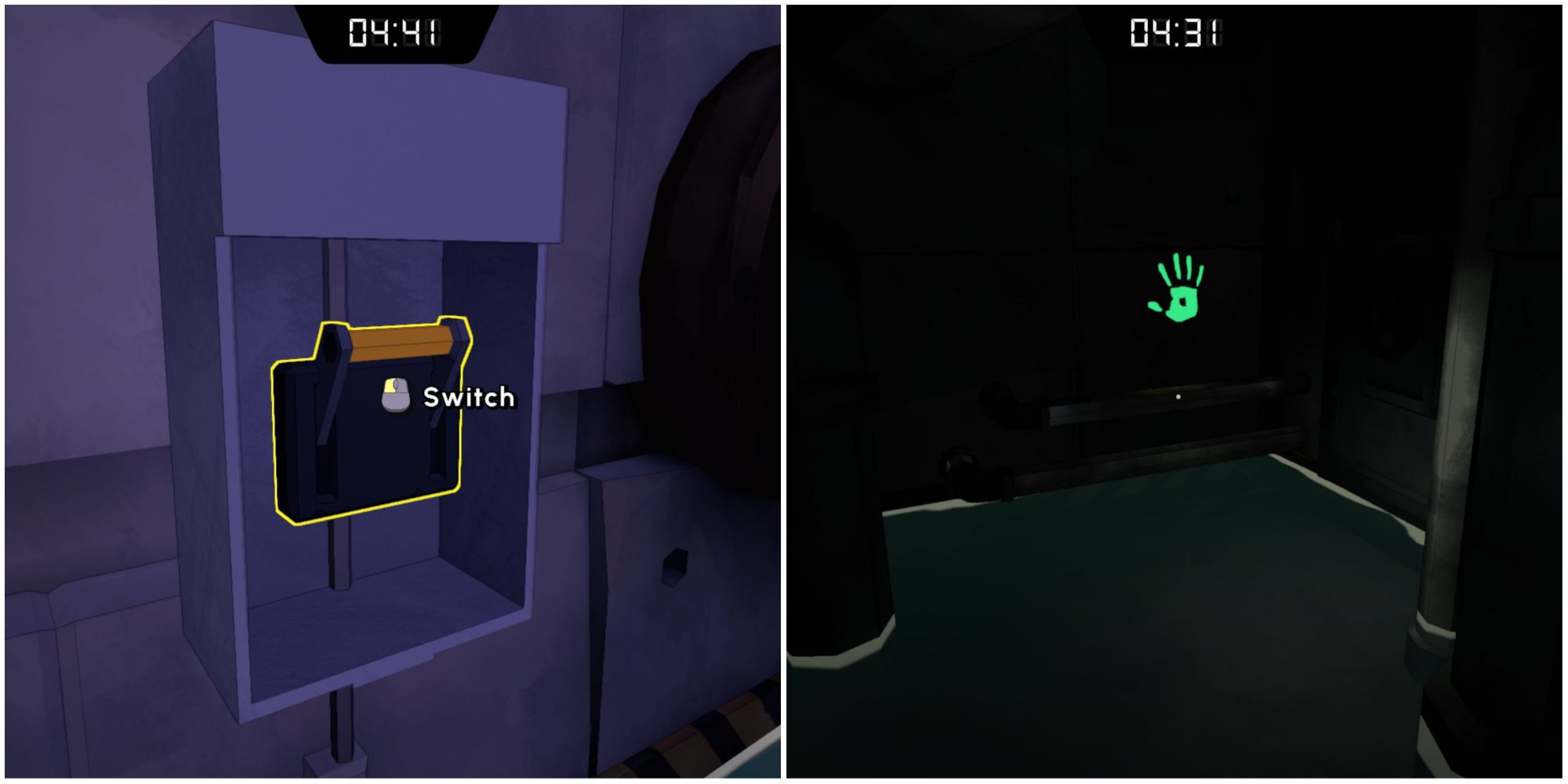 You'll see a glowing handprint in the corner of the room. Head on over and interact with it – you'll reveal a secret compartment containing a toolbox. You'll pick up Clippers, a Hammer, and a Screwdriver. Remember that you have these.

Don't worry about your timer being incredibly short. As you reach new floors in this level, you'll get more time added on.

With the lights on or off, use the Hammer to remove the wooden plank from the board to the right of the switch. With the lights off, you'll reveal the word 'FEAR' glows brightly in the dark. 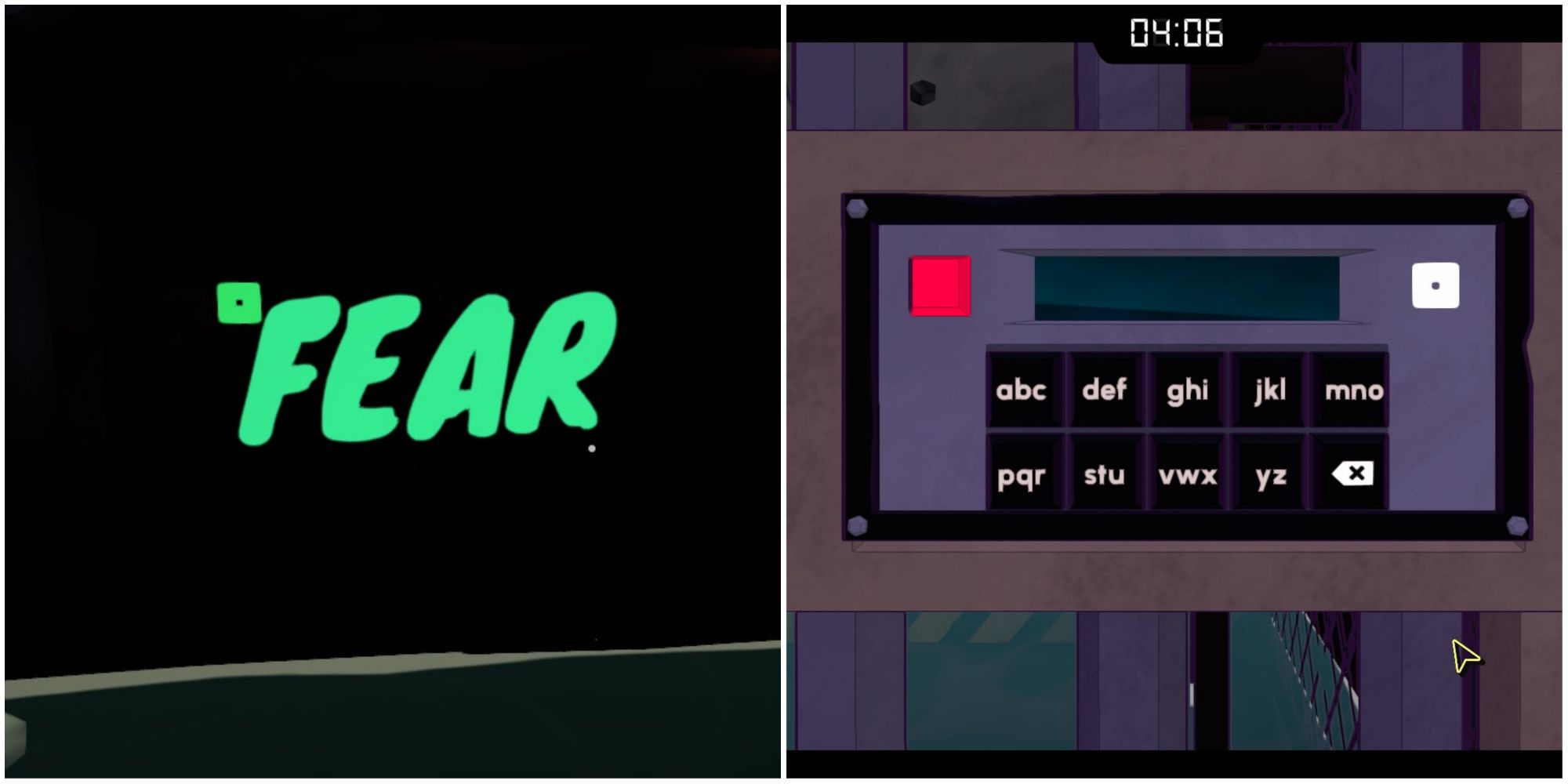 Make sure the power is turned back on (and the lights are on) and interact with the password-protected door. Each button has some letters on it, and you'll have to press them to spell a word – in this case, fear. Press the following buttons in this order:

The door will open and you can climb up to level two. 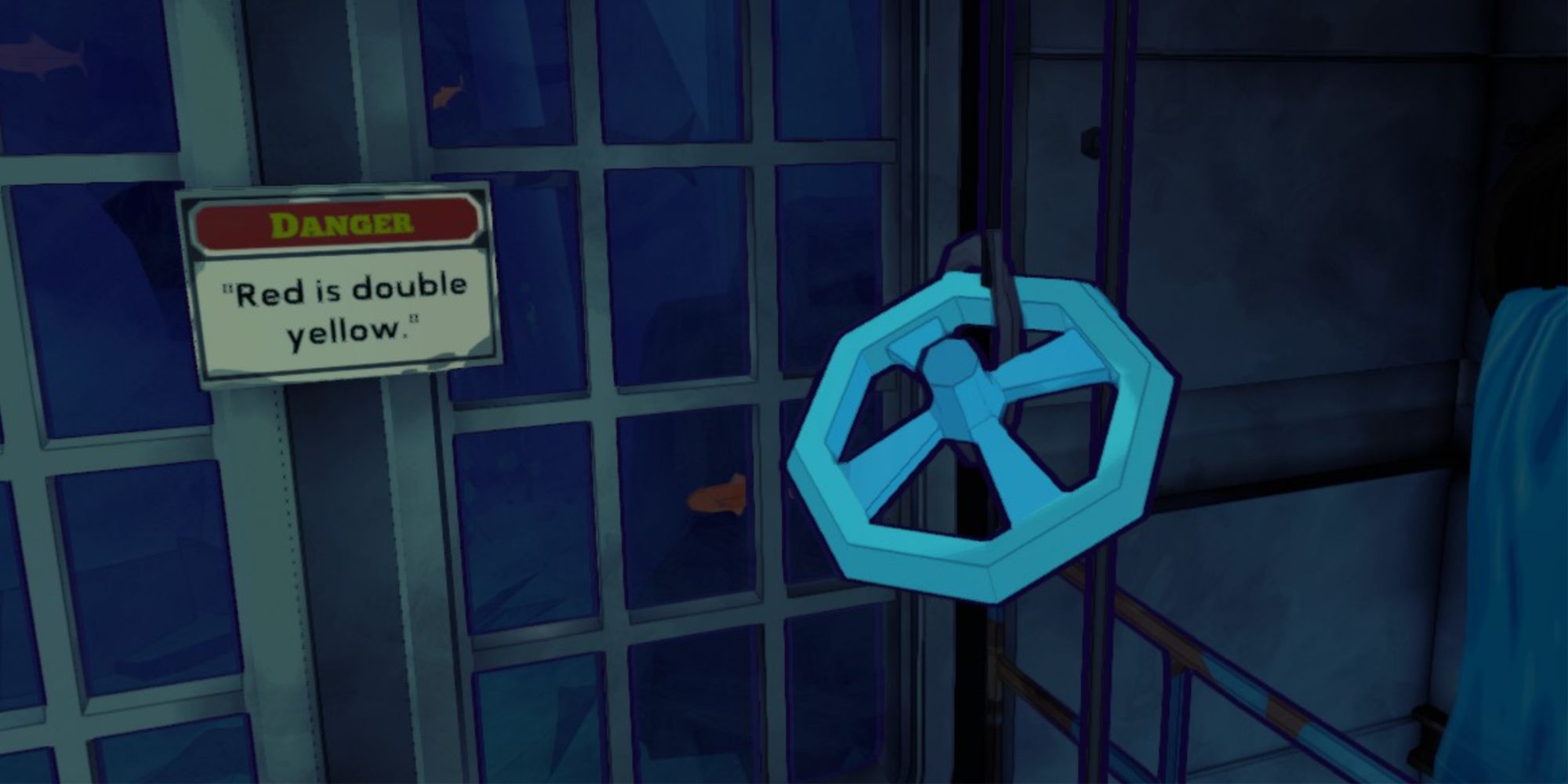 Once you reach the second floor, a few more minutes will be added to your timer, so breathe.

On this floor, you need to do two things:

Examine the rope without a padlock attached to find the Blue Valve Handle. Use the Clippers from the first floor to get the item and then place it on the door. 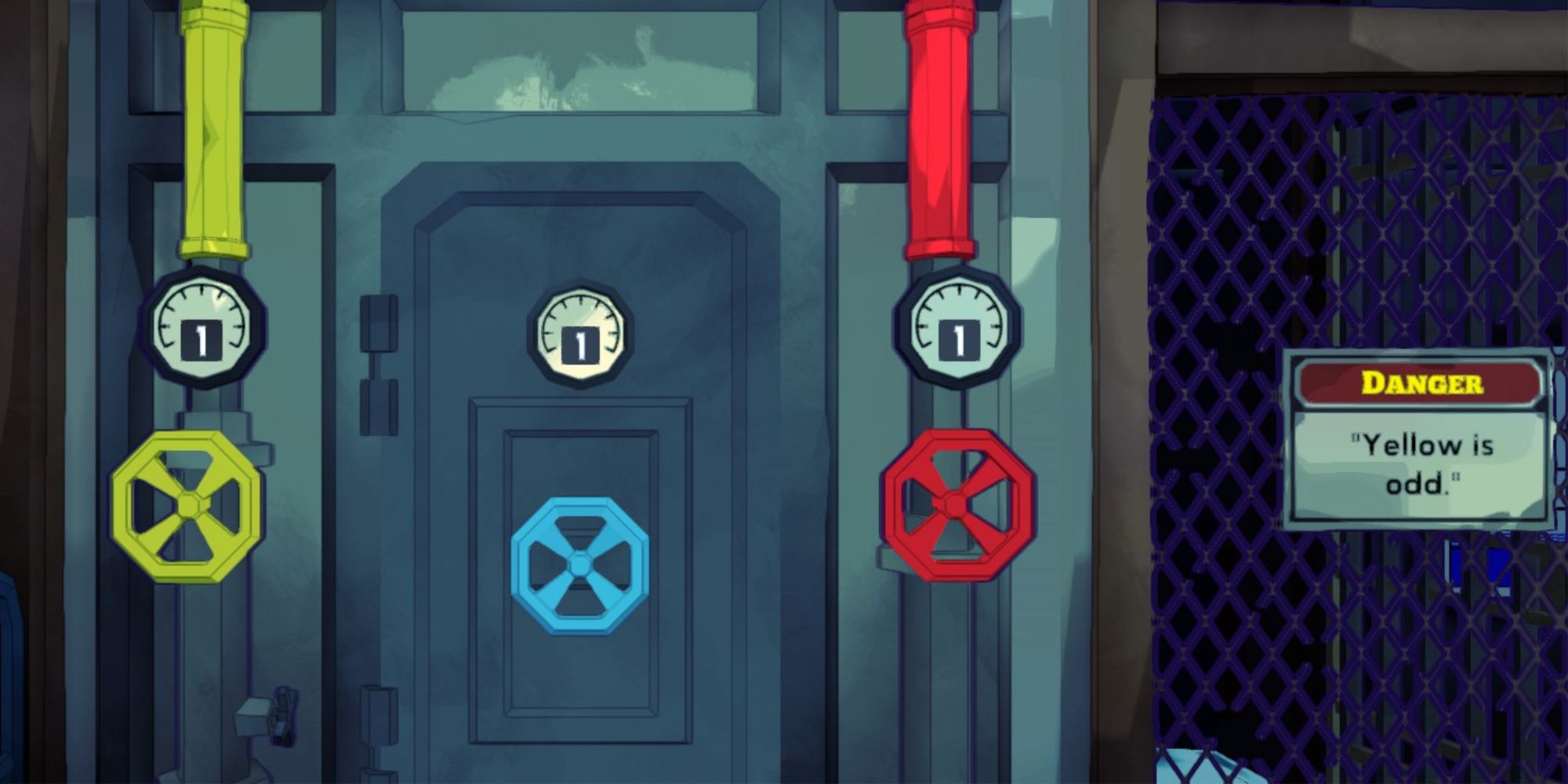 With that complete, you must solve the simple numbers puzzle by turning the valves and following the rules that you can find around the room:

We can figure out that yellow's valve should be set to three and red should be set to six. Yellow is odd but red is double yellow. As the highest number a valve can be set to is six and there can't be a number between one and two, this is the only solution. Then, as we know the middle valve cannot be five, it must be four.

Inside, interact with the winch to pull up a Rusty Key. Take it and use it to grab the Handicam from the other rope that reaches the ceiling. Now, return to the winch and attach the Handicam to the hook. Spin the wheel to make the hook dive back down, and then head back to the main part of the room. Turn to the right to see the TV, which now has the word 'WILL' on it. Use this code to solve the password-protected door. 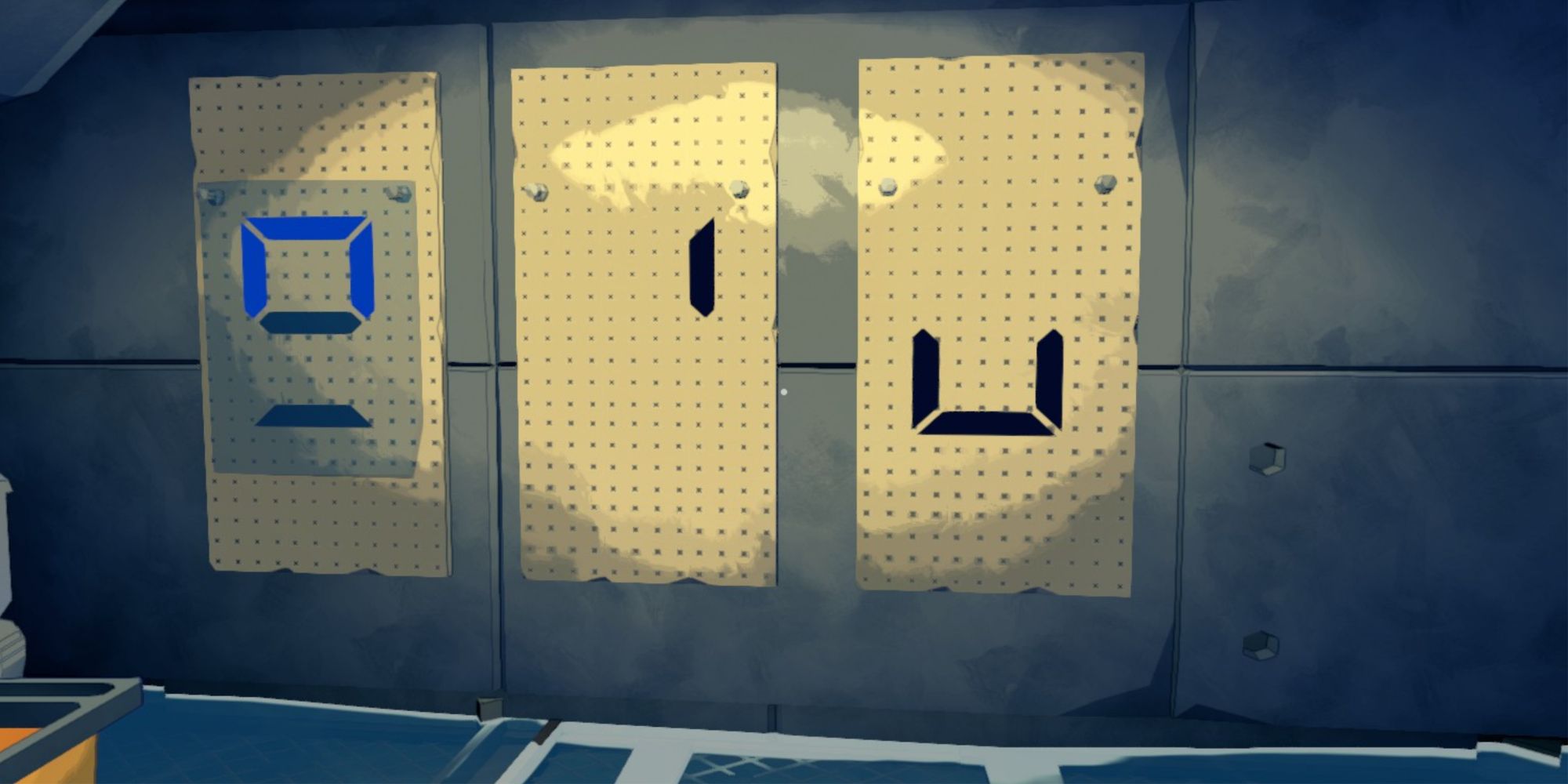 This floor is very cluttered, so follow the directions below closely.

At this point of the level, you're tasked with working out the code to the safe. You have instructions for different versions of the safe, but not this one. 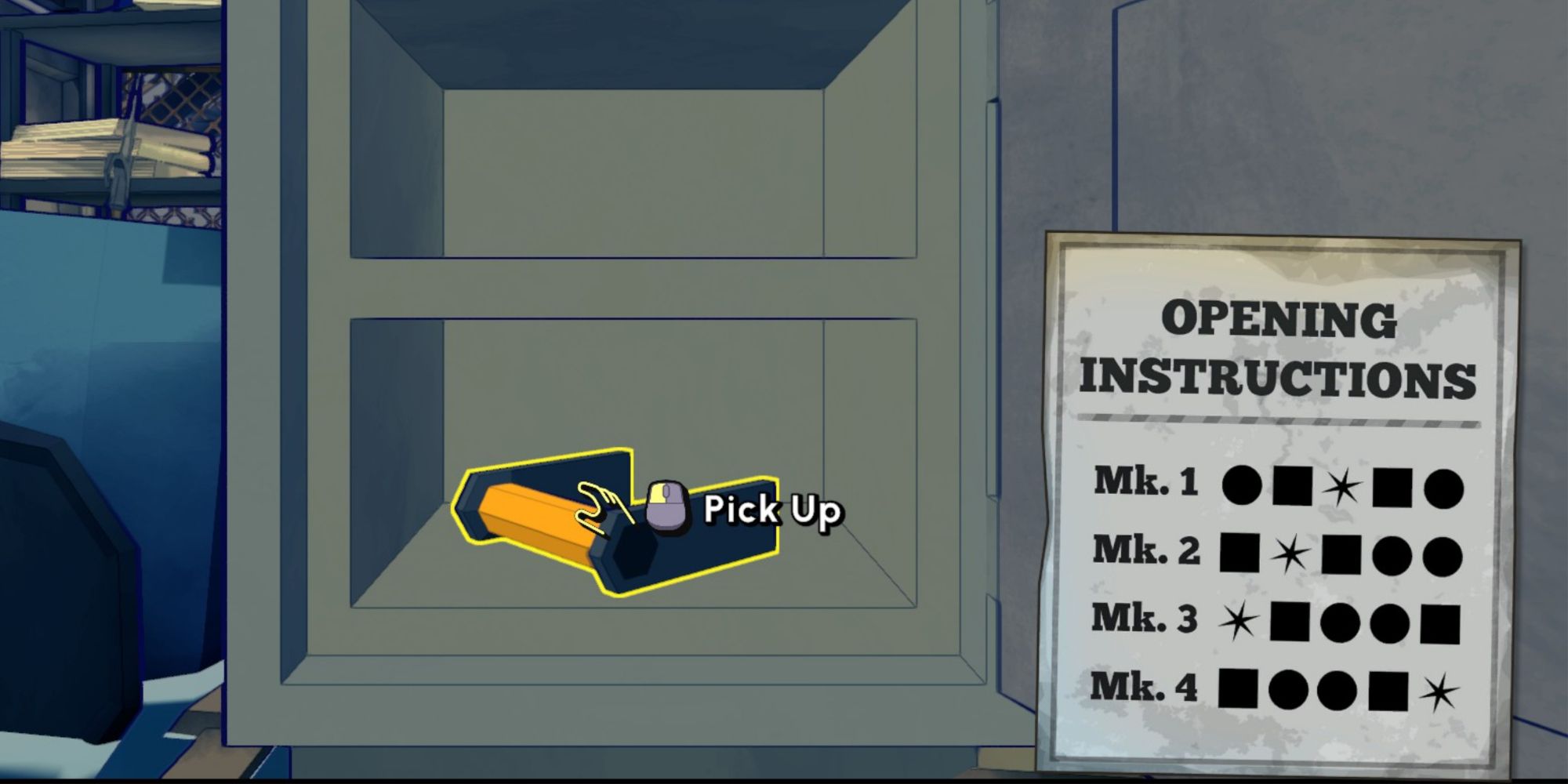 Open your inventory and Pin the Opening Instructions to your screen. This will make it far easier to see what you have to do.

The solution is quite simple:

Thusly, you can work out that to unlock the safe, you must do the following:

The safe will open and you'll find a Switch Lever inside. The power box is locked, however, and you need a code. To find the code, you'll need to arrange the Acrylic Sheets on the poster boards near the entrance to the level in the correct order, making a numerical code. From left to right, place the following Acrylic Sheets in order: 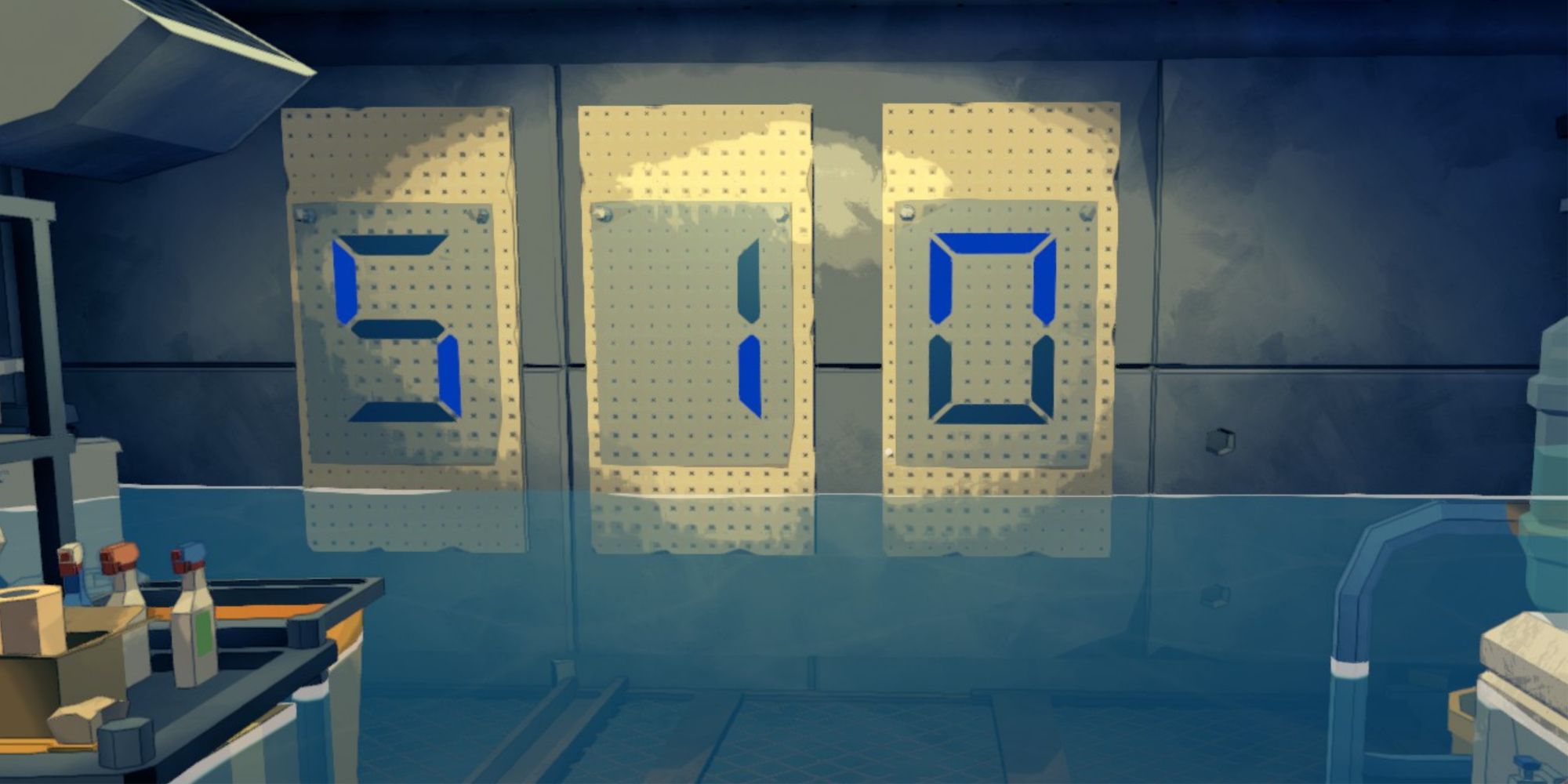 You'll see that the boards now have the number 510 on them. This is the code that you'll need to use on the code lock. Once open, slot the Switch Handle in and turn off the lights. Turn around to notice a glowing 'W' next to the poster boards. 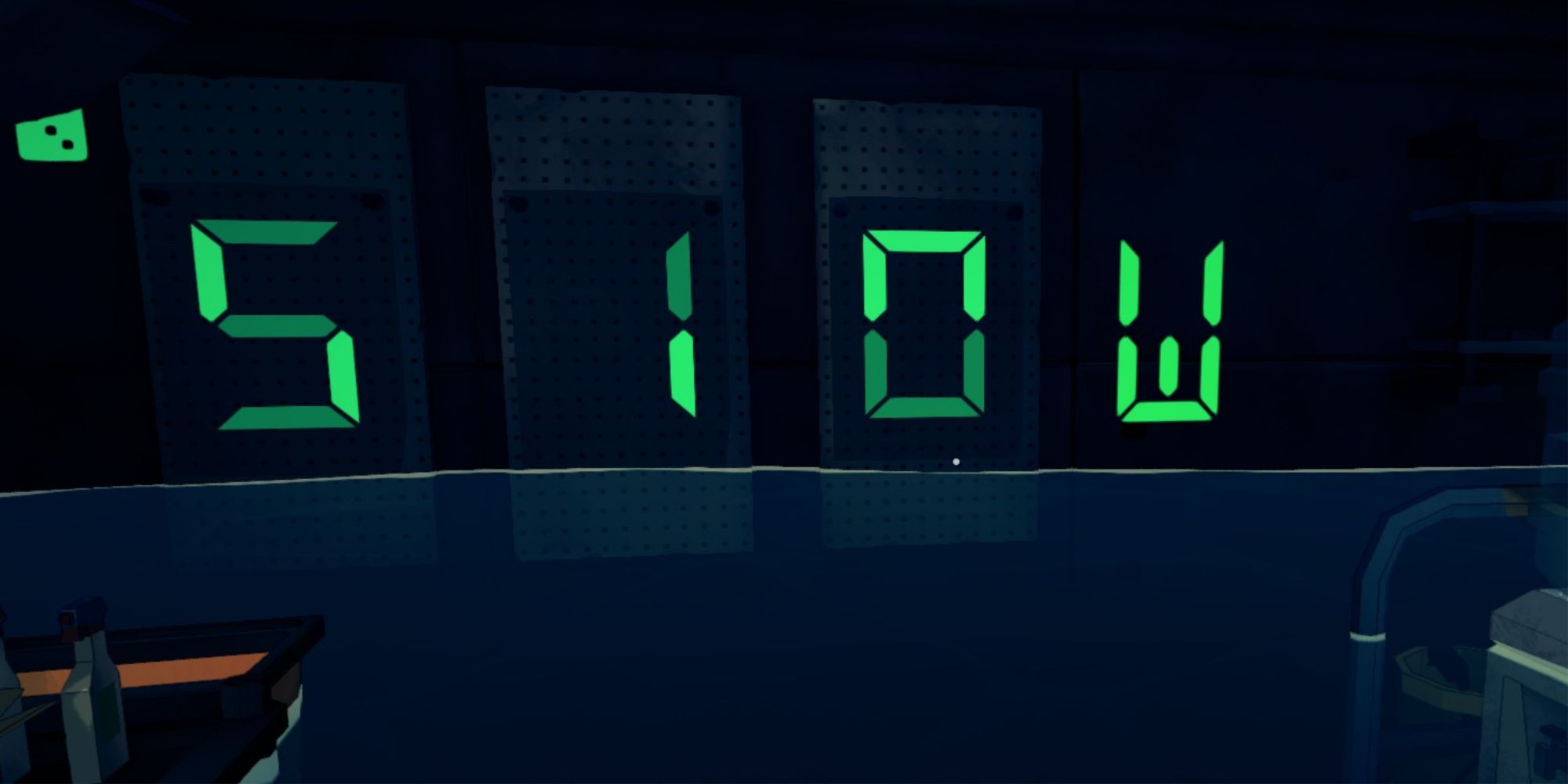 What once read as 510 now reads as 'SLOW.' As you might expect, this is your newest password. 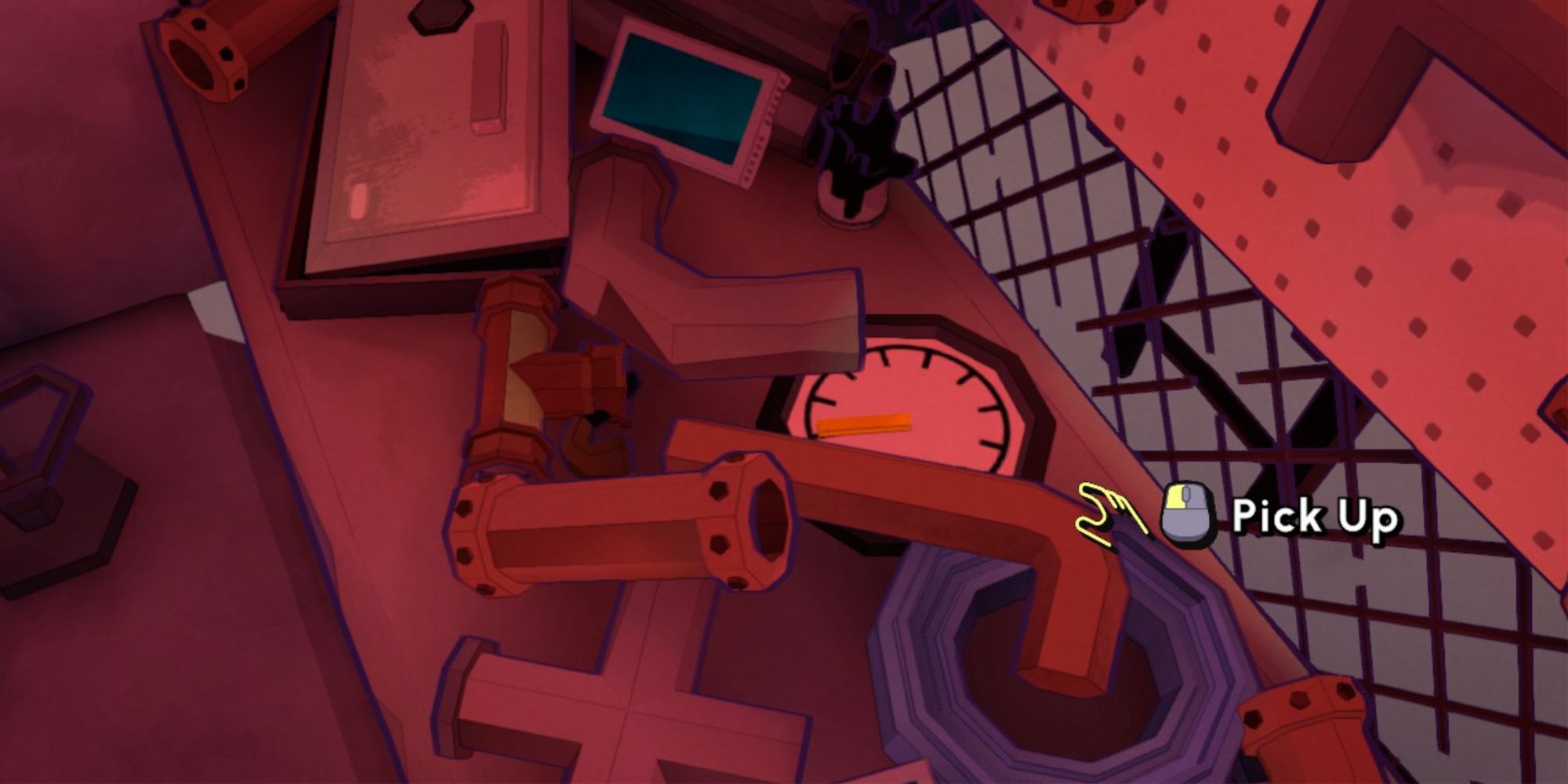 This floor is a bit simpler than the previous one, don't let the sped-up music and the red lighting fool you.

The first thing you need to do is pick up the two Strange Devices from the cluttered table ahead of you. Then, pick up the Cipher Sheet behind you and pin it for ease of reference. 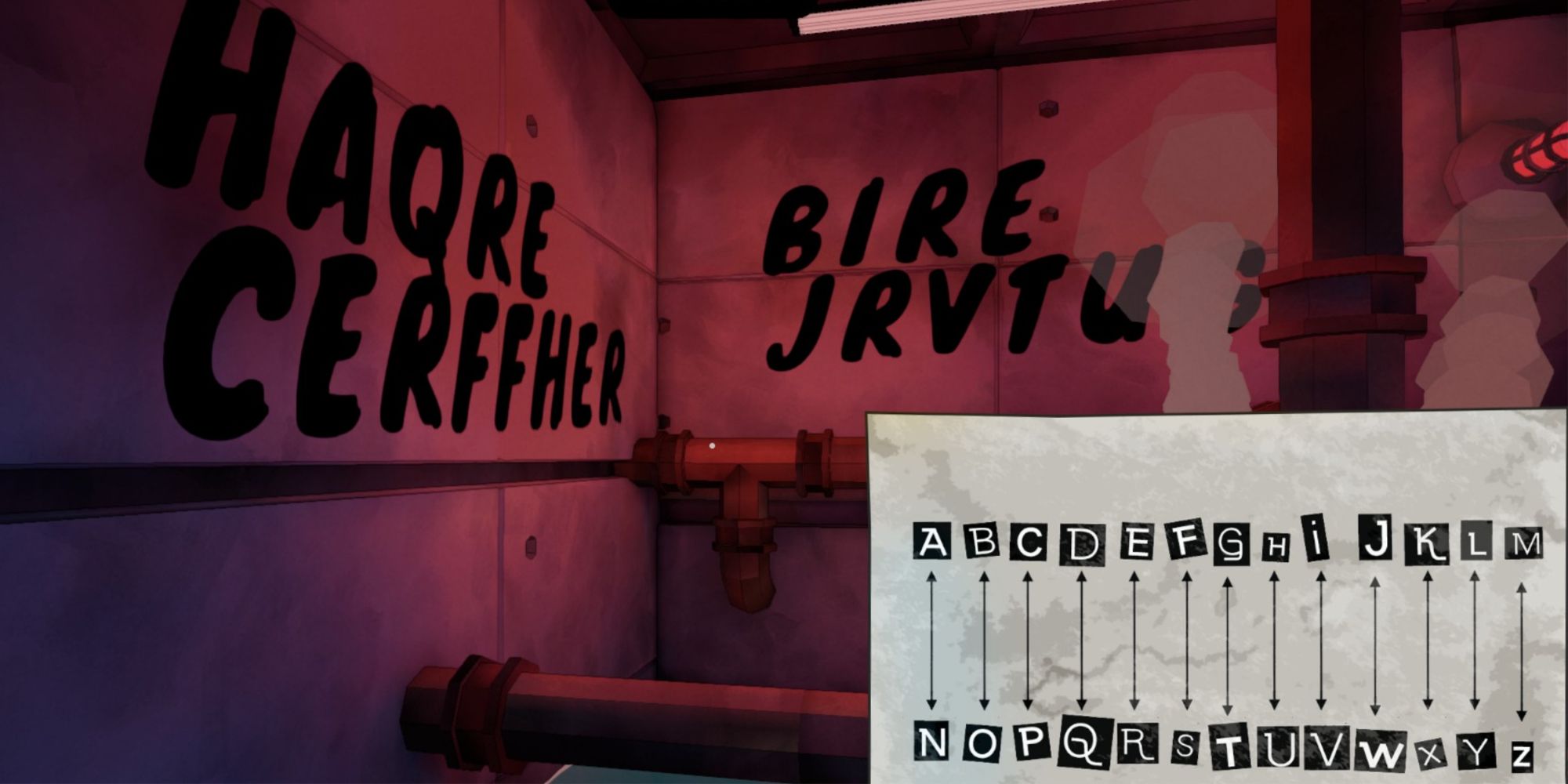 You'll notice four words on the walls written in blank paint. They seem like nonsense, but that's why you have the Cipher Sheet. With that, HAQRE CERFFHER becomes UNDER PRESSURE and BIRE JRVTUG becomes OVER WEIGHT. 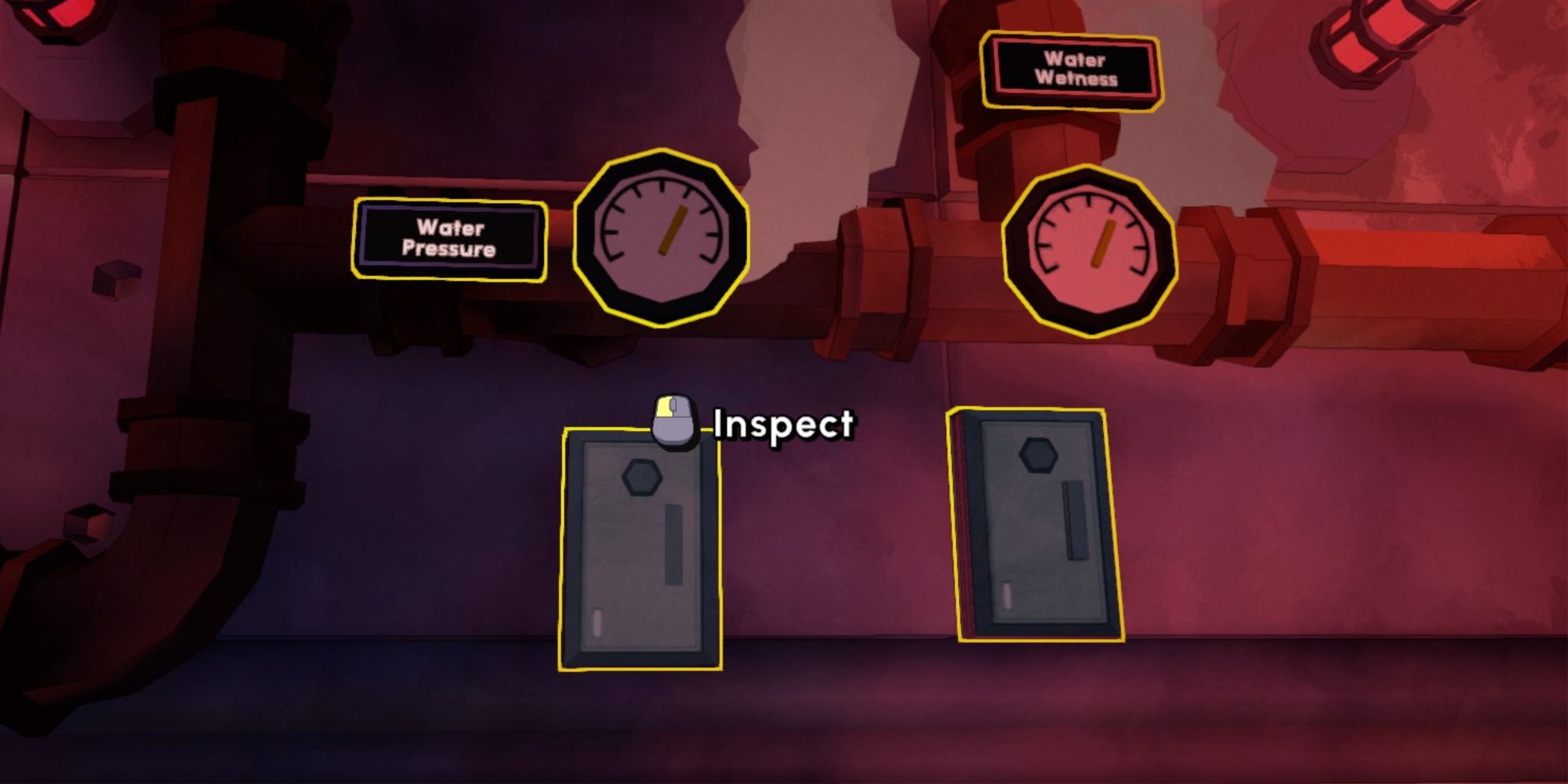 With these in mind, take a look at the various boxes on the walls. All of them are attached to named, fluctuating meters. What you need to do now is open the boxes attached to the Water Pressure and Water Weight dials. To do this, use the Screwdriver you picked up on the first level.

Put those two smaller codes together and you get the word 'YOUR.' This is this floor's password. 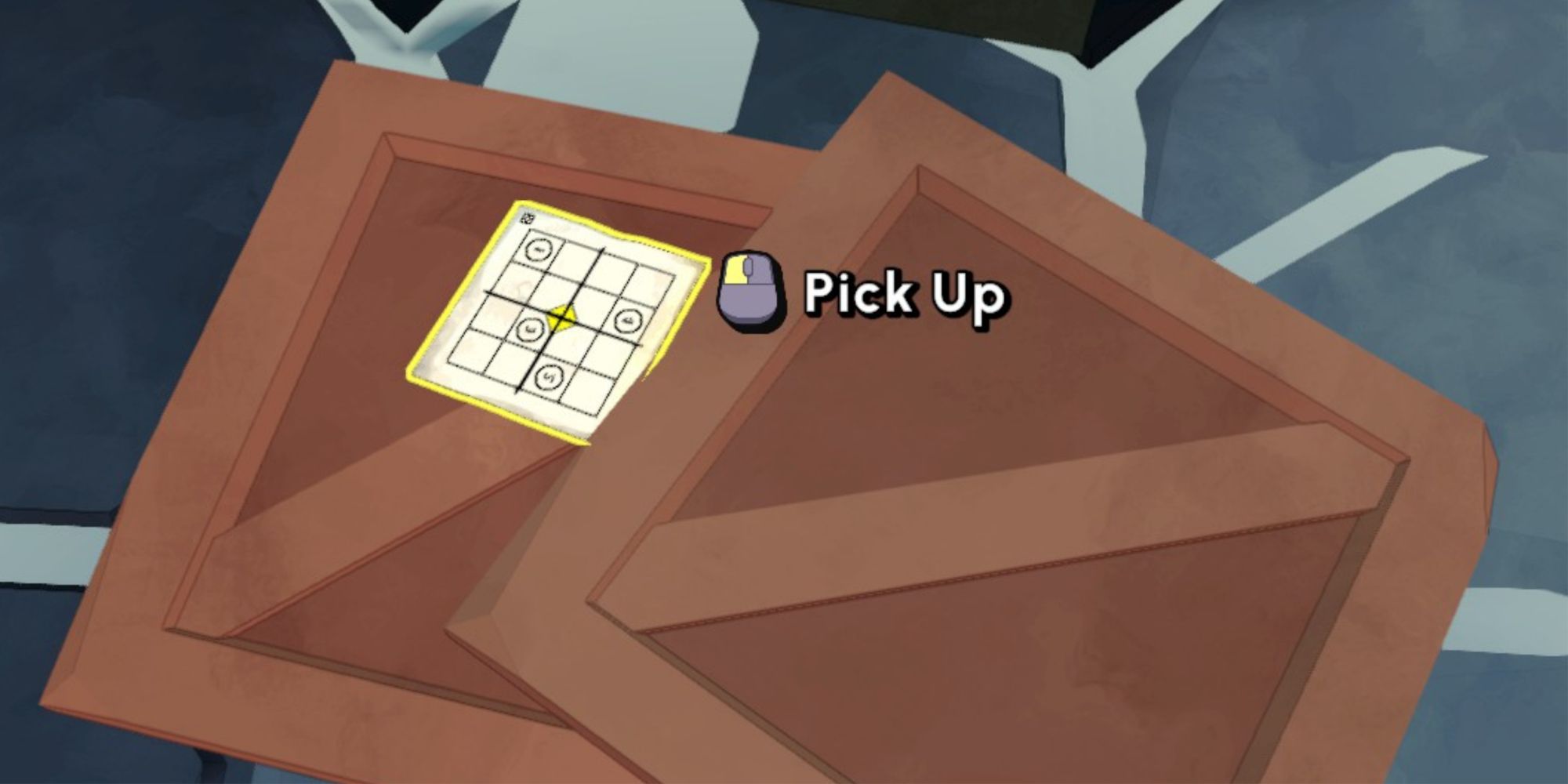 This one can get a little involved. Now is a great time to pause for a moment and grab a pen and paper, it's better than trying to remember everything you need to.

Firstly, examine the crate in the middle of the floor. It's marked 'fragile' – use the Hammer to smash it open and retrieve an Old Map. This will be used later. 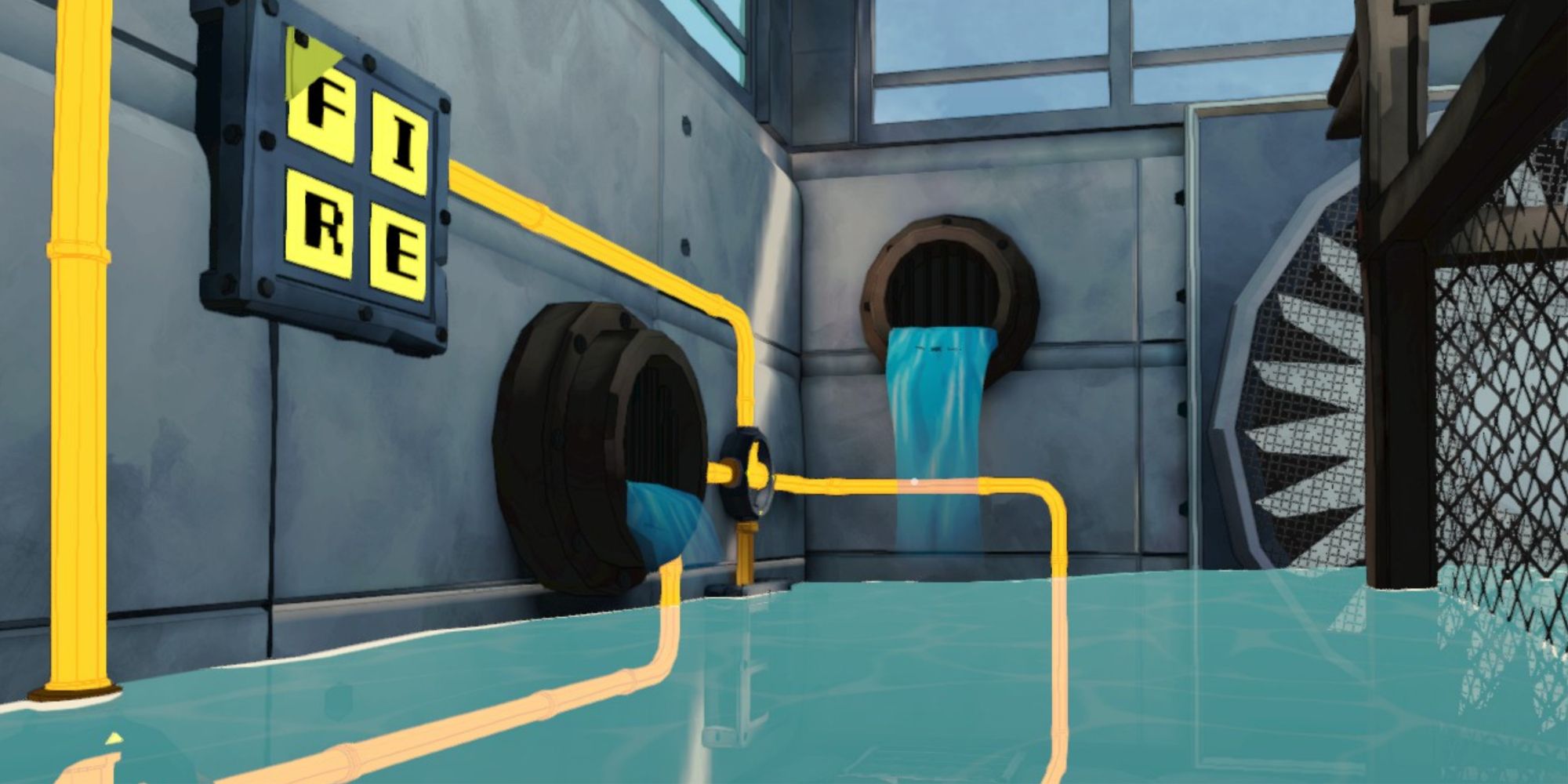 Flip the switch on the wall and start following the power pipes. They'll lead to junctions that you can rotate to power other sections of the system, and boxes of four lights that, when powered, show a word. Your goal here is to power the boxes that have small triangles in one of their corners. Every time you do so, make a note of the word and where the triangle is placed.