Where does your enterprise stand on the AI adoption curve? Take our AI survey to find out.

Env0, a self-service cloud management platform for infrastructure as code (IaC) architecture, today announced that it closed a $17 million series A funding round led by M12. Cofounder and CEO Ohad Maislish says that the funding will be used to expand Env0’s IaC platform and support the visibility, predictability, and governance of its customer deployments. 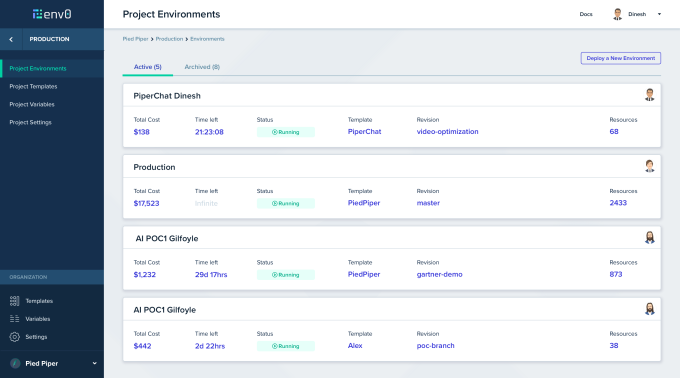 Env0 allows customers to approve infrastructure change requests from existing workflows, automatically deploying changes and helping to limit direct cloud access to unauthorized users. With Env0, admins can set up controls to establish cloud credentials and custom flows, which provide the ability to insert code into the deployment process to extend IaC capabilities.

The company was founded by Maislish and Omry Hay, who were working at cloud- and DevOps-projects-as-a-service companies when they met in 2018. The two came to the realization that although IaC is accelerating the move from manual deployments to code execution, there’s a missing piece: an automation and management layer on top of IaC. Their solution became Env0.

“Env0 enables DevOps engineers and teams to collaborate on and automate the provisioning of … workflows and IaC. The main use case is IaC automation, simplifying the provisioning of cloud deployments with greater visibility, predictability, and governance,” Maislish told VentureBeat via email.

Despite its benefits, many companies face an uphill battle on the road to adopting IaC. According to a recent Snyk report, only 26% of IaC users are confident they can spot security mistakes in their configurations. Forty-eight percent of organizations responding to the same report say that automated code testing for IaC would bolster their efforts to spot misconfigurations.

To this end, Env0 can automatically detect phonomena like drift and make sure resources in the cloud provider are aligned with IaC. The platform also alerts customers once an anomaly has been detected, giving them the ability to view and fix it.

Env0 can also run cost estimations to give companies a sense of anticipated capital expenditures. In addition, Env0 can append tags to resources based on the project and environments they’re a part of, correlating the cost over time of environments and identifying cost regressions caused by changes while exposing spending by project or team.

While it has rivals in HashiCorp Terraform Cloud, Scalr, Spacelift, and others, Env0 claims to have attracted dozens of paying customers and thousands of users in the three years since its founding. The company, which is headquartered in Tel Aviv, Israel and Sunnyvale, California, has 16 employees and expects to employ 30 by the end of 2021.