This rollercoaster ride is starting to look a little scary. GameStop’s stock price has been on an extreme upward trajectory since last week and is showing no signs of stopping. In fact, social media might be making this upward climb even steeper.

Last night, GameStop’s stock price closed at around $147, but after-hours traders kept pumping that price all evening. And then Elon Musk tweeted a single word: “GameStonk,” along with a link to the now-infamous subreddit WallStreetBets.

When markets opened trading this morning, GameStop started at $354.83, more than double where it left off yesterday. GameStop’s market cap went from $10 billion to over $20 billion literally overnight.

None of this has anything to do with GameStop’s actual performance as a retailer of video games and video game hardware. GameStop’s Christmas performance was adequate and had a few hopeful signs in the e-commerce department, but sales were still down compared to the same time last year and the company is still losing money.

What is actually happening is a bizarre war between Reddit and Wall Street. Retail and amateur investors on the WallStreetBets subreddit noticed that various large financial firms, including Citon Research and Melvin Capital, had taken large, naked short positions on GameStop. Collectively deciding to profit off that position, WallStreetBets decided to start buying up GameStop stock, leveraging their combined capital to create a “short squeeze bubble.”

This bubble has continued to grow all week. GameStop ended trading last Friday at $64.75 but began trading Monday morning at $96.80. Wednesday morning started beyond $350 but has since dipped down to just $275 as of the time of this writing. 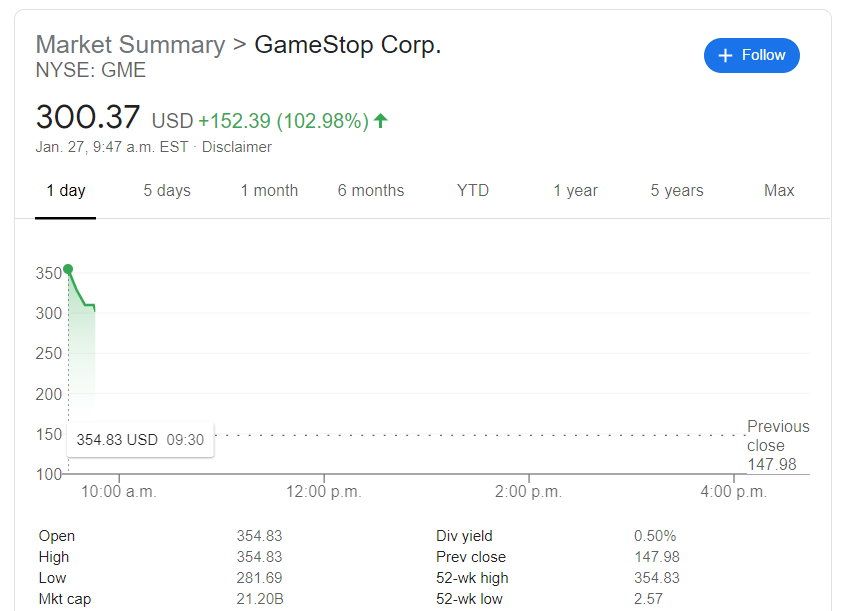 According to MarketWatch, both Melvin Capital and Citron Research have covered their short positions for massive losses.

However, multiple posts on WallStreetBets are asking followers to “hold for $1000,” a price so ludicrously high that it seems unfathomable. No one’s sure where this will end or what the fallout will be, but historically speaking, economic bubbles never really end well.