You are here:
Home / Elder Scrolls Online: All World Bosses In Glenumbra, Ranked

Far to the west of the fantastical lands of Tamriel lies the region of Glenumbra, a land of green forests and luscious fields. Part of the Bretons' home of High Rock, Elder Scrolls Online has done another marvelous job depicting the vast world of Nirn. But they have also added a new form of foe for The Vestige to contend with: World Bosses.

Needing more than one person to defeat, these bosses are found everywhere in Tamriel. At times, they prove quite the challenge to overcome, urging you to return next time after leveling up. But these World Bosses are great fun to defeat alongside your friends, notwithstanding the amount of XP you earn after. It is veritably a surefire way to prove your combat mettle against foes both natural and supernatural. 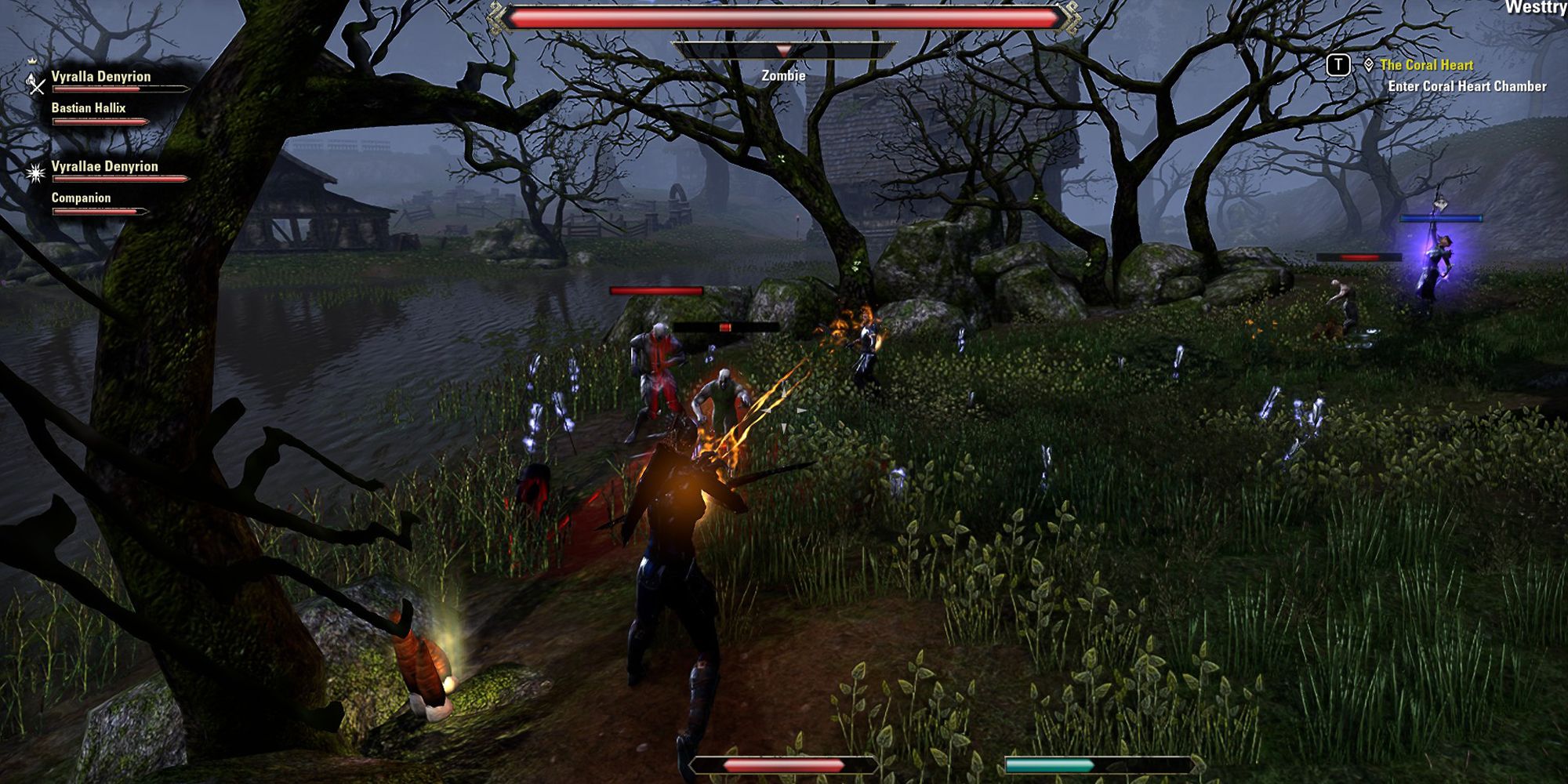 The Elder Scrolls franchise has their own brand of zombies, not unlike the usual zombies of modern pop culture. The result of a twisted ritual by the Bloodthorn Cult, Asard the Putrid and his band of two fellow zombies reside at North Shore Point. However, despite the fact that this is a group boss, Asard and his cronies are not too difficult to overcome.

Aside from a larger HP bar than normal, Asard's move set is pretty basic and nothing out of the ordinary. His cronies are quite simple to dispose of as well. Alongside his standard pummeling with his fists, Asard can also vomit up toxic liquids from its mouth. He even uses this for a wide AoE attack occasionally throughout the fight. Do beware of the latter, since you can get stuck if you don't react in time. 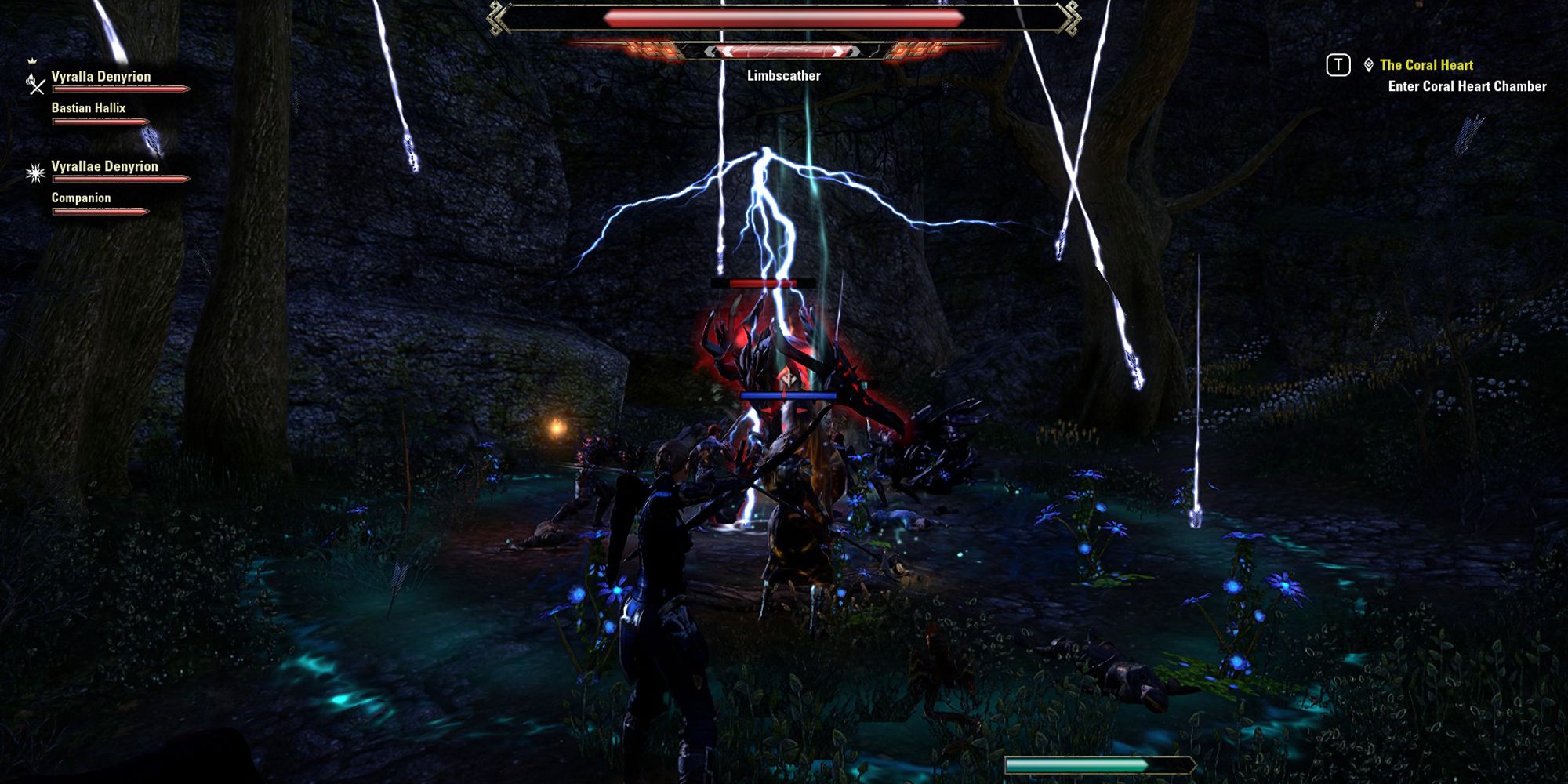 A crimson Lurcher-type boss, the Limbscather can be found in Western Overlook. A living manifestation of Mother Nature, the Limbscather is aggressive in every sense of the word. It largely uses its huge fists to wallop and crush its victims into mush.

It has claw-like fingers, which it uses to slash at opponents, as well as pierce them. The Limbscather is also able to perform an overhead slam that can easily stun you. Its most devastating attack is its ability to unleash a poisonous mass in a wide AoE attack, which can be seen through a red circle on the ground. However, if you have faced other Lurker World Bosses like the ones in Greenshade, then you are not really facing anything new here. 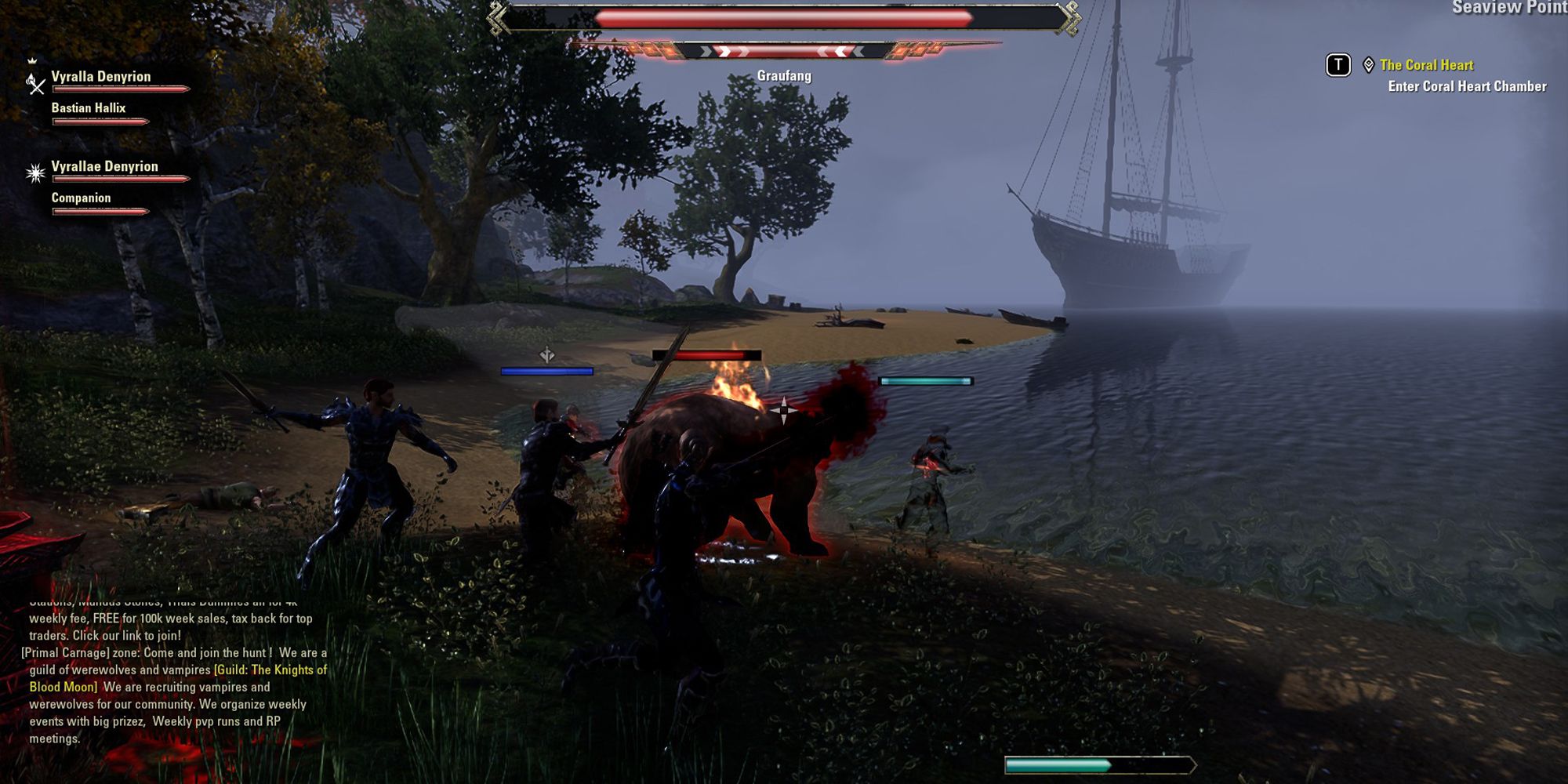 Nestled in its home in Seaview Point, Graufang the brown bear prowls to protect its territory. Indeed, it is a definite disappointment when you're running across the field to the boss arena and find only a brown bear World Boss. Graufang has the basic move set of every other brown bear you have encountered thus far, with the only difference being a larger health pool.

So aside from everything you'd expect a bear to do when attacking – such as lunge, swipe, and bite attacks – there is nothing truly outstanding about Graufang. The only reason, as said before, Graufang is so high up this list is due to its incredible health bar. 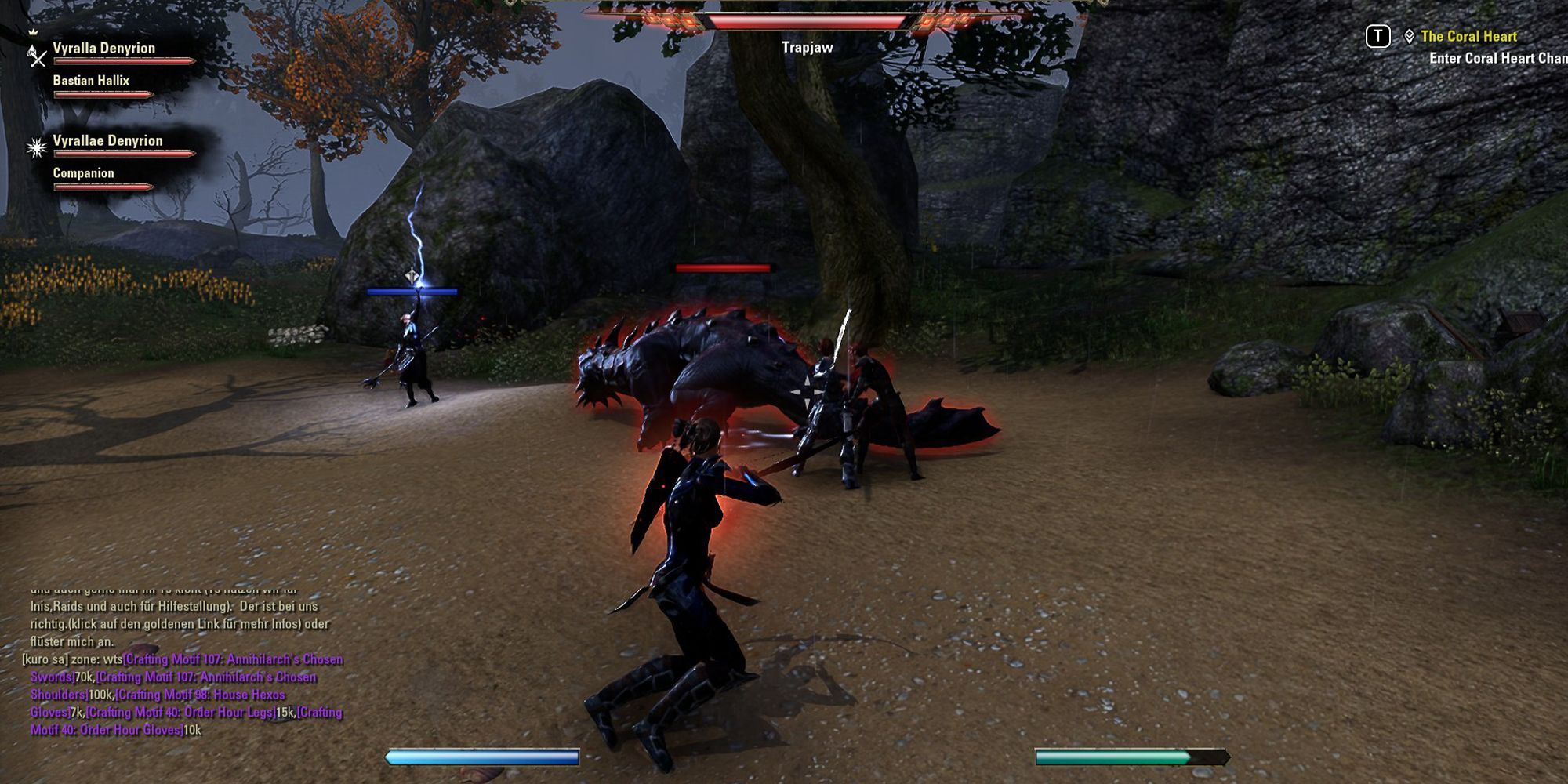 The Trapjaw World Boss is a literal tank, with a seemingly impenetrable shell of hard scales. A wamasu originally from the Argonians' Black Marsh, the Trapjaw has certainly earned its name. This boss is a hard-hitter, using its tail to smash onto the ground and launch debris at you.

The Trapjaw also has the ability to wield electricity attacks, spitting lightning at you from a distance. One of its most devastating attacks is flinging a lightning bolt that can catch and trap you if you did not dodge in time. This boss also has a charge attack that can mow you down, which is indicated by a long red line you can avoid. Althought, at least the Trapjaw fights alone. 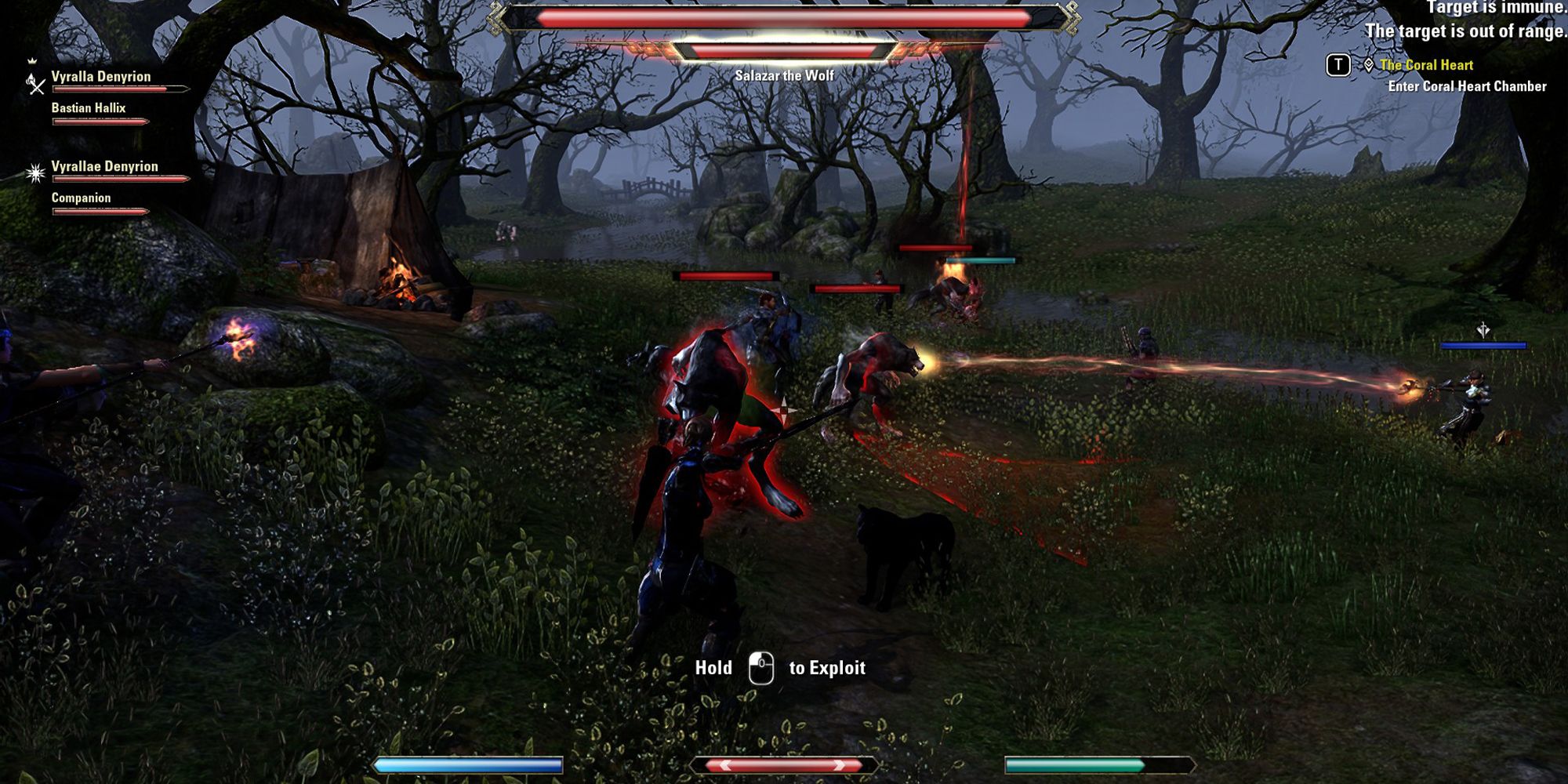 If you have fought the werewolf trio World Boss in Western Skyrim, then fighting another trio at The Wolf's Camp could only cause you to go: "Not again!" Thankfully, these three are normal-sized werewolves, and not giants like the ones in Western Skyrim.

Initially, you will see a camp surrounded by water, with three people sitting around a campfire. But as soon as you charge in, all three will transform into werewolves. This fight is one about numbers, so it is recommended to have at least one other player there with you if you aren't at a sufficient level to tackle all three. These werewolves fight like all werewolves do, swiping, clawing, and biting, but underestimating them would be a sure fire death sentence. 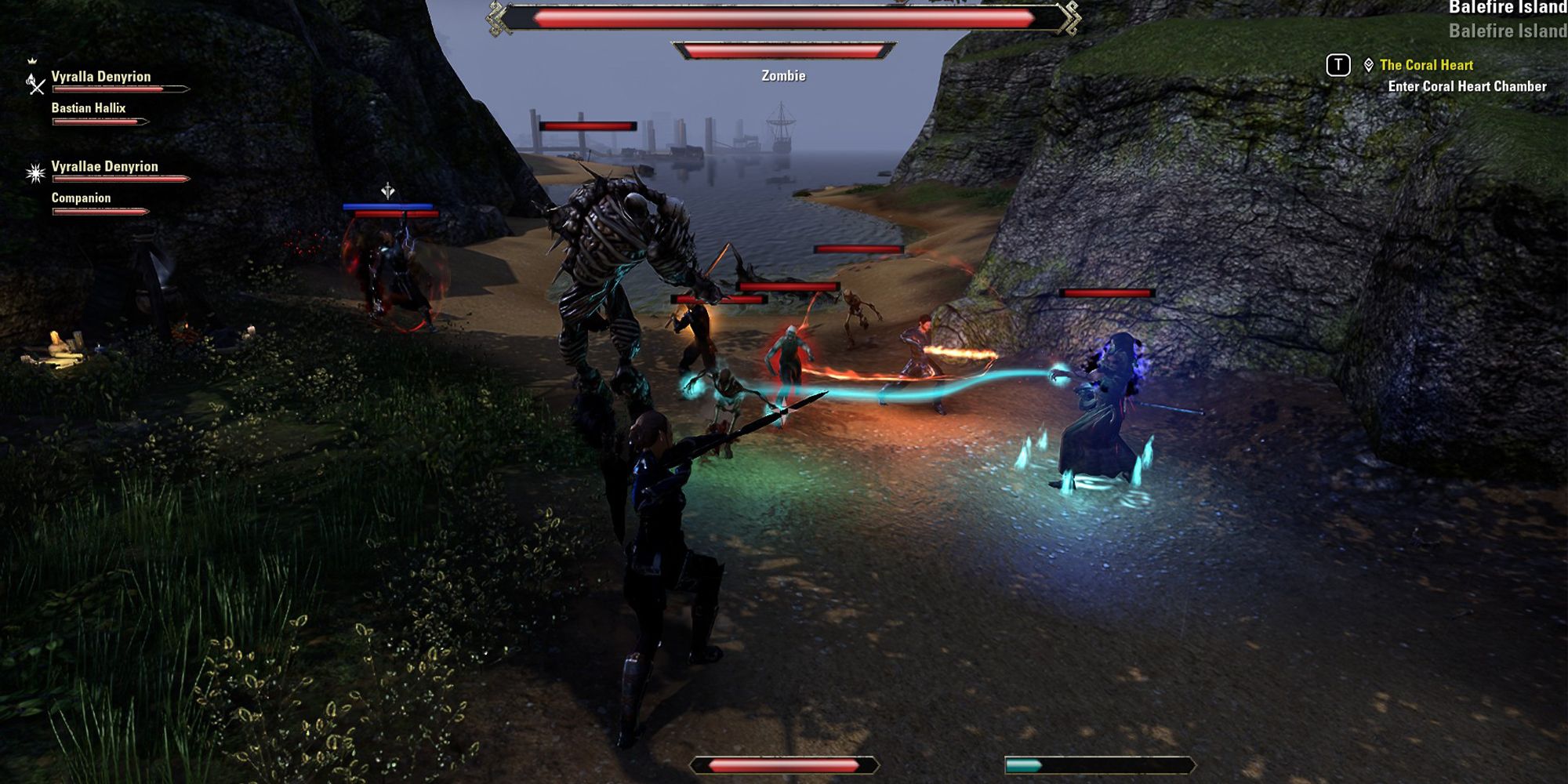 Fighting against necromancers is a tricky issue, akin to battling against Game of Thrones' The Night King. Grivier Bloodcaller in Balefire Island epitomizes the latter, as he immediately summons the second boss, Grivier's Monstrosity. This hulking giant of a skeleton looms large and hits hard. What's worse, Grivier also summons a group of zombies to back them up.

Grivier can boost his skeleton monster throughout the fight, which you can stop by slamming him with your weapon. It's recommended to kill Grivier Bloodcaller first, before dealing with the Monstrosity. Yes, killing its master doesn't mean it'll wither away. In fact, it's time to break a few bones.