You are here:
Home / Elden Ring: How To Defeat Hoarah Loux, Warrior

Hoarah Loux, Warrior, is the second phase of the fight with Godfrey, the First Elden Lord in Elden Ring. After arriving in Leyndell, Ashen Capital, and defeating Sir Gideon Ofnir, The All-Knowing, you will have to face Godfrey and his true form before approaching the blazing Erdtree.

The fight with Godfrey is rather difficult, as the boss is one of the last bosses in the game. Almost all of his attacks have high damage output, so dodging all of them is vital. Make sure to bring friends or summons, as you will need their help. Here is all you need to know about Hoarah Loux, Warrior. 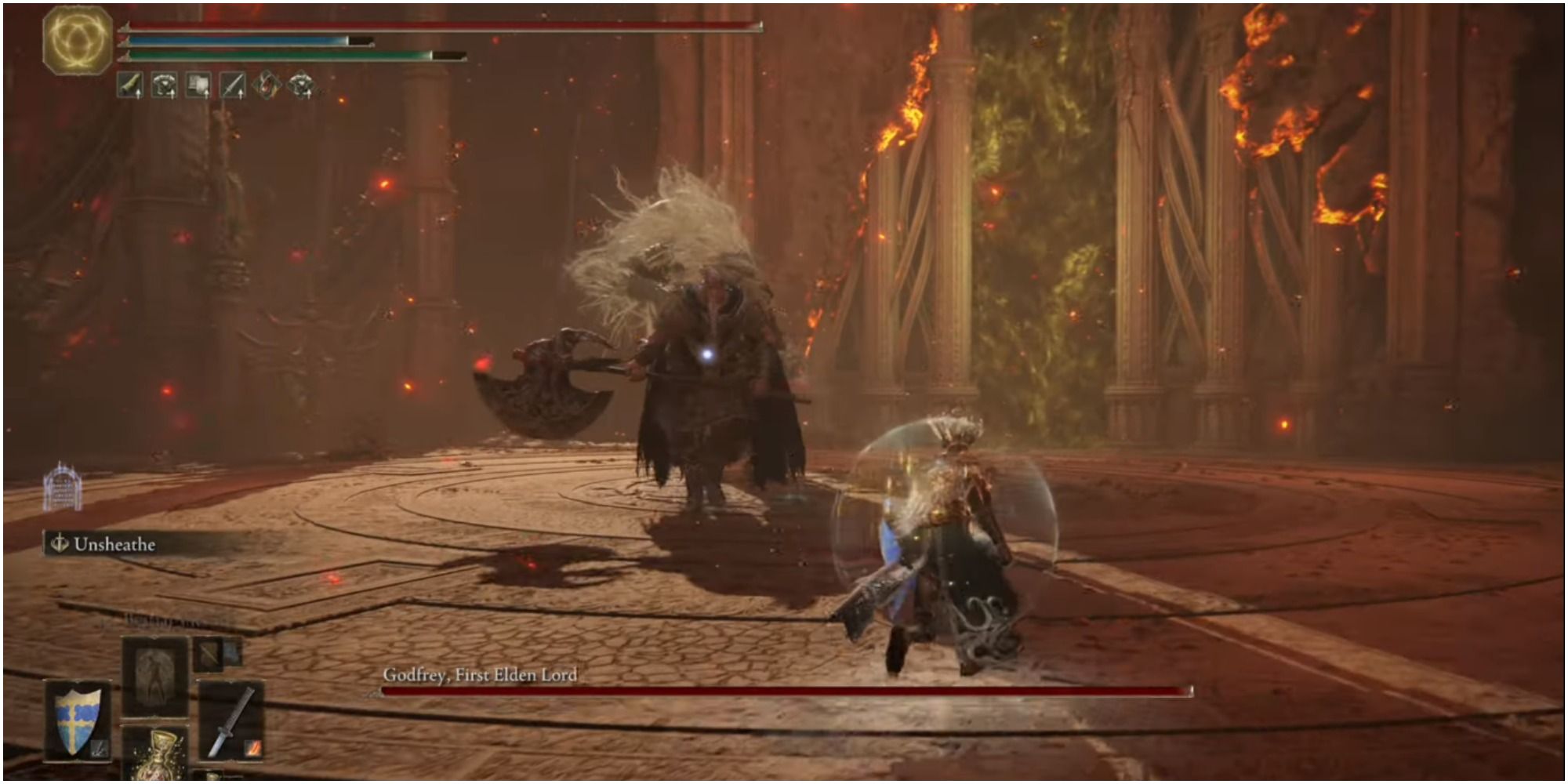 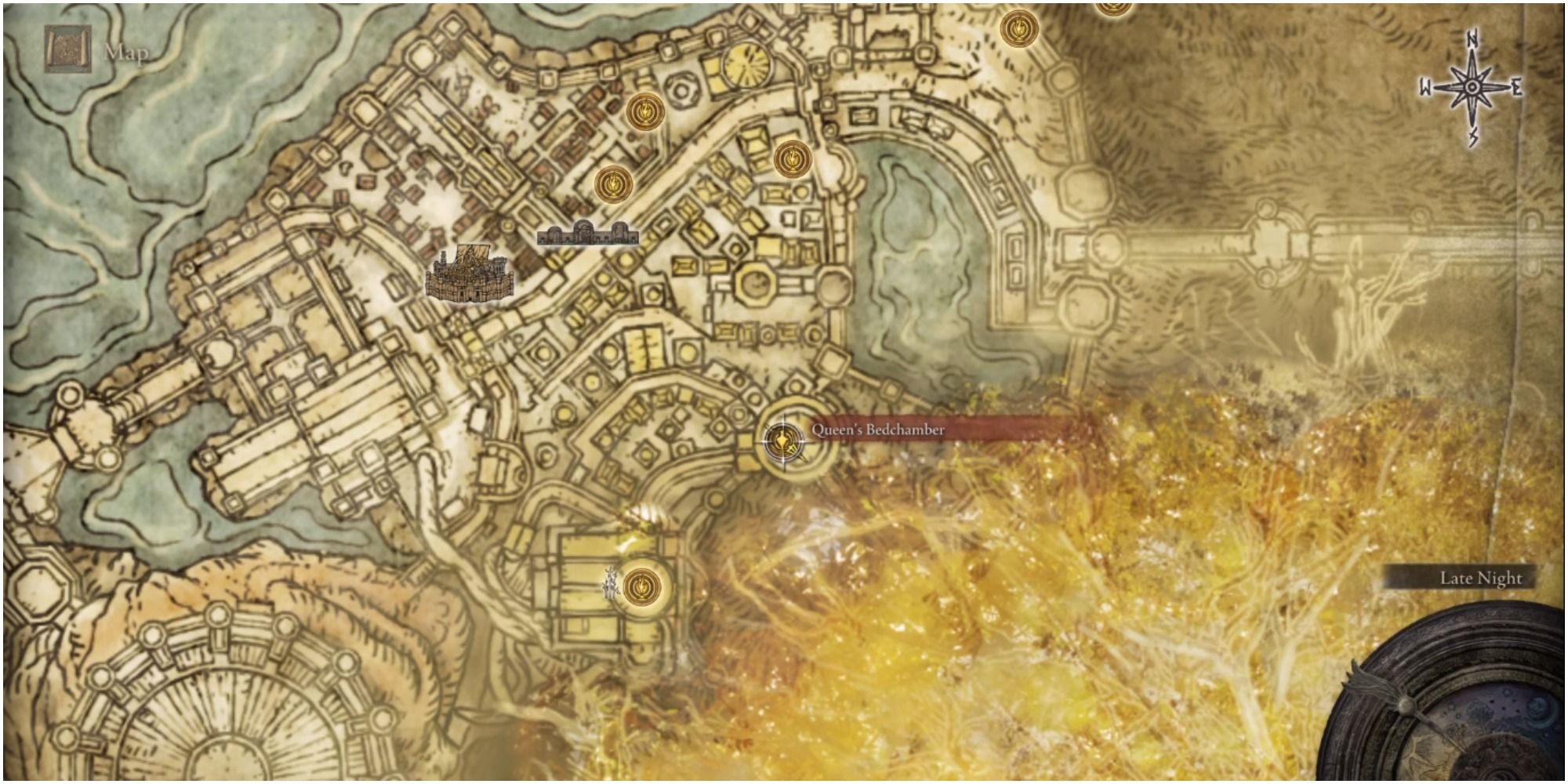 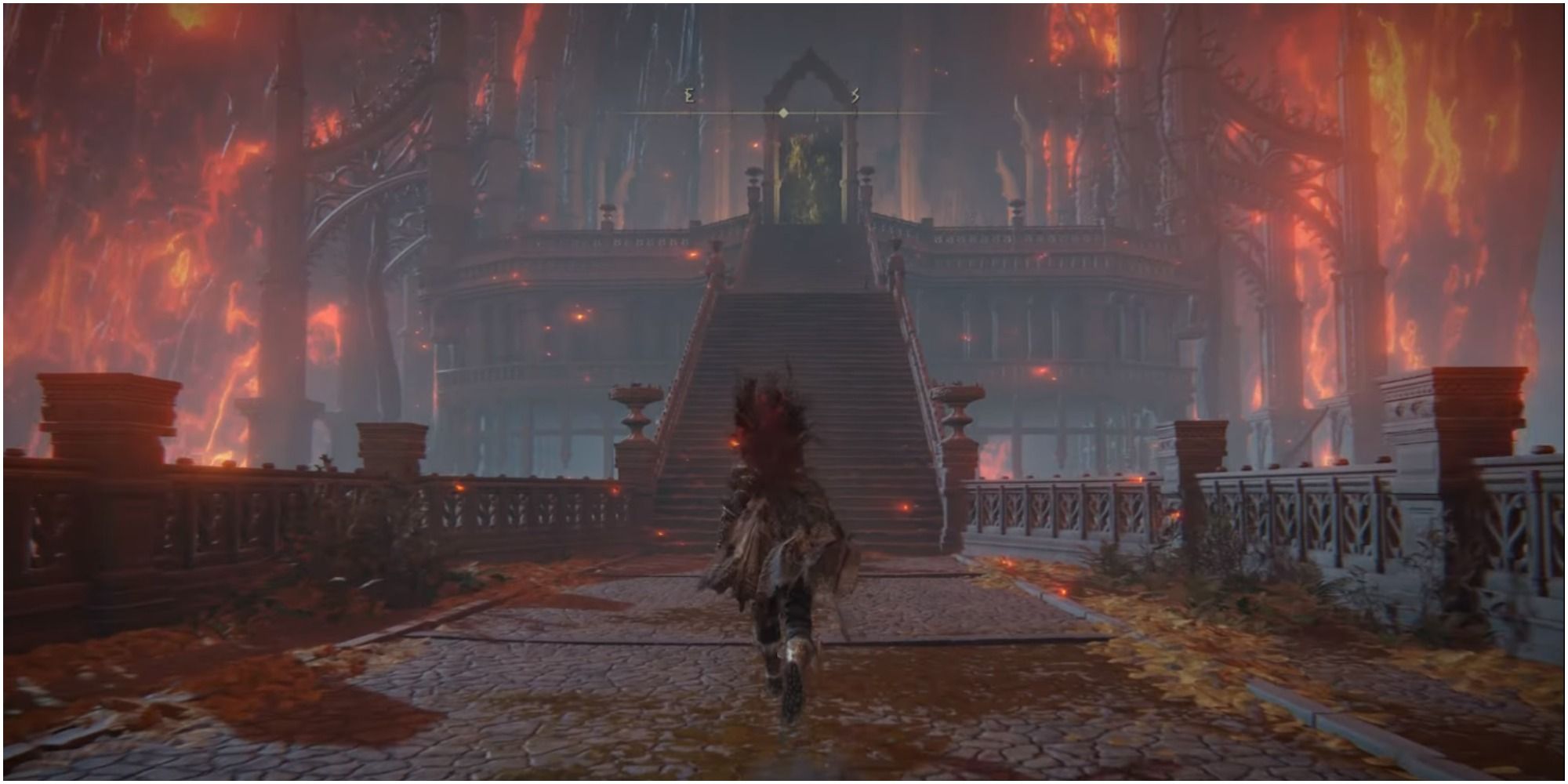 Hoarah Loux is located in Leyndell, Ashen Capital, in the same arena as Morgott, The Omen King. The nearest Site of Grace is the Queen's Bedchamber. The fight is mandatory before facing the final boss, and to complete any ending. Apart from online players and Spirit Ashes, you can summon NPCs such as Nepheli Loux if you have progressed her questline. You can also summon Shabriri if you have been imbued with the Frenzied Flame by the Three Fingers.

Defeating this boss will get you 300,000 Runes and the its Remembrance. You can hand this to Finger Reader Enia in Roundtable Hold in exchange for the Axe of Godfrey (Colossal Weapon) or Hoarah Loux's Earthshaker (Ash of War). 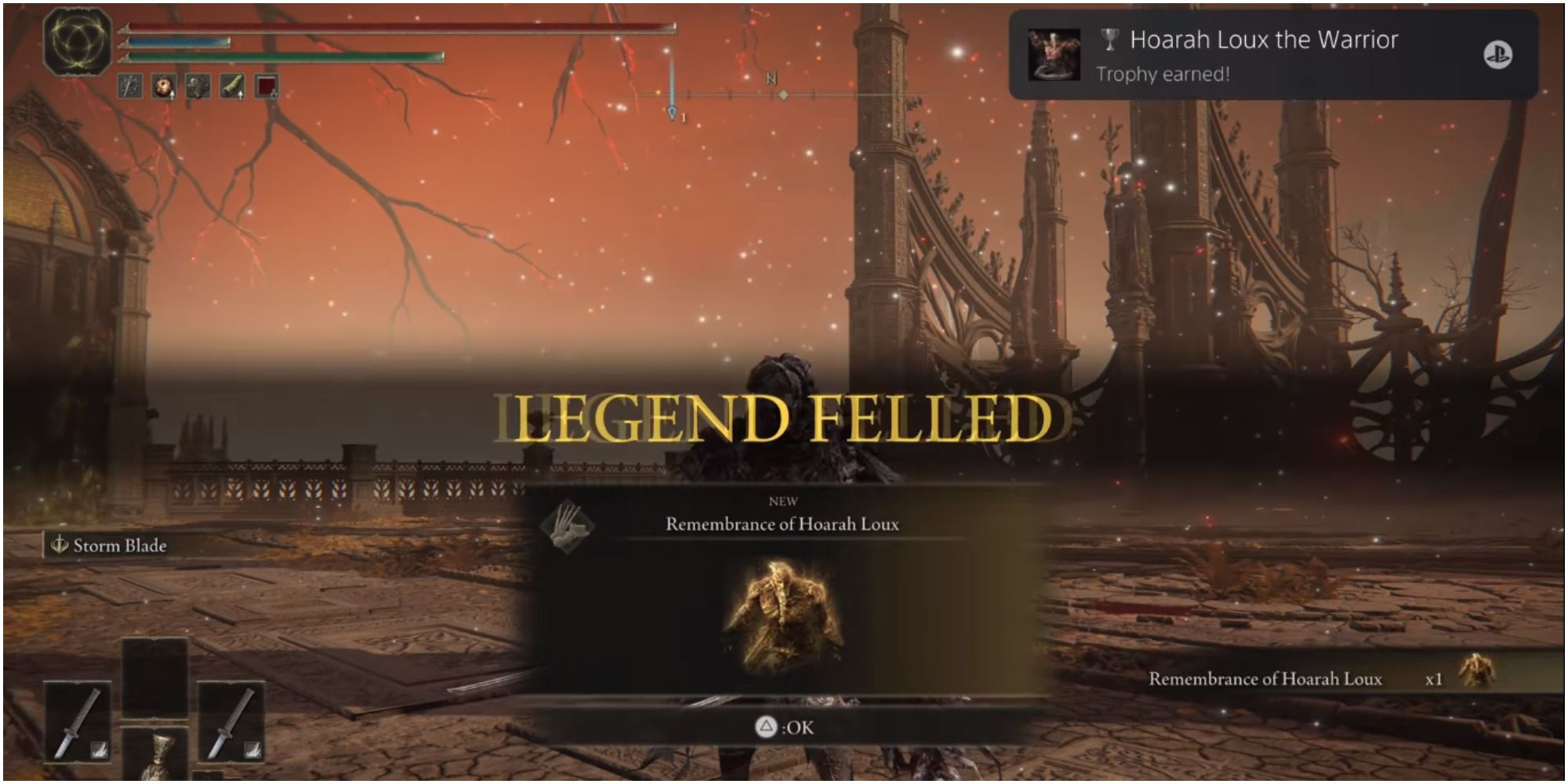 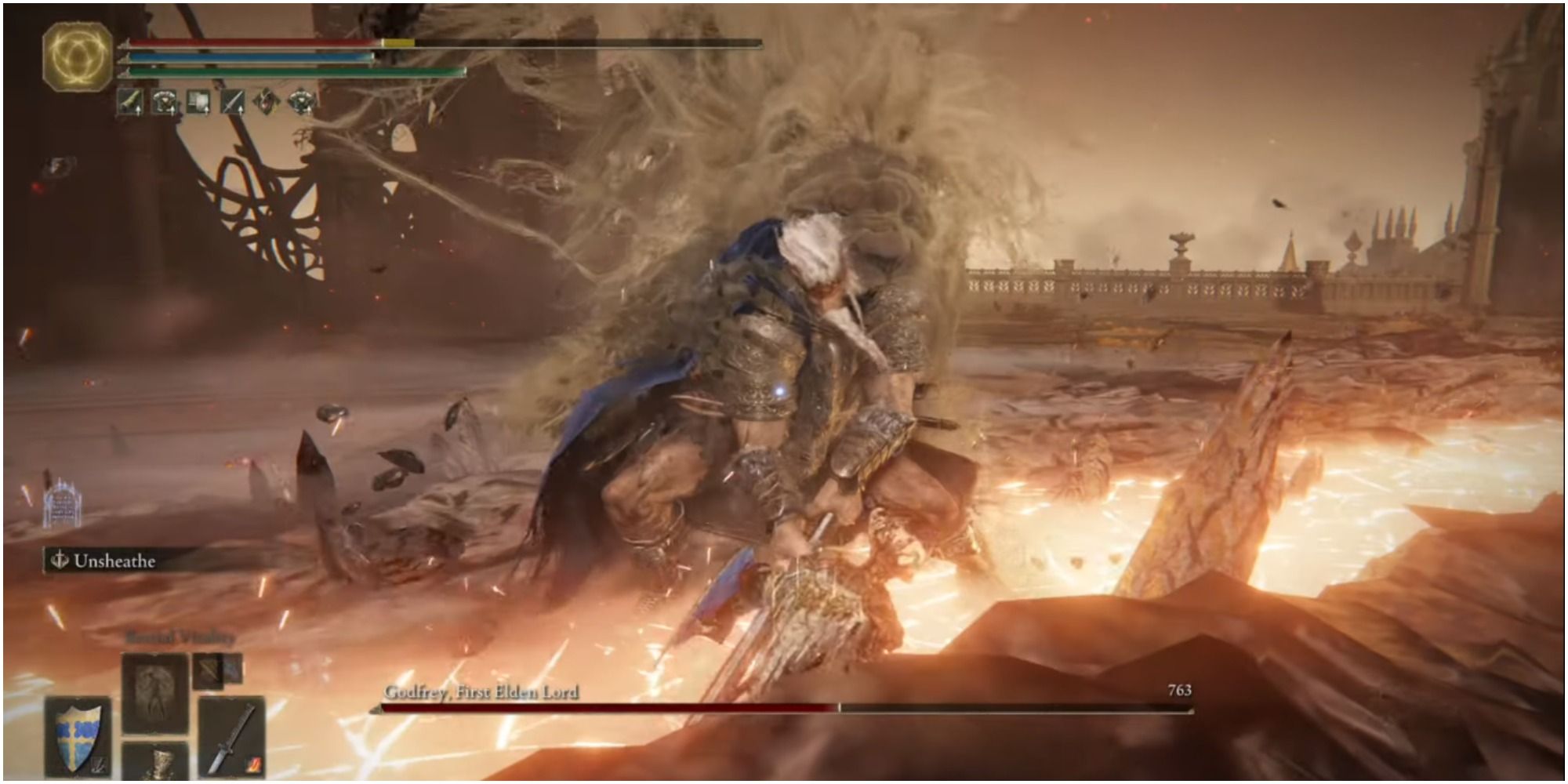 Godfrey has two phases, with a variety of regular and AoE attacks. His second phase, in the Hoarah Loux form, revolves mainly around grabs and the need for precise dodging as one grab can deal a lot of damage. 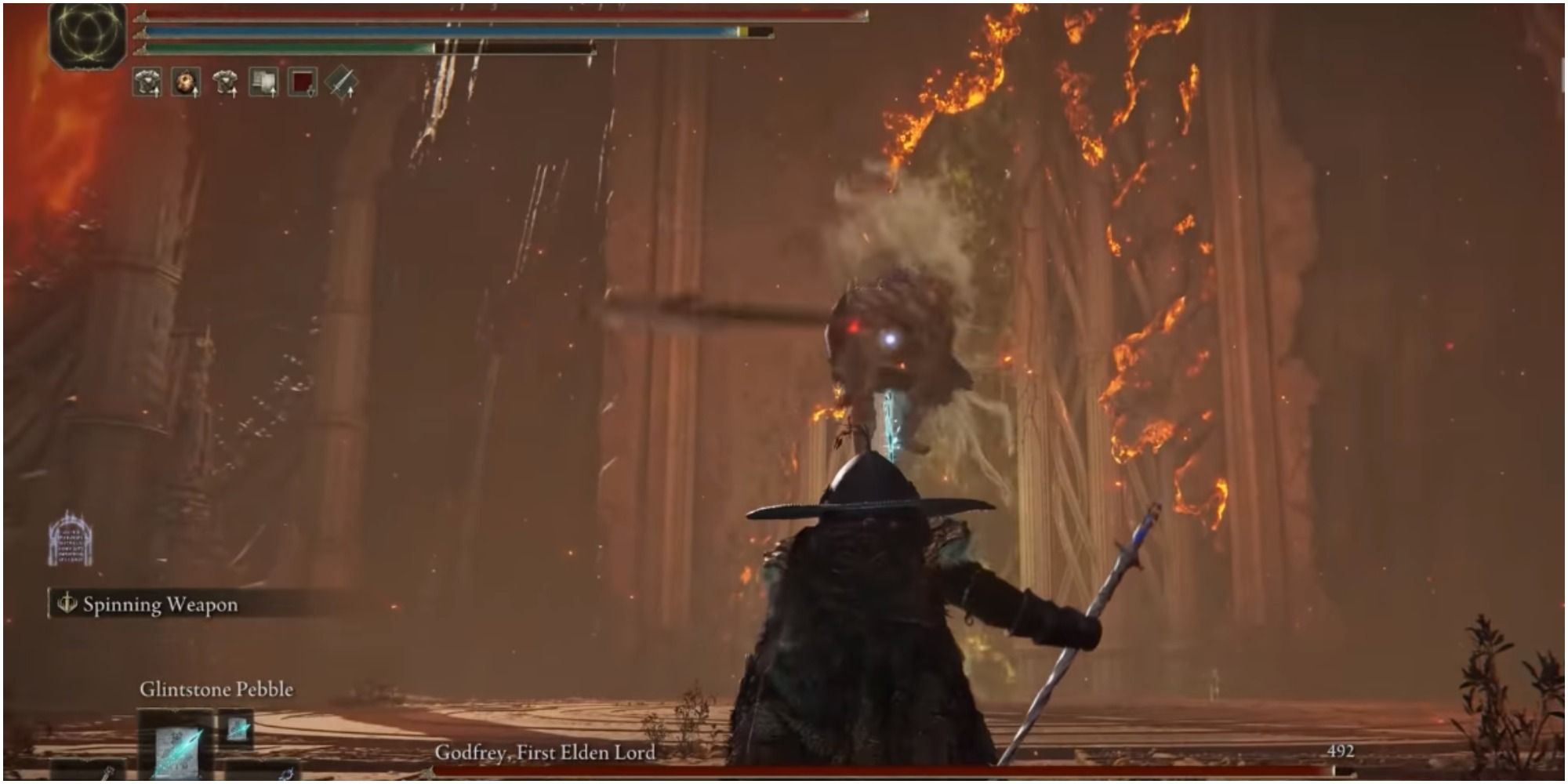 As soon as the fight begins, Godfrey can periodically jump up and throw his axe at you.

Counter: The attack has a slow cast time, making dodging to either side easy. 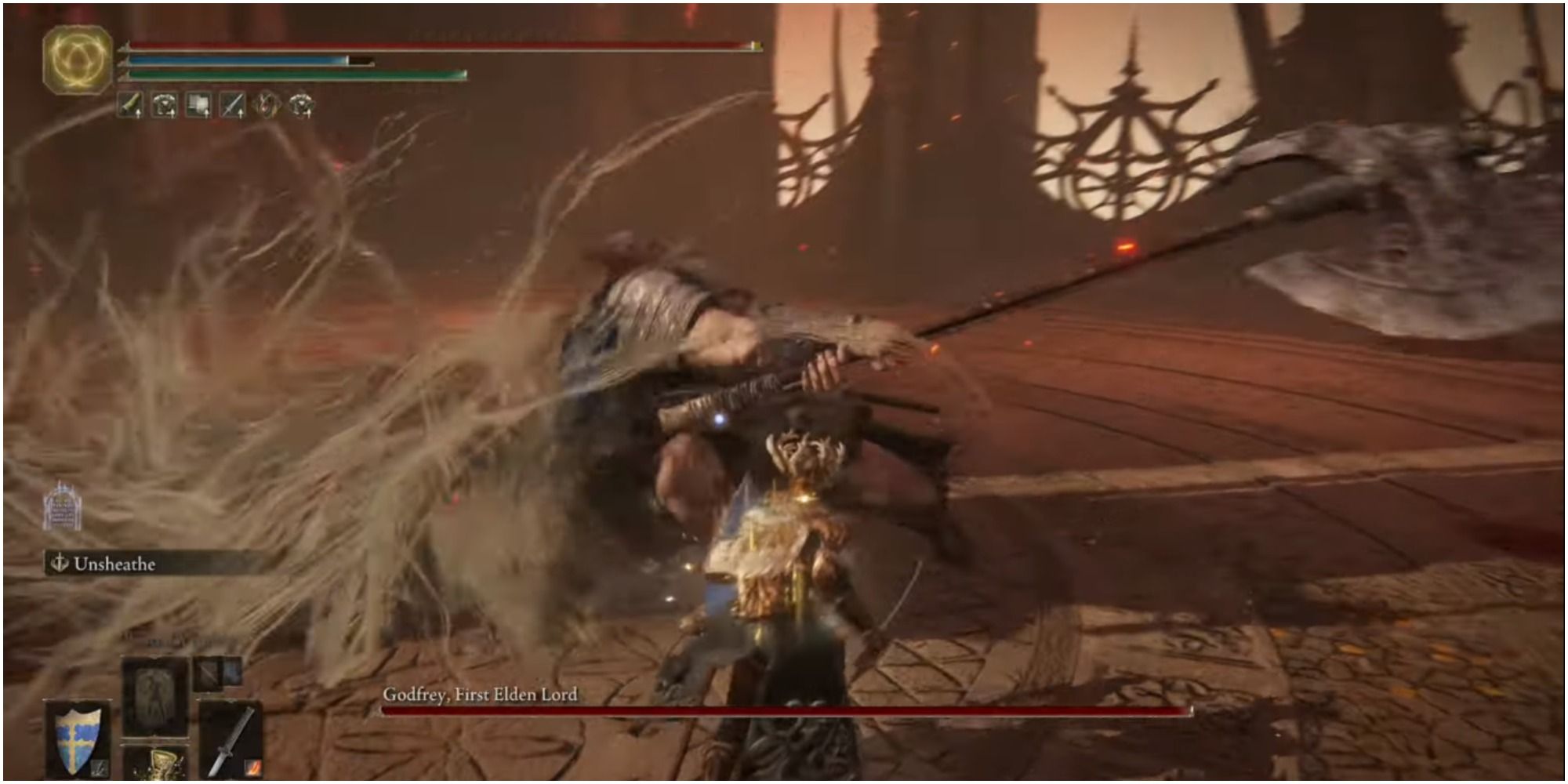 The boss uses his axe to perform diagonal swipes multiple times. These swipes can be followed up by Earthquake Stomp or an overhead slash.

Counter: Dodge to the side the attack is coming from. Do this multiple times for every attack the boss does. 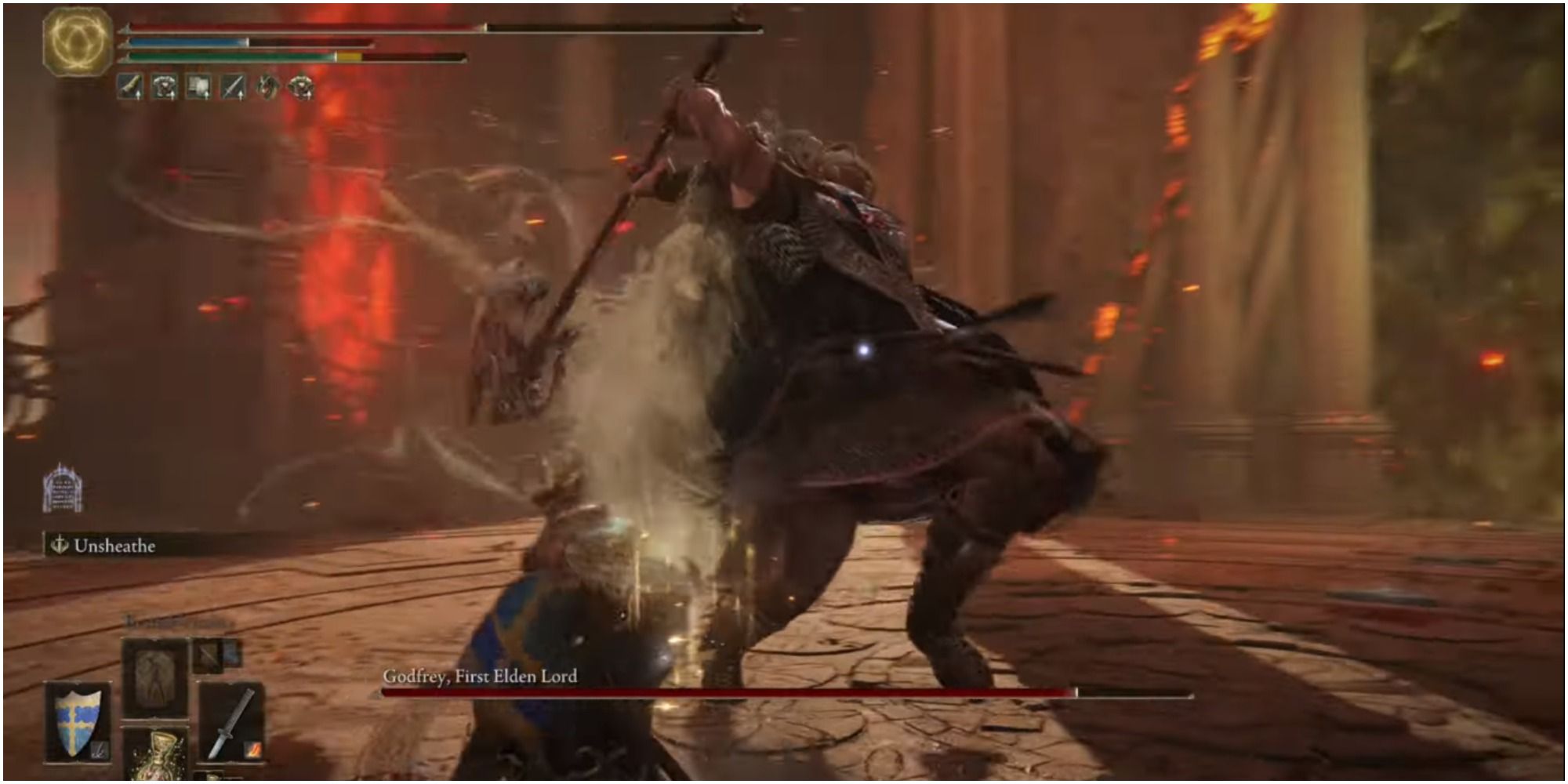 Godfrey spins his axe above his head and then slams it down on the ground.

Counter: The attack is good at tracking you, so you need to keep moving and dodge to the side as he is about to slam it down. 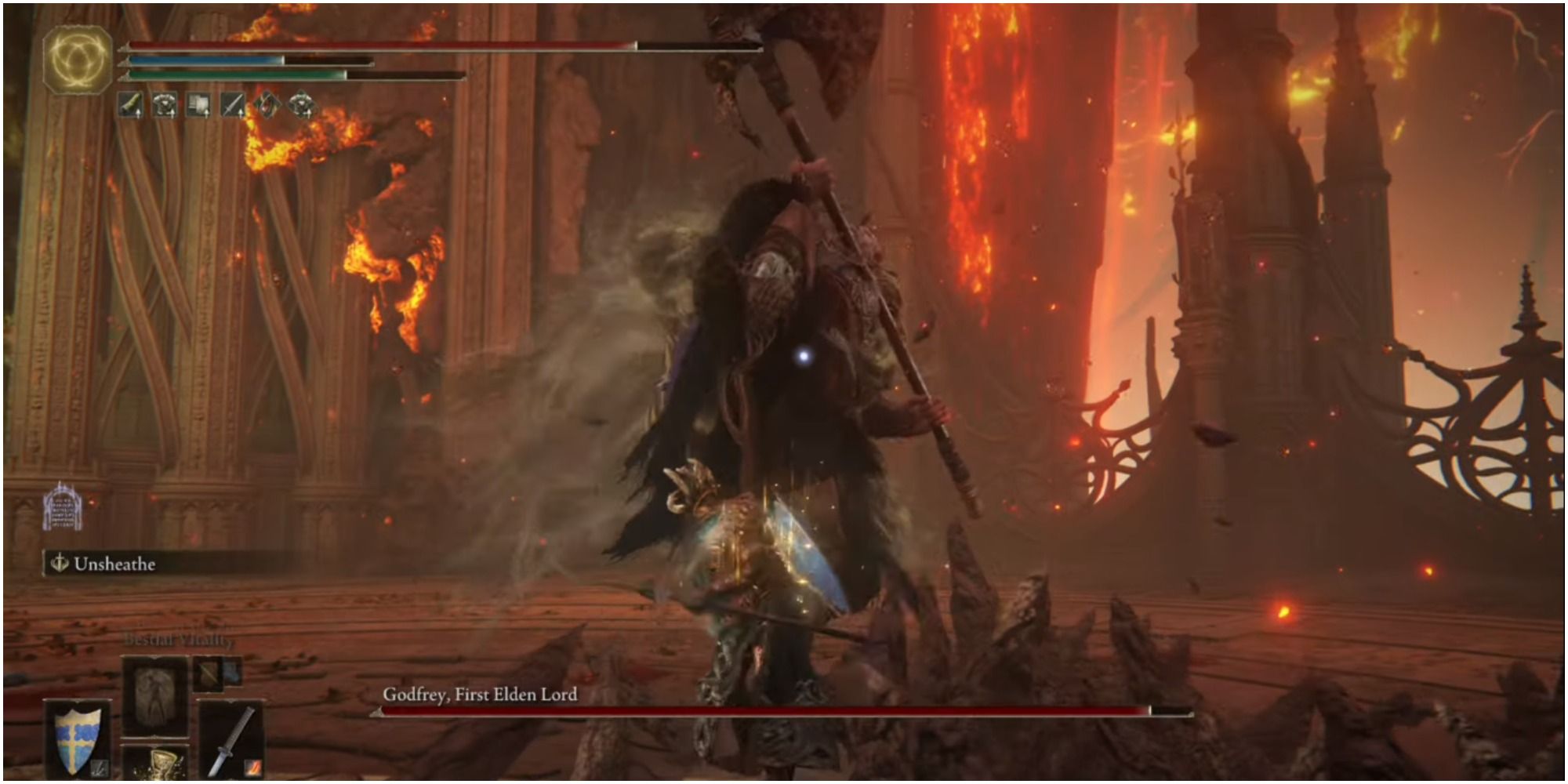 The boss stomps the ground with one leg, causing a minor earthquake and rock spikes to form on the ground.

Counter: Dodge to either side as he is about to stomp the ground. Jumping is also a reliable option, but be wary of any follow-ups the boss might perform afterwards. 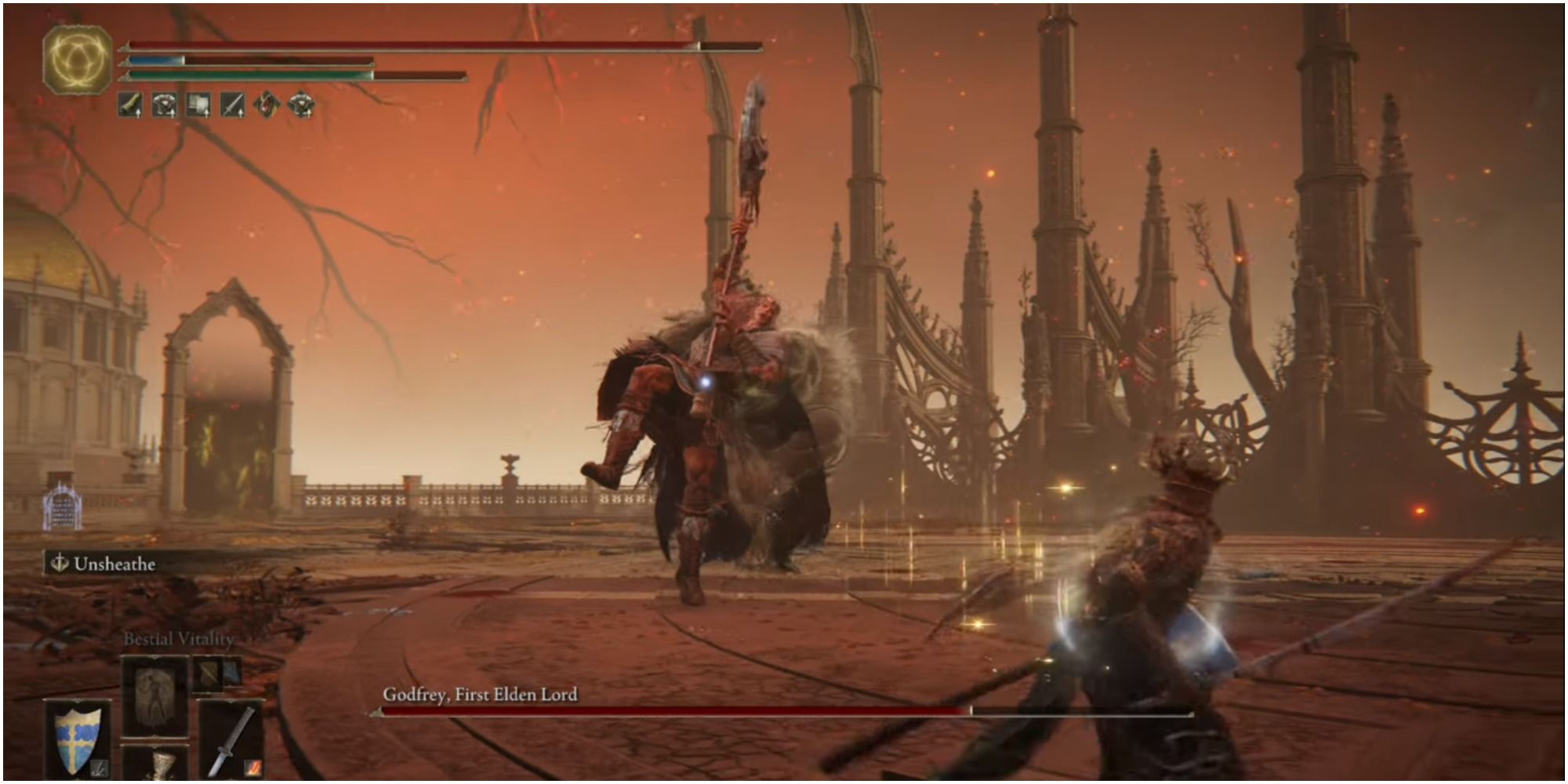 Godfrey raises his foot and roars, slamming it down and creating a shockwave that covers almost the entire arena. He can stomp multiple times, but one stomp deals a small amount of damage.

Counter: You can roll forward as the stomp comes, in order to avoid it. This attack has tricky dodge timings, so you'll just need to get used to it. You can jump above the shockwaves if timed correctly.

The boss buries his axe into the ground to create a trail and make the ground break.

Counter: As soon as you see him bury his axe, disengage your lock on him and run away from the area to avoid it. The dodge timing on this attack is pretty rough. 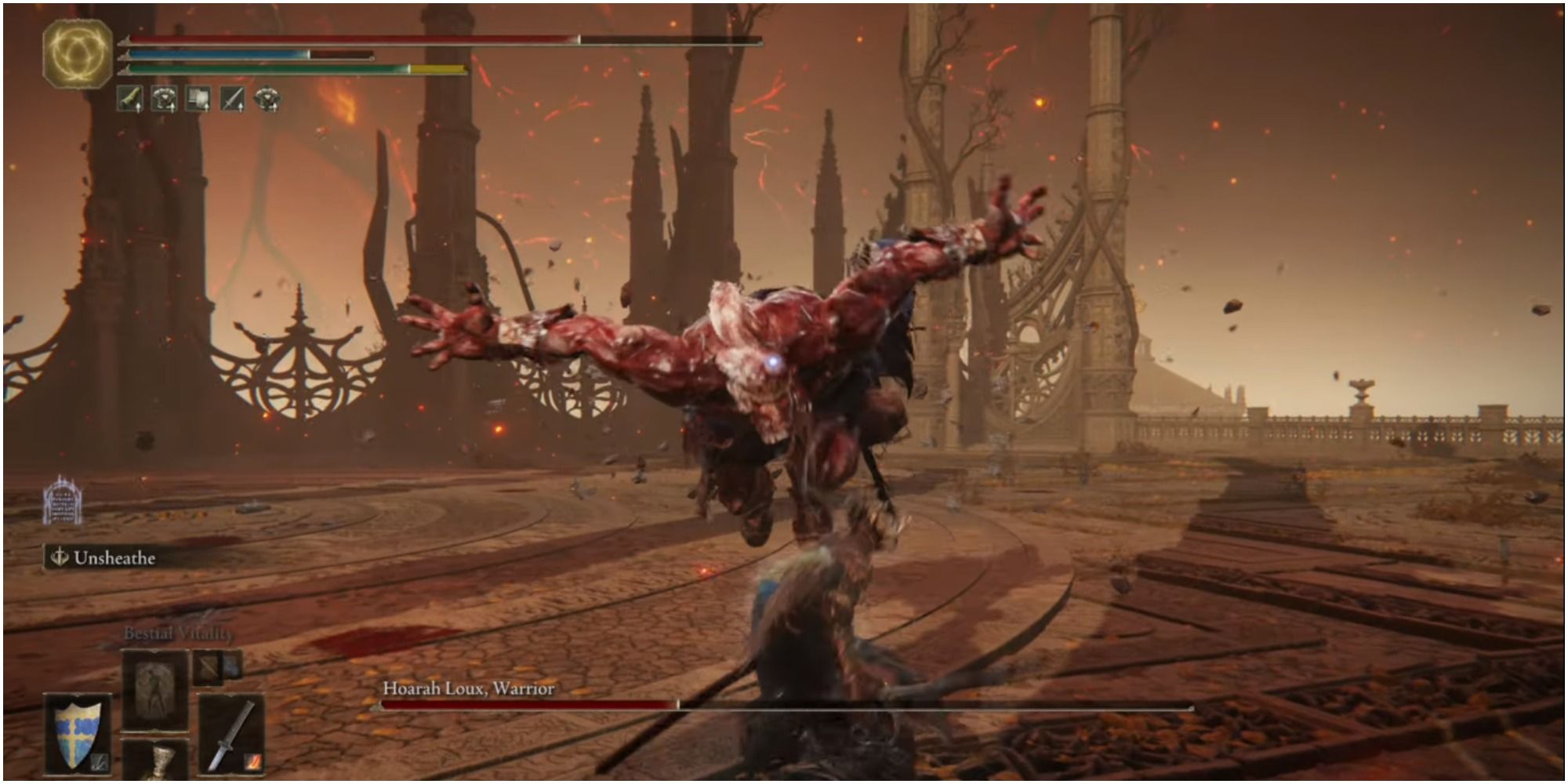 Hoarah Loux pulls both arms back and leaps into you, and tries to grab you. If successful, he takes you up in the air and slams you down on the ground.

Counter: Roll back as soon as the boss moves his arms forward to grab you. 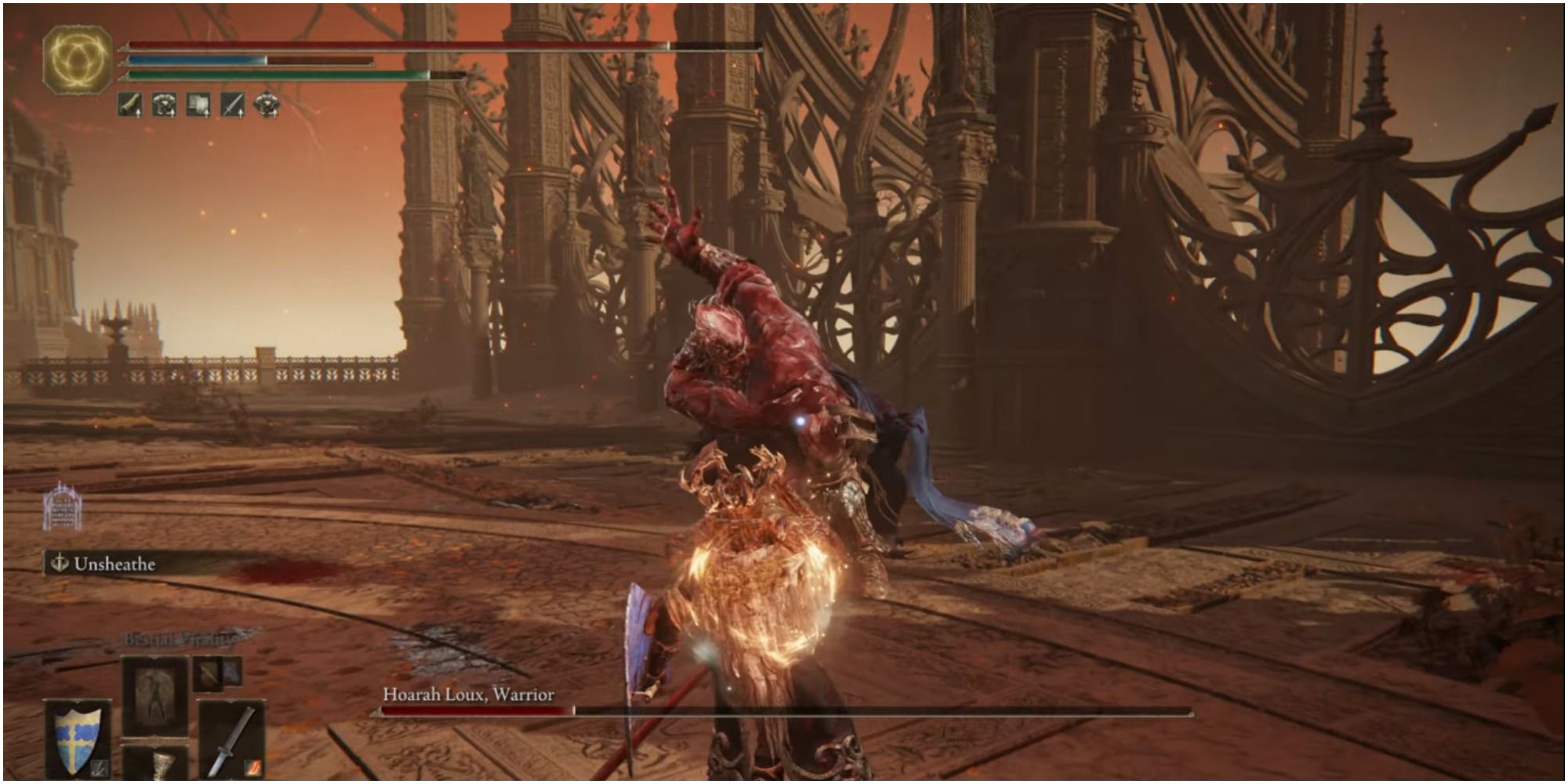 The boss puts his hand on his other arm and rushes in to grab you by the throat. If successful, he will grab you for a second, before throwing you to the ground.

Counter: The animation of this attack is quite slow, giving you time to roll back as the boss comes forward. 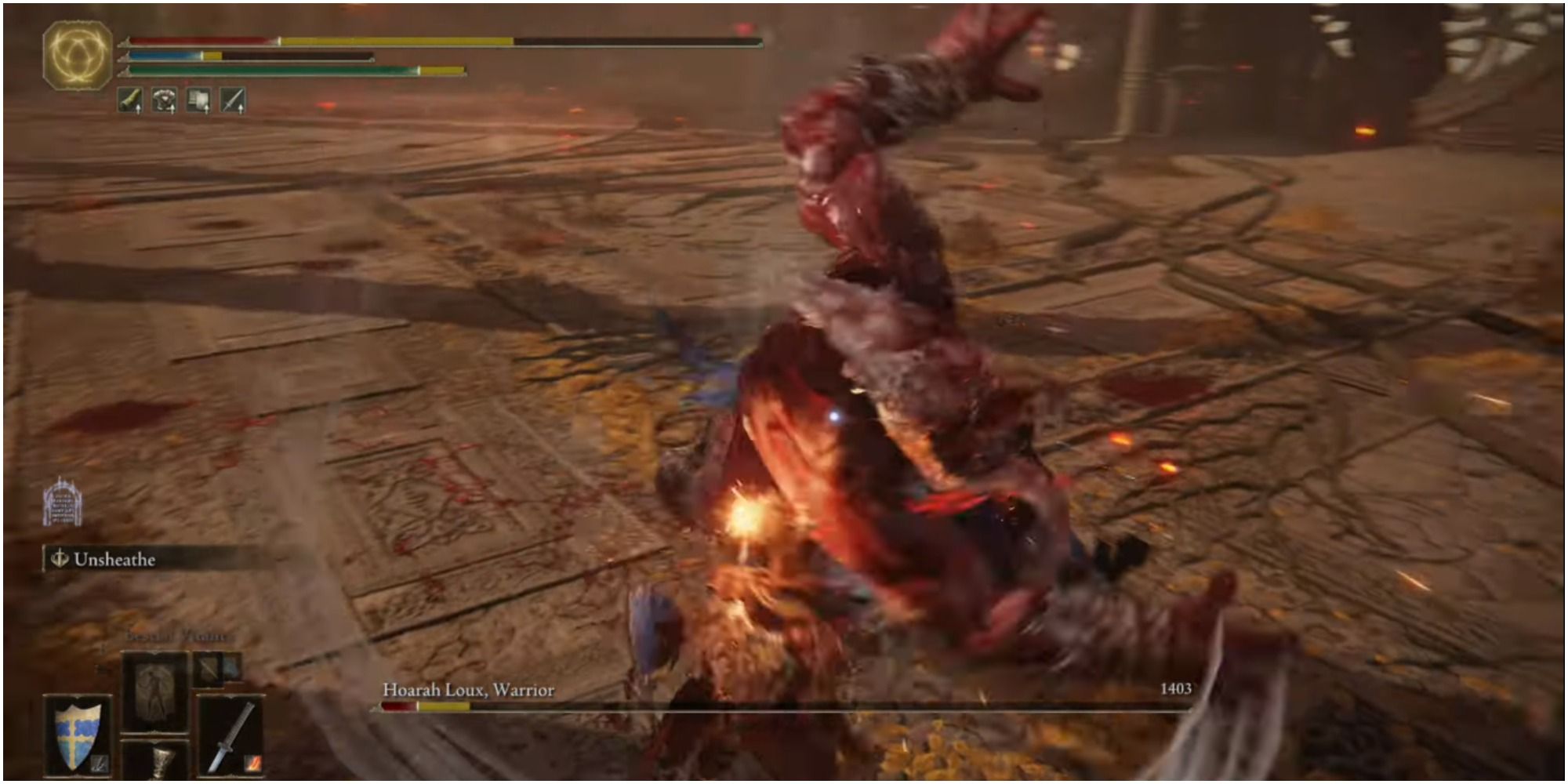 Hoarah Loux starts striking you with his tiger swipes. He can delay the swipes, making it harder to roll on command. He can follow up these attacks with Chokeslam.

Counter: You can dodge these to the side or roll back on every swipe, but be mindful of the delayed attacks as they can catch you off guard. 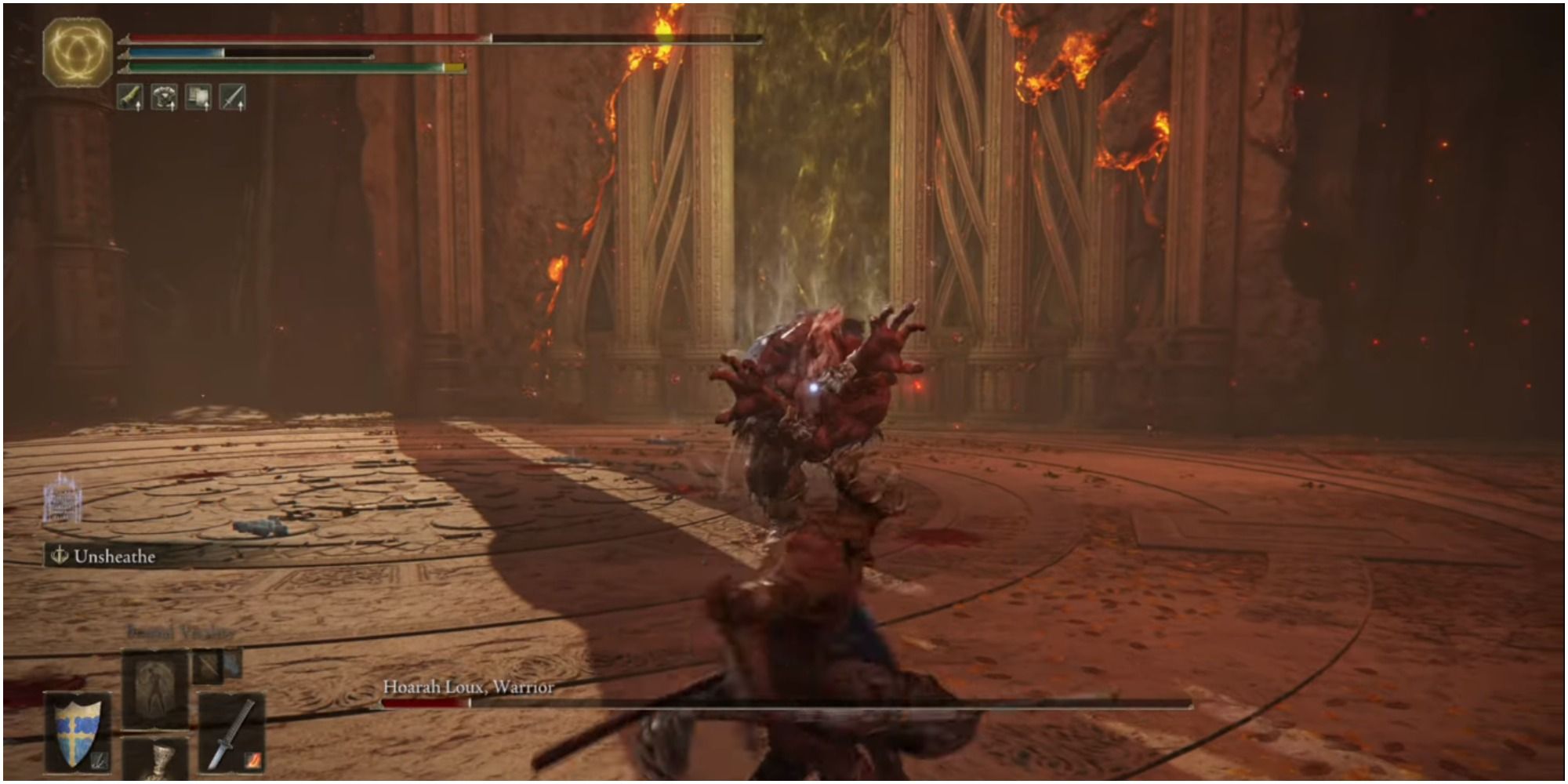 The boss crosses his arms and leaps in to swipe. If successful, the boss will take you up in the air before dropping you down.

Counter: Dodging this to the side is the only reliable option. As soon as the boss is about to swipe, roll to either side. 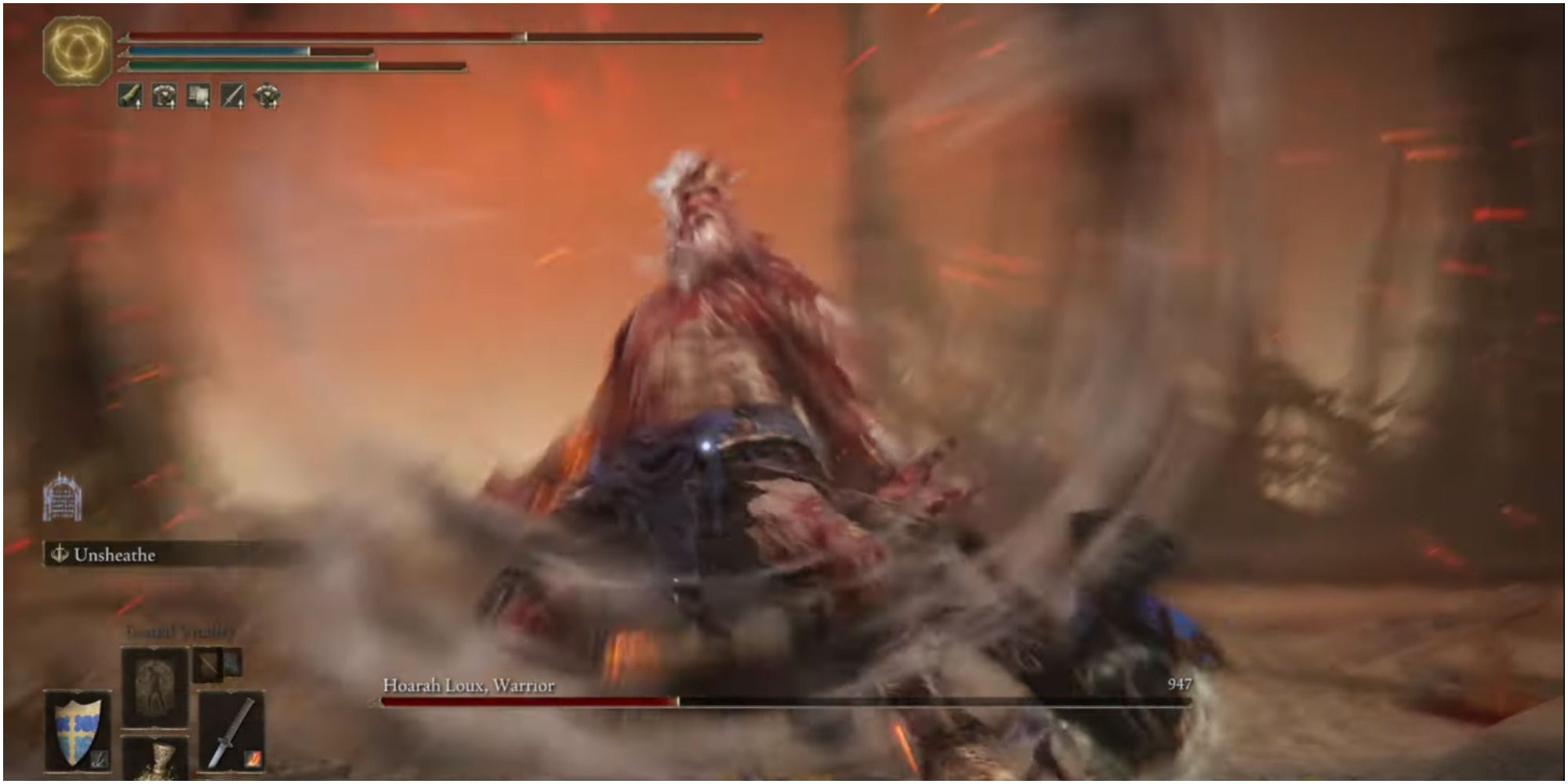 Occasionally after a few attacks, Hoarah Loux will roar like a tiger and knock down the player. He usually does this at close range. This attack does not deal damage. 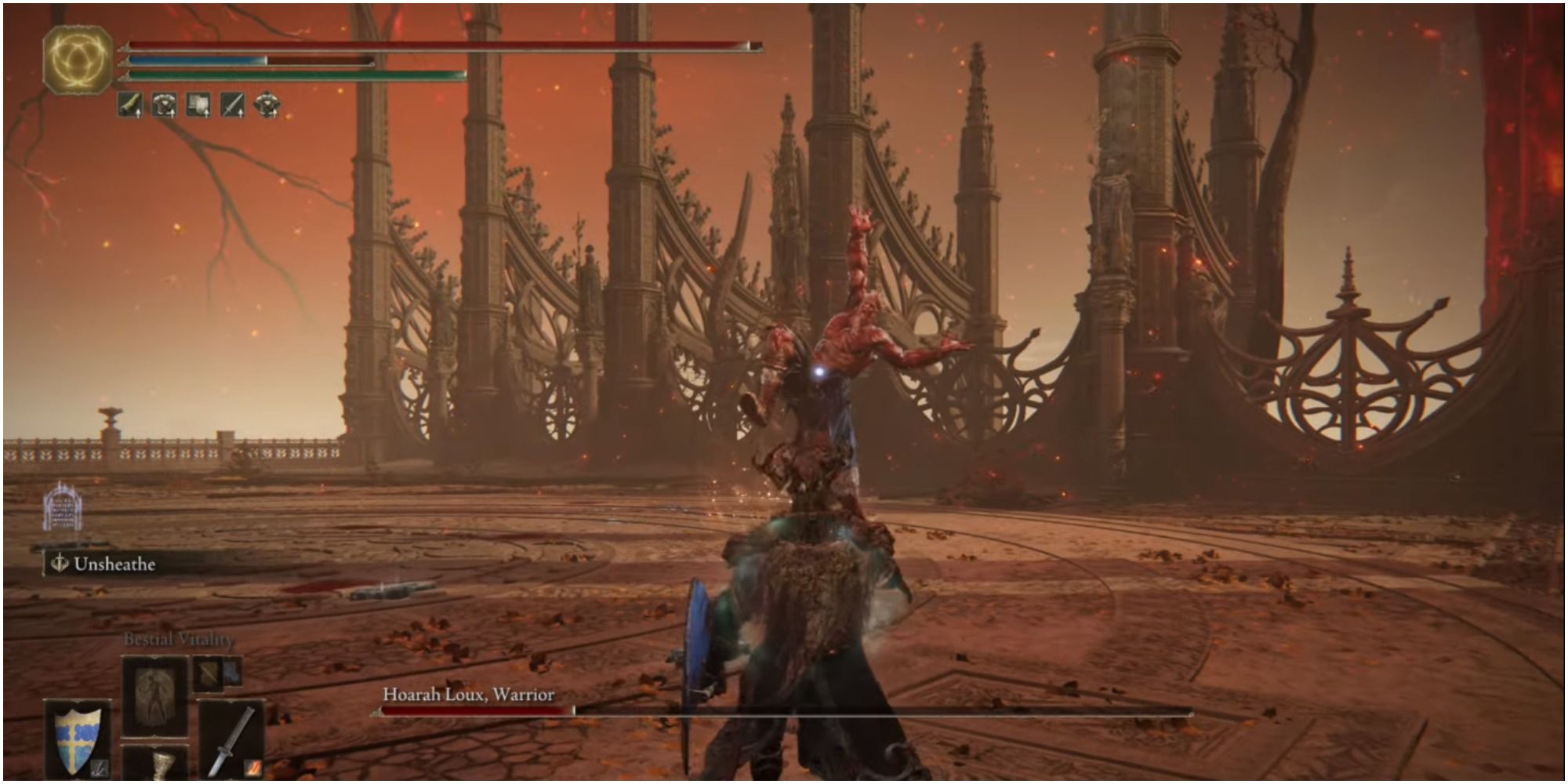 The boss raises his foot and stomps to cause a shockwave. He does this two times, and covers almost all of the arena.

Counter: You can roll forward as the stomp comes out to avoid it. You can jump above the shockwaves if timed correctly. 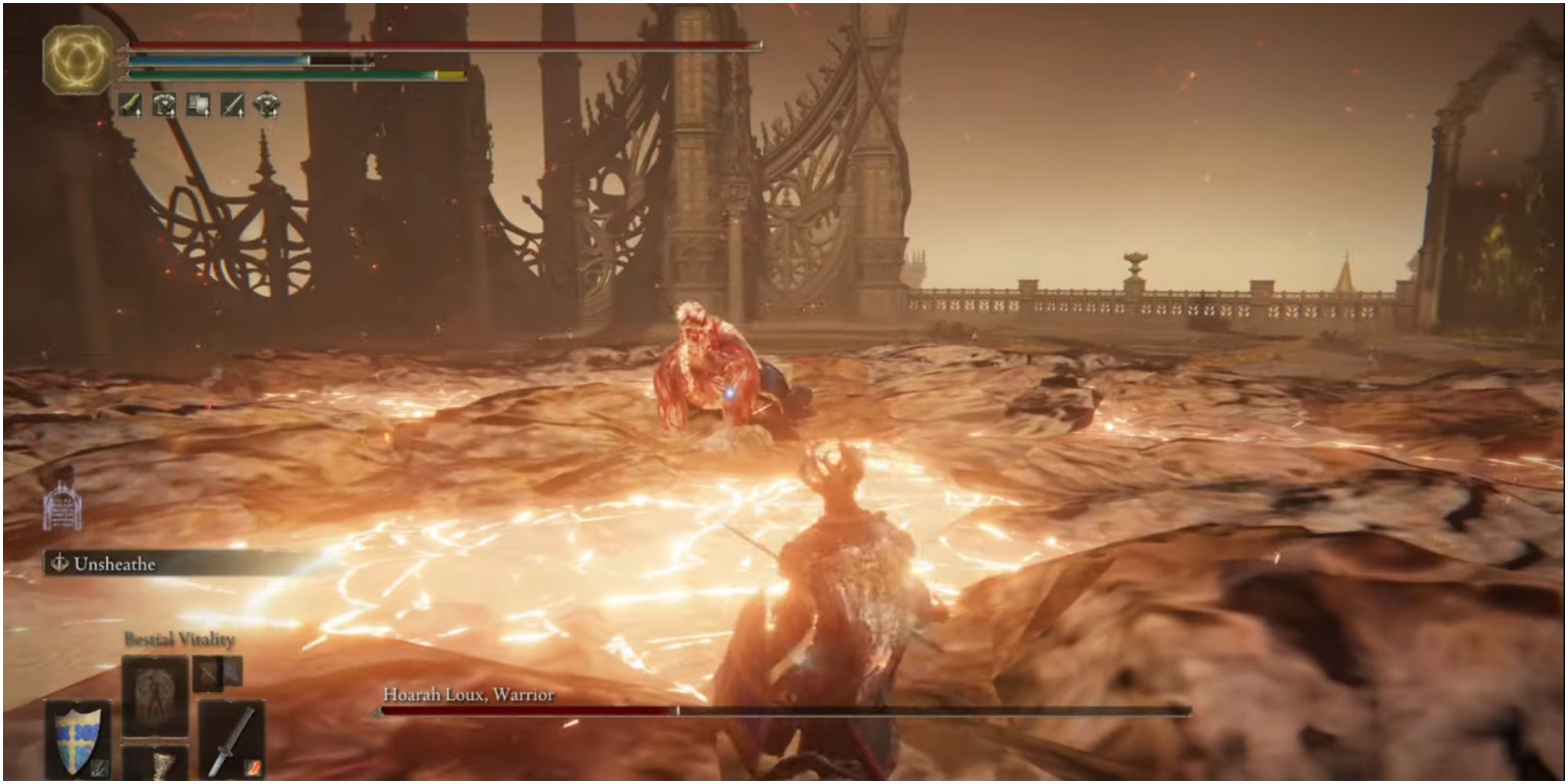 Hoarah Loux leaps into the air and slams the ground. He then lifts a large portion of the arena, causing a massive earthquake that emits fire. This attack can take out your entire health bar.

Counter: As soon as you dodge the slam, remove your target lock and either run or roll away as far as you can from the boss. The attack has a wide radius. 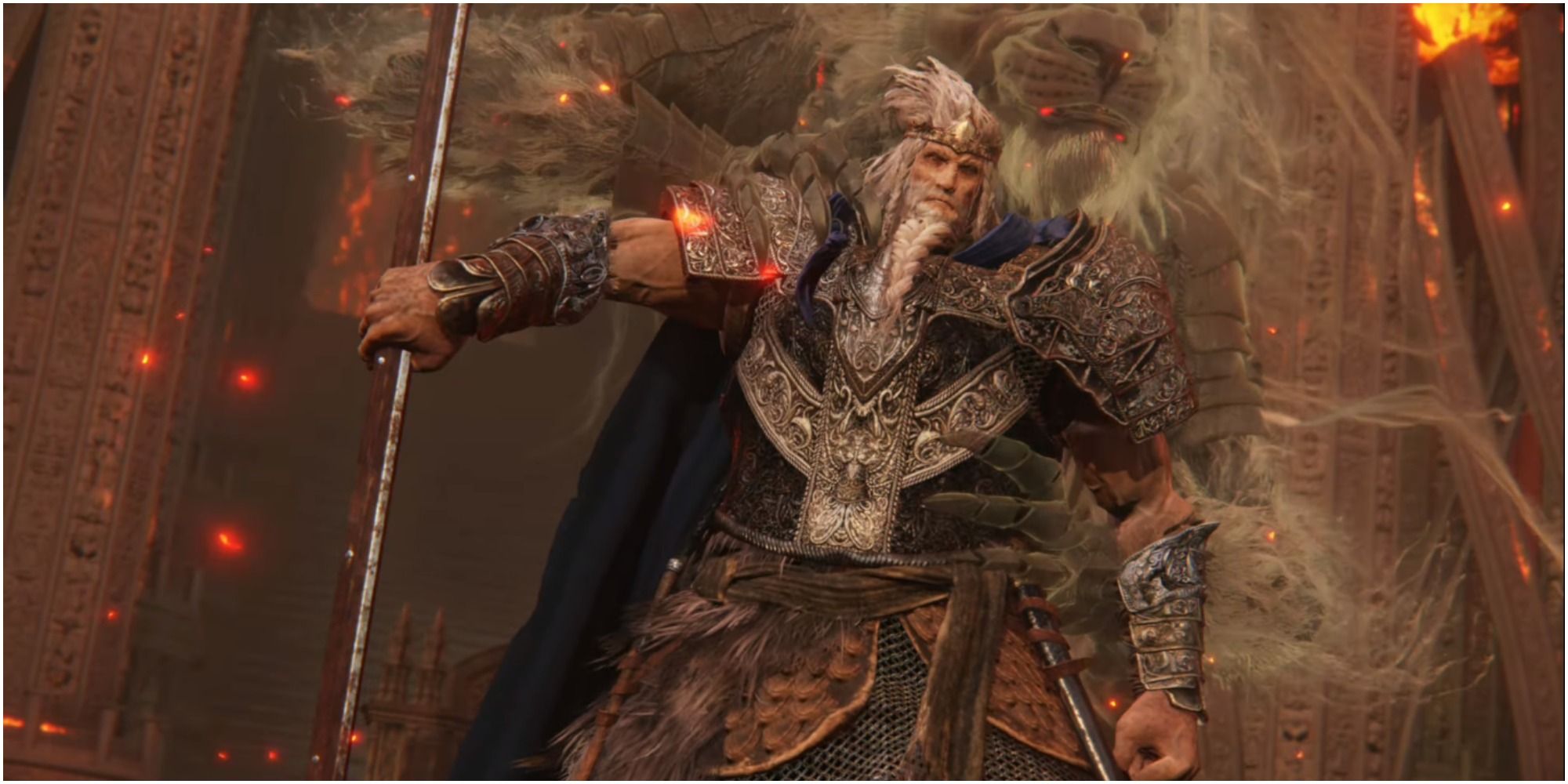 Godfrey has two phases, both of which are entirely different from one another. In the first phase, he takes a slower approach and focuses on dealing damage through his axe combos and leg stomps. In the second phase, Hoarah dashes into range constantly to perform countless grabs and tiger strikes.

There are two main strategies for this fight: 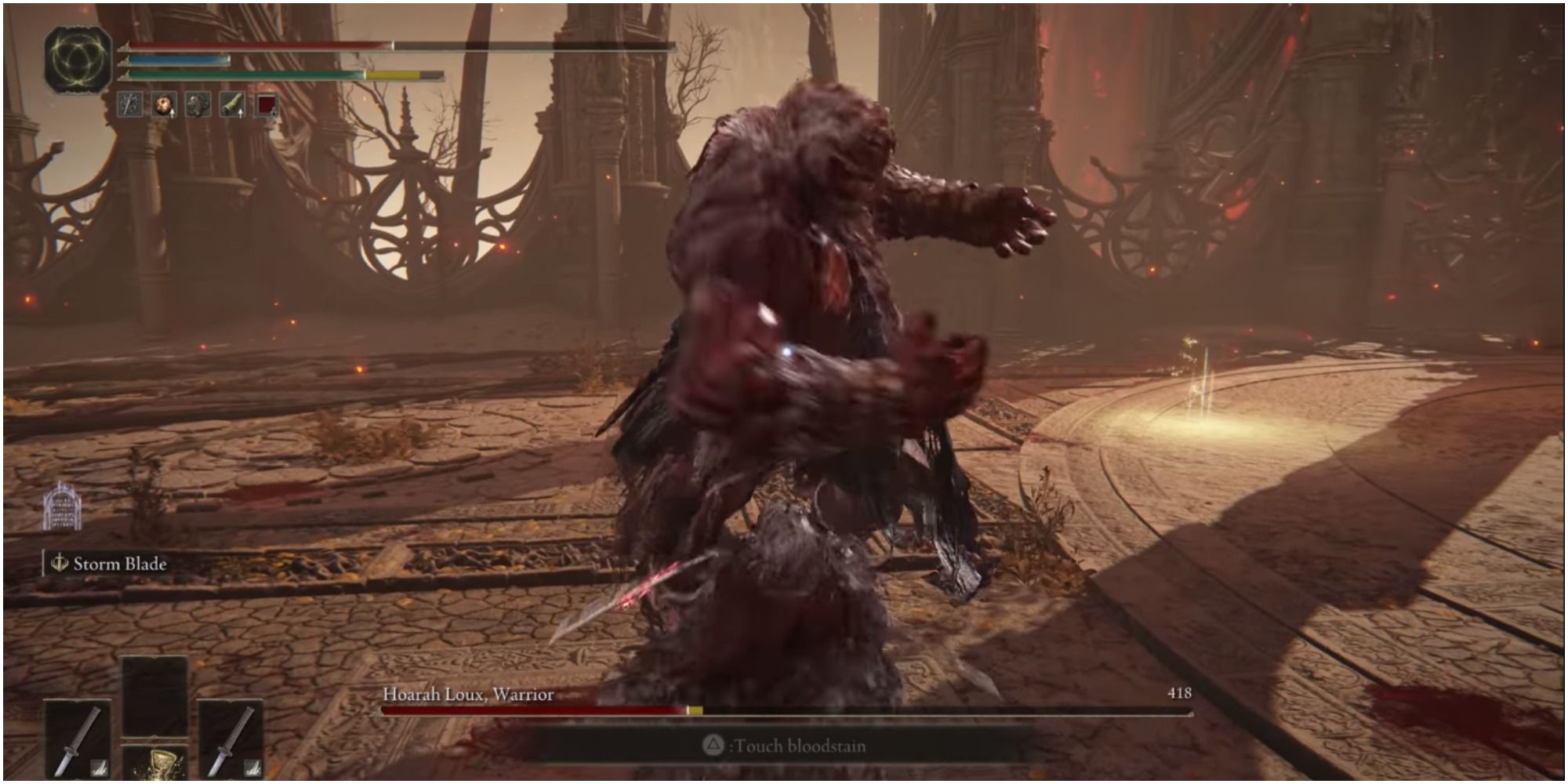 If you plan on facing the boss as a melee class, you will need to perfect your dodge timings. Getting caught in one of his axe attacks can lead to him performing follow-up strikes or stomps to deplete your health bar. Bringing a heavy weapon to the fight can help you deal a lot of damage, but can also leave you open to counterattacks if you miss. The boss has a steady posture, so aiming for a critical hit might be too much of a far-fetched idea.

If you have enough Arcane and Faith for the Rotten Breath Incantation, then memorize the spell for the fight. The boss can be affected by Scarlet Rot, and a few breaths will cause his health to decay little by little. In the second phase you will need to stay on the move as the boss does the same, and he can get behind you instantly to perform a grab. 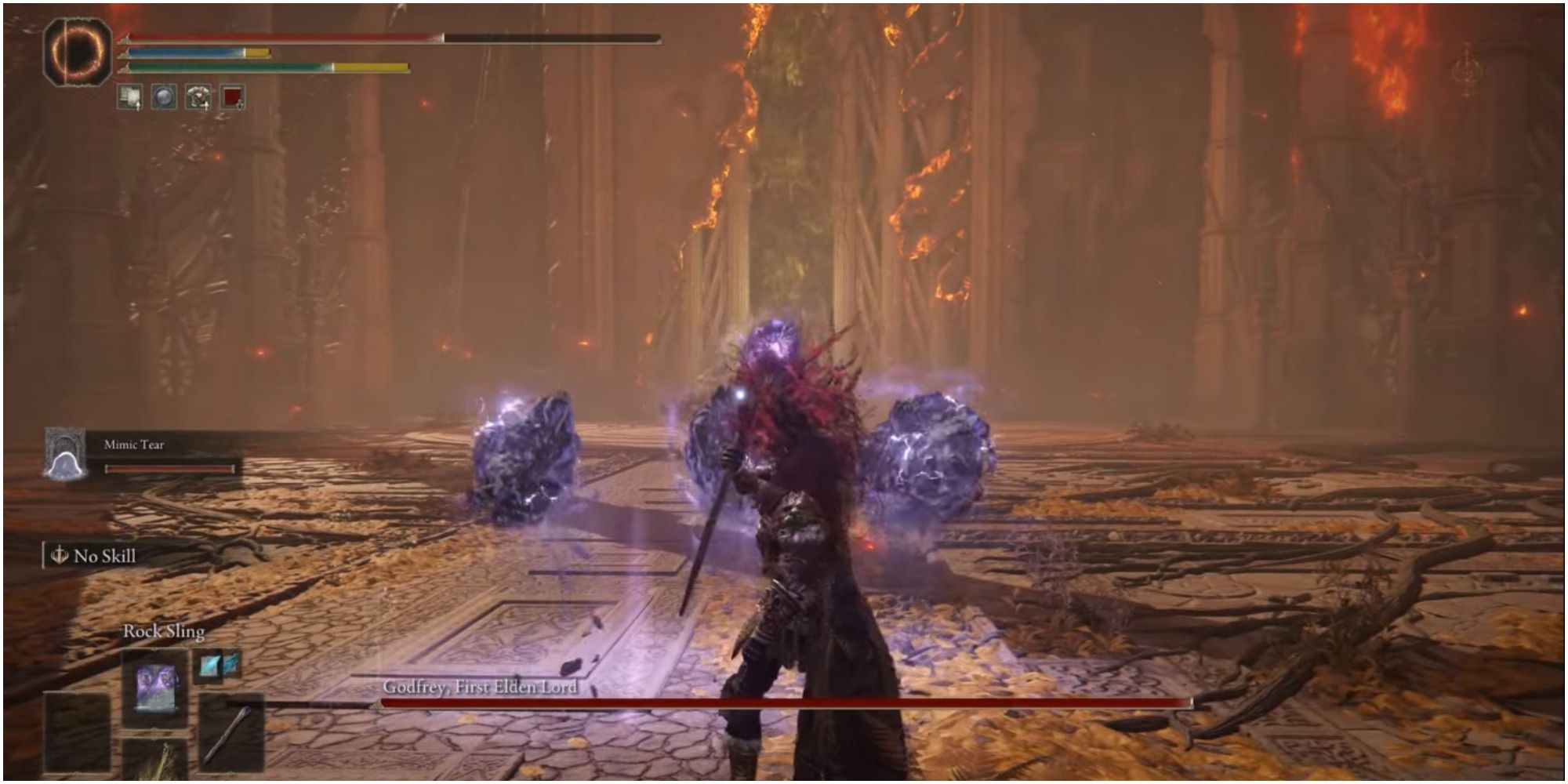 For the ranged strategy, try to bring hard-hitting Sorceries such as Rock Sling and Comet Azur. You can also put the Hidden Cerulean Tear into your Wondrous Flask to make the FP consumption zero for the next ten seconds.

Summoning a tanky Spirit Ash is also recommended, as you will need it to take the hits while you do burst damage from behind. As most of Hoarah Loux's attacks are AoE, you will need to keep your distance from your summon so the both of you don't take damage. Make sure that your summons make it to the second phase, as the boss becomes more aggressive. It can be hard to perform Sorceries while the boss is targeting you.

As a Sorcerer, you can also bring the Incantations Rotten Breath or Scarlet Aeonia in order to inflict Scarlet Rot on the boss. 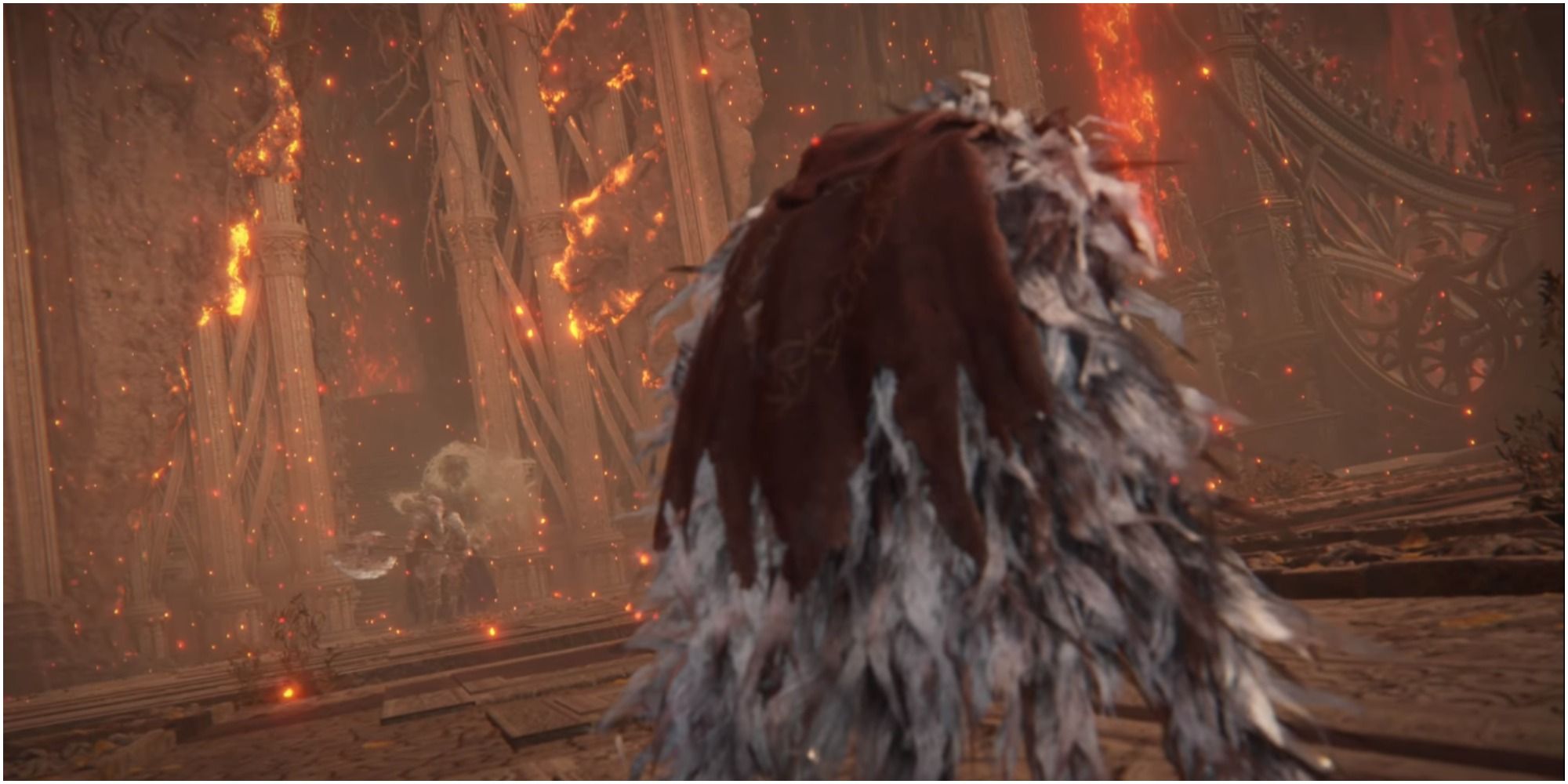