You are here:
Home / Elden Ring: How To Defeat Adan, Thief Of Fire

Elden Ring: How To Defeat Adan, Thief Of Fire

Elden Ring gives you ten Evergaol bosses to fight throughout The Lands Between, ranging from a towering, helmeted giant of a knight to the literal clone of Godrick the Grafted. These bosses range from extremely difficult to some that are easier to handle, and this hefty, human-sized boss might just fit the latter.

Adan, Thief of Fire is certainly a hard-hitting combatant with his wicked flail and globular flame spells, but he is way more manageable than the other Evergaol bosses like the Crucible Knight. Here are some of the best tips and tricks to deal with Adan, Thief of Fire. 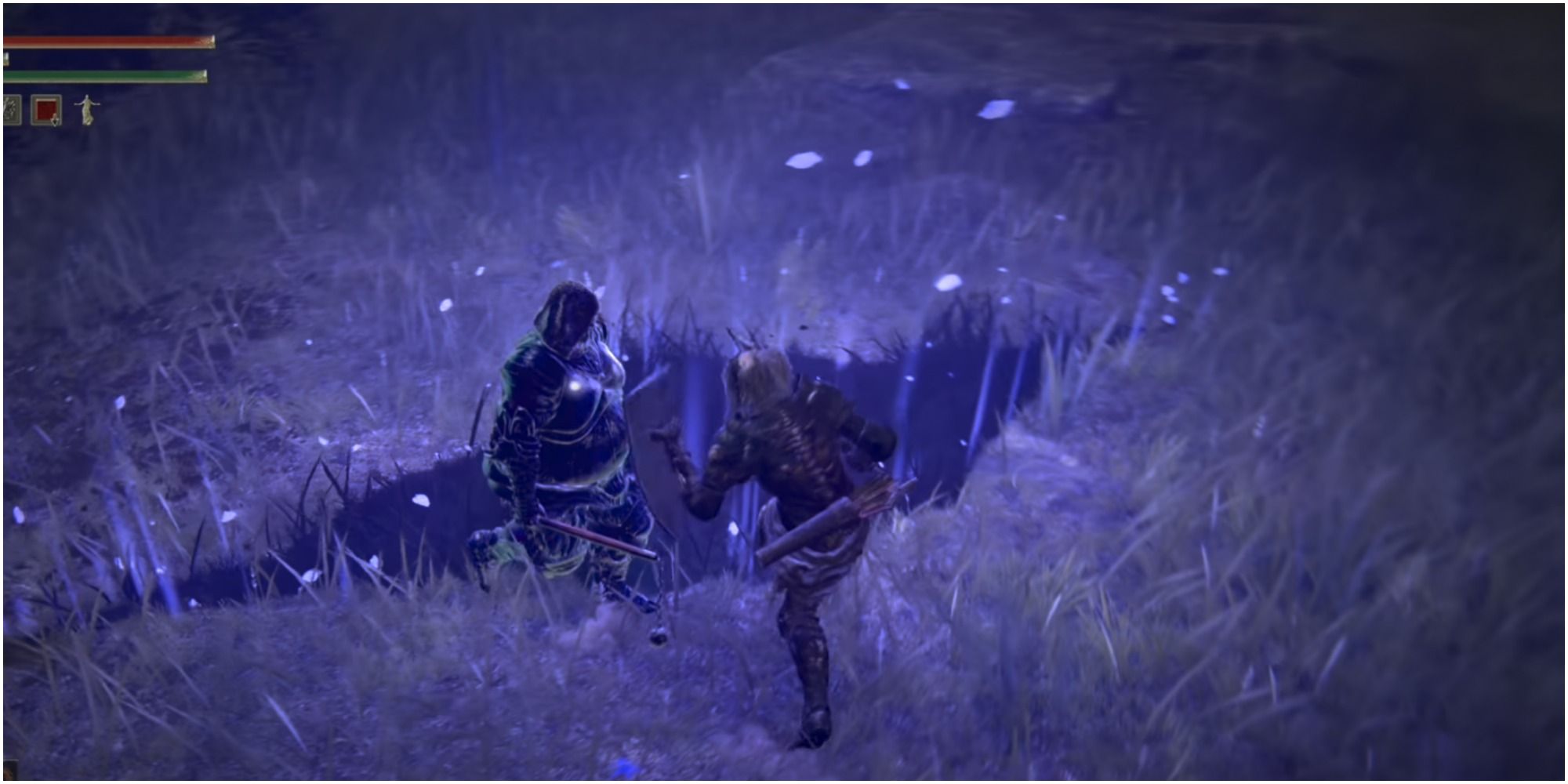 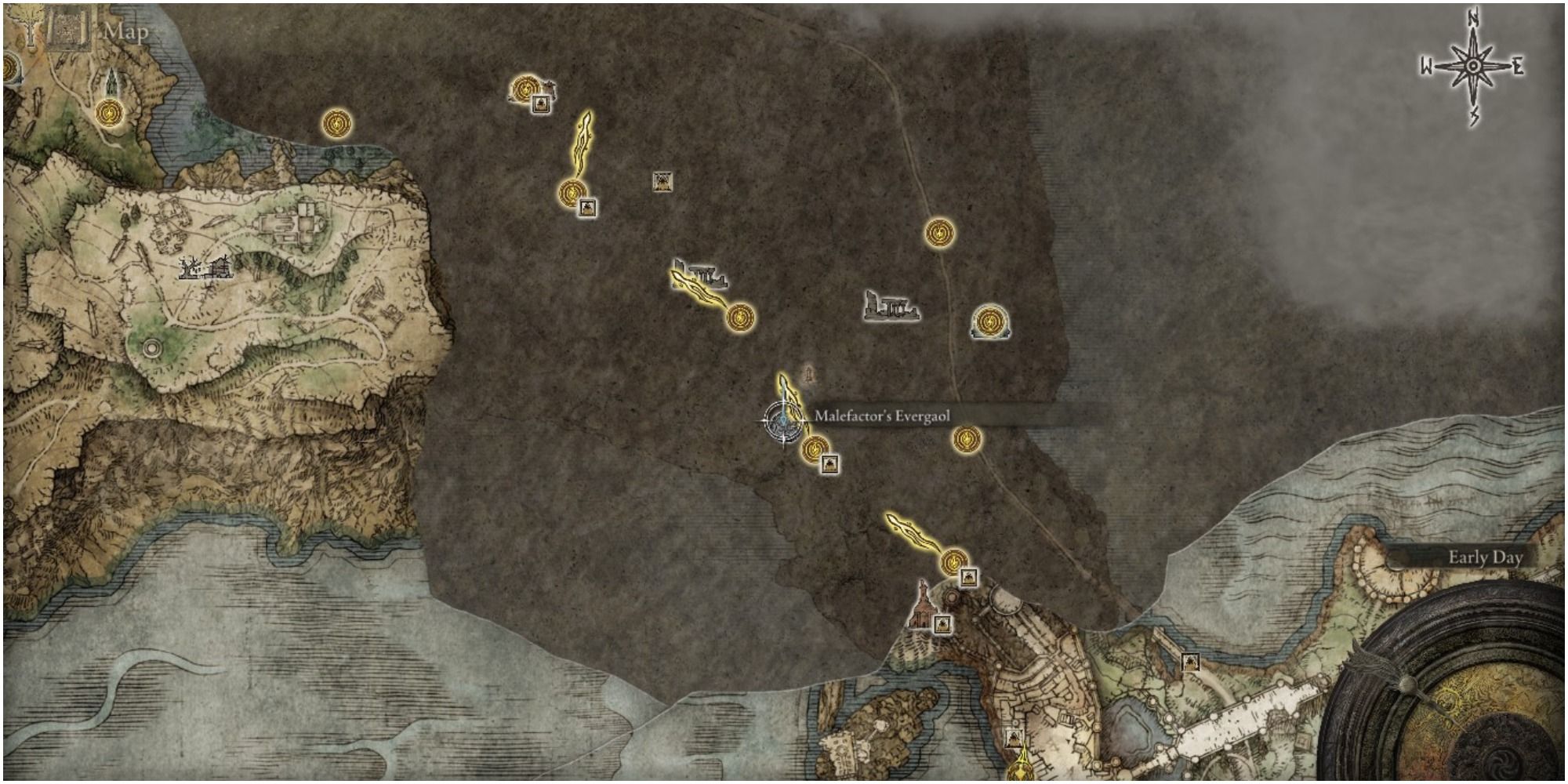 Unlike the other Evergaol bosses, Adan, Thief of Fire is more like fighting another hostile NPC and not some other otherworldly creature or superhuman. Found in Malefactor's Evergaol in southern Liurnia of the Lakes, you can reach it by teleporting near the Liurnia Lake Site of Grace, which is one of the first Sites of Grace in Liurnia.

Adan has a Crimson Tear Flask as well, but he can only heal once.

Wielding a flail, Adan can deal significant Bleed damage to you with just three to four hits and one-shot you if you're not careful. As mentioned in other Evergaol boss guides, you get absolutely no help when fighting against one of them. Having a weapon that's upgraded up to a +2 is enough to tackle Adan, but make sure to coat it with Lightning or Blood Grease to really pack a punch. As for sorcerers, arm yourself with sorceries that deal tons of physical damage or spells like Inescapable Frenzy. 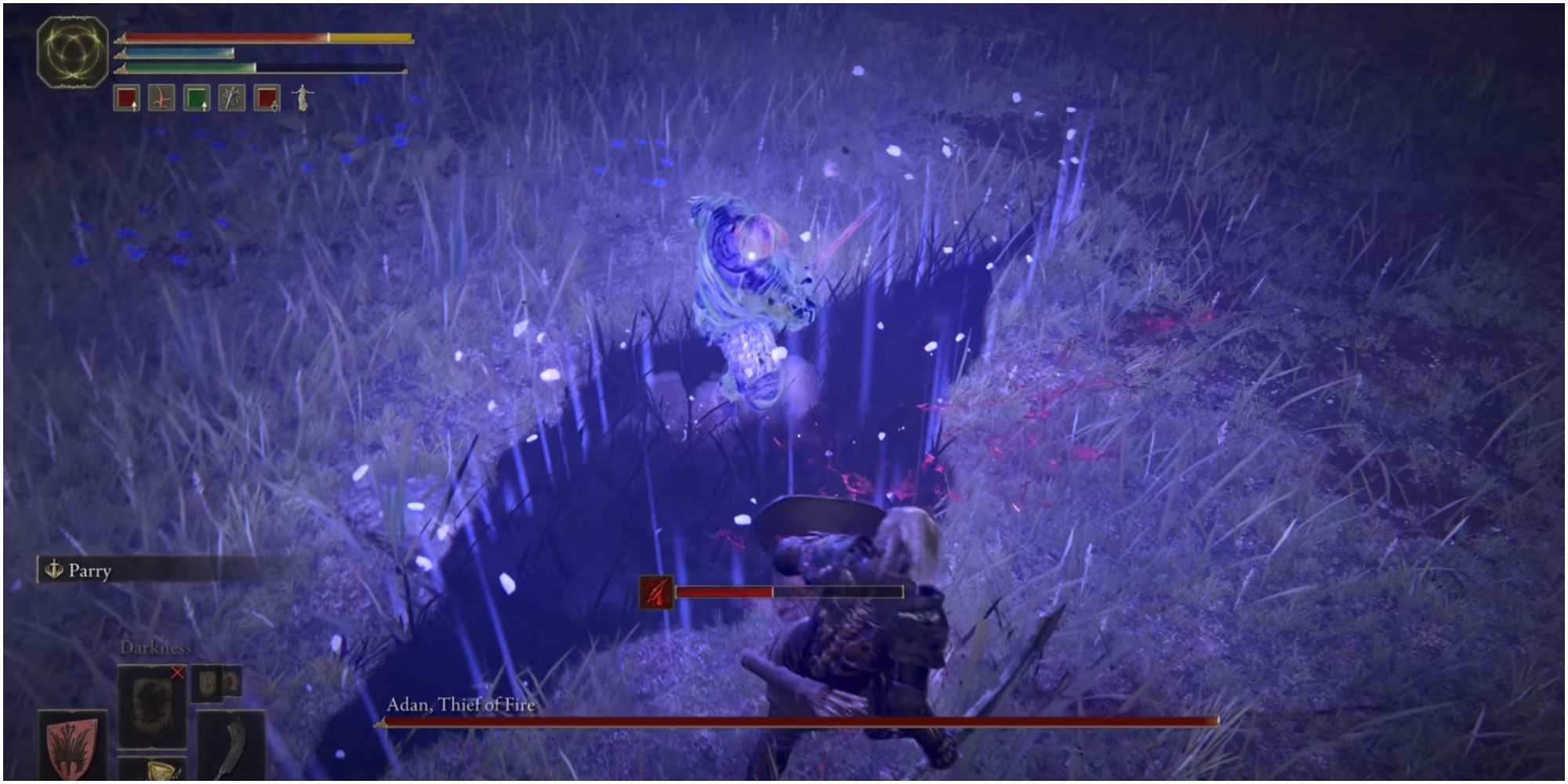 Adan utilizes an array of attacks ranging from devastating, consecutive hits to a single large blast of arcane fire. During this fight, keep a close eye on your Bleed meter, since, as mentioned before, two hits and the meter is already filled close to half. We'll give you a detailed list of Adan's attacks and how to counter them.

Using a shield will block one hit, but the next hit will stagger you. Also, using a shield does not negate Bleed buildup. 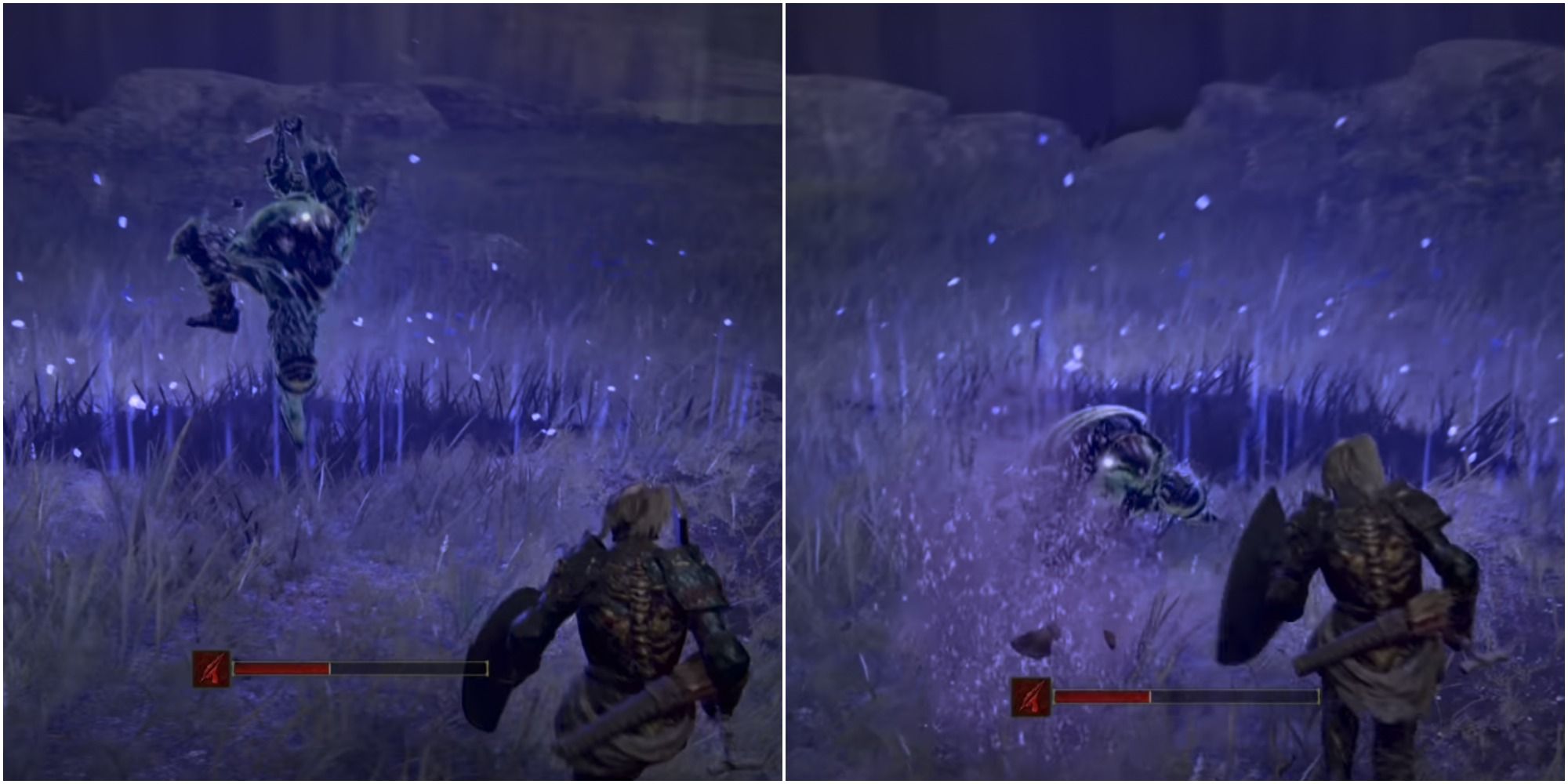 For this attack, Adan will do a swing before doing a full 360° turn, leaping into the air, and slamming his weapon onto the ground.

Counter: The best thing to do when facing this attack is to roll away as far as possible. However, you can perform a backstab if you roll forward when he leaps and take away a chunk of his HP.

Flame Of The Fell God Attack 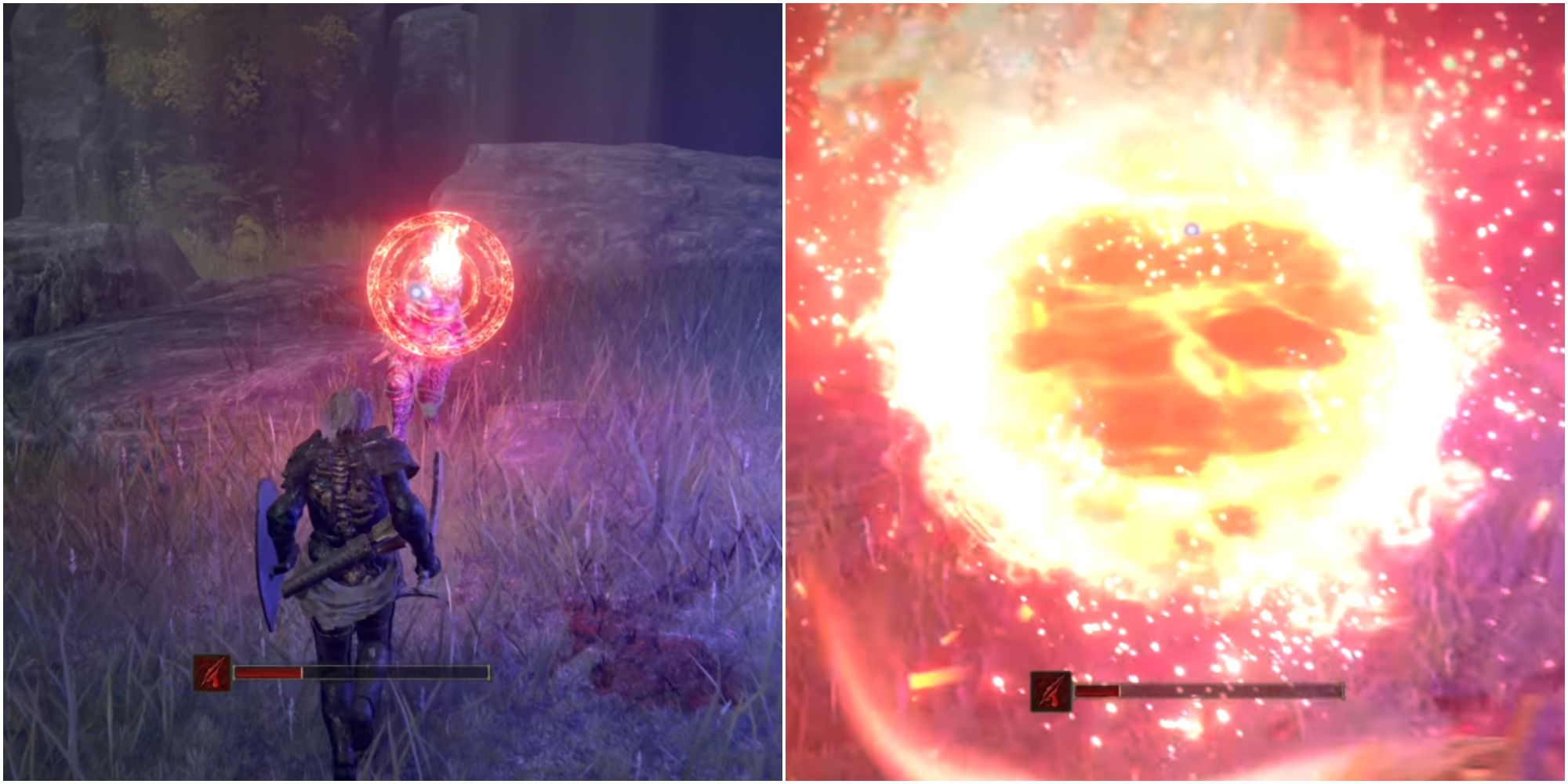 One of his most notable attacks, Adan will hold out his hand and a red rune appears, before proceeding to throw a huge ball of fire into the air. This ball of flame follows you, and it will get brighter and brighter, eventually exploding and dealing a large AoE attack that causes the surrounding area to catch fire.

Counter: As soon as you see a red, circular rune around Adan's hand, back away immediately. 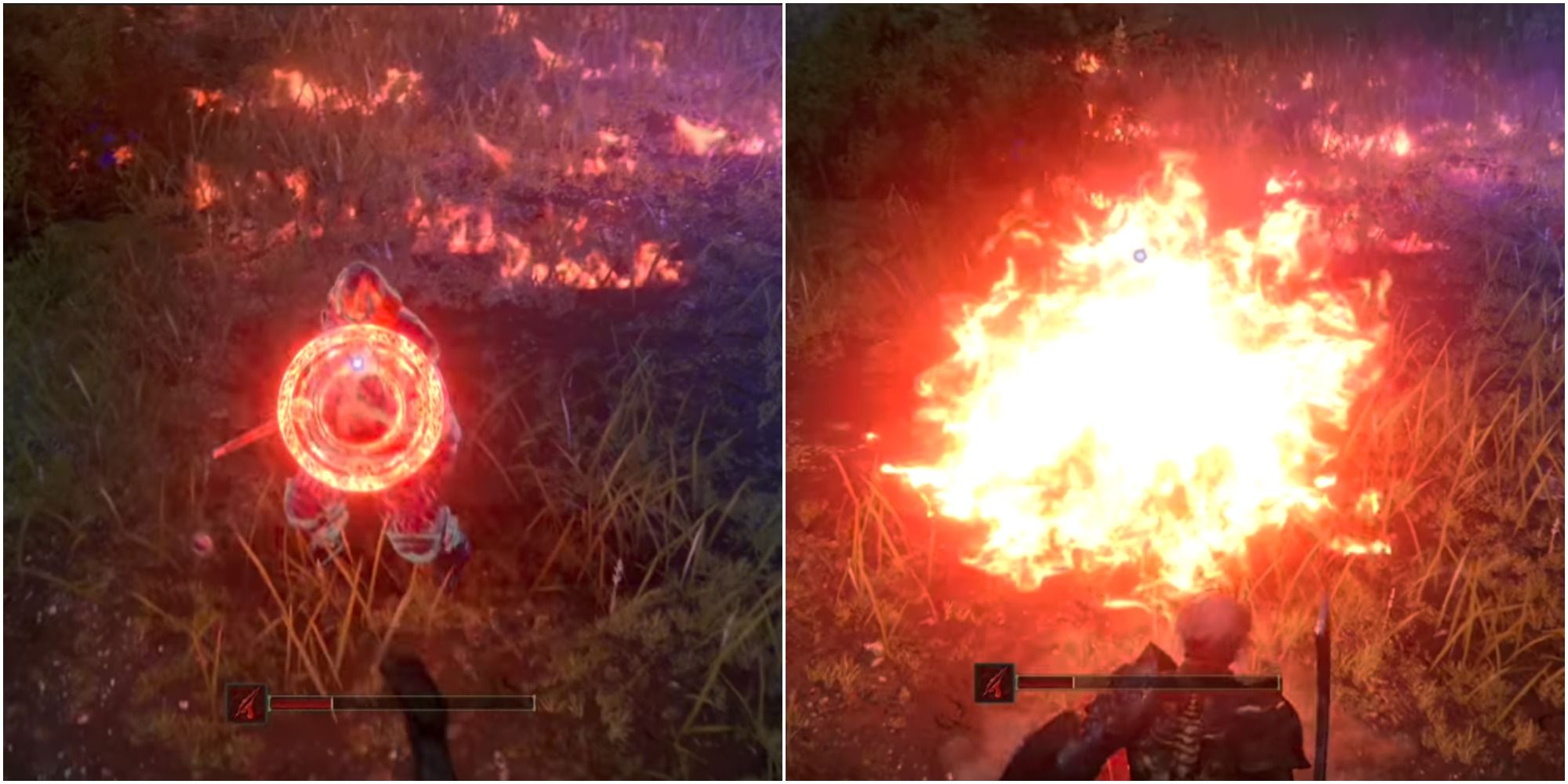 Similar to the previous attack, a circular red rune forms around his hand. But this time, a large stream of fire bursts from it.

Counter: Like the Flame of the Fell God attack, immediately roll away from Adan. 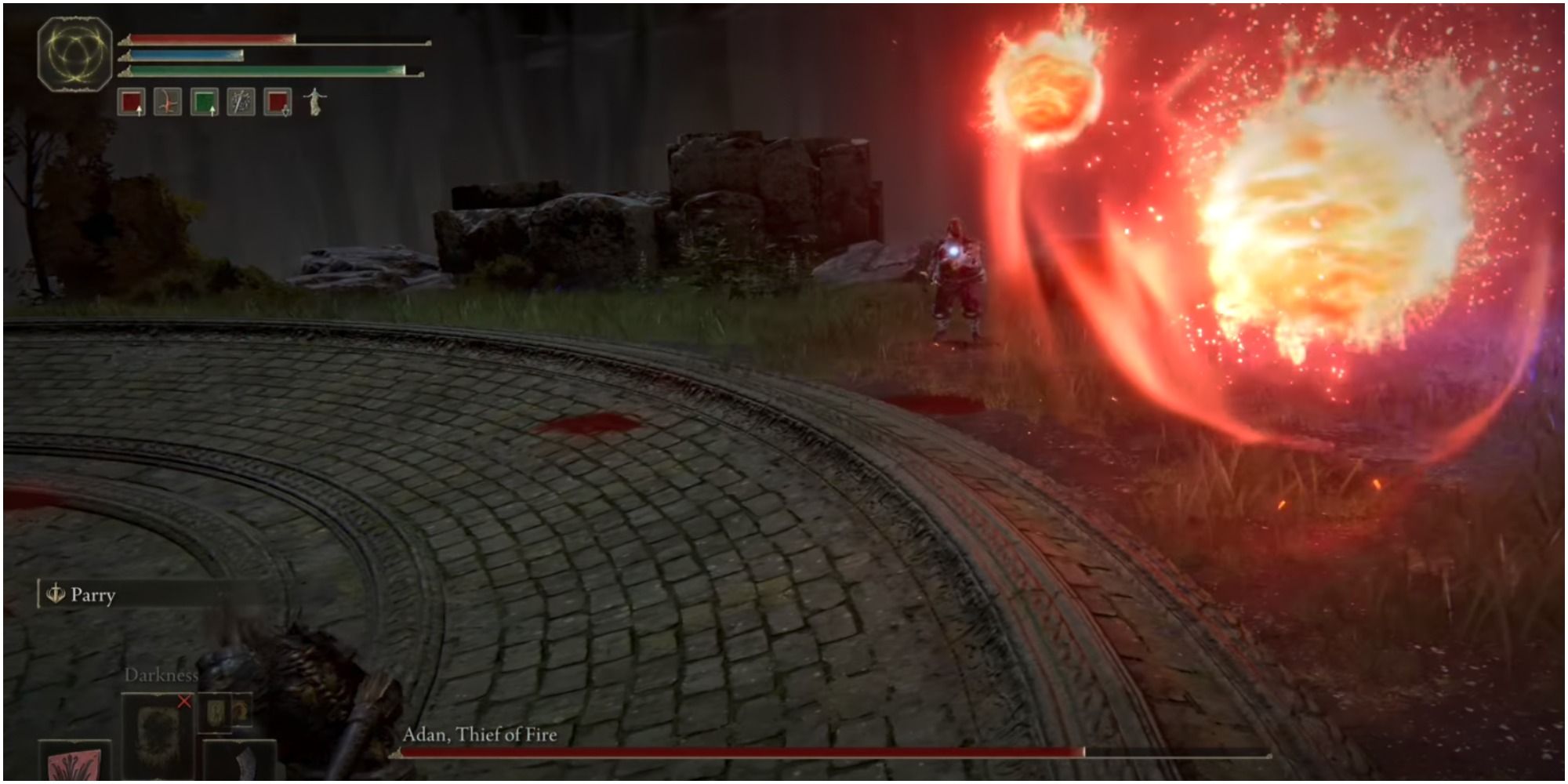 Unlike the Flame of the Fell God attack, where he only summons one flame globe, Adan will throw up three flame globes consecutively. They will glow brighter and explode one by one.

Counter: Once more, evade as far as you can while still keeping an eye out of where Adan is. 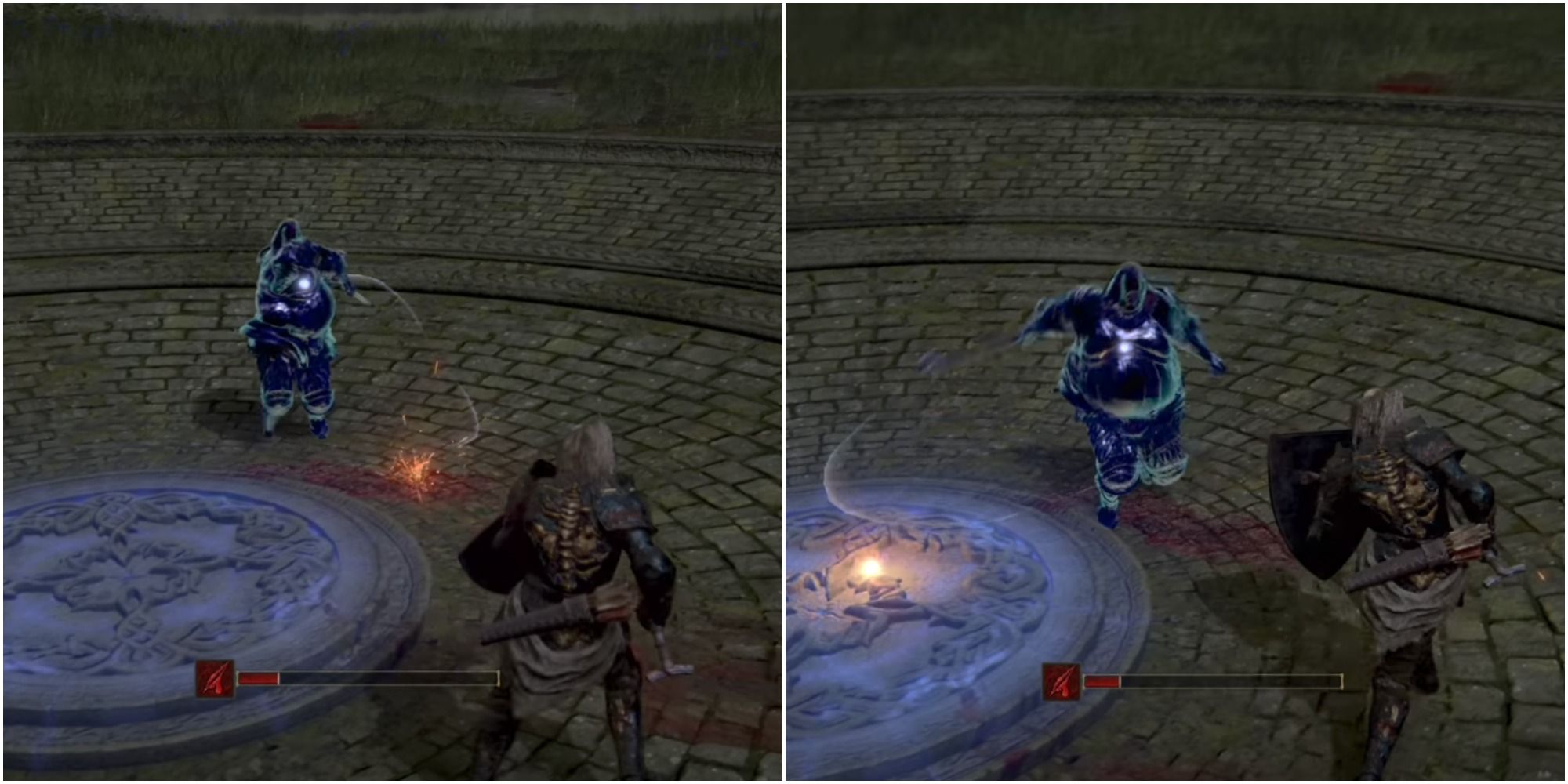 A standard attack Adan performs with his flail, Adan swings his flail up to six times.

Counter: Back away a fair distance from this attack, or try to get behind him for a backstab. 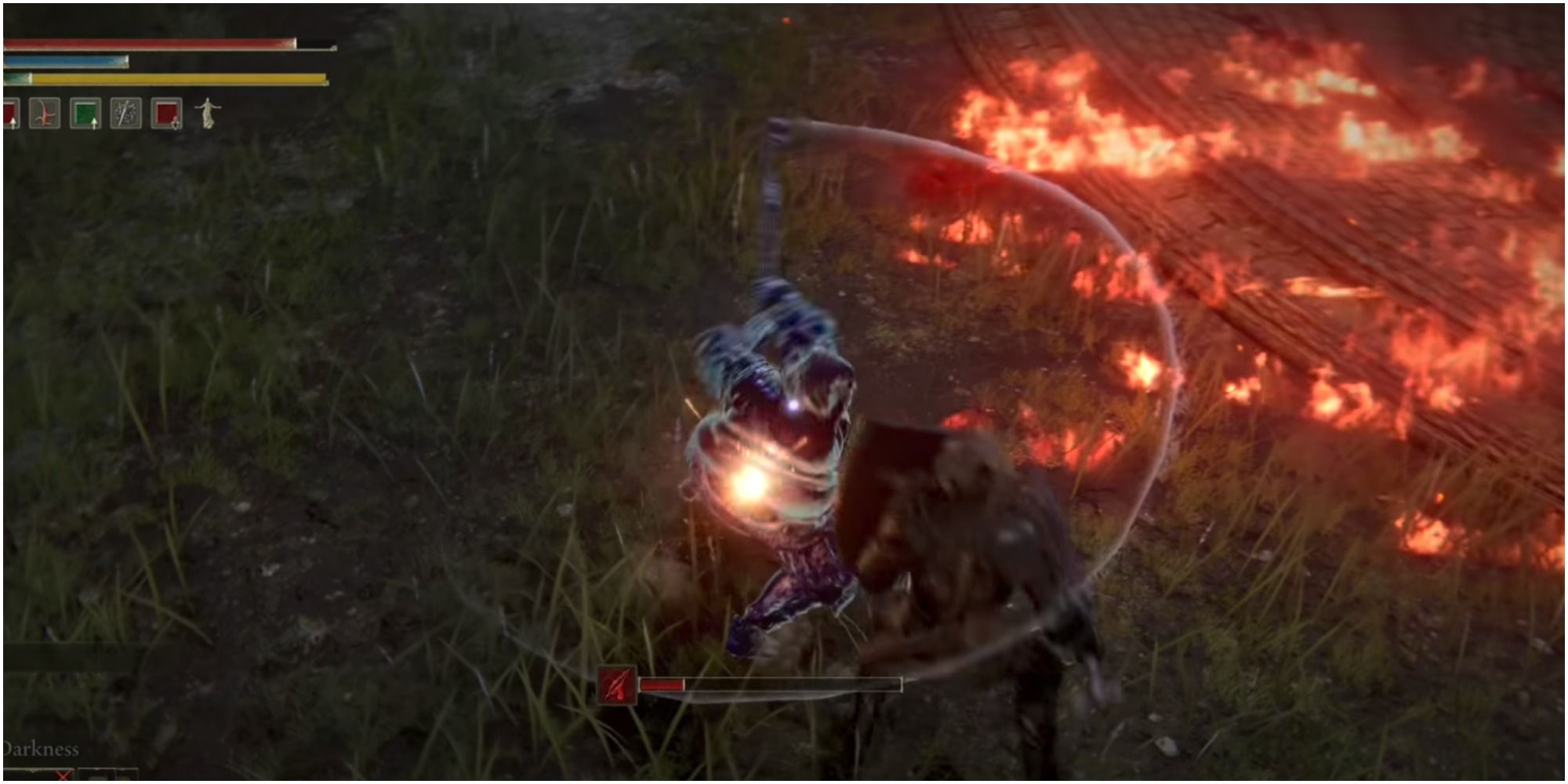 Unlike the other swing attacks, he does a full devastating, roundhouse swing.

Counter: Using a shield will negate damage from this attack; you can also roll away. 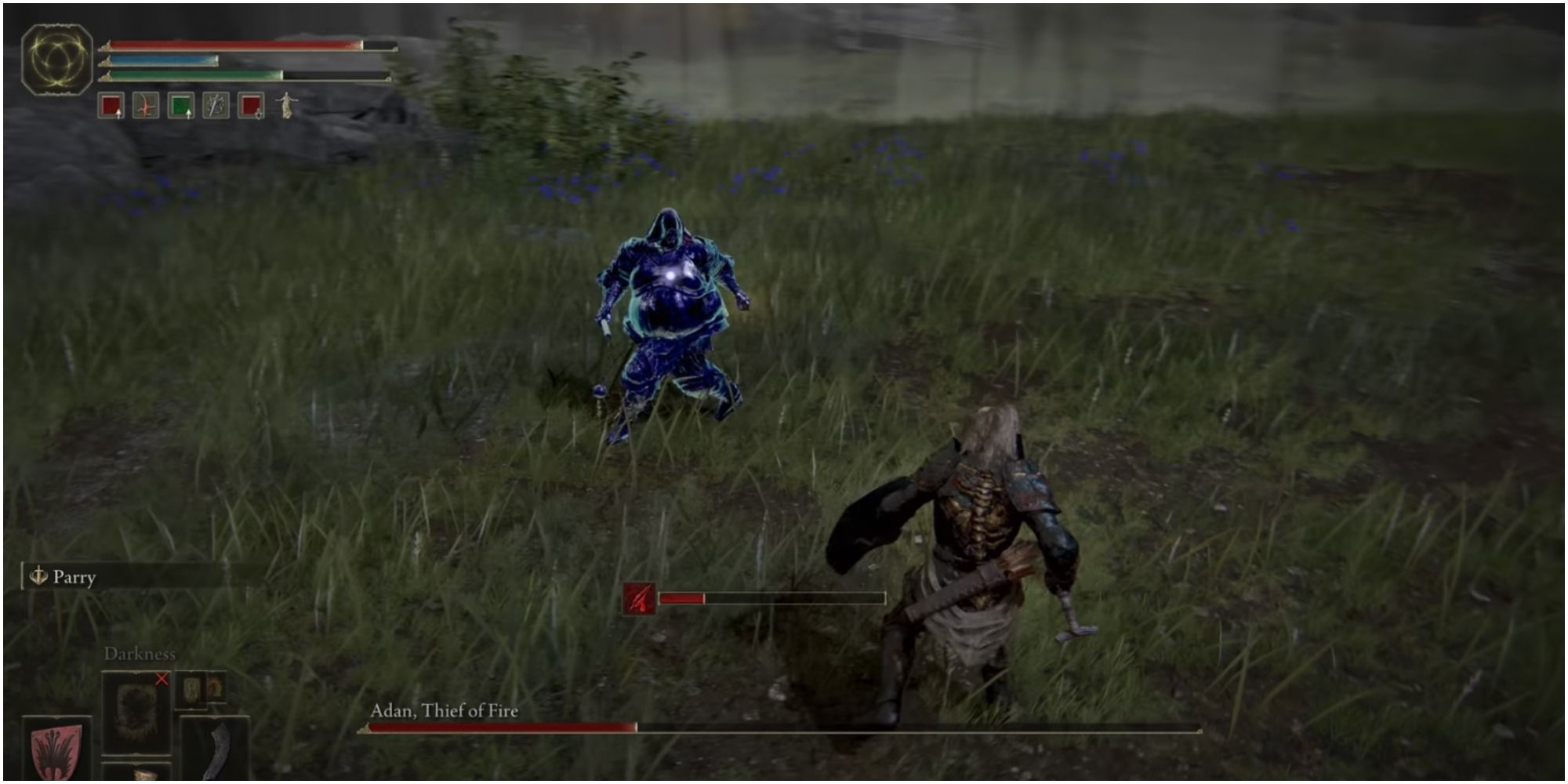 As usual, there are two different strategies to go about defeating Adan, Thief of Fire. Ranged fighters might find this fight particularly annoying because, when throwing a spell at Adan, he can simply bob and weave. However, for melee fighters, it's also an issue of finding the right moment to strike. 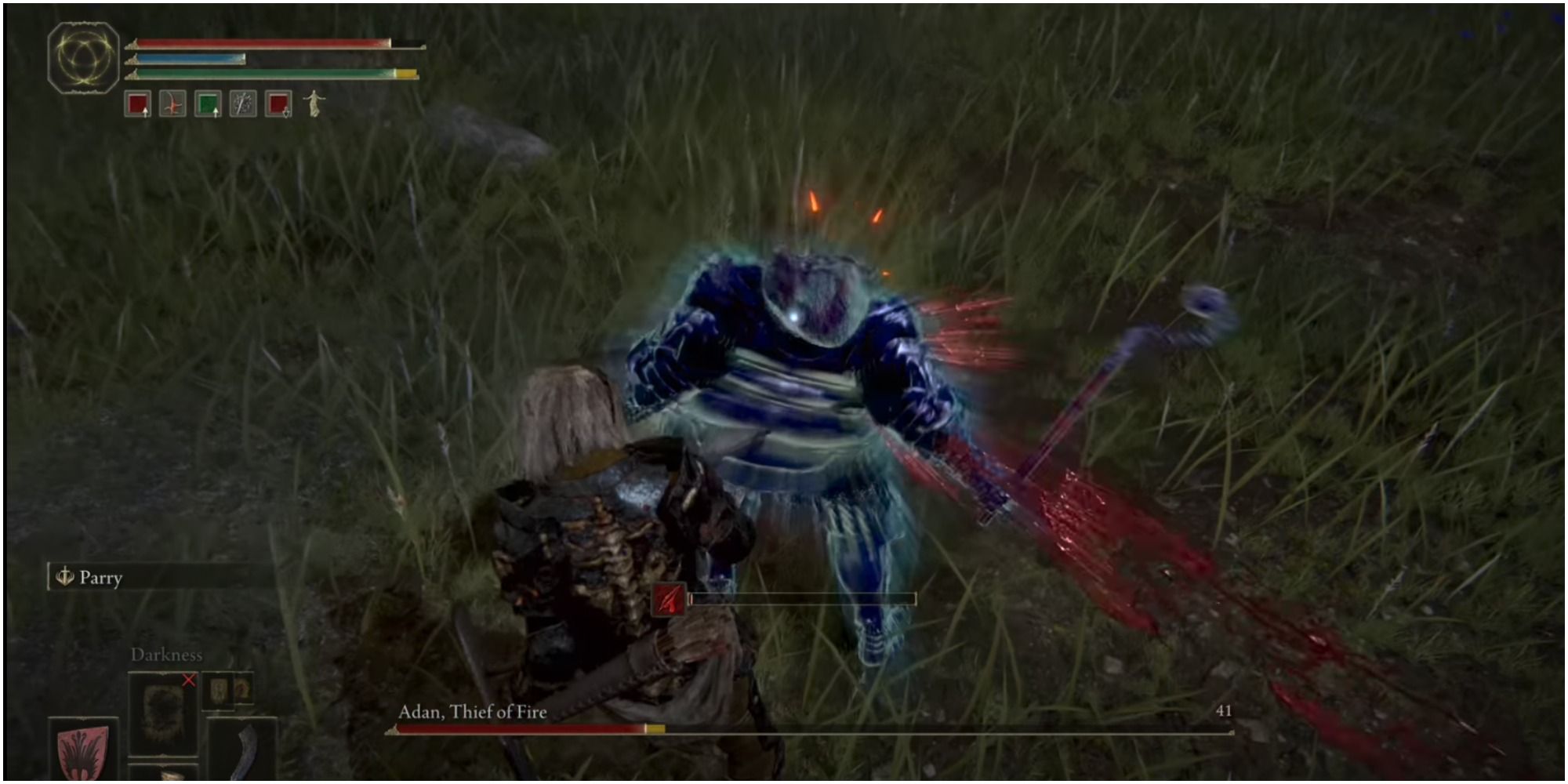 It's been outlined in the overview that Adan is vulnerable to physical, Bleed, and lightning attacks. You can either arm yourself with a weapon already causing a blood loss effect (i.e. Bloodhound's Fang), or craft some Blood Grease or Lightning Grease and arm it before the fight. Furthermore, using a spear or halberd is quite effective against Adan. As mentioned before, utilizing a weapon that's been scaled up to a +2 is sufficient for this boss.

Adan badgers you from all ends; if he isn't swinging his flail around in a frenzy, he sends globes of flames to chase after you before exploding. One strategy is to bide your time and find a moment to slip in for a backstab, like after he lands on the ground after a leap or when he's about to perform a fire breath attack.

Do note that Adan is not parriable, so don't waste your time trying to time yourself to parry him. 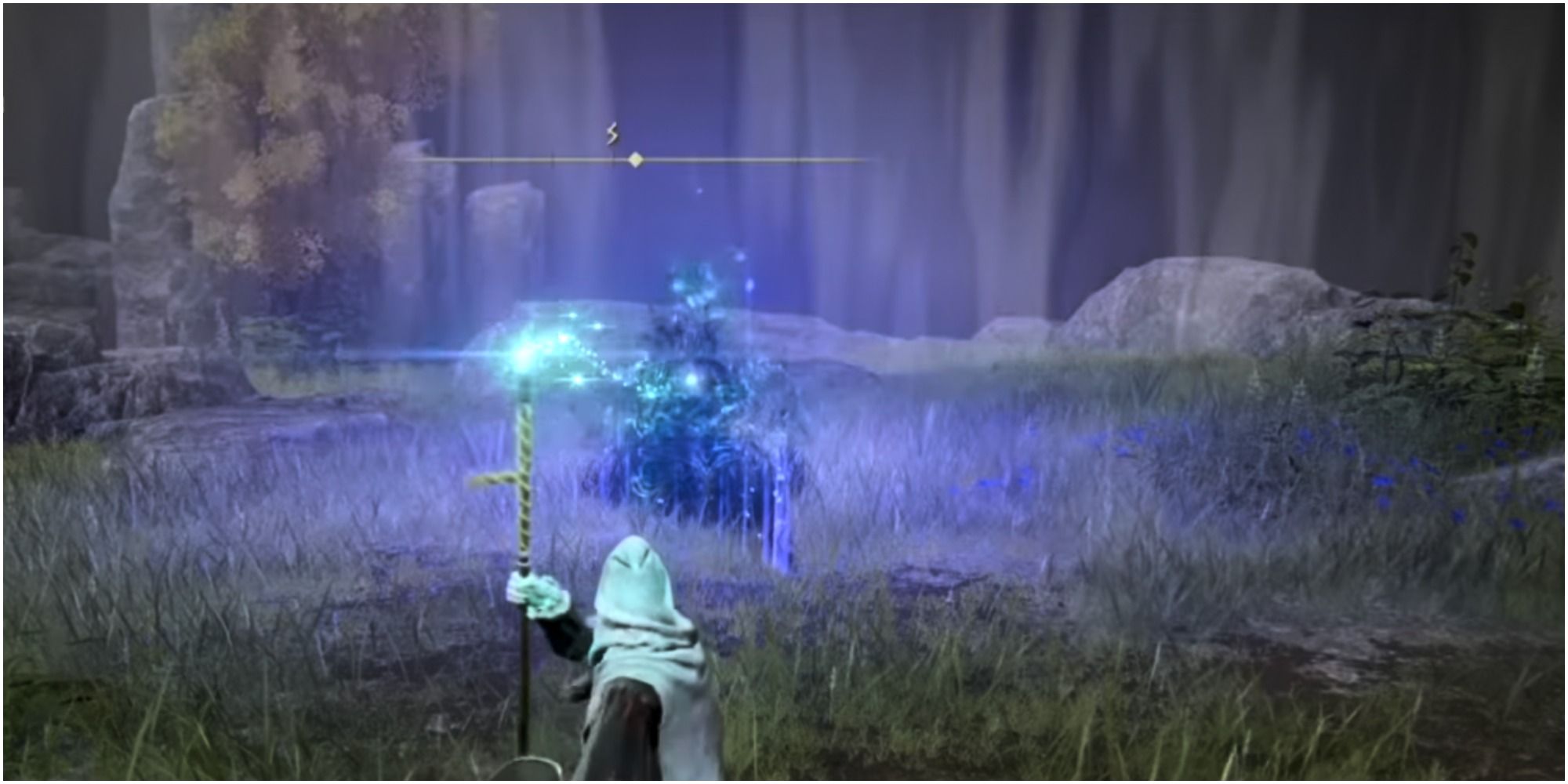 For sorcerers, Adan is extremely quick-footed, so flinging your spells might take some time until they hit. It is not recommended to use a bow to deal with Adan, as he is far too nimble for you to make a difference. But as for spells, using Frenzy-type spells or spells that deal considerable physical damage – like Glintstone Pebble or a Glintstone Shard – will be the best way to deal with him.

The best times to inflict your spell are when Adan is either about to unleash his fire breath spell, when he's charging at you, or about to heal.