FromSoftware opened the floodgates of possibilities in its latest game, Elden Ring. While it has many similarities to Demon's Souls and the Dark Souls trilogy, it has plenty of unique qualities. One thing it takes from Souls but emphasizes here is dragons, which are shown in other games, but in the Lands Between they are plentiful.

Dragons offer epic, difficult battles that are highly rewarding. While you get plenty of runes to help level you up, you get the dragon's heart. Consuming one in the Church of Dragon Communion or the Cathedral of Dragon Communion will grant you a selection of incantations. Some are nice but not going to move the needle in terms of your power. Others, though, will make the likes of Margit and Radahn fear you. 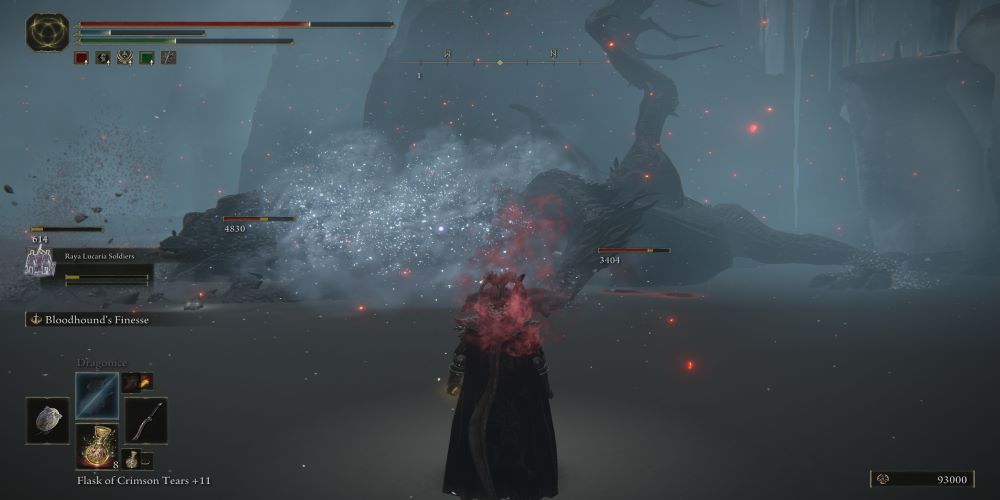 Investing your runes wisely gets you some higher-tiered incantations, especially in the realm of dragon powers. You don't have to worry early on, as it is quite easy to obtain Dragonice. While not the best for most bosses, it is useful against groups of mobs or tougher non-boss enemies.

The low cost to cast and low bar for your Faith makes this an easy grab. When used, it damages your foe while giving them frostbite. The status effect slows stamina recovery and lowers damage absorption. Since the next frost-based dragon breath attack is unavailable until the late game, you frost lovers will have plenty of time to use Dragonice. 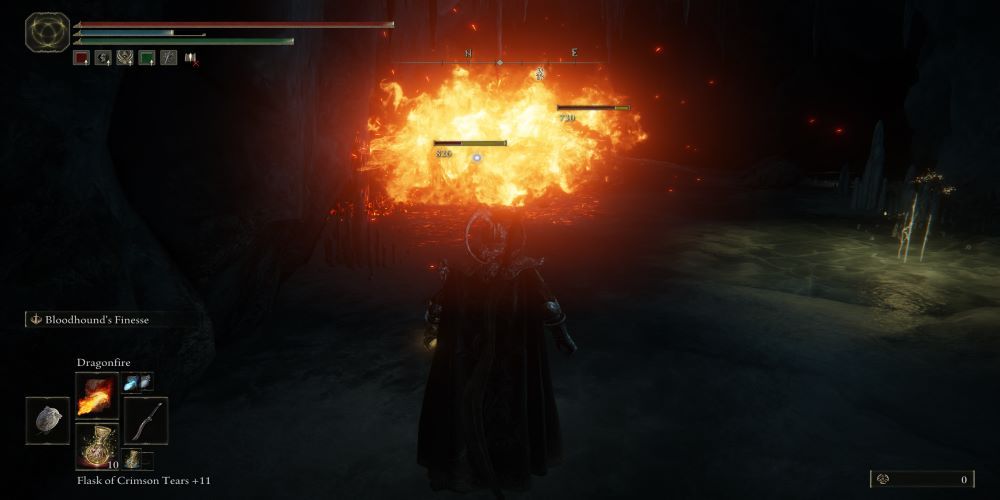 A great starter incantation, especially for dragon builds. When you see something scary, the typical reaction should be to burn it, and in FromSoftware games, you see a lot of scary things that deserved to be set on fire.

Useful for its cheap cost of FP and not requiring much Faith, you should be able to use this right when you get your first dragon heart. For best use, burn hordes of mobs into a mound of ash. When it comes to bosses who are weak to fire damage, this will get you by until you learn better fire incantations. 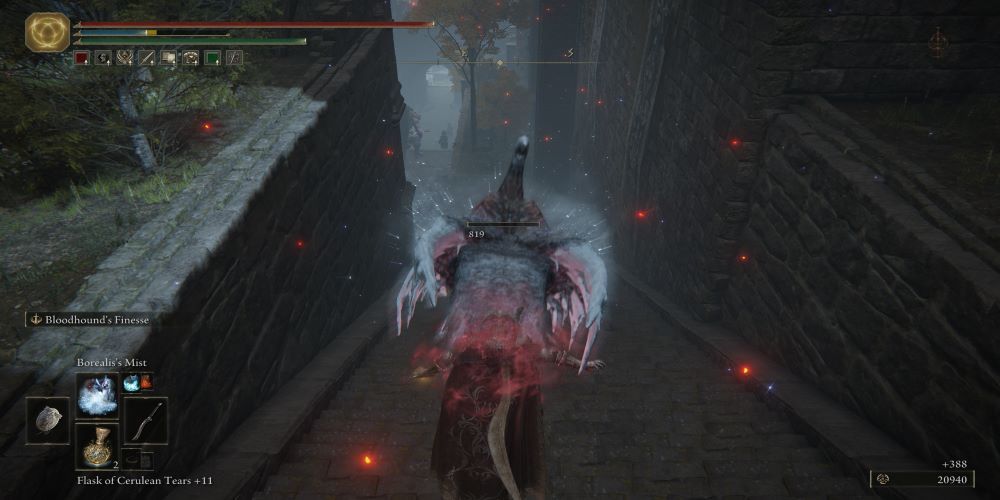 Back to frost, except for this one, you will have to wait until you can fight Borealis in the Mountain of the Giants, which is not until later in your adventure. If you liked Dragonice, though, then the wait will be well worth it for a better frosty dragon breath.

The difference between any normal dragon incantation of frost, fire, or anything else is that when you attach the boss dragon's name at the beginning, it always means you are getting some air when casting. Leap up to spray frostbite-inducing breath for greater range and damage to your soon-to-be chilly enemies. 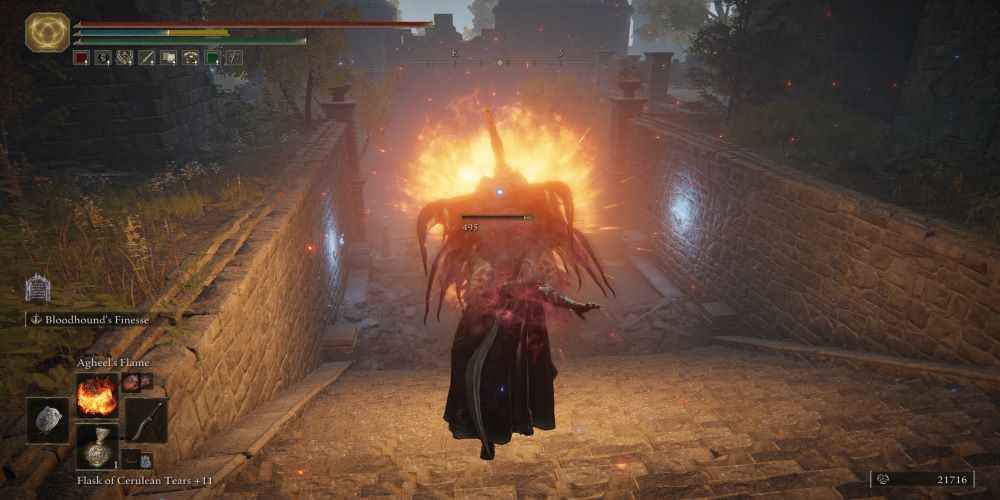 The upgraded edition of Dragonfire that you obtain from Agheel in Dragon-Burnt Ruins in Limgrave. Although you need 23 Faith with 15 Arcane, a little more than the 15 Faith and 12 Arcane for Dragonfire, the ruins to fight this beast can be reached early on. It will be a difficult fight if you are at a low level, but with preparations or leveling up, you will have a great fire incantation at the beginning of the game.

Jump up to shoot fire at mobs or bosses to do great fire damage with an increased range. It will be tough for enemies to get away from being burned alive. 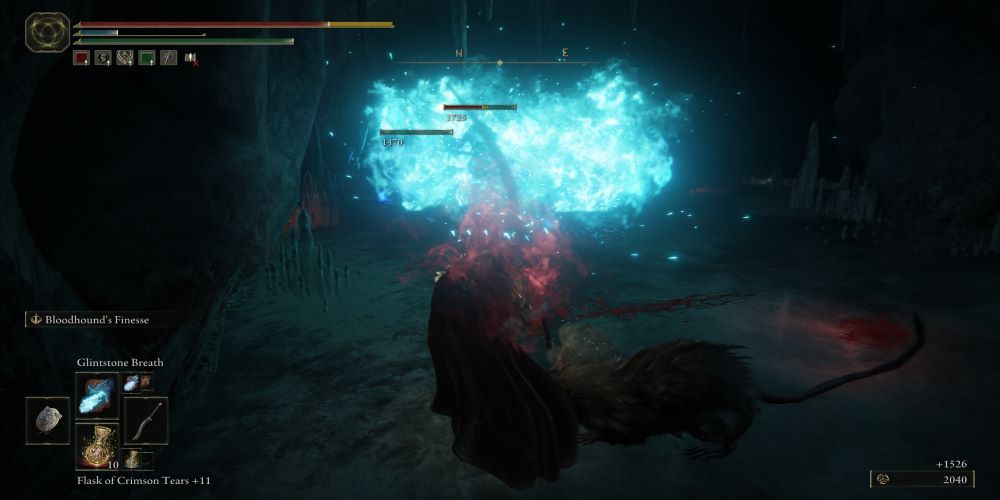 Magic in any form in a Soulslike means you are going to eviscerate 99 percent of enemies in your way. Elden Ring is no exception, but why shoot magic from a staff when you can grow a dragon head to shoot magic fire? It is way cooler that way, that's why.

Glinstone Breath can destroy just about any boss or mob, with few exceptions for the ones who are resistant to magic. So, maybe not use this in the Raya Lucaria Academy unless you love this incantation so much that you are unafraid of resistant enemies. 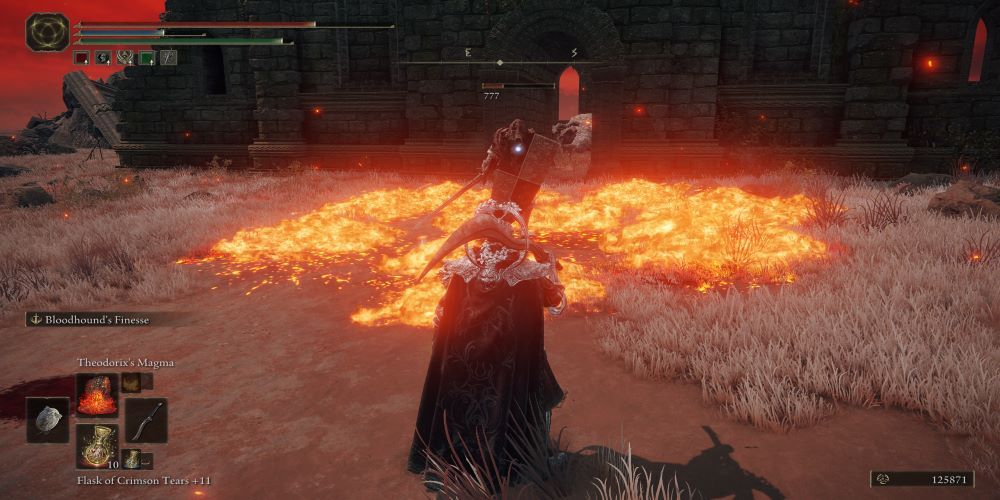 Another late-game incantation that is unique for not coming from the typical dragon but a magma wyrm instead. Finding this specific wyrm in a frozen river that is slightly north of Albinauric Rise in the Consecrated Snowfield.

What separates this fire-based incantation is that it shoots out magma rather than the normal flames that you would have used at this point in the game. When enemies step in, they simultaneously take fire damage and are slowed down. It is a good one to use for crowd control. 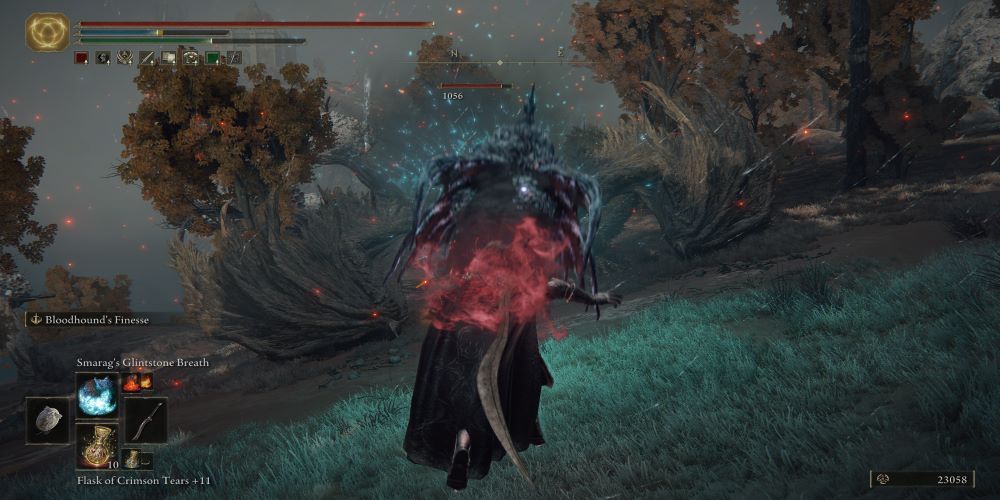 The only thing better than magic fire is breathing it in midair. Smarag's Glinstone Breath is far stronger with a longer reach than the normal Glinstone Breath you get early on. Now, you can seriously wipe out just about anything without sweating—as long as it is weak to magic.

First, you must defeat Smarag in Liurnia of the Lakes. This is an important fight as the dragon sleeps right on the Academy Glinstone Key that you need to get into the Academy. While you can run around the dragon for the key, if you want this power, you need to slay it and devour its heart. 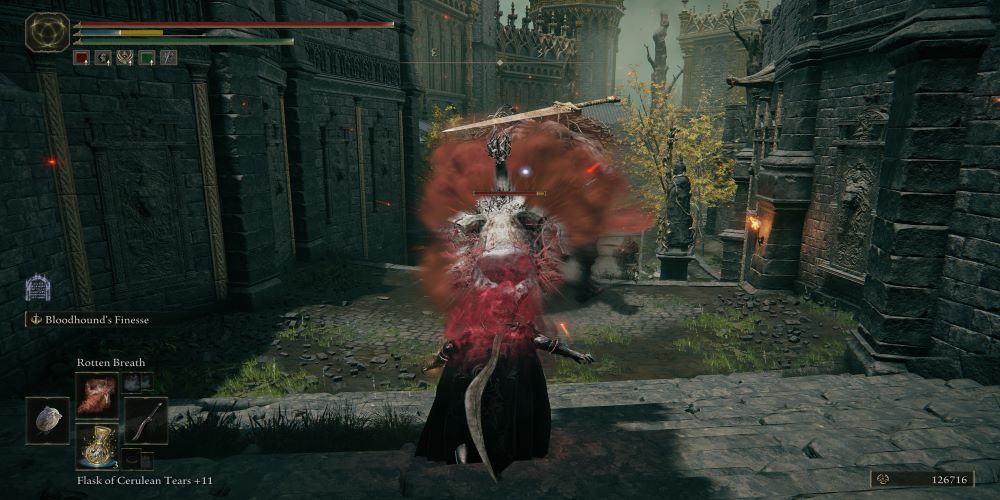 Out of any status effect, Scarlet Rot is one of the best in Elden Ring. With some exceptions, it will slowly break down any mob or boss. The initial damage is great for most enemies, but it is how it slowly kills them once it goes into effect that makes this special.

The modest 15 Faith and 12 Arcane make this an easy unlock, especially since it should be required for anyone using incantations. For that initial damage when the rot hits, you will want high FP to drag out the breath for maximum damage. 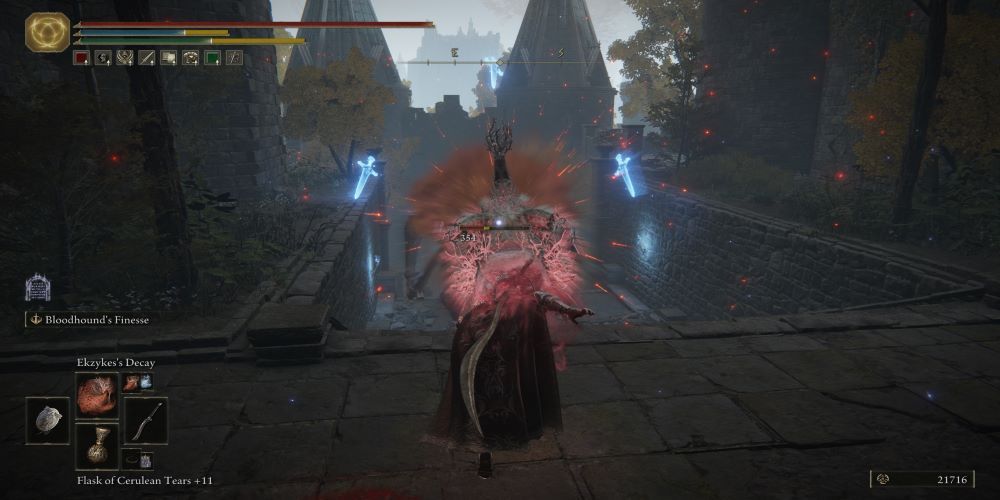 When you arrive in Caelid, find Decaying Ekzykes, and kill it to gain the deadlier edition of breathing out this likely stinky breath. Like dragon communion incantations, you will jump high in the air and unleash a wave of the toxic gas. The effect is more effective with a range to cover more ground, so nobody escapes your wrath.

People call magic easy mode, but those people may not have been introduced to Scarlet Rot. Whether it is Ekzyke's Decay or Rotten Breath, you will feel a significant difference in difficulty. 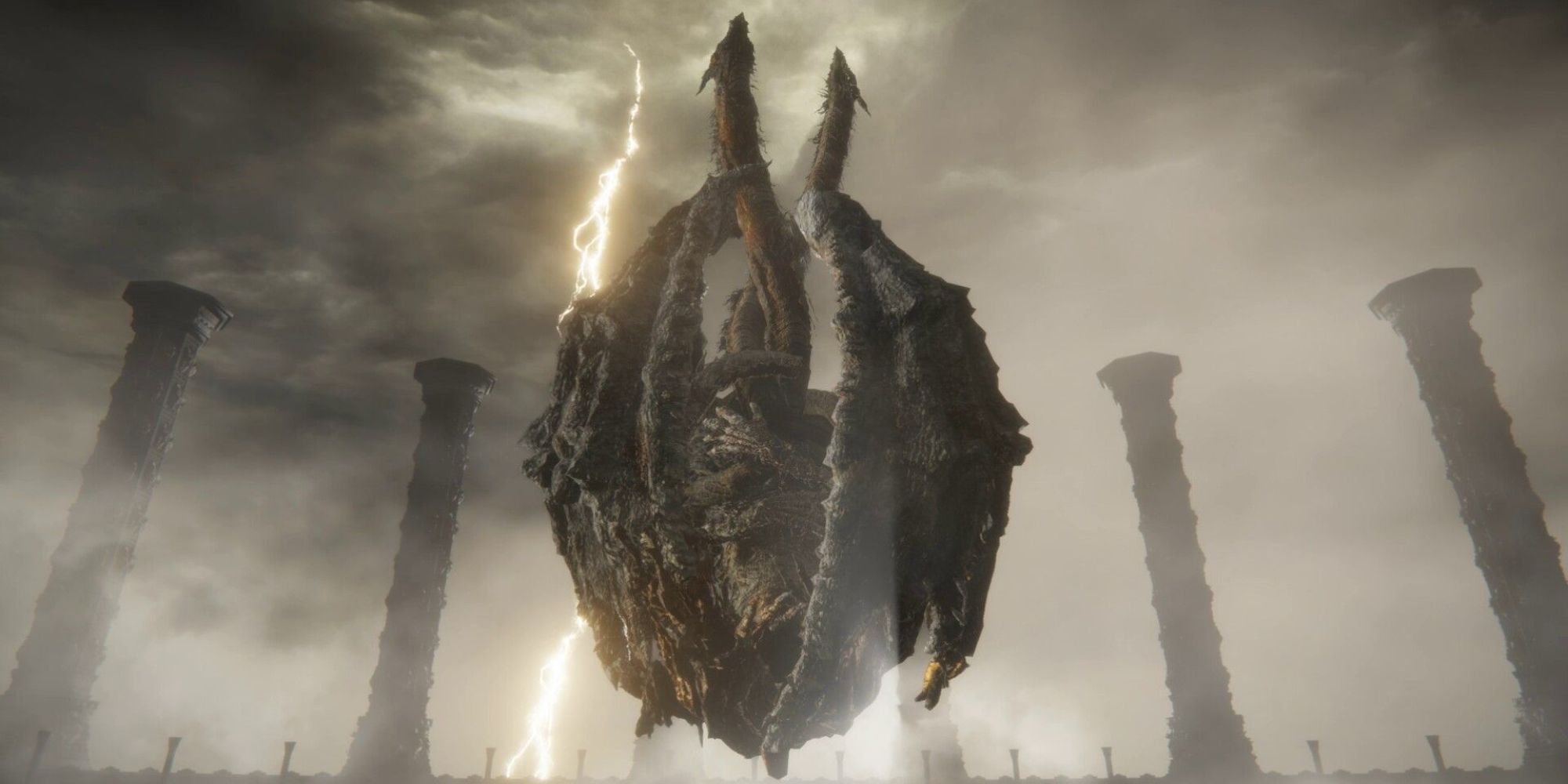 The secret boss Placidusax, a two-headed dragon, is not available until you are on the road toward the endgame when visiting Crumbling Farum Azula. When you turn in its remembrance at the Roundtable, you get this incredible power.

Although it technically does not count as a Dragon Communion spell, an exception is being made as it is a dragon breath that you gain from killing a dragon. Plus, it causes lightning and explosions, which is so incredibly cool; how can you not want it? All other dragon incantations are directional with little ability to aim. In this case, you get to fire in any direction to ensure nobody survives your wrath.