You are here:
Home / Edge Of Eternity: The Battle System, Explained

If you've played any of the turn-based JRPGs of yore, Edge of Eternity should feel familiar. However, the game's battle system emphasizes environmental factors, adding a tactical aspect to the flow of battle. Keep reading, and we'll tell you how these old and new features work together. 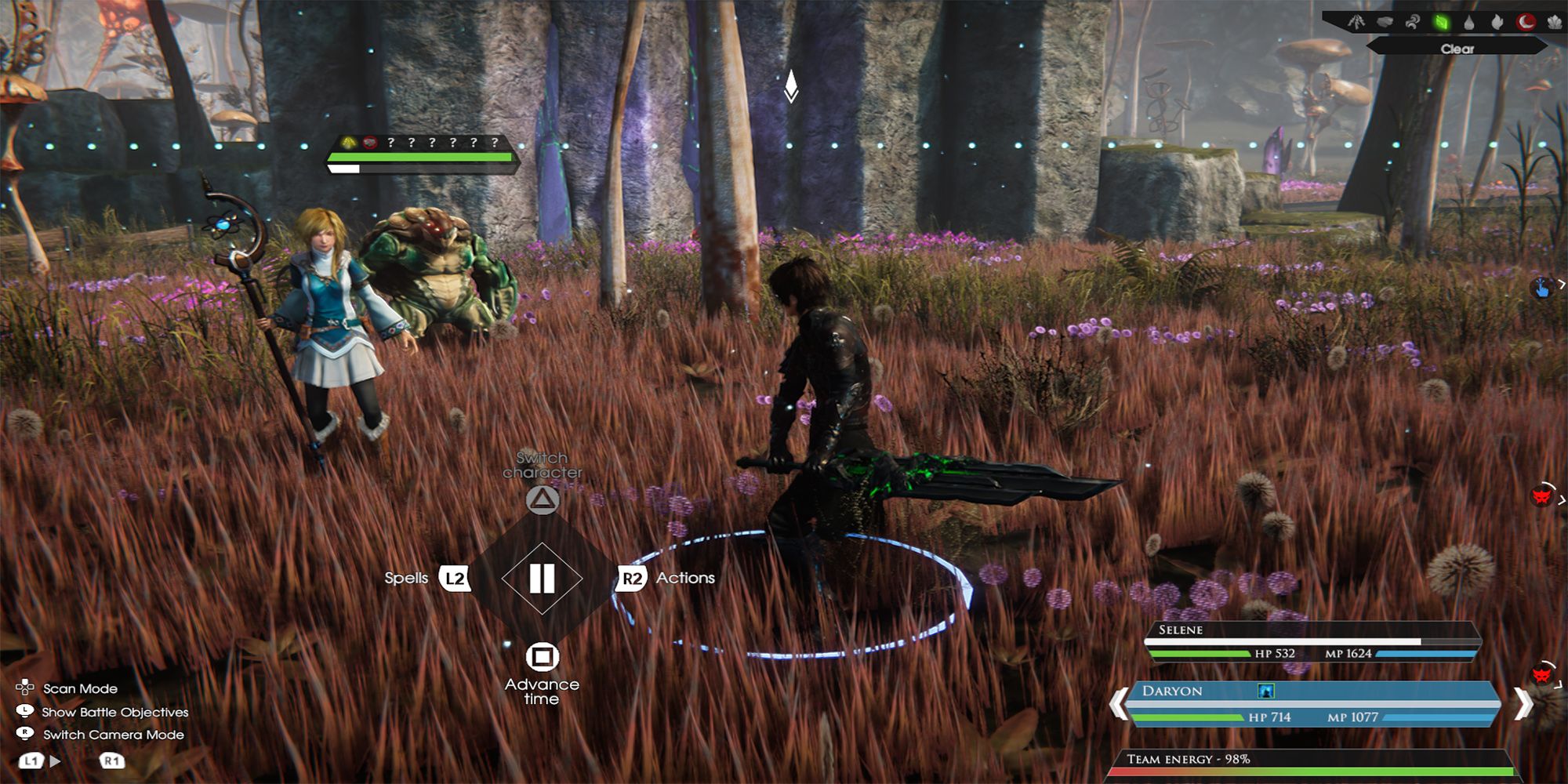 Edge of Eternity takes plenty of inspiration from the turn-based RPGs that came before it. So naturally, all the basic concepts universal to the genre are here. For reference, here are the three values you need to track. You can track them in the display located in the lower-right corner of the screen.

The battle menu presents a handful of choices when a character takes their turn. For instance, you can choose to speed-up time if you wish to fill another character's ATB. Additionally, if two or more of your characters are ready to act simultaneously, you can switch to other characters and play their turn first. However, you'll primarily use the Action and Spell menus. 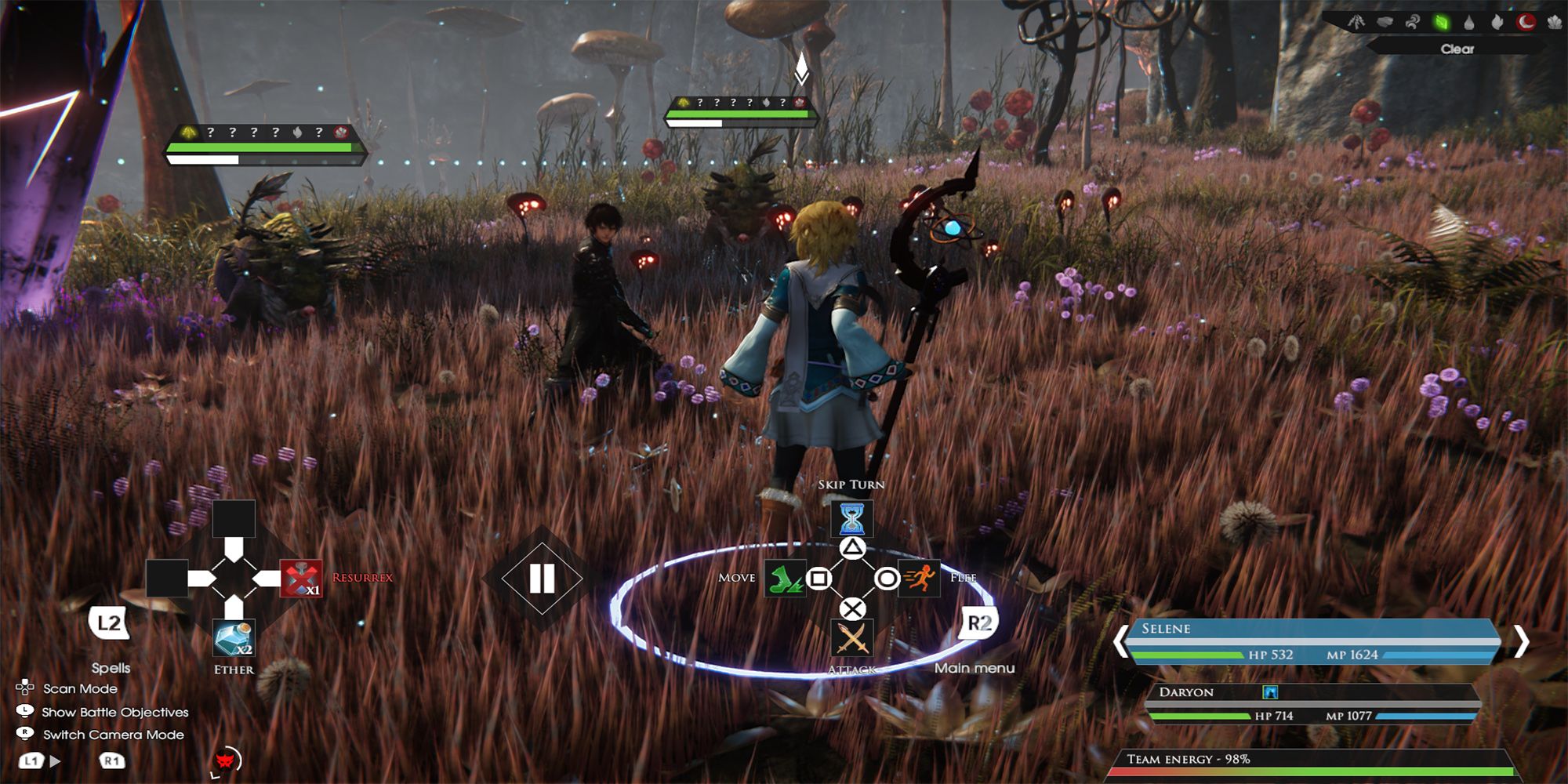 Actions have a range of different uses. For instance, you can access your character's basic attack from the action menu. Additionally, you can move your character to a different space on the hexagonal grid, skip your turn, or opt to flee a battle. Lastly, opening the action menu also opens your battle items menu. Battle Items are consumables, like potions and ether, that you can use a limited number of times per match. 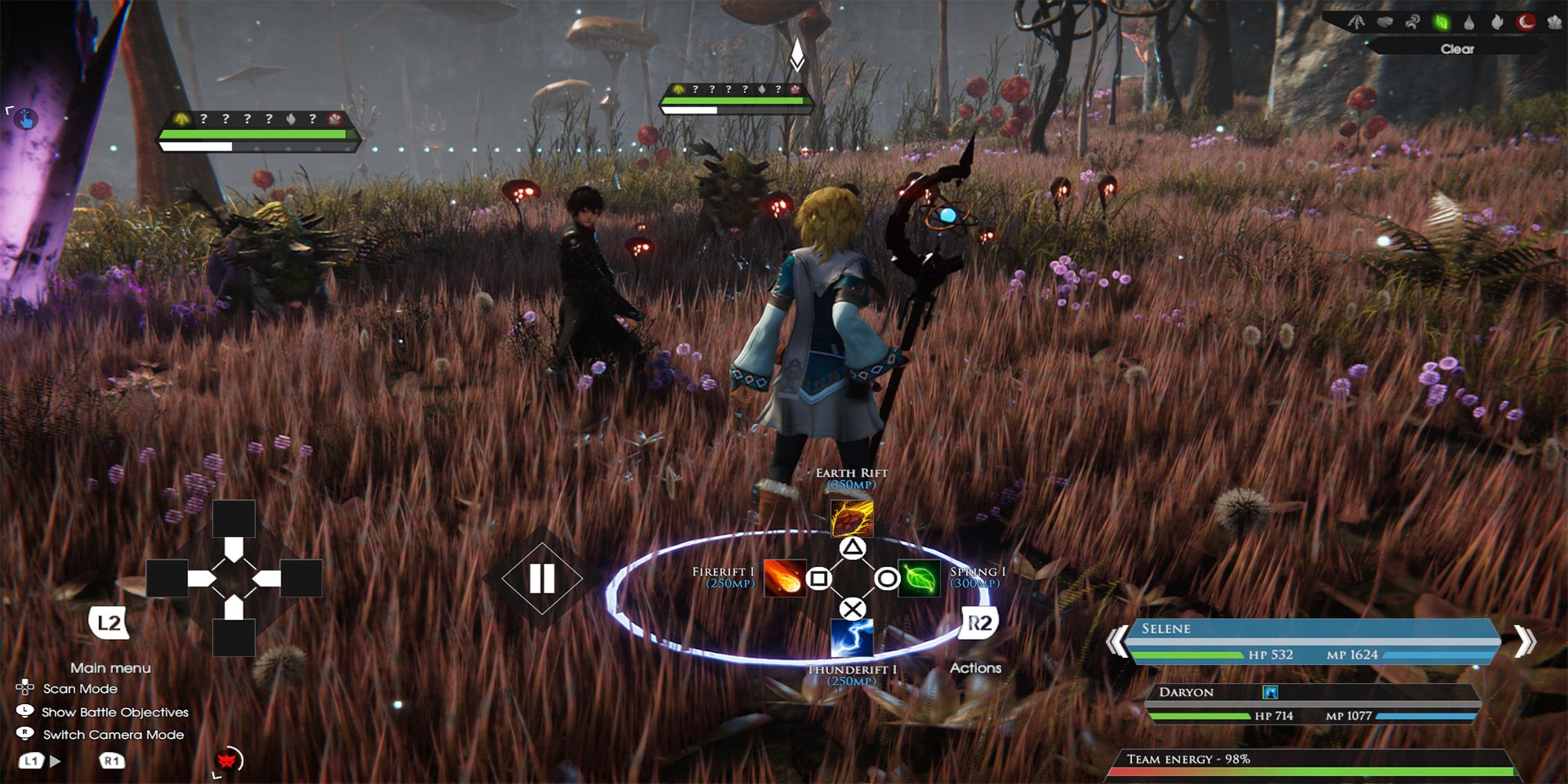 The spell menu is straightforward. Here you'll find the various elemental attacks equipped to your character. Spells have an MP cost and require more time to cast. After choosing a spell, your character must fill a red incantation gauge before the spell activates. 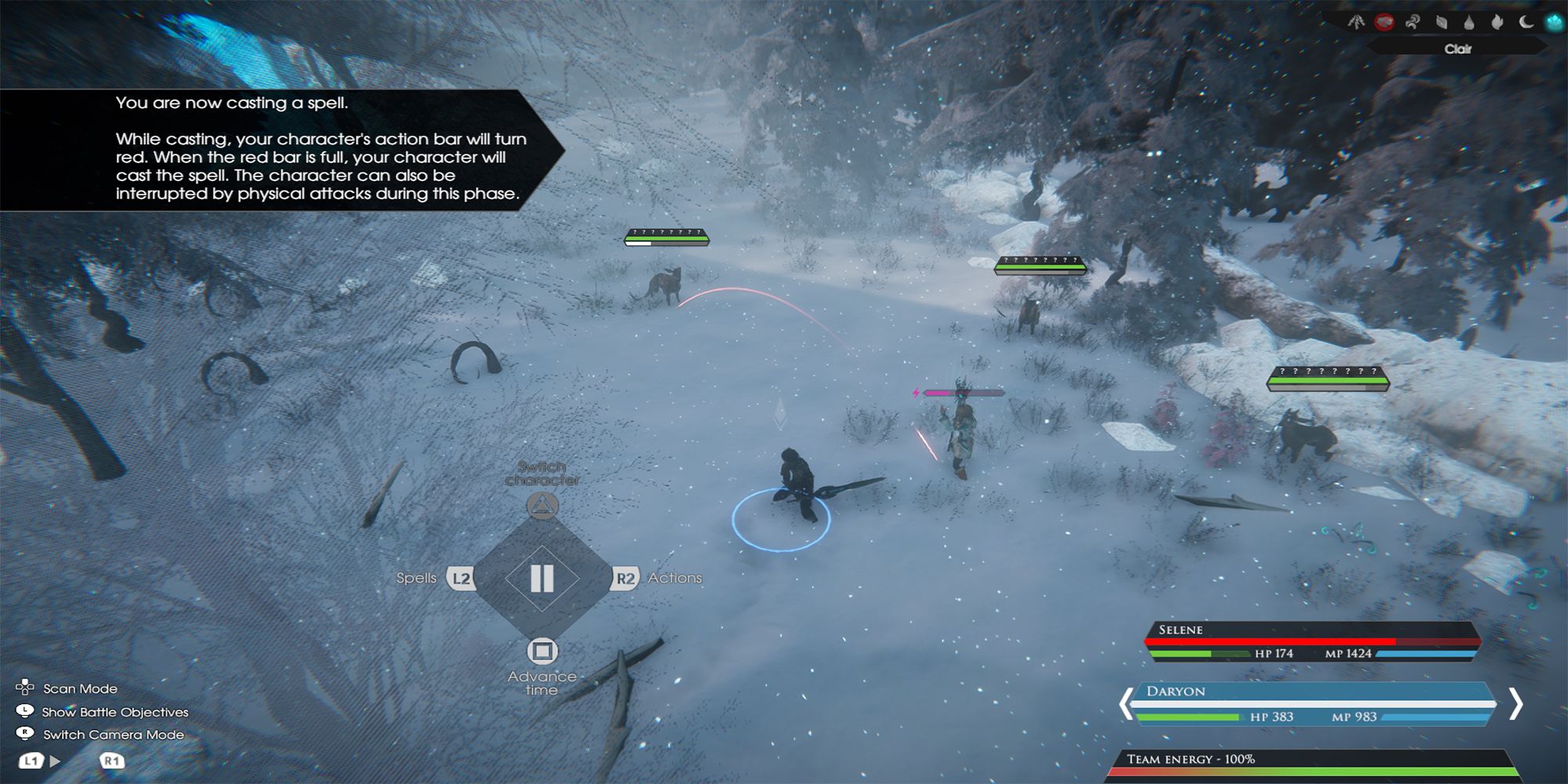 After planning your course of action, your character will perform that action, and gameplay continues to the next character with a full ATB gauge.

Moving Through The Battlefield For The Optimal Vantage Point 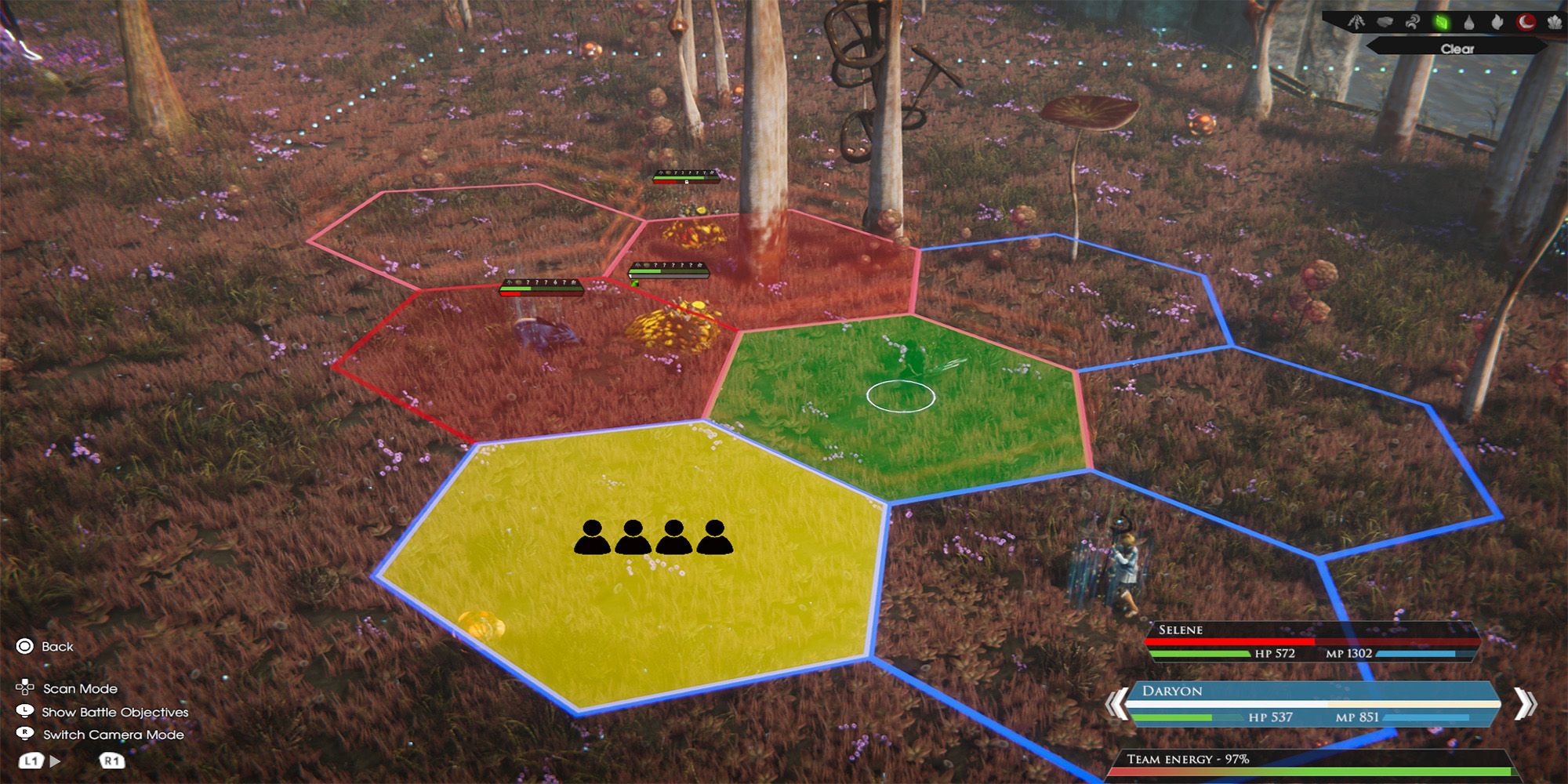 While plenty of turn-based RPGs have your party stand in a line like they're about to dance the hokey pokey, Edge of Eternity accentuates tactical movement. When switching into tactical view, you'll notice that battle takes place among a hexagonal grid. Utilizing movement opens a variety of strategic options. Here are some examples. 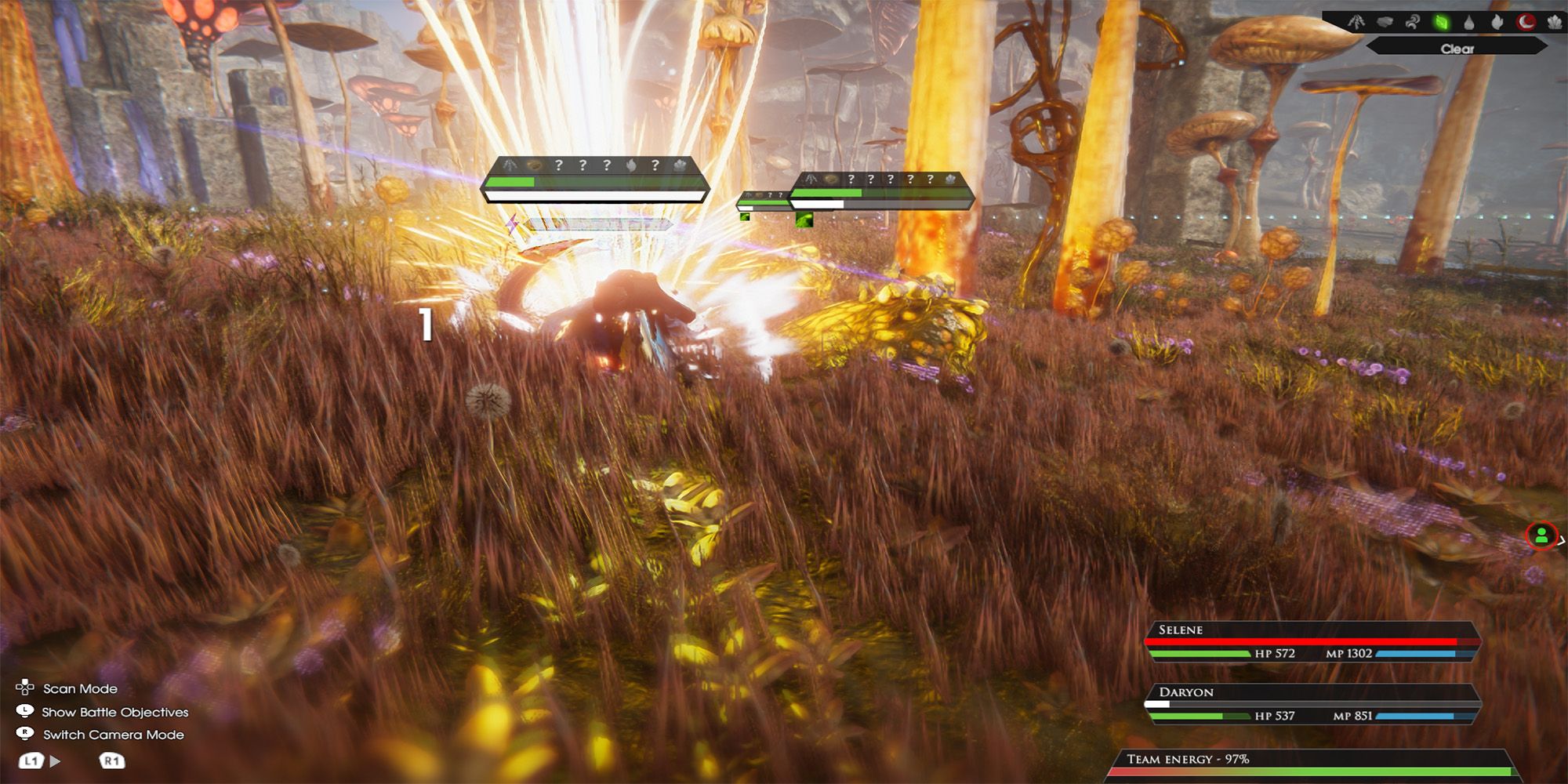 There are multiple ways you can defend yourself against enemy attacks in Edge of Eternity. We have already discussed how strategic movement can avoid attacks. But, what are some other defensive strategies available to you?

The only exception to this rule is when the incantation gauge has a padlock symbol. In this case, the attack cannot get interrupted.

Unfortunately, the same principles regarding incantation interruptions also apply to your party. Therefore, it's crucial to keep characters casting spells out of range from enemies. Otherwise, they can interrupt that character's spell.

Sometimes you will not have time to interrupt or move away from an attack. However, you can still defend against it. If you notice an incoming attack targeting your character, have the character skip a turn. Skipping a turn makes your character take a defensive stance, reducing damage from incoming attacks.

Pulverize Your Enemies By Learning Their Weaknesses 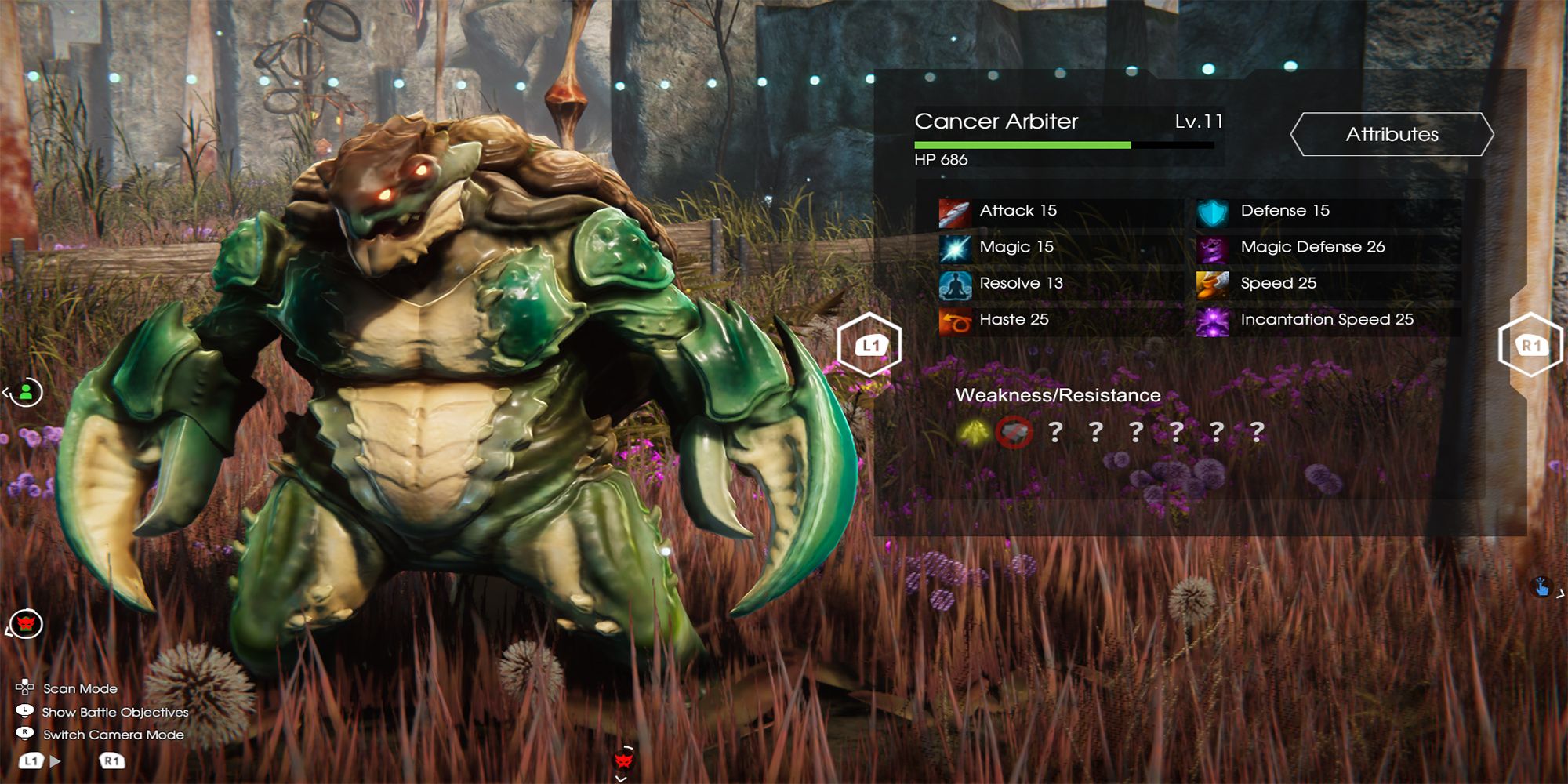 Like most RPGs, the enemies you fight in Edge of Eternity will have elemental weaknesses and resistances. However, you won't learn these attributes until you test them yourself with different spells in battle. Once you exploit an enemy's weakness or confront an enemy's resistance, the information will get added to your bestiary. You can also quickly view this information in battle while using the scan feature.

The crystal system restricts how many spells your weapon can equip depending on what upgrade path you use. Therefore, you should keep track of the enemies in your surrounding area while you travel. This way, you can manage your weapon upgrades accordingly.

For example, the ability to equip Spring, Fire Rift, and Earth Rift simultaneously may seem appealing. However, if your surrounding enemies are all vulnerable to thunder, choosing a weapon upgrade path that only equips you with Thunder Rift is better. Think quality over quantity.

Work With Your Environment To Gain Advantages In Battle 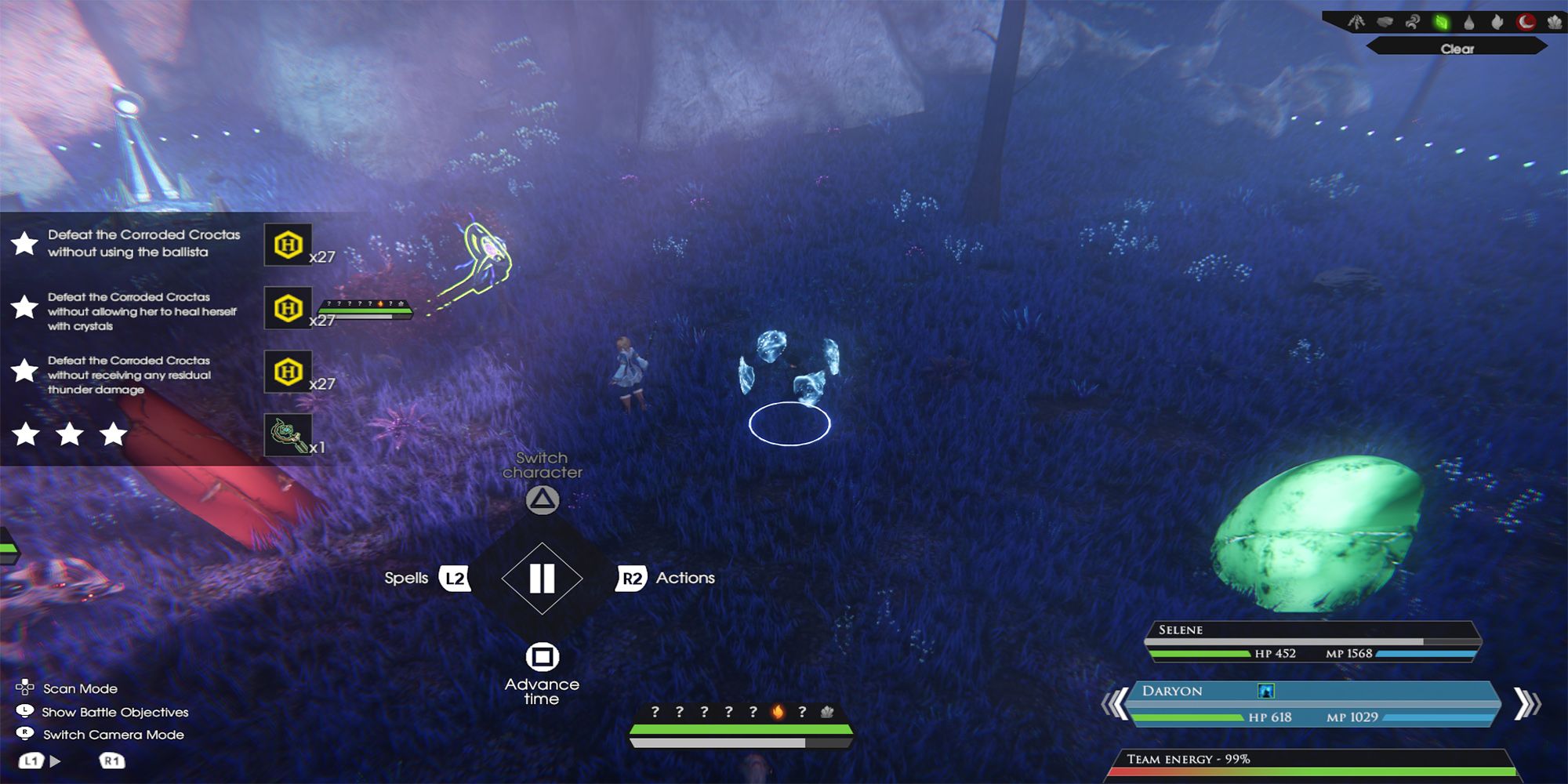 The environment dictates a lot of the battle conditions in Edge of Eternity. For instance, nearby objects can provide status buffs or ailments when you position a character in the same hexagon. Furthermore, you can use interactive objects, like a ballista, to damage enemies or alter the surrounding landscape. Moreover, even the weather changes what attacks work better in battle. 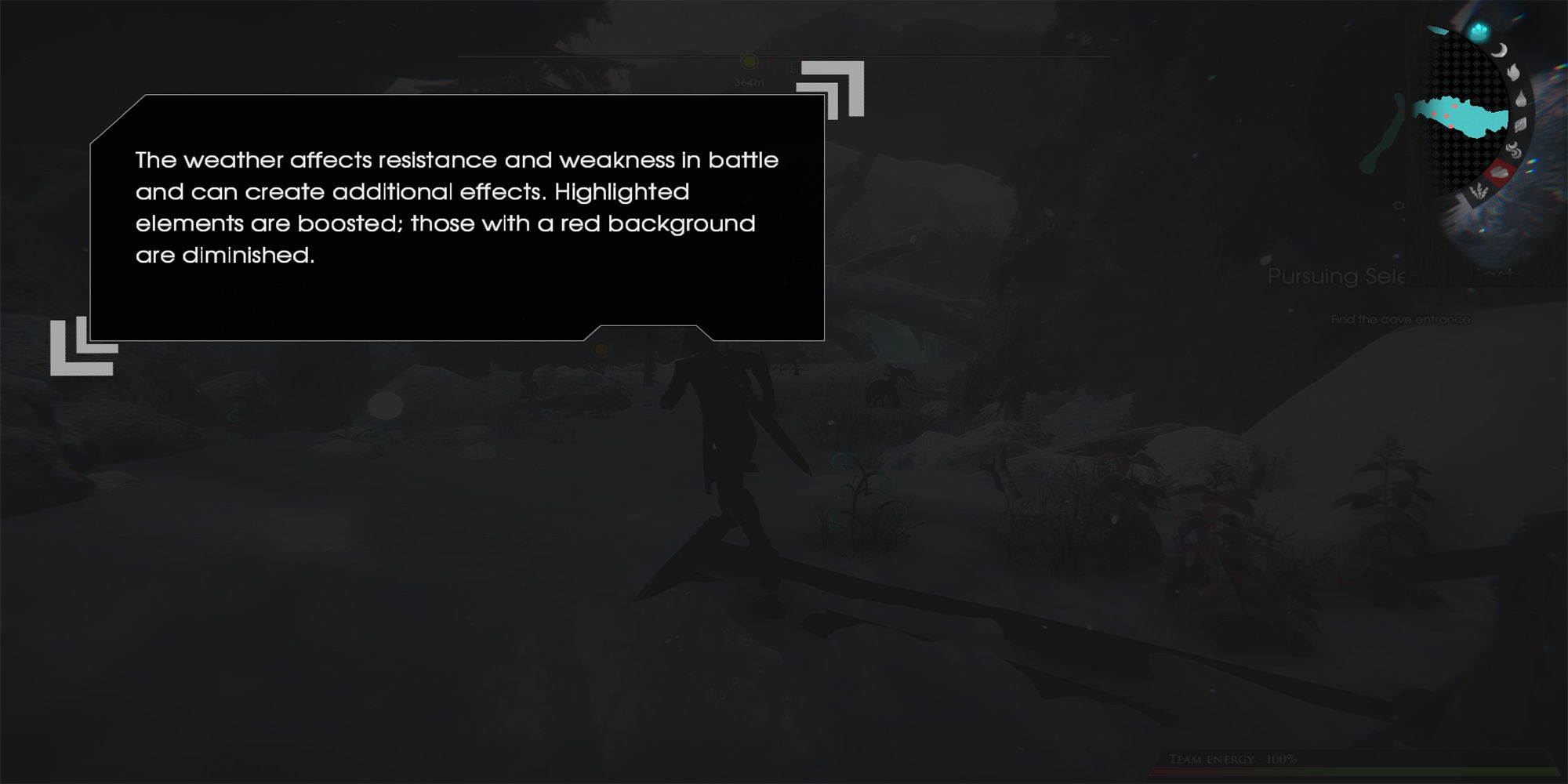 Did you know you can earn additional rewards in battle by completing specific missions?

Check out your battle objectives to see what tasks you must complete along with their accompanying rewards. These missions include taking a limited amount of damage, killing an enemy from behind, exploiting an enemy's weakness, and more. Fulfilling battle objectives can help you earn more heyr, consumables, or essential crafting items. 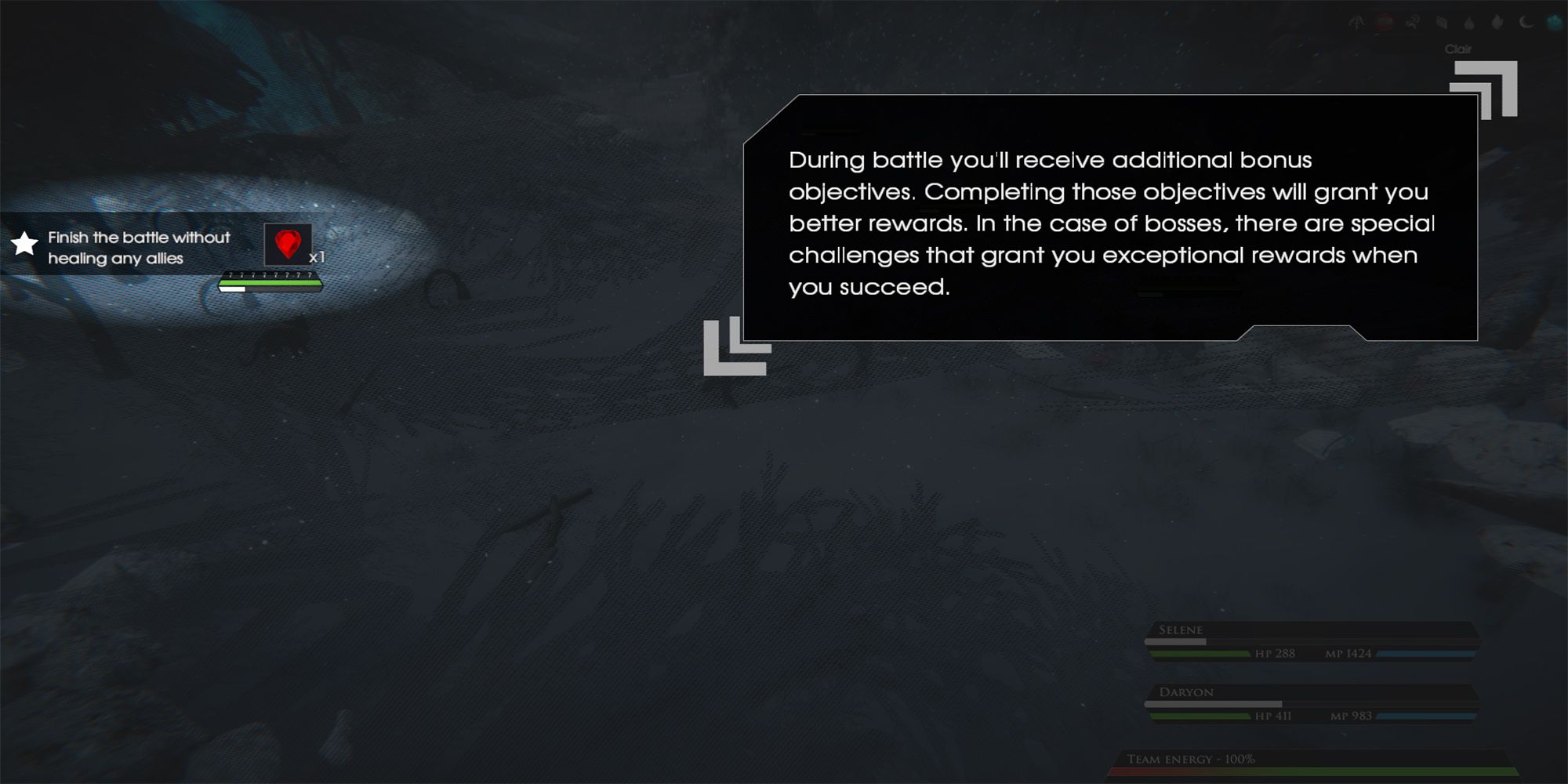