You are here:
Home / DNF Duel: Complete Guide To Online

DNF Duel has a surprising amount of content for you to dig through, ranging from a story mode for every character to a Survival mode to its multiplayer suite that there's always something for you to check out if you start to feel burned out.

Still, DNF Duel's Online Mode offers state-of-the-art rollback netcode, the classic ArcSys lobby system you either love or hate, and a solid Ranked Mode with a snappy and swift matchmaking system. Everything present in the multiplayer feels inviting and encouraging, making it easy to keep running matches, have a blast, and gradually improve while doing it. 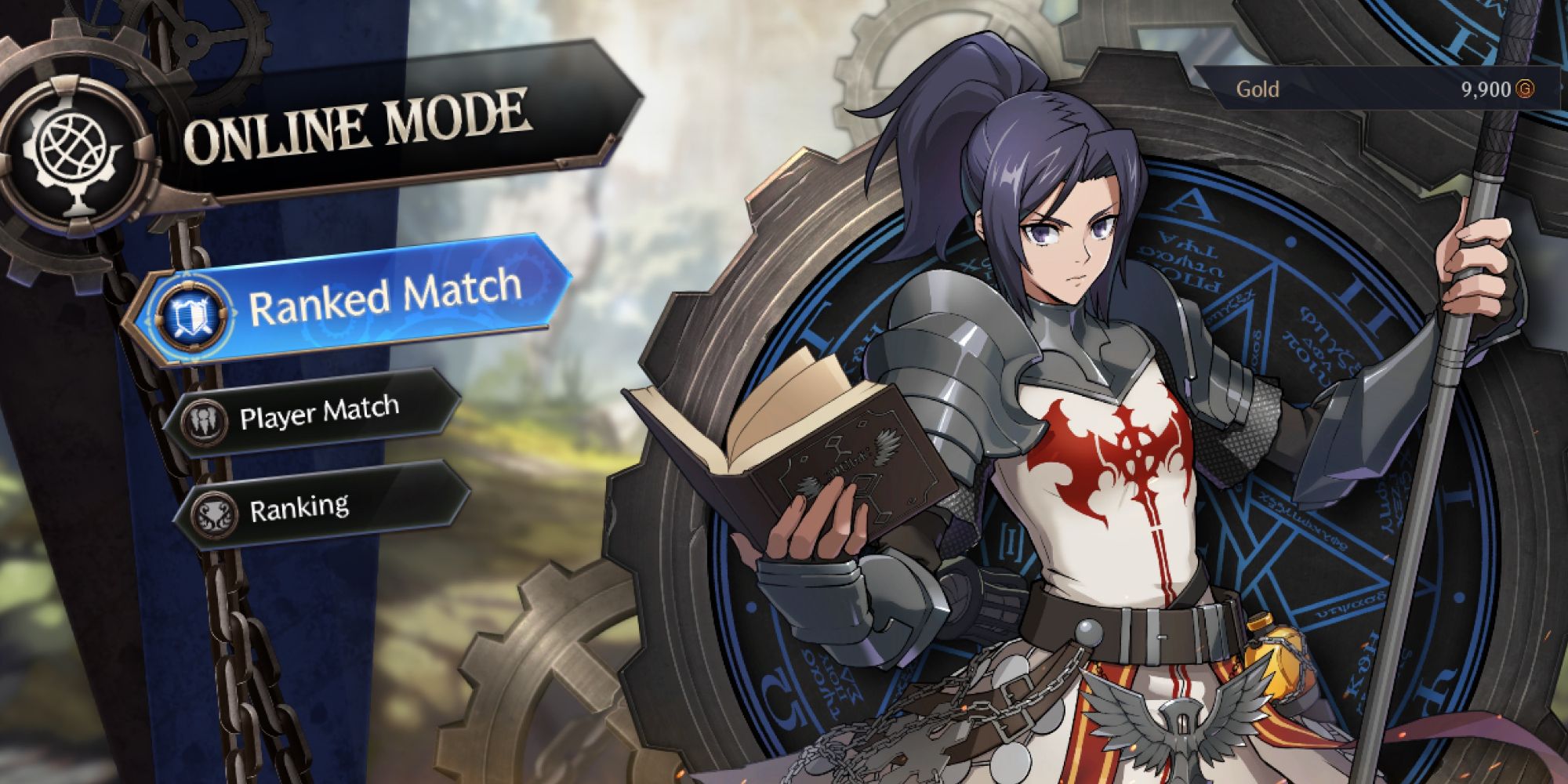 The Online Mode of DNF Duel allows you to match up against other players online. Many options here will allow you to narrow your search to your preferences, whether with complete strangers or with your friends in a private lobby.

If you enjoy the thrill of Ranked Play, where every match matters, then the Ranked Match mode is what you're likely for you. However, if you want to play just for fun or without the pressure of Ranked, you will find what you're looking for in the Player Match mode. We will cover these in greater detail later but will shift our focus to crafting your unique profile so you can express yourself in said lobbies. 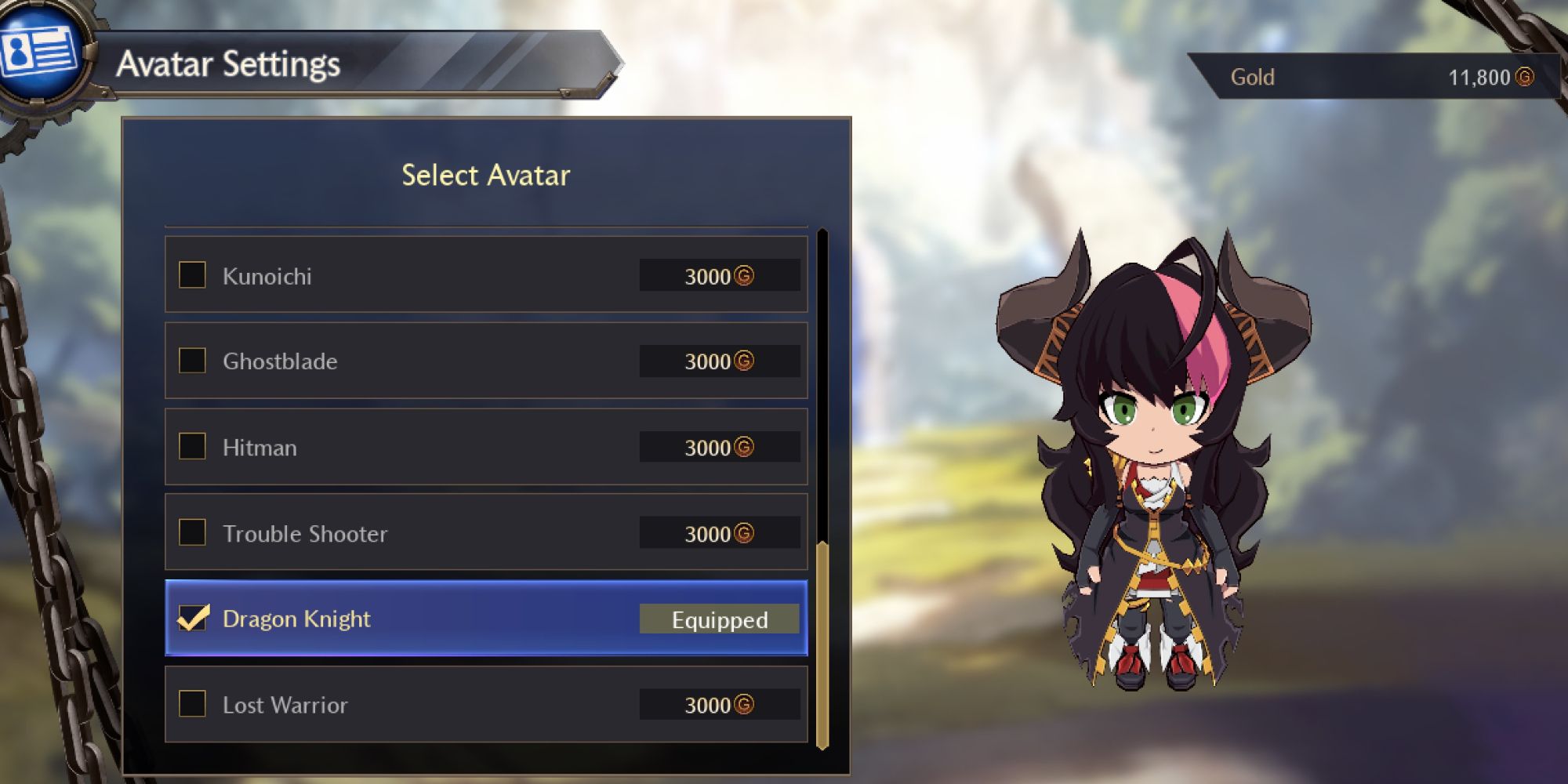 Avatars are only visible in the game's Player Match Rooms but are an excellent way to express yourself as you can roam around a lobby as your favorite character in a cute chibi form. While this lacks the "character creator" in most ArcSys titles, it's still awesome loading into a lobby and seeing who everyone chose as their character.

Each Avatar costs 3,000 Gold, which you can earn by playing online matches or participating in the game's offline content such as Story or Survival. 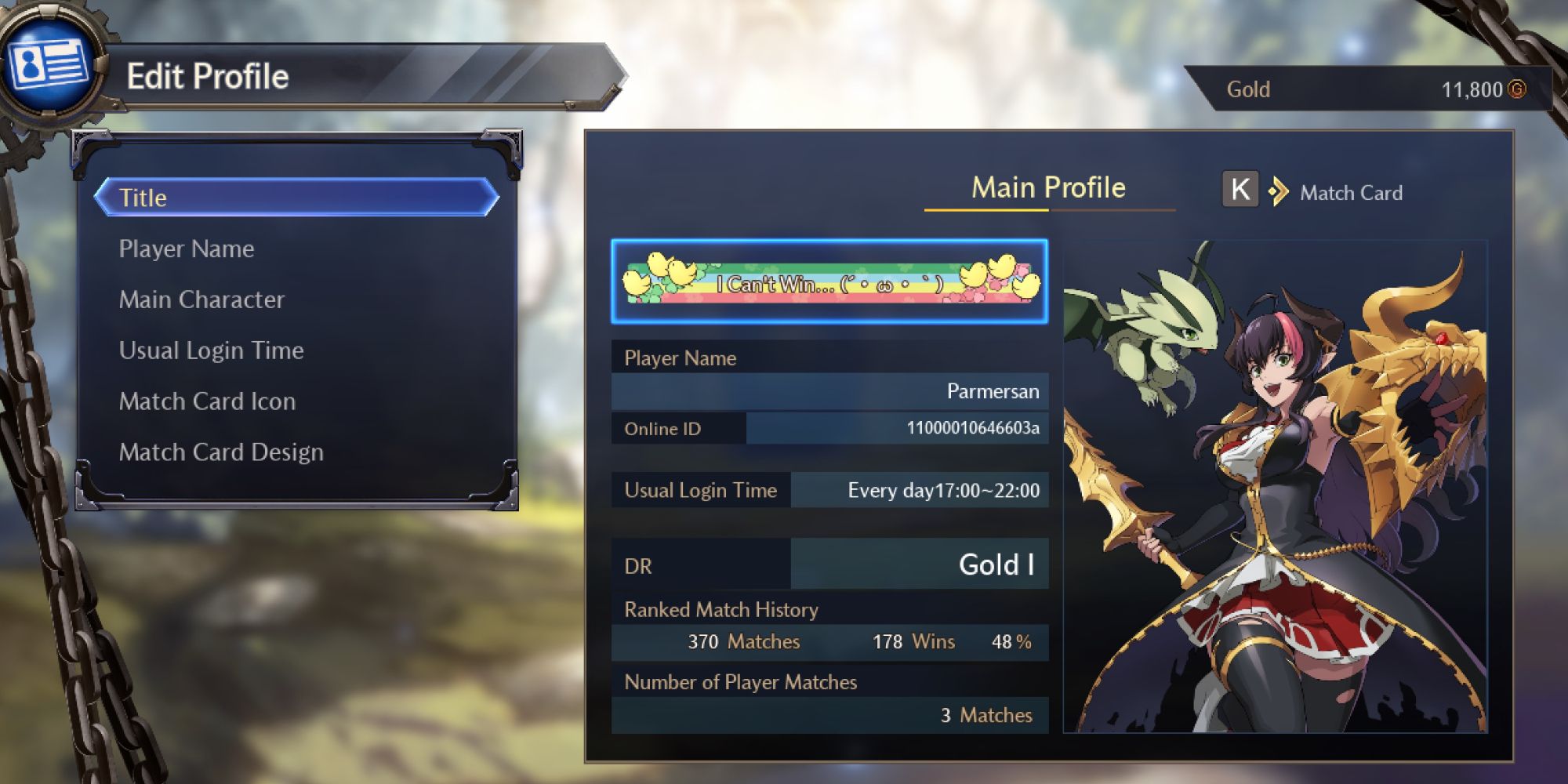 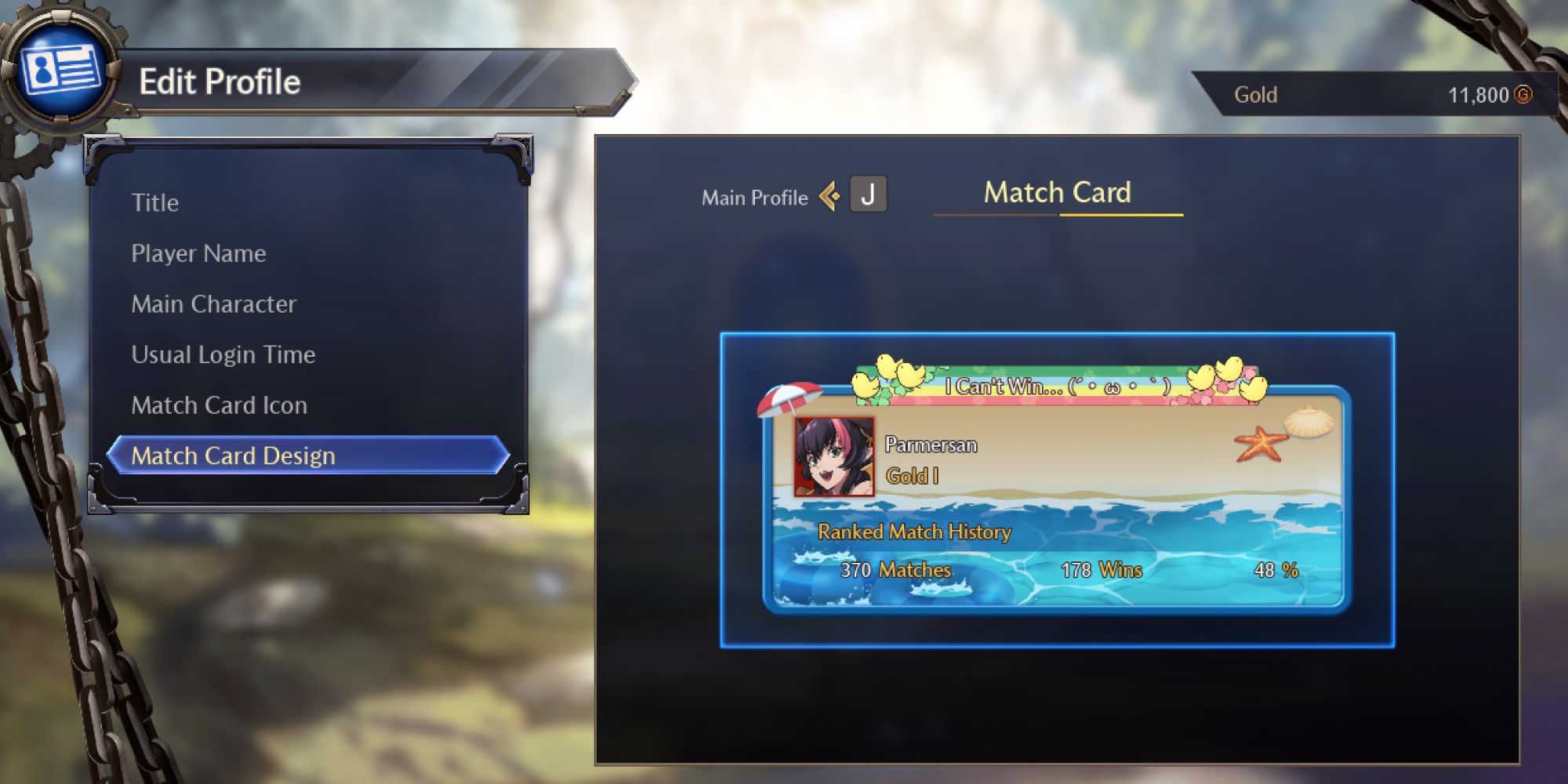 Please ignore my terrible Ranked Win Percentage and focus your attention on the decent level of customization options you have at your disposal to spruce your profile up for online play. Edit Profile allows you to personalize your overall profile sheet and Match Card, making for clever ways to showcase your personality in a compact form before the start of a match.

There are well over hundreds of Titles for you to select, some unlocked right off the bat, others for meeting milestones with specific characters (like winning 100, 300, and 1,000 matches), and much more. These titles can have colorful backgrounds and quirky sayings or look incredibly cool and have aggressive phrases on them and anything in between, allowing you to find something that fits your playstyle and personality. While we wish we could mix and match some of the captions with other backgrounds, what's here is pretty great for the most part.

You can also change your display name at any time and even set the time of day you're typically on the game, which can be helpful if you're trying to meet fellow DNF Duel players and want to run matches together during your free time. Furthermore, you can also select your Main Character here, which will change the large portrait on the right side of your Main Profile. This won't affect who you play in Ranked or Player Matches, though (we will touch on that a bit later).

Finally, we have your Match Card, which will always be displayed as you wait to load into a match. A Match Card will display your Title, Ranked Match History (if you play Ranked), and your Match Card Icon and Design. There are 47 Icons to choose from, which include everything from traditional character portraits to chibi versions to even random NPCs you meet in the story mode. There are also 17 Card Designs to choose from as well. Most of them are plain colored backgrounds, though some are pretty cool looking and have more intricate designs, such as the beach one pictured above! 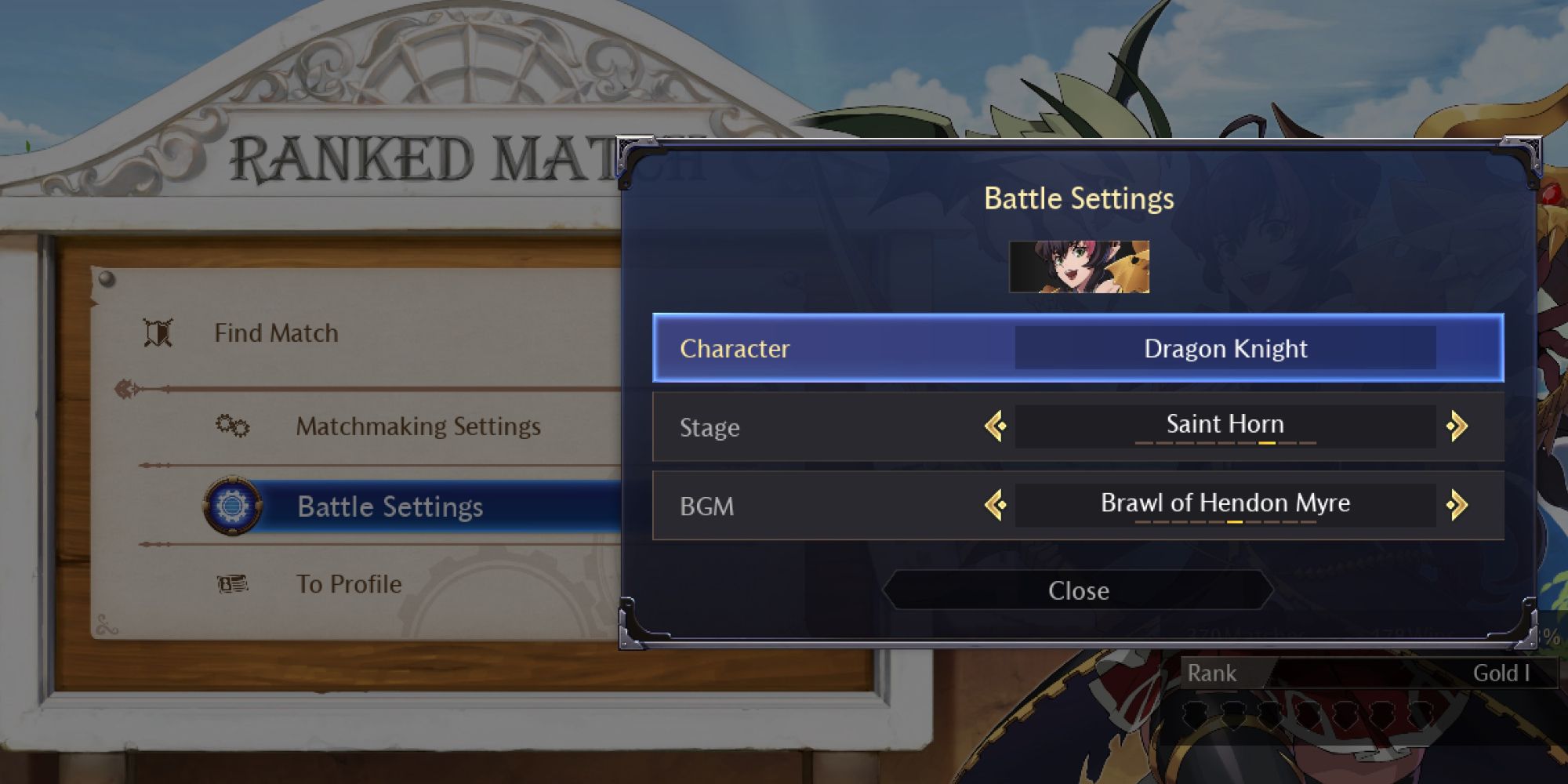 The last thing we want to cover, while located in a different menu, is your Battle Settings. This will allow you to select your default character, stage, and background music, which is essential for Ranked Mode or Player Rooms that don't allow you to choose your character pre-match. We will go over how to set your Battle Settings up in both Ranked and Player Matches below:

Battle Settings are not shared between Ranked and Player Matches, meaning you will have to adjust both to your liking if you plan on playing both modes. This is a crucial thing to set up, especially in Ranked, as you do not want to get thrown into a match as the wrong character. 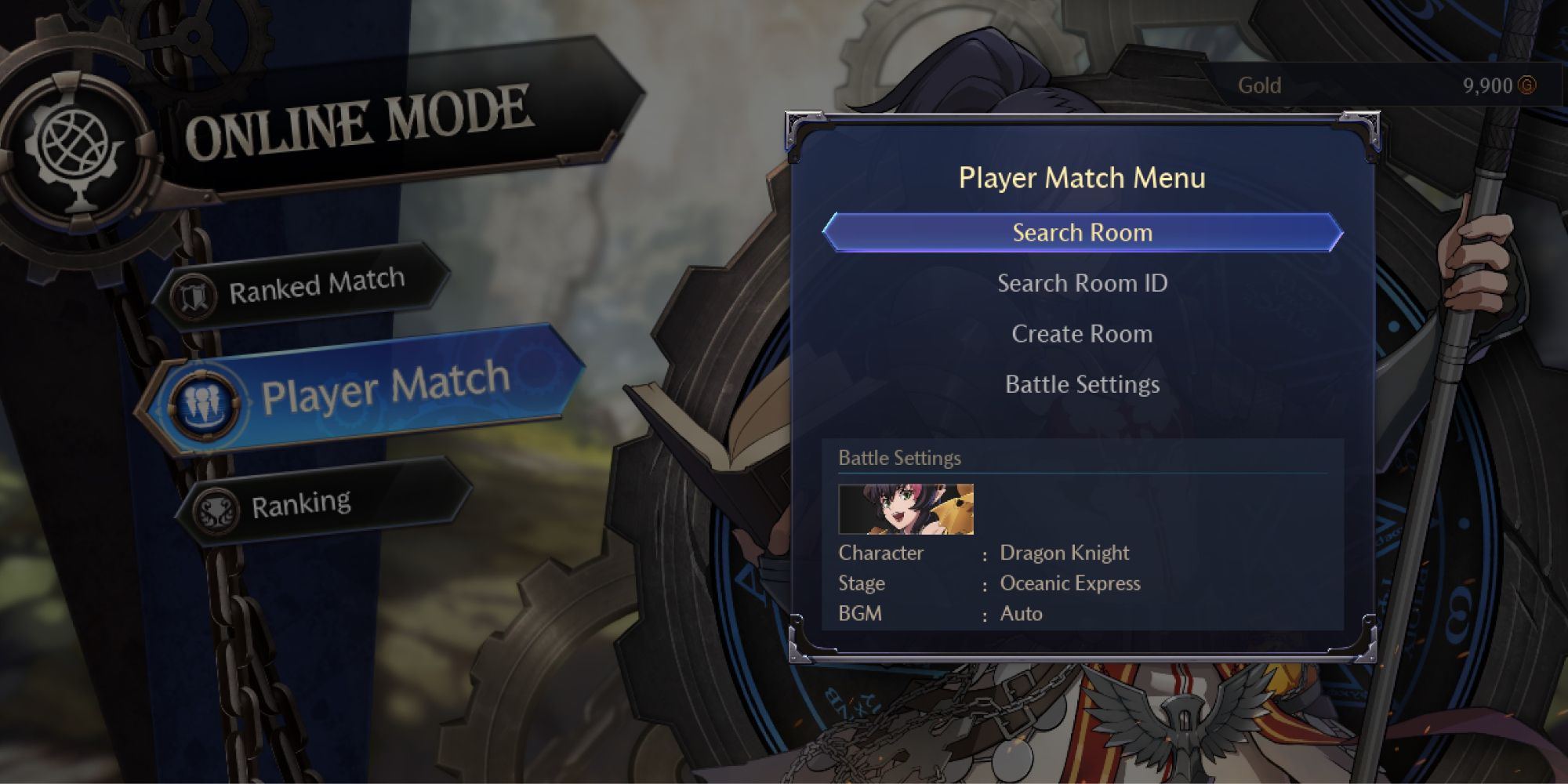 As already covered, Player Matches are the more "laidback" matches in DNF Duel. They have no impact on your Rank, allowing you to test strategies or characters without worrying about getting demoted. To learn more about Player Matches, continue to the section below! 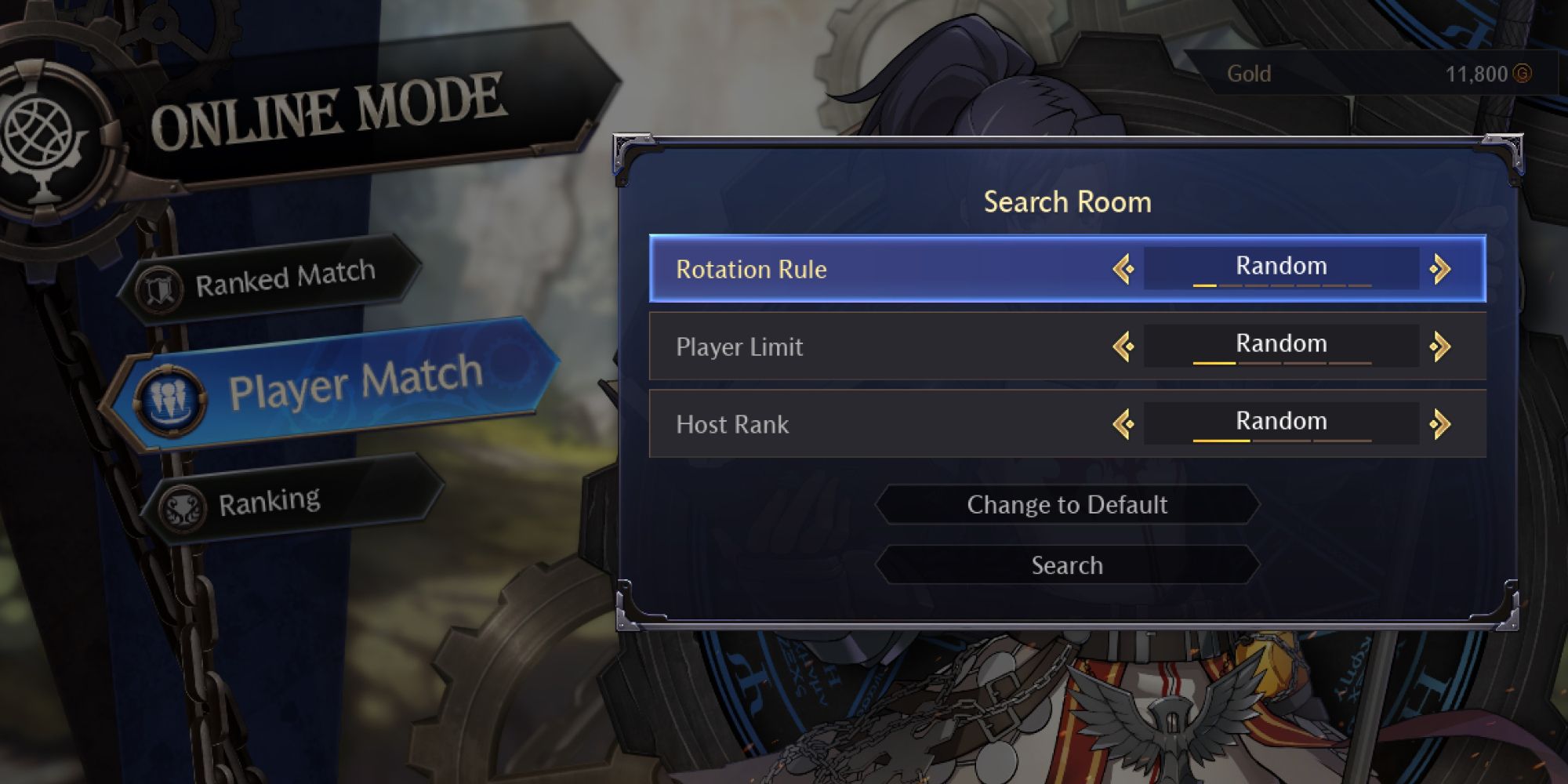 Searching for a Room/Lobby in DNF Duel is quite simple, if not a bit limiting. You can set parameters such as the Rotation Rule if you want the loser of the match to be forced off a machine, set the Player Limit if you prefer smaller or larger lobby pools, and even choose the Rank Gap (Host Rank) of the host to find similarly skilled players. Once you have everything the way you want, you can begin searching for rooms, which will display a list of available lobbies that meet your search preferences, allowing you to choose the one that's best for you. 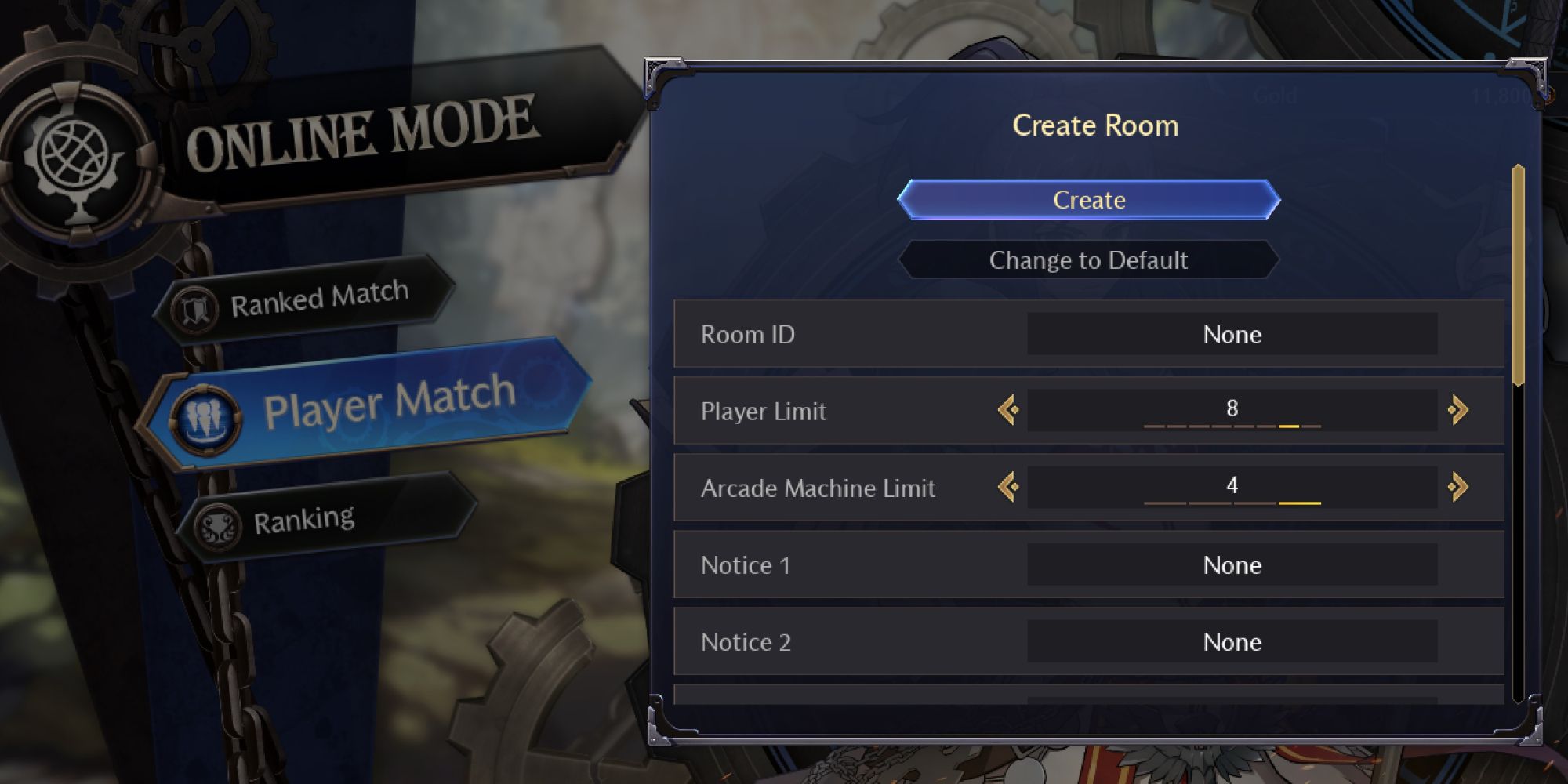 Ultimately, if you want a lobby with very specific settings, you might have to host one yourself, which isn't all that difficult. Creating a room will allow you to set all sorts of parameters and finetune your lobby to your precise liking. You can change the overall Player Limit of your room, the Rotation Rules, Match Limit, and even disable Character Selection, forcing players to use their Main Character (Battle Settings). There are many more settings here, so we suggest taking a look at it yourself to see its potential. 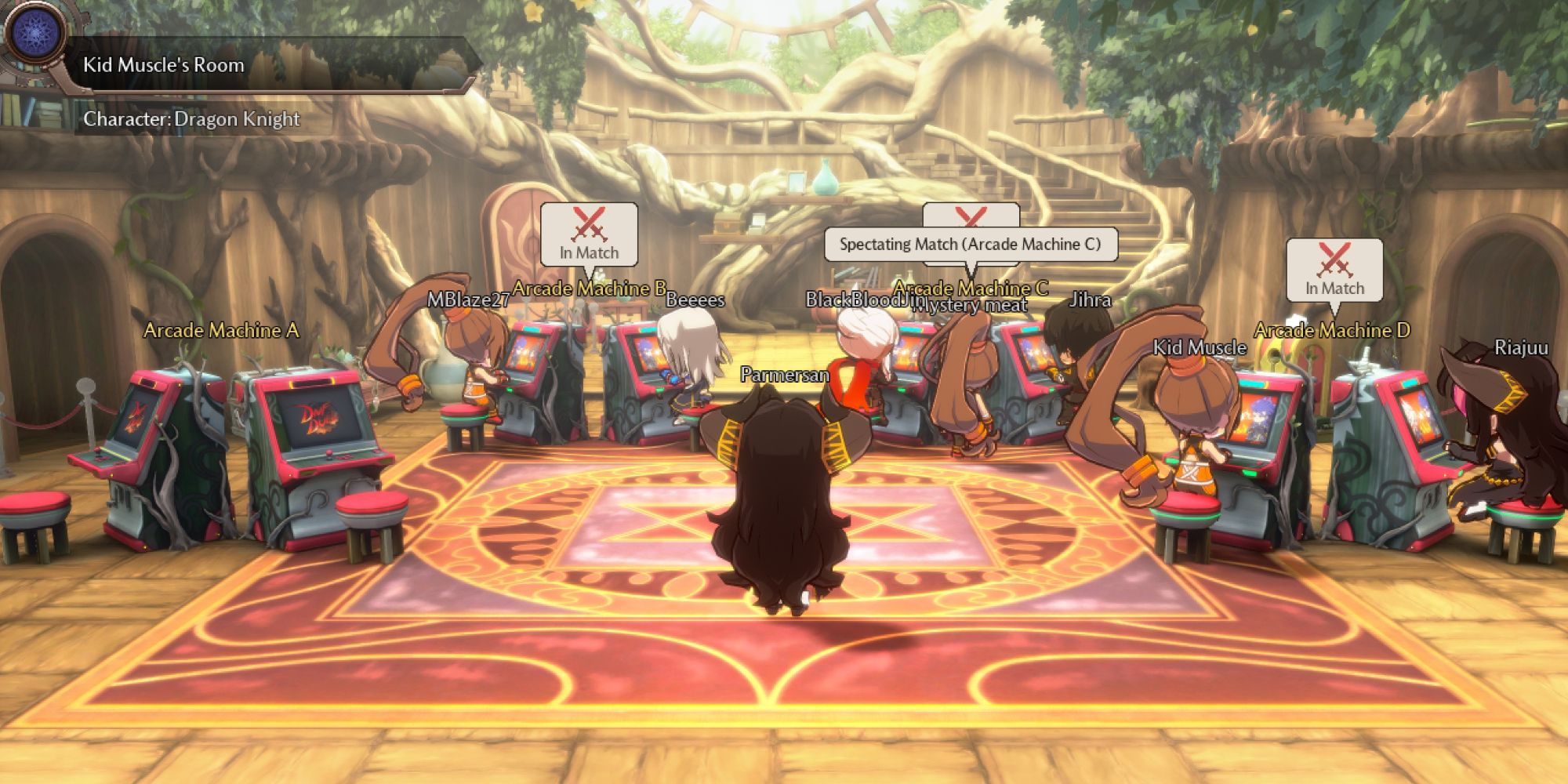 Lastly, here's a quick look at how Rooms operate in DNF Duel. As covered in the Online Overview section of this guide, you are allowed to customize your profile to some extent by selecting a chibi-fied version of your favorite character as your Avatar. Once you are finally loaded into a Room, you can move around freely as your selected Avatar and interact with other players or sit down at an Arcade Cabinet to face off against someone. And that's pretty much the extent of Rooms in DNF Duel! Simple, right? 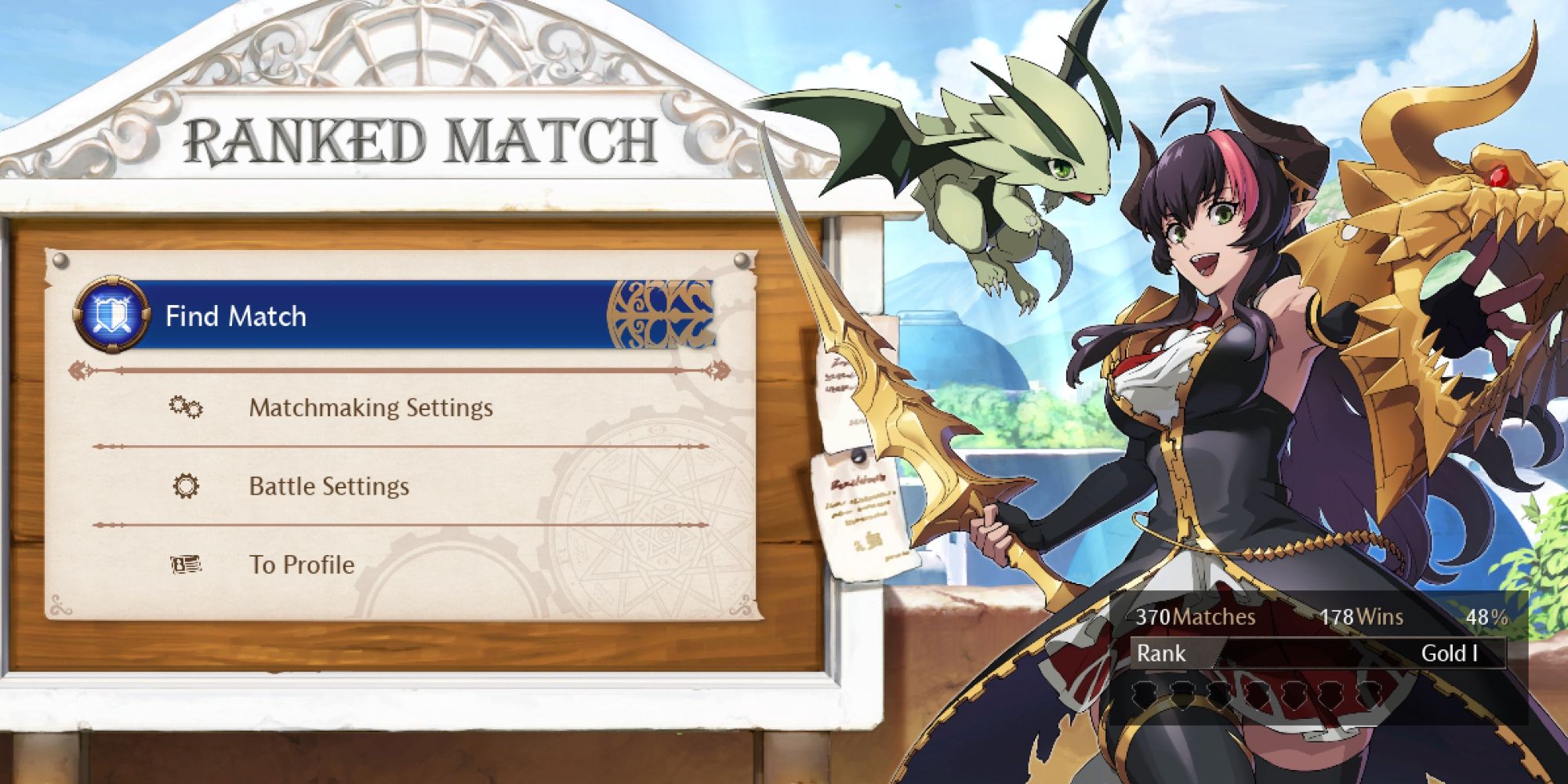 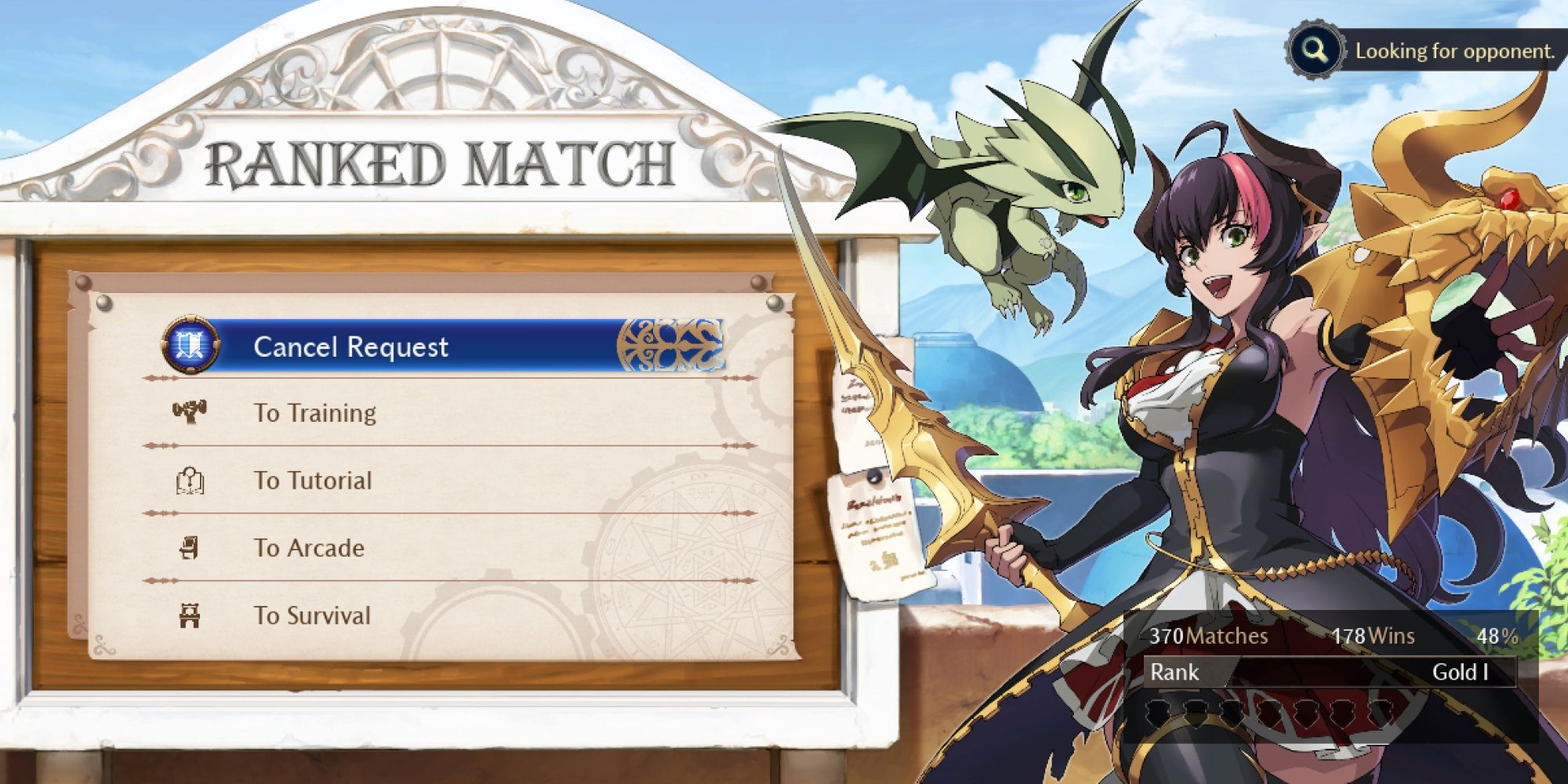 Ranked Matches are a completely different beast than their Player Match counterpart, making it seem a bit more daunting to some than it actually is. You will likely notice that the Room/Lobby system is not present here. This is because the game will search for players in the same skill range as you (typically in your Tier Grouping) and place you into the first available match, hopefully placing you in a match against someone of equal skill.

The lack of a Room/Lobby system gives you several other things to do as you wait to find a match. You can hop into Training Mode and practice on a Dummy, try your hand at combo trials in the Tutorial Mode, beat up on a CPU in Arcade Mode, or see how long you can last in the game's Survival Mode. Once a match is found, you will be notified and will have a short time to accept or decline the match. 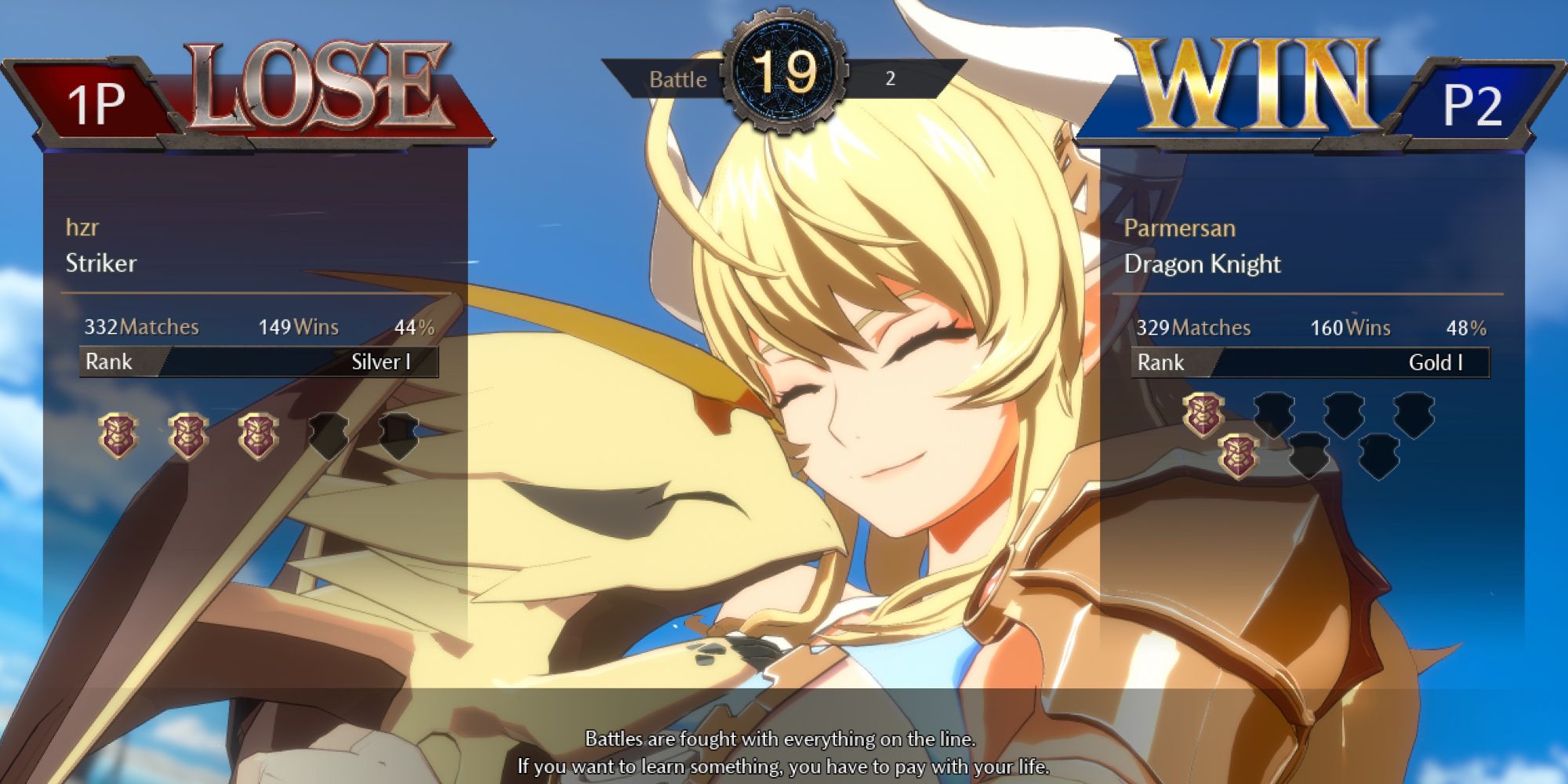 Your overall goal in DNF Duel's Ranked Mode is to climb through several tiers and become a Deity, the game's highest rank. Depending on your skill, you can either start at Bronze, Silver, or Gold and will have to work your way through the other tiers from there. This will take tremendous amounts of time and will require lots of effort and skill on your end to accomplish.

Each Rank Grouping (Bronze, Silver, Gold, Diamond, and Terranite) has four Tiers, requiring you to win to progress through them. In the picture above, you will see Crests under each character's Ranked Match History. Some Crests are solid, while some are just mere silhouettes. Each time you win a match, you will earn a Crest, bringing you closer to the next Tier. However, losing a match will take a Crest off the board, having you earn it back.

Furthermore, you will have to fill in all blank Crest slots, then win one more match to move onto the next Tier. So, as an example, Gold has seven spaces for each of its Tiers. You will need to win eight games to progress through each one. This also works when facing demotion as well. To be demoted in DNF Duel, you will have to lose all Crests from the board and then lose one more match, which will send you to the Rank Grouping or Tier below your current one.

If this seems like a lot, you aren't wrong, as the win requirements get more demanding the more you climb the ladder. However, the one saving grace here is Win Streak Bonuses, which will give you two Crests per win instead of one, allowing you to progress through Tiers double the time if you can keep your hot streak up. While hard to do, especially for beginners, you are bound to catch fire once you familiarize yourself with the game (I even went on a 15-game win streak once). If you keep at it, you can go on long win streaks and fly through the lower Rank Groupings! 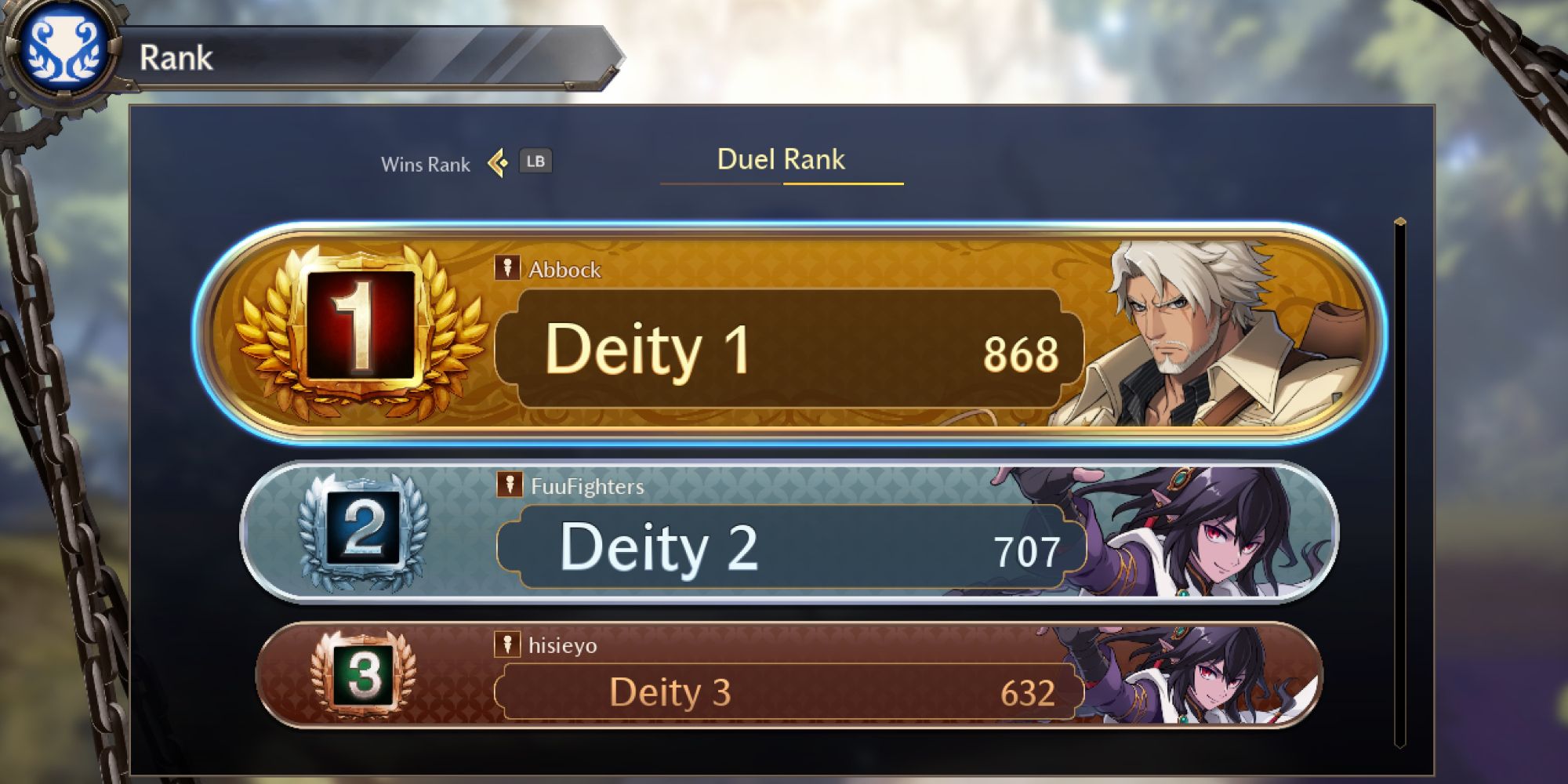 Below is every Rank Grouping along with their Tiers and information on how to progress through each of them. There are many Ranks in DNF Duel, meaning it will take quite some time to become a Deity!