You are here:
Home / Disgaea 6 – Best Places To Power Level

It might not seem like it at first, but Disgaea 6 is a game that loves to make you grind. It doesn’t matter what you are doing, it will help you grow stronger, and you will likely do that thing hundreds – if not thousands of times before the game ends. We aren’t just talking about the story mode either.

Disgaea 6, like most games in the series, doesn’t want to end. You could finish the story, only to be greeted with an entirely new story. Or maybe a third story after that. What about an entire new hyper-difficult dimension? How about an even harder hyper difficult dimension? The list goes on, and on, and if you want to do it all, you need to level up effectively.

Use The Cheat Shop 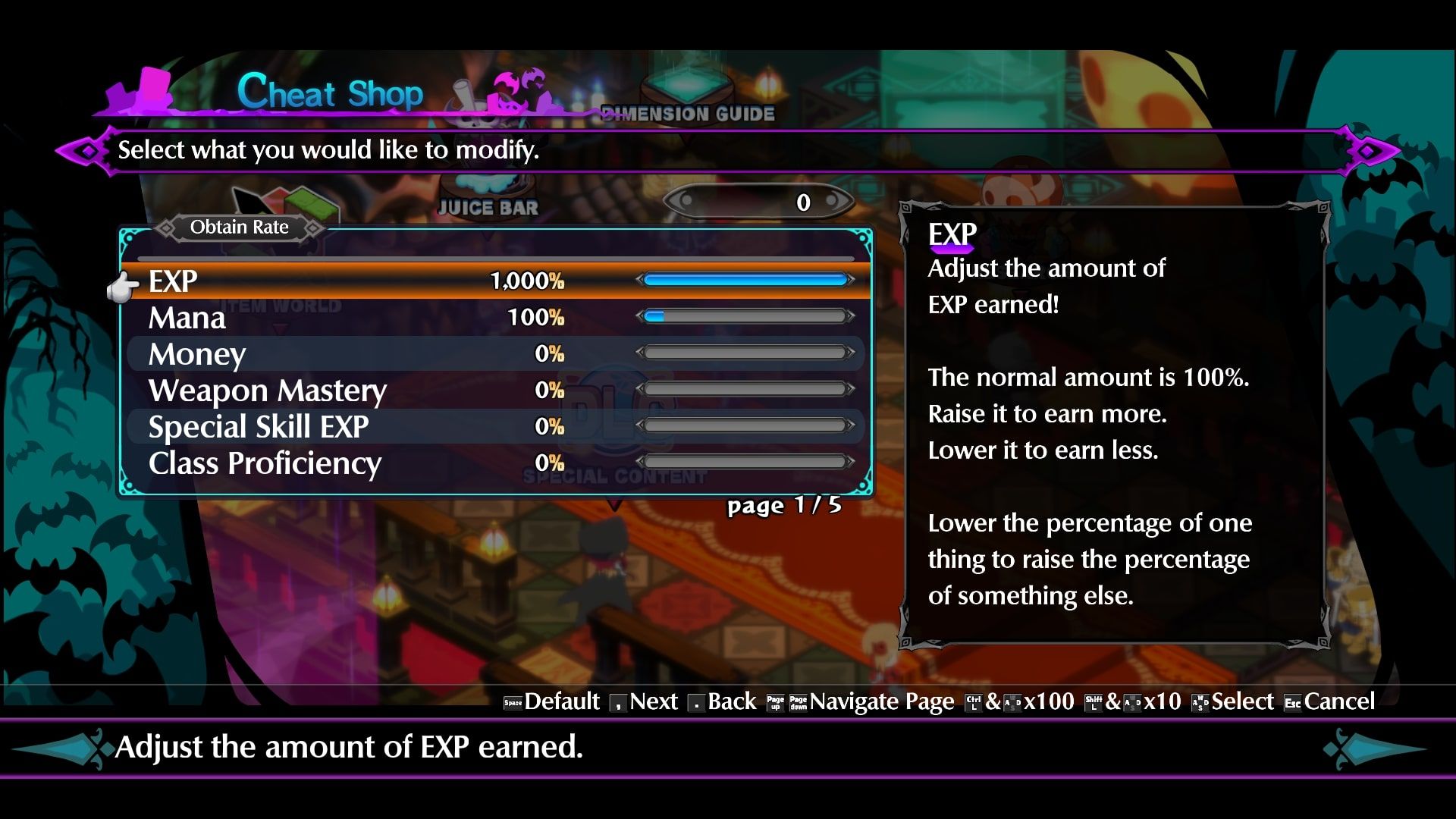 Before we get into maps, you need to understand how to set yourself up for success. The Cheat Shop is the way to do this. Crank that EXP bar as high as you can (it caps at 5000 percent during the end game), and be prepared to increase the enemy difficulty to +20 over time. This will maximise your EXP gain, and make low-level areas viable grinding spots well beyond their logical irrelevance. 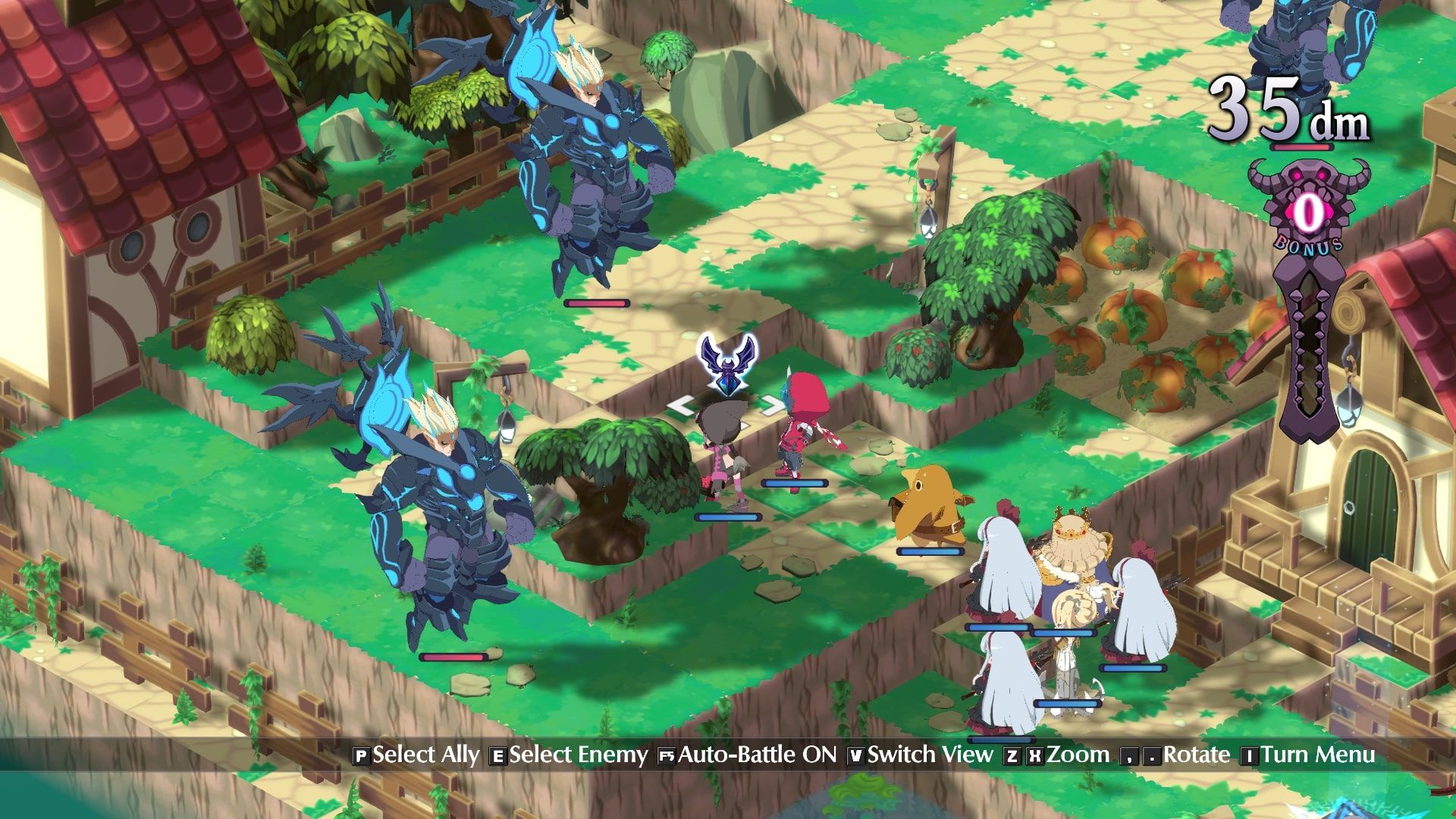 Disgaea 6 is very forgiving during the main questline. That doesn’t mean it’s not fun to one-shot literal gods and trivialise the game, of course.

This is the best place to level up in the early game. It is set up perfectly to allow for quick grinding, it has favourable geo-panels, and you can blitz through hundreds of times an hour. Just set it away, and have fun. In the early game, you can very quickly get your characters over level 1000, and if you continue to mess with the difficulty, you can eventually hit level 9999.

Rich Man’s Plaza is very good, but it is almost immediately outclassed by Royal Chamber 2. This stage has you fighting a single EXP Lucky Board. This enemy deals next to no damage, but has incredibly high defensive stats. You want to slowly ramp up to +20 Star difficulty and lay into this thing. You can easily hit the level cap by doing this.

Royal Chamber 2 is all you need to gain incredible boosts in EXP. If you can stomach it, however, Overlord’s Keep – Griffon Chamber is even better. You get all the benefits of the Royal Chamber, in addition to bonuses to Mana and HL. You will hit the level cap faster to boot.

You come here to grind anything you need. If you want HL, change your Cheat Shop bars to gain more money, and get killing. Same with Mana. Very handy mid/late game spot.

This is the best place to grind in the game – well, it is until you get thrust into the ultra-hard post-game content. There is a trick to this, however. In the Cheat Shop, you need to turn on Back To Square One. This will replace all the enemies on this map with much more powerful, much more valuable Gods of Destruction. Five to be exact.

At +1000 percent EXP and maxed difficulty, you will be gaining about 150 million EXP a run. This is just about enough to hit the level cap in a single run. Once you get to this point, you can Reincarnate endlessly if you wanted to – although due to the lack of Karma, this probably isn’t the best thing to do.

This map, in various forms, will be your go-to map for EXP for most of the game.

It may be more effective to run this map at a lower difficulty if it takes too long for auto-battle to get through it. Being able to run this map quickly is better than taking 5x longer to run it, and gaining EXP ineffectively. At 20-Star, you should be earning 100M EXP a run. 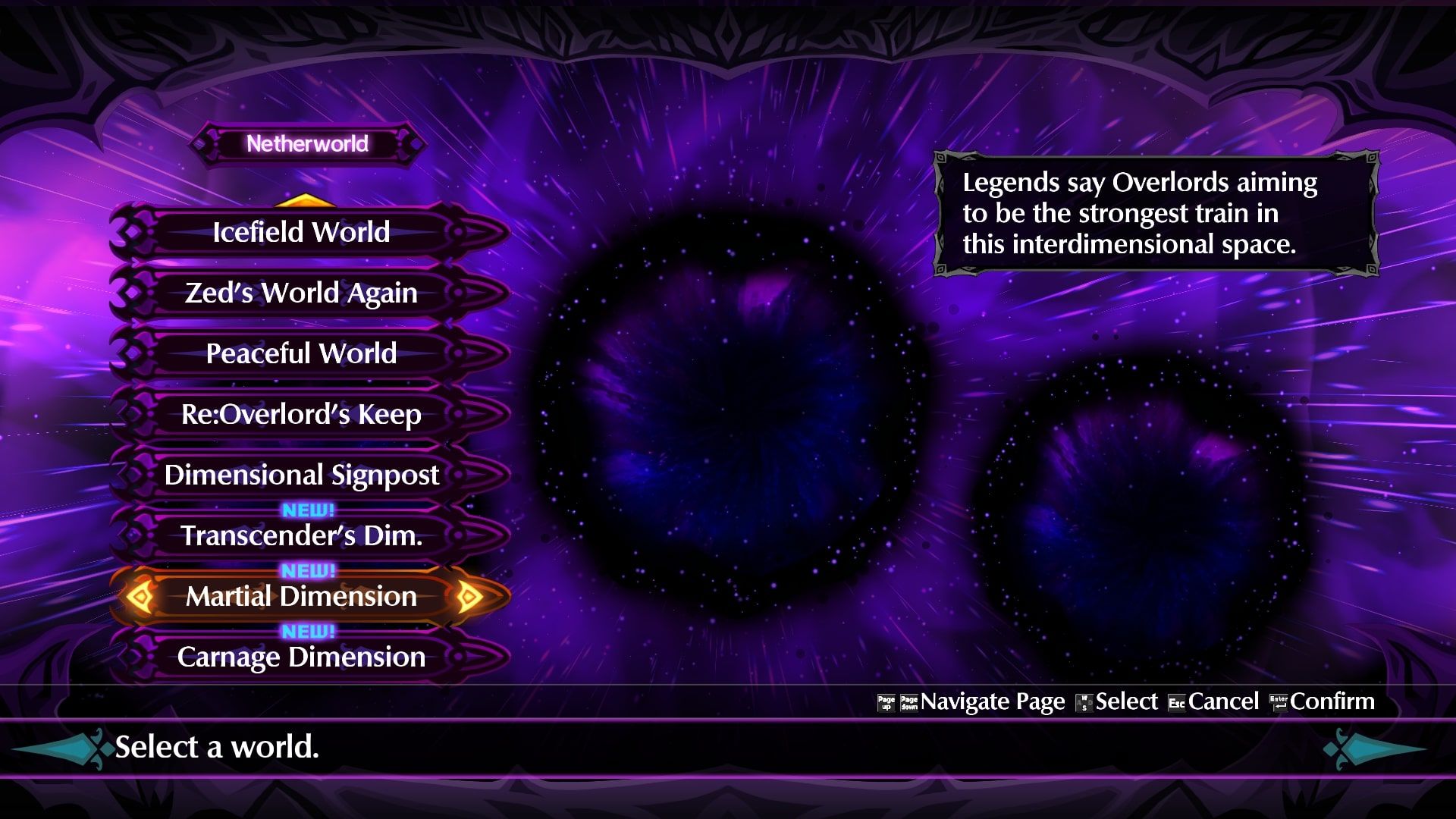 Once you have completed the game and dealt with a cameo appearance from Disgaea’s past, you will unlock the Carnage Dimension. Going here will result in instant death as enemies will be tens of thousands of times stronger than you, and they will smack you dead for billions of damage.

The Carnage Dimension is the first difficulty bump Disgaea 6 has to offer, and it is brutal. What the game doesn’t tell you is that every map you have played up until this point has a Carnage option now. It’s literally a toggle, and it makes even the useless Yarmada a serious threat.

To deal with the Carnage Dimension, you will need to break the level cap (Dark Assembly) and grind to at least level 100,000. This can be done fairly quickly at the Bell Of Blessing. Once you can deal with Yarmada on Carnage Rich Man’s Plaza, start to ramp up the difficulty over time and try to get to around level 500,000.

Work your way through all the levels we mentioned earlier to reach the cap of 999,999. You can stop and take out the actual Carnage Dimension from time to time too. You will need to be around level 300,000 to take on Stage One.

Something you will want to do whilst fighting Carnage stages is equip new items. For the most part, you didn’t need to do this during the main story. For Carnage, you do. Carnage items grant massive boosts to your stats, and not using them will lead to a quick death. Going into the Item World and buffing them even further is advised too, as you can skyrocket your stats even further. 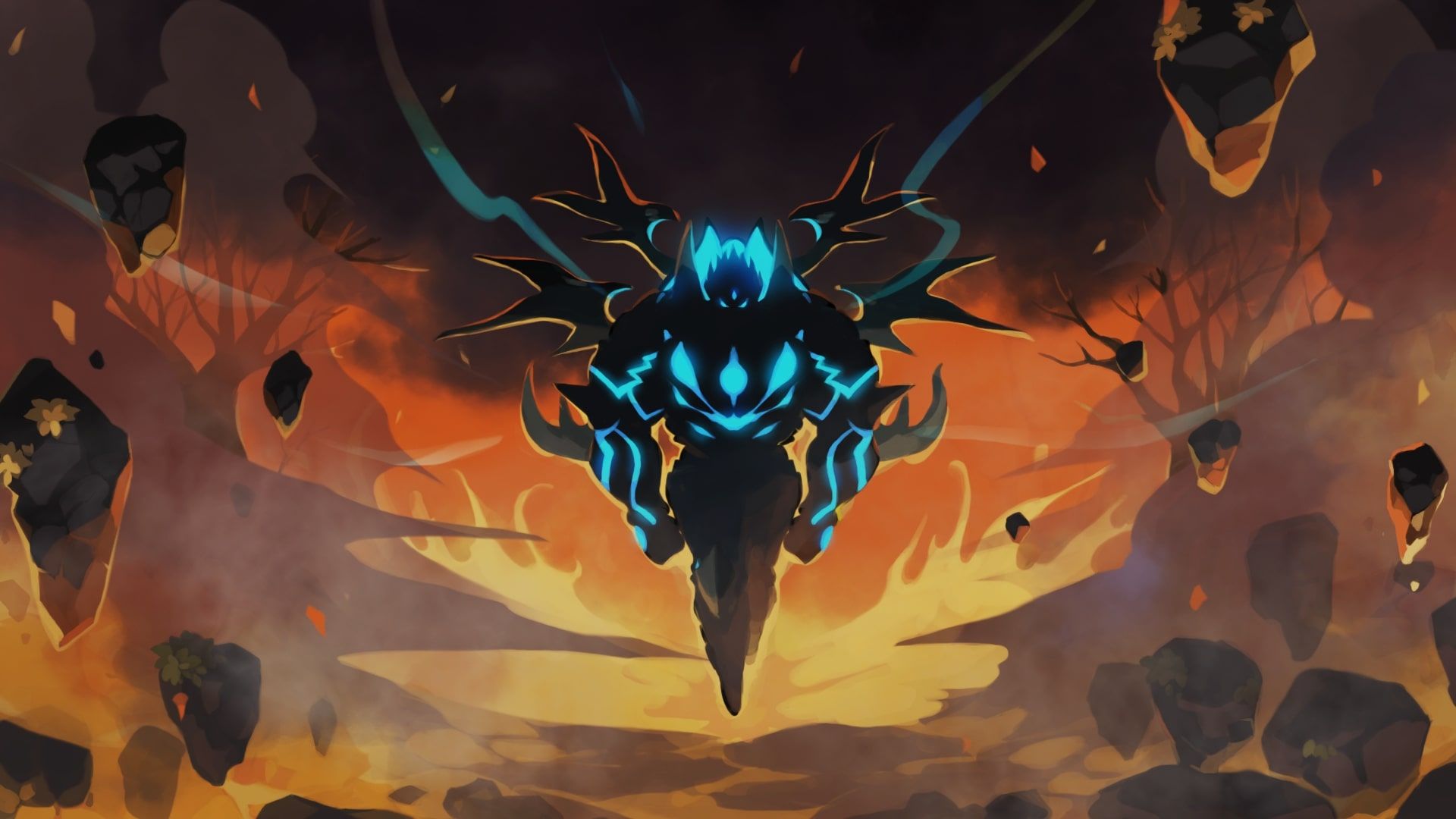 If you thought the Carnage Dimension was hard, well, welcome to Rakshasa – the true end-game. Rakshasa willhave you fighting enemies who start at level 12.5 MILLION, and end at the true level cap of 99 million (and some change). You will not be able to fight anything here for a long time.

To deal with Rakshasa, you will need to break the level cap again (Dark Assembly) and then grind Carnage stages at 20-Star difficulty until you are strong enough. You can then use Rakshasa stages to power level even faster. You will be gaining trillions of EXP a second, which is ludicrous to say out loud.

As with Carnage Weapons, Rakshasa Weapons are incredibly powerful and dwarf everything you have used up until this point. Use them, power them up, and destroy everything in sight. Good luck.