Digivolution is one of the cornerstones of the Digimon franchise, and this remains true in Digimon Survive. Digivolution is the premier way to increase the stats of your digital pals – it'll increase their stats, give them upgraded attacks to use in battle, and will even grant them superior passive skills to take advantage of the turn-based strategy battle system.

In Digimon Survive, there are two ways that digimon end up evolving. One method is used by the partner digimon, who find themselves thrust into the game's narrative attached to one of the human kids who fall into the digital world, and one is for the free digimon that you recruit through your conversational skills. 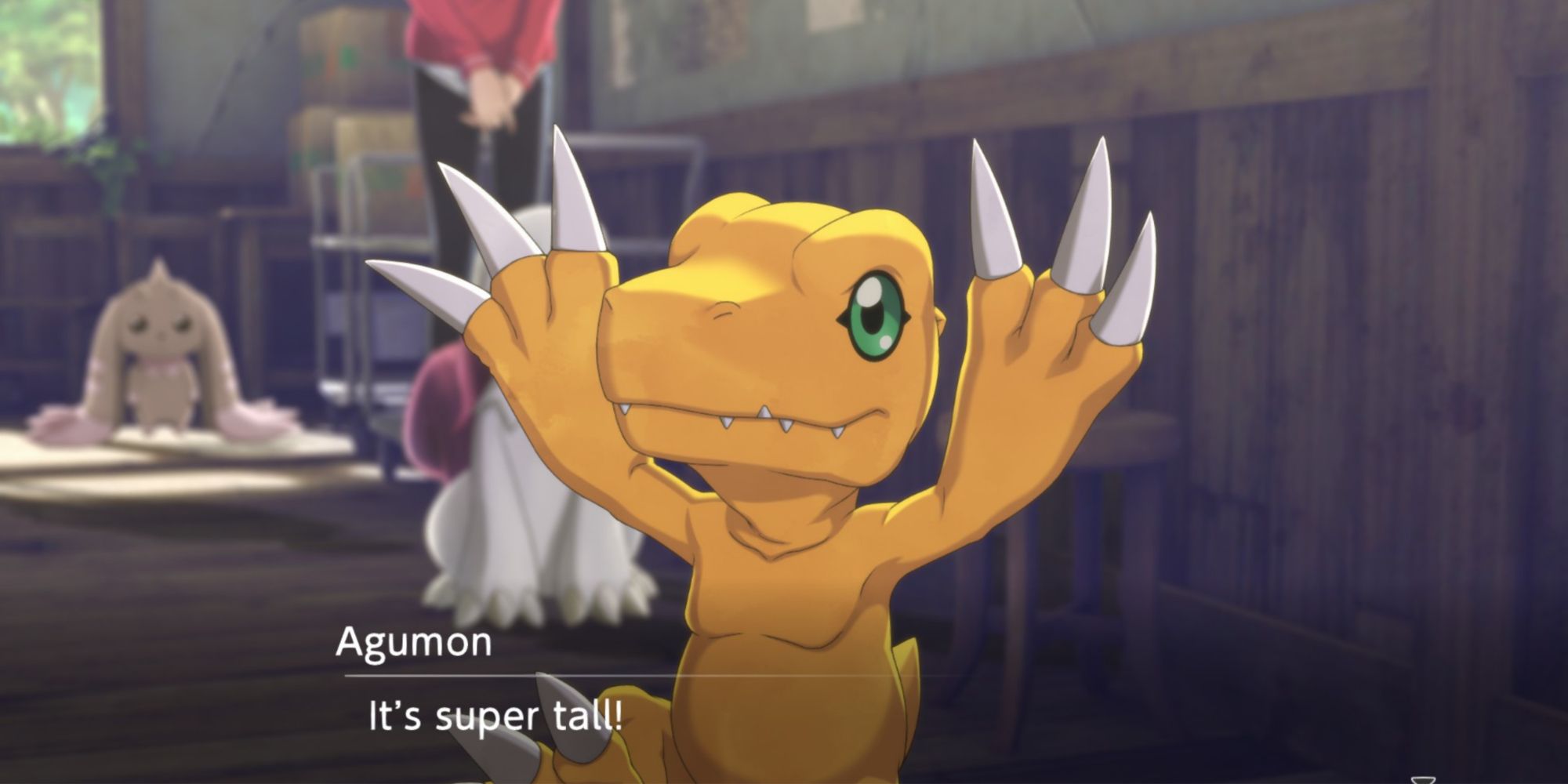 Digivolving one of your partner digimon in this game is a reversible, temporary process – in battle, you can hit the Evolution button and select the digivolution you desire. At the end of the battle, the digimon will revert to their Rookie forms.

Sustaining an evolution will drain a digimon's SP every turn – keep a good stock of SP recovery items if you want to keep digivolutions sustained long-term. Alternatively, you can revert back to your Rookie form once you've beaten the hardest foes or need to spend a few turns moving across the map.

Unlocking new digivolutions is something locked to the game's story – each digimon will only get a new digivolution to use based on the story beats you hit. In addition, some digivolutions are locked behind certain Affinity or route requirements. If you fail to unlock a certain partner's final digivolutions, try making a more concerted effort to raise the associated character's Affinity, or simply play through the game again on a different route. 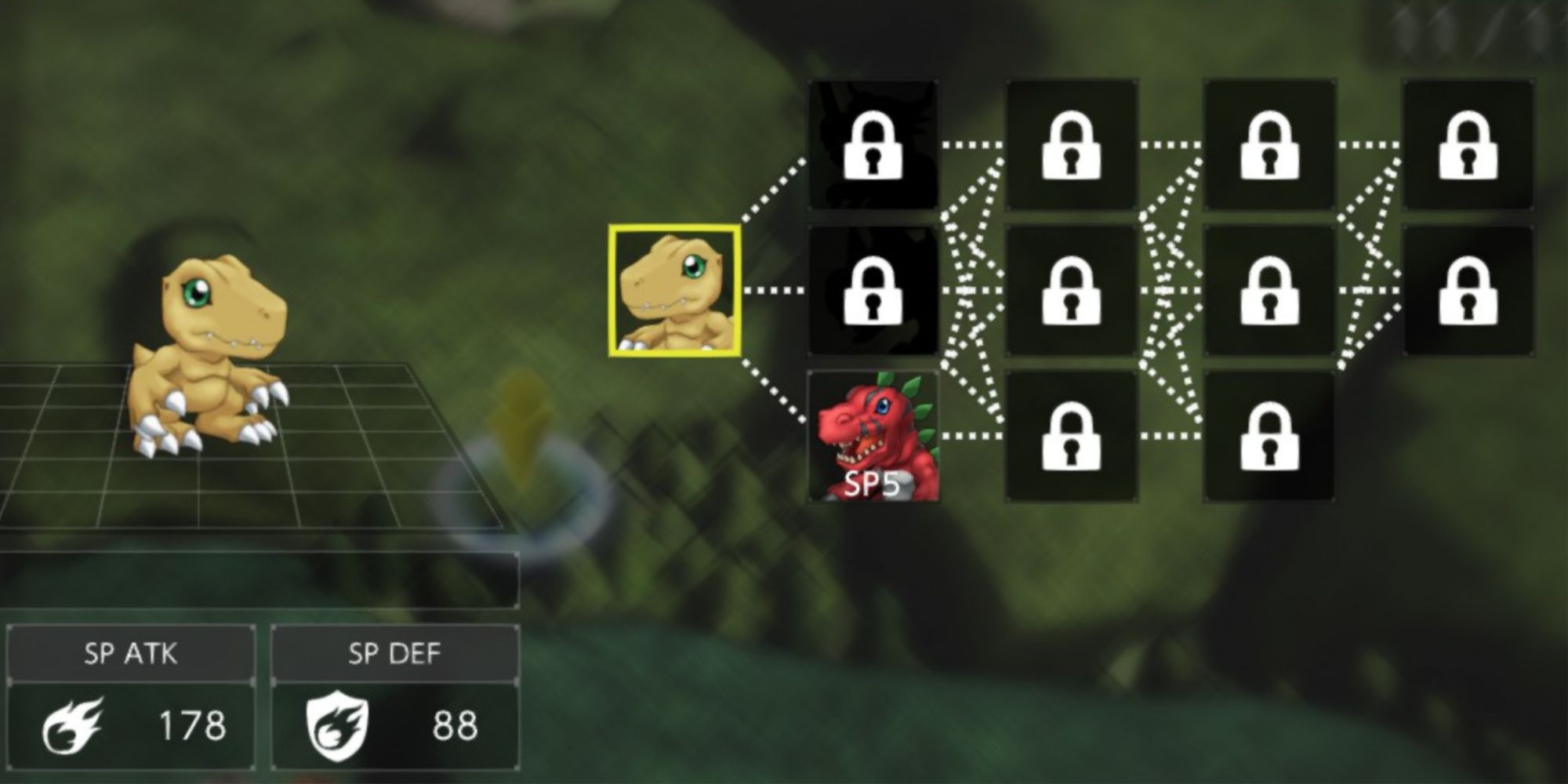 Agumon, the main character's partner, is something of a special case when it comes to unlocking evolutions. Agumon has multiple possible evolutions to pursue for each stage, as opposed to the usual single option that other partner digimon have.

Agumon unlocks a new evolution at very specific story beats, and it's Takuma's Karma levels that dictate which evolution Agumon unlocks at that point in time – there's an evolution for Moral, Wrathful, and Harmony scores, and Agumon will unlock an evolution based on which is the highest score at that moment in time.

It is possible to unlock evolutions tied to different Karmas each time you hit a story beat that gives Agumon another evolution option.

The unlocks are as follows: 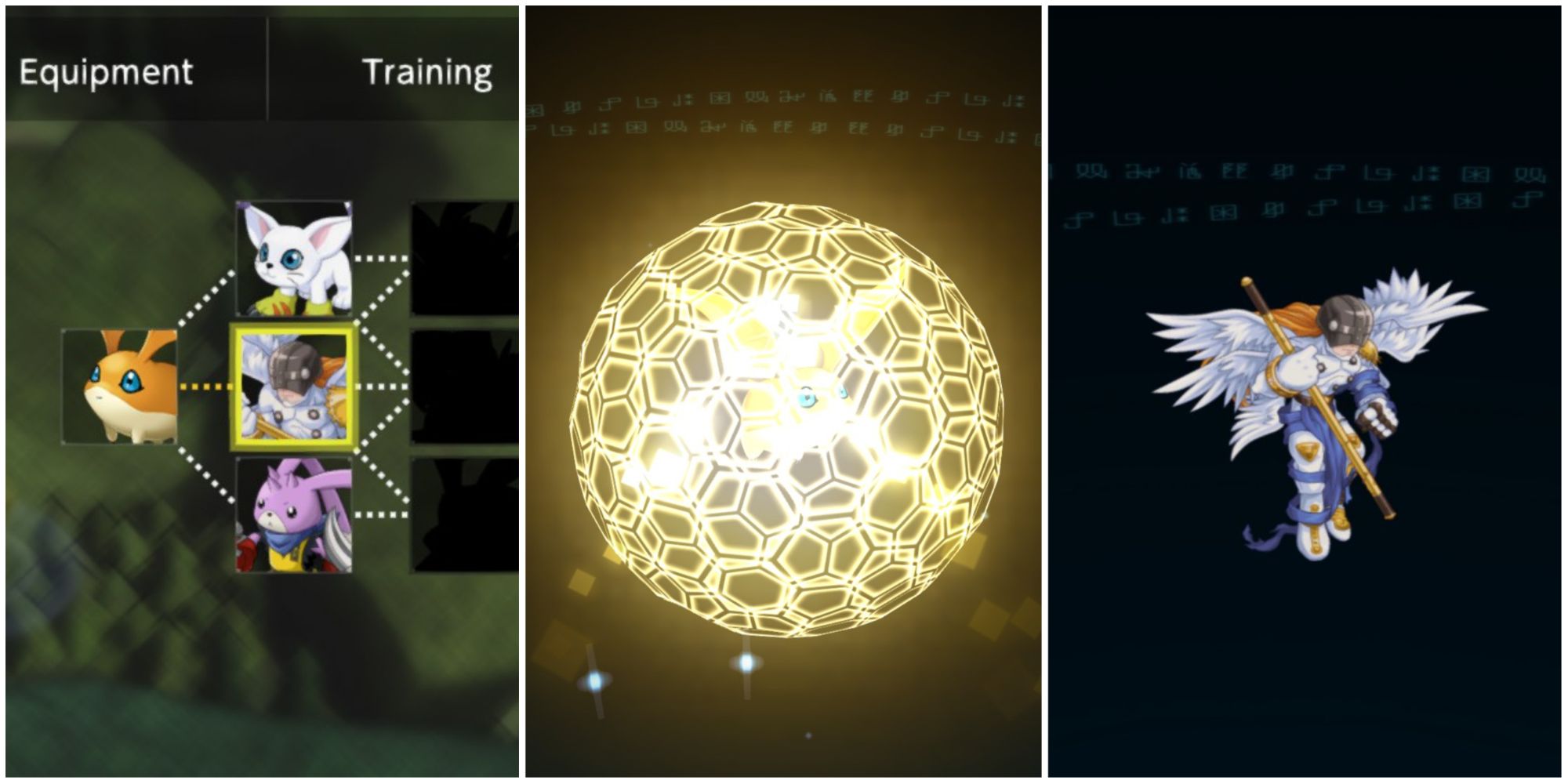 Digivolving free digimon – the ones you recruit from Free Battles and the like – is a different matter altogether. As opposed to partner digimon, when a free digimon evolves, the change is permanent. They cannot revert to previous forms.

Free digimon require Enlightenment Slabs to evolve. These are rare items that you can either find in specific locations in the game, or receive from digimon battles – specifically by asking certain digimon for items after having a good conversation with them.

To use a Slab, head to the Status menu and select the digimon you want to evolve. Switch tabs until you reach the tree-like Evolution screen, and then select the portrait of your desired evolution. If you have the correct Slab in your inventory, you'll be prompted to use it.

Remember, this only works for the free digimon that you recruit personally.

Where To Farm Enlightenment Slabs 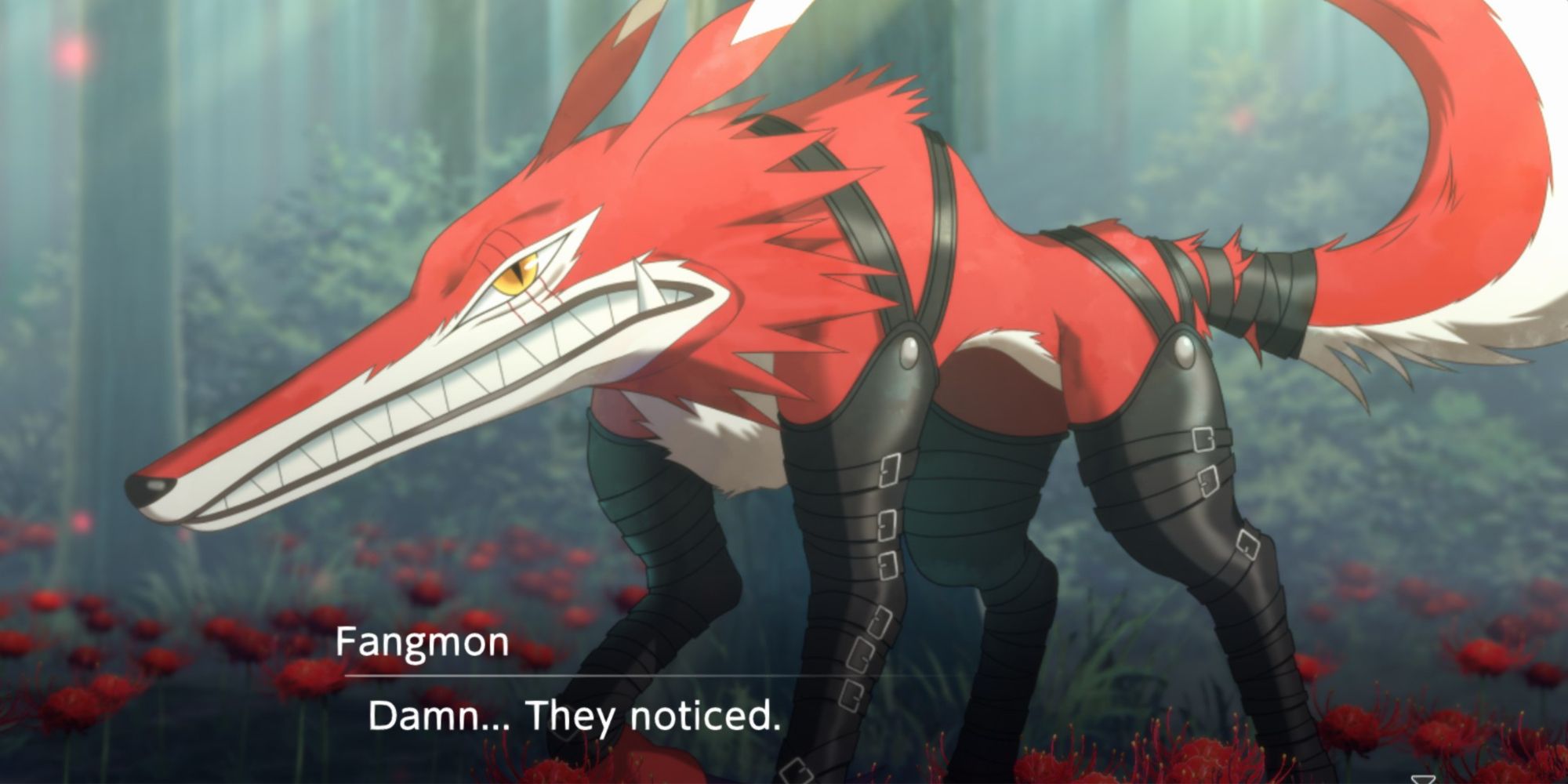 If you're a completionist, you'll want to know exactly where to get as many Enlightenment Slabs as possible.

In general, you should be taking on as many Free Battles as you can cope with – some digimon have a chance of dropping Enlightenment Slabs as loot – such as Fangmon. In addition, open every chest you possibly can when taking on story battles or facing off against shadow battles in Exploration Mode. Some of these chests will have Slabs inside.

If you want reliable ways to farm Slabs, however, you'll have to wait until you can encounter certain digimon in Free Battles, engage them in conversation, and then ask them for items when you fill up their friendship bars. 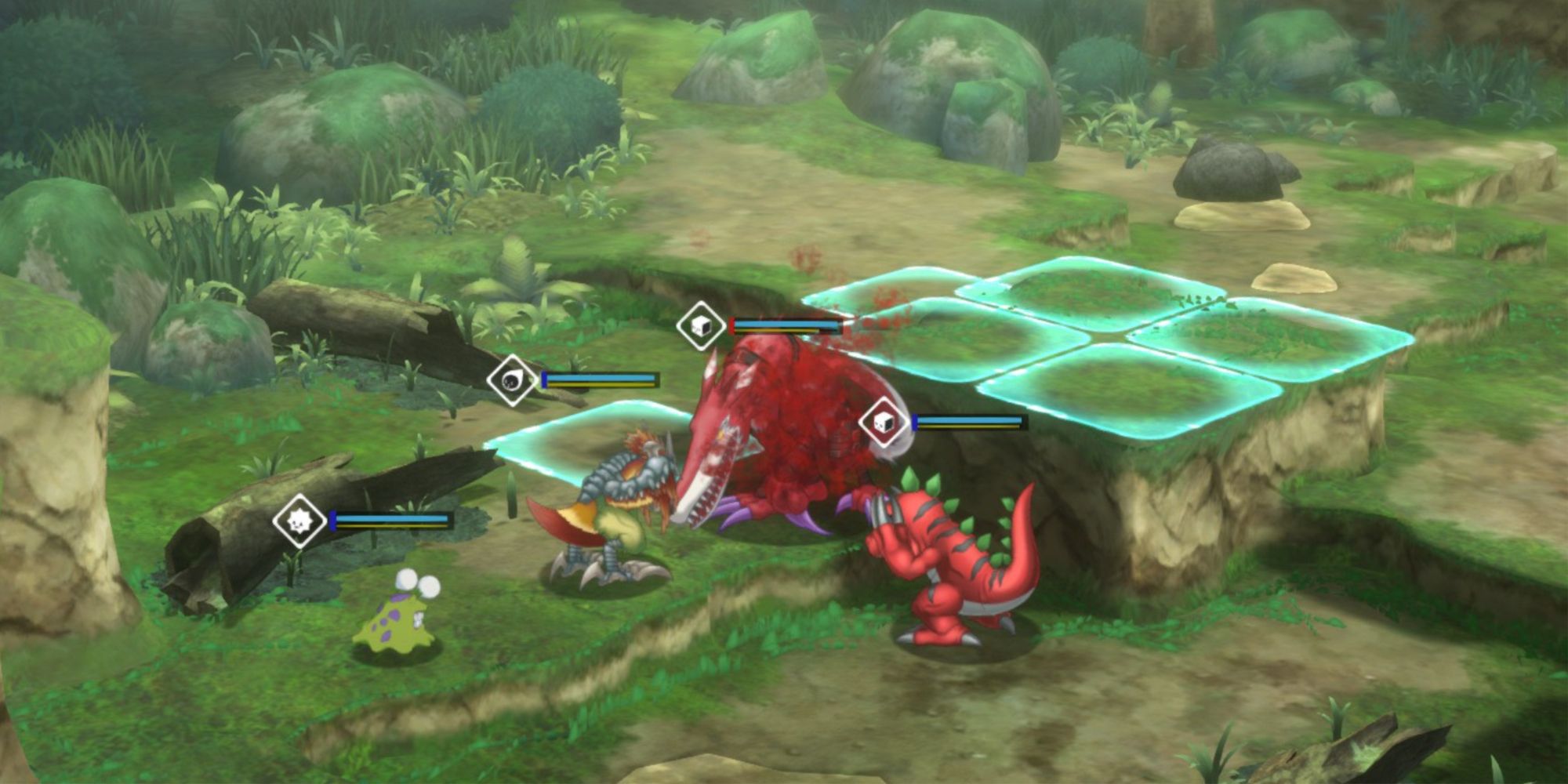 You might notice that you cannot reliably farm Mature Enlightenment Slabs from Free Battles until a later point than you can farm Perfects. You should have enough Slabs through Free Battles and chests to cope, but there is a way to farm them earlier in the game, but it is missable.

In Part 2, you will eventually be forced into a battle where you protect three Gomamon from antagonistic digimon. After this battle, you will be pursued by a very aggressive Fangmon, with a chance of a battle occurring every time you move to a new area.

These battles will end automatically once you survive three turns, but it's possible to defeat Fangmon in these battles to end the fights early. If you manage to defeat the digimon, there is a chance that it drops a Mature Enlightenment Slab. Farm as many Slabs as you want here before heading to the next story beat, and you should be set for the rest of your playthrough.