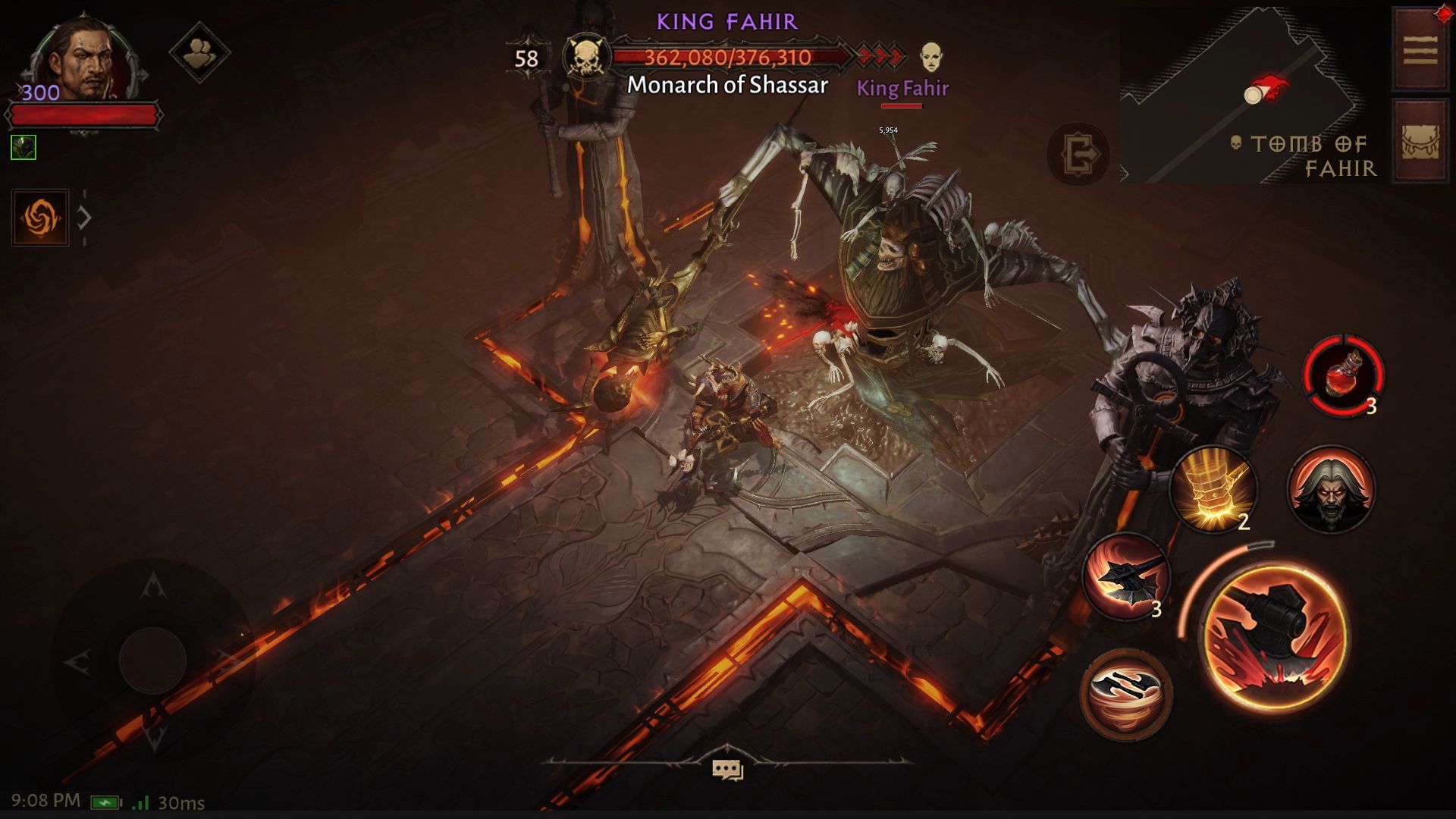 GameCentral tries to separate the fan anger over Diablo Immortal’s microtransactions from the game itself, to see whether there’s still

In the febrile world of online communities, it doesn’t take much to light the blue touch paper of gamers’ fury. If there’s one topic in the world that’s most capable of causing this instantaneous incendiary effect, it’s microtransactions. It wasn’t long ago that the prospect of being able to download a polished video game completely free of charge would have seemed like a beautiful utopia, but cynicism about how free games are monetised has long since replaced that.

It’s fair to say, though, that not all free-to-download games are created equal, and there’s a gulf separating titles like Ni No Kuni: Cross Worlds, with its shameless, NFT-infused pay-to-win mechanics, and something like Team Fortress 2 (before the bots took over). In one you’re eternally handicapped if you don’t drop considerable quantities of real cash. In the other all you’re really missing out on is a collection of sweet hats.

Diablo Immortal sits at neither of those extremes, and in the early game at least, you can play without investing a penny and still experience rapid and extremely satisfying character development. Retaining a tightened version of its older siblings’ gameplay loop, you’re still required to enter dungeons, use screen-filling special moves to dispatch their residents, and harvest a legion of loot from their smoking corpses. And it’s a lot of fun.

Most of the stuff you pilfer is useless apart from its scrap value, but from time to time you’ll find a new piece of kit that provides a small but significant buff, permanently improving your character and letting you take on steadily more powerful and aggressive foes. That cycle remains hugely compelling.

Although it’s never advertised, the real heart of Immortal’s upgrade system isn’t armour or weaponry, but the gems you use to intensify the power of each piece of equipment. While getting new gear will gain you a start, reaching higher levels requires large numbers of increasingly rare gems, which you will find through gameplay but only over a substantial period of grind.

The fact that Blizzard appears to have placed the latter stages of that collection task behind an obscenely expensive paywall, is perhaps not entirely surprising given the amount of effort that’s gone into developing the game; its perfectly metered sense of progress and interleaving upgrade paths making for an engrossingly complex system in which to tinker.

Given the enormity of the task, it’s hard to imagine wanting to spend money on this. It would be like running a marathon and paying to teleport yourself 50cm forwards. There’s nothing stopping you doing it, but the advantage you’re buying is so infinitesimal in the scheme of things, that you’d have to regard it as functionally pointless.

Many of the game’s other problems will already be familiar to MMO fans. For example, you’ll spend most of your time relentlessly repeating the same dungeons and identikit bounties – go to a place, slaughter 60 monsters, come back. However, thanks to its design, battles feel fun and exciting, their rewards always eagerly anticipated as you clear the final boss.

The experience has been comprehensively re-tooled for mobile, so quests rarely take more than 10 minutes, and matchmaking for party play is simple and streamlined, although depending on the time of day you’re playing, you can still be stuck for a few minutes waiting for similarly levelled players to turn up.

Making your way to the current level 60 cap is really just a case of proceeding through the campaign and prioritising Battle Pass quests, whose first level is free, but which has a further three tiers you can pay for. The £4.49 Empowered Battle Pass gives you elevated loot drops, and for £12.99 you can plump for the Collector’s Empowered Battle Pass, which boosts your rank as well as showering you with cosmetics.

There’s also an additional monthly £8.99 Boon of Plenty, which you can stack up to three times for even more login rewards, and that’s before you’ve started shopping for loot-enhancing crests, upgrade materials, or bundled deals of all the above. It’s a practically bottomless pit into which you can pour your hard-earned cash if you choose to.

Crucially though, unless you’re keen to top its online leaderboards, you really don’t have to. There are six character classes to check out, each of which has the same level cap, but quite different skills and special abilities – some ranged, some melee-based – for you to try. And all these powers unlock as you progress, giving you time to test different builds and see what you enjoy.

You’ll also find many special moves synergise with each other, so firing your disintegrate spell at an ice crystal will split its beam to target every single enemy in range, or shooting an arcane wind into the burning debris of a meteor strike or scorch spell creates a firestorm that does extra damage to enemies caught in its confines.

It’s a shame these combos are so clearly flagged though, as the game bludgeons you with call outs until you click through and read about them, removing the delight of discovering them by experimentation.

Yes, there’s auto-navigation, once you unlock it, for each of the game’s multiple regions, but fights remain manual, and do indeed feel like a combination of your skill and the moves you’ve unlocked for your character, even if they’re not particularly challenging – provided you stay within areas rated for your current level.

There are frequent moments when your progress is blocked until you reach a target level, sometimes three or four above where you are now. That means repeatedly grinding dungeons and being a bounty board barfly, circulating between extremely similar quests and the quartermaster’s loot payouts. It’s just as well battles are fun, because the sub-Tolkien-esque dialogue is wearyingly humourless.

While not badly written, it’s long and essentially superfluous. You could, if you wanted, listen to characters wibble on for several paragraphs about ‘the power of the Nephalem’, but it’s quicker to skip it, given that when you boil it down all anyone ever says is go to a place, talk to a person, collect a magical MacGuffin, or kill 40 swamp creatures.

Not to mention, at the end of each conversation there’s a clearly marked waypoint with a set of glowing golden footprints leading to it, meaning characters’ chatter is pure window dressing and can safely be ignored in favour of getting right back on with the eterna-grind. There must be players out there who immerse themselves in the plot, but it didn’t seem tempting to us.

What you get with Diablo Immortal is a lean and brilliantly engineered reimagining of Diablo for mobiles, with all the good and bad that brings with it. Fights are engaging, quests are brief, and progress comes in leaps and bounds. It’s also grossly repetitive, and the speed at which you level up gradually slows down, requiring significant time investment to acquire the rare loot you need to tap its higher levels.

It may all be a bit mindless, but it’s also hard to put down, its role-playing style progression proving as addictive as ever. The sheer quantity of stuff to explore, and powers to make your own, make Diablo Immortal a near-limitless time sink. And if microtransactions aren’t your thing, that won’t be an impediment to your enjoyment for a good many hours.

In Short: The hack, slash, and loot world of Diablo is brilliantly re-engineered for a small screen but the fun, initial progression is offset by a grinding endgame and/or eye-wateringly costly microtransactions.

Pros: Huge amount of stuff to explore, with six distinct character classes, a wealth of special moves that work together as combos, and simple but effective matchmaking.

Cons: The microtransactions are a near bottomless pit and the gameplay is addictive whilst being almost completely braindead. Highly repetitive mission types.