Destiny 2's Guardian Games event is here, bringing with it a new SMG and means to farm Exotic armor. In the Guardian Games, all three classes compete against each other to see who is the best. This is done through a series of new playlists and currencies exclusive to this event.

For those who have never played Guardian Games before, this is effectively a PvE event that lasts for three weeks, augmenting the Vanguard Ops playlist while adding new playlist variants. This guide will go over what the Guardian Games is, how this event's rather confusing scoring system works, and we'll cover the rewards you can expect from participating in this event.

What Is Guardian Games? 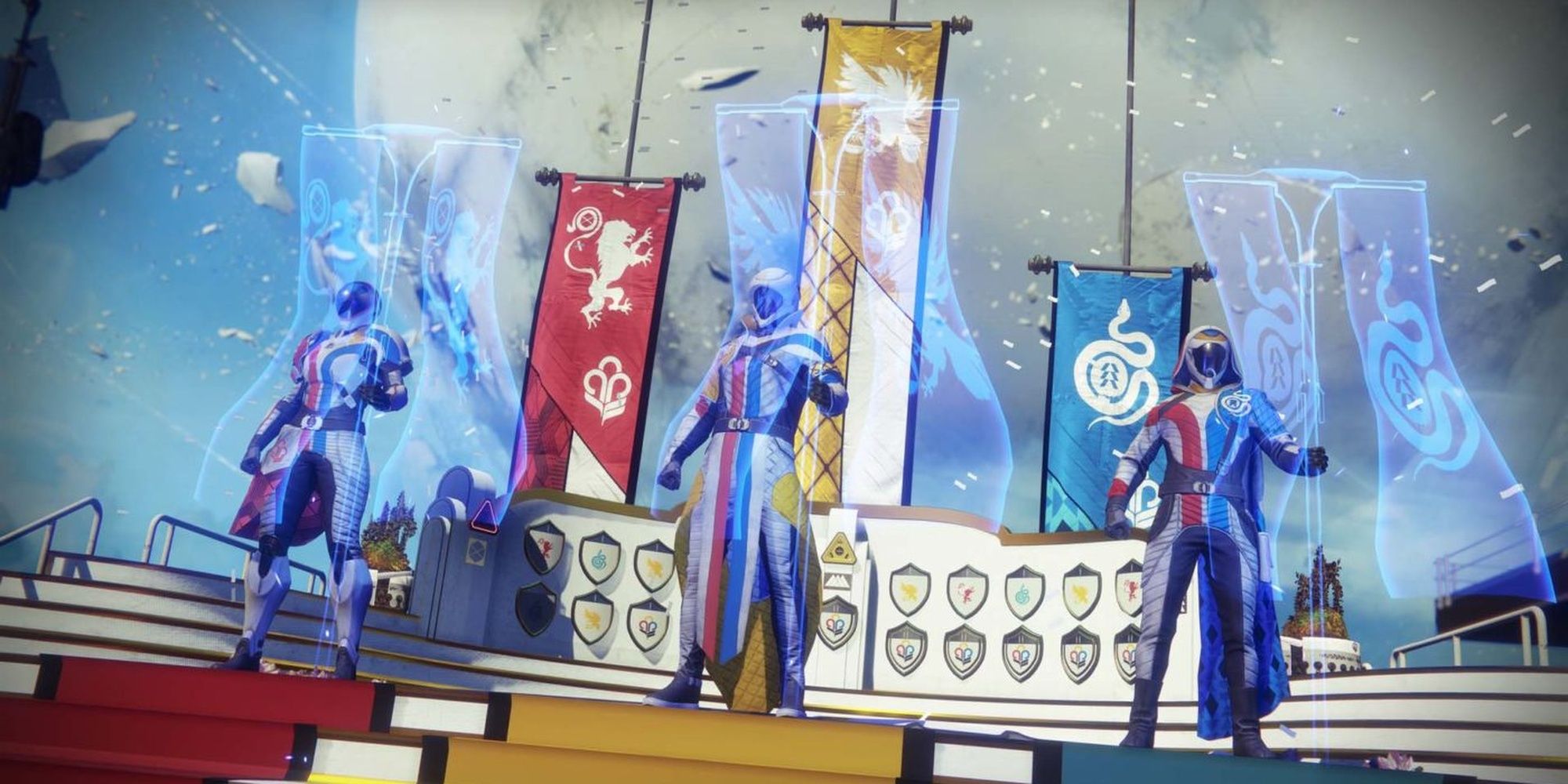 Guardian Games is a competitive event that runs from May 3 to May 24. Acting as the Olympics of Destiny, players will represent one of Destiny 2's three classes and compete in various activities to see which class is the best. The class that performs the best over a given week will get a unique glow (bronze, silver, or gold) for the following weekend. Whichever class gets the highest score throughout the Guardian Games event will have a special statue in that class' honor for the entire year.

That's nothing but flavor for most players, so why should you actually play the Guardian Games? Two reasons: 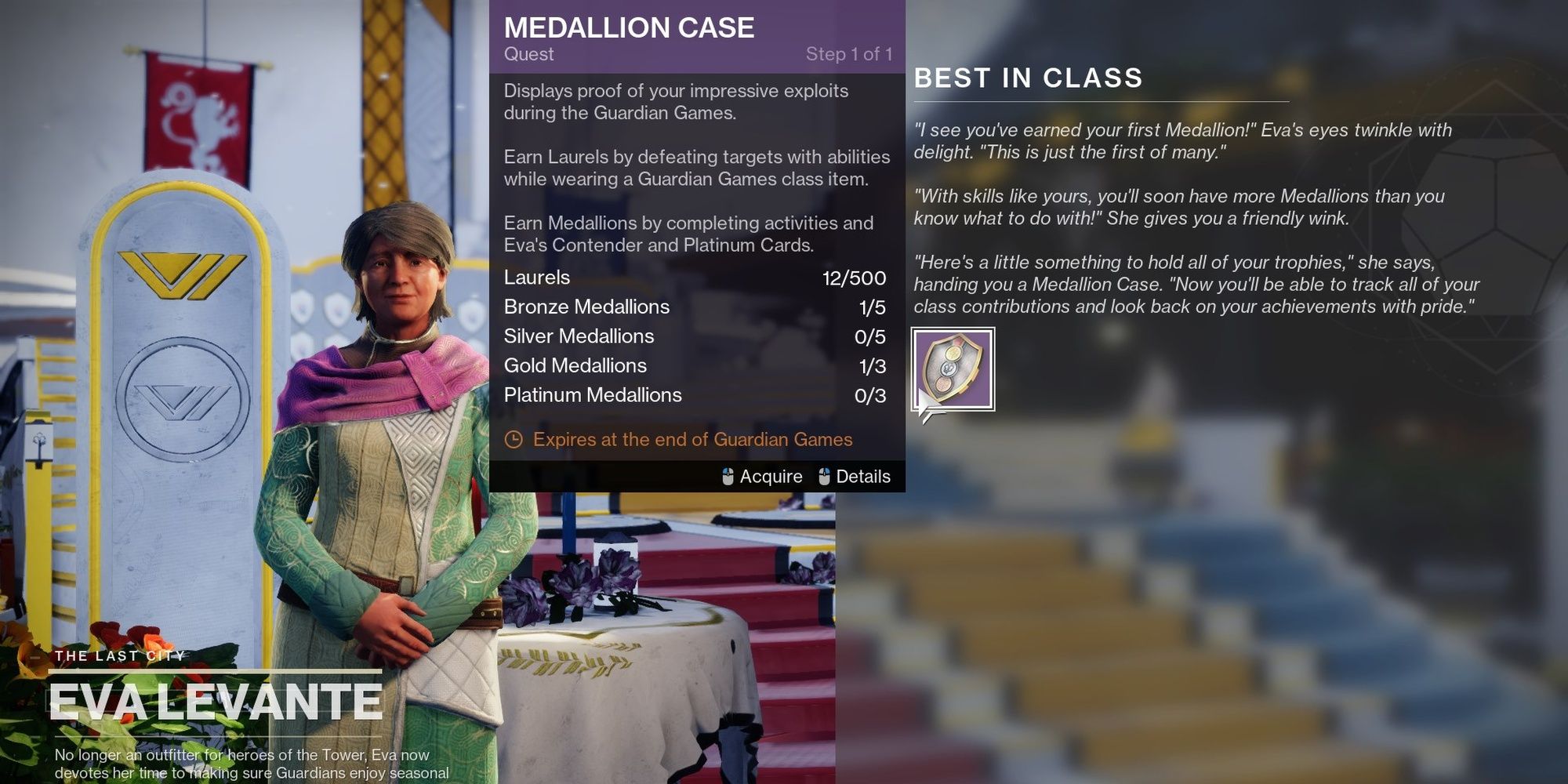 Before we get into Guardian Games' scoring system, you'll need to complete a quest from Eva Levante first. Make your way to the Tower and speak with Eva. She will give you a Guardian Games-themed class item and the "Best in Class" quest. This quest has nine steps, although a few of them are just speaking to NPCs:

When you first speak to Eva, she will give you a class item and 100 Laurels, Guardian Games' unique vendor currency. These Laurels are enough to purchase one of four Contender Cards from her. Each Contender Card focuses on a certain activity type—Vanguard, Crucible, Gambit, and PsiOps. Pick whichever activity you like the most, as you'll need to farm it to finish the card.

Medals are earned by completing Contender Cards, that quest you just bought from Eva. Most low-tier cards grant Gold medals, while higher-tier cards grant Platinum medals. For this step, you just need to finish your card.

To help Guardians compete with one another during the event, Zavala has created multiple Strike playlists that persist throughout the Guardian Games. You'll see two new playlists at the top of the Tower Directory: the Recreational Playlist and Training Playlist. You'll only have access to the Recreational playlist to start.

The Recreational Playlist is effectively the Vanguard Ops/Strike Playlist with a scoring system. You'll earn score similar to a Nightfall but with new modifiers; defeating enemies with certain weapons, defeating Champions, and going on streaks will rack up your score. This ties into this year's scoring system, which we'll cover later. For now, just complete one Recreational Strike.

Now that the quest is complete, you'll now have the Training Playlist unlocked and even more Contender Cards to choose from. Let's go over how the currencies and cards of this year's Guardian Games work. 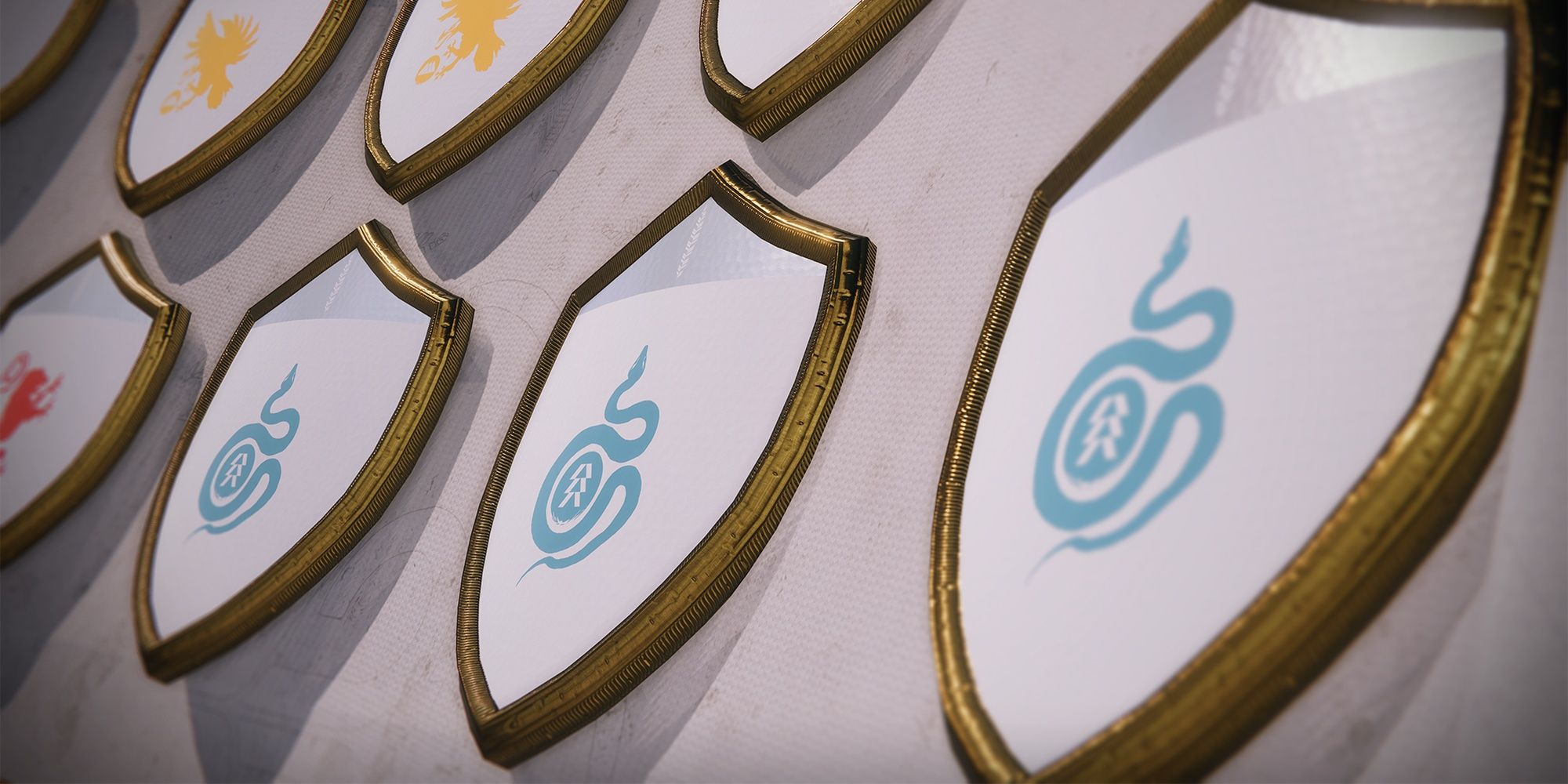 Laurels require a Guardian Games class item equipped to spawn. The class item you received from Eva Levante will work. With the class item equipped, any ability final blows you land will spawn Motes of your respective class, granting you Laurels when grabbed. Hunters drop blue Motes, Warlocks drop yellow Motes, and Titans drop red Motes. Motes that match your class are worth more. You'll use those Laurels to purchase Contender Cards from Eva Levante and repeatable bounties. 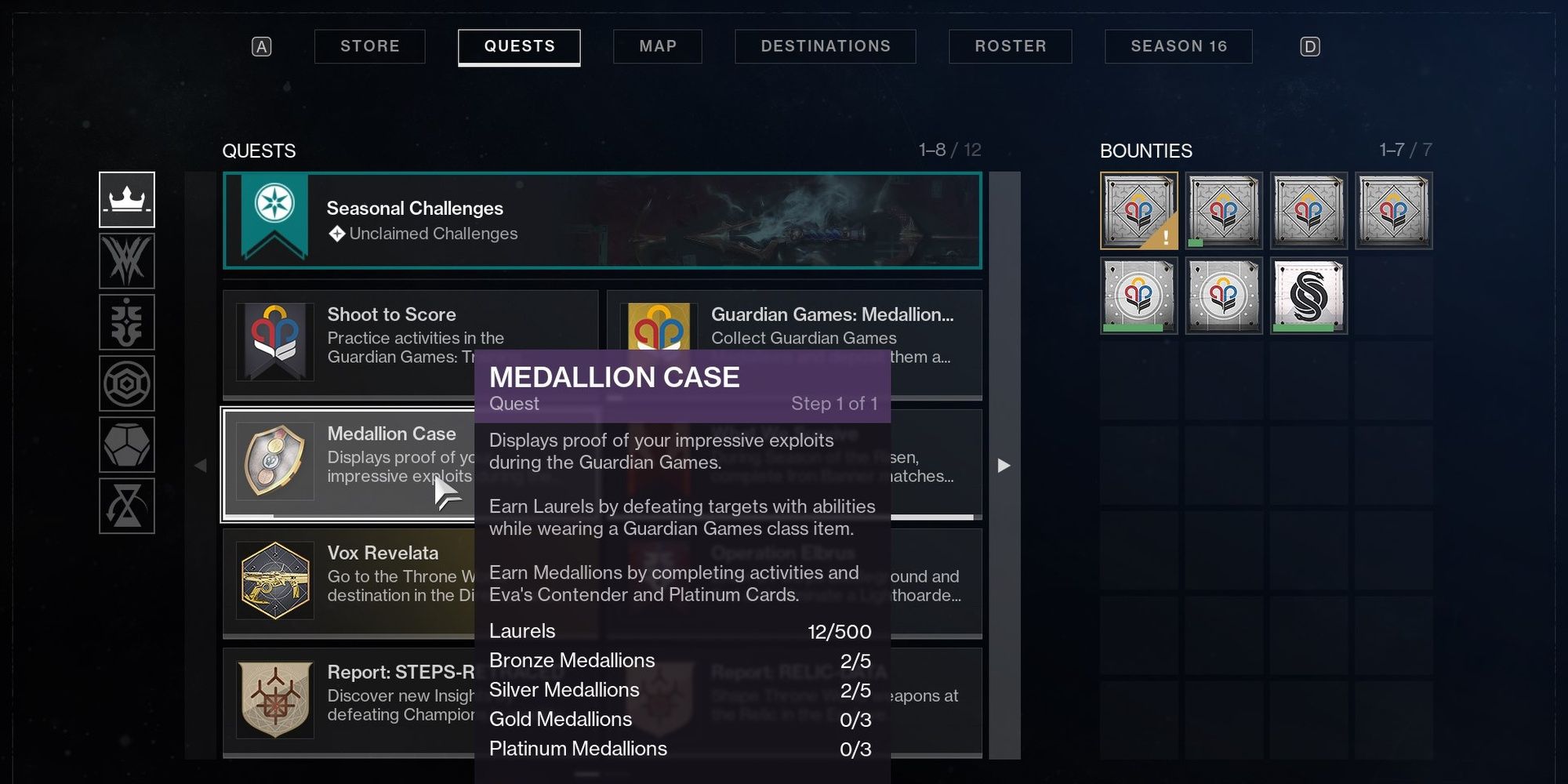 You can view how many Laurels and Medals you have from the Medallion Case item in your Quests tab. This item is obtained during Eva's "Best in Class" quest.

Medals are used to progress your class' rank in the Guardian Games competition. There are four types of Medals:

Why Should I Care About Medals? 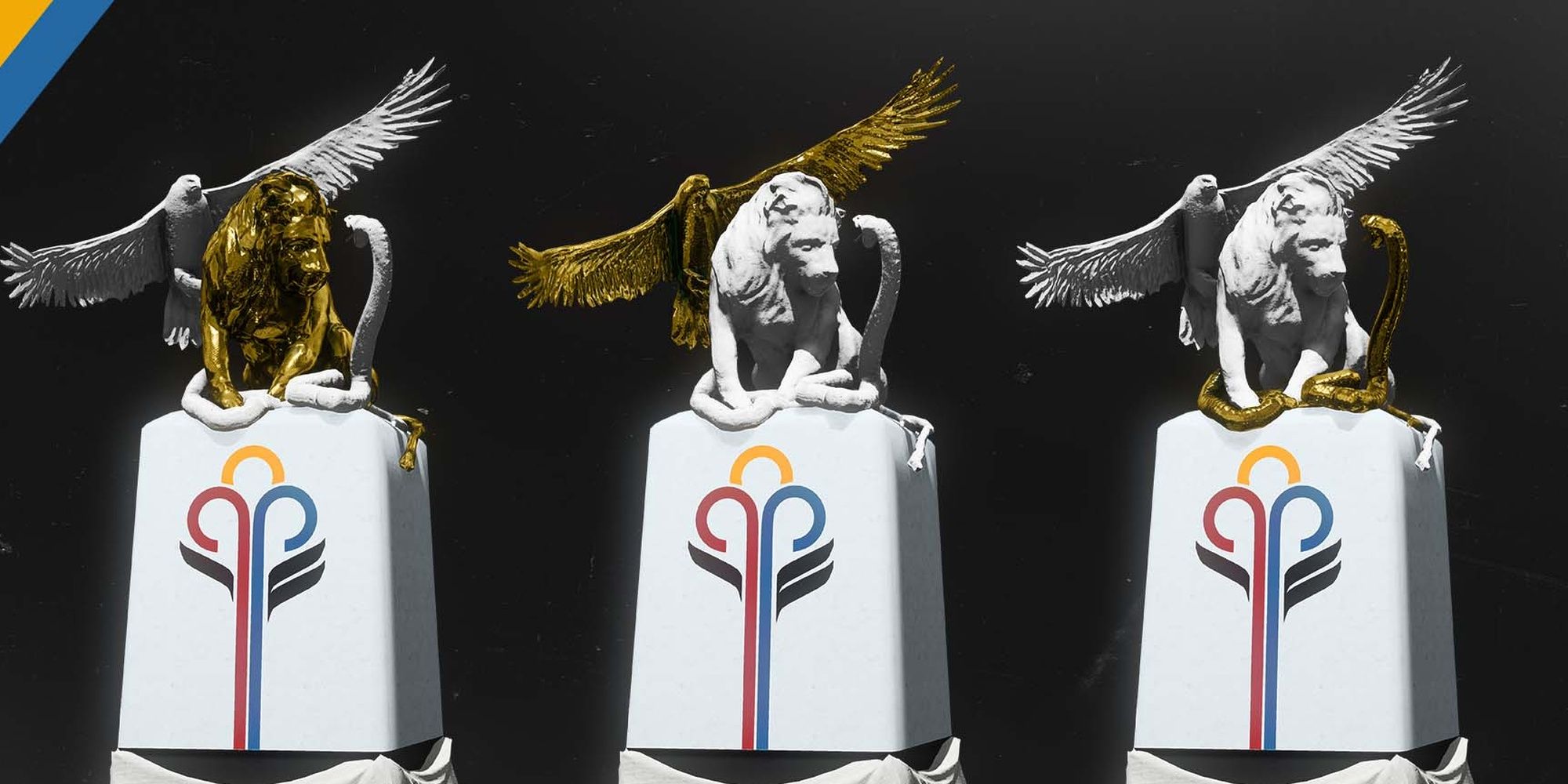 For those who are interested in winning the event itself, here is how many points each Medal gives your class:

What Are Contender Cards? 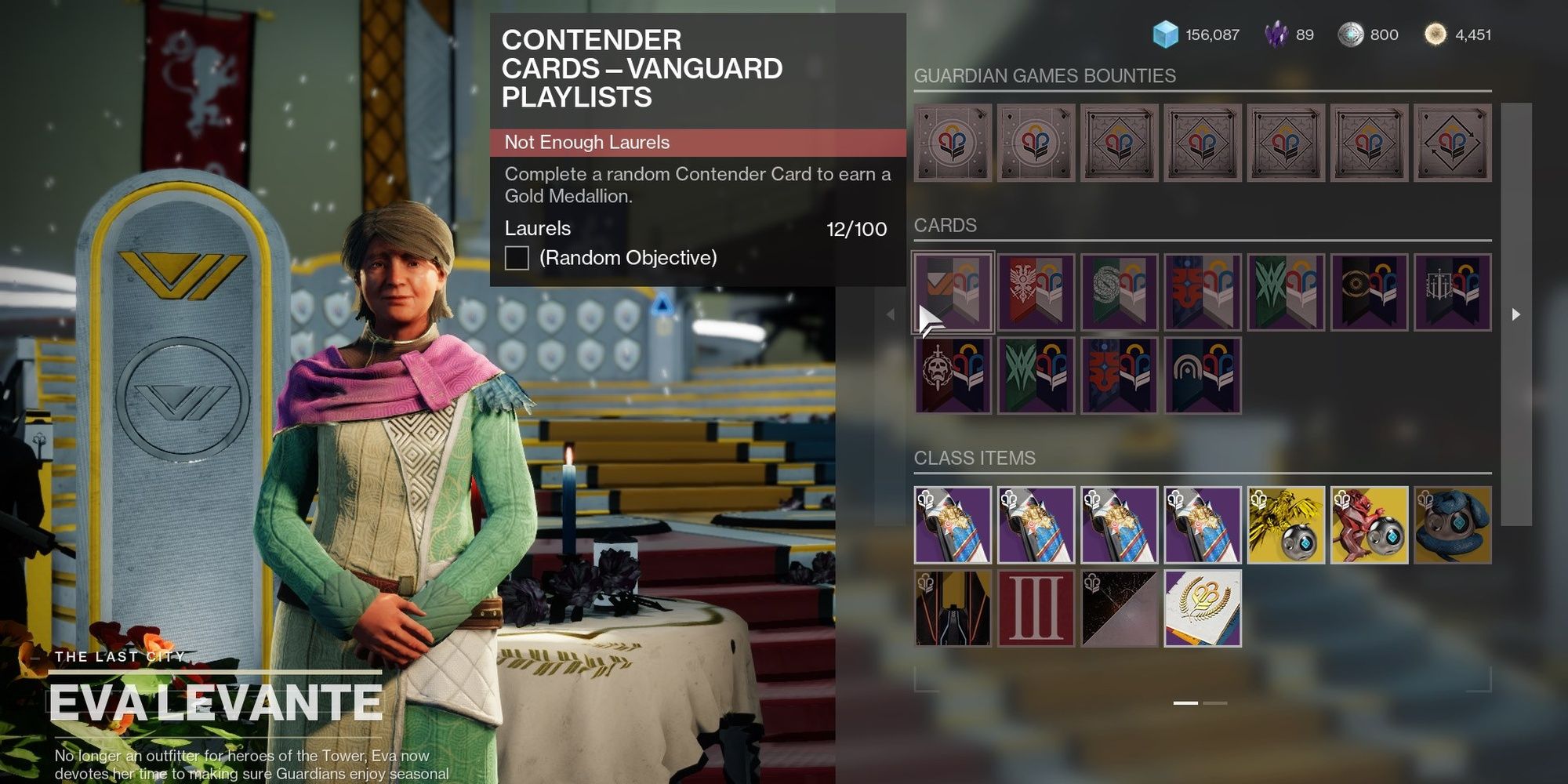 Contender Cards are miniature quests you can pick up from Eva Levante, each costing Laurels. Cards are separated into Gold and Platinum tiers, Platinum requiring you to farm more difficult activities. Contender Cards are your main source of Medals in Guardian Games, so be sure you grab one whenever you have enough Laurels. Completing a Platinum Card will grant you the largest reward bundle on the following weekend.

There are 11 types of Contender Cards this year, each listed below. 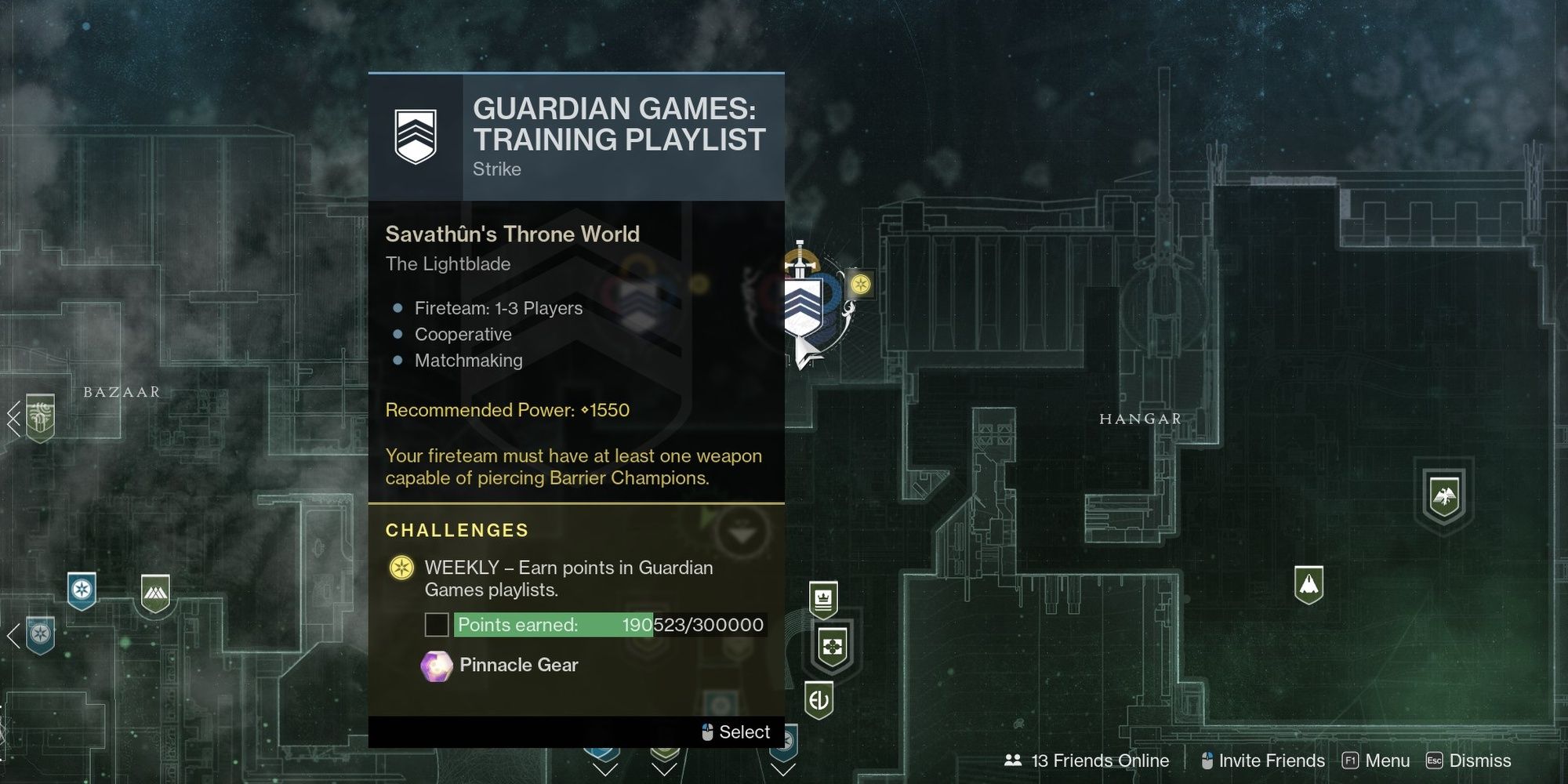 Three new playlists have been added to this year's Guardian Games event for Guardians to play.

Training and Competitive are the two playlists you'll actively play during the event. Training is available during the entire event and acts as the Vanguard Ops playlist with scoring. Competitive is only available on the weekend but is more rewarding.

How Does Strike Scoring Work? 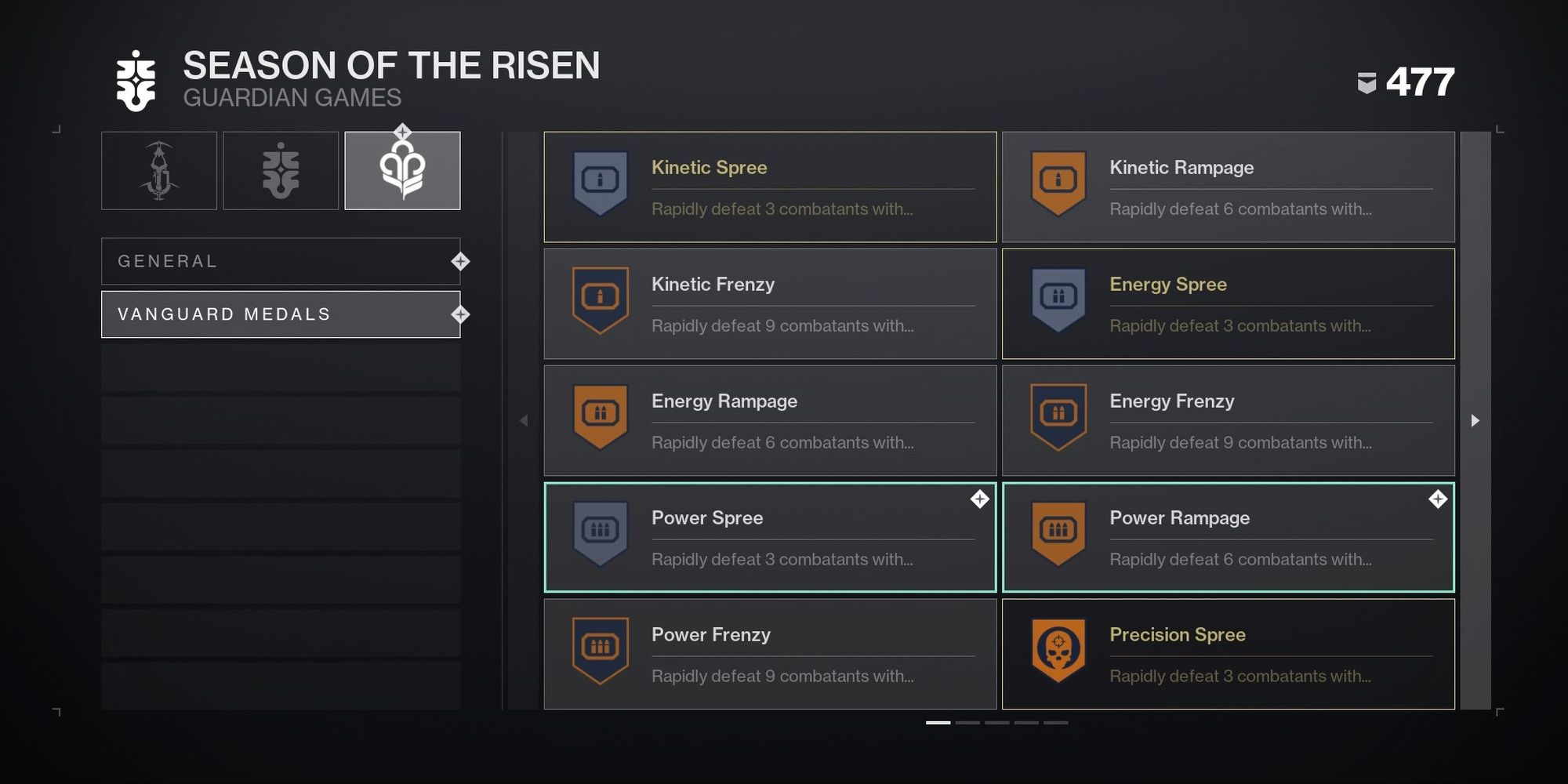 Unique to this year's event, all three Guardian Games playlists feature a scoring system akin to the original Destiny. This is not the Nightfall scoring system; it's completely new. Achieving killing sprees with certain weapons, abilities, and using Supers will build up additional score. Hit certain thresholds, and you'll complete the activity at a higher reward tier, granting better Medals. This might also affect reward drop rates like Exotics, but more testing is needed. The team that gets the highest score in the Competitive Playlist will get a golden glow around their arm for the entire weekend. Second and third place teams will get silver and bronze glows, respectively.

You can find a full list of these score-altering sprees in the Triumphs tab.

You'll occasionally see a buff called "Ability Empowerment" on your screen. This buff is determined by how your class is ranked on the Tower's event podium.

These buffs seem to enhance your Guardian's abilities. The higher your class is ranked in the event, the stronger the buff is. 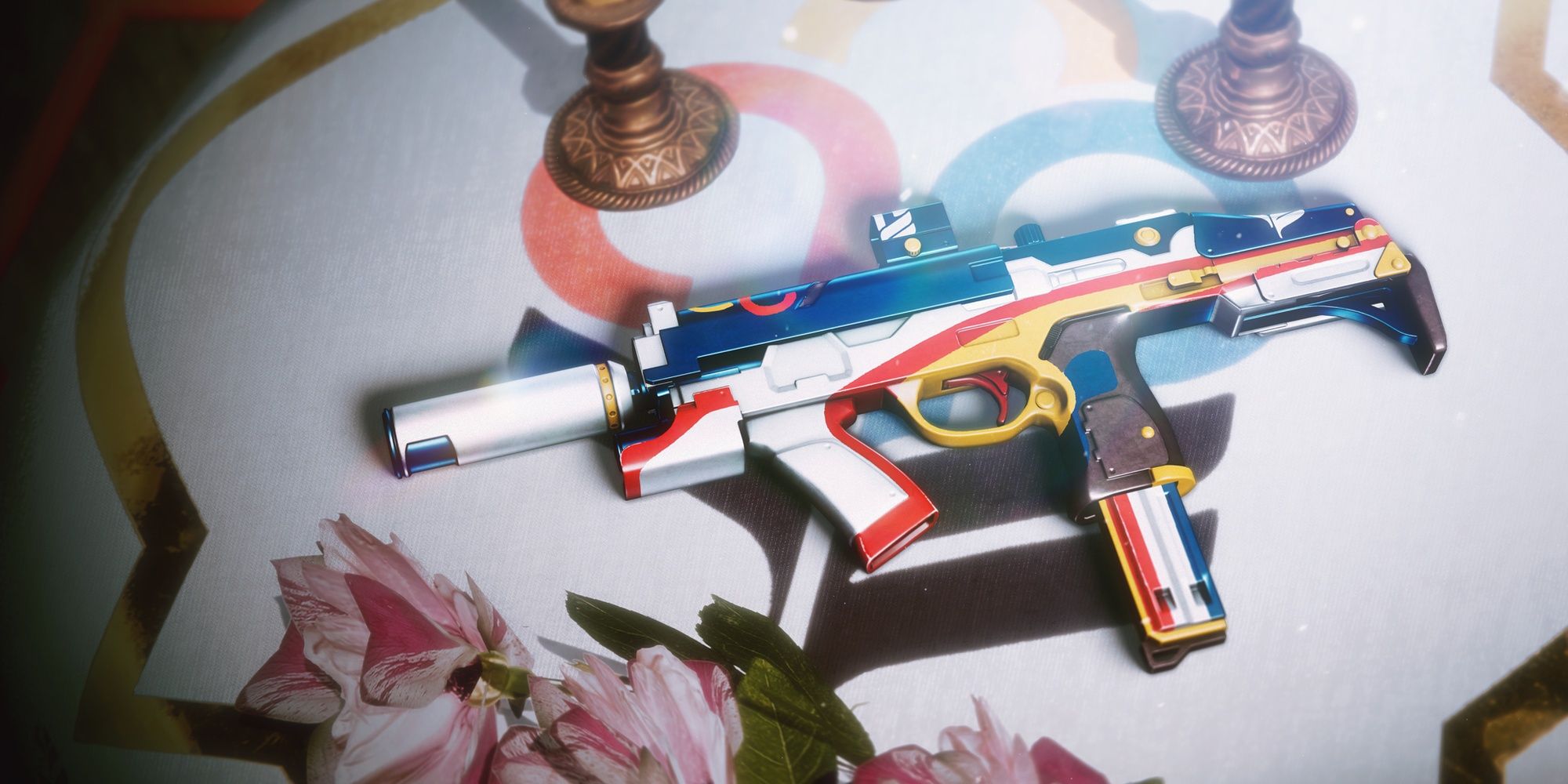 It wouldn't be a Destiny event if there wasn't new loot to chase. Guardian Games features a new Void SMG named The Title, an Aggressive Frame that grants class ability energy with each kill. Beyond that, this event is your only means of earning the Heir Apparent catalyst and Guardian Games-themed cosmetics from Eververse. 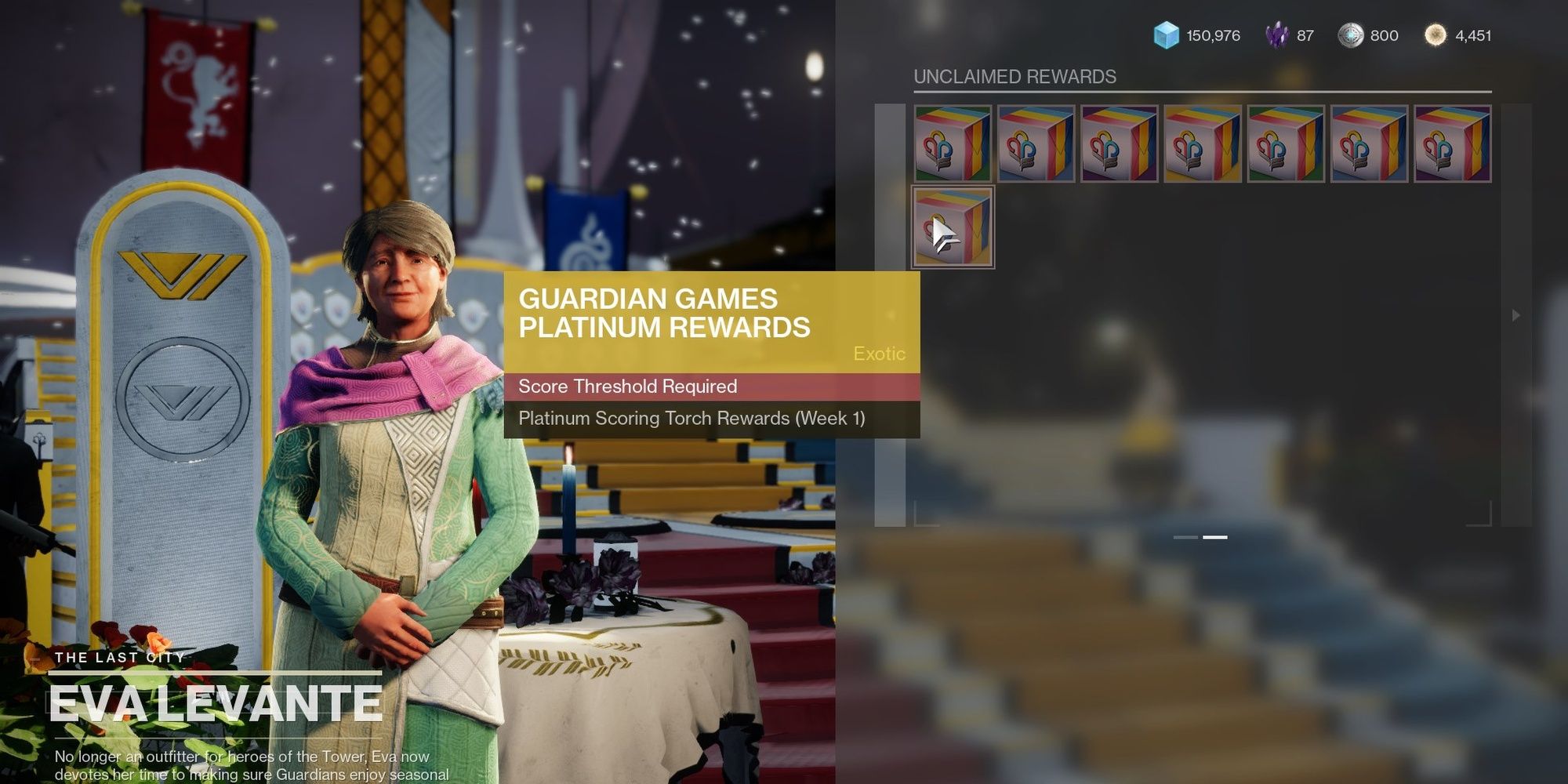 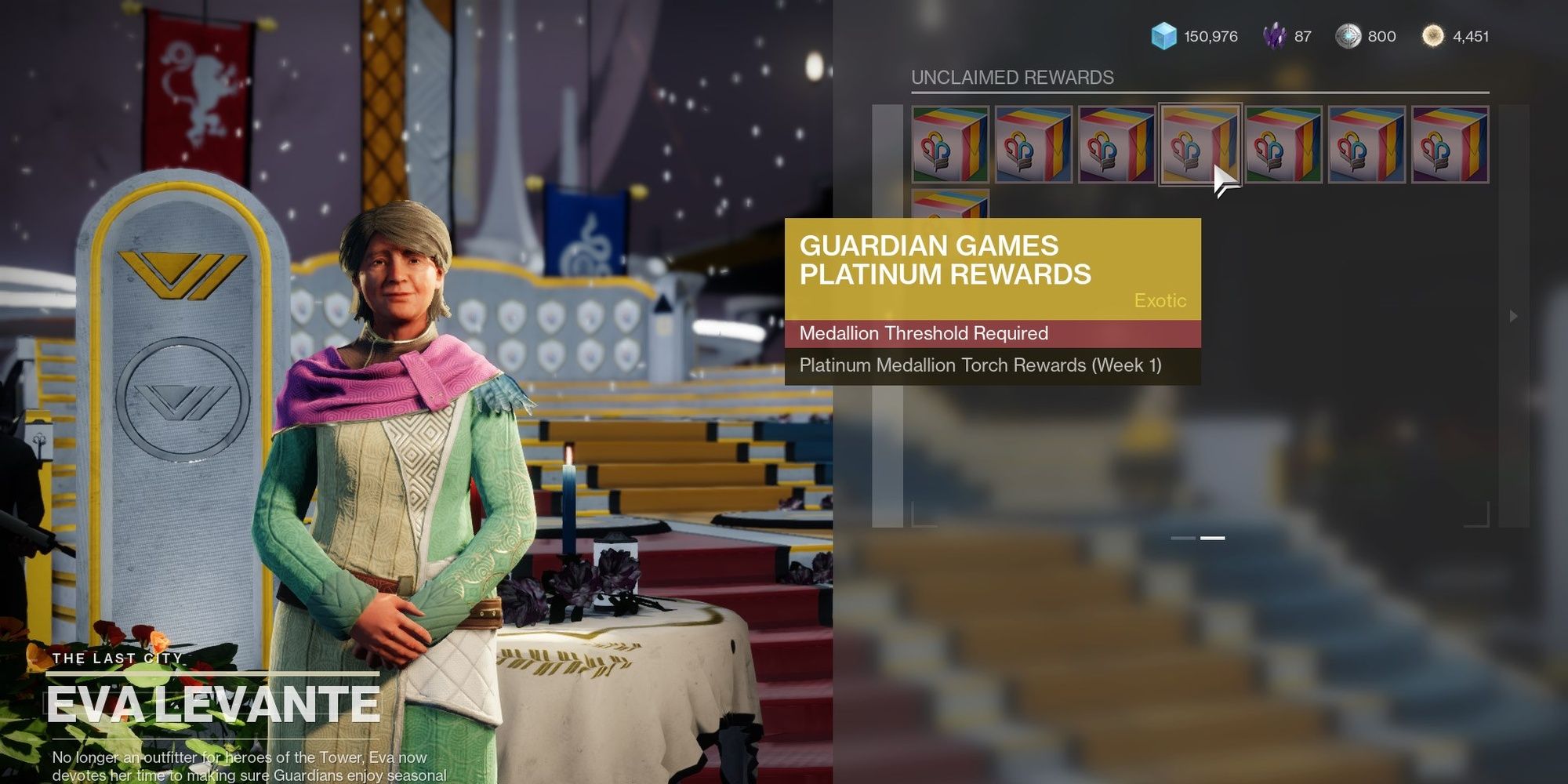 Participation during this event also gives you certain reward packages during the weekend, all of which are supplied by Eva. There are two bundle types:

Both package types vary in rarity from bronze to platinum, platinum granting the most loot. These packages grant Masterwork materials, The Title SMG rolls, and other goodies. 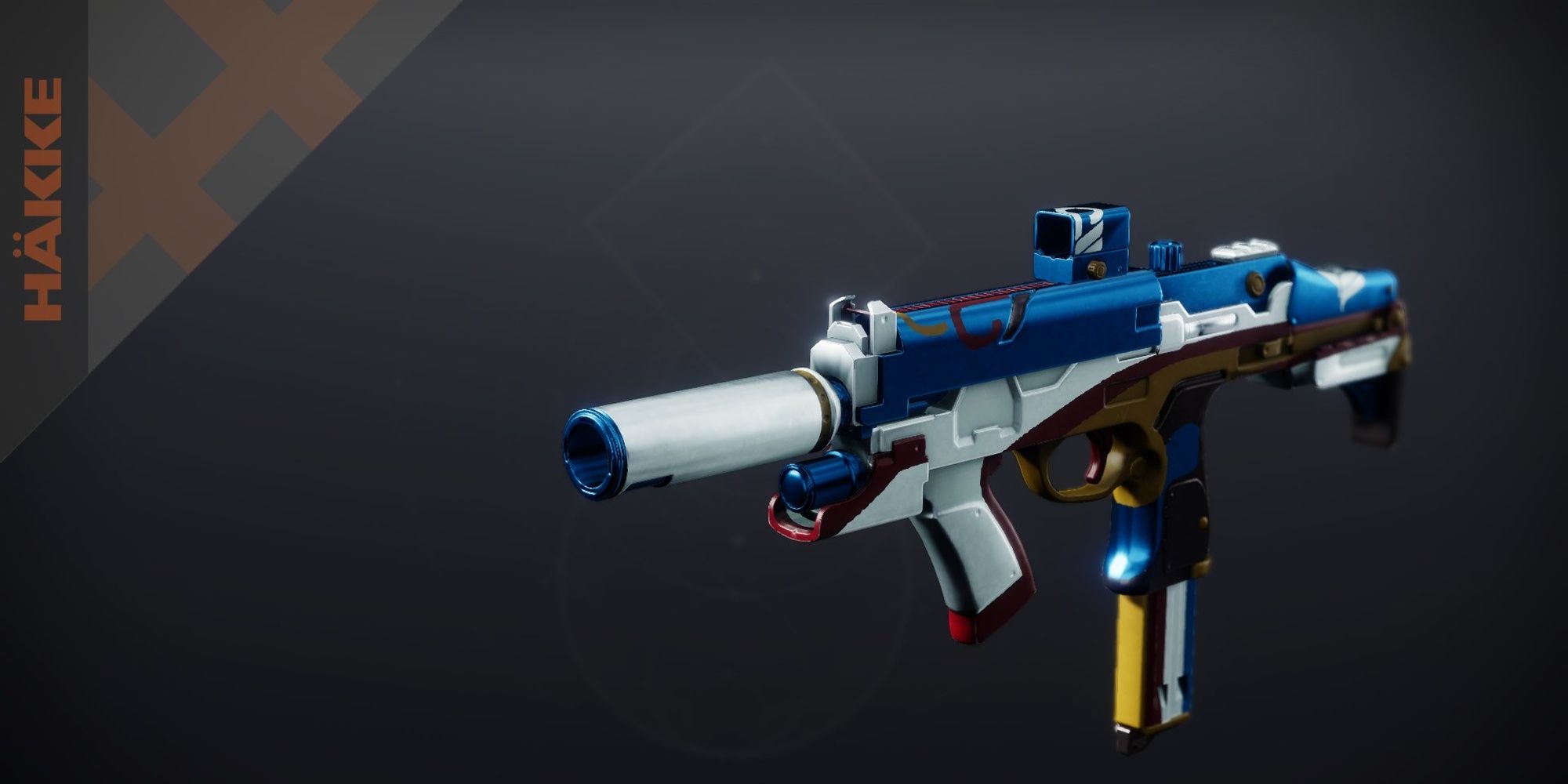 The Title is a Hakke SMG that comes with Classy Contender, an Origin Trait that grants a small chunk of class ability energy with each kill. It features an above-average zoom of 15, a base range of 46, and it can roll with a wide range of consistency perks. With that said, this weapon's stability will make it tough to use on a controller. Speccing for stability and range is recommended in PvP, while PvE players can get away with just using Stats for All.

The Title's base range is not competitive with Multimach or Shayuras in the Crucible. Until SMG range gets normalized next season, you'll need to use Full Bore with a Range Masterwork to get 20 meters of range. We recommend Smallbore for when this season ends. 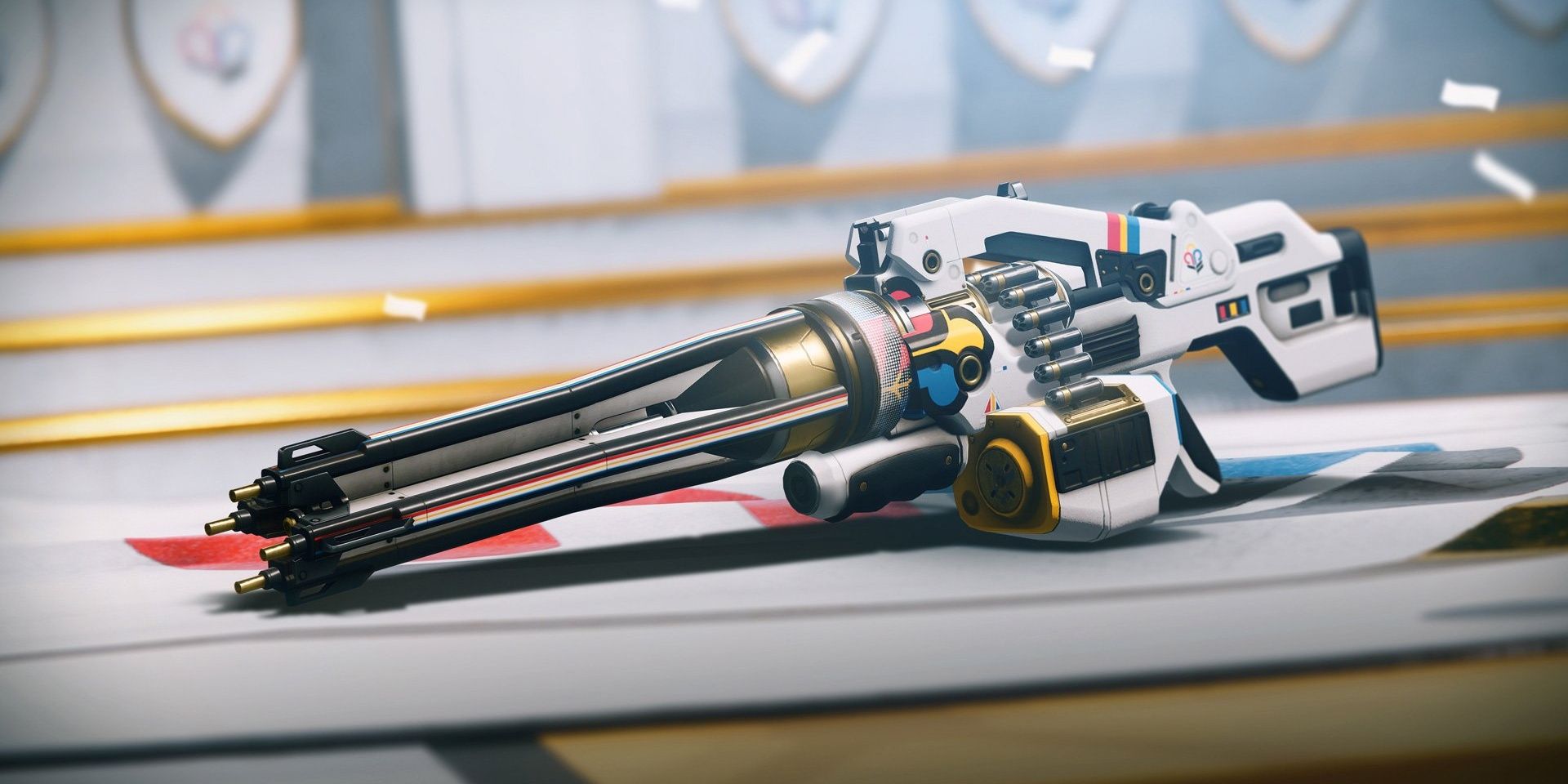 During Guardian Games, turning in Gold and Platinum Medals at the podium has a small chance of granting the Catalyst. Once the Catalyst drops, you must defeat 700 enemies with the weapon to finish it. Completing the Catalyst grants the Legion Bulwark perk, increasing the strength of Heir Apparent's shield and partially reloading your weapon when destroyed.