The spooky season is in full swing, and as you’d expect 4v1 slasher simulator Dead By Daylight has been reveling in the festivities with the Haunted By Daylight event. There are tweaks to the main game, Blood Points aplenty, and of course, some event cosmetics. Survivors get shirts with skeletons that reflect their hobbies and personalities while the Killers get delicious and deadly candy weapons.

Of course, given the range of characters, these items are varying in quality, ranging ugly to gorgeous. Which players in The Entity’s game have the best Halloween looks? Here they are, ranked. 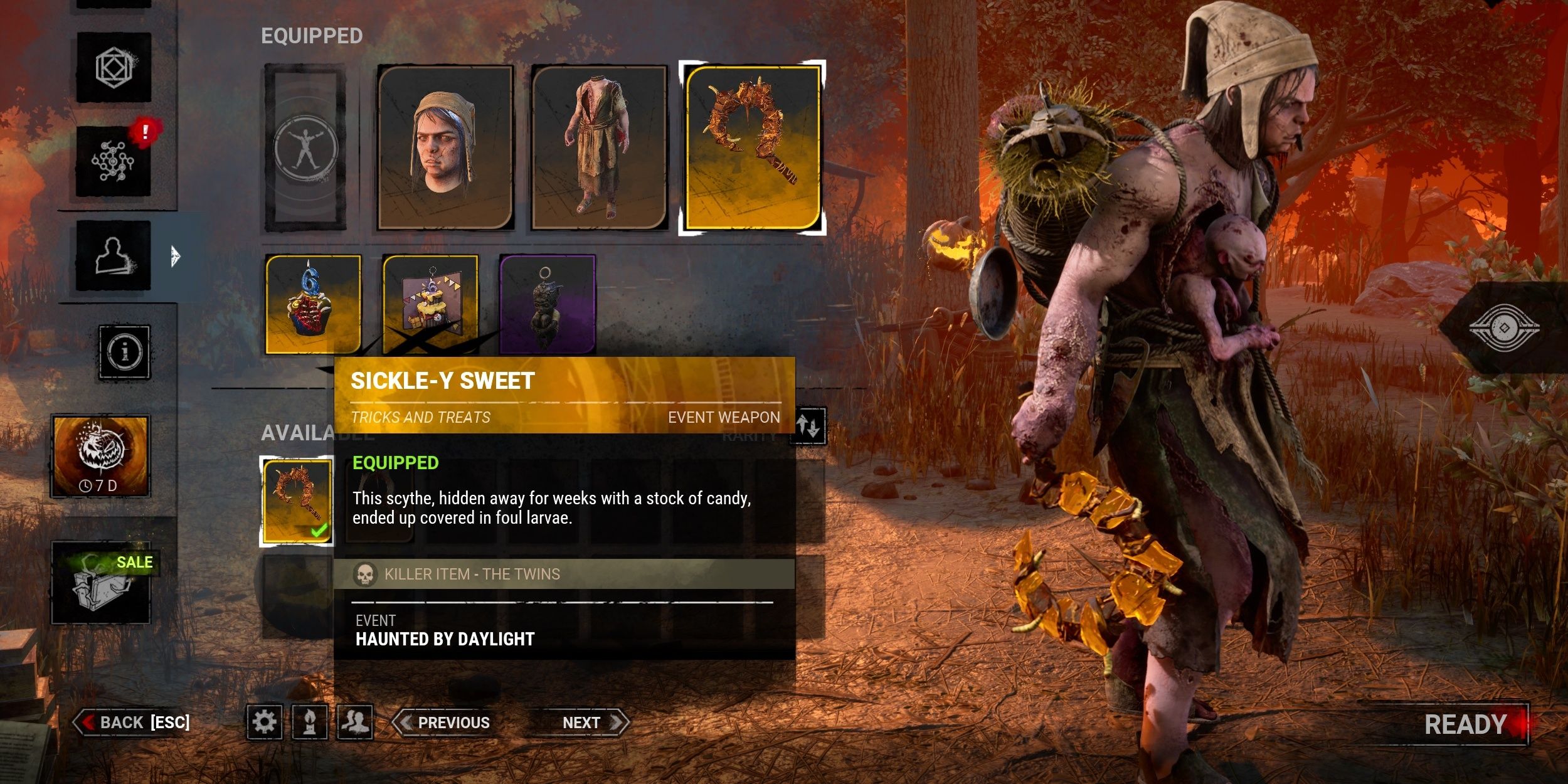 The longer you look at this hideous armament, the more hideous it gets. The melted candy on rusted metal look is fine, if done better for the Hillbilly. The ‘foul larva’ somehow looks very upsetting, and yet not upsetting enough, since they're cartoonishly big, but the details are pronounced in a wholly unwholesome way. The hay or whatever detritus sticking to the blade makes an unpleasant pattern that gives off an itchy feeling. 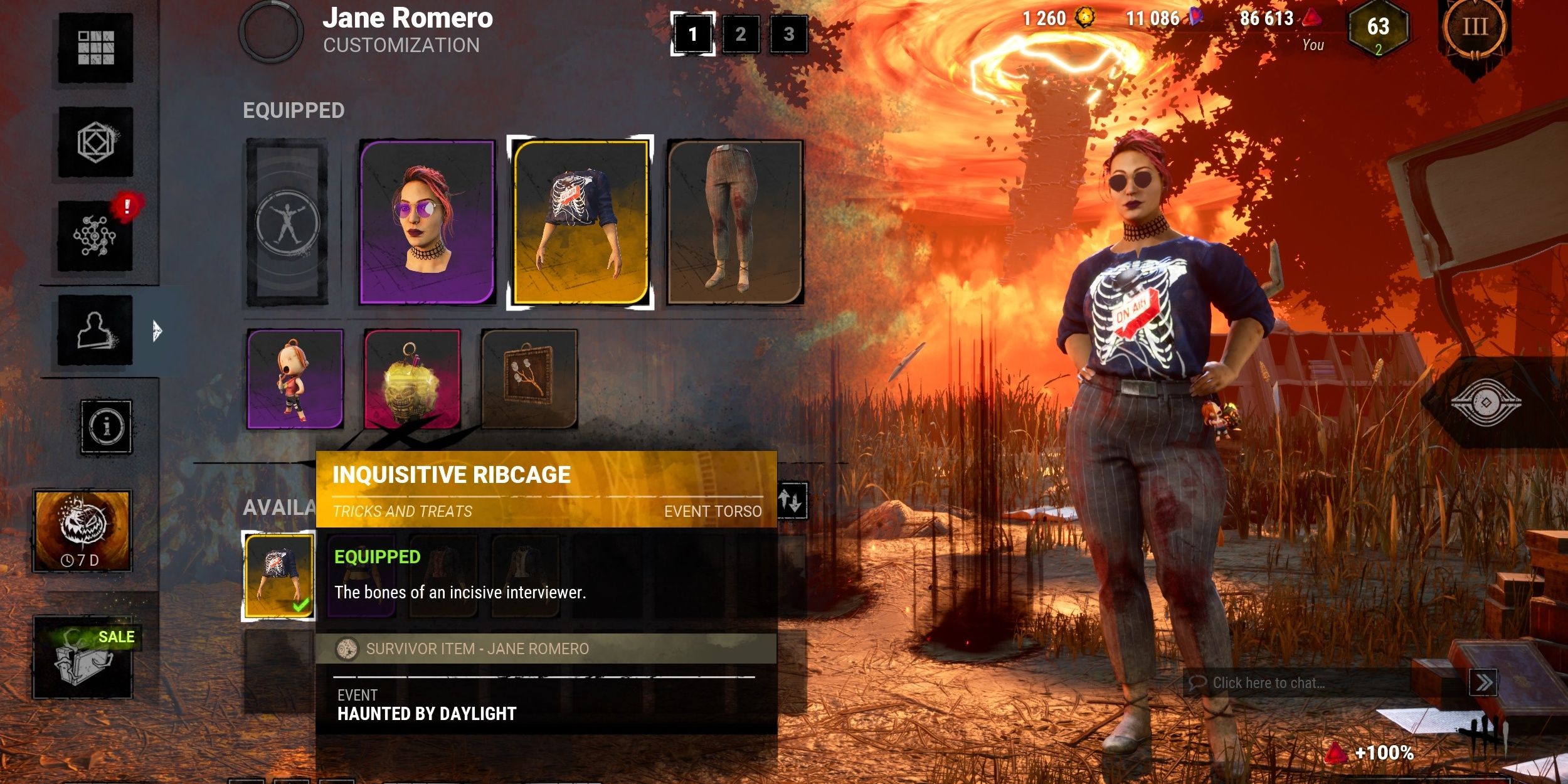 Unfortunately, this just doesn’t look good, it suits her only in that it references her career as a radio personality and interviewer.

You don’t really get much, and what you do get is boring, but it stands out in a bad way. The other shirts do a much better job of integrating their objects into the skeleton, but her props clash with it and end up looking just slapped in. At least the shirt looks comfortable, if nothing else. 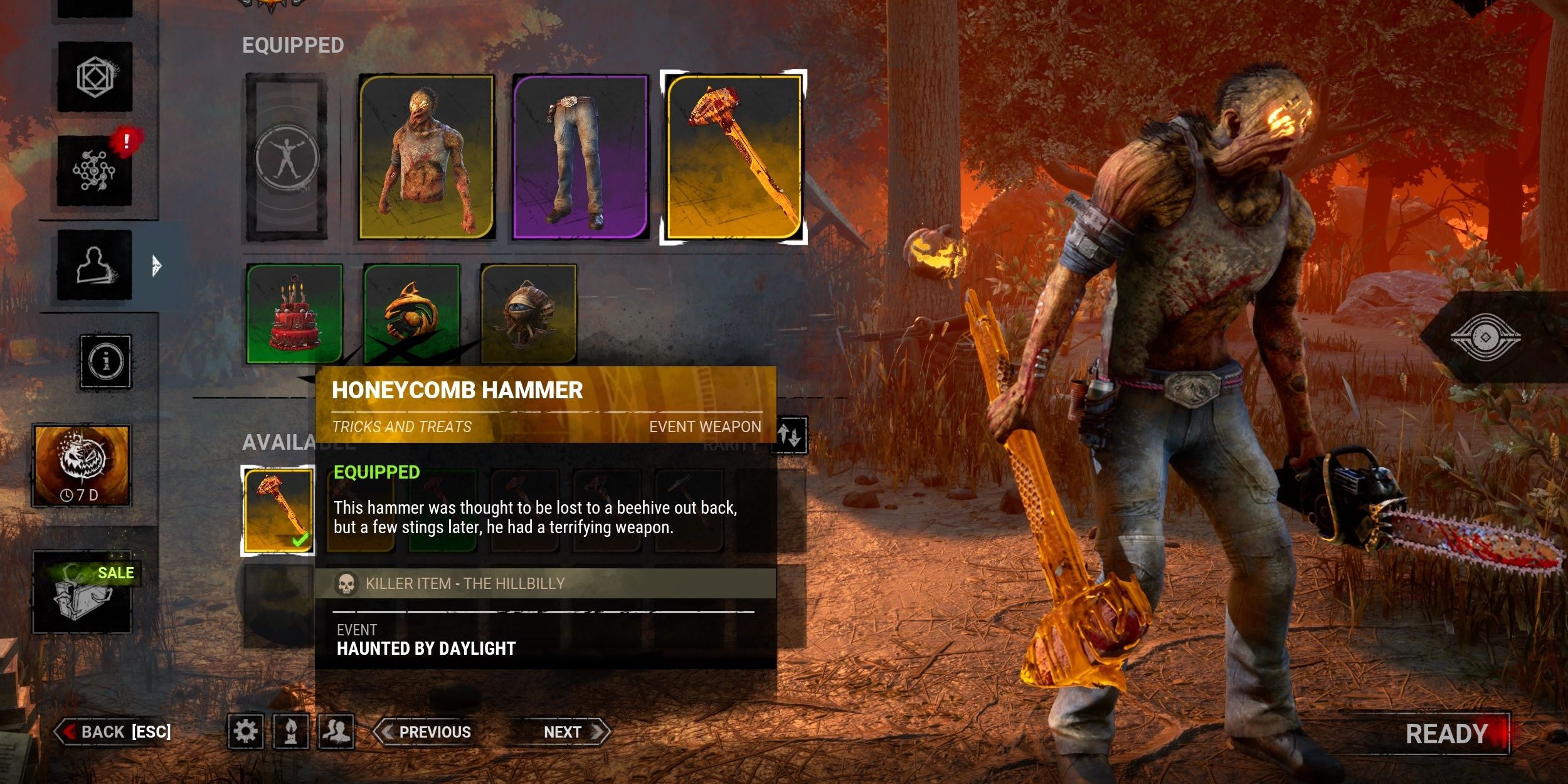 A suitably gross weapon for a malformed killer. The weapon looks unpleasantly sticky in a way that suits our non-licensed chainsaw boy, since he probably doesn’t care about the joy of a clean weapon. The bees are a nice touch, being a subtle and effective accessory.

If you have trypophobia, you’ll want to pass this by, since the honeycomb pattern is a big part of its design. If you don’t, do not look up that word, or you might just get it. 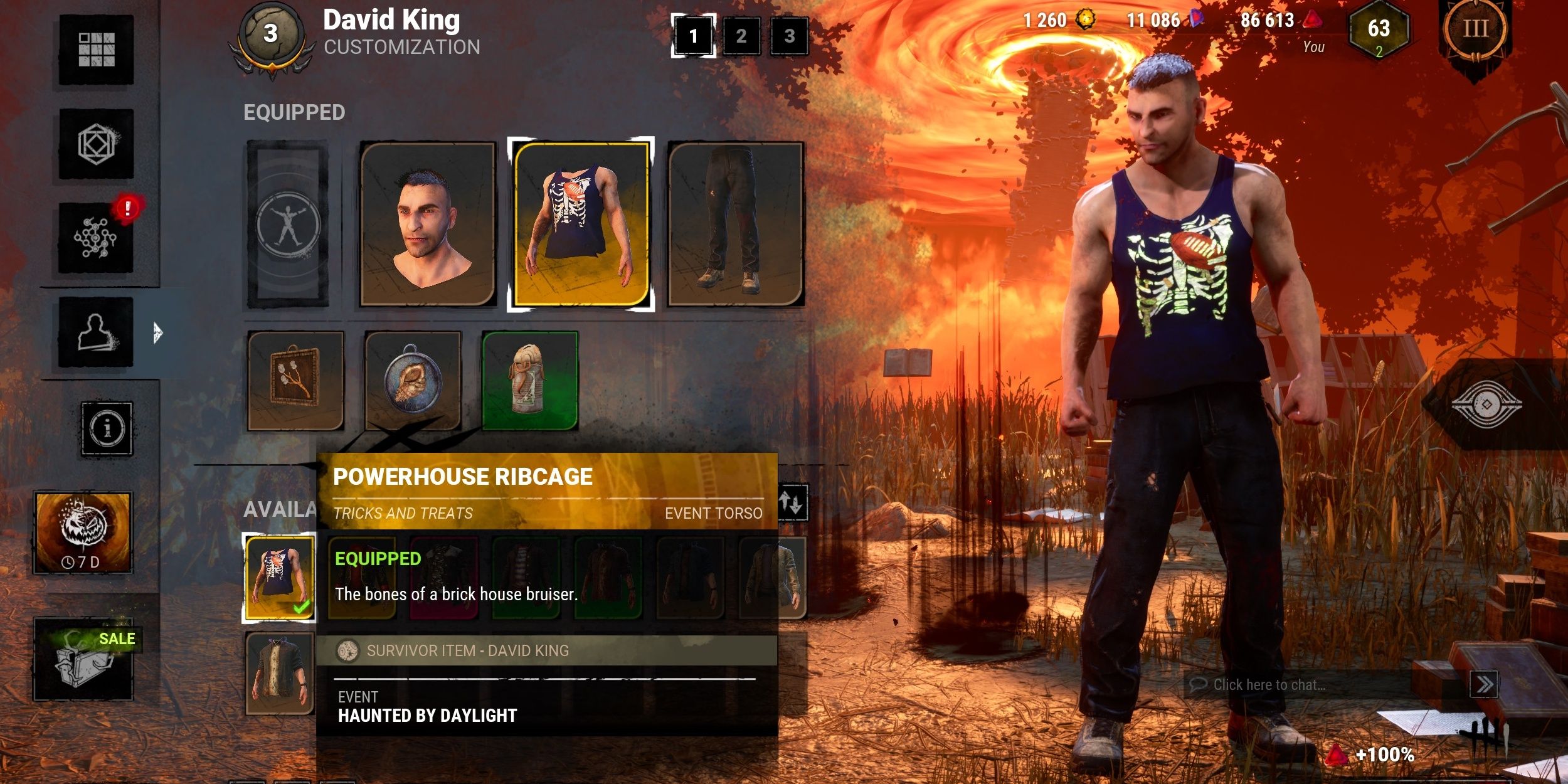 This would be tacky on anyone else, but on David, it works really well. Maybe it’s all the muscles. Free of his jacket, you really get to see how jacked he is, which is fitting, given his rough-and-tumble personality before he was taken by The Entity.

His bones look a little more damaged than everyone else, which is fitting, given his history. The rugby ball is a nice touch, since was a rugby player. If there’s anything to complain about, it’s that as good as he looks in it, the shirt is actually pretty bare in detail, giving the impression that it’s actually David on display. 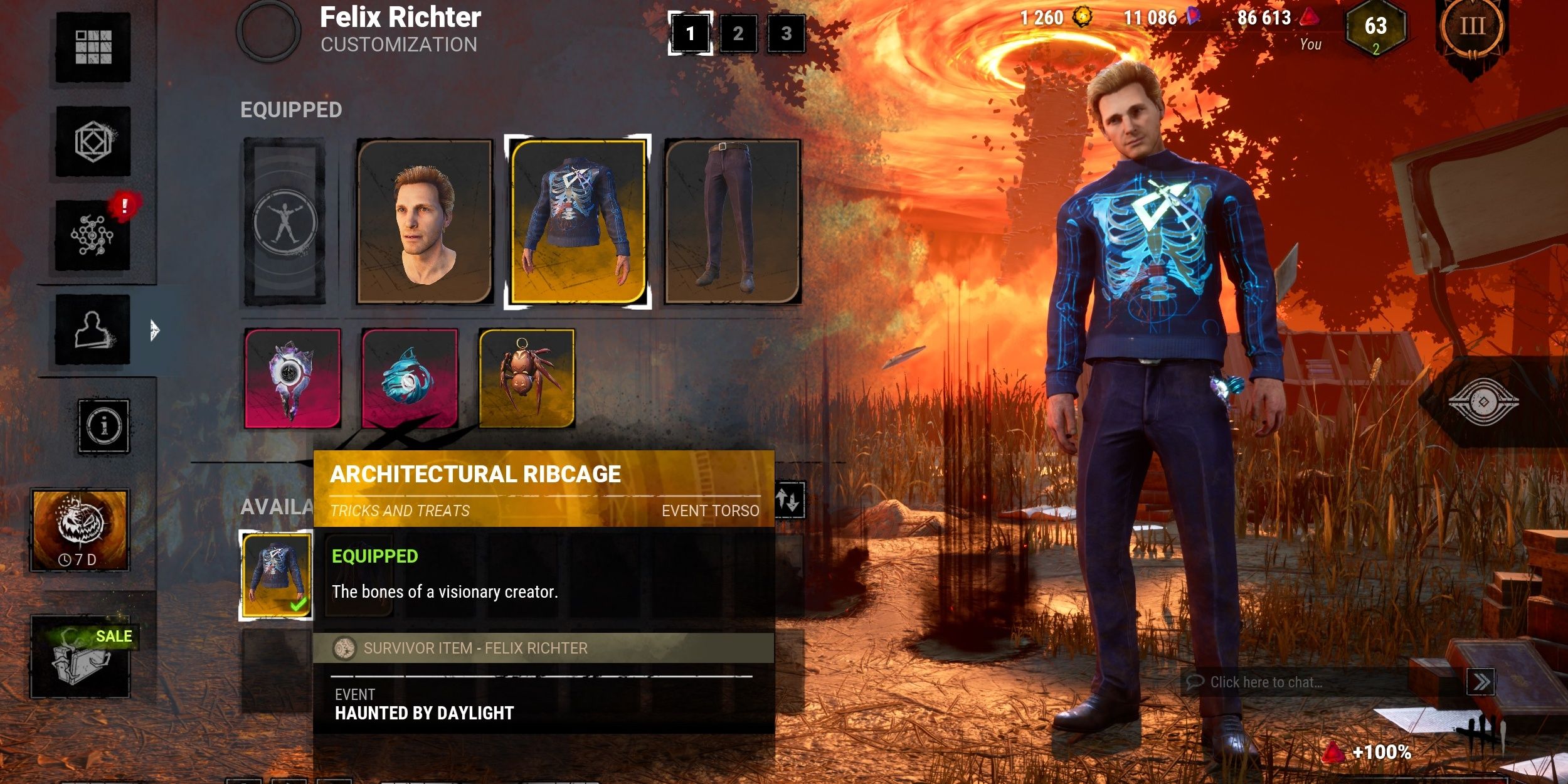 This cozy sweater is just a little loud, but not necessarily unpleasant to look at. It does a good job of highlighting Felix’s love of architecture with the lines that evoke blueprints, which are especially noticeable in the places where bones or parts of bones are absent, like even if they are missing, he has a plan to rebuild.

The set ruler and compass set over his heart is a nice touch. They bring the whole image together, giving it all the look of a math textbook. 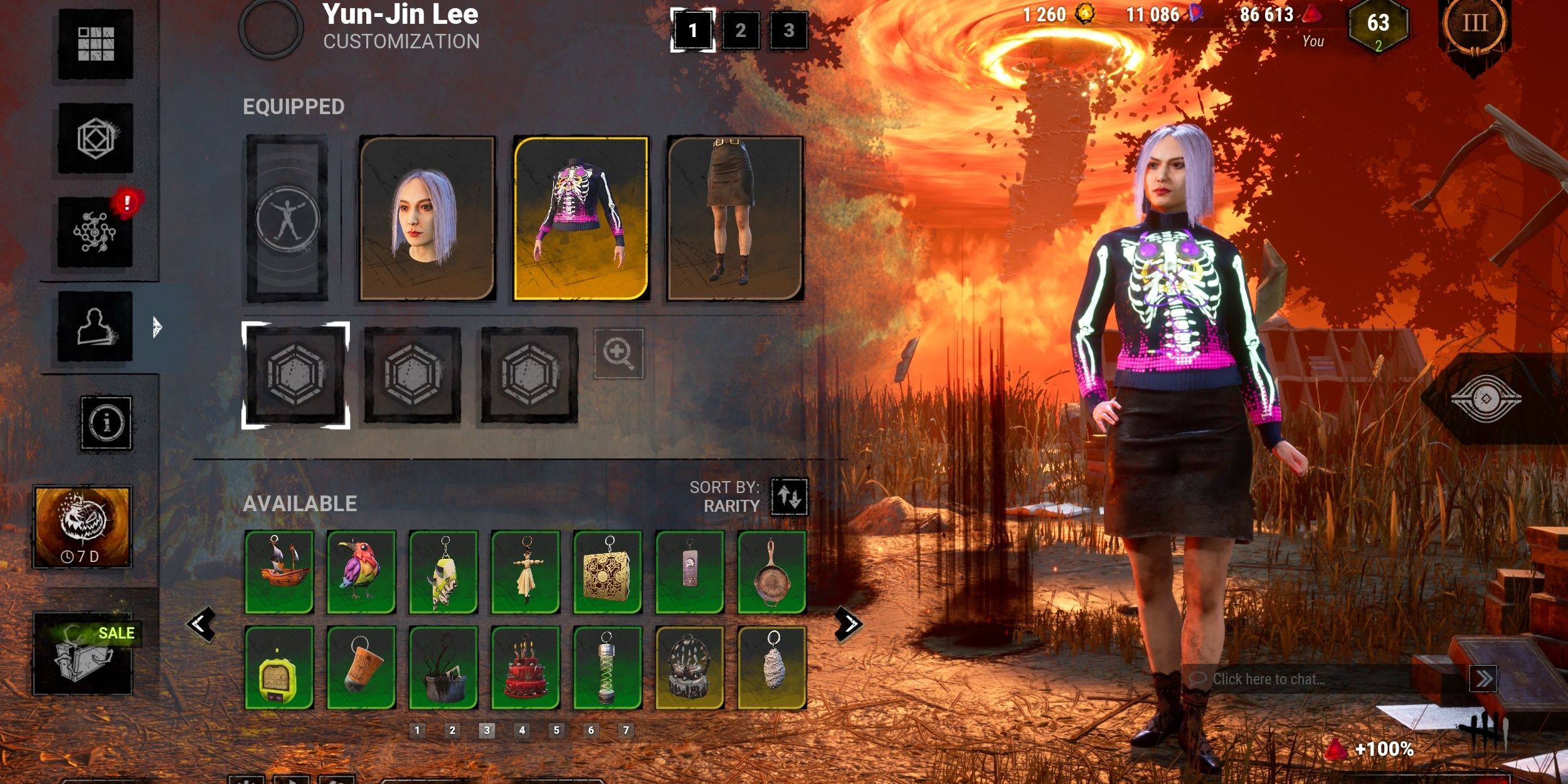 Yun-Jin’s sweater is a vibrant representation of her love of music, but it misses the mark in a few ways. That being said, it actually looks attractively bright and eye-catching, which is something you may not actually want in a death game where a Killer is looking to skewer you.

The sound visualizer pattern along the bottom of the sweater is cool, but other than that, the design is a little bare. She likes music, yes, but she’s also a successful producer — was there no room in the design for a platinum record? Also, the headphones don’t strongly read as such, though the wire wrapping around the ribs and sternum is a nice touch. 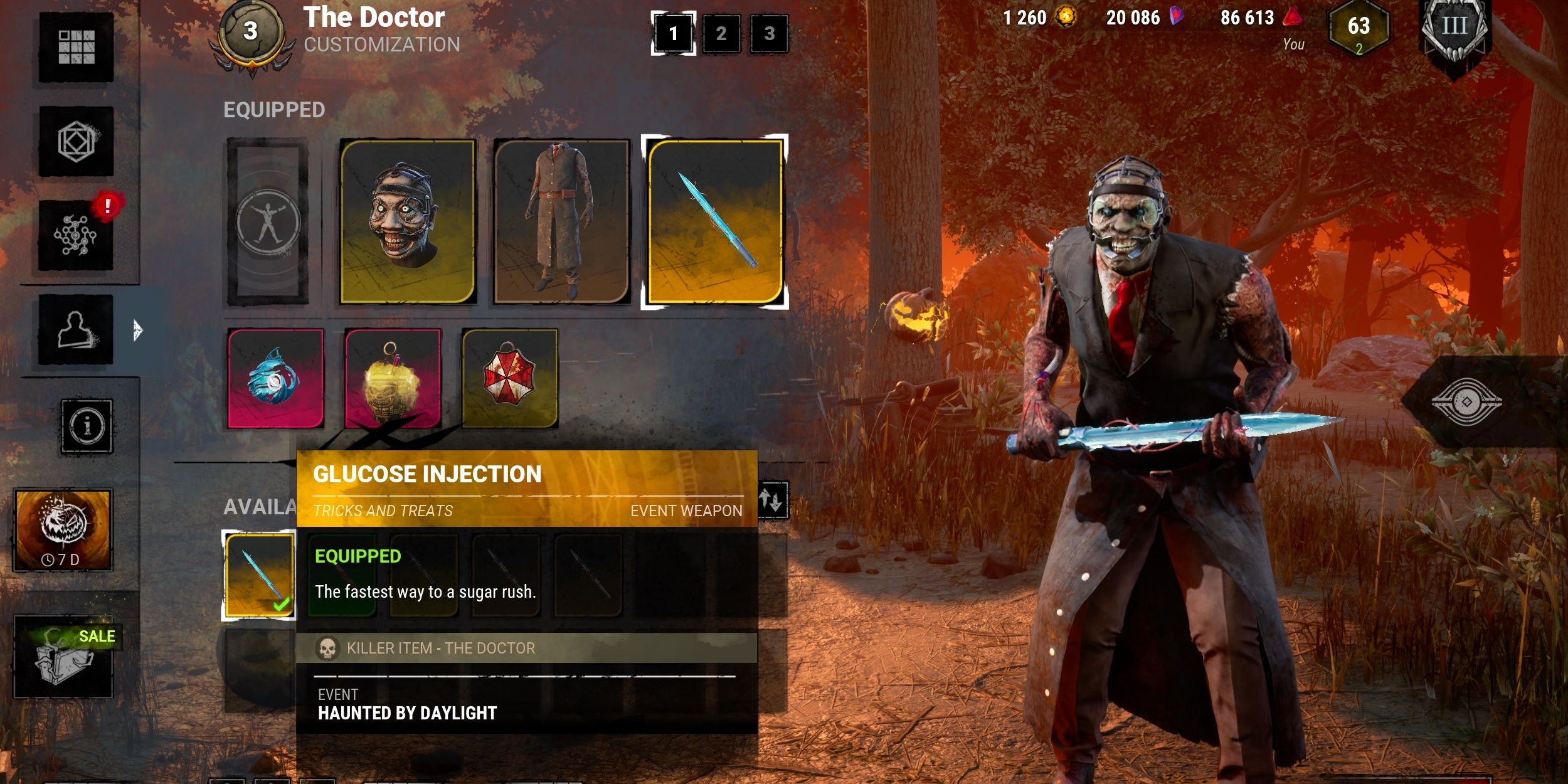 Though it’s a little simple, the Glucose Injection gets a lot of bonus points for being the most delicious shade of blue known to man. It’s kind of a cool concept as well, being a mass of sparking electric wires suspended in a giant rock candy rod.

Fun fact: glucose is actually not very conductive, so the shock comes from the exposed electric wire as opposed to contact with the candy bludgeon itself. 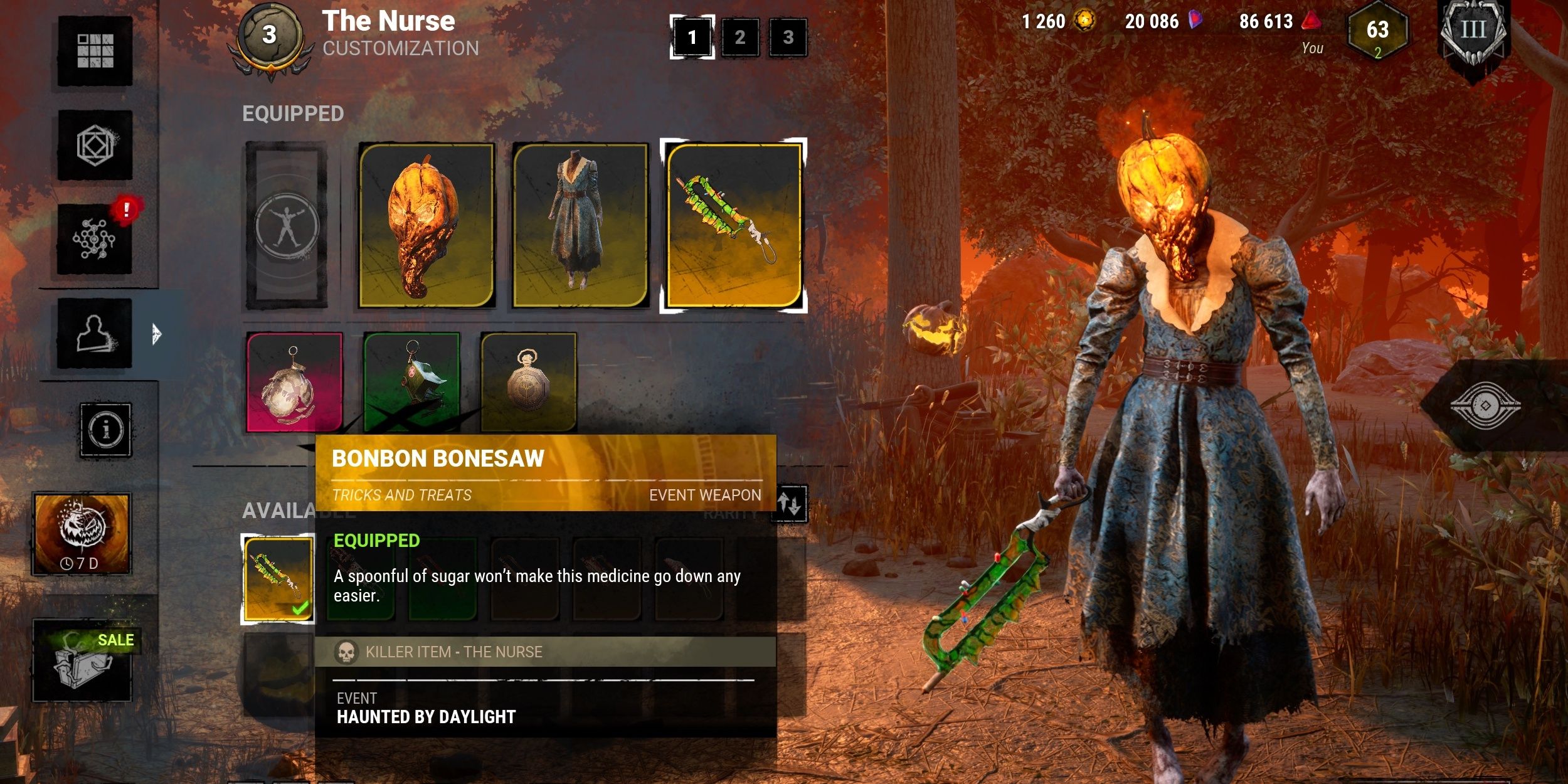 Garish and yet endearing, the Bonbon Bonesaw does a good job bringing some levity to an otherwise tragic character. The green candy coating the implement has is somehow both terrifying and tasty-looking and the pills stuck in it are a nice humorous reference to her previous occupation.

A subtle and humorous addition to what would otherwise be a candified pallet-swap of her standard bonesaw is the syringe sticking out the end of the blade. 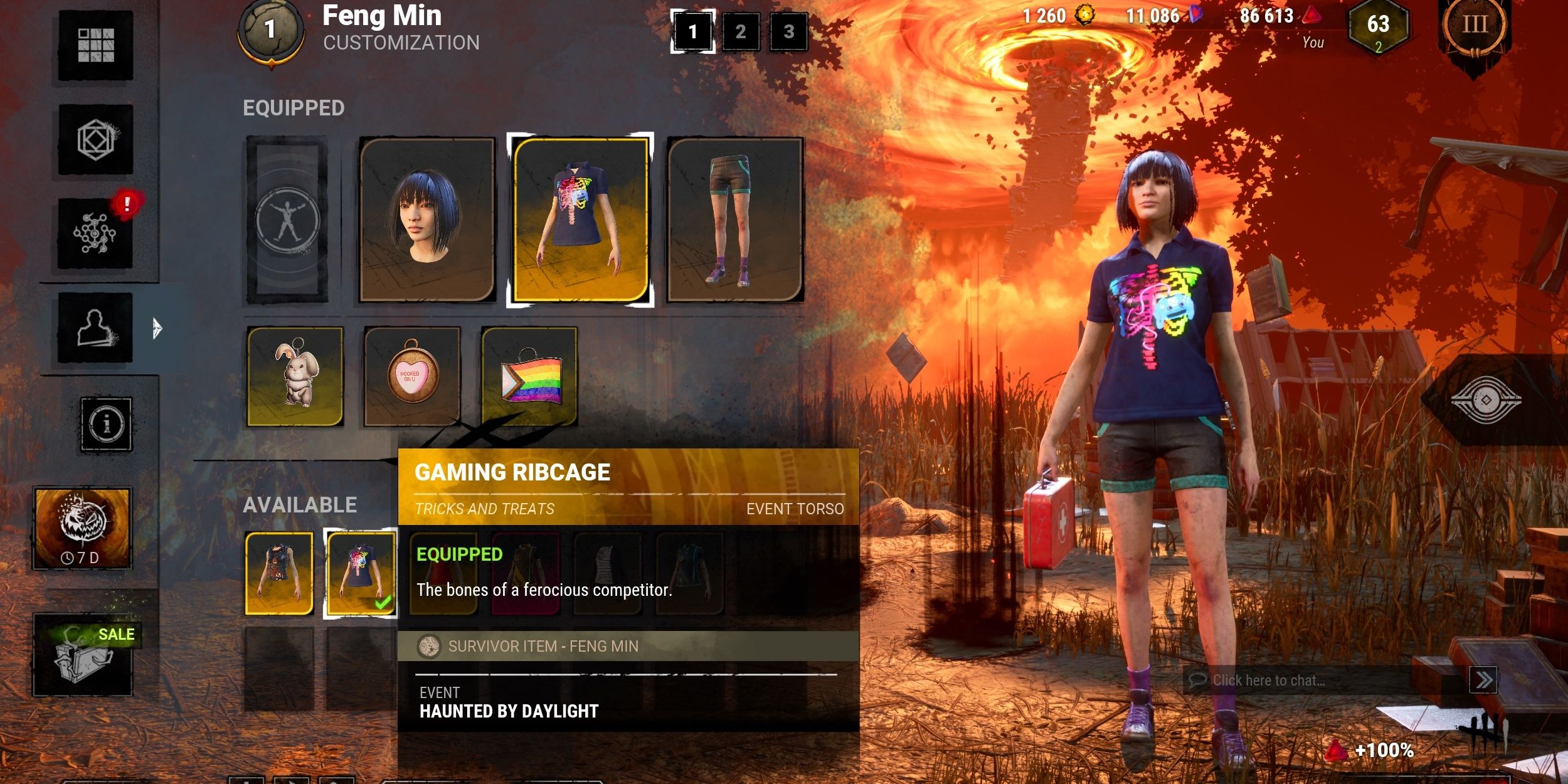 This pixel rainbow ribcage is almost too on the nose for the resident gamer girl Feng Min, but its otherwise understated design pulls it back enough to be the perfect look. The blue-and-white color scheme of the controller does a good job of drawing the eye and works as the perfect counterpoint to the rainbow colors.

Making it a polo shirt is also a nice touch, since it adds to the whole e-sports competitor aesthetic that she has. 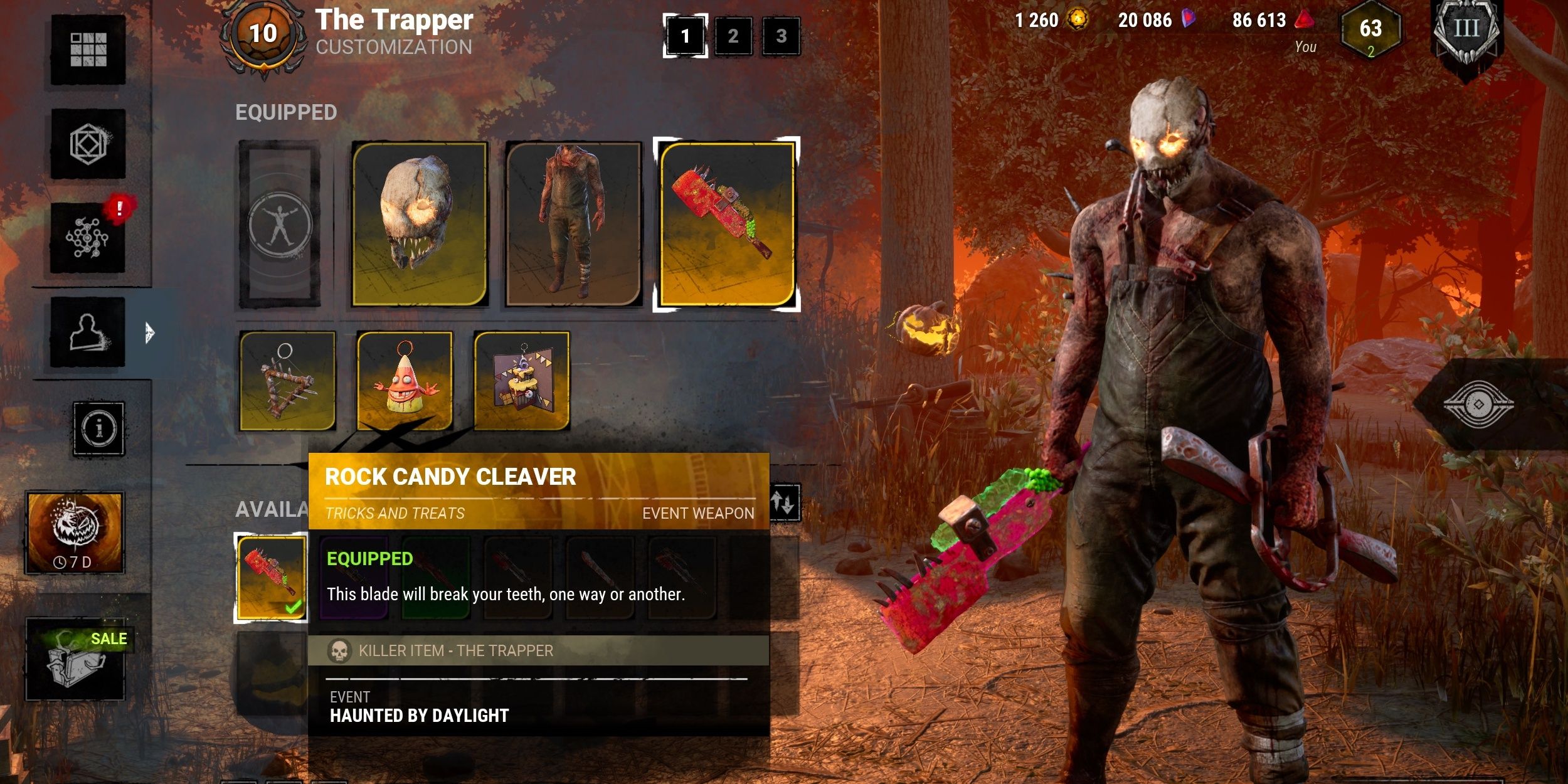 This bright neon murder implement really clashes with the Trapper’s overall ‘backwoods murderer’ vibe, but for some reason, it just works? Maybe because just on its own, the weapon is really cool-looking, just the right mix of tasty and lethal.

Still, the rusted metal accents and oversized screws really make the weapon the Trapper’s own, as opposed to just another candyland machete. 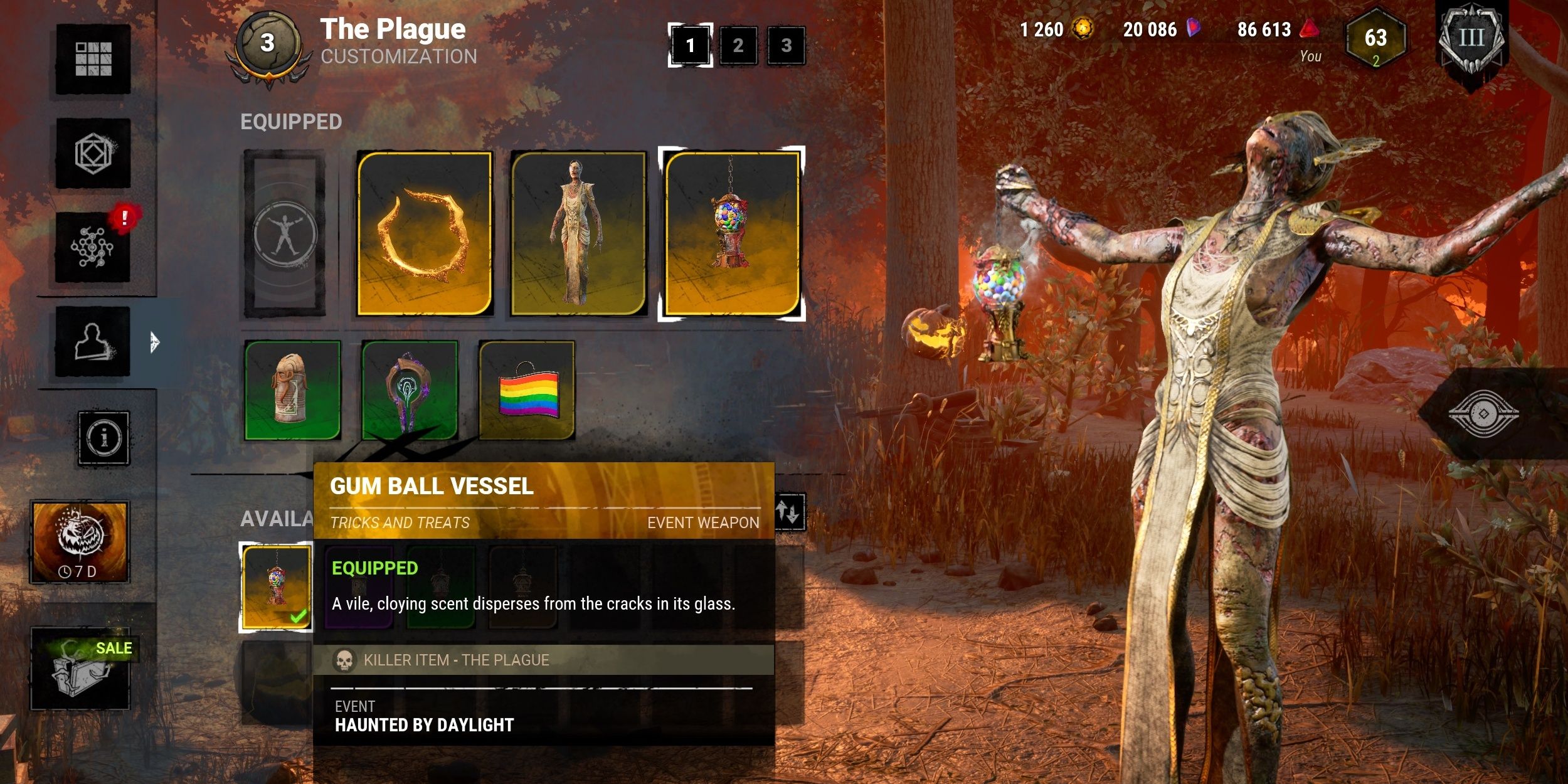 An unusually cute armament for the intimidating seven-foot tall Babylonian priestess, the Gum Ball Vessel is pretty charming, especially if you grew up seeing candy dispensers at the grocery store and begging your parents for a quarter to get a treat.

Of course, in the hands of the Plague, you’re more likely to get a head injury than any sweets, and some smoke inhalation to boot, since for some reason, this gumball dispenser is smoking like one of her censers. 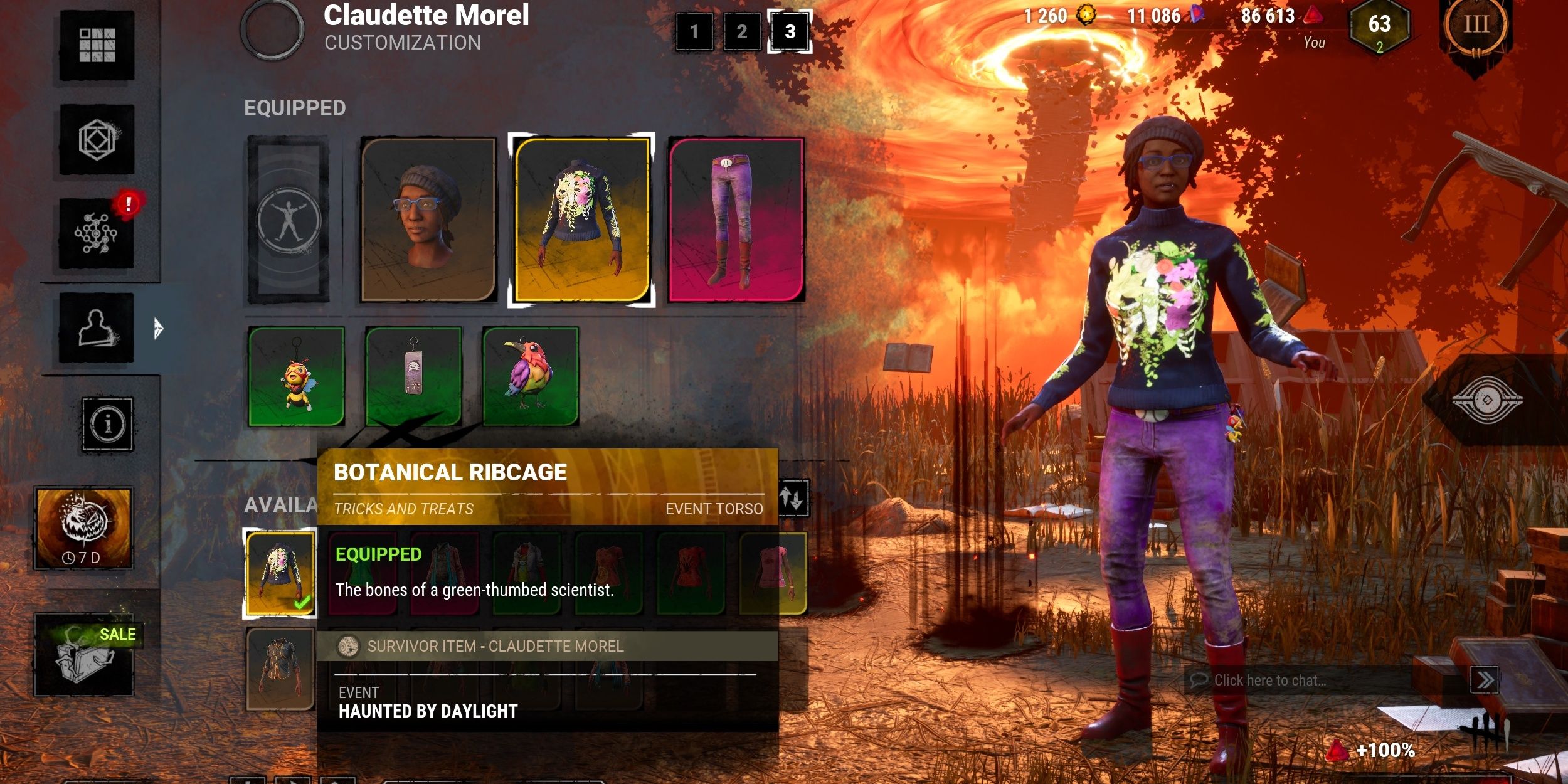 The best of the Ribcage cosmetics, this sweater is almost perfect in every way. It’s very representative of Claudette’s love of botany in a way that doesn’t feel hokey. It’s a vibrant horticultural collage that is bursting with color without ever looking noisy. This design would be as at home on a canvas as it is on this sweater.

And the sweater itself is pretty fashionable, looking cozy without being tacky and as such, goes pretty well with a lot of Claudette’s more ‘normal’ pants and hats. BHVR did not need to go this hard, but it’s certainly welcome. 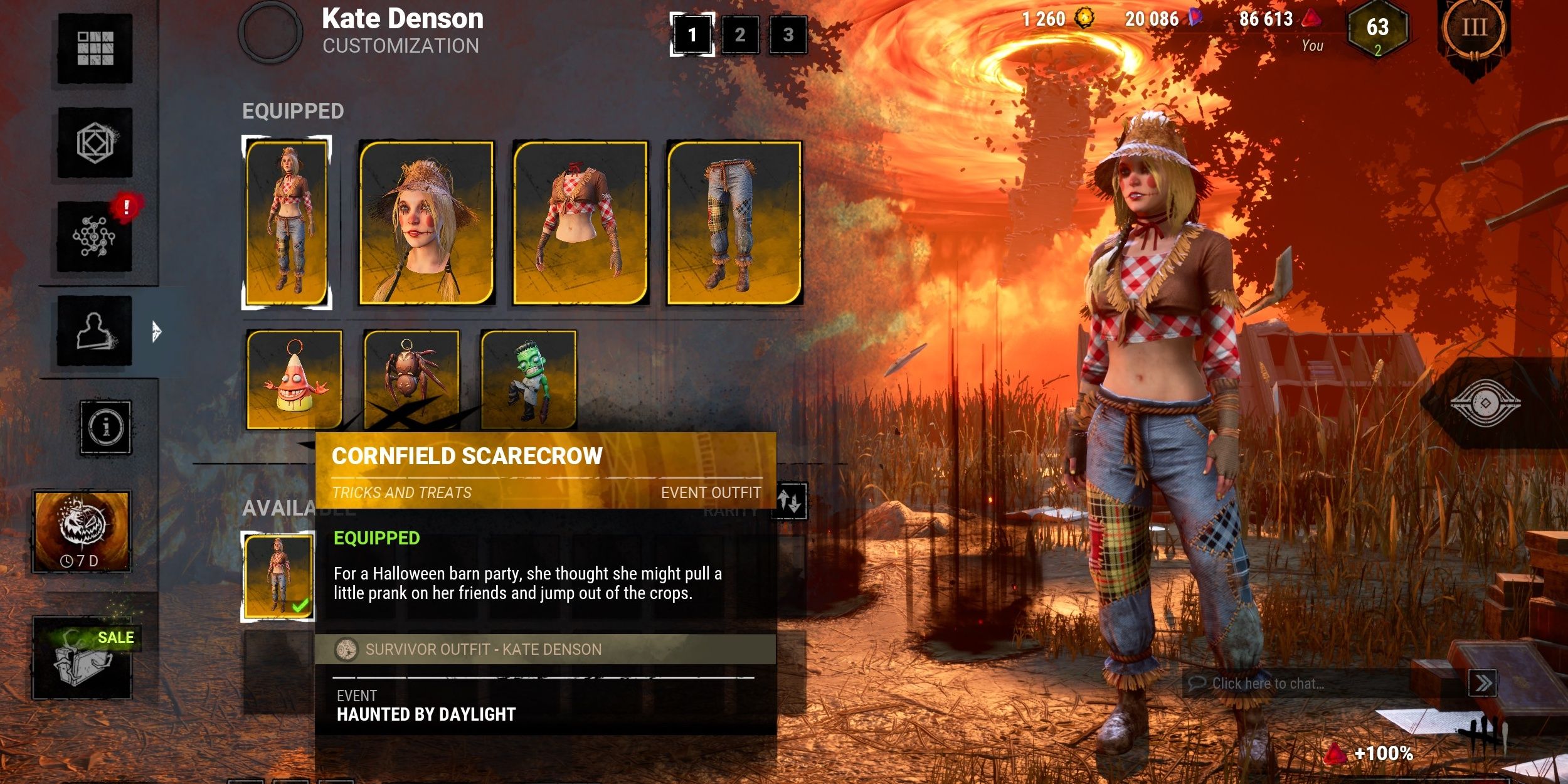 The cutest scarecrow in The Entity’s realm, Kate looks absolutely adorable in this outfit, especially since all the straw decorations go well with her hair. She also kinda looks like one of those old-timey Raggedy Ann dolls, though the bare midriff might be too daring for old-fashioned sensibilities.

She looks at home in any corn map, maybe if you stand still among the stalks, Killers might just mistake you for a part of the terrain (unlikely) and you might even give the Artist a scare (most definitely not). 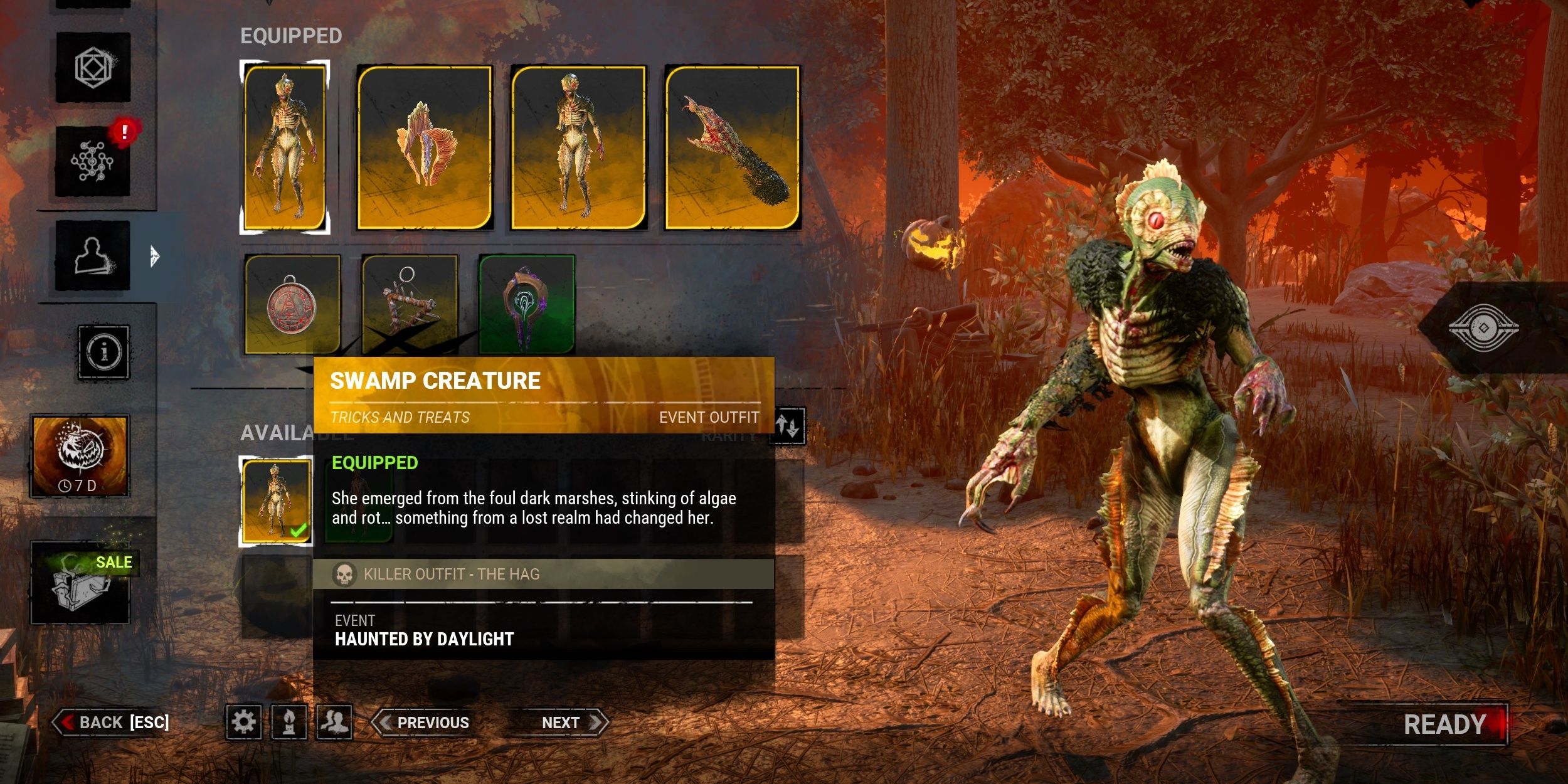 An homage to the classic movie horror monster, this is less a Hag skin and more a full-on transformation. It’s one of the better free cosmetics BHVR has given out, given how different it is from the base Killer.

Though it’s an homage to the Creature of the Black Lagoon, the skin has a look all its own. It’s decidedly more piscine than its inspiration, with its side-set eyes and piranha-like maw. It also has claws that are far more wicked than its inspiration.