Despite it being six years since the launch of Dark Souls 3 in 2016, the game continues to be both unforgettable and legendary in its scope. From the enigmatic Nameless King to frustrating, gimmicky boss fights like Yhorm the Giant, Dark Souls 3 gifts you with both beautifully designed bosses and equally magnificent arenas to match.

Whether you're dodging attacks around a giant mausoleum or finding yourself tossed into the air in a realm of fog, these boss arenas are as atmospheric as they are unmatched. 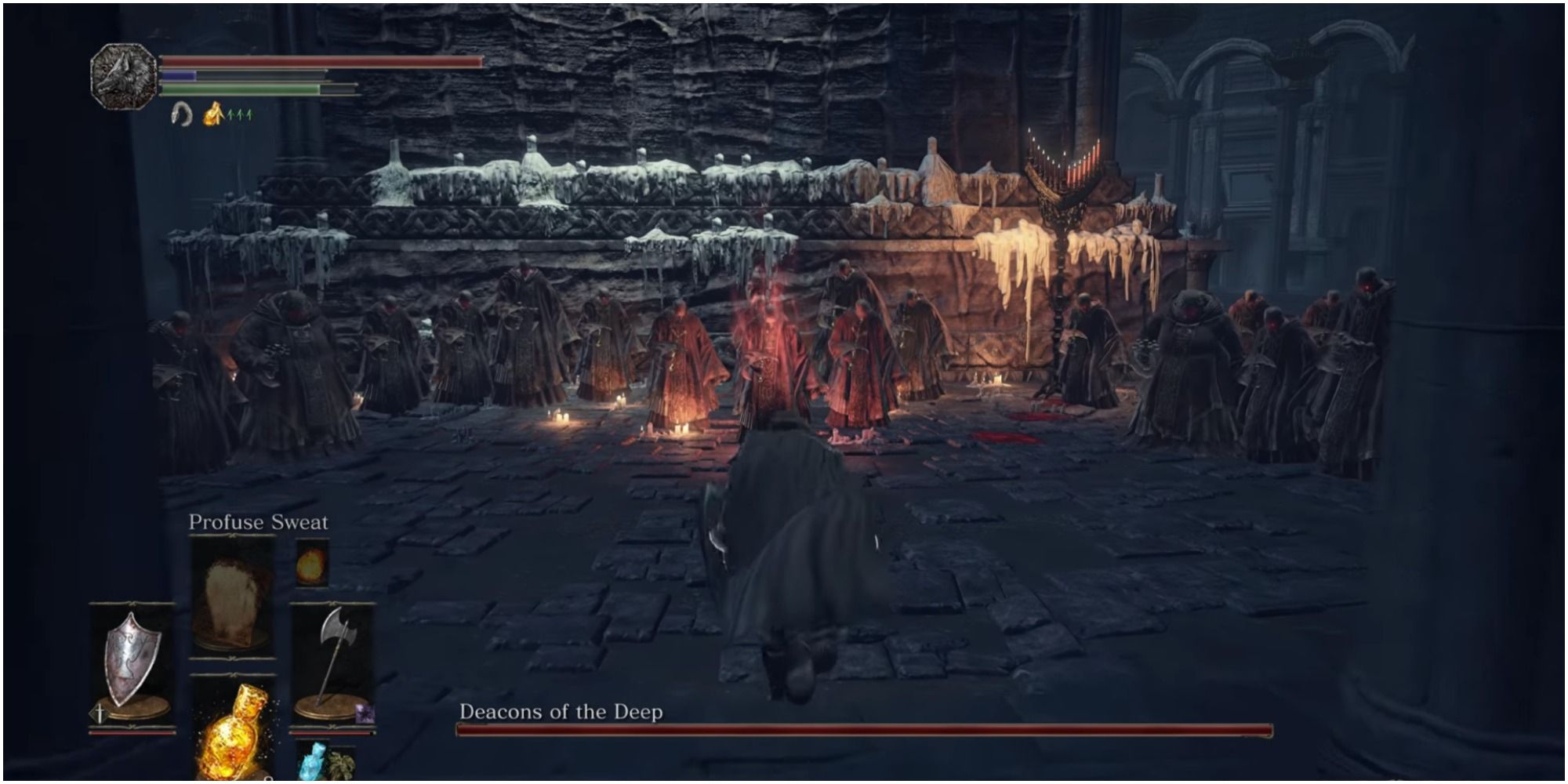 After traversing a massive booby-trapped cathedral, you'll have to walk past a fog wall to face the Deacons of the Deep. Facing an army of wrinkled, red-eyed, demonic priests in a large mausoleum is certainly something you don't want to face at night.

Armed with candlesticks that pack a punch, you end up running around in a circle as you try not to get overwhelmed. Paired with the choir and organ music in the background, you're in for one heck of a church service with some murderous priests. 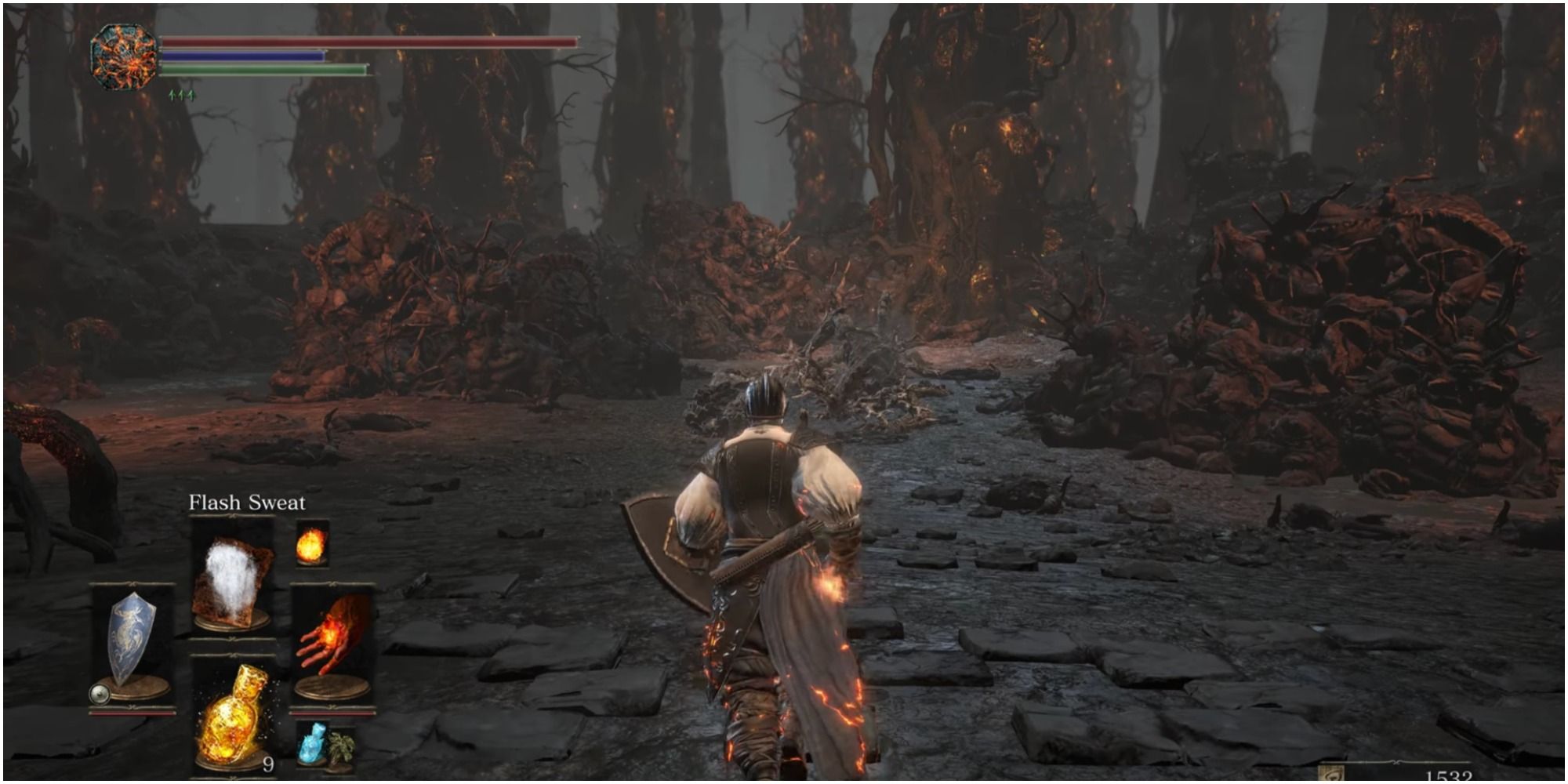 Both tragic and horrifying, you will soon realise why the moment you take a closer look at the Old Demon King's boss arena. Of course, you can only do that once you triumph over the realm of hellfire that was his boss fight.

But once you read up on his lore, you discover that he is the last of his kind. And with a dawning realisation, you finally notice that the piles of what seemed like malformed playdough are actually the corpses of his fallen brethren. You have been fighting in an underground mass graveyard all this time. 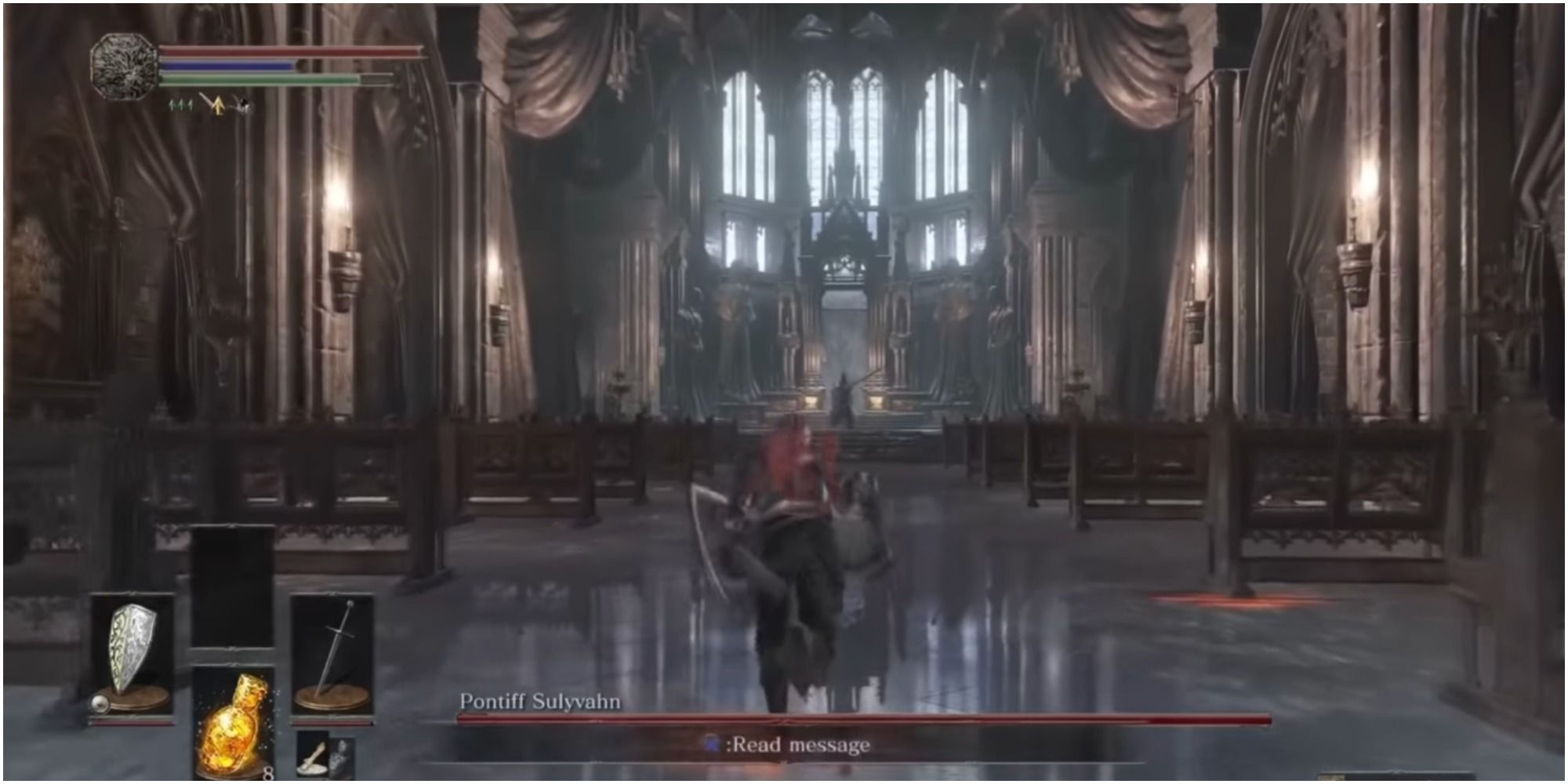 This is yet another church-themed boss fight. Although, it isn't surprising since Pontiff Sulyvahn belongs to the same religion as the Deacons of the Deep. Albeit in a far grander setting, the corrupt Pontiff has no compunction with damaging church property during this encounter.

With a solemn orchestra to back you up, you're fighting a pontiff amidst the pews, dodging swings beneath stained-glass windows, and dancing around the marble floors to escape Sulyvahn's wicked slashes. It sure makes for a godly experience indeed. 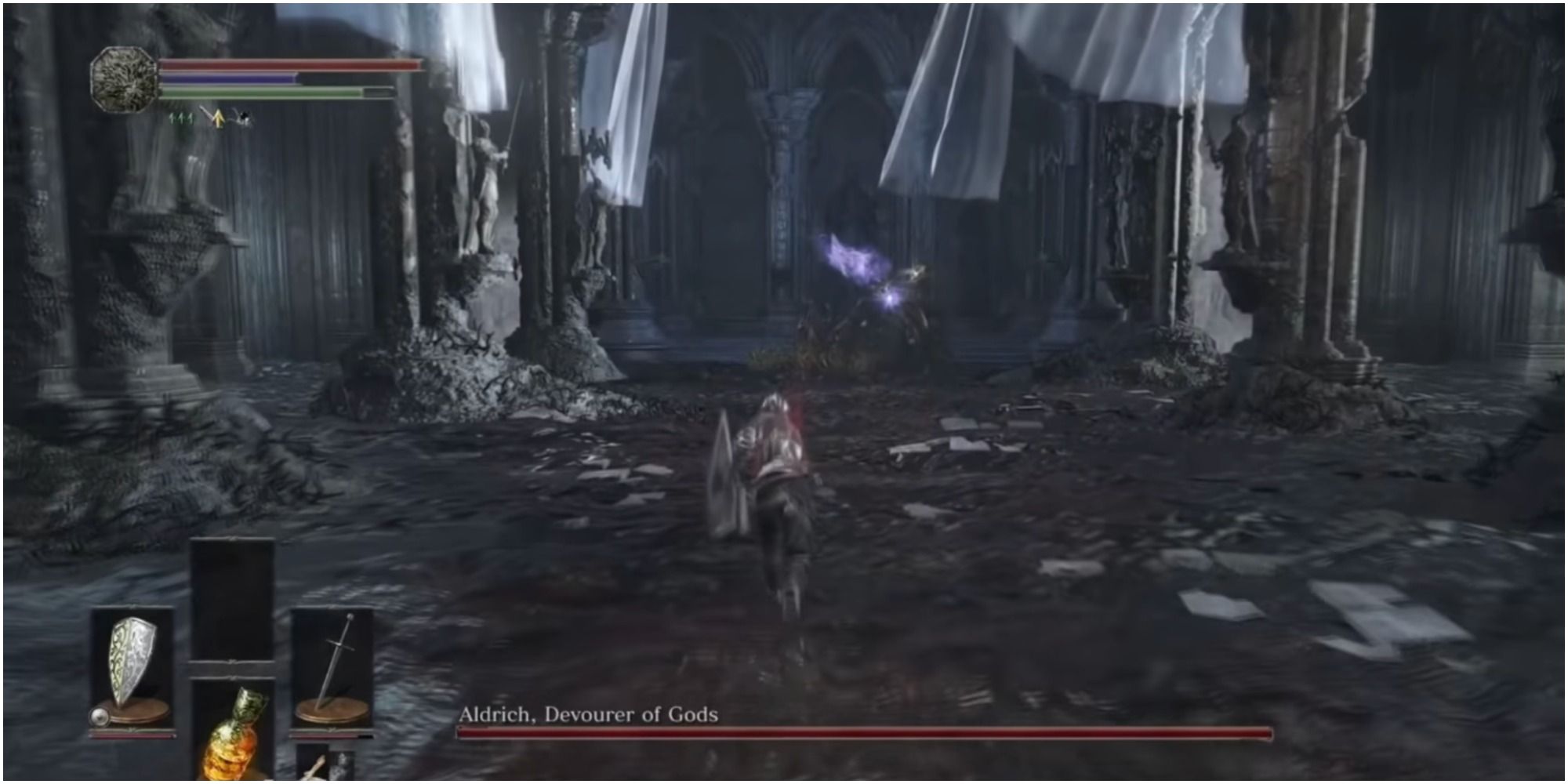 The place sure has gone downhill since your fight with Ornstein and Smough in the first Dark Souls. From a hall bathed in golden light with its golden pillars standing tall and proud, it's now a shell of itself with the glass all shattered and the pillars disintegrating.

The now-ruined boss arena is the epitome of the monster that resides in it. Once a home fit for gods, it is now a battleground for The Ashen One, as he/she faces a cannibalistic sludge bent on devouring everything. 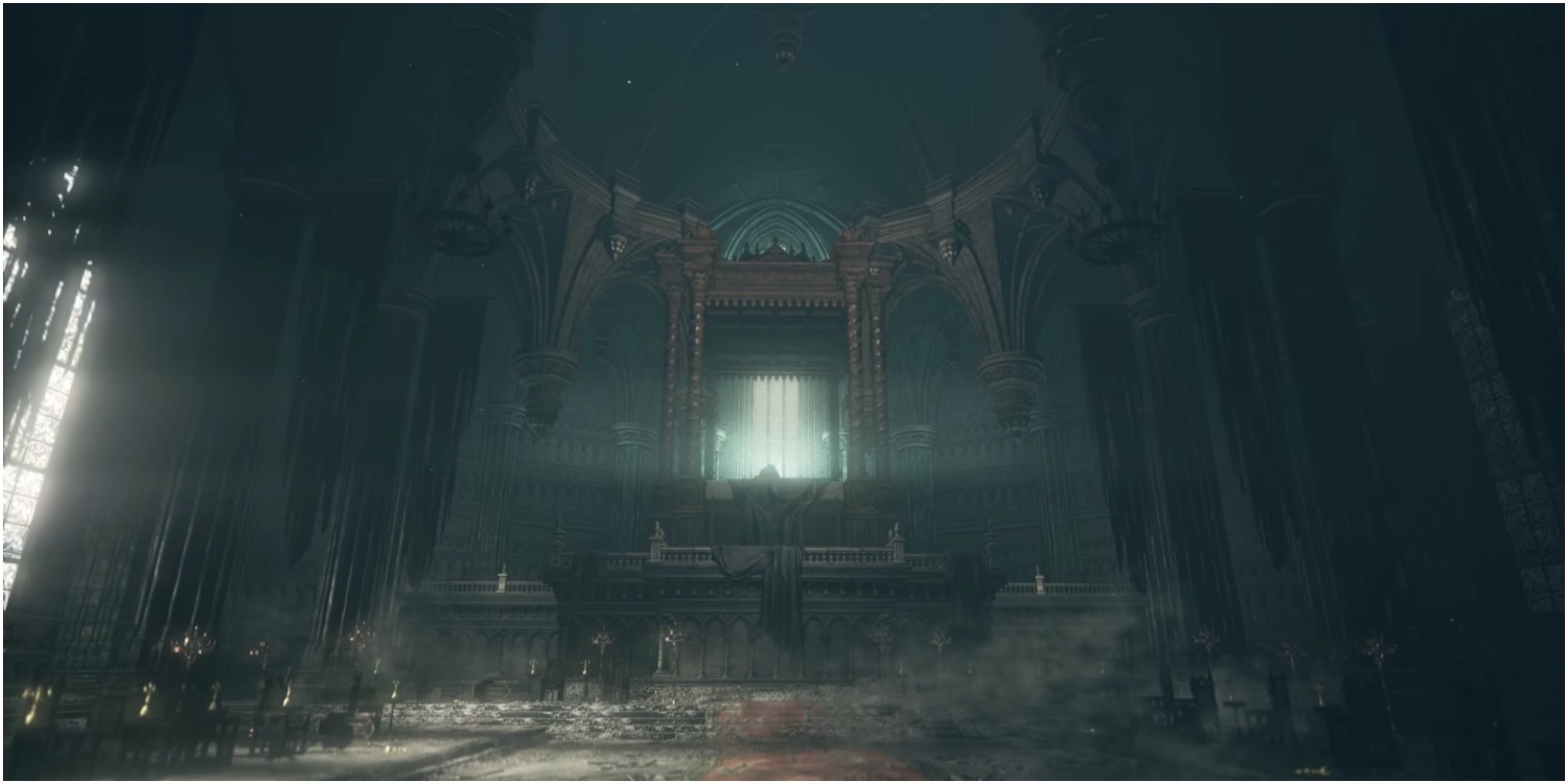 At first, the shrivelled Lothric sits on a giant bed overlooking the grand hall, watching his brother try to pummel you to death, like a king watching a grand tourney. The second phase hits, and the hall turns into a hellscape of magical attacks, fiery sword slams, and the battlefield of desperation and death it is.

5 Soul Of Cinder – Kiln Of The First Flame 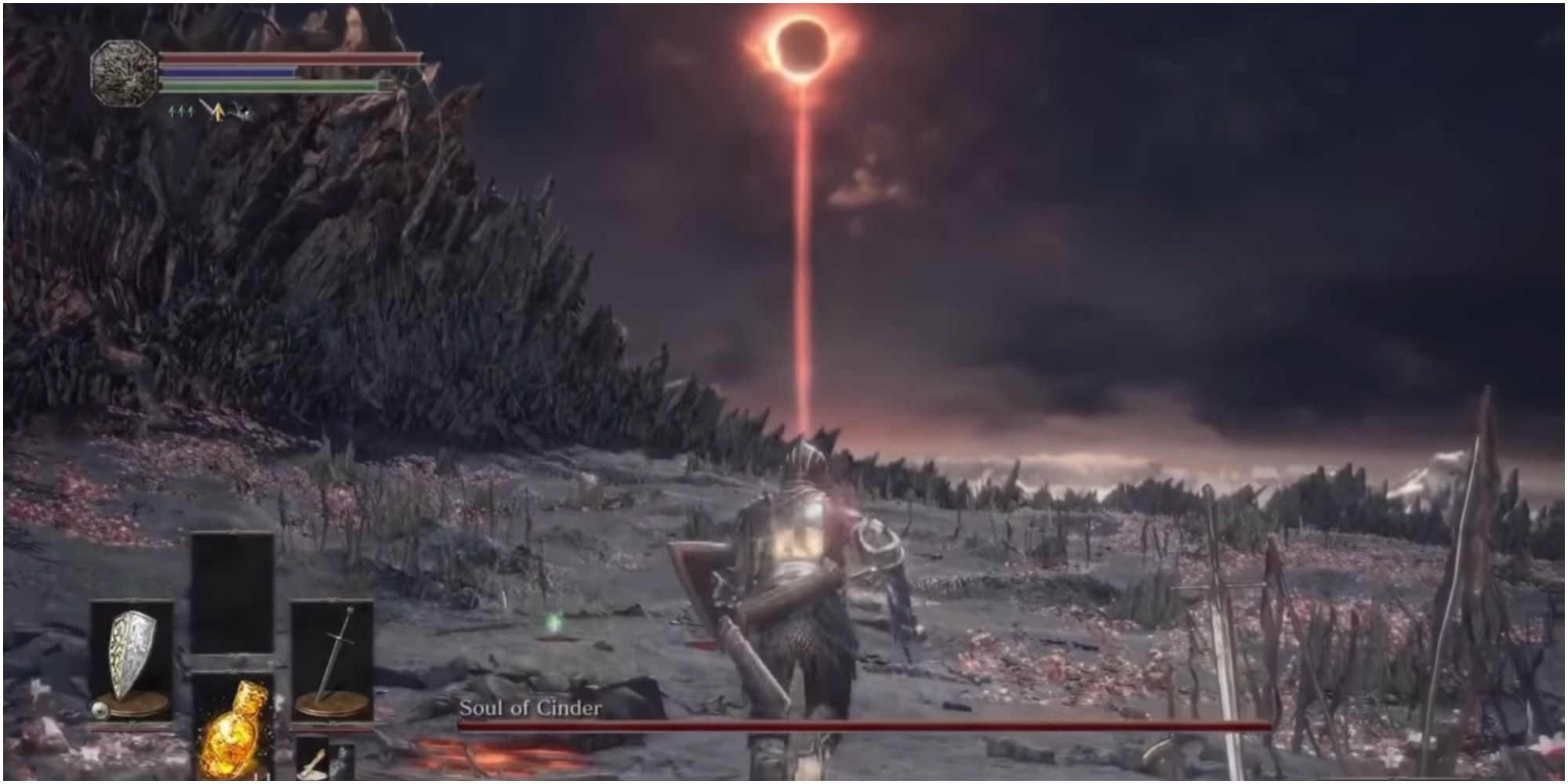 As the game's final boss, it's fitting that the way to end a series is to go back to the beginning. Fighting the living embodiment of all who has ever linked the flame beneath the gold-crimson hue of the Darksign is legendary in and of itself.

Let your blood, sweat, and tears soak into the ground as you clash blades with the Soul of Cinder in a garden of swords. 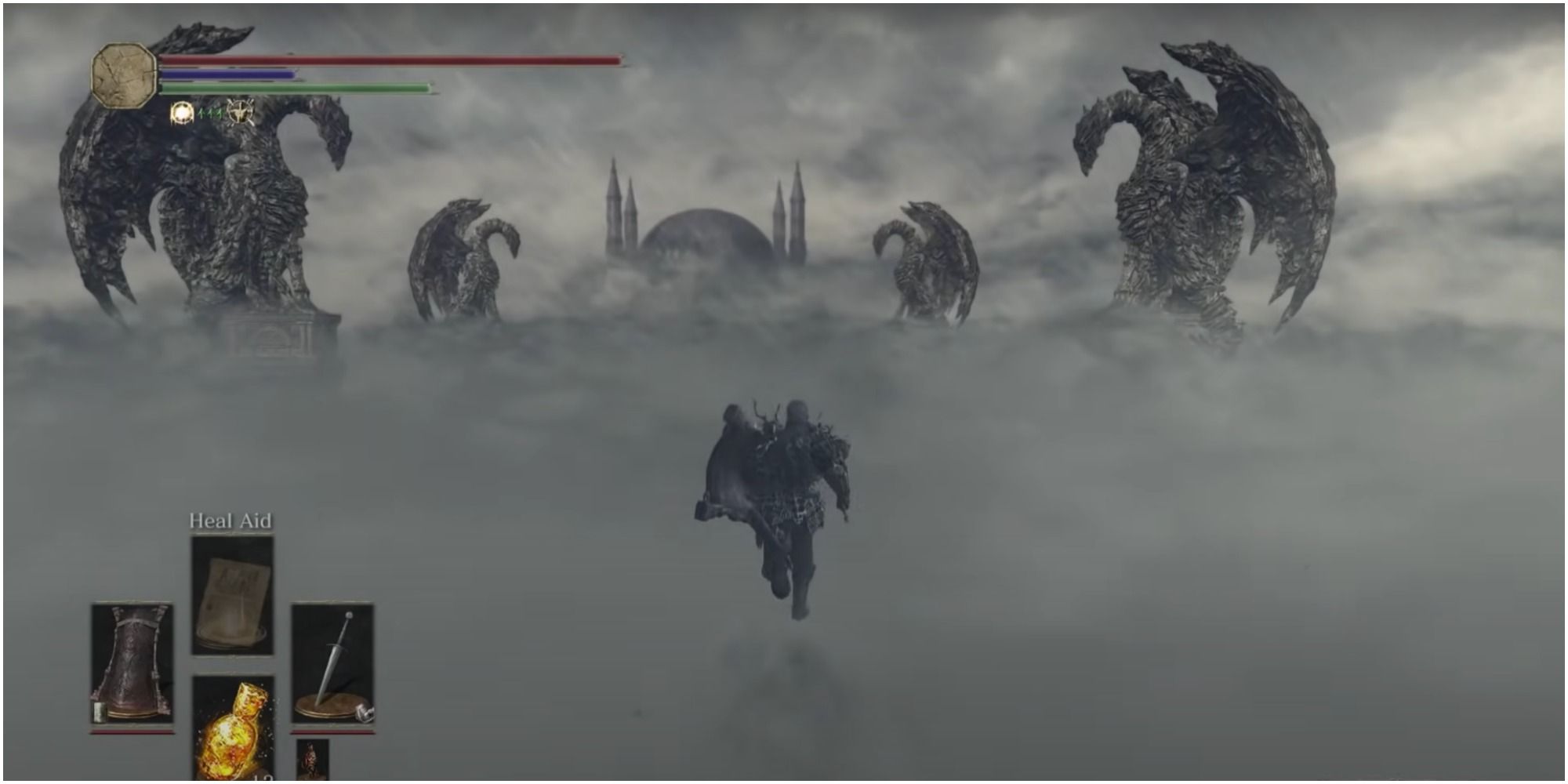 Possibly the most memorable and difficult optional boss fight in the game, the Nameless King's boss arena is definitely one of the coolest.

After ringing a bell, you'll find yourself in a world enshrouded in fog, with the Nameless King lying in wait with his badass mount. As Gwyn's firstborn (allegedly), it's fitting that you'd have to fight him on his own turf, in his personal, misty realm that transcends lowly mortals. 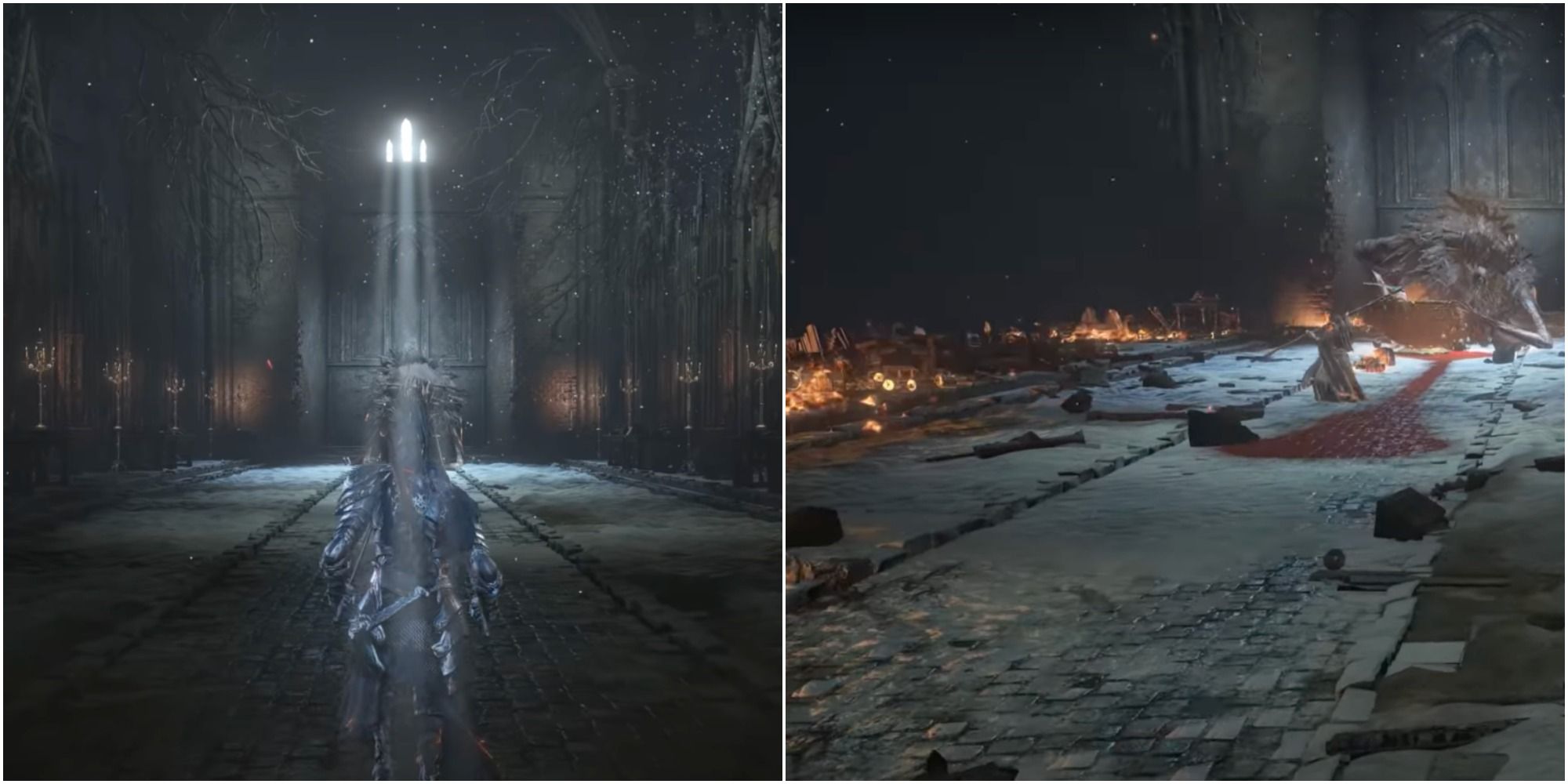 This unforgettable duo certainly has the most phases in the history of Soulsborne games, and their boss arena emphasises the change from calm to utter chaos. Prim and proper Sister Friede was alright trying to take your head off your shoulders with her wicked scythe in that underground chapel.

But it all intensifies when Ariandel tries to do a bit of interior design of his own, committing arson by taking down the impeccable woodwork. Though the chapel has expanded thanks to Ariandel, it's now turned into a den of madness, with fire and brimstone all around and Friede going all out. 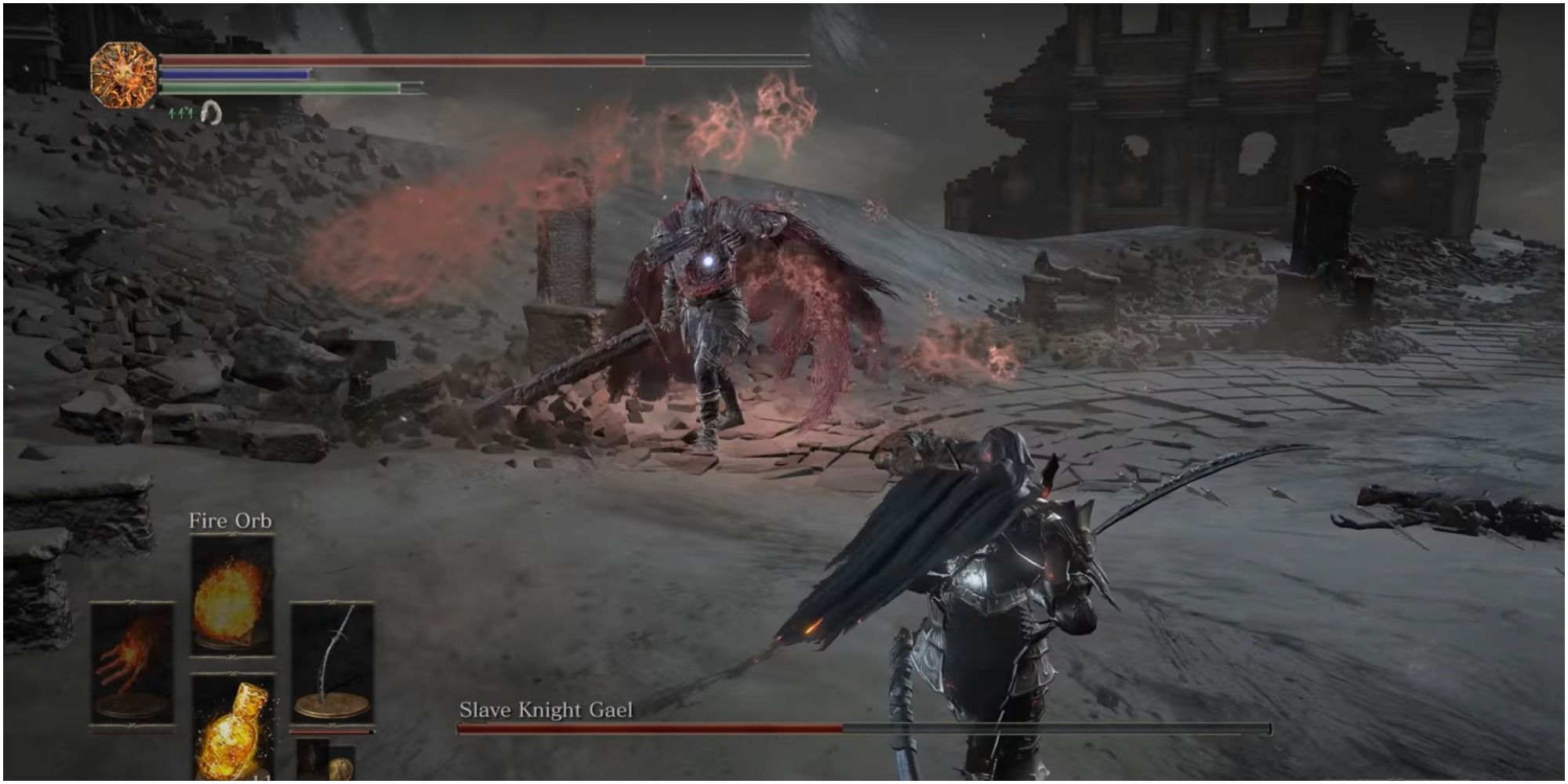 A larger-than-life boss arena for a boss that's out of this world, Slave Knight Gael's fighting ring deserves a spot on this list. The hardest boss in the DLC, Gael's arena has turned the sprawling Ringed City and beyond into a vast, ashen ruin.

Amidst this scene of desolation and death, Gael twirls about in a crimson fury, lightning striking down from the sky. The corpses of Pygmy Lords are scattered about their throne room, as The Ashen One and The Red-hood battle amongst ashen dunes, with the ruins of Lothric Castle in the distance. 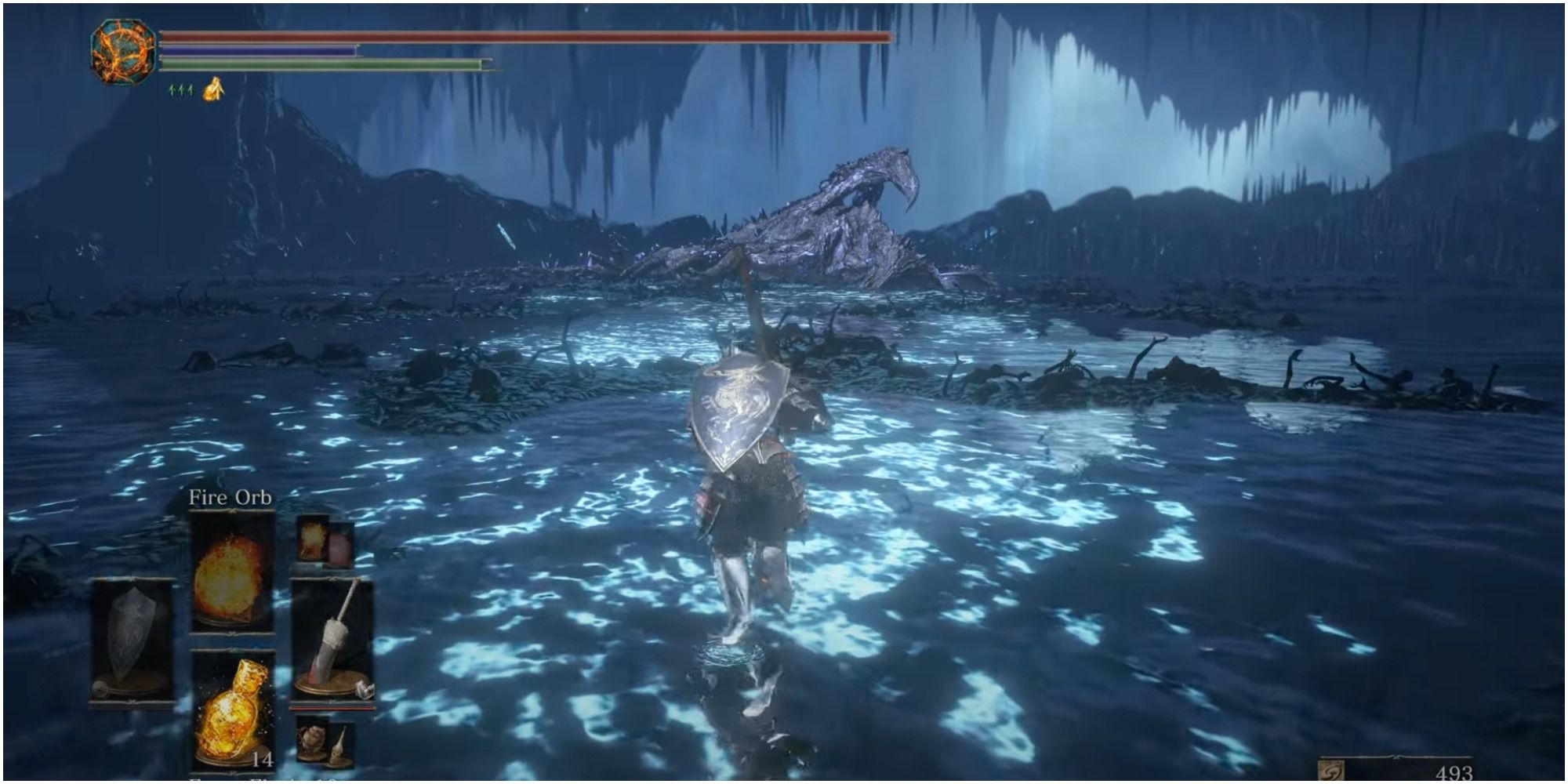 One of the best dragons in gaming, Darkeater Midir is a boss of epic proportions, and so is its arena. Getting to Midir's arena is pretty innocuous, which amounts to travelling down a well-hidden shaft.

Darkeater Midir makes its home in a massive, underground cavern, that, despite its vast size, Midir seems to take up the entirety of the place. In a pool riddled with the bodies of Midir's victims, you're definitely fighting tooth and nail not to be the next one.