From neon lit city streets to the dangerous badlands, Cyberpunk 2077 is a game packed full of secrets and interesting things to be found. As you progress through the story and slowly develop V into a bonafide legend, you will probably end up missing out on a lot of hidden details. Night City is a big place, and it’s easy for things to get lost in between the bullets, bad guys and braindances.

Whether it's a neat easter egg, or an obscure story moment, Night City is a world full of secrets begging to be found. It always pays to go off the beaten path and discover what is out there. 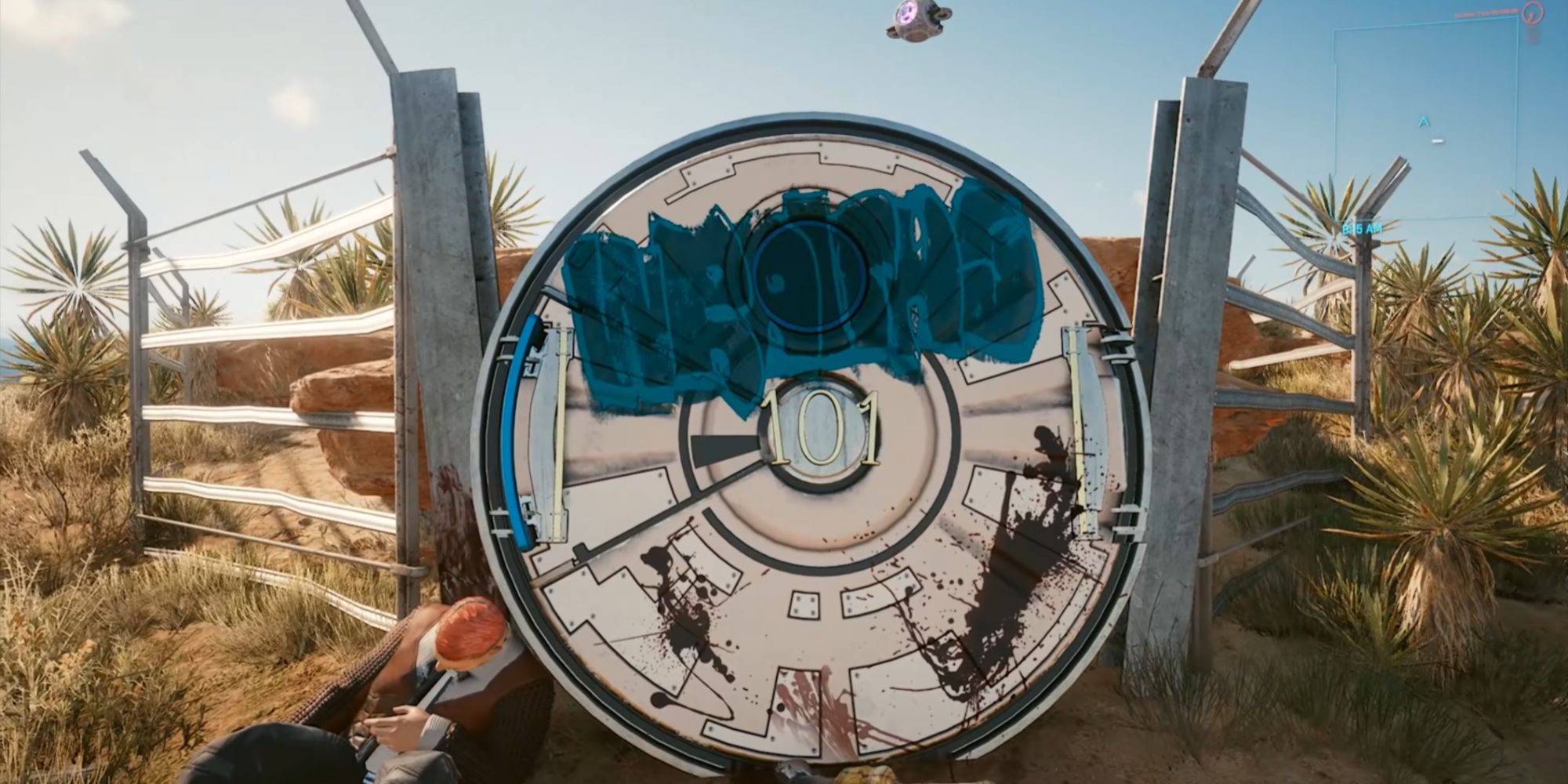 Vault 101 is one of the many post nuclear fallout shelters that play a prominent role in Fallout 3. While they appear to have benevolent purposes, the truth is that each vault was secretly built to perform a variety of morally questionable social experiments. These tests usually came at the cost of the inhabitants' lives or sanity. Night City has its own version of Vault 101, but it might not be what you expect.

To find it, head to the Border Checkpoint fast travel station, then travel east a short ways. You will come across a dead group of LARPers who wished to simulate a post-apocalyptic world. Next to them, you’ll find a makeshift vault door with the iconic 101 number welded onto the front. 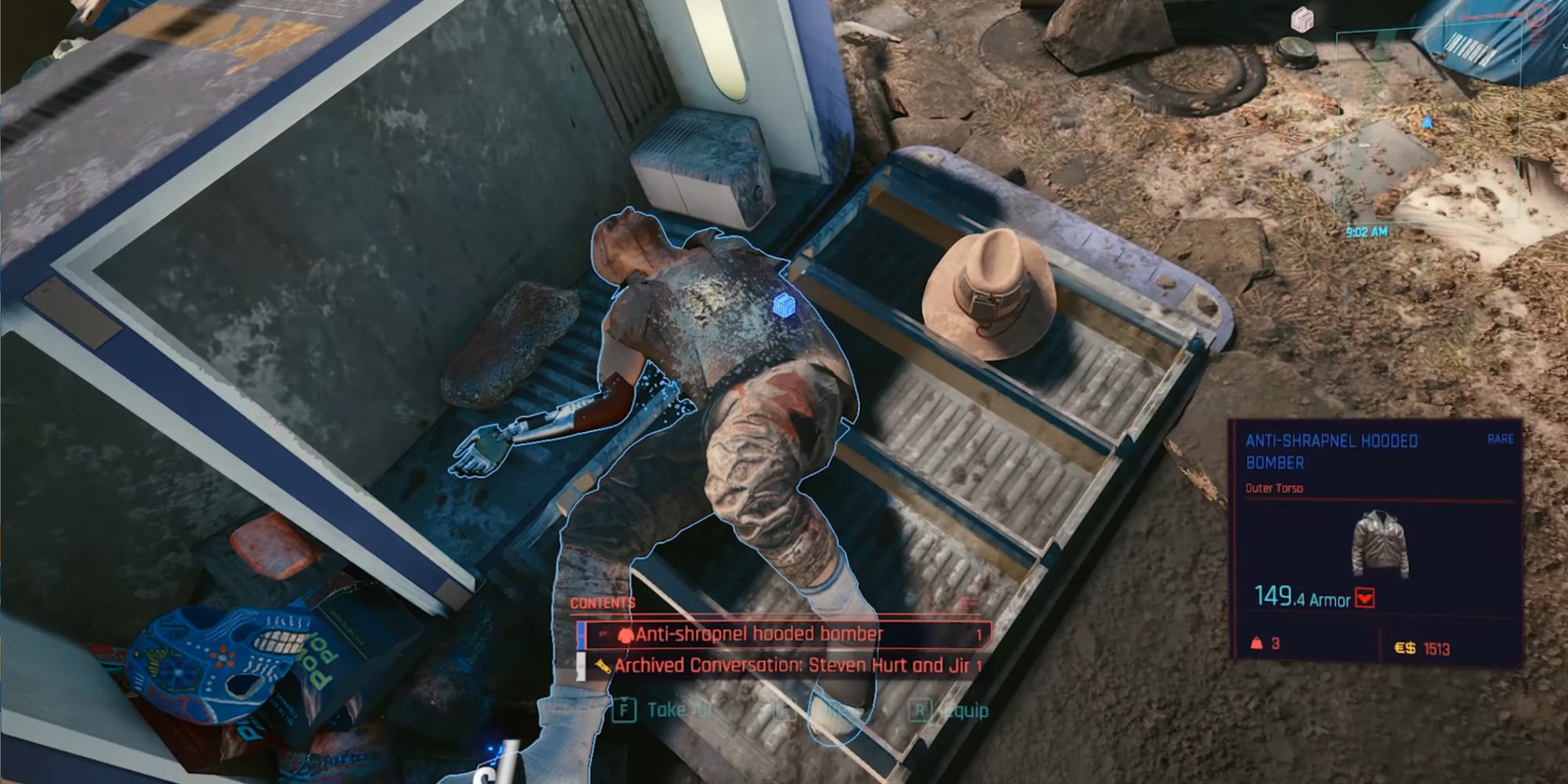 Indiana Jones is the quintessential adventurer of popular culture. He is a rugged archeologist, who comes complete with his reliable whip and a classic brown fedora. In the 2008 film, Indiana Jones and the Kingdom of the Crystal Skull, Indy has to hide inside of a fridge to shelter from an unexpected nuclear blast test. This scene has been faithfully recreated in Night City, although the poor soul inside wasn’t as lucky.

Head to the Medeski fuel station waypoint, then travel north towards a pile of debris. Inside the trash field, you will find an overturned fridge containing the dead body of one Steven Hurt. Next to his body will be the famous brown headwear worn by Indiana Jones. If you take the time to read the shard on Steven’s body, you will realize that his ill-fated fridge stunt is also a cleverly placed Mythbusters reference. 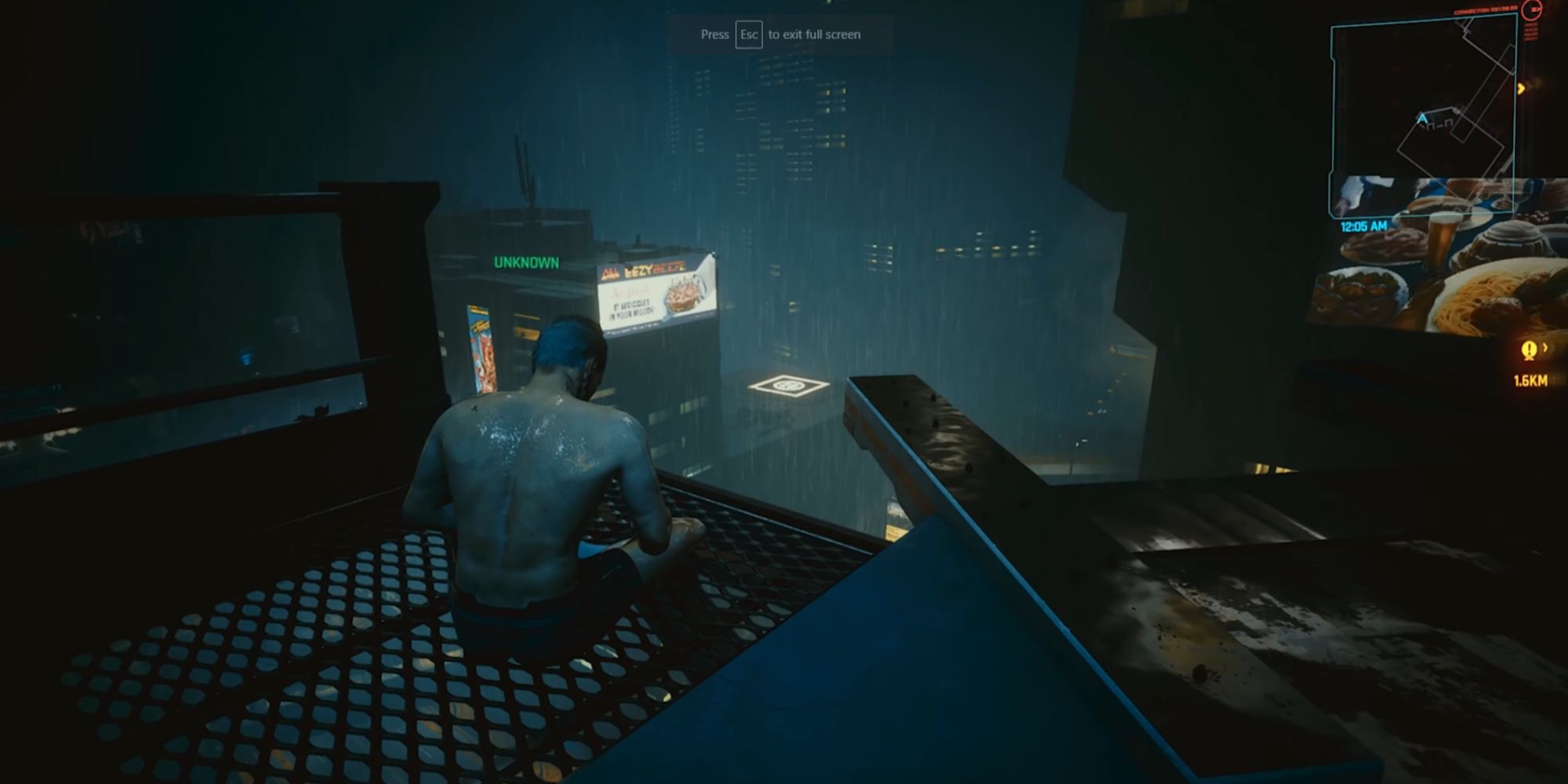 Bladerunner’s setting of future Los Angeles shares a lot in common with Night City. They are both dystopian futures that have been dominated by powerful corporations. Corporations whose schemes end up playing a large role in both of their stories. However, thanks to the inclusion of a neat Easter egg, that’s not where the similarities end. If you head to the top of the Advocet Hotel, you’ll find the body of Bladerunner’s Roy Batty, complete with a dark and rainy change of scenery. To find the hotel, travel to the Congress & MLK metro station in Vista Del Rey and walk slightly north.

This rooftop scene is a direct nod to Batty’s monologue at the end of Bladerunner. A nearby neon lit sign even reads “Like tears,” a subtle reference to the name of his speech, “Tears in rain.” 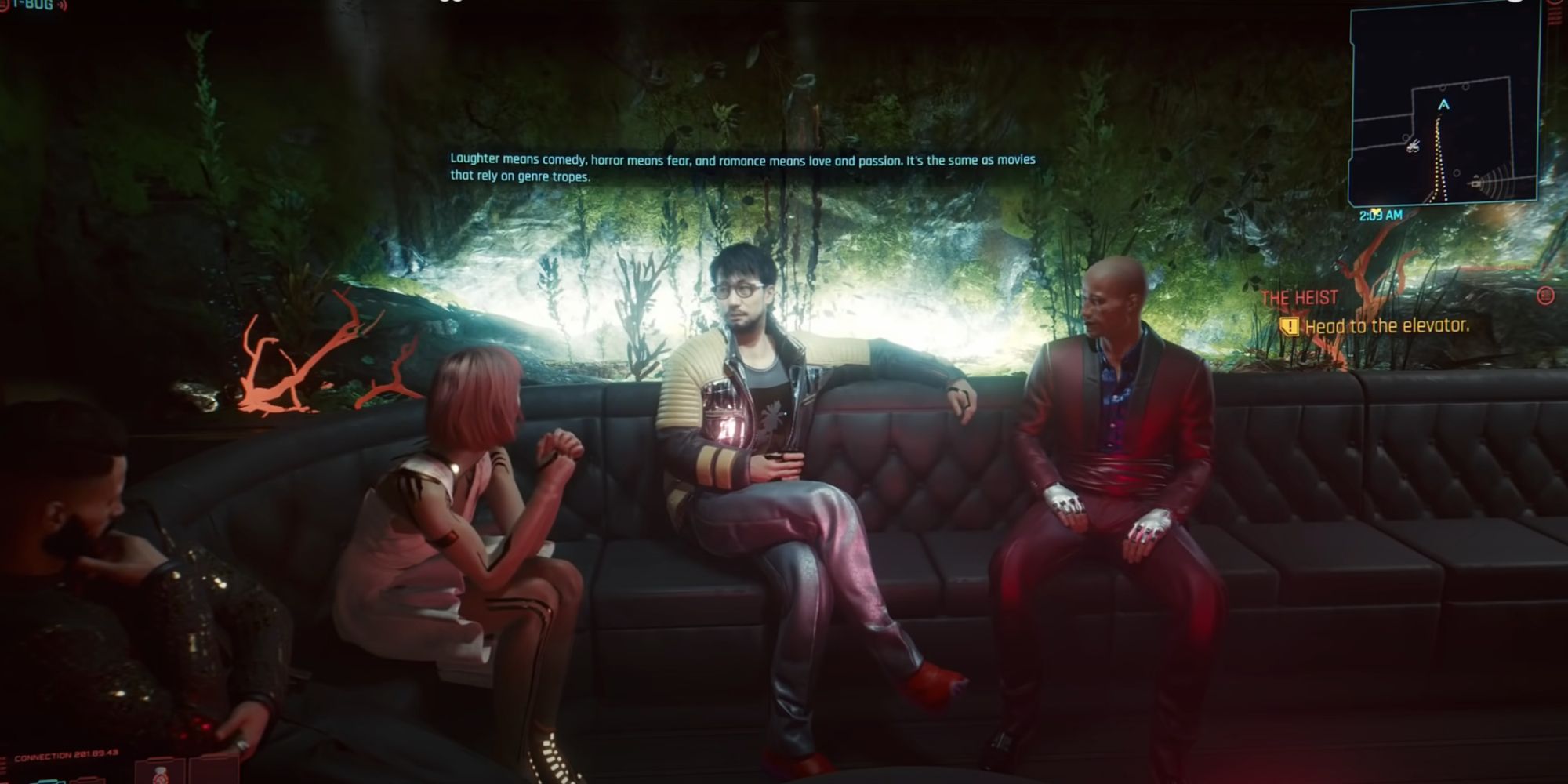 Hideo Kojima, the legendary video game director, known for creating the acclaimed Metal Gear Solid series and Death Stranding is also in the game. He is one of the most influential video game designers of all time, and has left a clear mark on the industry. Since his exit from Konami, Kojima has been free to pursue his wishes. Apparently, that includes taking a trip to Konpeki Plaza.

During The Heist mission, you are given the option to check out the bar before heading to your room. If you make your way over to the back table, you will be able to find Kojima himself, decked out in cyberpunk attire and chatting about the nuance of braindance narratives. 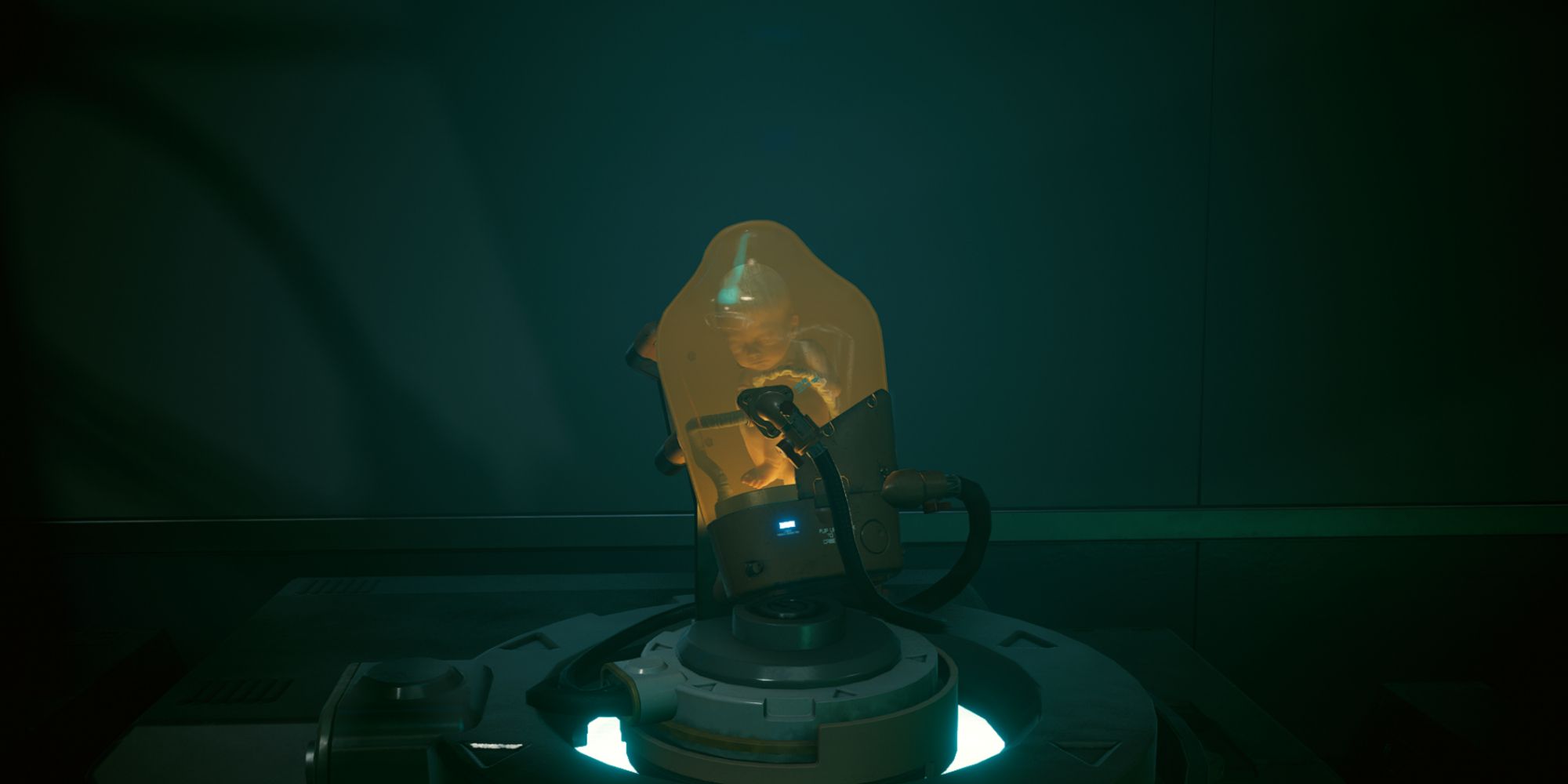 As a testament to Hideo Kojima’s influence on the industry, Cyberpunk 2077 features a reference to another one of his works, Death Stranding. During the River Song side quest The Hunt, you are tasked with finding a sadistic serial killer named Peter Pan. This investigation will have you breaking into a clinic to snatch a crucial braindance from a patient. However, if you stop to do some exploration, you will be able to find a container housing a complete BB unit. 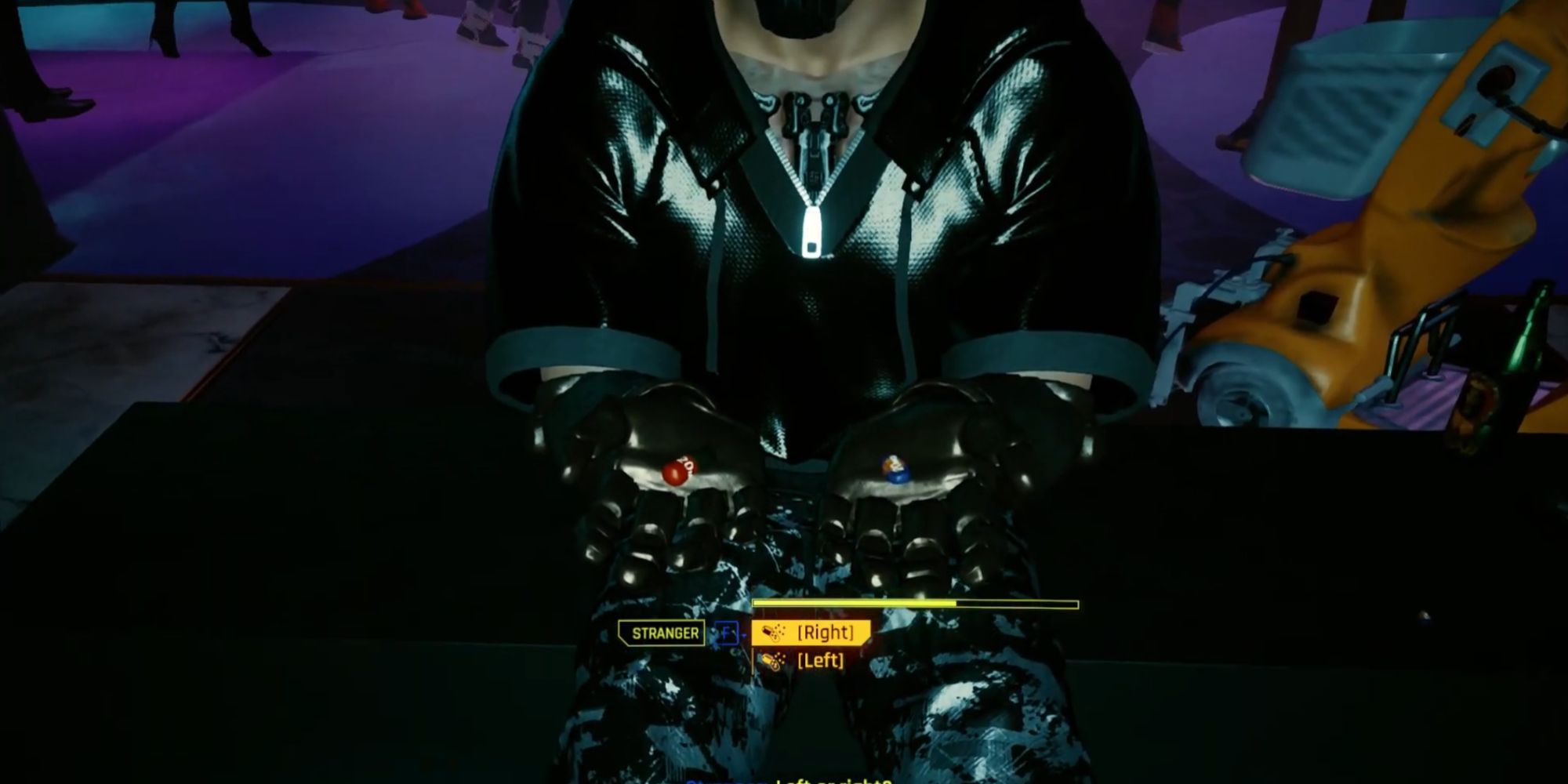 The original Matrix film was a pop culture phenomenon that posed a debate between peaceful subjugation and facing the hard truths of reality. This was characterized by Neo’s choice between two different mind-altering pills. Cyberpunk 2077 features its own reference to the iconic film. During the Chippin In side job, Johnny Silverhand will take control of your body for a few scenes.

During this sequence, a stranger in the club will give you a familiar choice between a red and blue pill. This plays out in much the same way as when Morpheus asks the question to Neo in The Matrix. What makes the scene even better, is the fact that Silverhand is also played by Keanu Reeves.

1/7 Jackie Beyond The Grave 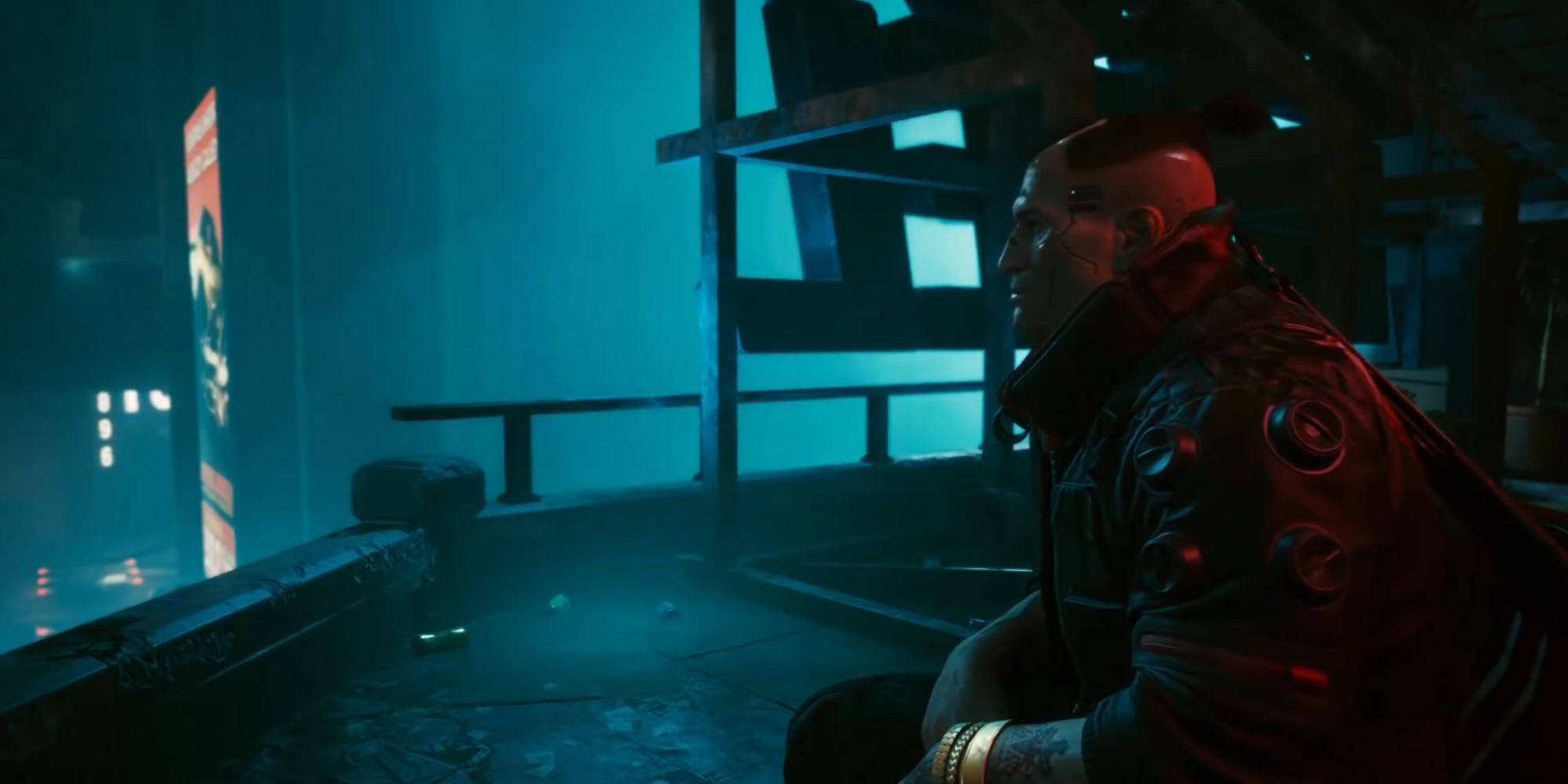 Jackie Welles serves as a loyal friend throughout your early hours in Night City. Sadly, due to an unexpected Corpo patricide, Jackie ends up bleeding to death during the closing moments of The Heist mission. However, if you make certain choices during the story, you can see him one last time. When asked by Delemaine how to proceed with Jackie's body, ask to have his body sent to Vik’s clinic. Later, during the final mission, make the choice to side with Hanako Arasaka.

With these choices made, the option to speak with an engram of Jackie appears during a conversation with Hanako in the final main quest. It may not be the happy reunion you hope for, but it sheds more light on the actions of Arasaka and the Soulkiller program.