You are here:
Home / Curse Of The Dead Gods Vs. Hades: Which Game Is Better?

Curse Of The Dead Gods Vs. Hades: Which Game Is Better?

The roguelike genre has made a major splash in gaming over the last few years. With many popular titles emerging on various platforms, comparisons would inevitably begin to surface, even as developers take measures to ensure their games feature unique mechanics and gameplay elements.

After the massive success of indie darling Hades, many games drew comparisons to the title, but none were so directly associated with it as Curse of the Dead Gods. While the two games have their fair share of differences, there are a host of valid reasons why the two games are often associated with one another. Here are a few similarities that they share. 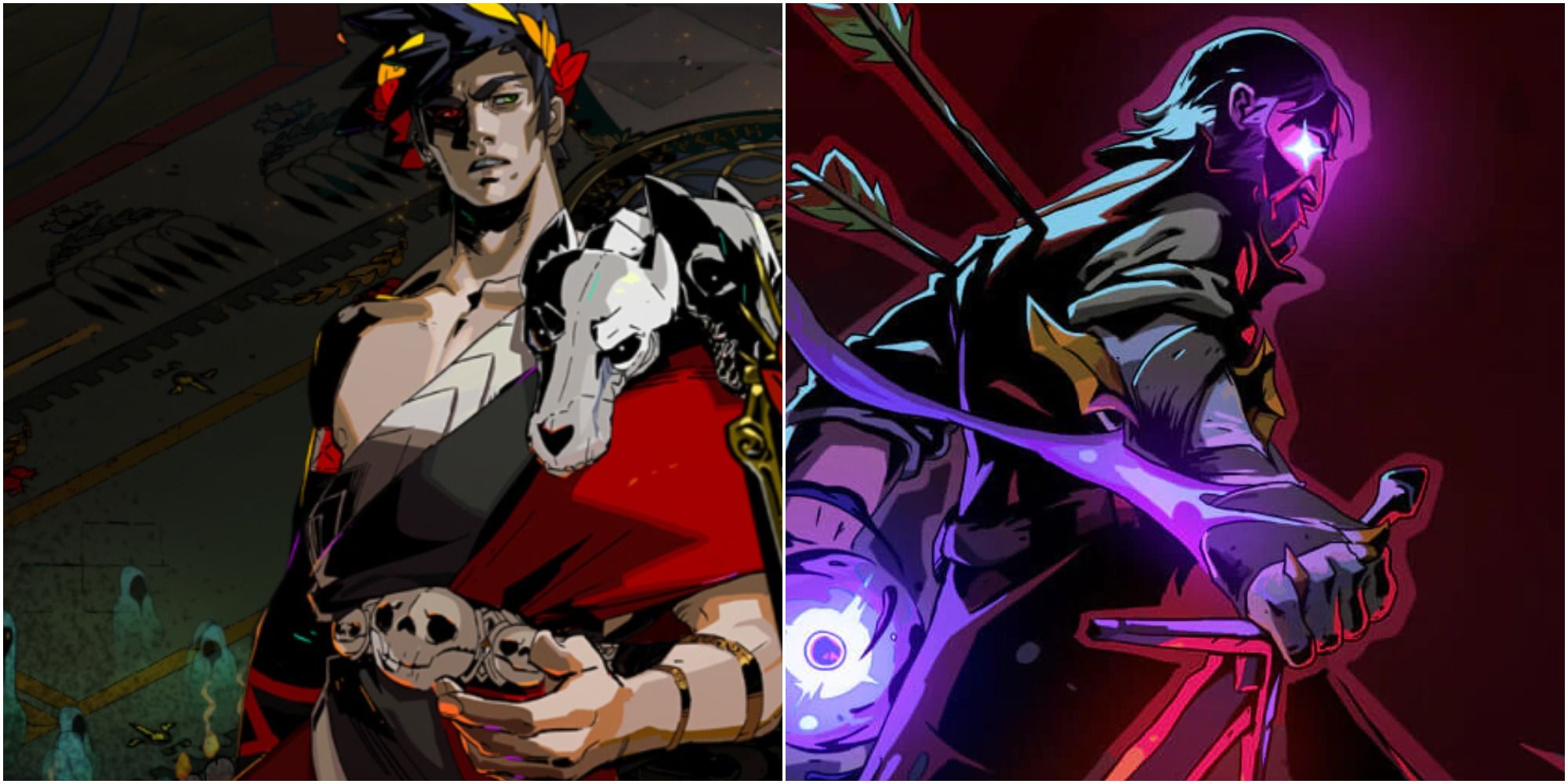 The most apparent similarity between the two games is undoubtedly their similar art direction. A major reason Hades made such massive waves in the world of gaming upon its release is its striking art style, with vibrant locations littered throughout the game's depiction of the Underworld and beautifully rendered characters that ooze personality. The game's hand-drawn environments, in particular, are a true sight to behold.

Curse of the Dead Gods may have taken a darker approach to its visual identity, but the similarities remain. The artwork has a cel-shaded look that gives it a similar feel to Hades, and its environments have a familiar design, invoking the same ancient and otherworldly feeling. While neither is an exact duplicate of the other, both games share the same visual strengths. 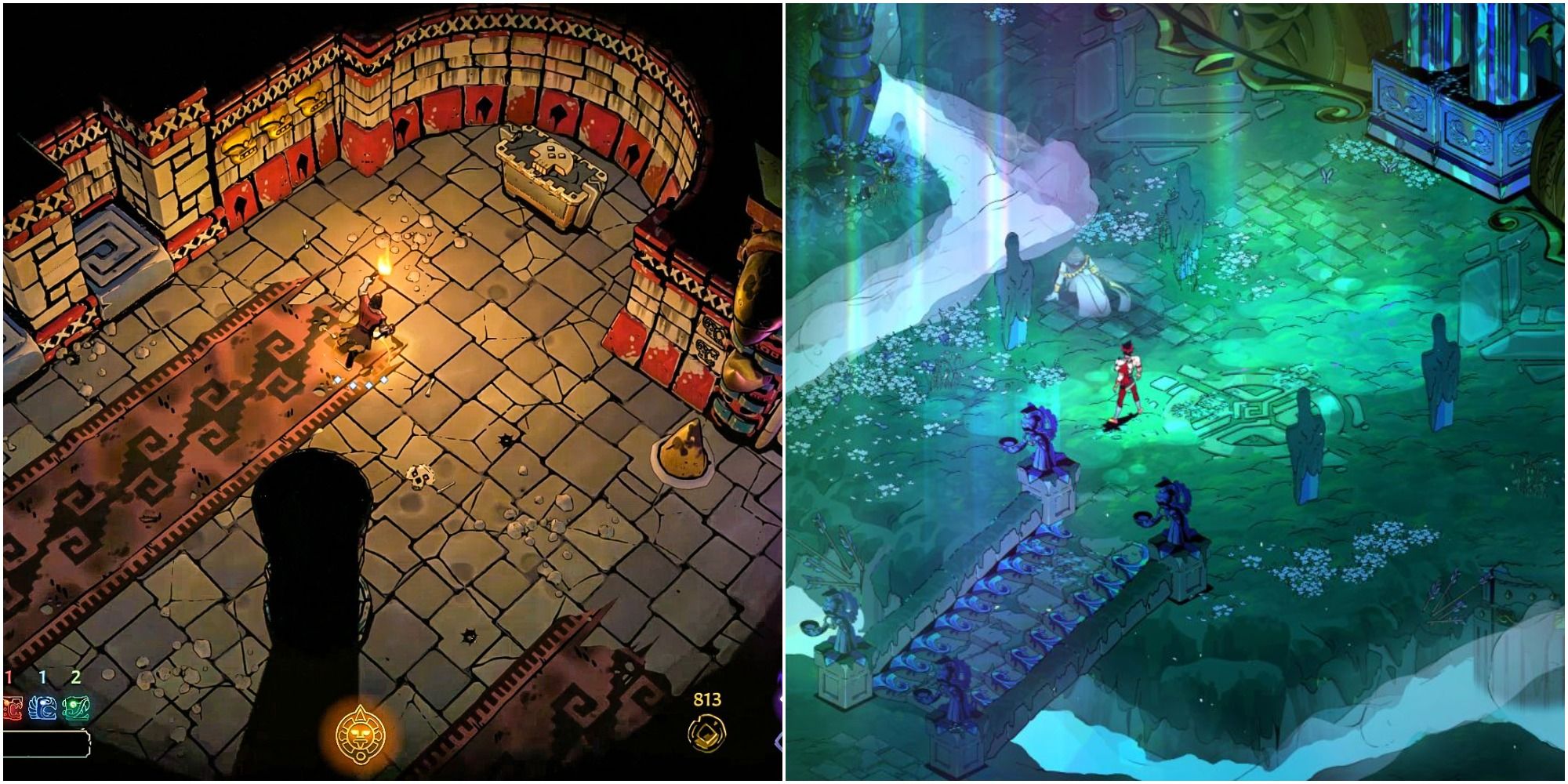 One explanation for the similar look and feel of the games lies in the isometric viewpoint from which they're both played. The top-down perspective of each game gives Curse of the Dead Gods an aesthetic that feels familiar to anyone who's played Hades.

Many of the unique aspects of each game's look can be effectively disregarded when viewing both from the same angle. 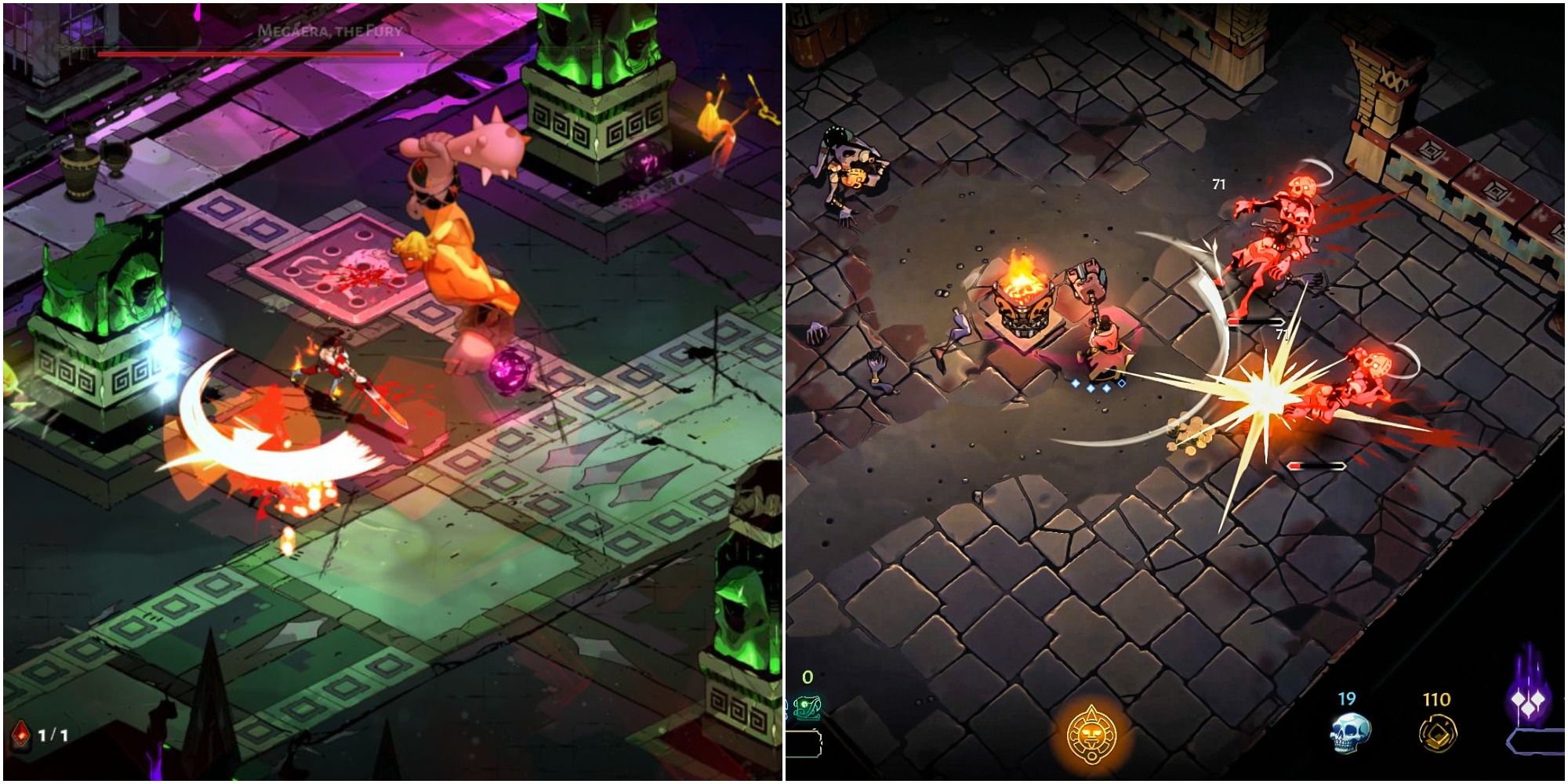 Hades' pick-up-and-play nature leads to many hours' worth of fun for players, which can be attributed to its combat. With a variety of weapons and an emphasis on evasion, the fast-paced game can be difficult to put down. You'll spend your time dashing around enemies, cycling through your otherworldly weapons, and utilizing the abilities of the gods to tear apart your foes.

Many of the same compliments granted to Hades can be given to Curse of the Dead Gods' combat. An array of weapons that you'll eventually be able to choose from at the start of your adventure add to the game's replay value, and although the game differs from Hades in the fact that it has a stamina system in place, rolling and evading attacks is still the key to victory. 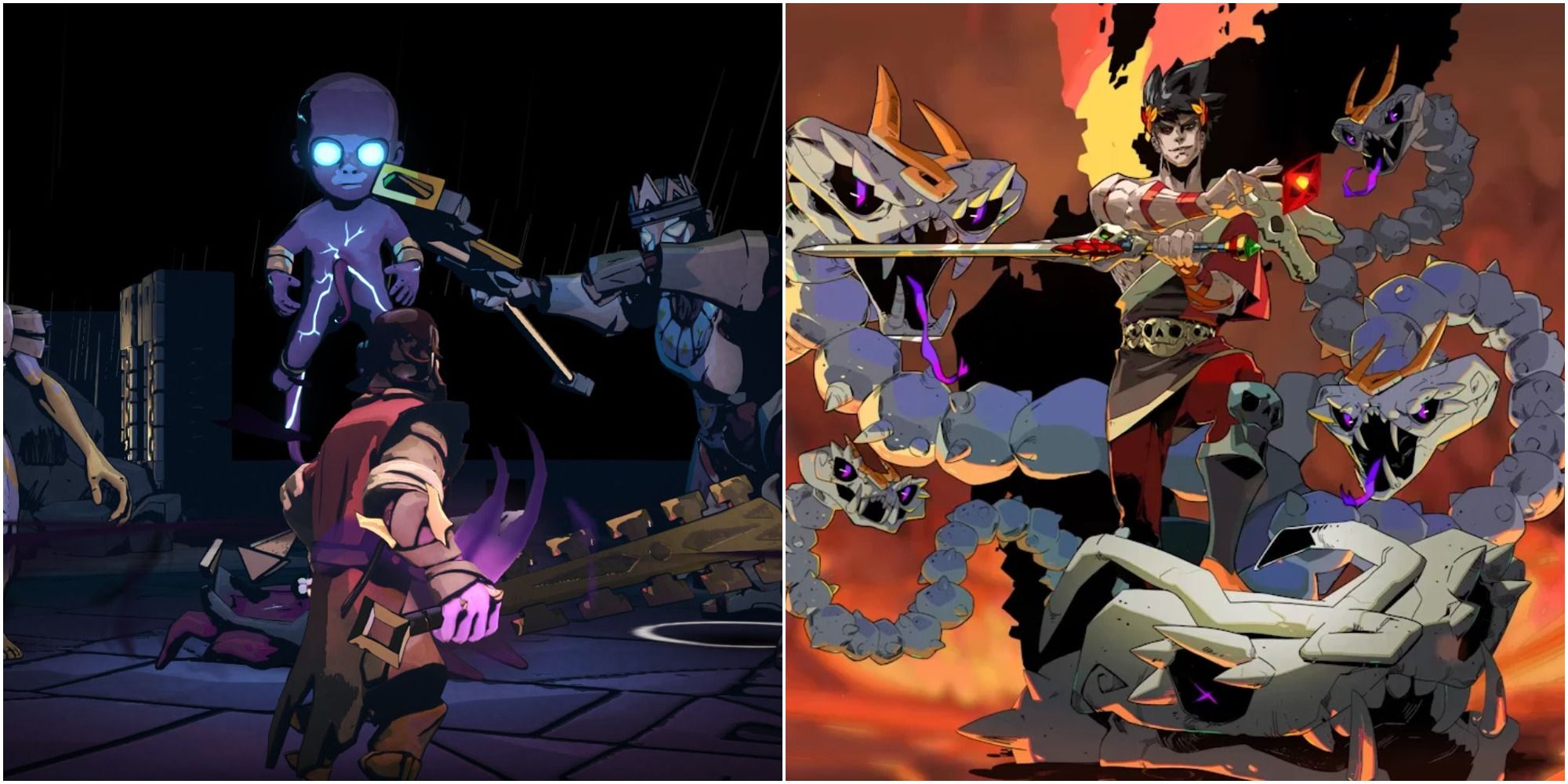 In both Curse of the Dead Gods and Hades, you'll encounter a variety of beasts, all of whom will evoke creatures of lore and legend.

You'll encounter flying Harpy-like beasts, cursed archers, ungodly warriors, and more in both games – albeit with somewhat different designs across the two titles. 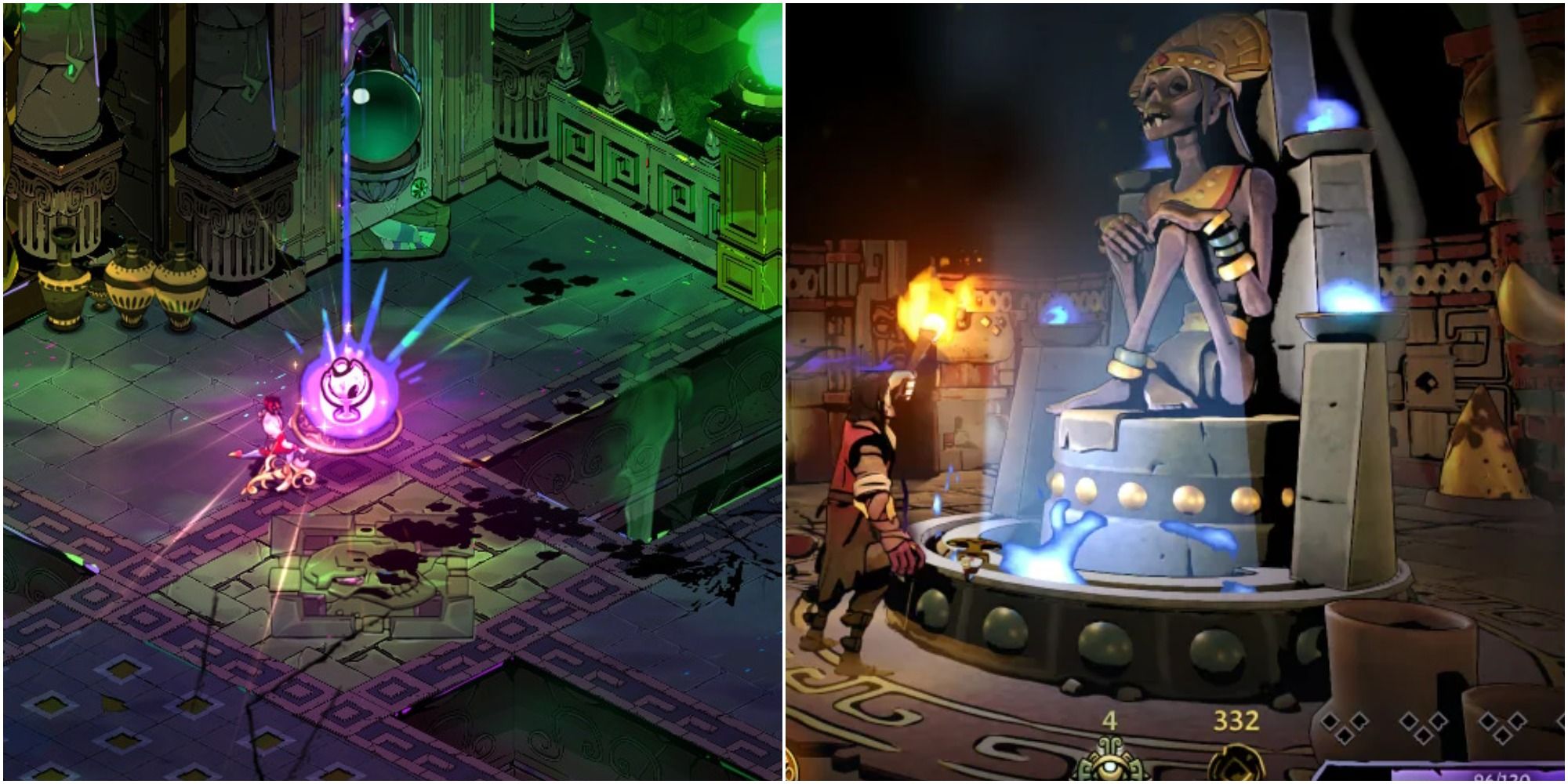 Curse of the Dead Gods features a number of gameplay elements designed to make your runs more challenging, but there are also perks granted to you by the gods that actually help you to perform more effectively. As you progress, you're rewarded for your combat victories and exploration with relics, and each of these grants you a passive buff that improves your performance throughout your run.

This system is easily comparable to the boons found in Hades. Certain rooms in Hades will be adorned by a symbol representing one of the many Greek gods found in the game. Clearing these rooms will reward you with boons that improve your combat prowess, maneuverability, or item discovery in some way. 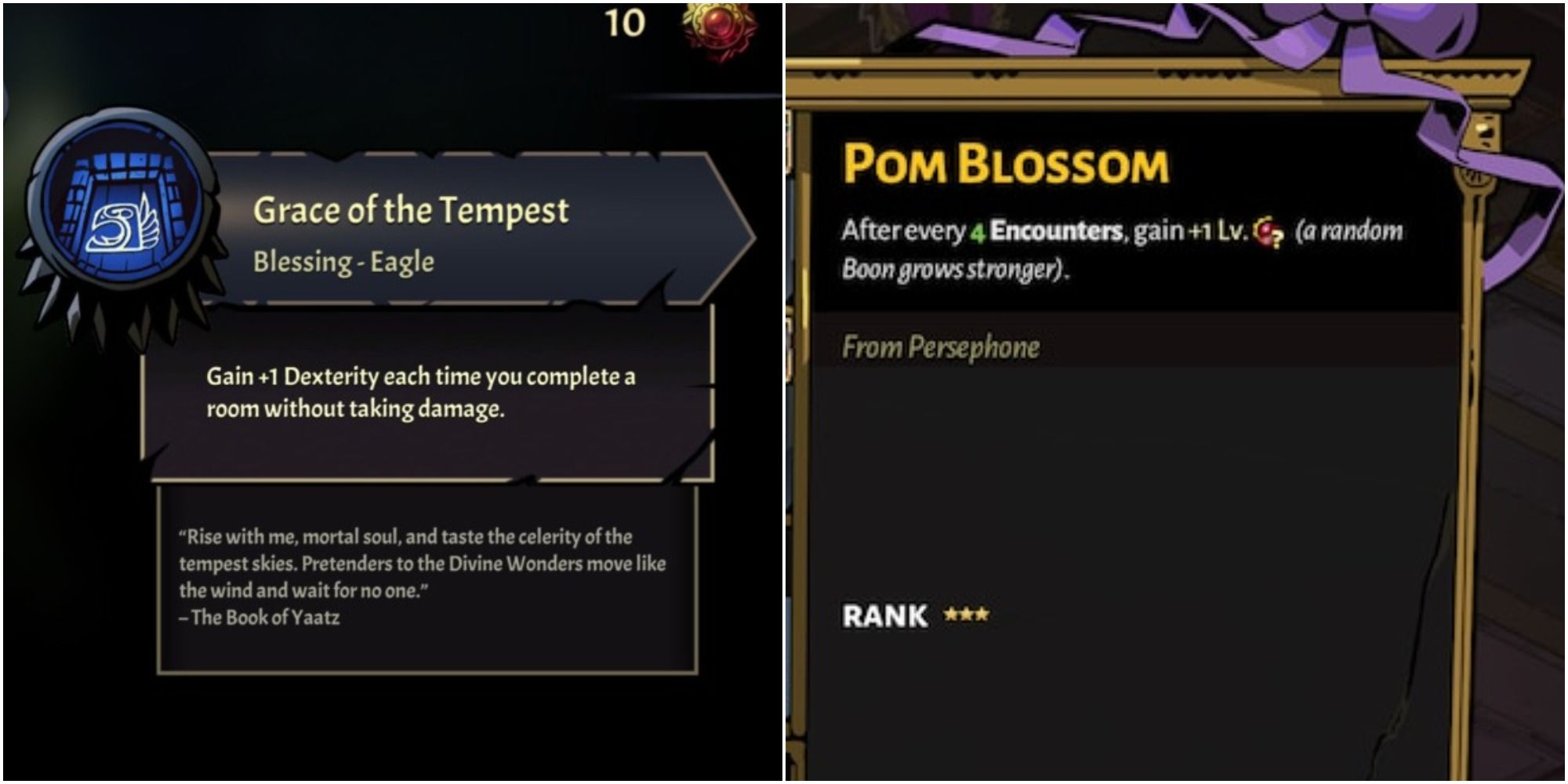 In addition to boons and relics, each of these two games allows you to begin your run by equipping certain items that will aid you throughout your next attempt. In Hades, these items are Keepsakes, granted to you by your friends, family, and the gods themselves.

Curse of the Dead Gods refers to its similar items as Blessings, with each category coming from one of three gods – you'll be able to choose from T'amok's Blessings, Yaatz's Blessings, or Sicha'l's Blessings at the beginning of your run. 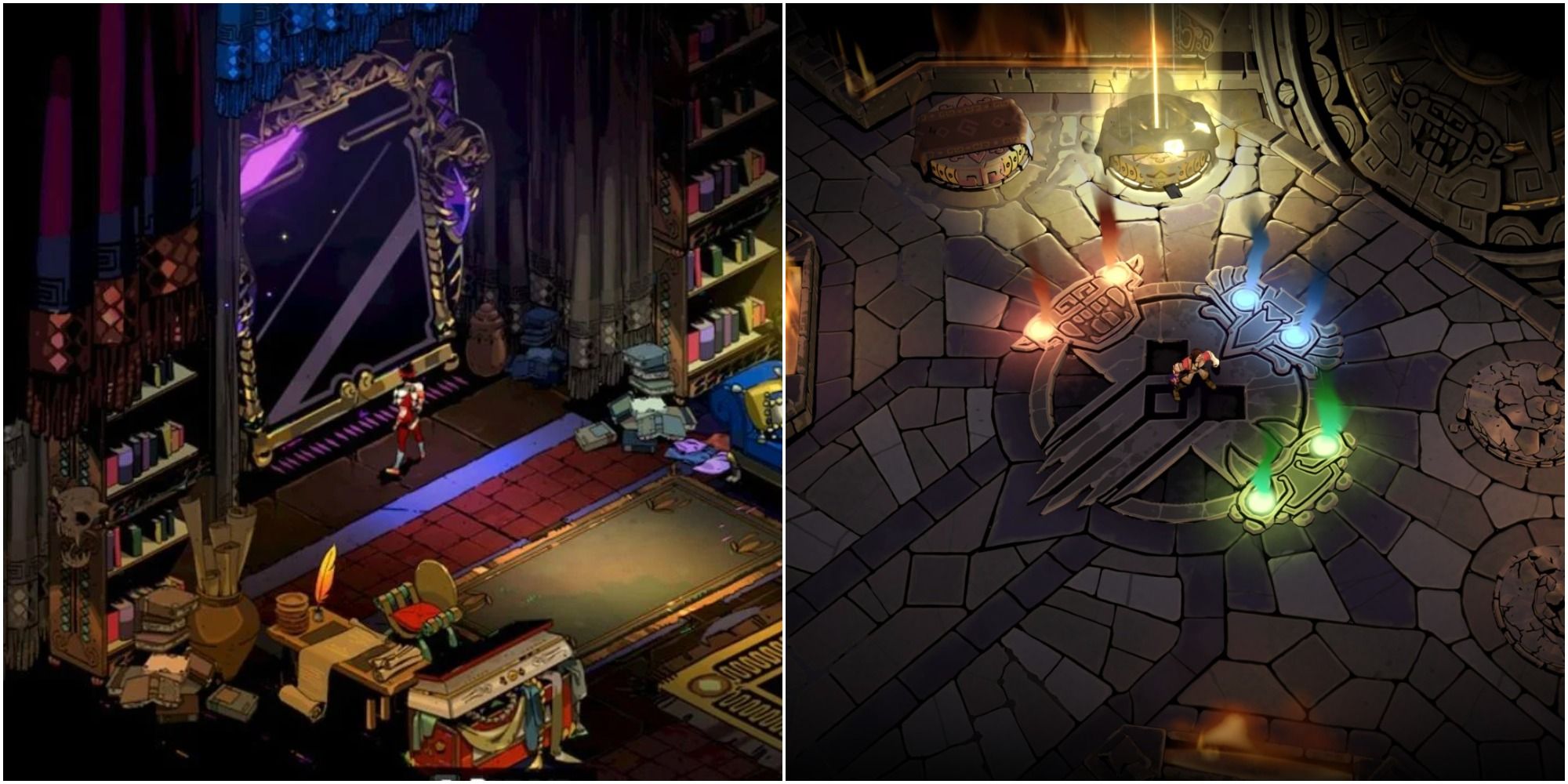 As you progress through Hades, you'll begin to accrue different forms of loot, some of which will serve mainly as currency for permanent upgrades. Darkness is a collectible item in the game that, when taken to your large bedroom mirror, allows you to boost your passive skills and perks, with some even granting you new or enhanced abilities such as more dashes to avoid attacks. Alternatively, you'll also begin to collect Titan Blood, which, among other things, will allow you to upgrade the powerful weapons in your arsenal.

Curse of the Dead Gods has both of these aspects covered as well. In the hub world, you'll find a platform that allows you to open your upgrade menu, where you can spend certain items in your inventory to permanently boost your skills. There are the Crystal Skulls, which can be exchanged for passive abilities, such as reduced damage when your character stands in the light. Alternatively, the Jade Rings you collect will allow you to upgrade your weapons, helping you to stand a much better chance as you traverse the cursed temple you inhabit.