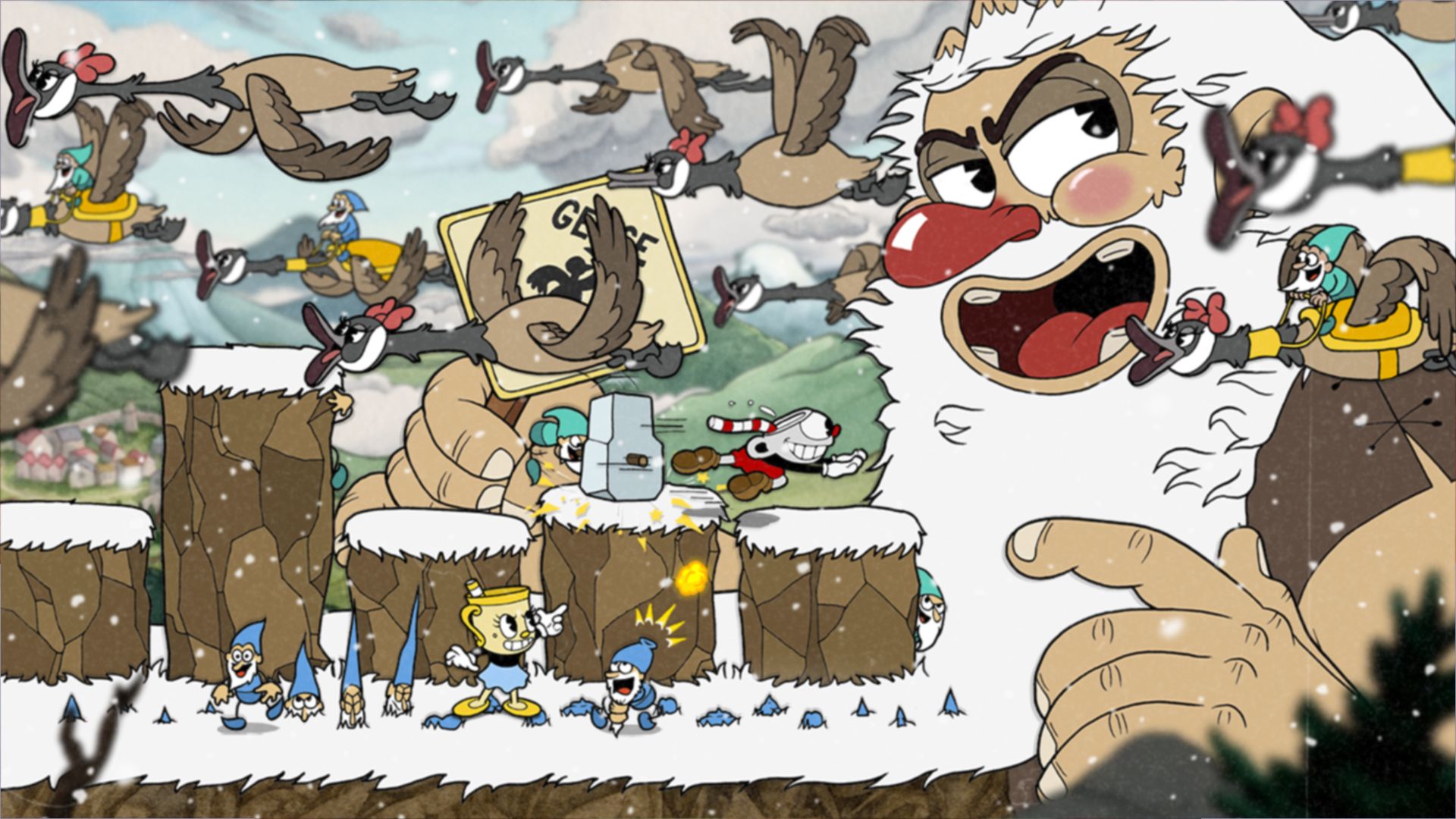 After years of waiting the DLC for Cuphead is finally here, with more rock hard enemy bosses and 1930s style cartoon surrealism.

Now that Elden Ring has proven such a massive hit, it’s going to be interesting to see whether other publishers and developers consider the debate over unusually difficult games to be over. Predecessor Dark Souls started the argument and encouraged many games, both those similar in style and otherwise unrelated, to dare to be difficult. It was into this climate that Cuphead was released in 2017 and became another unexpected success, and now it’s finally got its long promised DLC.

Apart from being really, really hard, Cuphead has no other similarities to Dark Souls, since it’s a 2D platform shooter inspired by old school arcade games like Contra and Metal Slug. That’s unusual enough in this day and age but it’s presented in the style of a 1930s cartoon, complete with ‘rubber hose’ style animation and creepy looking character designs.

The end result is one of the most visually impressive games of all time, even though it was developer Studio MDHR’s first game and the two brothers in charge had no previous experience with animation. Despite the very specific inspirations behind the artwork, and the extreme difficulty of the action, Cuphead proved a huge success and now, finally, its DLC is out.

Although it’s not very important to proceedings, Cuphead does have a story. In fact, it also has a Netflix animated show that, inevitably, has far less distinctive animation than the actual game. In the original release, Cuphead and Mugman were attempting to stop the devil from claiming their souls, after an incautious incident at a rigged casino, and the DLC takes place directly after those events.

The plot of the DLC centres around Ms. Chalice, who is stuck on the astral plane as a ghost and can only permanently be brought back, by one Chef Saltbaker, if all the ingredients for a ‘Wondertart’ are obtained from the new island map that the expansion takes place on.

As before, the game is essentially a giant boss rush mode, where you take on a series of, primarily single-screen, bosses with only a few distractions in-between. Unlike the original there are no run ‘n’ gun levels and only one of the bosses is a side-scrolling shooter. In fact, there’s only six main boss battles, so if you’re the sort of person that beats Ikaruga on one credit, or plays Dark Souls with a blindfold, it can all be beaten in less than an hour; even if it will take mere mortals 10 times that.

There’s no question of why the DLC took so long (even ignoring the pandemic) as that’s made evident at every moment through the incredible visuals. The animation is notably more ambitious this time round and quite breathing taking at times, as screen-sized bosses gurn and contort in front of you, like nothing else you’ve ever seen in a video game. We also noticed a few instances where real world models were used, instead of just painted animation, which may offer a hint as to Studio MDHR’s future plans.

The final boss is especially impressive, as you’d expect, but the airplane level is also amazing, as you’re pursued through the air and have to fight upside down and on the side of the screen, like something out of a Treasure game. The Bootlegger Boogie level, that features multiple different enemies and ends with a giant anteater taking up the whole screen, is another highlight but, really, there’s not a dud amongst them.

Cuphead and Mugman play the same, but one of the DLC’s most important new features is the chance to play as Ms. Chalice, who can not only double jump but has an invincible roll and a dash parry move. She also has slightly more health, and different super moves, but her main benefit is how mobile she is, making the original duo seeming clunky and inflexible by comparison.

Ms. Chalice can also be used in the original levels, which greatly helps with some of them, but apart from a handful of new weapons and charms the only other new content is a hidden bonus stage and The King’s Leap: a series of five chess-themed battles where you can’t shoot and have to rely on the game’s parry mechanic that only works with pink-coloured objects.

It’s very clever, especially the volleyball like one against the Rook, and the finale with the Queen, but it’s less of a palate cleanser than the run ‘n’ gun levels – even if they were amongst the most frustrating parts of the original.

At the time of our original review, we felt the difficulty was just a little too perverse, given that, unlike Elden Ring, there’s no way you can ameliorate it by gaining extra abilities or levelling up. There are additional weapons but they’re something you have to buy with coins that are usually very difficult to obtain. There’s also a co-op mode but unless you’re playing with an expert, we’ve always found the other player more of a distraction than a help.

The original’s success suggests this hasn’t been a problem for most people, but we’ll still say we find the wimpish bullet sound effects disappointing, as well as the lack of feedback when you hit something. So much so that you can get the impression you’re just playing on top of the game, rather than being an intrinsic part of it, like some old 90s FMV title.

There are some nit-picks to take with Cuphead even if you’re okay with the difficulty level but the only unique issue with the DLC is its relative shortness. Existing fans shouldn’t even consider hesitating though and as long as you know what you’re getting yourself in for, newcomers should absolutely consider diving in. There really is nothing like Cuphead and its DLC is even more outrageous and imaginative than the main game.

In Short: It’s relatively short but Cuphead’s long-awaited DLC does not disappoint, with some incredibly well orchestrated boss battles that look more amazing than ever.

Pros: The game’s visuals are incredible, with gorgeous 2D animation that’s notably more dynamic and ambitious than the original. Fantastic presentation all round and Ms. Chalice is very useful.

Cons: Quite short, with only six main boss battles. The original flaws of the parent game remain, with a lack of feedback and a punishingly hard difficulty level.