You are here:
Home / Cuphead: The Delicious Last Course – How To Defeat The Angel And Devil Secret Boss

Cuphead: The Delicious Last Course – How To Defeat The Angel And Devil Secret Boss

Cuphead: The Delicious Last Course isn't content simply providing you with a whole host of new bosses, weapons, and charms. No, they made sure to include a secret boss and tether them to a unique charm. And, in typical Cuphead fashion, none of it is a walk in the park. Intriguing, no?

But how do you unlock them? And when you do, how do you defeat this difficult duo? And hey, what is your reward for accomplishing all of it? Well, this guide will succinctly answer any, and all, of your hidden boss and secret charm questions. Just consult the Table of Contents below!

How To Unlock The Angel And Devil Secret Boss 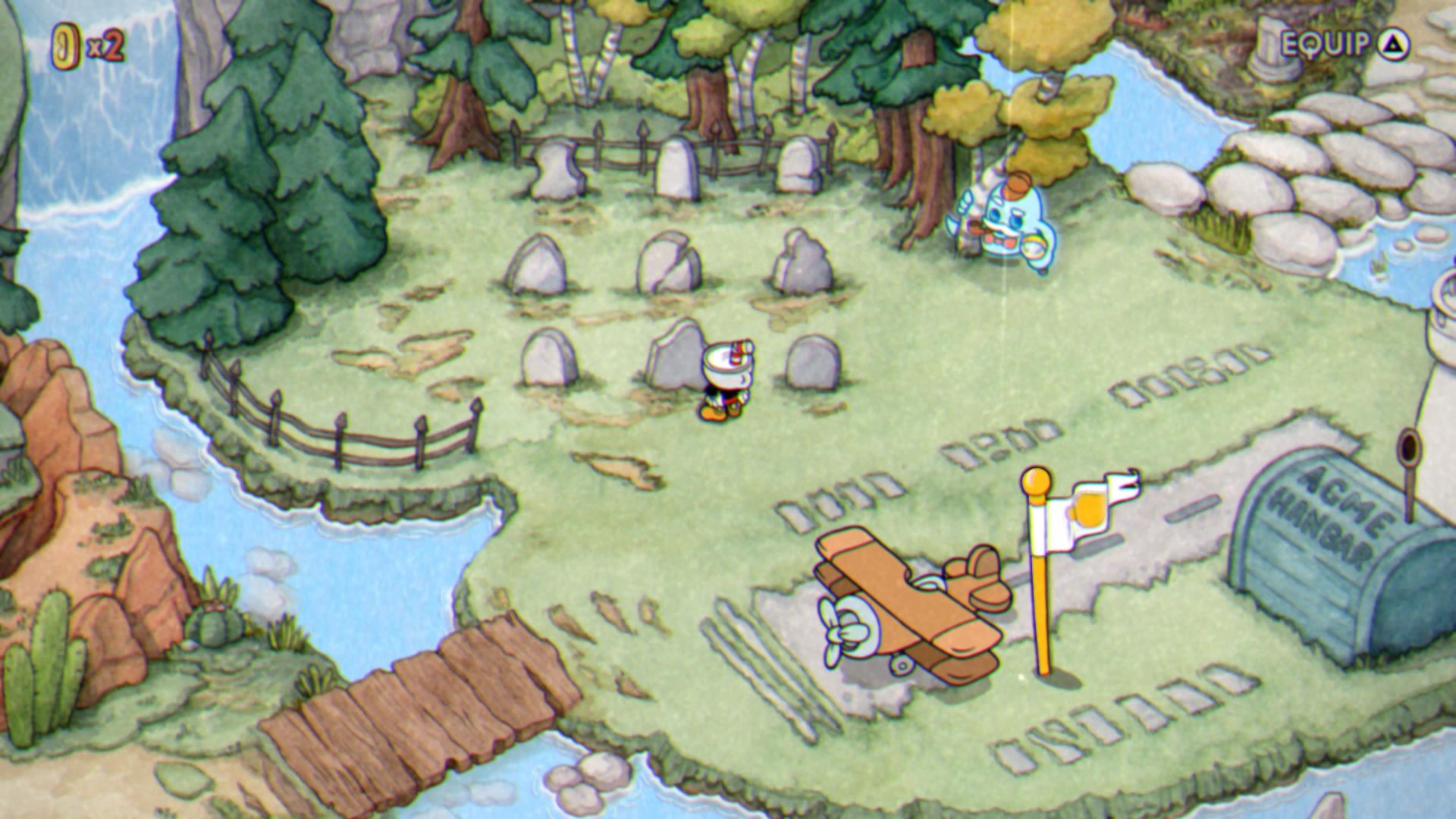 This puzzle is easy as pie to unlock. First thing's first, you need to buy the Broken Relic from Porkrind's shop (it costs a single coin). Now, you simply need to interact with three of the tombstones in the correct order. Unfortunately, we cannot give you the code, as it is seemingly randomized.

However, we can tell you how to get the code. Approach the three characters on the podiums to the north of the graveyard. When you talk to them, they will all have directions hidden inside their dialogue. So, the only thing you need to do is to match those directions with their place on the podium. 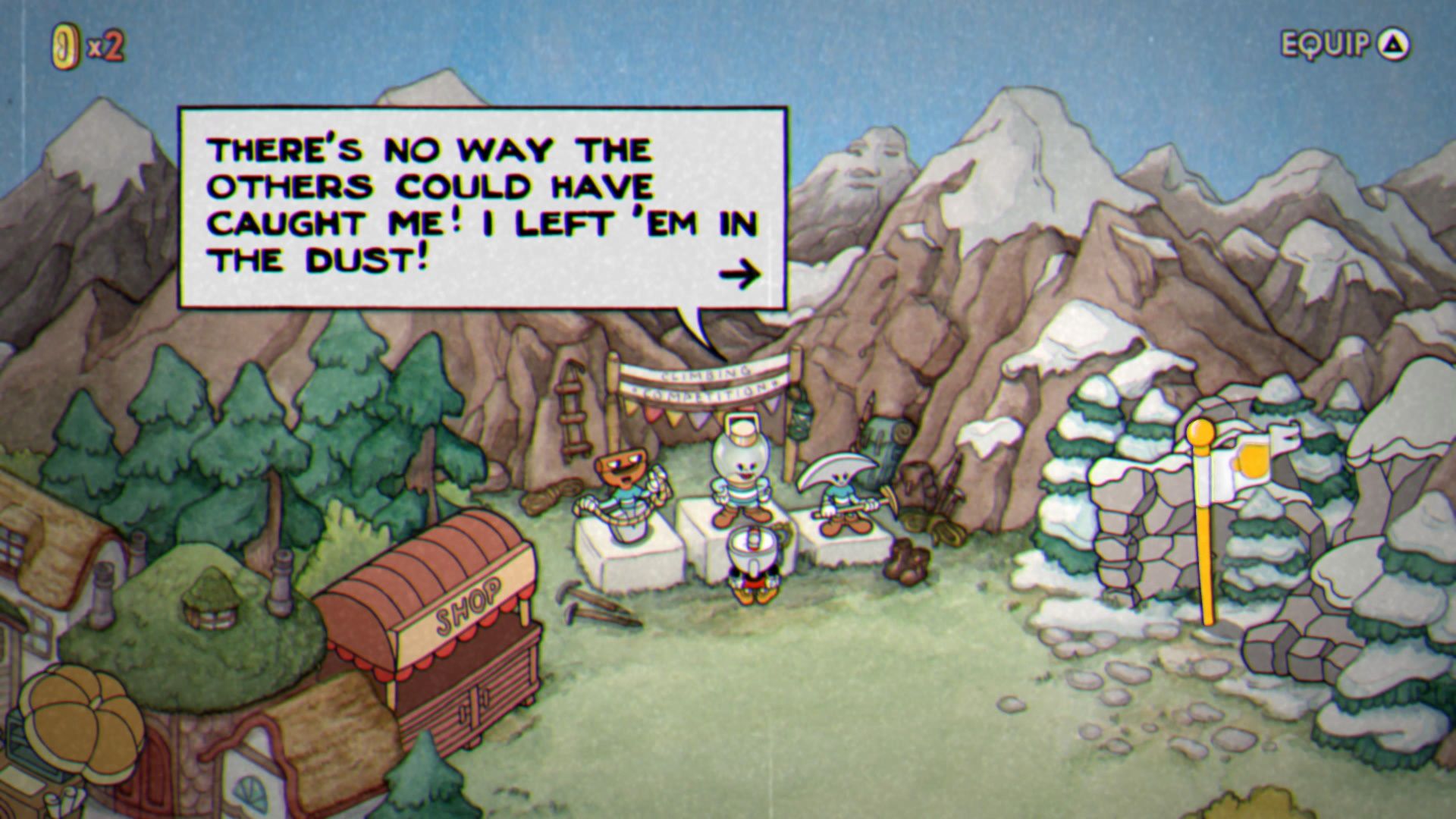 As an example, if the first place winner says that he "Left 'em in the dust". That translates to the first tombstone you interact with being the center-left tombstone. Maybe the racer who finished second will mention that they are "an upright citizen", which would mean that the second tombstone you would interact with would be the top-right tombstone. You get the idea. Once again, these are only examples; your solution will be different.

This one is cut and dry. You will want to have the Chaser as your primary weapon. This way you can worry about dodging projectiles and not about hitting your target. You will want the Smoke Bomb as your charm. As having the Smoke Bomb equipped will allow you to dash through the pillars of fire. As for your super, you are going to want to use Super 1. The beam super will almost certainly end the battle the second you are able to pop it and will hit from the other side of the screen. Related:Cuphead: The Delicious Last Course – How To Defeat Esther Winchester

How To Defeat The Angel And Devil Secret Boss 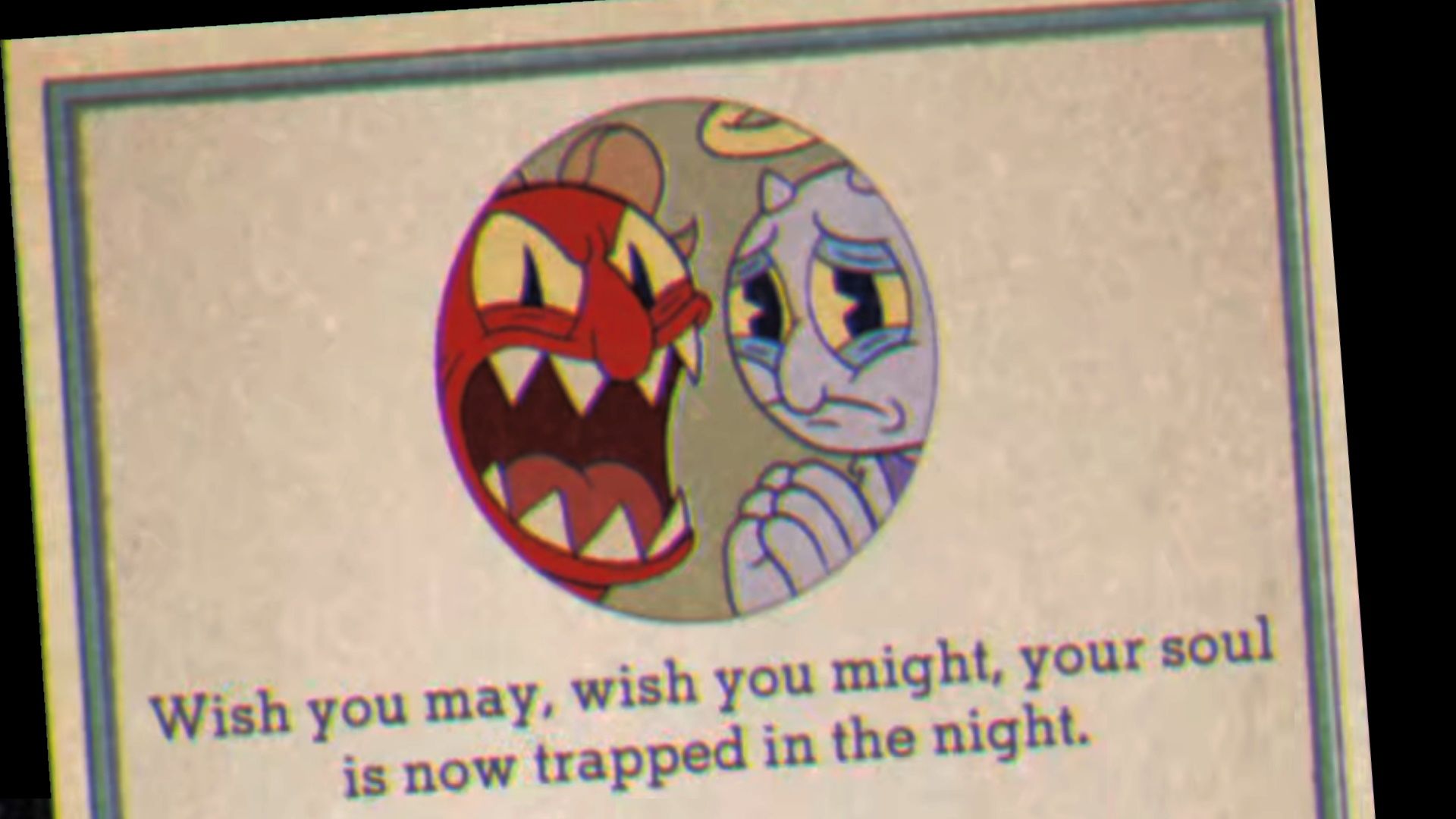 The boss battle itself is extraordinarily unique. It is all one phase, so what you see is what you get. It also has an Ikaruga-esque element to it. You will always face the devil, and the devil is the only one who will deal damage. The angel is always facing your back, and everything the angel does is utterly benign. So, any time you turn, you will instantly swap the devil and angel. This is pretty brutal, as a lot of dodging tends to feature shifting left and right so that you can get an ideal angle. 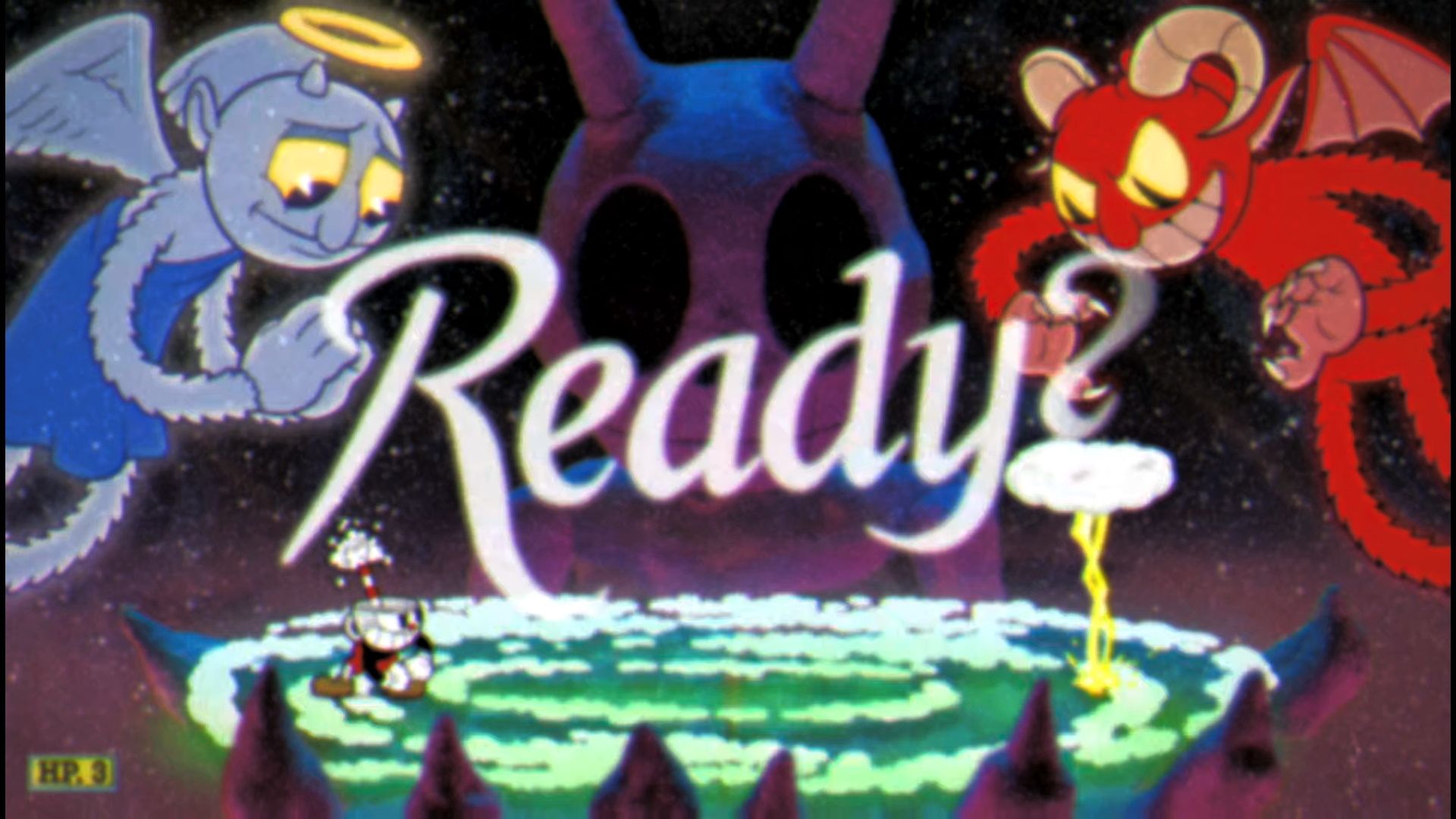 However, if you try to do that here, just as you adjust left there is a good chance you will walk straight into a projectile; a projectile that had previously been harmless (but now very much causes harm). There is also a storm cloud that travels across the screen which you need to hop on top of, or you will take damage as it passes over you. It is a lot to keep track of. 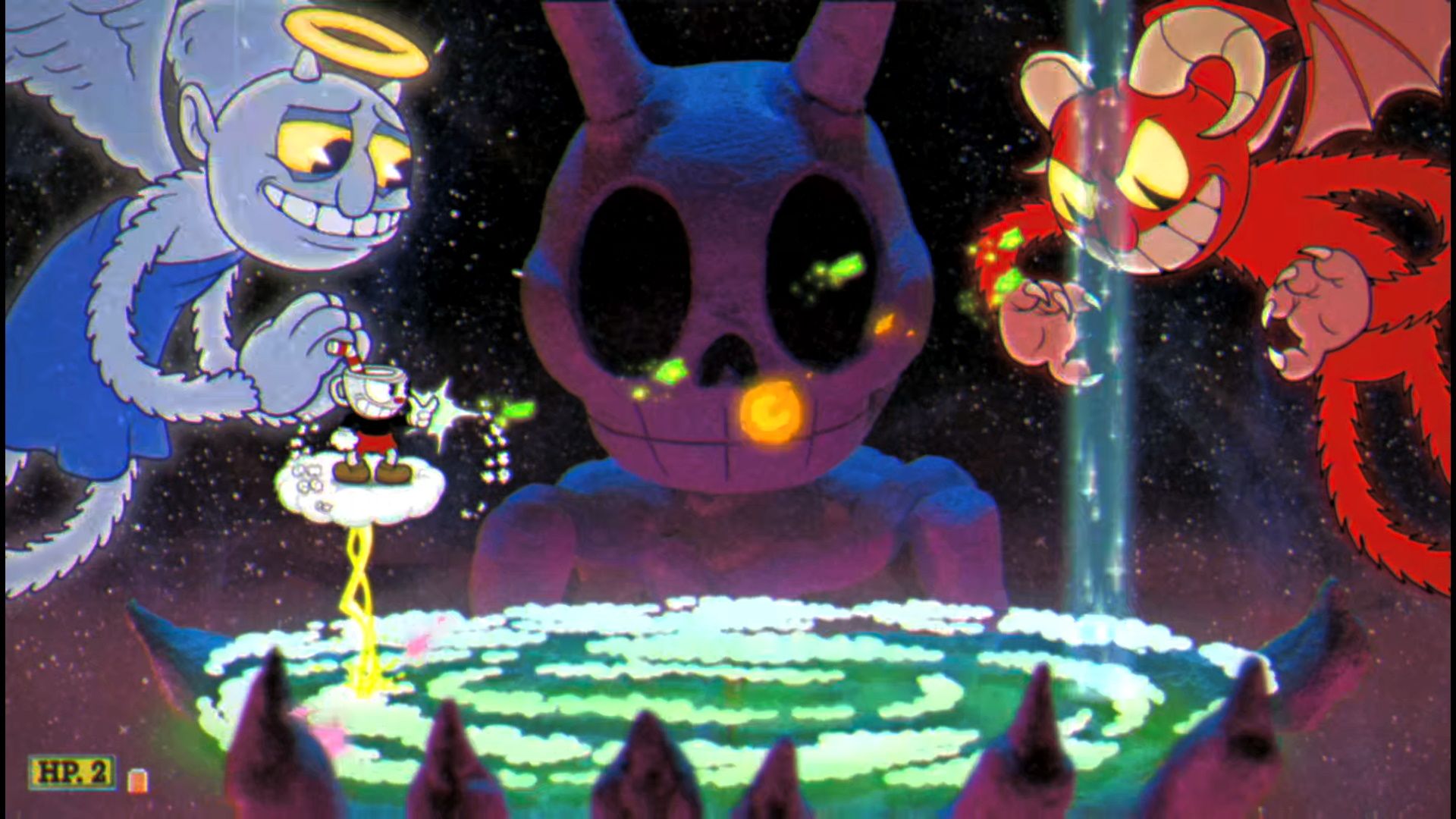 Thankfully, if you play your cards right, there is no need to ever turn around, allowing you to essentially bypass the entire mechanic of this fight. The first step is you need to absolutely make sure that you have the Smoke Bomb charm equipped. For your weapon, you are going to use the good ol' standby for zero aiming: the Chaser gun. 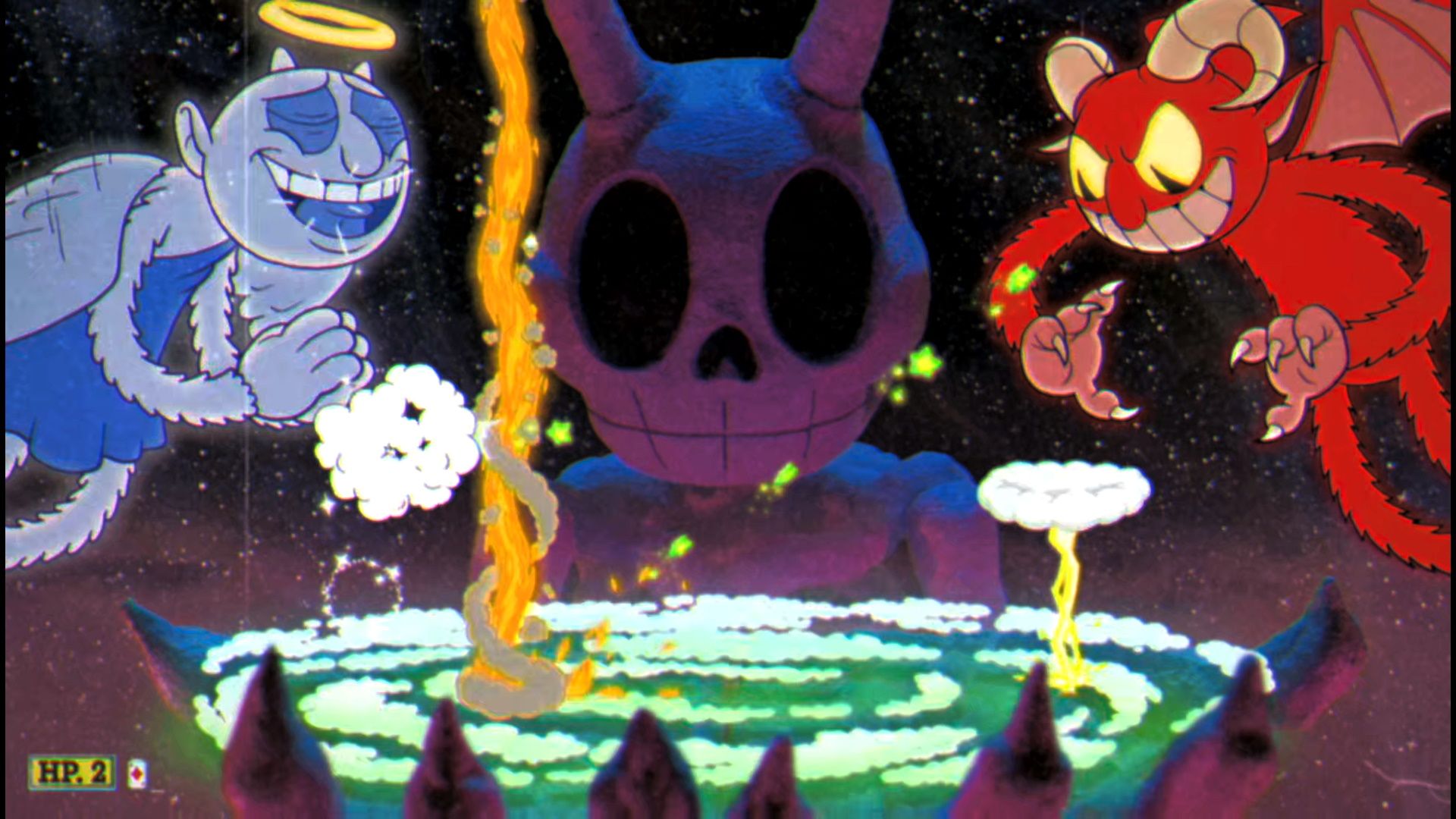 Face the devil and hold the fire button. Whenever the storm cloud approaches, hop on top of it, and hop up again as it reverses course and moves away (leaving you right where you started). You are going to want to stick to the left side of the screen. When the beam of fire comes your way, jump and dash through it. Then, jump up and hop on the cloud, and allow it to bring it back to the other side. When a fireball projectile comes your way, hop over it as well. 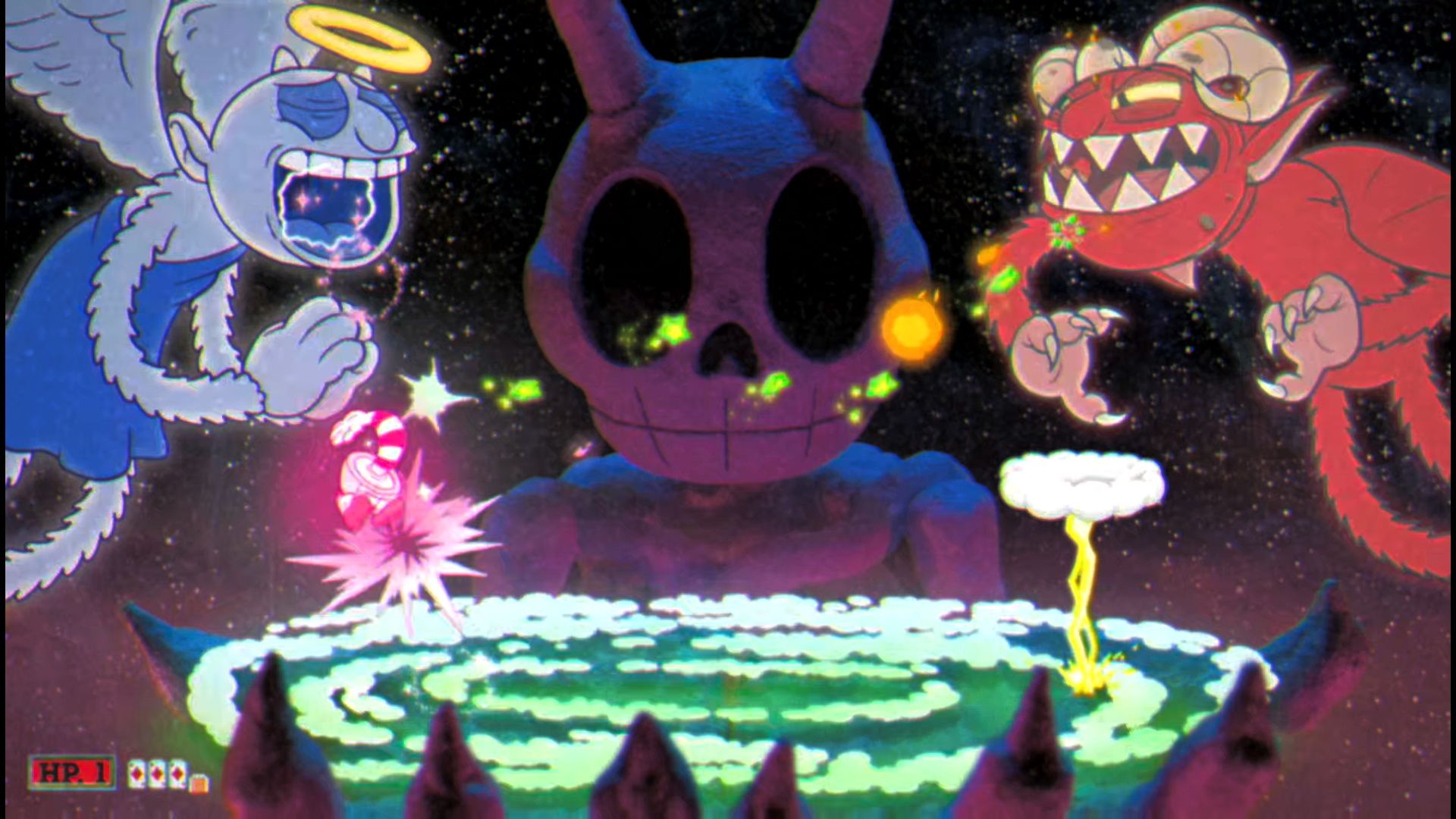 Since you are on the far-left side of the screen, you should be at an angle that lets you jump right over these fireballs. If you are frequently jumping, many of these fireballs will go over your head, as they track to where you were when they were fired. There will be parriable pink fireballs as well. These are great for giving you a little extra distance and helping you build your super bar. However, you do not need to get three parrys in this fight, as there is no grading. 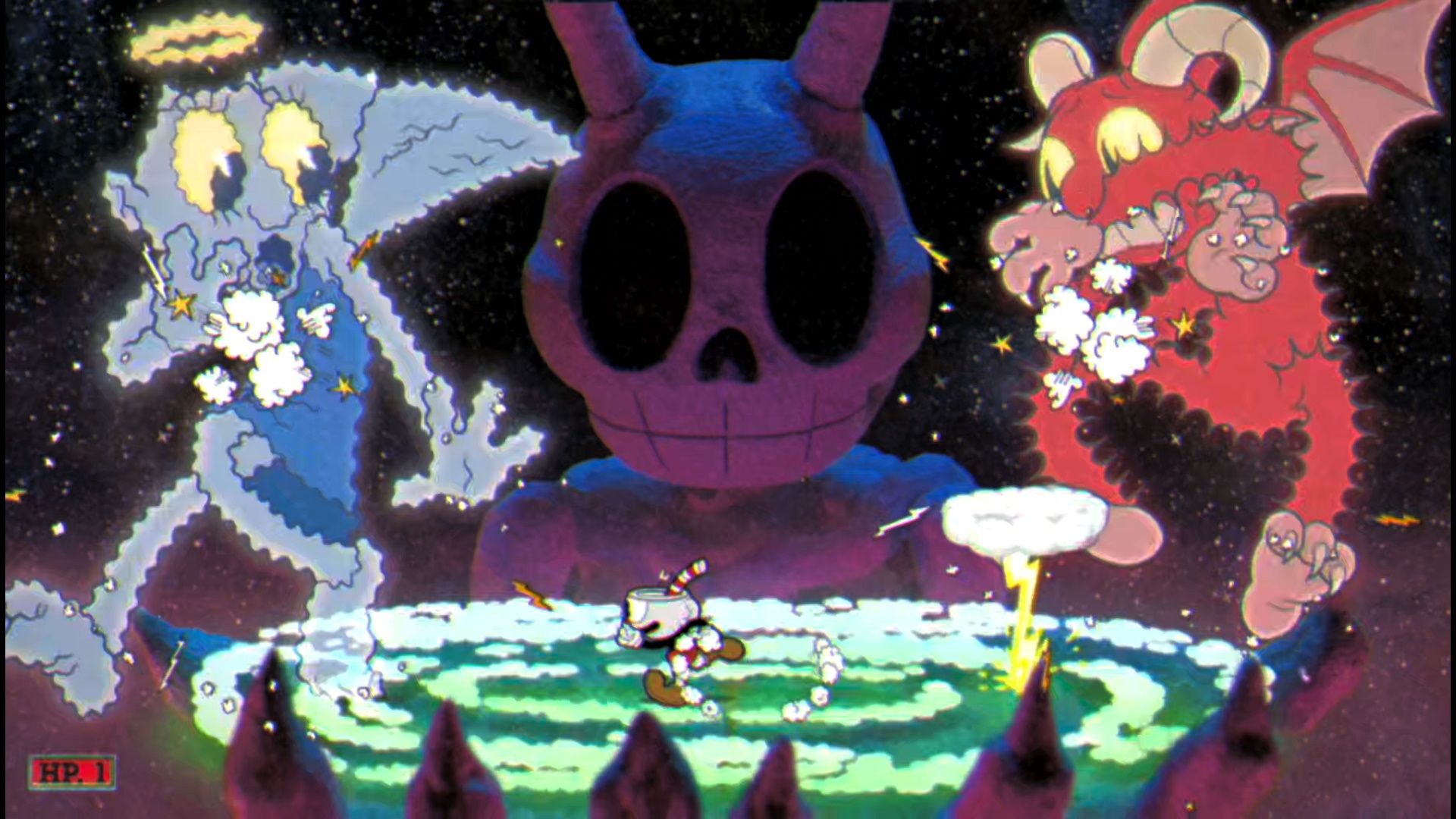 That's right. This fight does not act as a conventional boss battle. You will not be graded at the end of combat. So, don't worry about taking a little damage here and there, or getting three parries. None of that matters! You just need to get the W.

Beating The Angel The Devil With Ms. Chalice 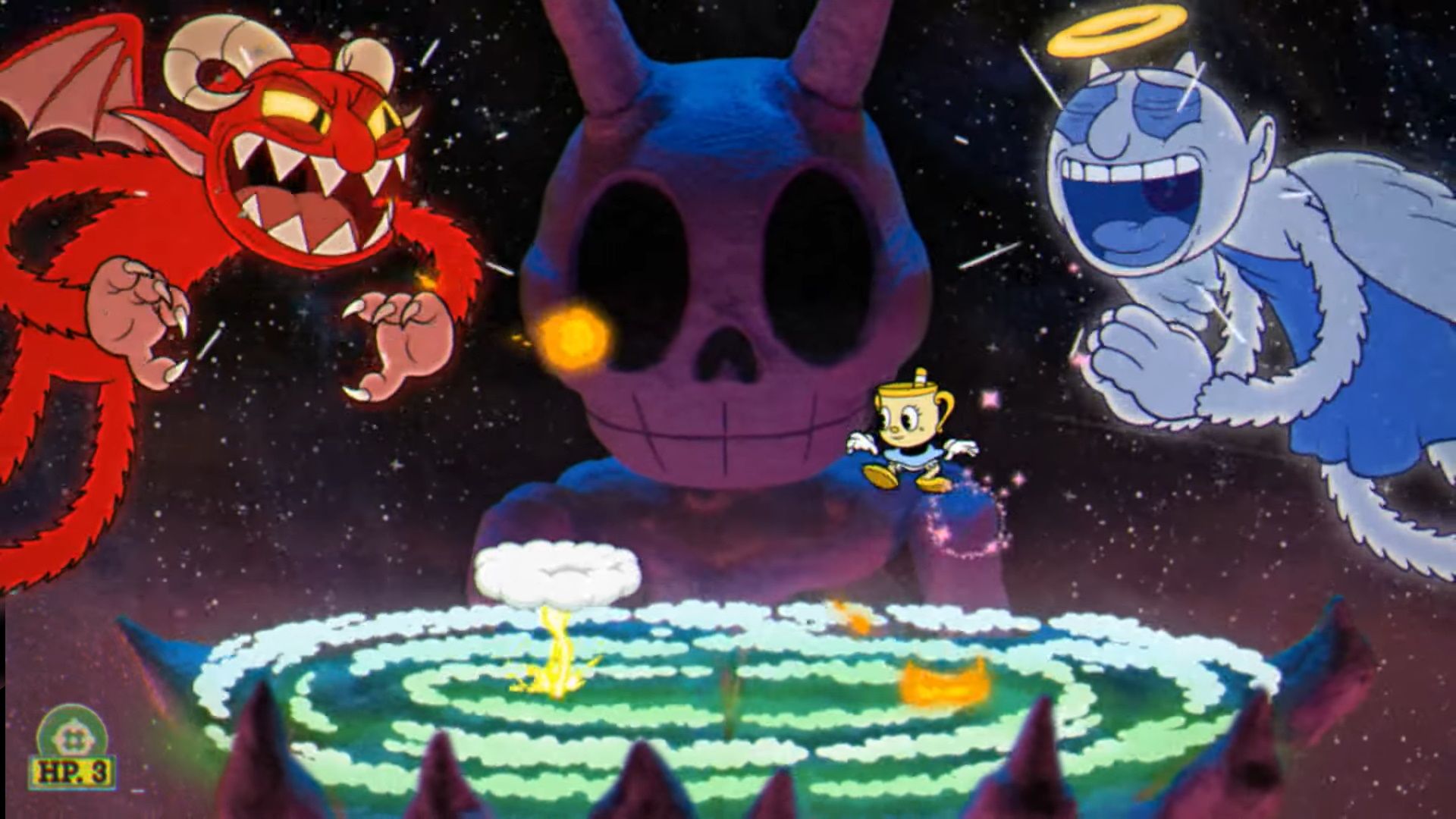 We are adding this section just for the sake of being thorough. Ms. Chalice's loadout will be the same as Cuphead's. Though, obviously, if you are using Ms. Chalice, you can't equip the Smoke Bomb. So, instead, you will have to use her invincible roll to pass through the pillar of fire. Dodging the fireballs will become even easier, as she has such excellent mobility in the air. On top of all of that, you get another hit point. The only slight disadvantage is that her dash parry isn't going to be quite as useful as the standard parry for dealing with the fireballs, but her better mobility more than makes up for that.

What Does The Cursed Relic Do? 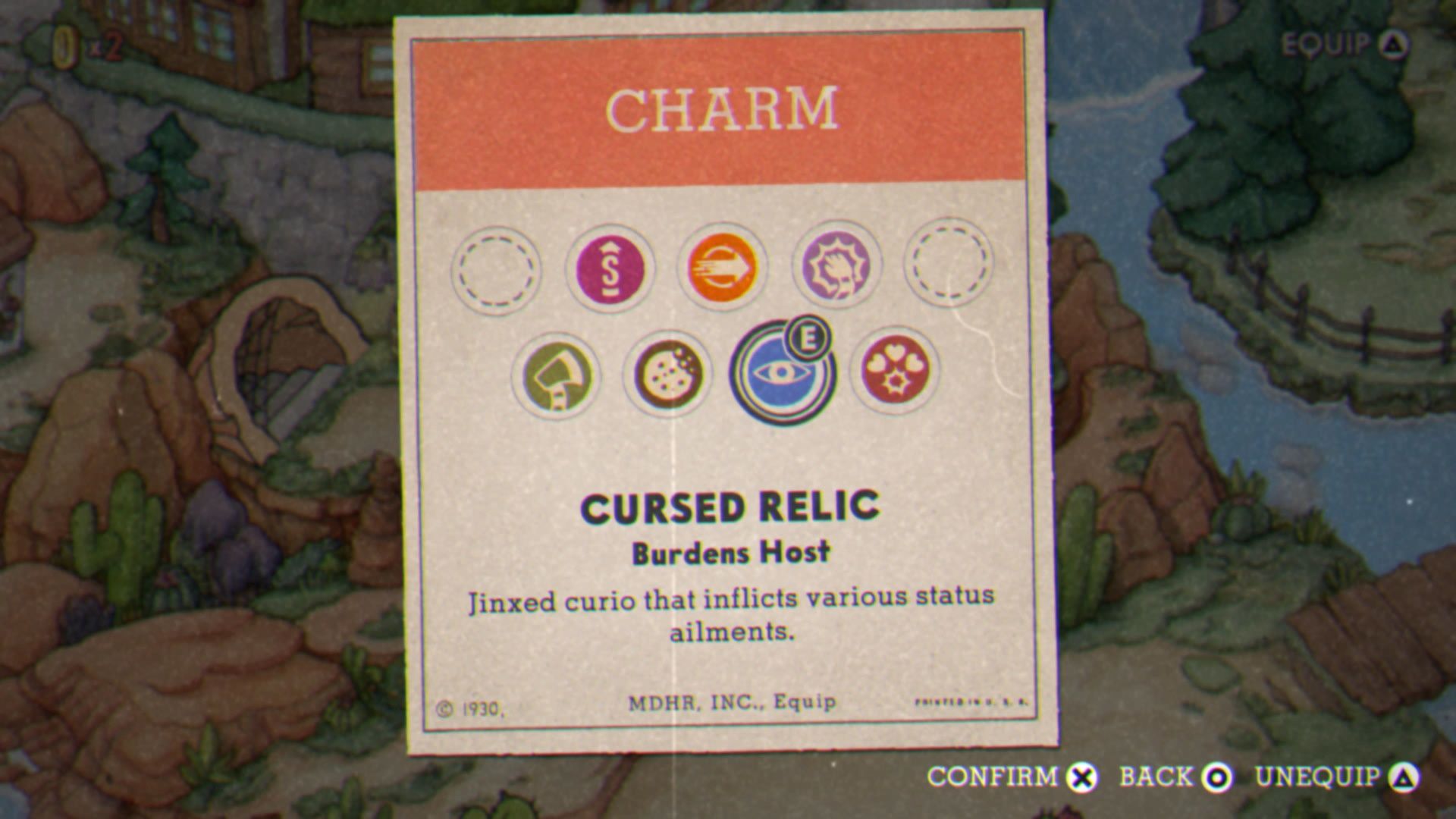 Well, you have done it, you solved the puzzle, and you have beaten the secret boss. So, what is your incredible prize? A harder difficulty, of course! The Broken Relic charm becomes the Cursed Relic. And when you equip this relic, you will have your health reduced to a single hit point. Worse yet, you will have your weapons switched on you whenever you dash or parry. 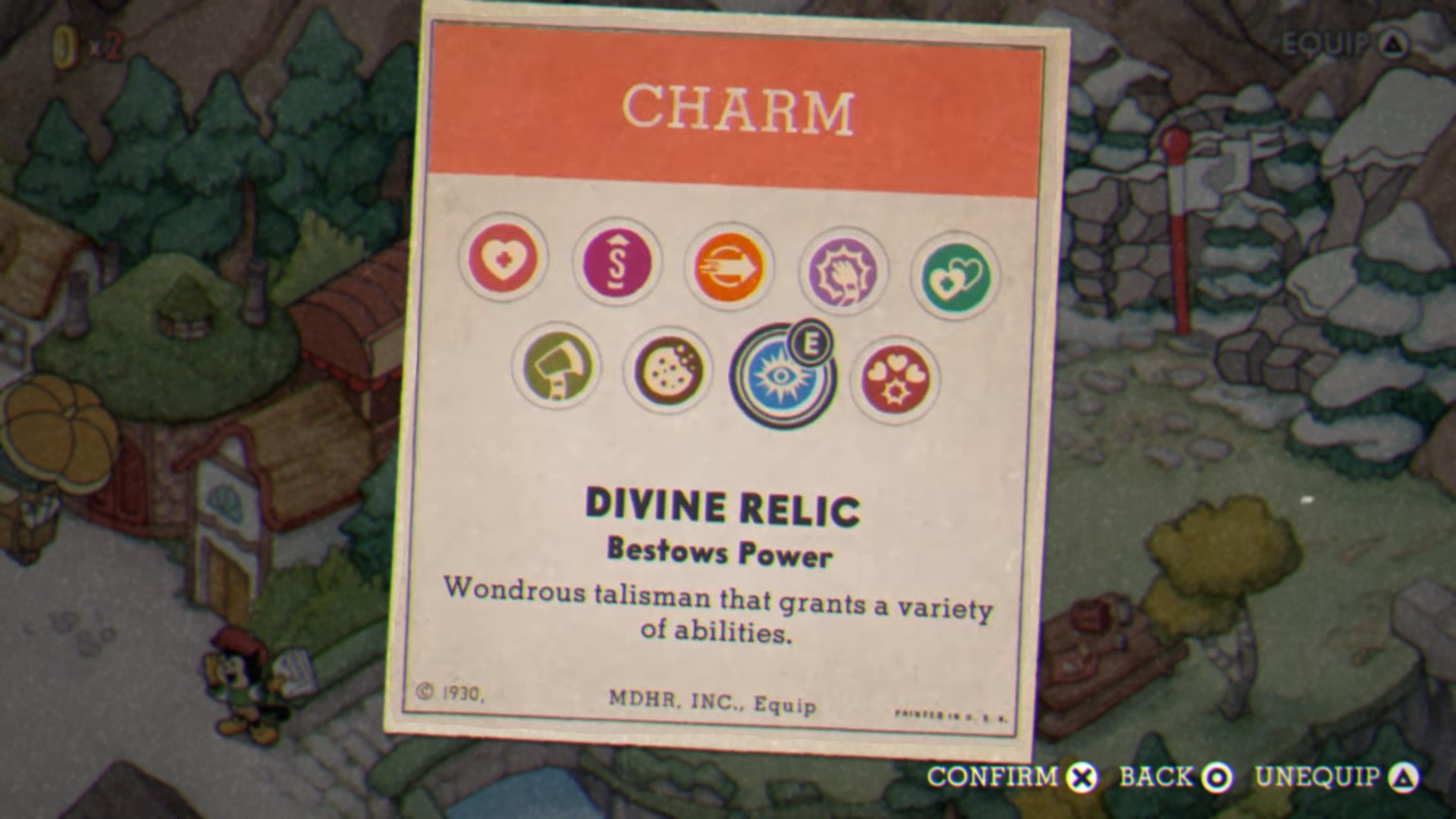 But worry not, you can turn the Cursed Relic into the Divine Relic if you beat any seven bosses while having the relic equipped. This will allow you to use the relic with normal health. Yay?

It is worth noting that we have heard contradictory things about how many bosses you need to beat in order to have the Cursed Relic transform into the Divine Relic. It took us seven bosses, but you may be lucky and find that it takes fewer than that for you!