You are here:
Home / CMON Announces Movie-Inspired Night Of The Living Dead: A Zombicide Game Kickstarter

If you’ve played any type of game, or watched any type of show or movie in the last 50 years, there’s a good chance it had zombies in it. Much of that grand zombie influence owes its spark to a single movie, George A. Romero’s Night of the Living Dead, released in 1968.

Board and tabletop game creator CMON recently announced its homage to that hallmark movie with Night of the Living Dead: A Zombicide Game. The game is a stand-alone expansion to the famed Zombicide boardgame and is available now from the Asmodee webstore or (probably) from your FLGS for $89.99.

Night of the Living Dead: A Zombicide Game places you in the roles of a few random people who suddenly find themselves trapped in an old white farmhouse together to escape from the unbelievable rising of the walking undead. According to the CMON description, the movie is more than just an influence for this expansion. The game scenarios allow you to play out the scenes directly from the plotline of the movie, in order, from the moment “the ghouls descend upon the house,” to the moment when the survivors “find a way to run the fuel pump and procure a means of escape.” Along with the scenarios, “painstaking detail went into making the tiles as accurate to the film as possible”, and even the miniatures “were sculpted to accurately recreate both the Survivors and ghouls from the movie.”

Movie references aside, Night of the Living Dead plays out like the core Zombicide game does, with players controlling their Survivor’s unique skills to complete various mission objectives, stay alive, and kill zombies. However, the expansion does introduce a few new game mechanics, such as Survivors having a “dual nature”. This is portrayed in-game by the Survivor cards being two-sided, with each side representing one of the game’s two modes of play. In Romero Mode, the characters “huddle together in fear, unsure of what’s happening around them,” while Zombicide Mode helps “the characters realize that only by acting against the ghouls will they be able to survive the night.” 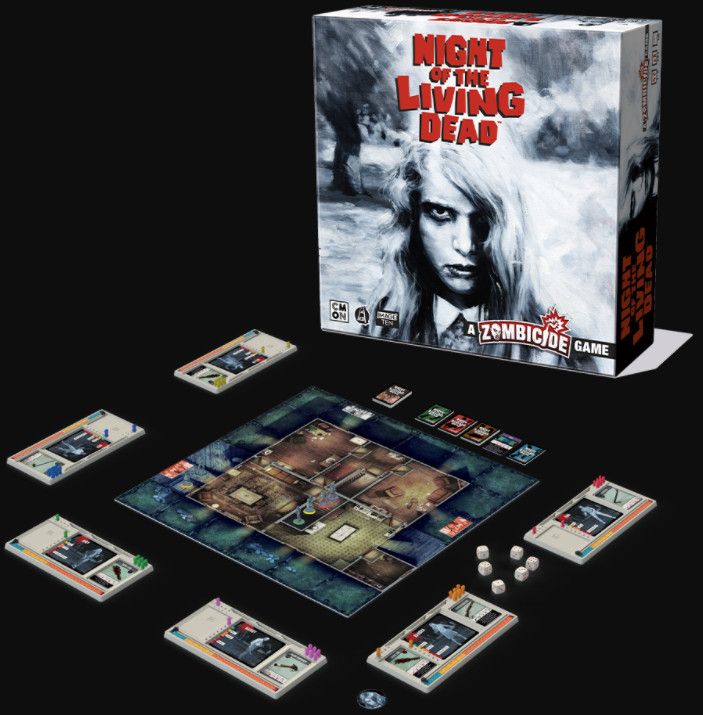 Night of the Living Dead: A Zombicide Game hit store shelves just this past October 31, but if you missed it, you can still get it before next Halloween. Find out more about the game from the official announcement and its description page.