You are here:
Home / Cloud’s Return To Nibelheim In Final Fantasy 7 Still Creeps Me Out

Final Fantasy 7 doesn't get enough credit for how creepy it is. Yeah, we all remember Barrett in his funny lil sailor suit, Tifa and Scarlet's slap fight, that dolphin flinging Cloud up to Junon, the squat competition, and Sephiroth's comically long Supernova summon. All that stuff rules and is rightly lodged in people's memories. But there are moments in this, the best Final Fantasy (don't @ me), that have always sent a figurative shiver rippling down my spine. Peering into that glowing tank in the Shinra building and seeing Jenova's weird, decapitated body ("Where's its $#&*&! head?"), exploring the eerily abandoned ruins of the Forgotten City at the end of disc 1, Cloud overdosing on magical Lifestream juice and ending up in a wheelchair spouting troubling gibberish. All incredibly unsettling, and accompanied by some of composer Nobuo Uematsu's most sinister music.

But the creepiest moment in Final Fantasy 7 comes when Cloud and the gang visit the town of Nibelheim. This cosy little village, nestled at the base of Mt. Nibel, looks idyllic and peaceful at first glance. But then it hits you as you walk into the strangely familiar surroundings of the town square: this place was supposed to have burned down. Not long after escaping from Midgar, Cloud tells the story of Sephiroth burning his hometown down in a long, interactive flashback. We're treated to one of the most iconic pre-rendered CG cutscenes of the PS1 era, where a smirking Sephiroth stares into your soul, wreathed in flame, having reduced Nibelheim to ashes. So how the hell is it still standing? It's one of the game's most compelling mysteries, and the more you learn about it, the scarier it gets. Final Fantasy 7 is funny, charming, warm, and weird, but it's a horror game too. 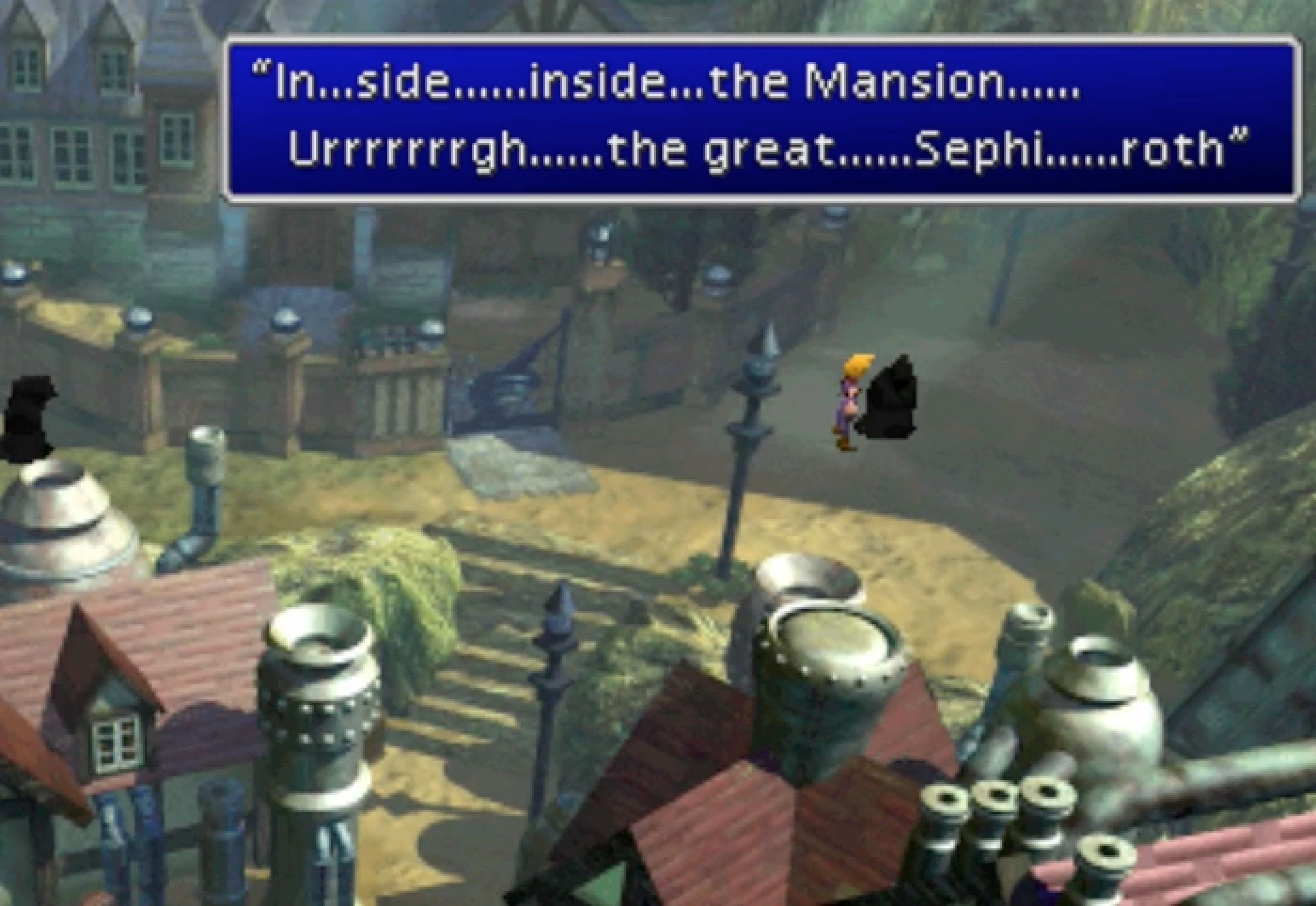 Spoiler alert for a 25-year-old game, but it transpires that the evil Shinra corporation rebuilt Nibelheim to cover up Sephiroth's rampage, hiring actors to play the townsfolk. How do you even advertise for a gig like that? I guess if you have infinite money from draining the planet's life force, it's no big deal. Tifa and Cloud were born and raised in this village, yet no one recognises them, which is disturbing enough. When Cloud confronts the fake villagers they try and turn the tables on him. "I was here until I was 14, and I don't remember you." says Cloud accusingly to someone living in a facsimile of his childhood home. "It's not nice to lie!" replies the flustered villager, clearly sweating about being found out. Yeah, good one, buddy. That'll really throw them off the scent. Shinra must have recruited this dude from the worst amateur dramatics group in all of Midgar.

But to make matters worse, the village is full of freaky little figures in black robes rocking back and forth, mumbling to themselves, repeating the word 'reunion', and chanting robotically. "Must get it… and bring it to Sephiroth… then become one… with Sephiroth." Cloud also notices that they're tattooed with numbers, adding a further layer of intrigue to the mystery. The mere presence of these bizarre, formless beings is enough to give you the willies, never mind the fact that they're later revealed to be the survivors of Sephiroth's attack on Nibelheim. In the years since the blaze they've been experimented on and injected with Jenova cells, as part of Shinra and Hojo's nefarious Project Sephiroth scheme. I can't believe Shinra went to all the trouble of rebuilding an entire village and populating it with actors to cover up its shady past, but left these weirdos in plain sight.

This whole sequence has always stuck with me—as this article, written decades after the fact, will attest. It's a combination of Uematsu's haunting music, the shock of seeing this formerly fire-ravaged town mysteriously intact, and the deeper Twilight Zone-esque horror of your childhood home being rebuilt, filled with actors pretending to be people who were once your friends and family, where no one recognises you. It's an amazingly effective slice of horror, and those Sephiroth clones, copies, or whatever you want to call them are the uncanny icing on a very weird cake. Final Fantasy 7's unhinged story veers wildly and brilliantly between melodrama, slapstick, political intrigue, and romance, but it's the horror that has wedged itself into my brain the hardest. Just hearing that eerie, melancholy Nibelheim theme tune is enough to make me feel uneasy.