You are here:
Home / Chained Echoes: 7 Beginner Tips And Tricks

Chained Echoes is a JRPG that takes a great deal of inspiration from the old-school Final Fantasy games, offering beautiful 2D, 16-bit art and a compelling adventure to boot. There's politics, intrigue, turn-based combat, and plenty of wonderful characters to get attached to. Suffice it to say there is tons of content to sink your teeth into when you start playing Chained Echoes.

A lot of it is explained to you through the game, but you'll want to learn the ins and outs of the key systems to ensure you get off to the best start. While the prologue and intro of the game are linear, you get a lot of freedom when it comes to where you explore, invest in your characters, and customise how you want to play your way through the world of Valandis. 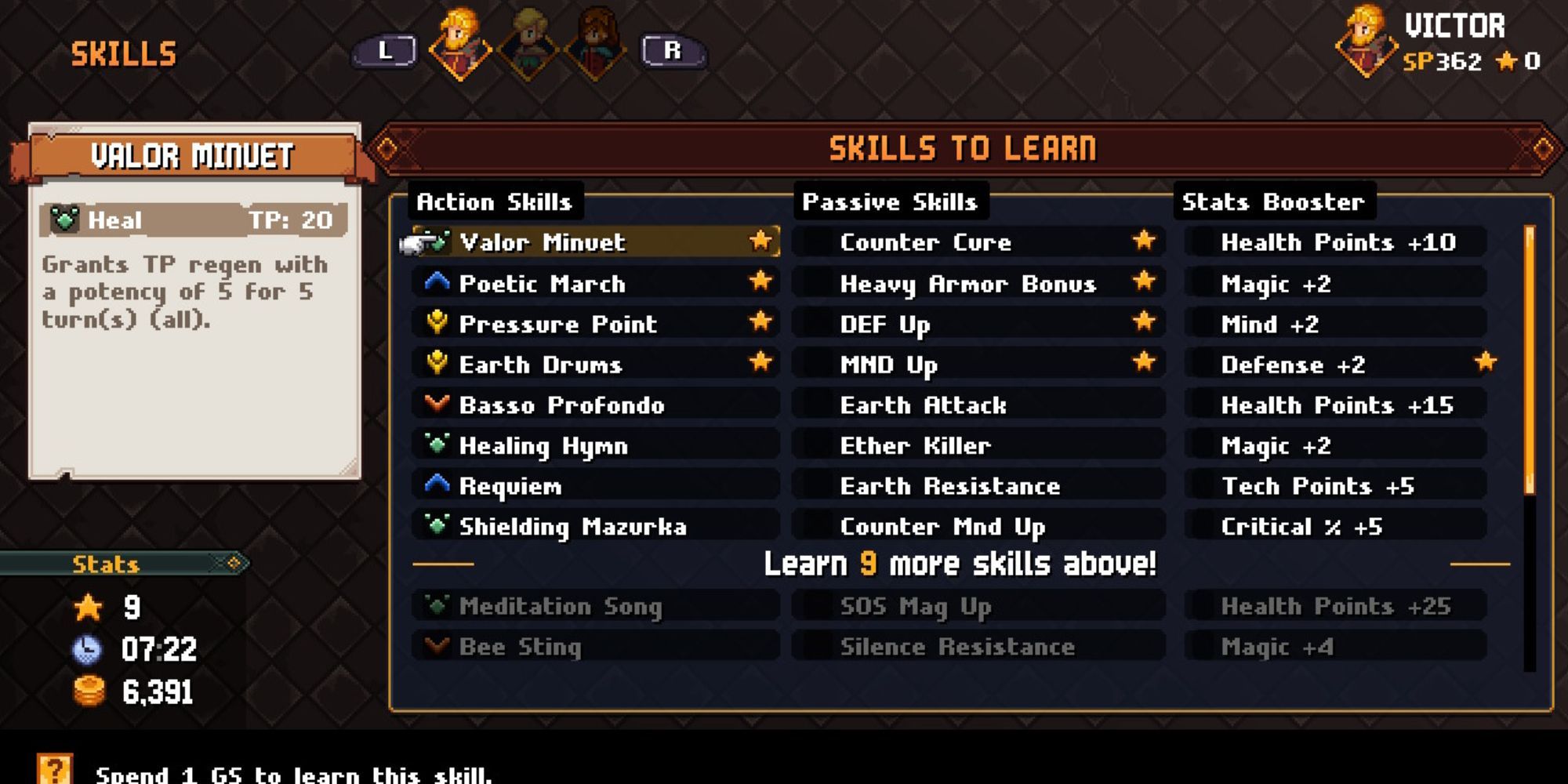 However, every little point counts in Chained Echoes, so you should take care to spread yourself evenly with your skills.

In this menu, you'll see you can spend Grimoire Shards on either Battle Skills, Passive Skills, or flat stat increases. Having more battle skills will always be beneficial since it gives you more offensive or defensive options in combat; while passives will involve abilities that let you deal more damage to specific enemy types, resist certain elements, increase dodge and crit rates, and so on.

Early on in the game, you'll be up against a lot of Beast, Undead, and Dragon-type enemies, which means you'll probably want to invest in those 'Killer' passive skills to increase your damage output. You can only equip three passive skills on each character which can be switched out in the skill menu, and for any skills to level up they need to be equipped. You get enough Grimoire Shards throughout the game to unlock every ability, so don't fret about locking yourself out of a skill.

Pilfer Everything You Can 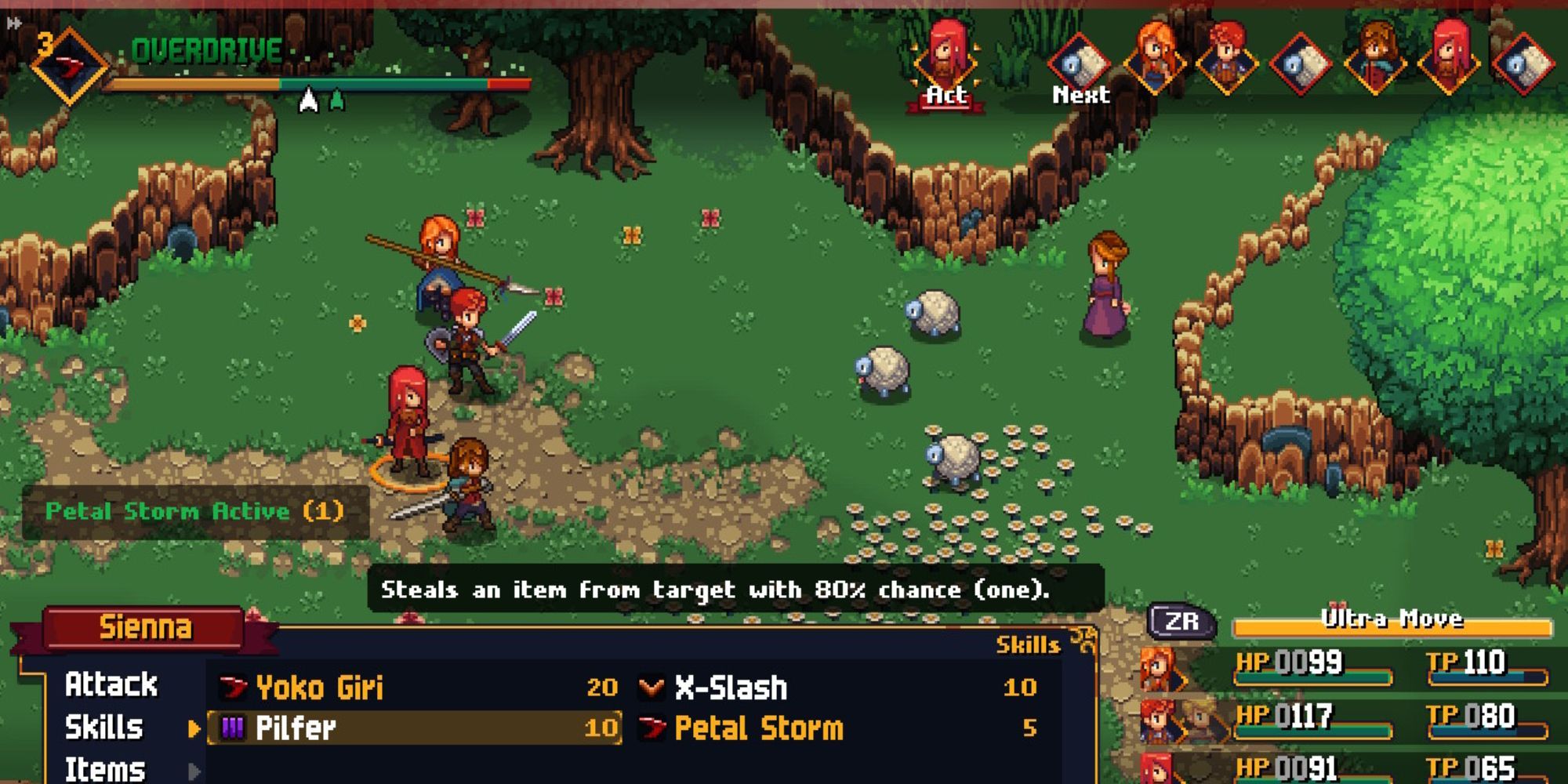 One of the main party members, Sienna, comes with the Pilfer ability. Using this lets you steal an item from random mobs and bosses, which is something you're going to want to take advantage of. Stealing can reward you with new gear, upgrade materials, and items from enemies, effectively doubling how much stuff you can get from a fight. Stealing from mini-bosses will sometimes give you a Copper Nugget, which can be sold for a tidy sum.

There will be a little tooltip icon in the battle menu letting you know if the enemy you've selected can be stolen from, so you'll never waste a turn with Pilfer. If it misses, you just got a bit unlucky. Steal rates are surprisingly generous in Chained Echoes, unlike some other JRPGs, making it worthwhile to spend a turn or two trying to snag anything extra from your foes. Just like in Final Fantasy 9, stealing from bosses will give you great rewards, but none are solely obtainable from stealing; serving as a way to get more of the same stuff, or grab a piece of armour earlier than normal.

Use Elemental Debuffs And Status Effects In Combat 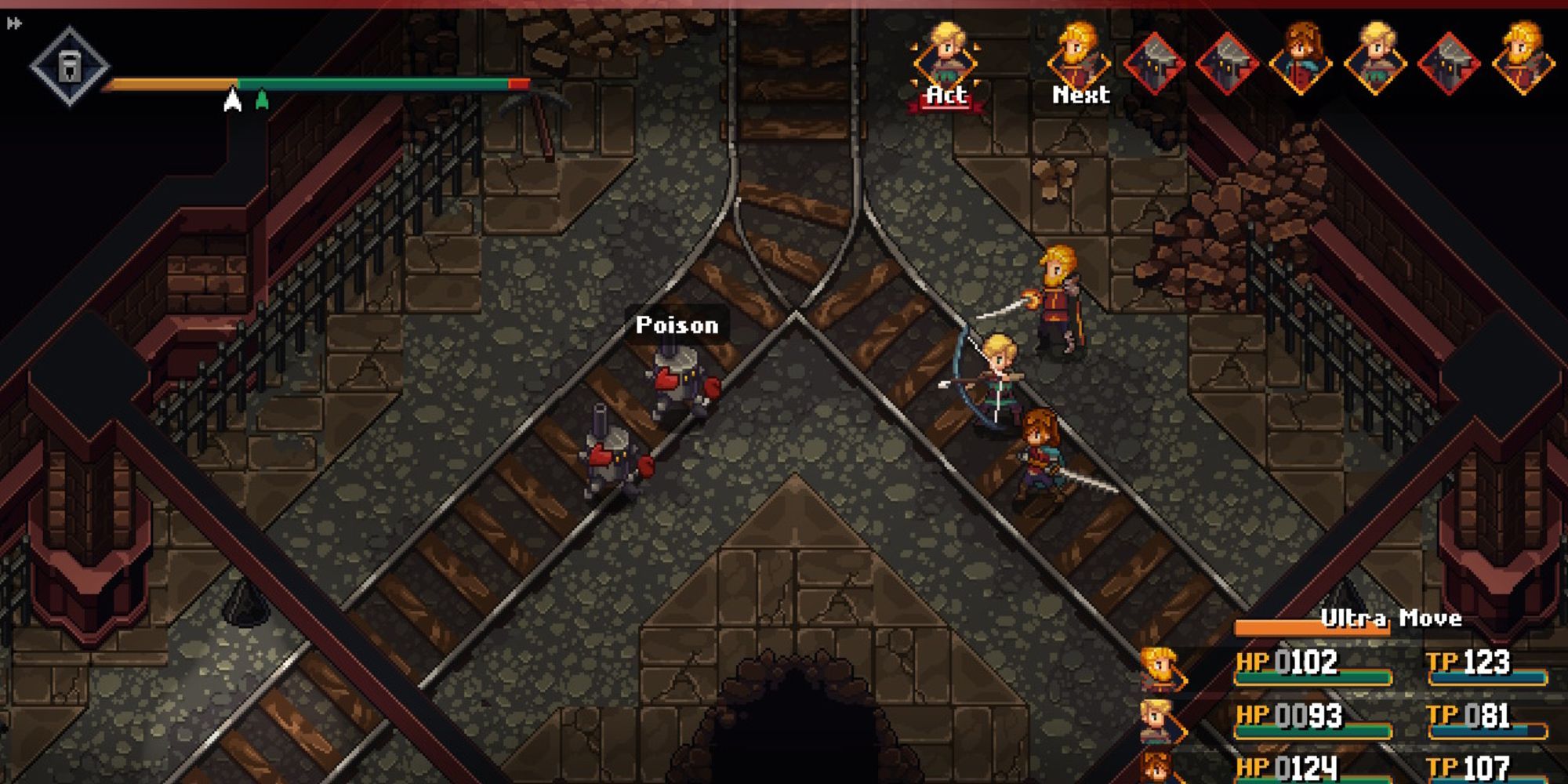 Unless there's a specific resistance to a debuff such as poison, blind, sleep, and so on, you will always inflict the status if you attack an enemy with it. From the start of the game, you'll have access to poison and bleed, both of which are extremely powerful for chipping away at powerful enemies. There's also an elemental weakness system that lets you deal extra damage if you exploit it.

If an enemy already has a weakness to fire, you can add the oil status to them; doing so will stack with the innate elemental weakness, increasing the damage even further. This is a combo you can exploit extremely early on in the game thanks to Glenn's oil-inflicting attack and Lenne's elemental strikes. Combat can be challenging in Chained Echoes, so using these systems lets you control the flow of battle a bit better and give you a leg up.

When To Upgrade Your Weapons 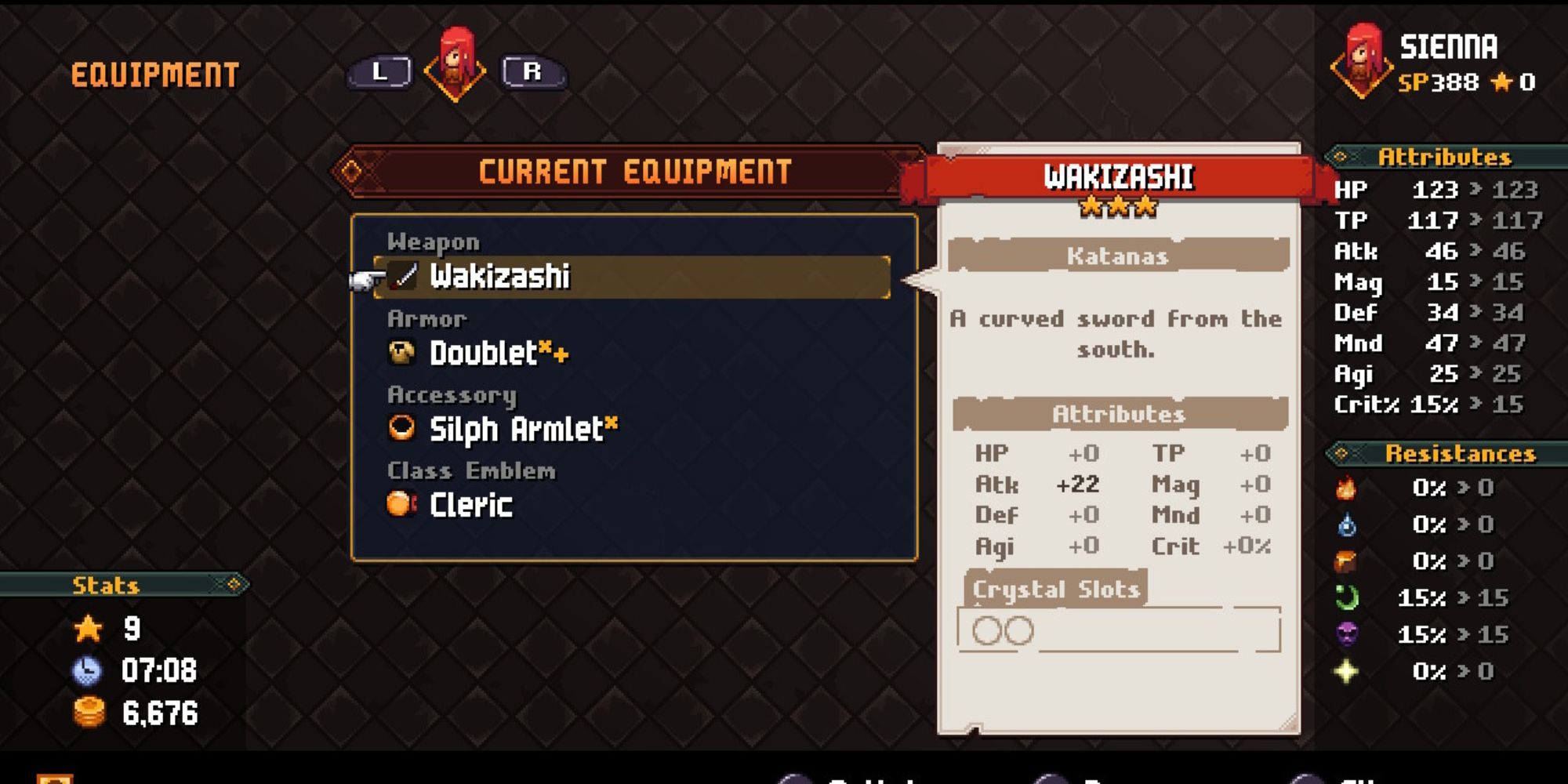 Before your party leaves the first town of Farnsport, you'll first unlock the option to upgrade weapons, armour, and slot gems into your gear to give them extra stats. While you should combine and slot gems as much as possible, you should refrain from upgrading every character's starting weapon at this time. The game makes you upgrade Glenn's Iron Sword to progress the story, so you might be tempted to do it for the rest of your characters.

At this point, however, you shouldn't upgrade any weapons because not only can you find a new one for Sienna before you leave, but you'll also find far better weapons for the rest of your party as you explore the map and get your adventure started. By not upgrading these starting weapons, you'll save yourself precious materials; when you find these other weapons, this is when you should be upgrading them.

Try To Unlock All Shop Deals 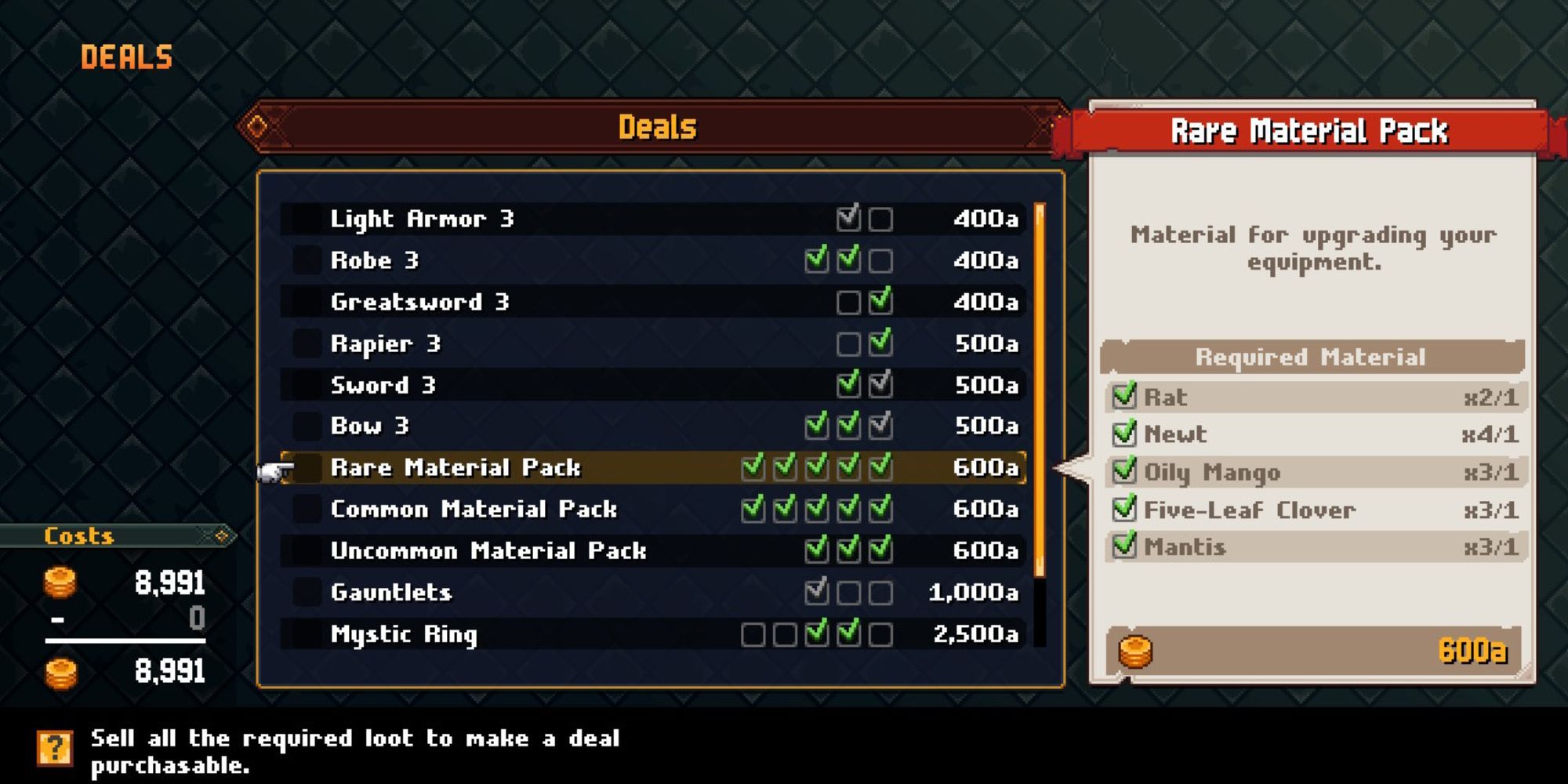 If you've played Final Fantasy 12, this system will remind you of the Bazaar deals which become available as you sell 'Loot' to any vendor. Anything in the Loot section is only used to be sold, so don't worry about getting rid of something important by accident. You can sell other things, but only if you need to make a bit more money to buy something, otherwise we'd recommend keeping hold of everything obtained.

Once you've sold the required items to a shop, you'll be able to buy a Deal that usually contains multiple items or new gear. Fulfilling and adding more shop deals is how you eventually get access to the best armour in the game, so it's good practice to sell every bit of loot every time you get to a vendor, letting you unlock more Deals in no time.

Buying Normal Weapons And Armour Is Not Advisable 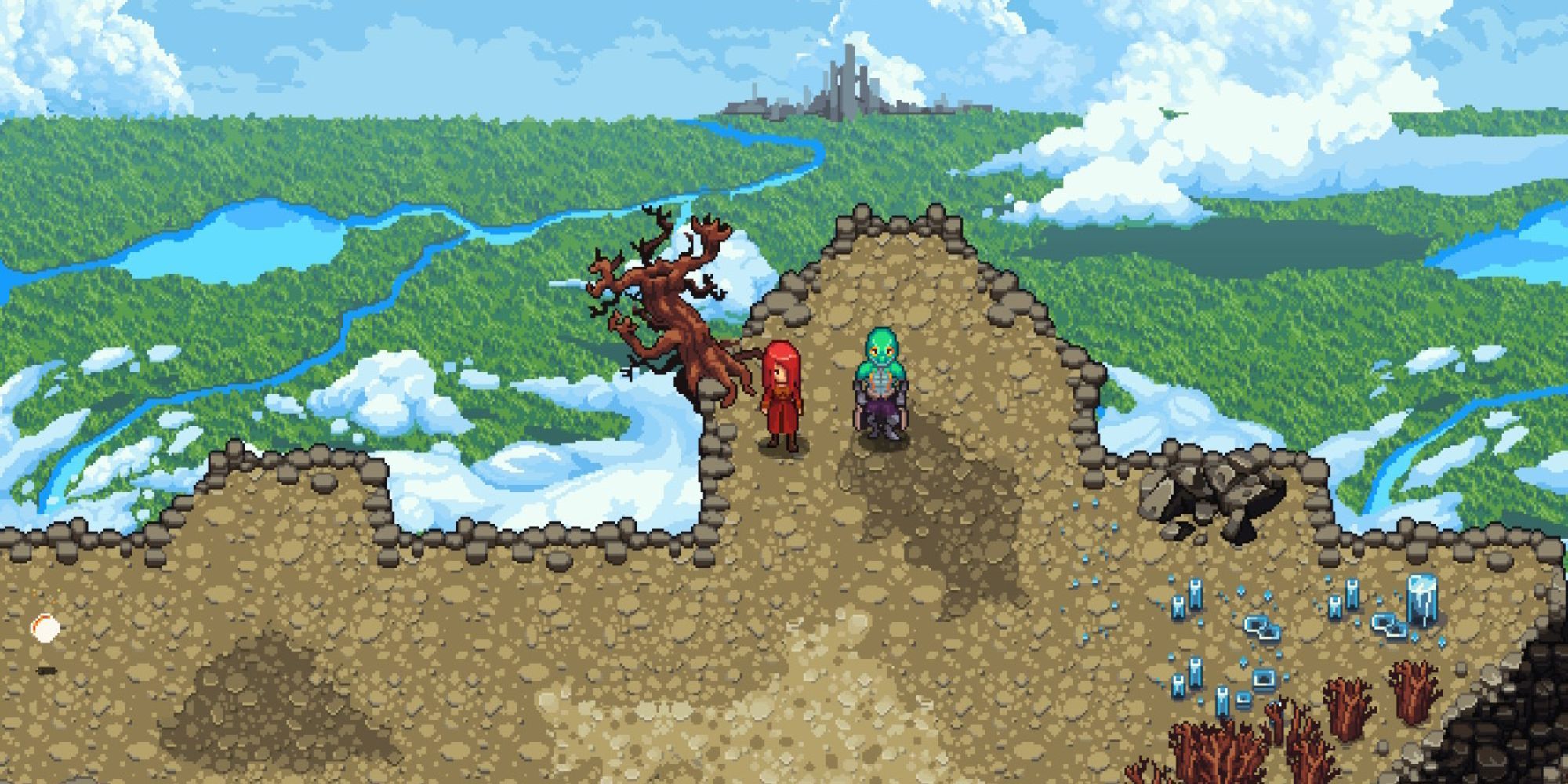 At the end of the day, Chained Echoes is a JRPG. This means that the enticing, shiny new items you find in town shops will be obtainable from opening treasure chests and exploring the world naturally. The one caveat to this is the equipment you get from Deals, which will generally always be an upgrade.

Money can be scarce when you start, but you can sell all of your old weapons you don't need anymore to make an extra bit of cash in a pinch.

You don't need these old weapons for anything, but feel free to keep them for completion's sake.

There's nothing worse than playing a JRPG and buying a new weapon only to find another one or an upgrade a few minutes later inside an optional cave. Do yourself a favour and save your funds for any extra materials you might need, you'll find more often than not that you need one or two more materials here and there instead of equipment you'll naturally find as you play.

This isn't limited to the start of the game, either. You'll want to keep this in mind every time you roll up to a new town and are itching for new gear – nine times out of ten, you'll find the same gear being sold, or something better without having to spend any money at all.