The Capcom Fighting Collection includes a number of exciting re-releases with glorious rollback netcode, but perhaps none are more frothed over than the spooky, cartoony Vampire Savior. Also known in the US under the title Darkstalkers 3, it's largely considered by the competitive community as the "definitive" version of the series for tournament play. Thanks to its speedy, momentum-heavy gameplay, a round in Vampire Savior can be over in seconds—leaving new players bewildered as to what went wrong.

Like any fighting game, though, a little knowledge and practice can be the difference-maker in your improvement. Vampire Savior/Darkstalkers might be full of blood-sucking ghouls, but you don't need occult magic to win matches—just a strong will and these tournament-proven tips and tricks should suffice.

8 Pick The Right Character For Your Play Style

Because Vampire Savior released in 1997, relative character strengths are largely understood in the context of the meta. Players have seen tournament success from every character across the tier list, but know that picking one of the lower tiers may mean your journey will be harder than it needs to be. For example, Anakaris does not have access to the otherwise universal push-block mechanic—a mechanic that is largely considered one of Vampire Savior's most important components.

Here is the commonly accepted tier list, as provided by tournament organizer Robinator at Mizuumi.net:

There's a more important aspect to character selection than tier alignment, though: you should find a character that fits your goals. Across the cast of 15 characters is represented a wide variety of offensive and movement techniques, and the character's abilities themselves are just as diverse. Comfort with your character trumps all else, so explore the cast in training or arcade mode just to get a sense of what feels right!

7 Get Used To The Game Speed

Vampire Savior isn't just a fast fighting game, it's the technical inspiration of most of the anime air-dashing genre (e.g. Guilty Gear) made in its wake. There are a number of reasons for this—fast walk speed, instant transitions between rounds, and high air mobility all make Vampire Savior's gameplay volatile and exciting. If that sound stressful, remember: your opponent feels the same way!

Despite this, there's still an old-school focus on shorter combos and deliberate spacing, making Vampire Savior a fascinating middle ground between Capcom's more reserved output and the air-dash heavy sub-genre yet to come.

A new round instantly starts in Vampire Savior wherever the fallen combatant lands on stage. This makes Vampire Saviour one of the very few fighting games where you might start a round in the corner.

6 Learn When To Air Block

Manipulating your jumps in Vampire Savior is crucial, and one of the universal skills that allows this is air blocking. By holding any backward direction while airborne, you can block almost all attacks—with the exclusion of grounded normal attacks. These facts, particularly when combined with the character-specific ways characters can use air momentum, make jump approaches particularly potent. It even blocks most dragon punches! Long considered a staple of the genre, dragon punch-type moves have more niche use in Vampire Savior due to their weakness to air blocking.

However, air blocking too often can leave you open to counters, and characters with good upwards-swinging ground normals (e.g. the kung-fu werewolf Talbain's close Heavy Kick) can prey on your over-reliance of the mechanic. 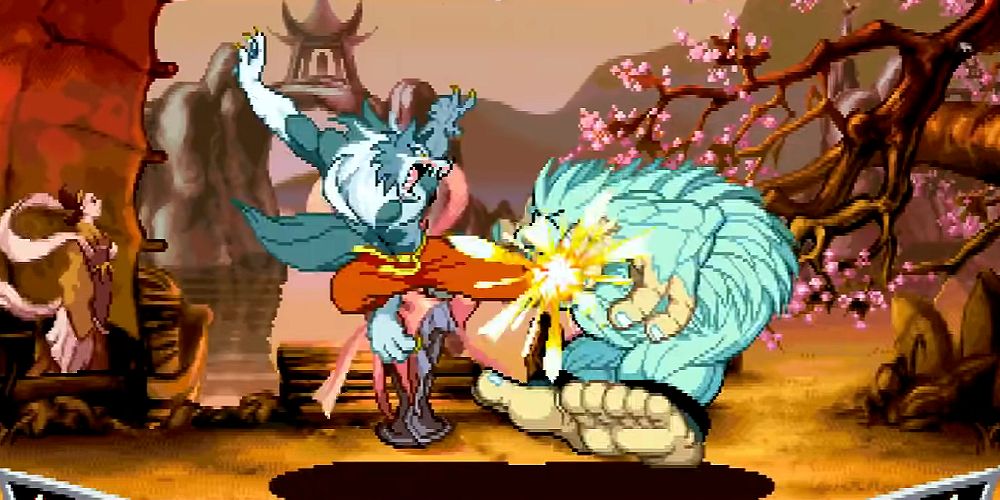 Broadly speaking, there are four categories of dashing in Vampire Savior: ground dashes, jet dashes, hop dashes, and teleports. These all have different properties, distances, and cancelable options, so familiarizing yourself with your character's palette from the dash is critical for keeping your momentum going. Of particular note is that ground and hop dashes can be shortened with a back input—as these are the most common dashes in the game, you'll want to learn to master this technique.

In addition to the above dashes, a few characters have air dashes. Just like their grounded counterparts, these are powerful movement tools that carry the added advantage of altering jump arcs. Air dashes can confuse an opponent's sense of where and when you might land—and open them up for big damage. 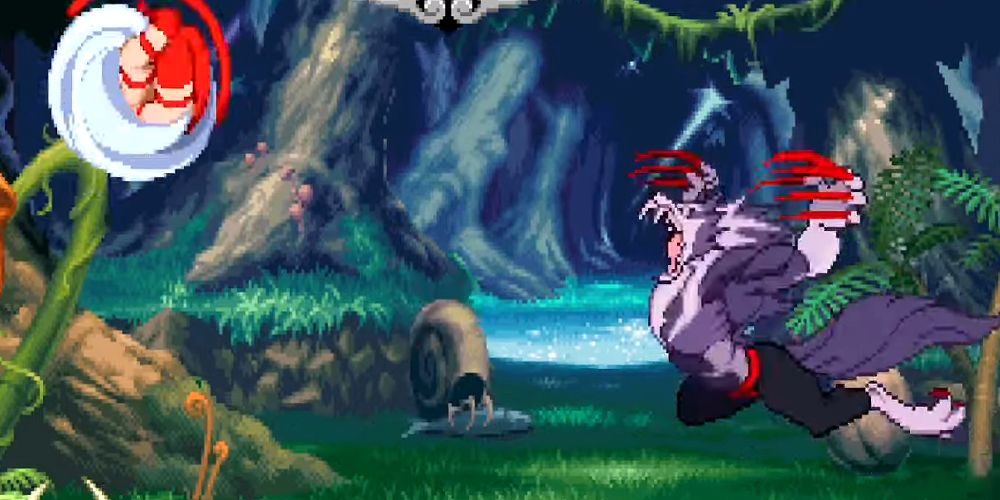 Expanding on the above technique is the quirk that most dashes are cancelable in some way. As previously mentioned, a back input will cancel your dash—and the reason why this is important is that it gives you access to stronger mix-ups and pressure than you otherwise would have.

An obvious use for this is dash-canceled throws. The fish-man Aulbath, for example, can dash under a fireball with his low-profiling crouch dash, then cancel the recovery of the dash into either his normal or command grabs.

3 Chains, Links, And Cancels Make Up Your Offense

Chains, or the ability to directly cancel normal attacks into each other, are the backbone of Vampire Savior's offense. While they're relatively easy to pull off, chains need the next button press to be input within a certain window, which means speed and timing are important.

It's also important to understand that chains, while powerful pressure tools, are not cancelable into special moves. Because of this, some characters may also need to use links—a type of combo that results from a move hitting during the remaining hit stun of a previous uncanceled move. The strategy you'll employ in Vampire Savior depends heavily on your understanding of how to use chains and links in conjunction with each other.

Here are two combos with Lilith that should explain the difference between "Chains" and "Links."

This combo exclusively uses chains and scores a simple knockdown. Easy to do, can be dialed.

A more difficult combo that requires you to "link" after doing a cr.LP chain. The simplest way to think of this is that you're delaying slightly between LP and MK so that you don't chain into the buttons.

2 Guard Canceling Can Save You From Pressure 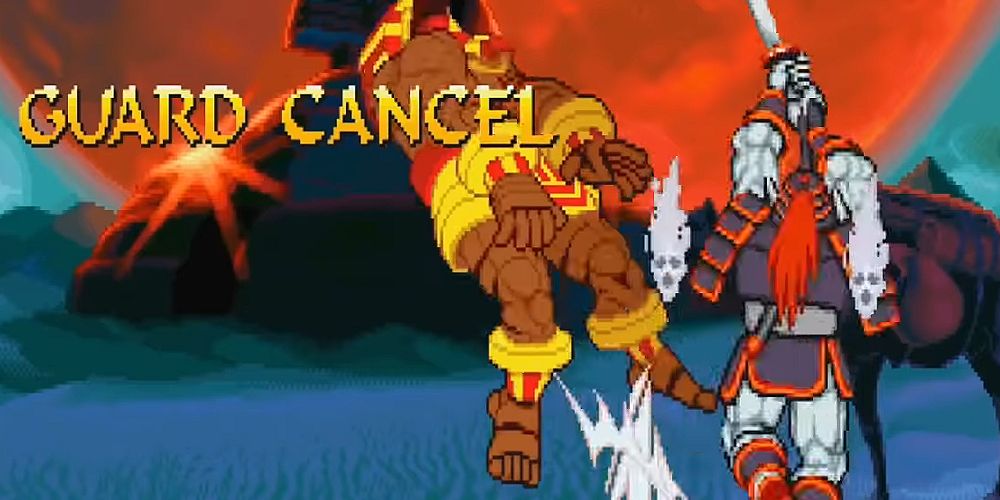 Guard Canceling is a vital mechanic that allows players to escape strong pressure. While blocking an attack, each character in the game can input a specific special move—always with the traditional dragon punch input of Forward, Down, Down-Forward+Button. Once input, the player will cancel the block stun of whatever it is they were blocking and retaliate with their designated guard cancel attack.

While this varies in application depending upon your character (Anakaris, for example, has a guard cancel so bad that it is unsafe on hit!) it is a valuable defensive tool most players will need to learn to escape the otherwise pressure-heavy environment of Vampire Savior. 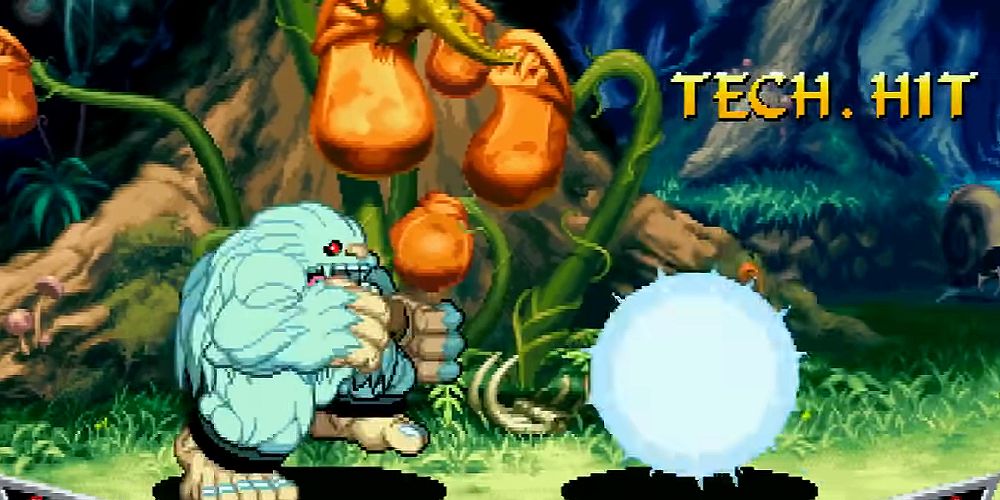 Known by a few names in different communities (Push Block, Advanced Guard, etc.) Vampire Savior's "Tech Hit" system is as complicated as it is important. By inputting 3-6 unique inputs while in block stun, you'll push away the enemy a significant distance away. Why is the number variable? Believe it or not, it's because there's a little RNG involved:

Each input has a chance of successfully rendering a tech hit, and each successful individual input (in other words, you can't press all six buttons on the same frame and expect it to count as six inputs) increases in the likelihood of success.