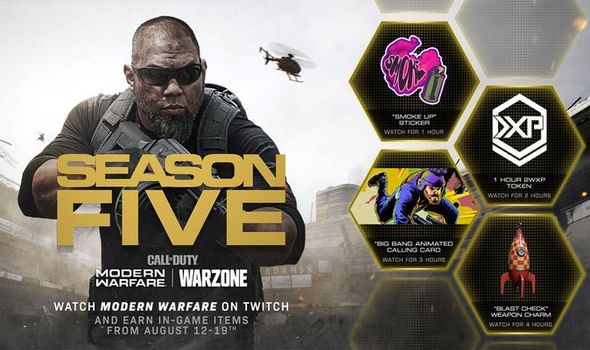 Call of Duty Modern Warfare Season is now in full swing and gamers can expect new content and gun changes in the coming weeks. There’s plenty of speculation right now regarding what will happen with the launch of COD 2020, which is expected to be called Black Ops Cold War. Recent reports suggest that COD Warzone will continue to be supported when the new game arrives.

This could mean a new map launching, providing a good way to transition away from Verdansk and Infinity Ward’s support.

Teasers are being shared but the big reveal isn’t expected to happen until some time after August 14.

Meanwhile, gamers can look forward to another round of Call of Duty Warzone Twitch Rivals later today.

The EU event has already wrapped but August 13 will see the launch of the NA side of Twitch Rivals.

A message from Twitch Gaming explains: “Twitch Rivals will run a competitive Warzone tournament featuring a format that will be split into two (2) phases: Leaderboard Challenge and Main Event.

“The /TwitchRivals channel is home to our anchored studio show and serves as a spotlight for participating Partner and Affiliate streamers as they face off in streamer vs streamer live competitions.

“You can also tune into the channels of anyone participating in an event to see their unique view of the action along with their community.”

THE MAIN EVENT FORMAT IS AS FOLLOWS:

On drop eligible streams you’ll see a callout that “drops are enabled”, so you know you are officially watching and earning. From there, you can click the stream and enjoy the gameplay.

You can watch multiple streamers or one stream but as long as they are “drop eligible” your total watch time will be tallied up, so you can earn rewards.

Here are the watching rewards confirmed by Twitch for Warzone Season 5:

Call of Duty Warzone is available to download for free across PS4, Xbox One and PC platforms.