You are here:
Home / Better Call Saul Just Broke Our Hearts, But It’s For The Best

Better Call Saul Just Broke Our Hearts, But It’s For The Best

Spoilers for the latest episode of Better Call Saul

This week’s episode of Better Call Saul was all about consequences. Almost six seasons of love, loss, and debauchery from Jimmy McGill and Kim Wexler came crashing down as the outcome of their actions stepped into the light. Howard Hamlin is dead, and a life once defined by chasing thrills and abusing the very law they sought to uphold has ended in sombre tragedy. Now, the only way to move forward is to break apart.

But it isn’t that simple. Kim and Jimmy’s lives are integrally linked to that of Howard Hamlin. Their entire legal careers learned from the law firm they intended to annihilate in their affair with destruction, believing that years of resentment justified the pursuit of making one troubled man’s existence an unending misery. While they didn’t pull the trigger that ended his life, blood is almost certainly on their hands.

Lies piled upon secrets piled upon schemes all culminated in a moment of loss so monumental that it tore apart foundations our main characters once thought unbreakable. We knew this ultimatum was coming, the existence of Breaking Bad dictates that Kim and Jimmy inevitably go their separate ways, either through death, heartbreak, or betrayal. But the show has done such a phenomenal job building these people up into flawed figures we care for and despise in equal measure, begging them not to linger so close to the precipice in the fear they’ll fall victim to their very worst vices. Fun and Games saw that happen and it broke my heart, while also ensuring that, for now, Kim Wexler escapes the clutches of death. Better Call Saul is the best prequel ever made. It’s an effortless masterpiece that somehow usurps the characters and storytelling of its predecessor to create a legal drama without rival. We entered this world keenly familiar with Saul Goodman, but we knew nothing about Jimmy McGill. This optimistic, charming, and rather dirty lawyer was a good man, one who fought for the approval of his friends and family while always stuck in the shadow of something he could never live up to. He was never going to be better, so he settled for less, opting to abuse the system he had come to know so well instead of doing the right thing.

Kim stood by his side through all of this, coming to develop a similar sense of resentment toward those above her as she was forced to work through menial task after menial task instead of receiving the recognition she so rightfully deserved. When Howard Hamlin suddenly decided to offer Jimmy and Kim the rewards they’d been waiting for, it was far too late, so they walked away in a show of defiant bitterness when in actuality, accepting it might have saved them. Instead, Jimmy took on the Saul Goodman moniker and embraced a life of criminal defence, while Kim opted to represent the general public out of common decency instead of the stuffy corporate clients that might have made her a millionaire. This common ground saw them fall in love, finding attraction in toying with others and proving themselves to be the smartest people in the world, even if it meant punching down on those who simply didn’t deserve it. 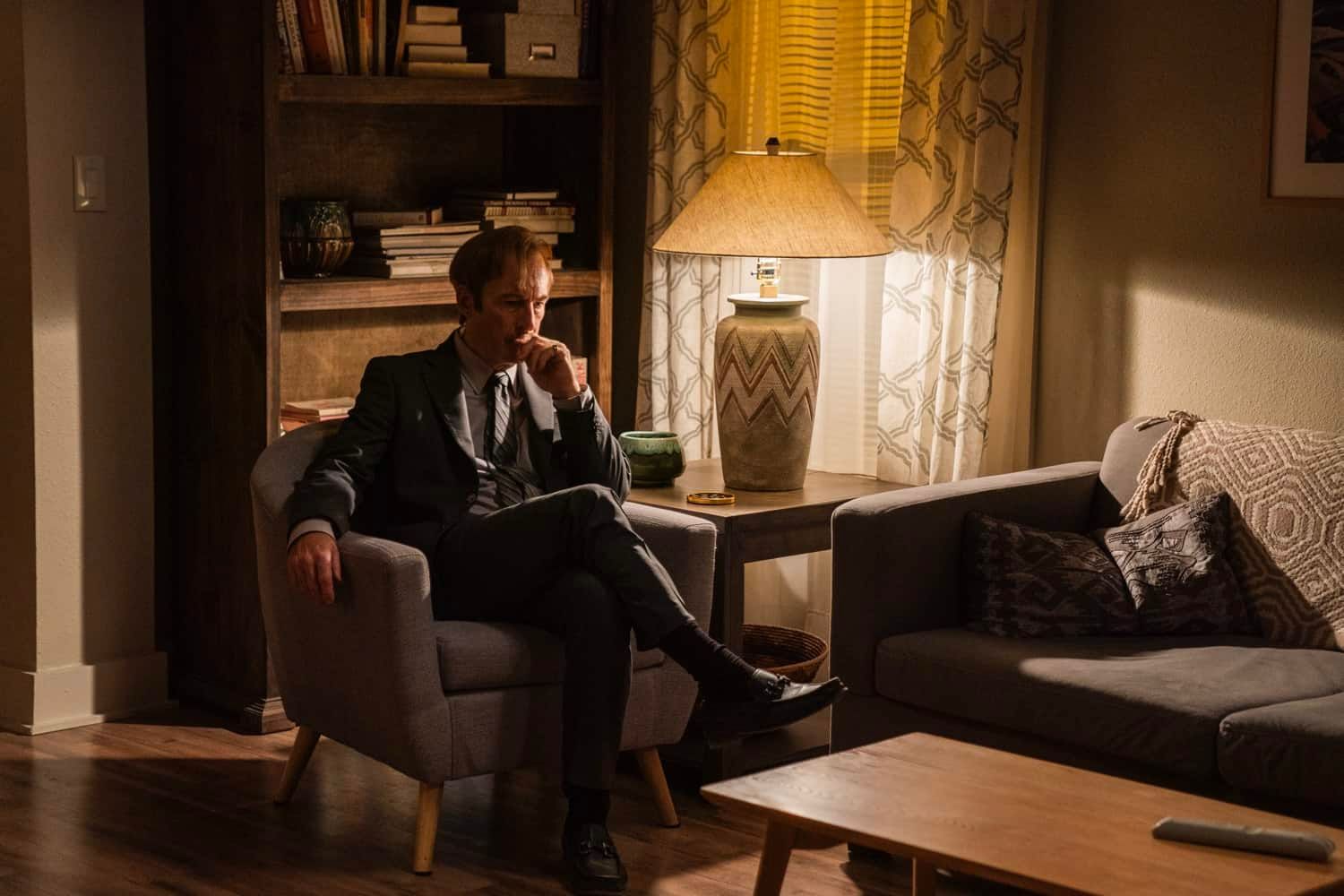 Innocent pranks came to destroy lives, and it slowly became clear the only endgame here was tragedy. The moment Lalo Salamanca walked into their apartment, following in the footsteps of a comatose Howard Hamlin, they both knew it was over. Kim and Jimmy could take over the world by lying to other people, but it was lying to themselves that saw the trigger pulled and blood spilt over an apartment that was once their sanctuary. Despite knowing the eventual destination for so many of these characters, watching the fallout was devestating. It all starts with the replaced bin lingering outside the parking lot elevator of their former workplace. Jimmy used to kick this thing to pieces as Kim waited outside, cigarette in hand for her partner to pinch as his outburst subsided. Now it was repaired, with those who used to taunt them ready to move on in the wake of a death they indirectly caused.

It’s Kim’s final lie in the face of Howard’s widow that seals her character arc. She reinforces the story of his false drug addiction to a mourning wife, retelling an anecdote with conviction so confident that nobody in the room doubts her. Those who do are so stricken by grief that they couldn’t tell the difference anyway. But Jimmy does. He looks on in horror at the monster he indirectly created. Kim wanted to be there for him after everything they’d been through, but her own perception of right and wrong became warped by a man who was more in love with the thrill of trickery they conjured up together than the actual bond between them. Now, even in the face of death, she continued to weave a yarn of deception. 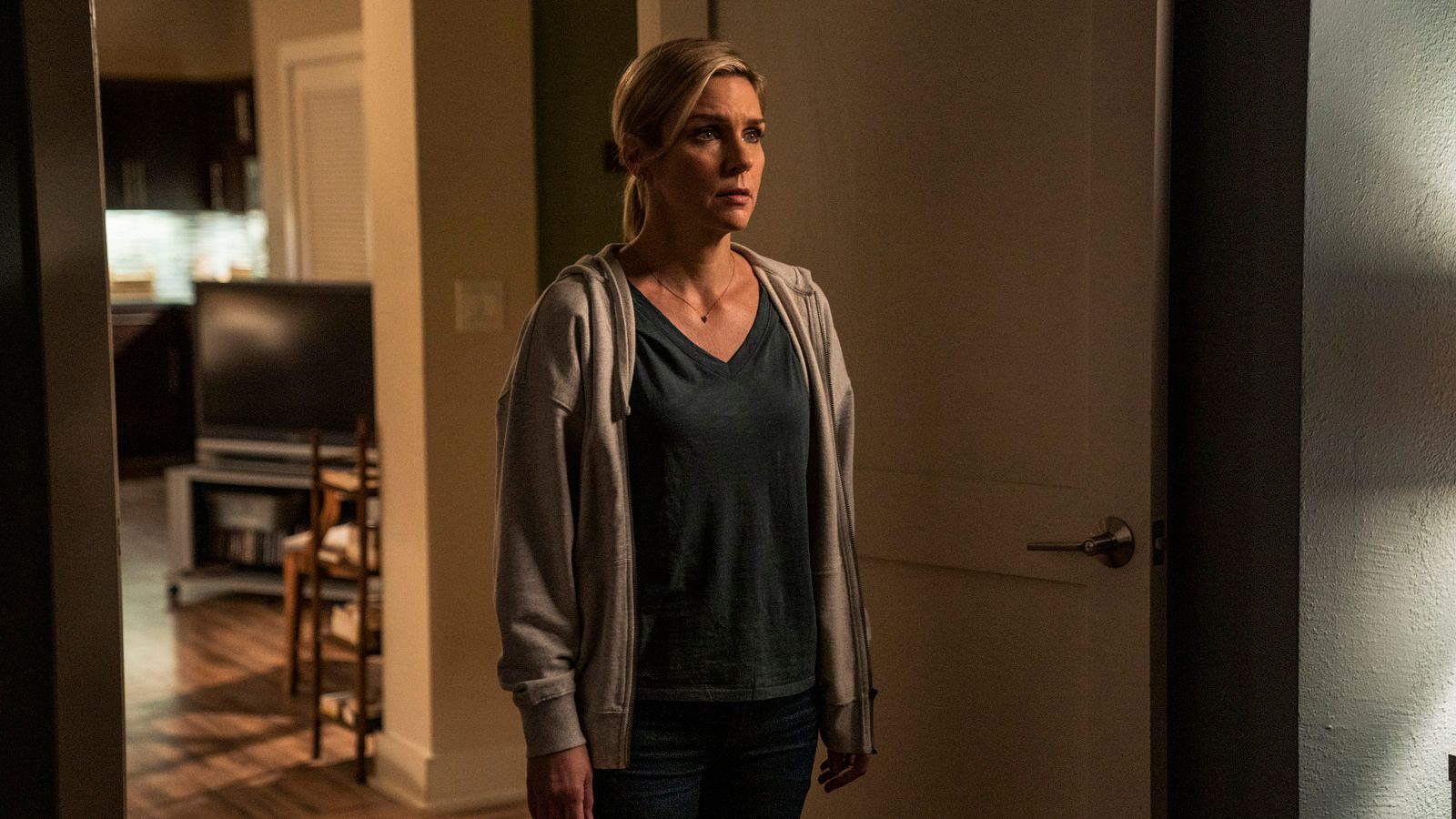 In the parking lot, we see them share one final, passionate kiss before Kim drives away and leaves him behind. The next day she resigns from the bar and starts packing her bags, ready to leave everything behind because in reality, it is the only way forward. Jimmy bursts into their apartment, begging her not to leave, to avoid throwing her life away because of something he views as one little mistake that wasn’t their fault. But it was – if they weren’t so obsessed with chasing an impossible high and toying with people none of this would have happened, yet they also might have never found each other in the first place.

Kim puts it perfectly – “Apart, we’re okay. But together we’re poison” – a damning statement that defined their entire relationship in the most heartbreaking way possible. Kim could have had everything, but she found something better in Jimmy and the character traits he awakened within her. She was done with being the perfect lawyer, done with following the path of those who wanted nothing more than to demean her in spite of progress. But her love for Jimmy was so inscrutable that she couldn’t see herself falling apart, resorting to depths so depraved that she couldn’t see how far they'd gone before it was too late. Howard’s death was a wake-up call, even if she needed to tell one more lie before moving on for good. Bob Odenkirk and Rhea Seehorn’s performances in this scene are immaculate, perfectly capturing the collective loss of Howard, their romance, and the lives they’d built together. In one day, it had all fallen apart with no way of piecing it back together. Jimmy glancing at the spot where Howard’s corpse once lay, trying in vain to reason with himself that somehow things could be repaired, is a chokehold of emotion, an inevitable conclusion all of us had been waiting for but simultaneously weren’t ready for.

Kim returns to her bedroom and continues to pack, and we flash forward into the future, cementing the fact we’re now in the Breaking Bad timeline and leaving the past behind for good. Kim is gone, presumably moving somewhere far away. But Saul Goodman is here to stay as he sleeps with sex workers in his gaudy mansion while ordering around assistants and making business calls while in the shower. It’s the man we hate to love and love to hate. We’re in extended epilogue territory now, and I cannot wait to see how Better Call Saul continues the relationship between Jimmy and Kim even as the ashes begin to gather.

Anything can happen, which is a statement no prequel should have the right to express, but Peter Gould and Vince Gilligan have crafted such a masterpiece here that I actually believe it. I think what I appreciate most is that Kim’s departure wasn’t one of bloodshed, but of eventual heartbreak as she walked away before things could get any worse. Knowing that somehow, someway, it could have been salvaged only makes it that much harder to accept.