Astro’s Playroom is a charming adventure that takes you through Sony’s best moments in history while serving as a tutorial for the DualSense controller. Developed by Japan Studio’s Team Asobi, Astro’s Playroom comes preloaded on every PlayStation 5 console and acts as a sequel to Astro Bot Rescue Mission.

There are four main areas for Astro to explore: Cooling Springs, SSD Speedway, GPU Jungle, and Memory Meadow. Within each main room, there are four sub-levels with a few requiring Astro to operate a particular suit. Each sub-level has four puzzle pieces and two PlayStation artifacts to collect for your trophy case in the PlayStation Labo. Throughout this guide, we’ll take a look at where to find all the hidden collectibles in Cooling Springs. 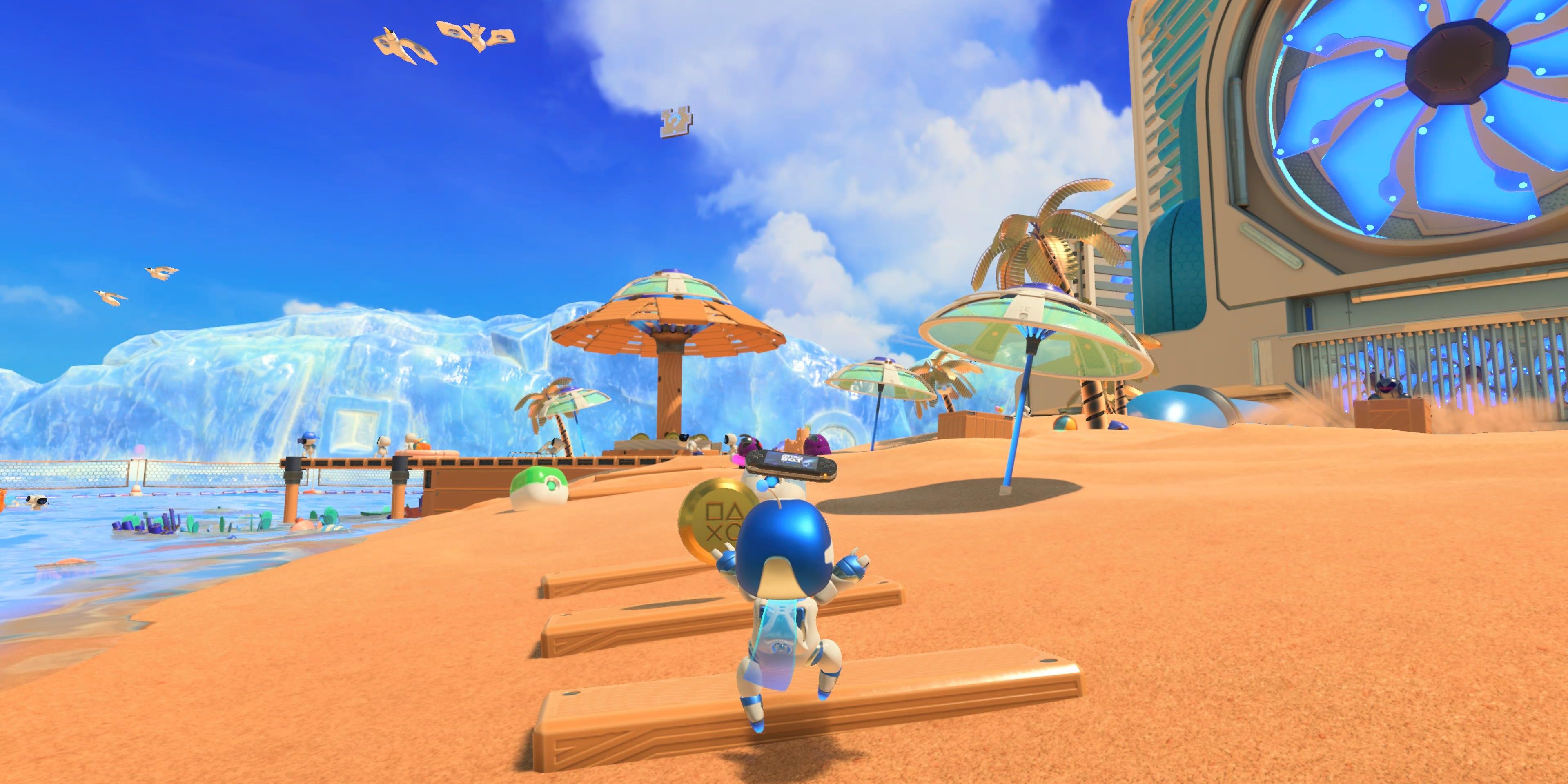 Jump down the slide to gracefully dive into the ocean and swim up to the beach. Immediately head left and follow the trail of coins. Defeat the purple enemies wearing the swim rafts building the sandcastle.

You’ll see a giant umbrella tree with two other Astros playing and a ring of coins. Collect the coins then jump on the surrounding umbrellas to boost yourself to the bigger umbrella. Use the springs to leap in the air to collect the first puzzle piece. 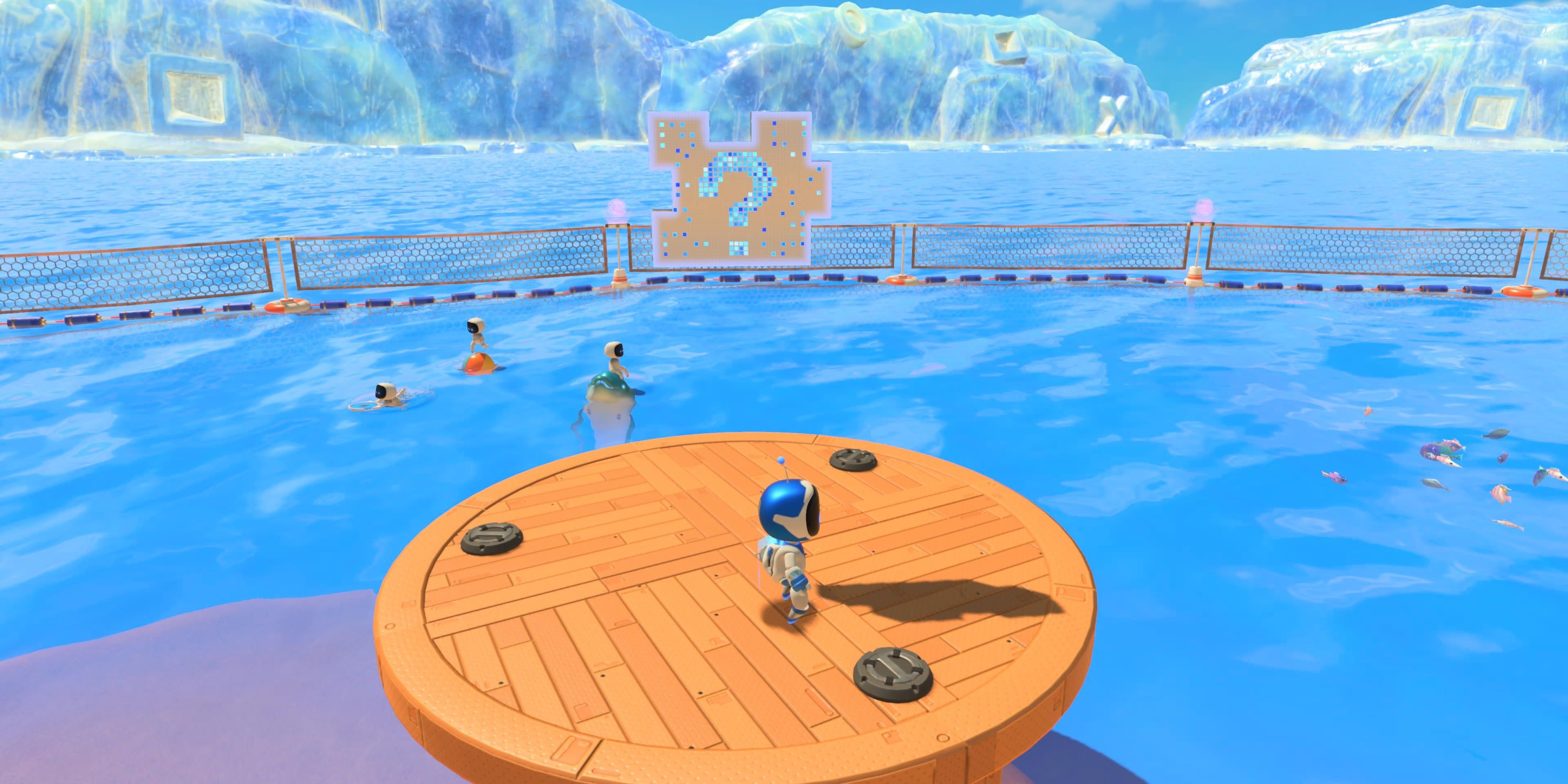 Double back to where you washed ashore on the beach and head toward the pier on the right of the checkpoint. If you stray too far toward the left, a few enemies might detect you and attack.

Follow the trail of coins to the end and use Astro’s laser feet to hover onto the platform. Pull up the three cords to collect the coins and reveal the hidden puzzle piece floating above. 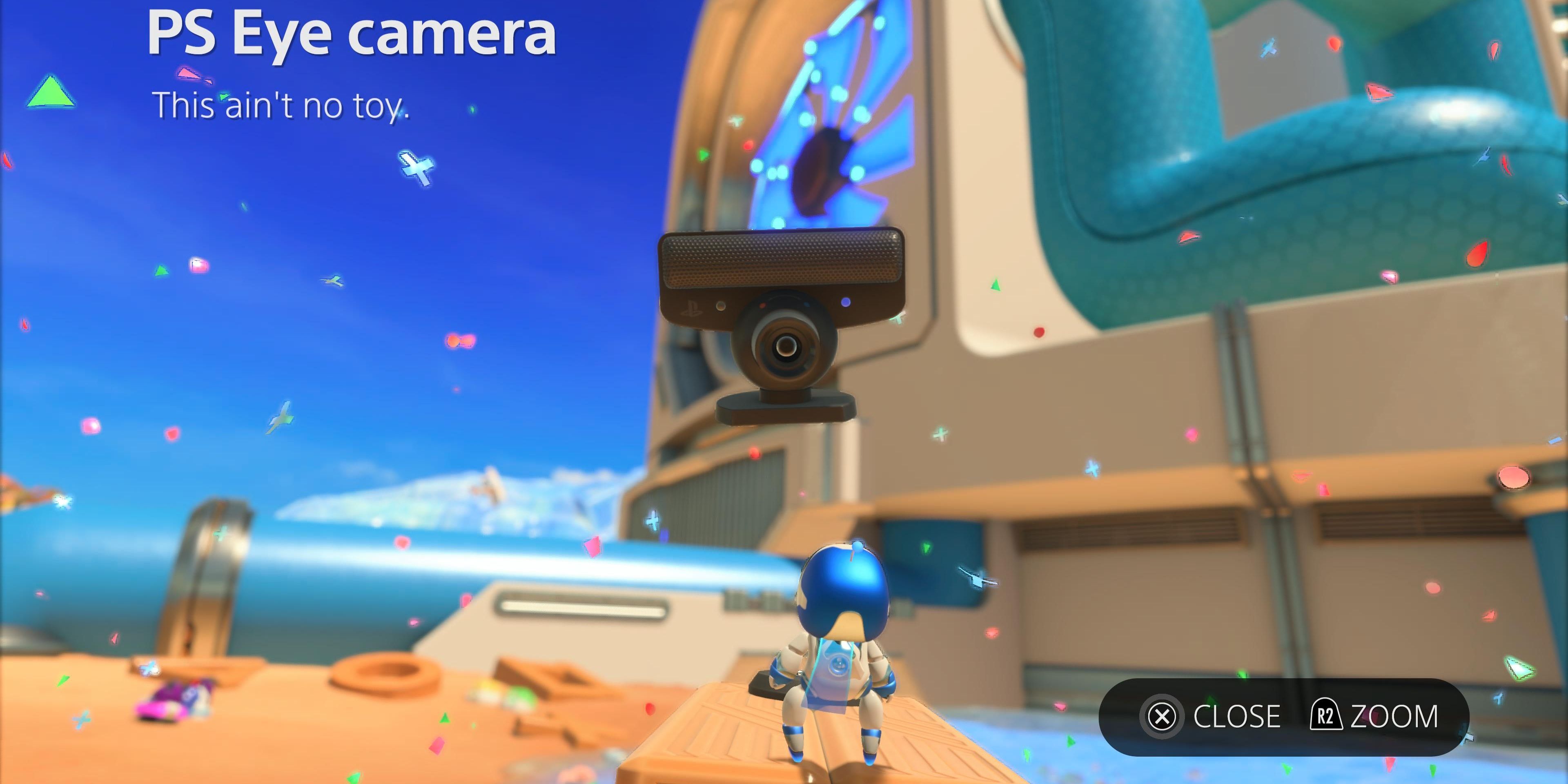 Continue walking along the right-hand side of the beach, destroying the two purple enemies playing in the sand. Punch the spiked enemy and then wait for the electric foe to slam its head and pull the cords to yank it from the ground.

After defeating the electric enemy, jump across the platforms on the water. Be careful to time the jumps properly, because it's easy to fall into the water. The last platform will have some exposed wires that are hiding the PS Eye Camera. 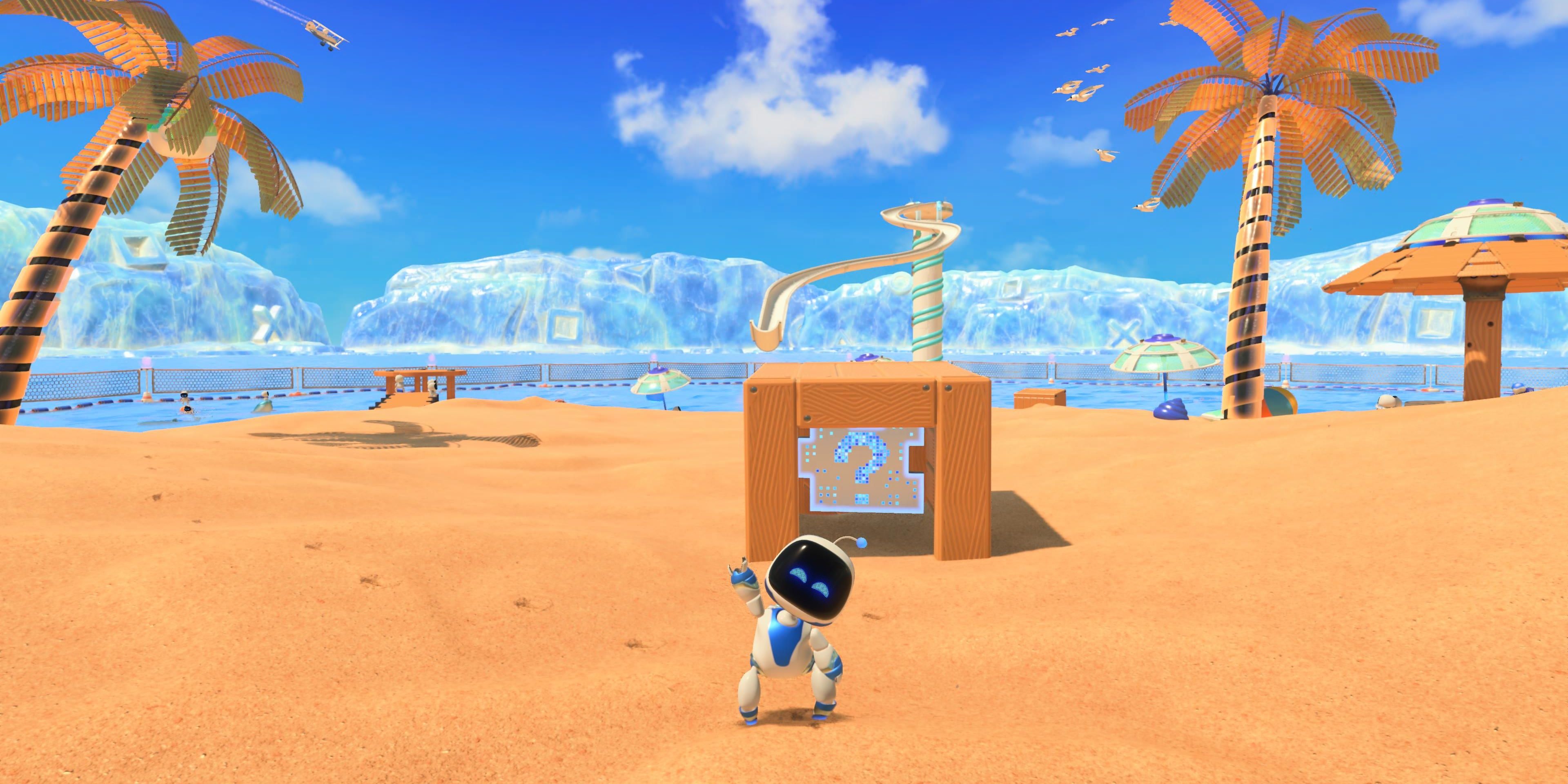 From the starting checkpoint, walk straight toward the blistering sand winds. You’ll see a wooden box directly in the middle of the beach.

Be careful not to attract attention from nearby enemies, turn around, and you’ll find an opening in the box. The third puzzle piece will be nestled safely inside. 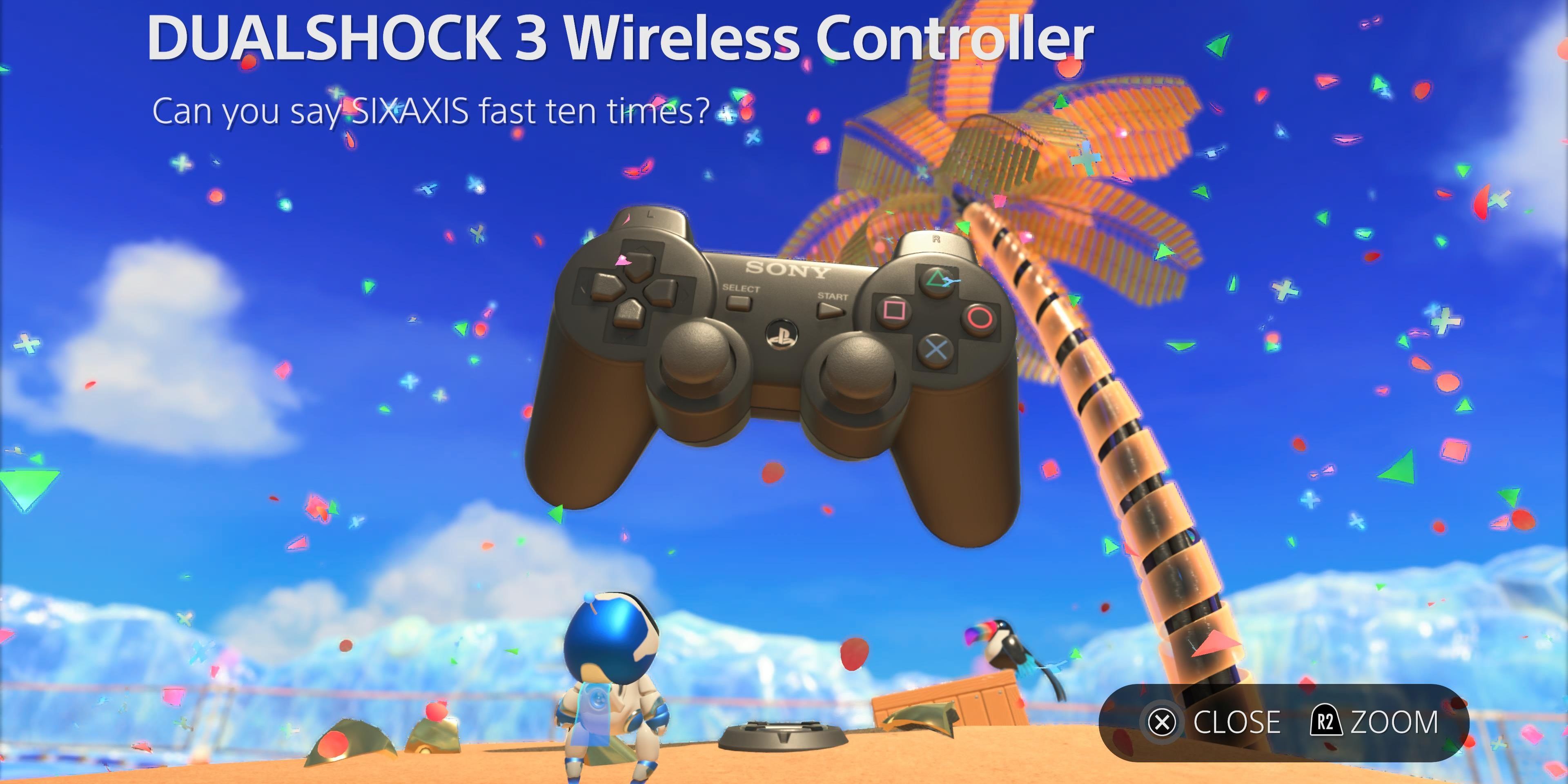 Near the area where you found the puzzle piece above the umbrella, you’ll see a smallish island with a single palm tree. There will be three spiked enemies patrolling the area with a tucan perched on a box.

Carefully time your punches against the enemies, because their spikes will instantly kill Astro. Punch away the enemies and pull up the cords to obtain the Dualshock 3 Wireless Controller artifact. 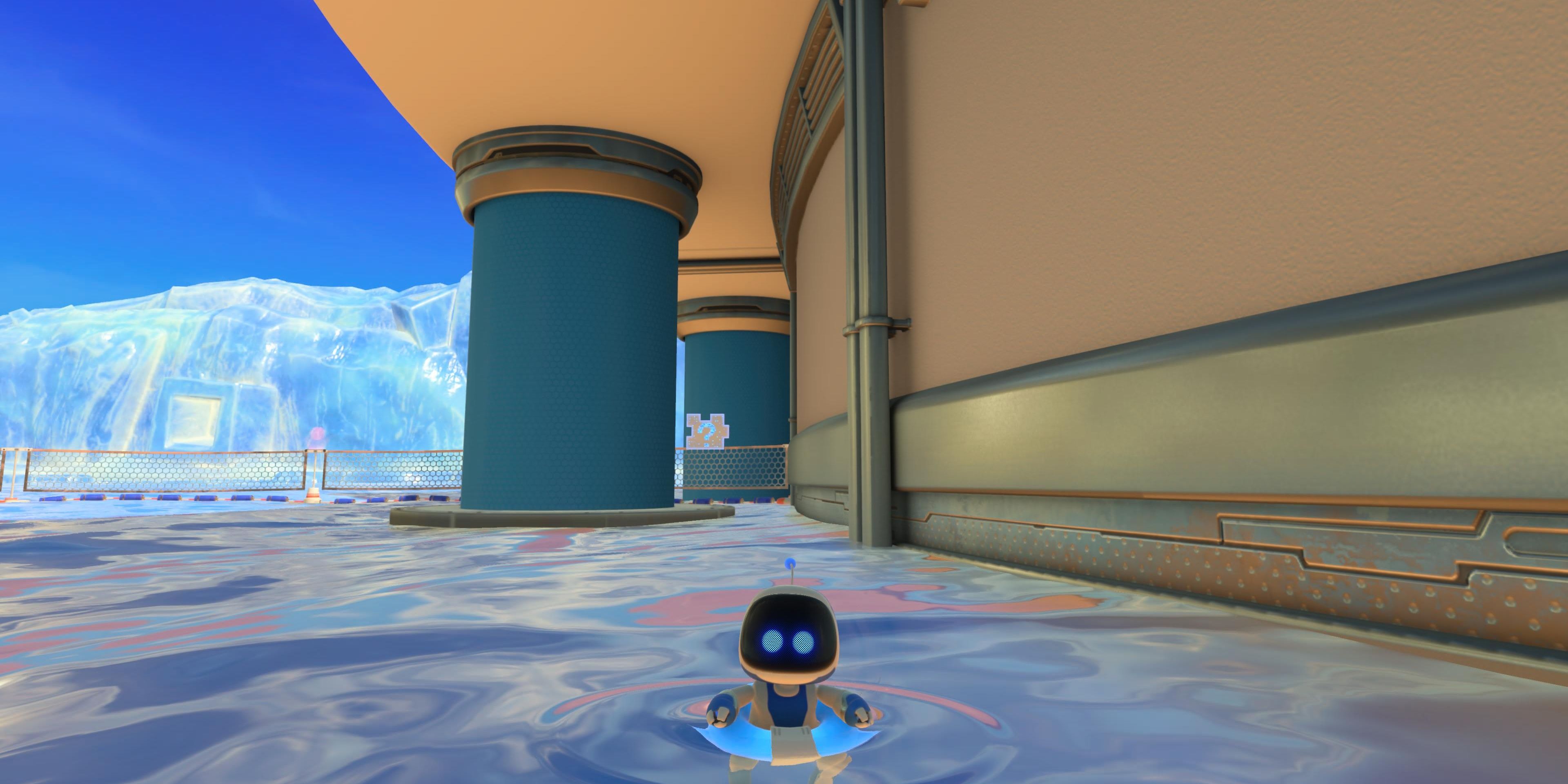 Turn around from the little island with the tucan and walk past the giant Astro blob. Continue heading alongside the water structure, and you'll see some cables to pull that will reveal a line of coins to collect.

There will be an Astro playing in the water and another fishing on a controller floaty to the left of you. Keep heading around the side and start swimming toward the platform around the pillar and you’ll find the fourth and final puzzle piece. 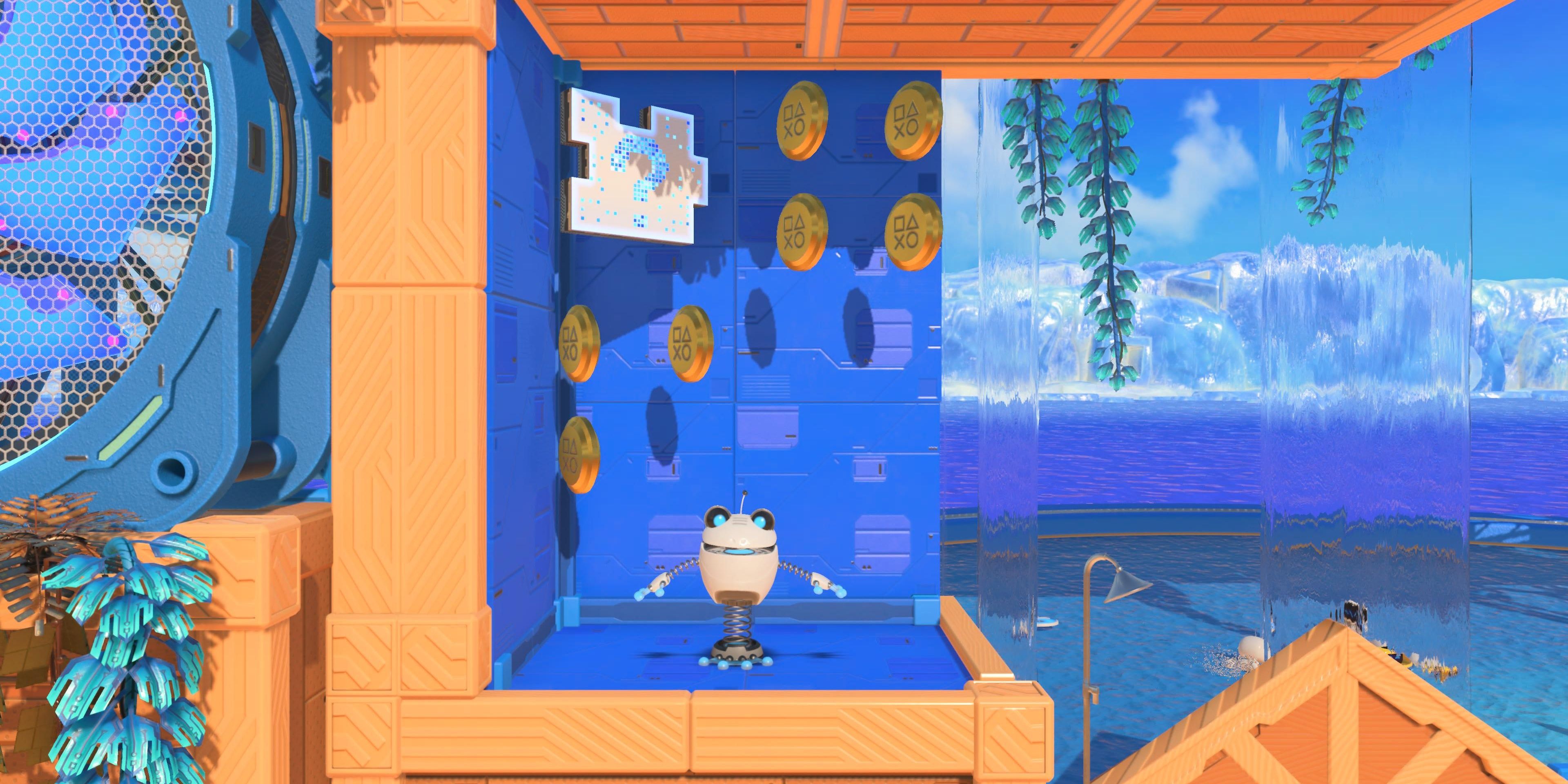 Once you've finished collecting everything in Bot Beach, walk through the sand storm and pull the cords to open the door. Hop across the lily pads in the indoor pool area to obtain the frog suit to navigate through Springy Spa.

You must use the left and right triggers to launch yourself in the suit. After the platform rises, hop to the left and break the glass wall. The first puzzle piece will be hidden inside with a batch of coins. 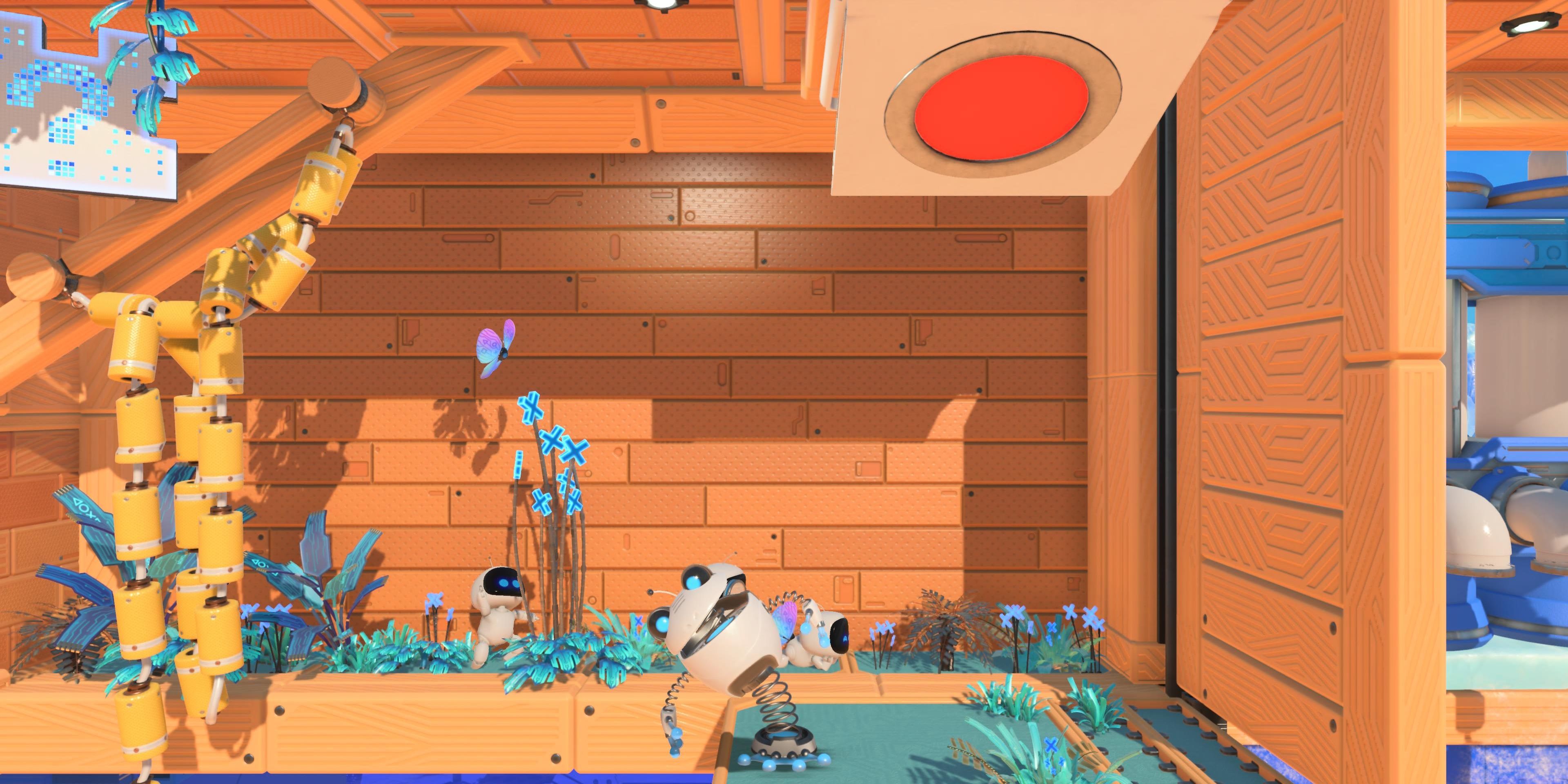 Continue hopping your way up through the spa. You’ll jump on a red button that’ll activate ascending platforms that will take you to another red button.

Hop on that button to bring out outside platforms to jump on to climb higher in the level. Before hitting the red button on the ceiling, leap to your left to grab the second puzzle piece. 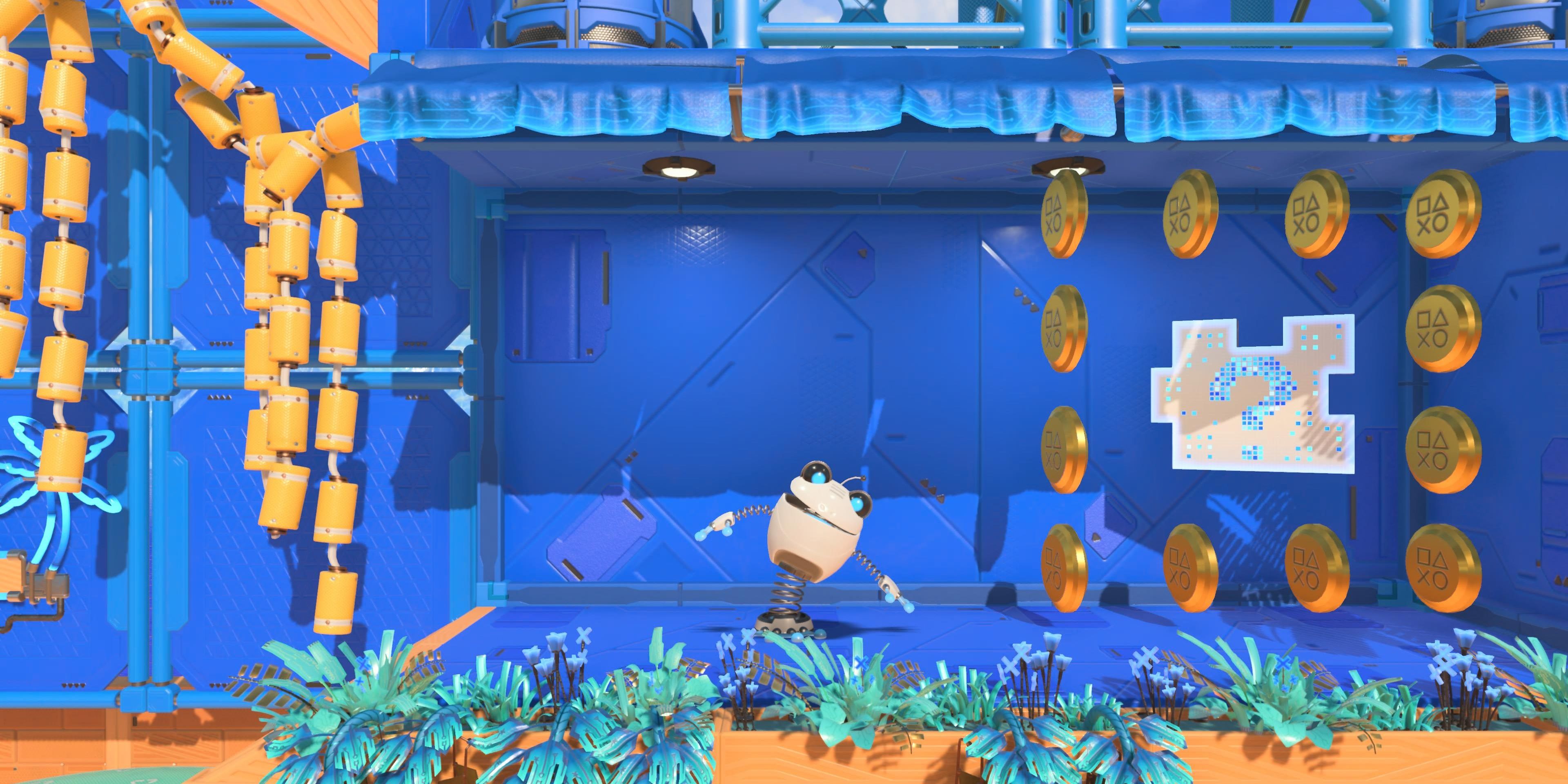 Double back and hit the red button on the ceiling to open the next area. Jump across the frozen water and the last lily pad will rise to take you to the next area.

Instead of continuing down the main path to the left, break through the glass barrier on the right. You’ll find the third puzzle piece floating in the middle of some coins. 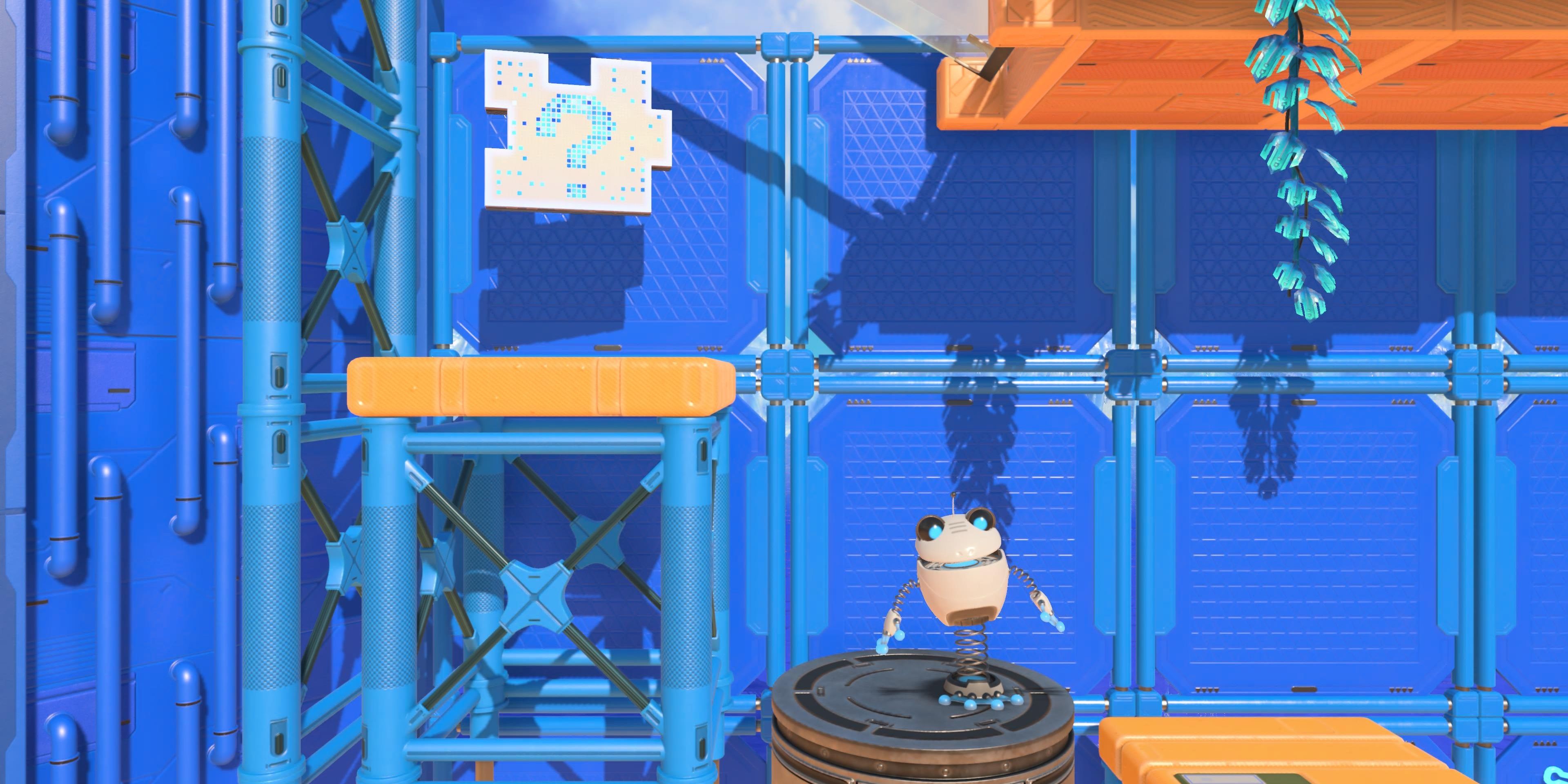 Head back the way you came and leap down the left path. You’ll need to hop on the silver metal buttons to activate the platforms to rise.

Once the platforms have risen, hop across until you reach the end. The fourth puzzle piece will be floating in the air waiting to be claimed. 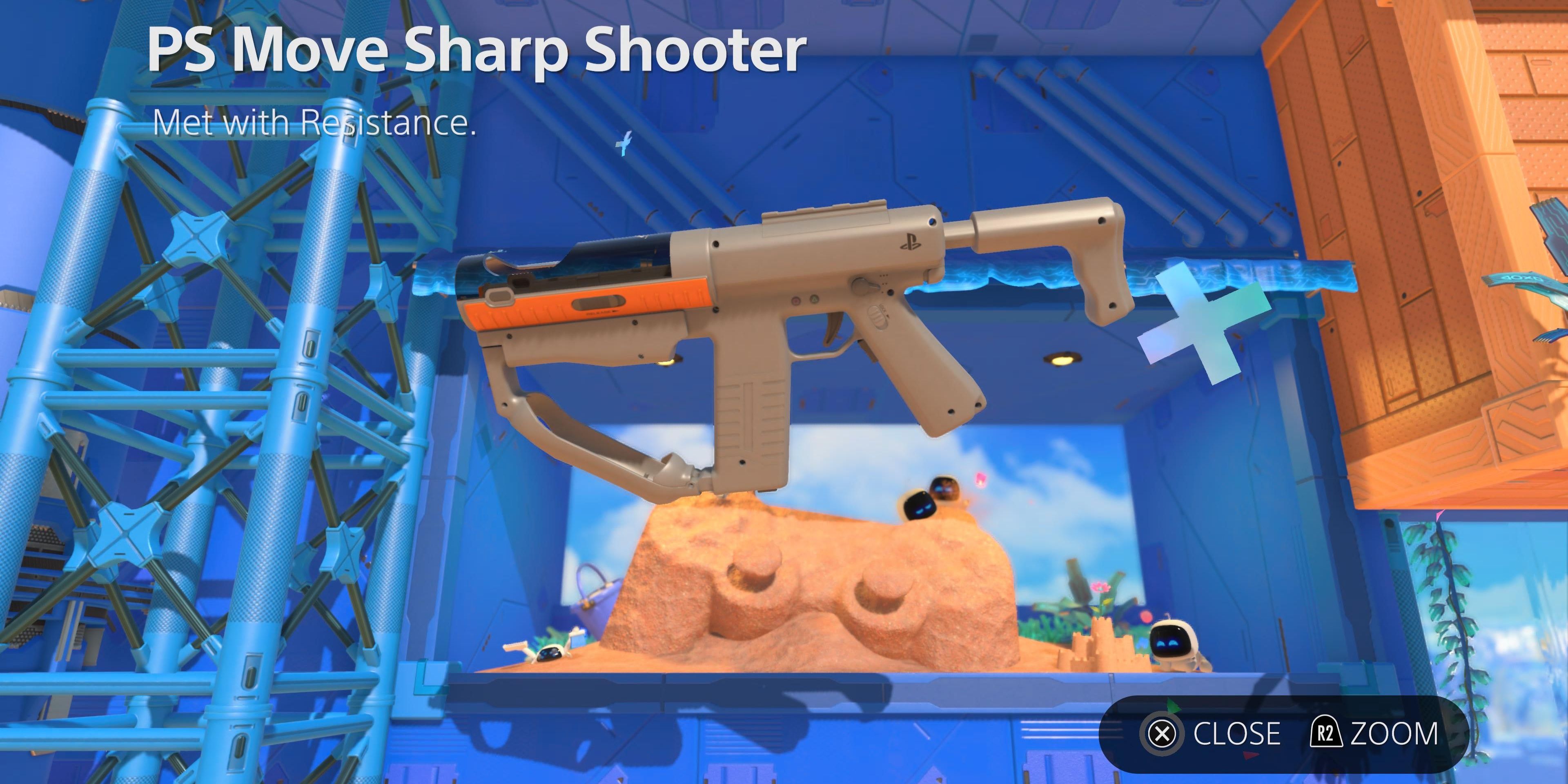 Smash through the glass barriers to continue making your way through the spa. Instead of following the arrow pointing right, hop on the platform to the left.

Breakthrough another glass barrier to find a line of coins descending into a colorful wooden box. Jump in the box and once it closes, jump back out to break it and claim the PS Move Sharp Shooter artifact. 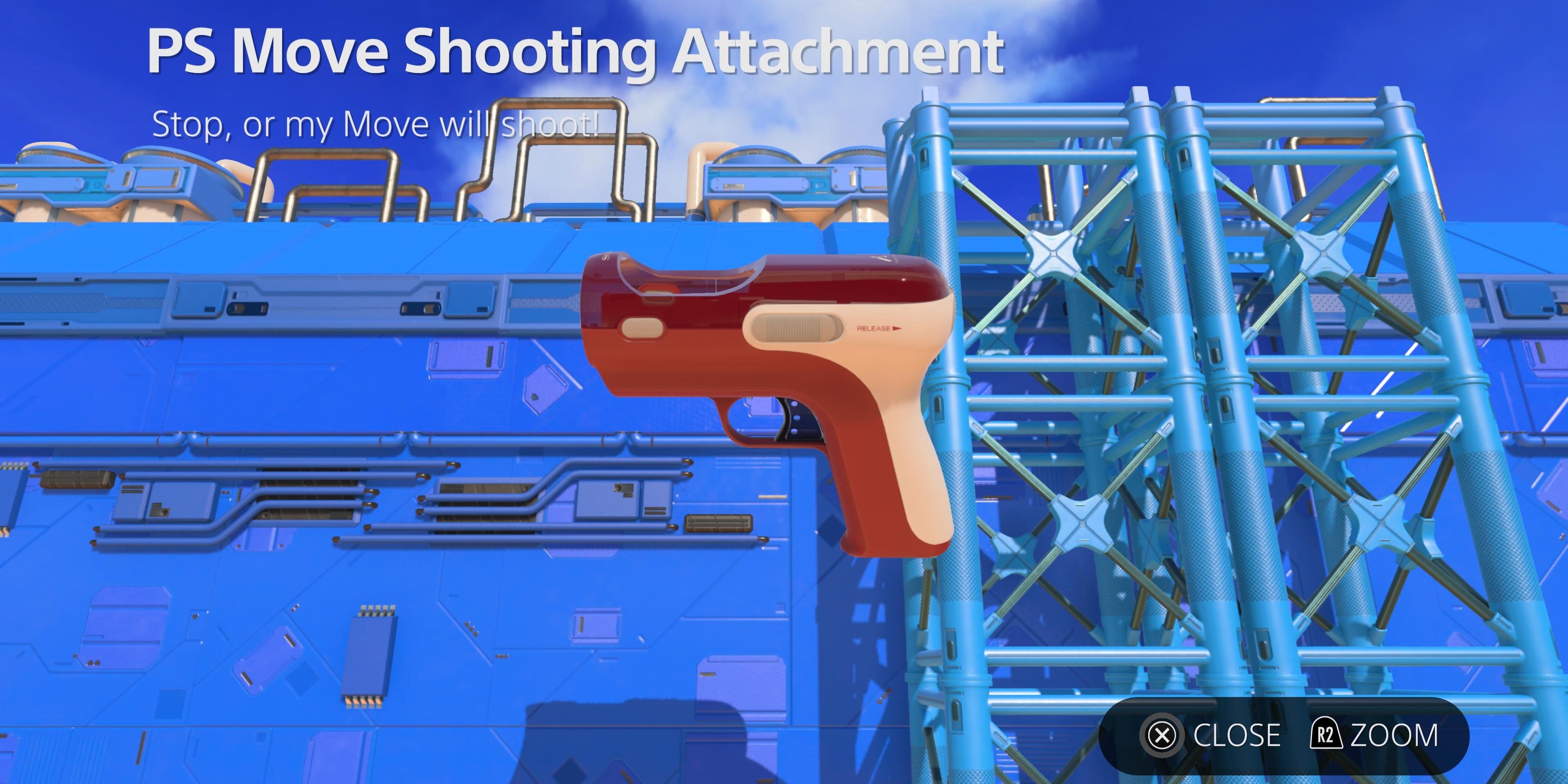 Head down the right path until you reach another rising platform. In this new area, there will be moving platforms that rise and descend in specific patterns.

Keep hopping toward the right of the area until you see a platform that’s going up and down in a straight line. Jump onto that platform to find the PS Move Shooting Attachment artifact. 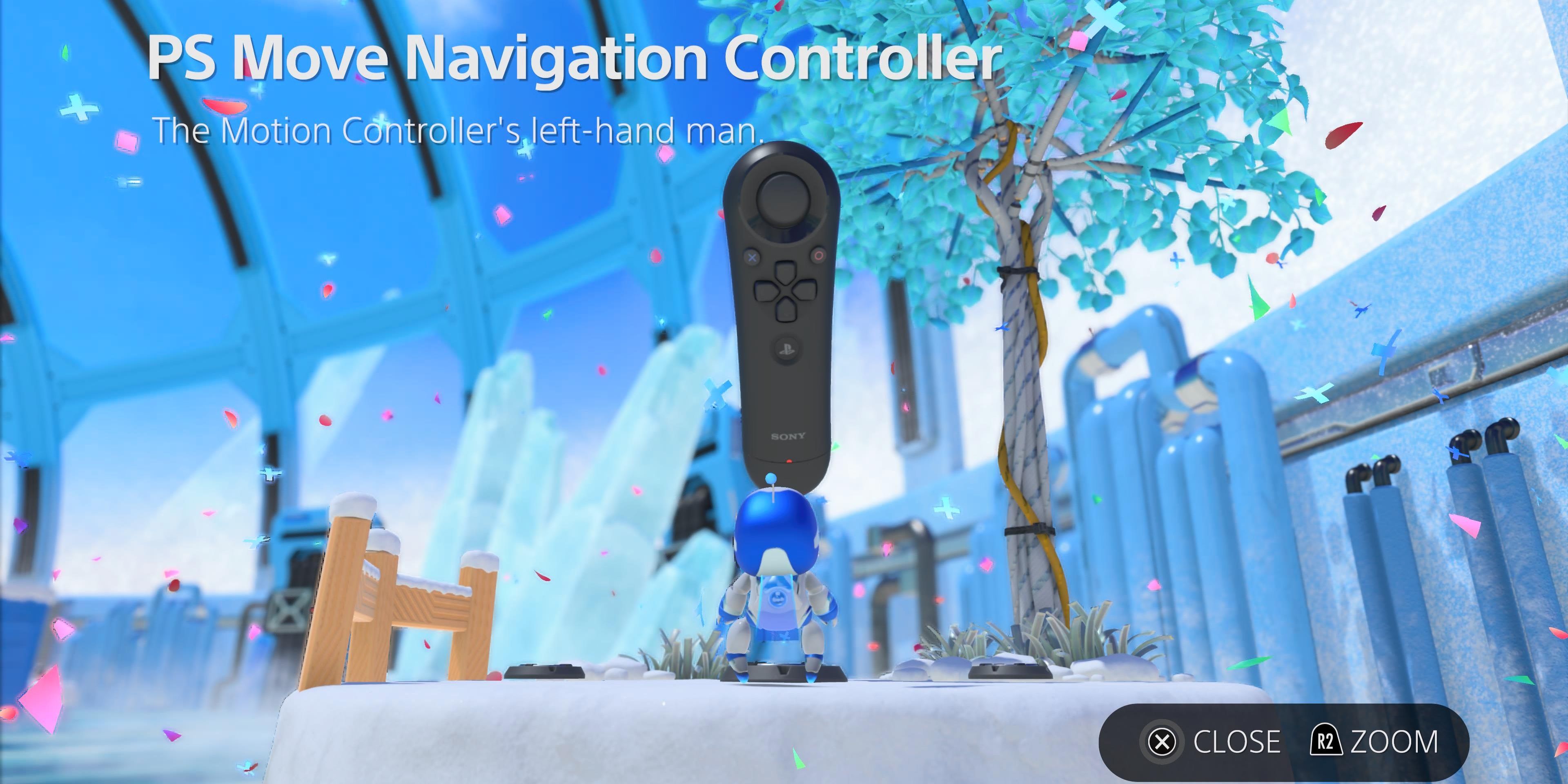 Once you enter the new snowy area, turn right toward the three coin boxes and exposed wires. Pull up the cables to equip the capsule and throw it at the platform in the air.

It’ll fall into the water below, allowing you to jump across to the little island with the three exposed wires. Pull up the wires to collect the coins and reveal another set of exposed wires to pull. Yank them from the ground to claim the PS Move Navigation Controller artifact. 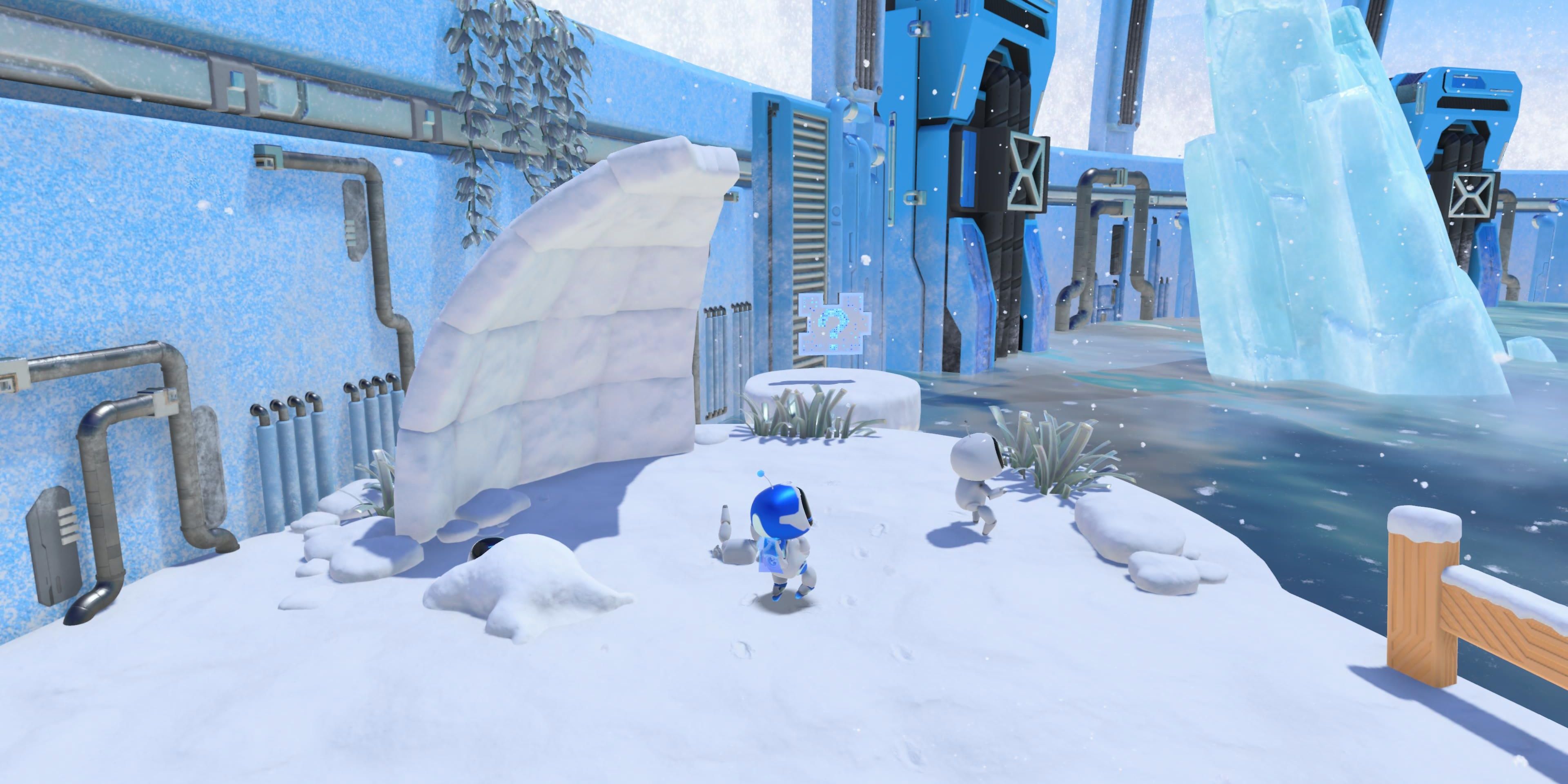 Jump back across to the starting area and you’ll see half an igloo with a coin box inside. Destroy the igloo by either punching it or using the capsules for some extra fun.

You’ll find the first puzzle piece hidden behind it on a small platform. Technically, you don’t have to destroy the igloo; the snow path is wide enough for you to walk across. 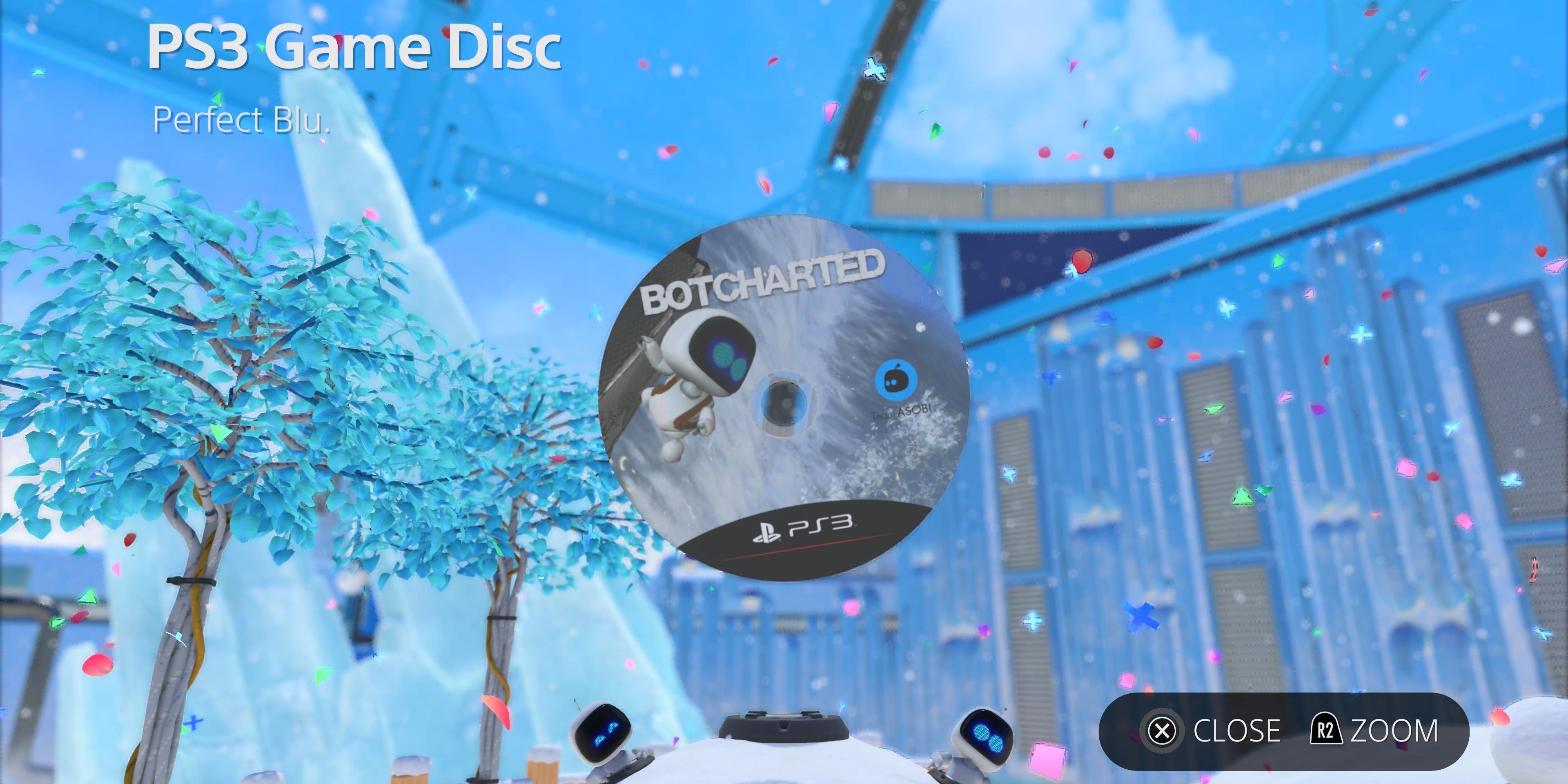 Make your way toward the center area by skating across the ice path. Astro's movement is a bit more sensistive on the ice, so be careful not to fall off the edge.

A pair of spike enemies will leap toward you from underneath the platform. Swiftly knock them aside and skate to the left across the PlayStation ice symbols. Kill the two enemies that emerge from the snow pile and pull up the wires to receive the PS3 Game Disc artifact. 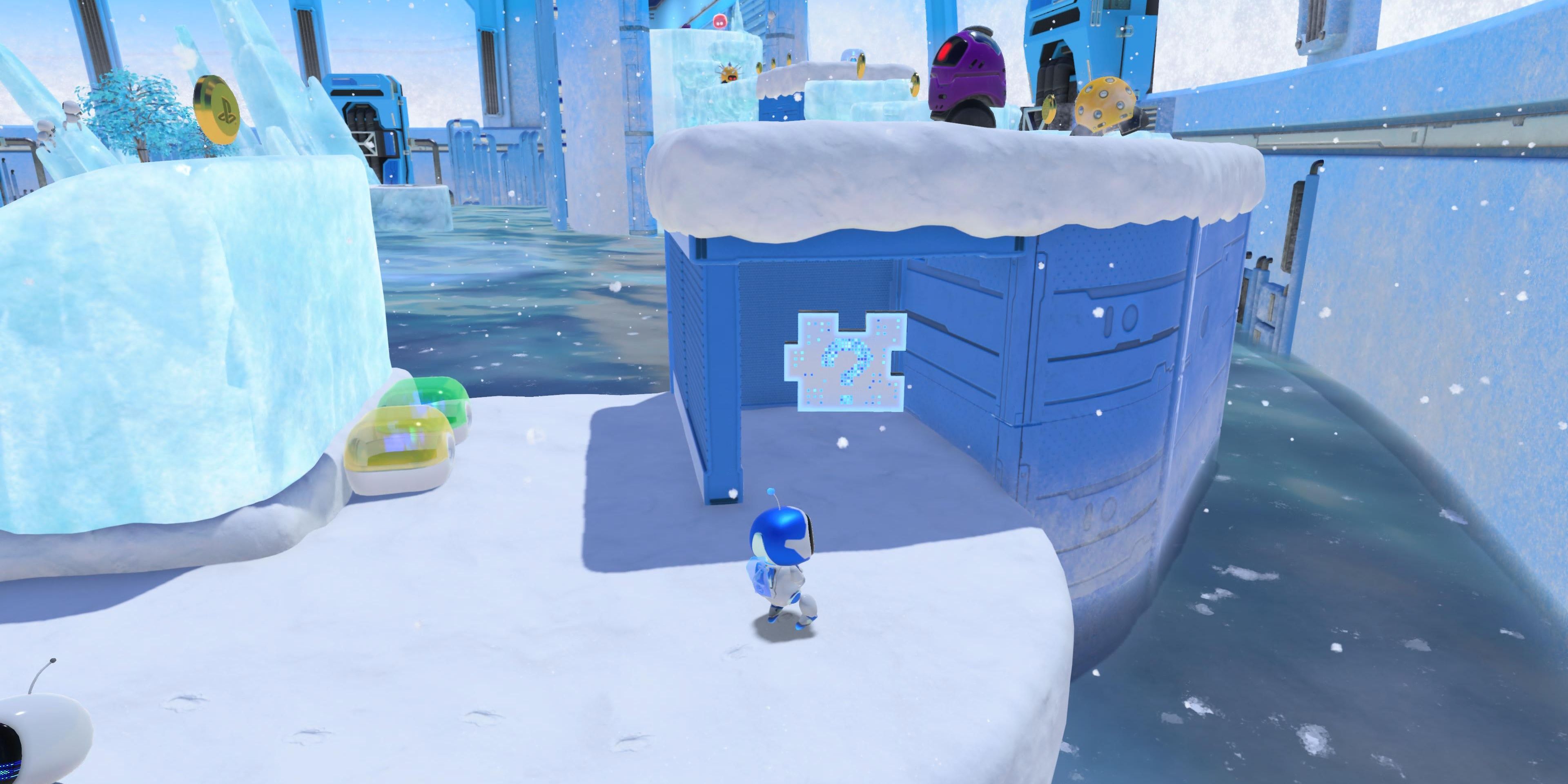 Break the glass over the trampoline to return to the center ice platform. Head up the snowy steps and defeat the enemies on patrol. There will be an electric enemy that will burst from the snow. Wait until it slams its head on the ground and then grab the wires to kill him.

After reaching the checkpoint, drop down to the right instead of sliding down the ice slope. Hidden underneath the platform is an opening that has the second puzzle piece. 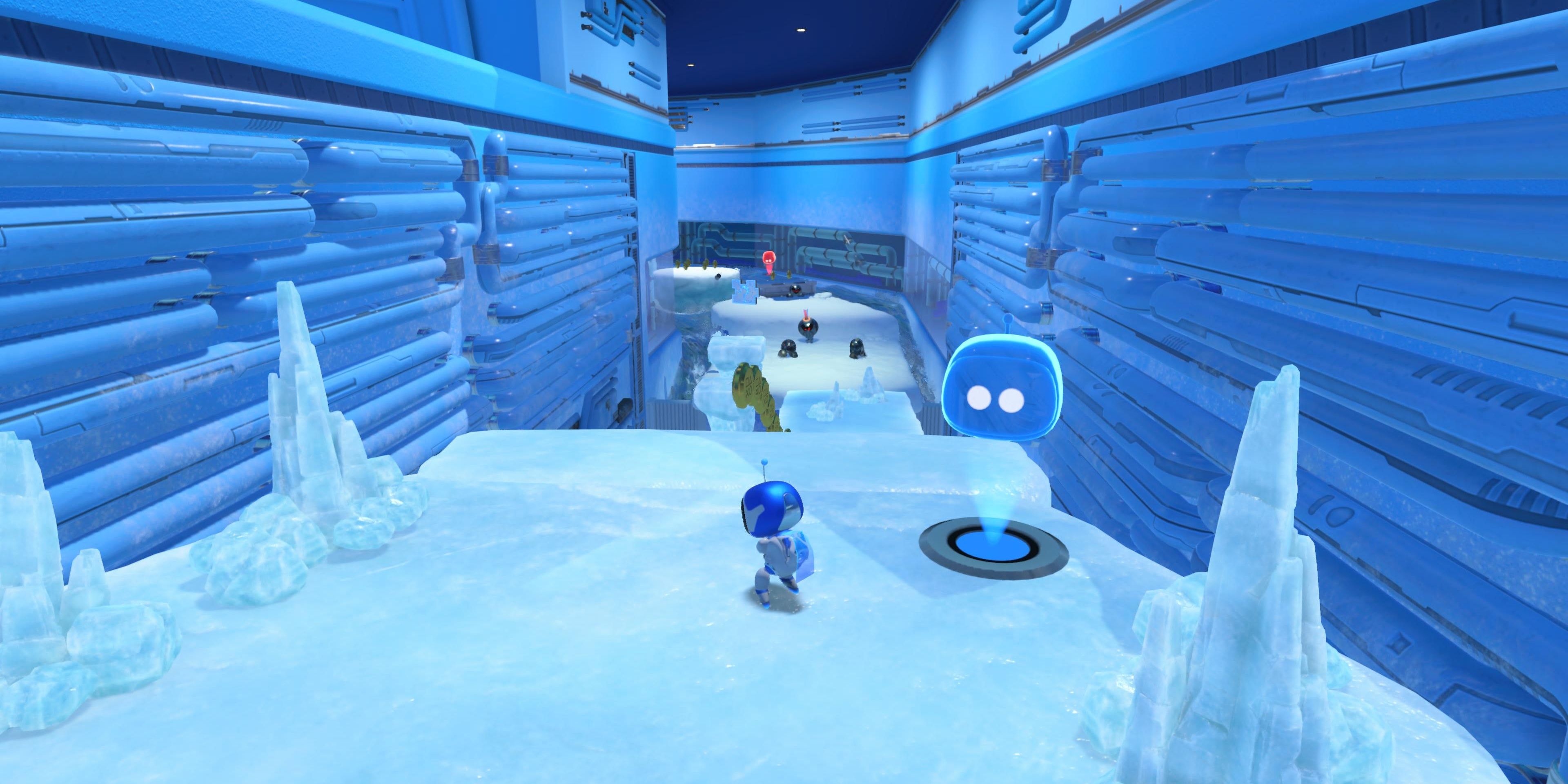 Climb back up to the top of the ice ramp and slide down to reach the next platform. Defeat the two enemies on the other side and jump across the ice pillars quickly, because they will break and collapse if you stand them for too long.

Knock away the spiked enemy and reach the next checkpoint. Slide down the next ice ramp but angle yourself to the left and jump on the ice pillar. You’ll find the third puzzle piece on the second pillar. 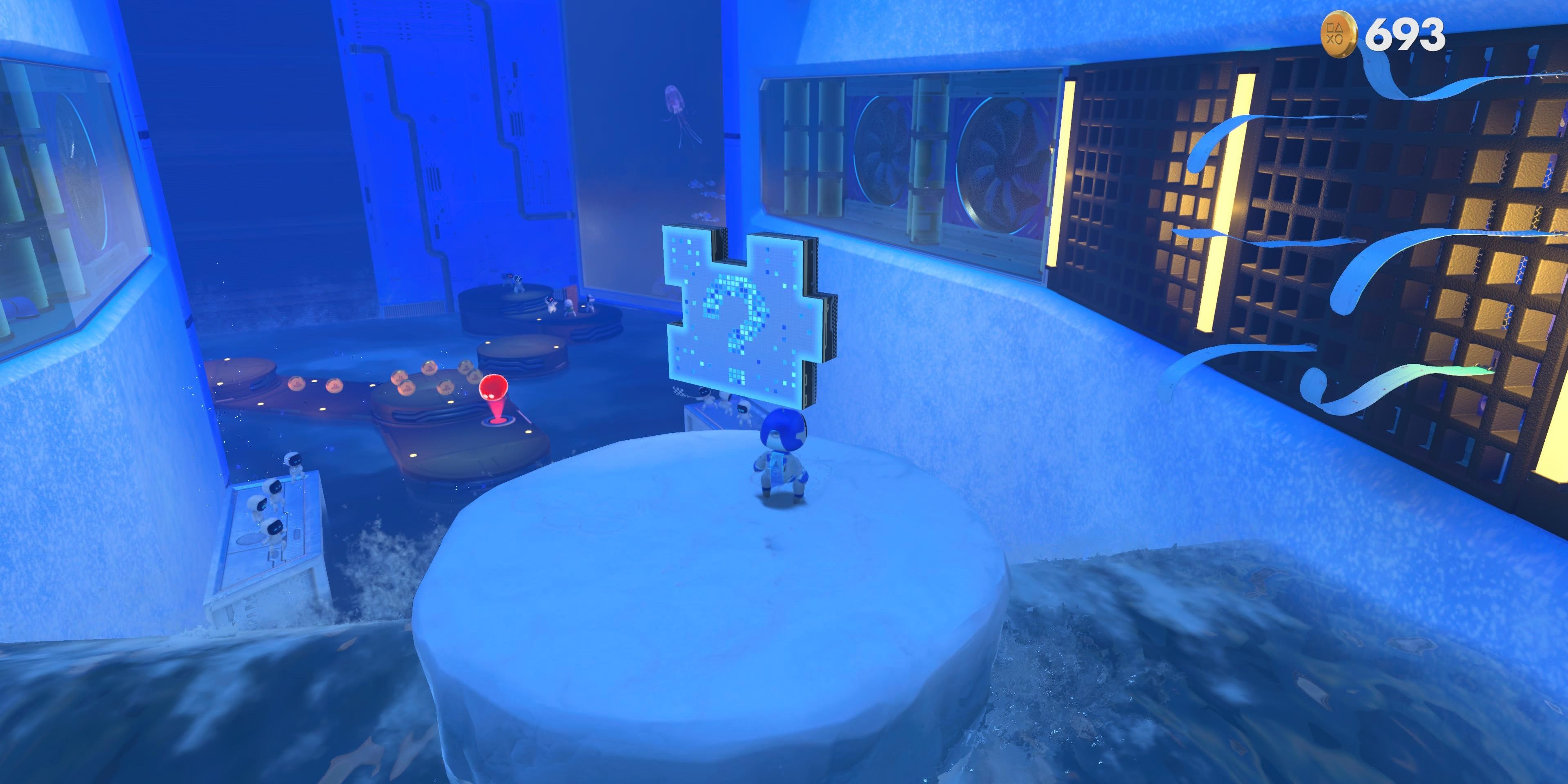 When you reach the next checkpoint, jump on the pile of snow and blow into the controller to start the propeller. Enemies will pop up from the water, so be careful trying to fight them off.

The snow pile will begin to disintegrate, so you’ll need to jump to the other snow pile on the right. The fourth puzzle piece is to be in line with the second snow pile before heading over the waterfall. 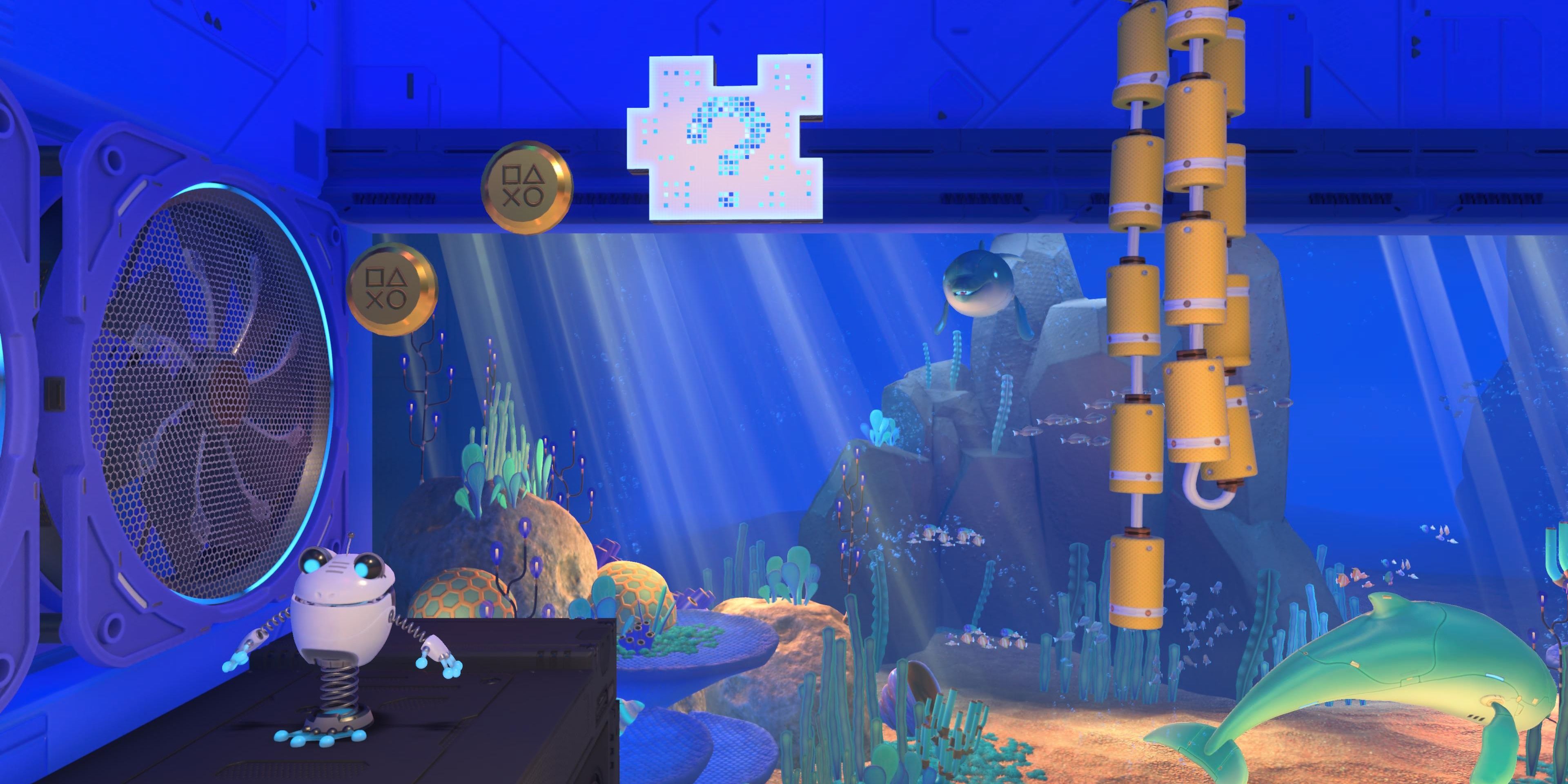 After finishing Frigid Floes, you’ll be back in the jumping frog suit. Hop to the left and jump on the silver button to activate rising platforms. 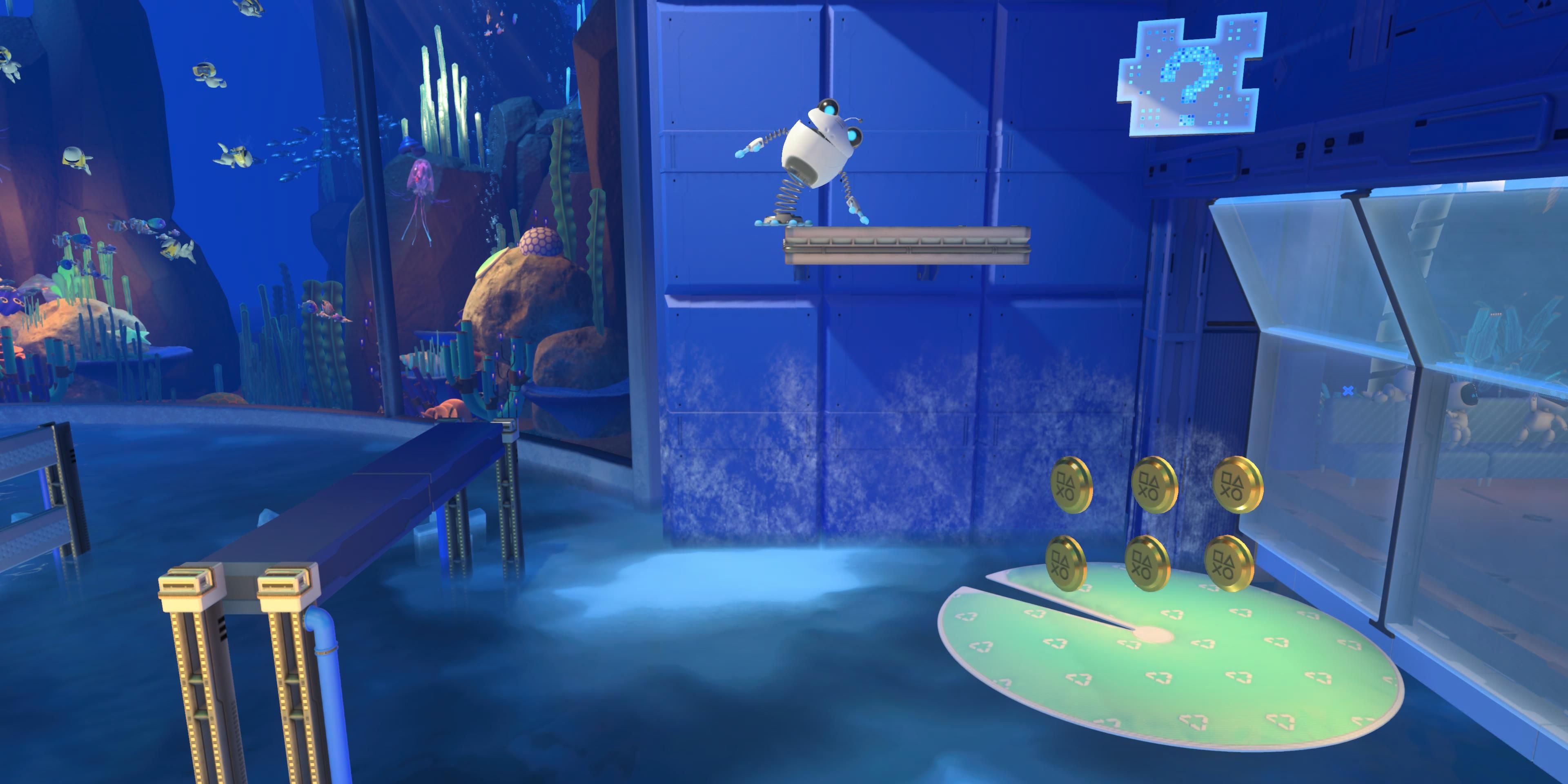 Head down the right hall and jump on the red button to open the door. Hop on the lilypad to start moving along the icy water. You’ll have to jump over the structures coming out of the water.

As you near the end, jump onto one of the structures, and you’ll see another higher platform. Leap onto that, and you’ll find the second puzzle piece. 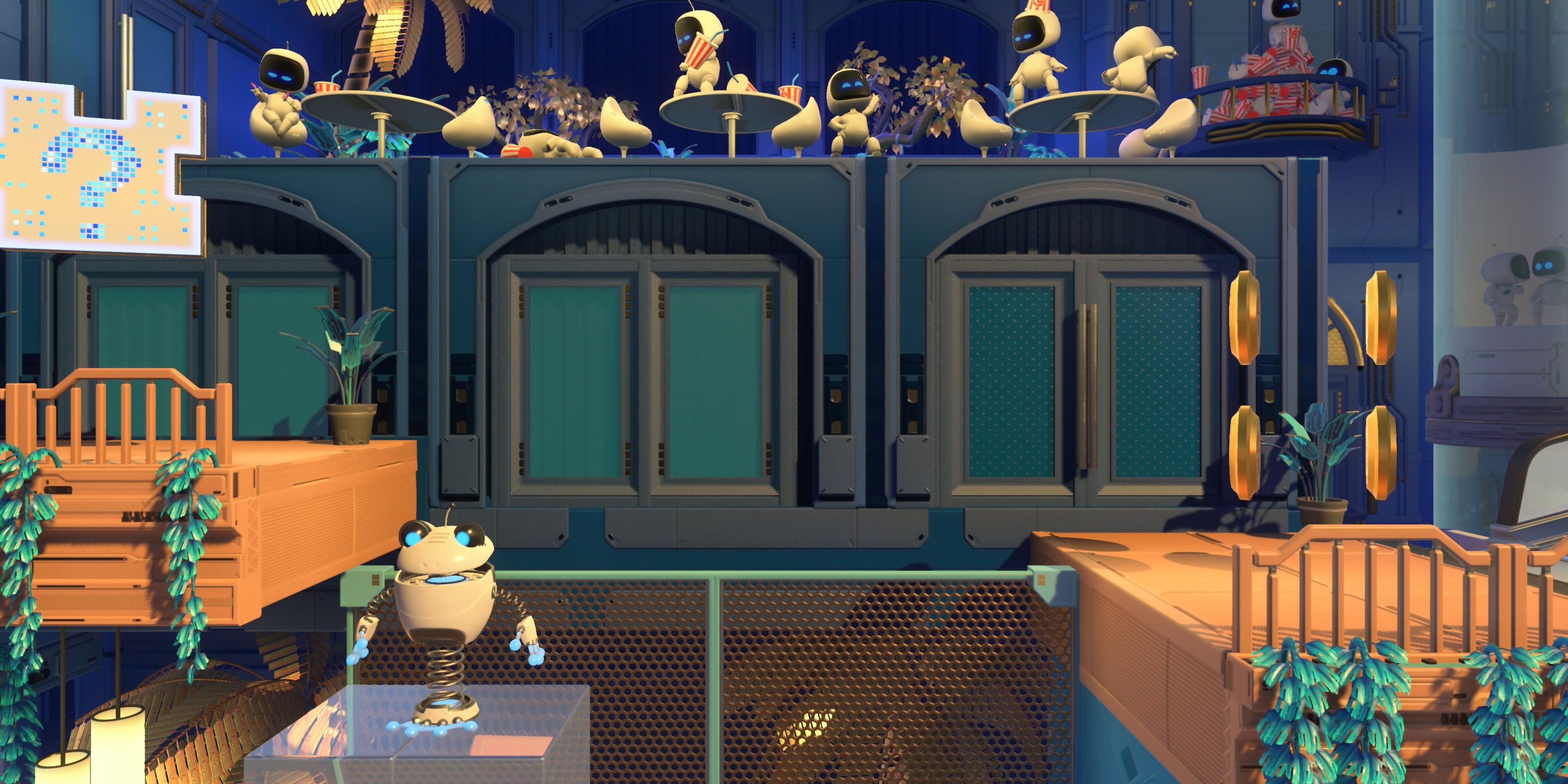 Drop down from the platform back onto the lilypad and jump through the side glass wall, reaching the next checkpoint. There will be tons of glass blocks that you’ll need to break to keep moving upwards.

Use the triggers to launch yourself through the glass blocks to shatter them and clear a path for you to climb upward. When your reach the top, the third puzzle piece will be floating to your left. 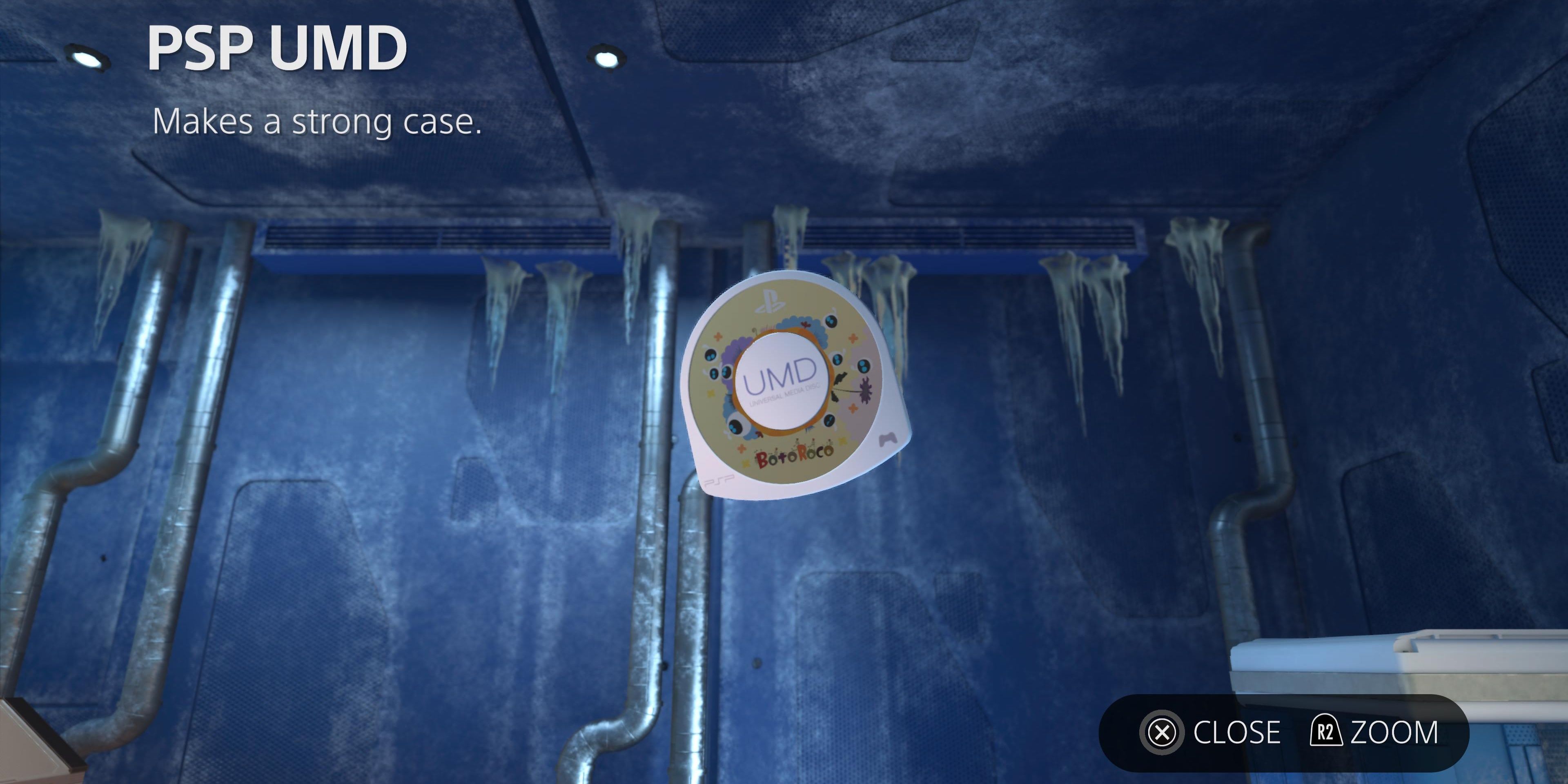 Jump to the other side and continue hopping along the path. There will be an automated belt that will push you back. Jump continuously to advance, and then jump on the lilypad at the end to rise to the next area.

Instead of jumping onto the swinging chandelier to the left, leap through the opening on the right. Leap across the frozen water onto the ice block and hit the red button to lower the water level. Retrieve the PSP UMD artifact at the bottom. 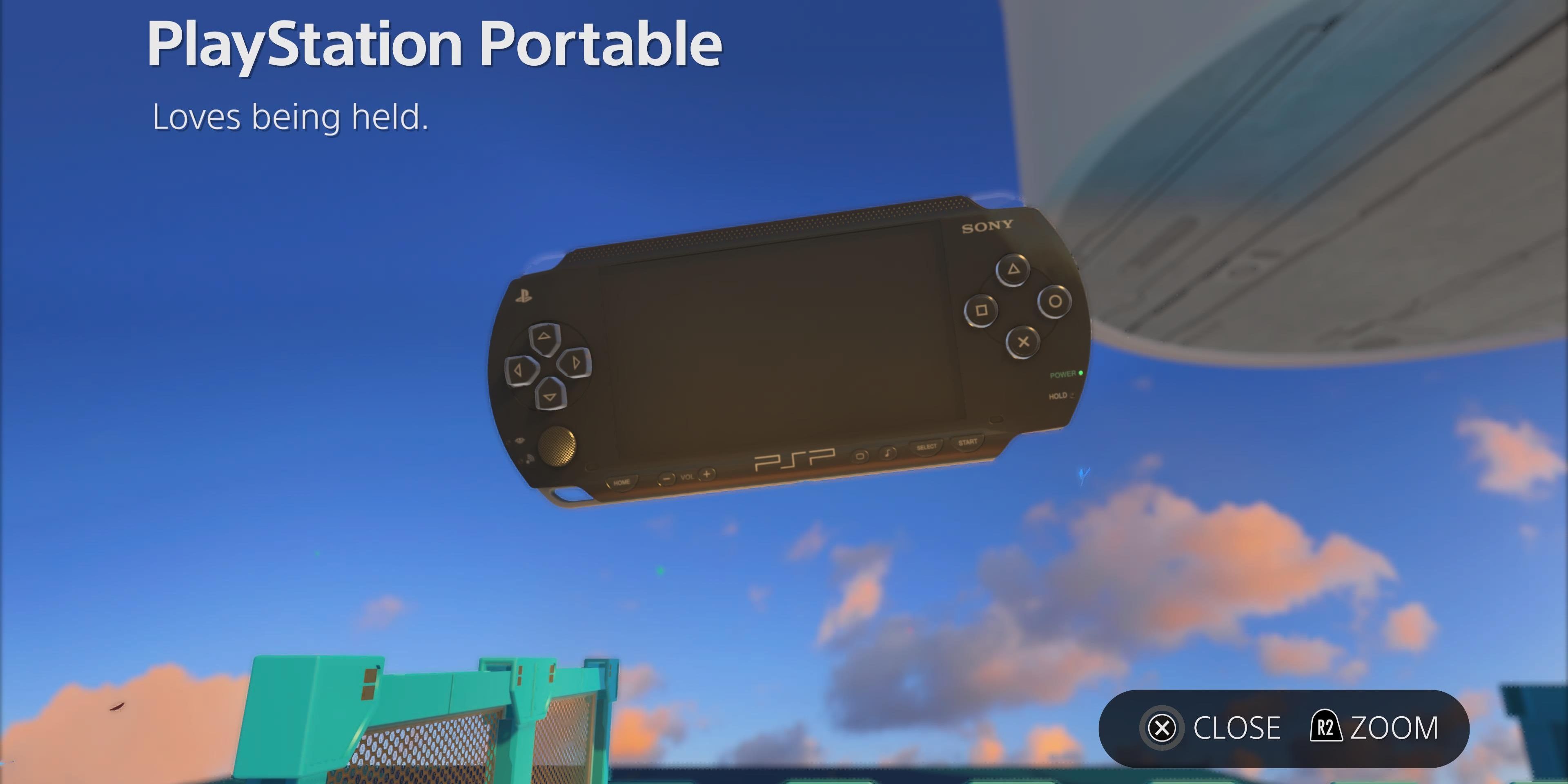 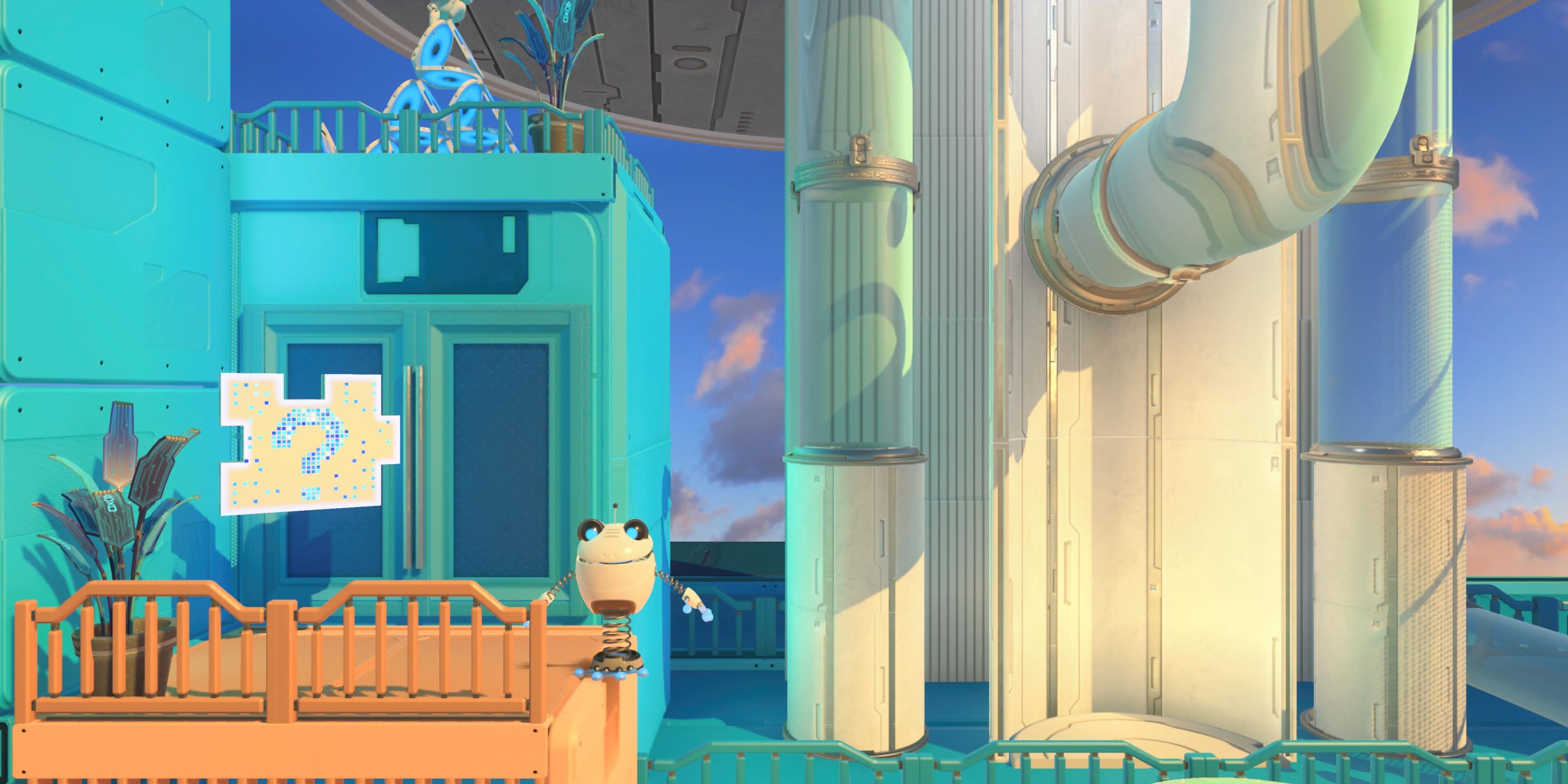 Head back to the red button and jump on it to activate lilypads to jump on. The last one will take you up to a new area.

Before heading to the pad on the right, jump to your left to find a platform off the wall. Jump on top of it to obtain the final piece of Hotel Hopalot. 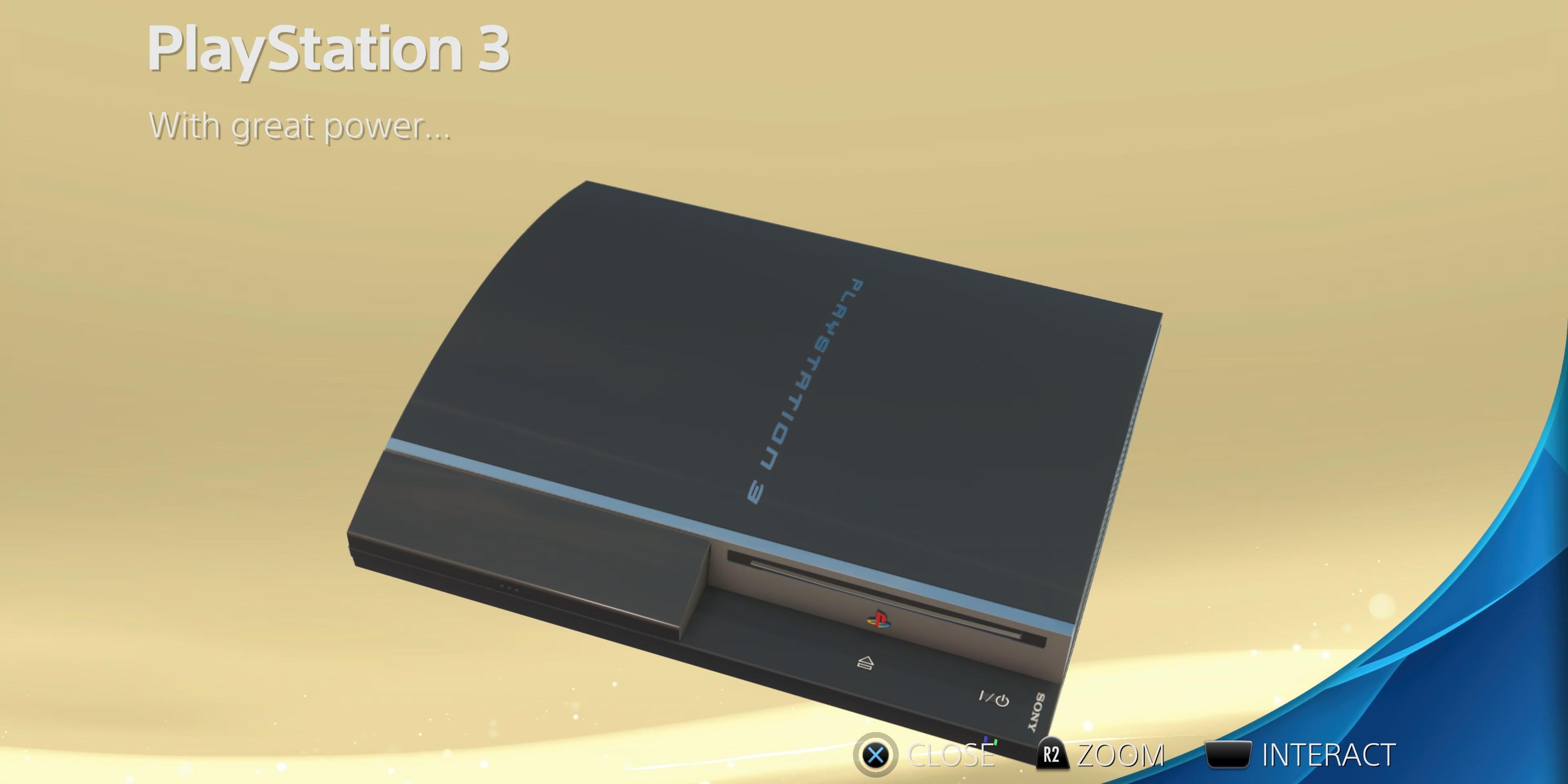 Jump on the angled lilypad on the right wall to reach the center platform. The lilypad will automatically take you up, collecting lines of coins along the way. Astro will pop out of the suit and into the final area.

Make your way across the path over the way to the top platform. Pull up the giant exposed wires to receive the PlayStation 3 artifact for completing Cooling Springs.