You are here:
Home / Assassin’s Creed Origins: How To Unlock The Isu Armor

Assassin’s Creed Origins: How To Unlock The Isu Armor

When playing Assassin’s Creed Origins, you want Bayek to look amazing, which is why so many players seek out the Isu Armor.  None of the armor in the game has any perks or stats, although, this is one of the coolest sets you can acquire. It used to be worn by Isu commanders, which is why Bayek deserves to wear this with pride.

Only the most avid players will be able to add this to their inventory as it takes quite a bit of work to retrieve it. However, the work you put in will be well rewarded as the Isu Armor set is one of the best you can own in Assassin’s Creed Origins! 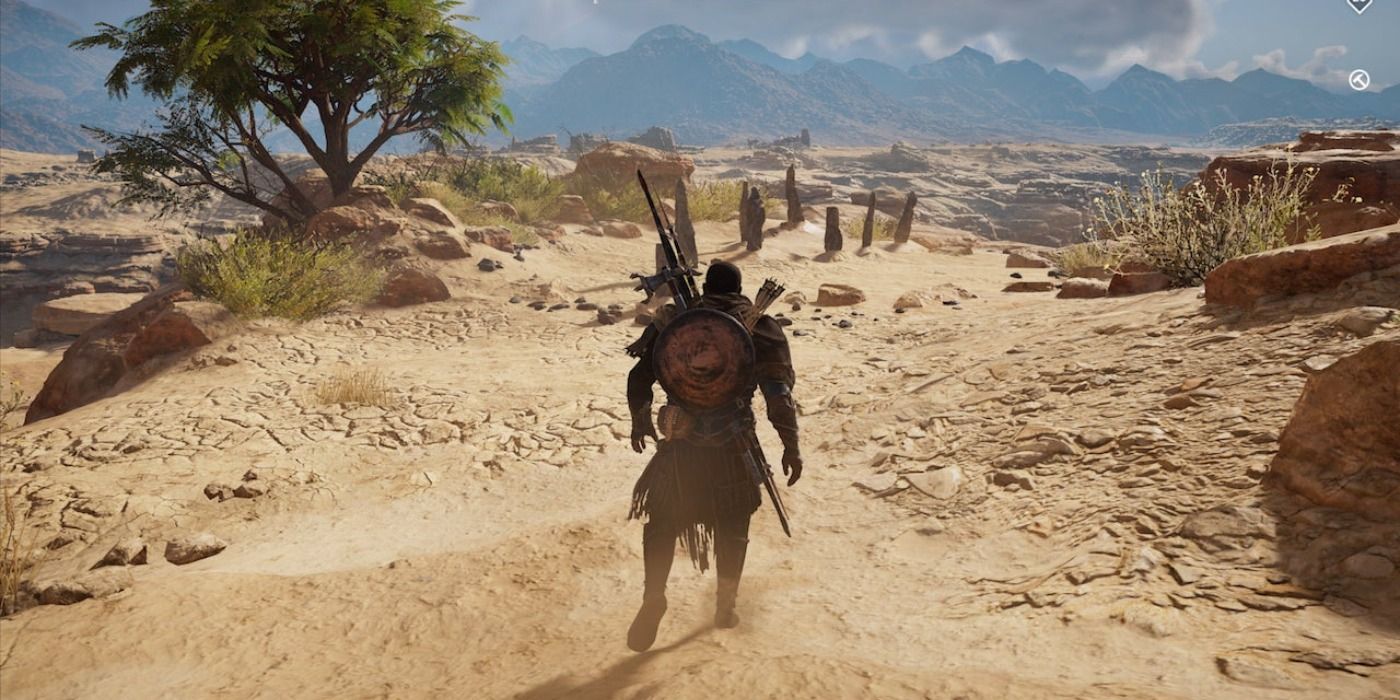 When you make your way to Siwa one of the side quests asks Bayek to collect the stone circles scattered across the map, and there is 12 total. All you have to do at each of these locations is to align the stars in the sky in order to create a constellation, and many find it easier the more constellations they uncover.

The locations of the stone circles can be found in-game by: 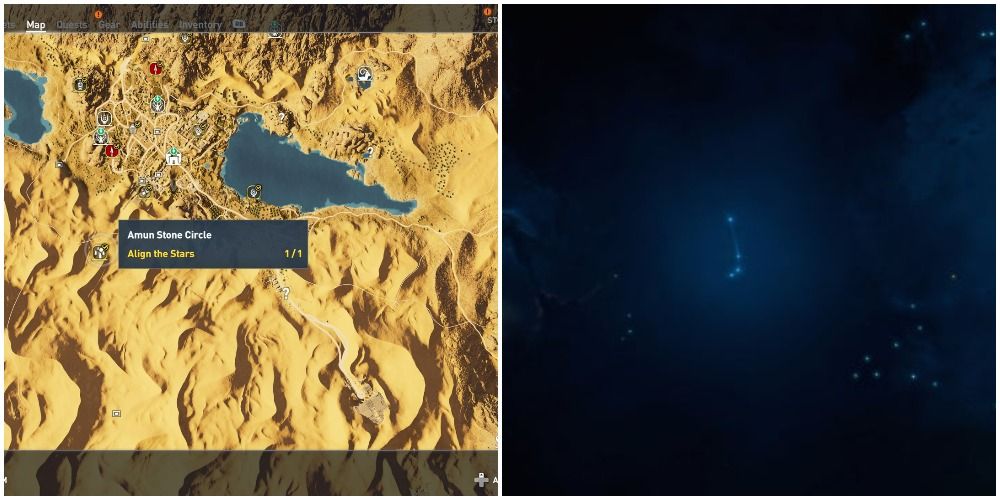 The first Stone Circle that you will find, and also the one that begins ‘Bayek’s Promise,’ is located in Siwa. It is southwest and just outside of the city, so it’s not too hard to find.

This constellation should be placed in the lower left of the star-gazing camera. You should be able to match it here and no rotations should have to be performed at all, but this is the most difficult as there are no other stars to guide your way. 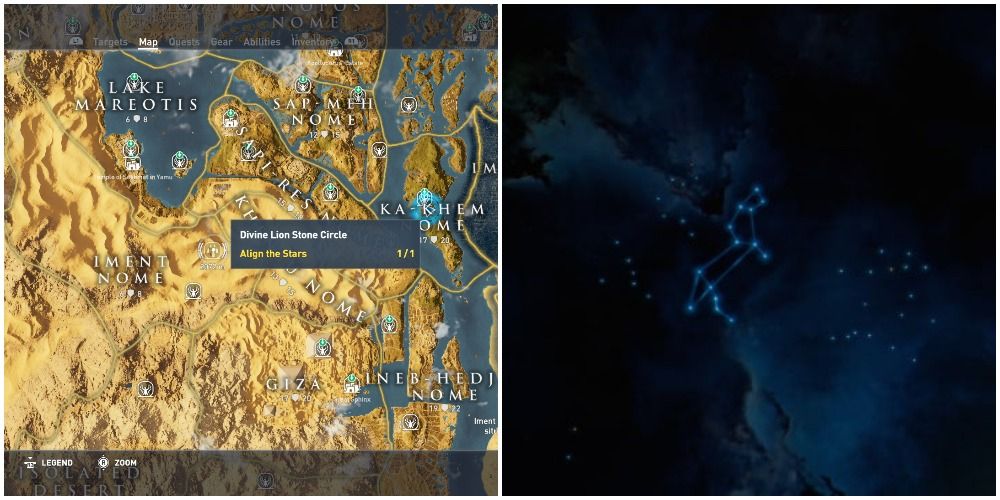 If you head northeast in the Iment Nome region then you can find the Divine Lion stone circle. It is southeast of the Eremos Hideout in the middle of a sand dune.

The constellation you are looking for is near the top left of the camera. You must rotate the stars slightly to the right in order to complete this challenge. 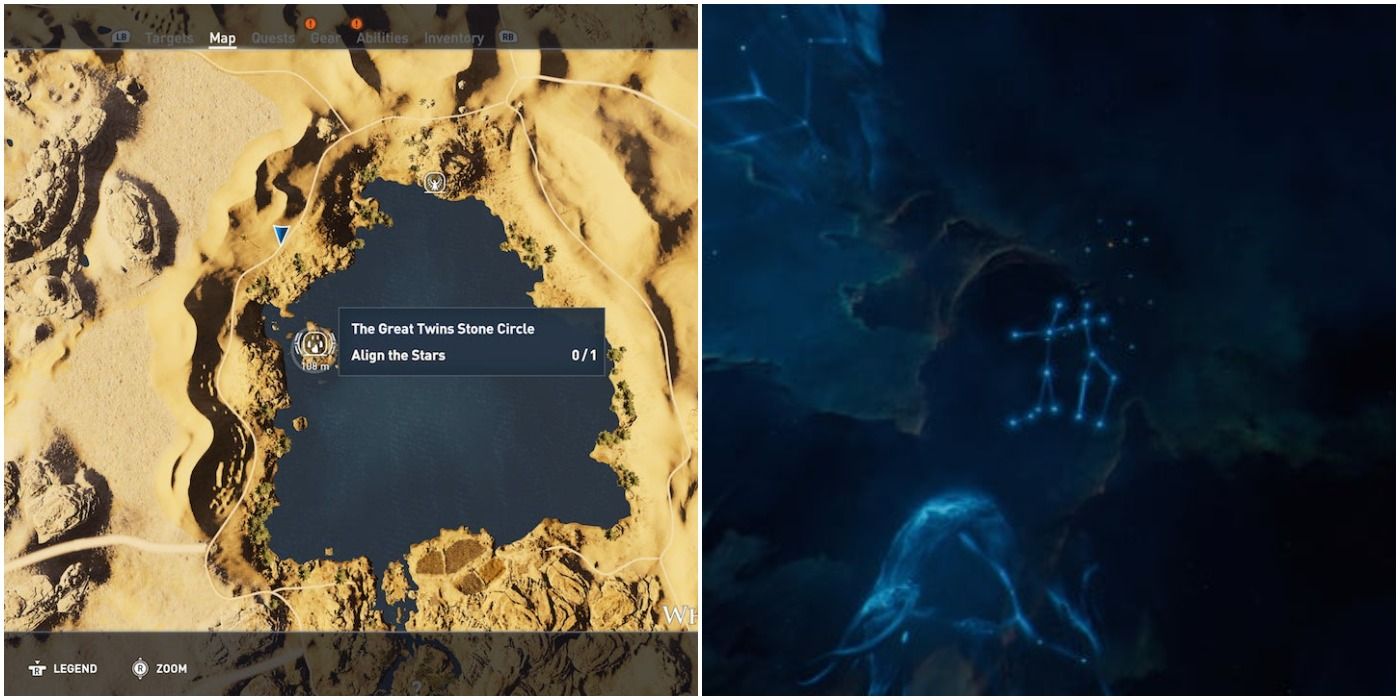 The White Desert Oasis is where this stone circle can be found at the western edge of the northern lake in this region. There will be a small island and this is where this challenge lies.

When looking at the stars go to the far right just southeast of the Divine Lion and slightly turn the constellation to the right. 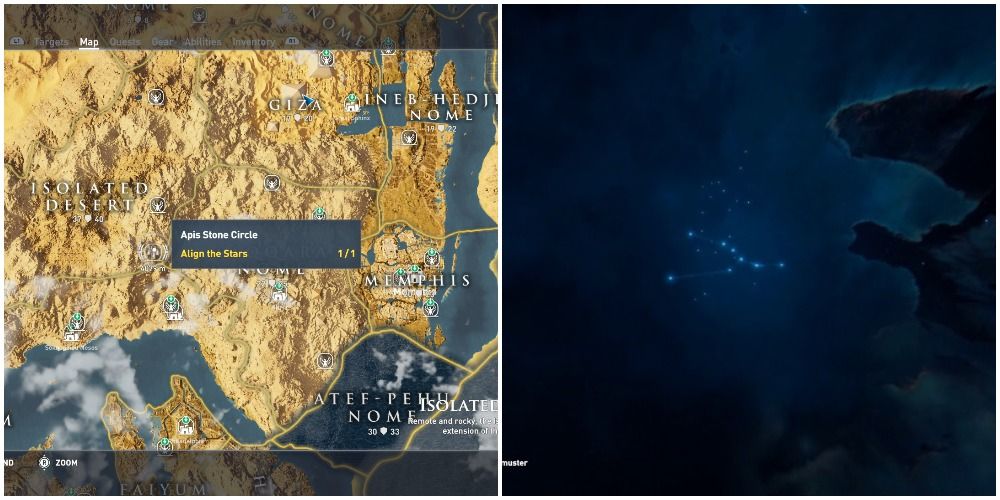 You will need to go to the Isolated Desert and reach the southwest corner of the region. There will be some rocky hills along the border that it shares with Saqqara Nome and this is where this Stone Circle lies.

The stars will have to be rotated to the left 45 degrees and their placement will be near the bottom right. 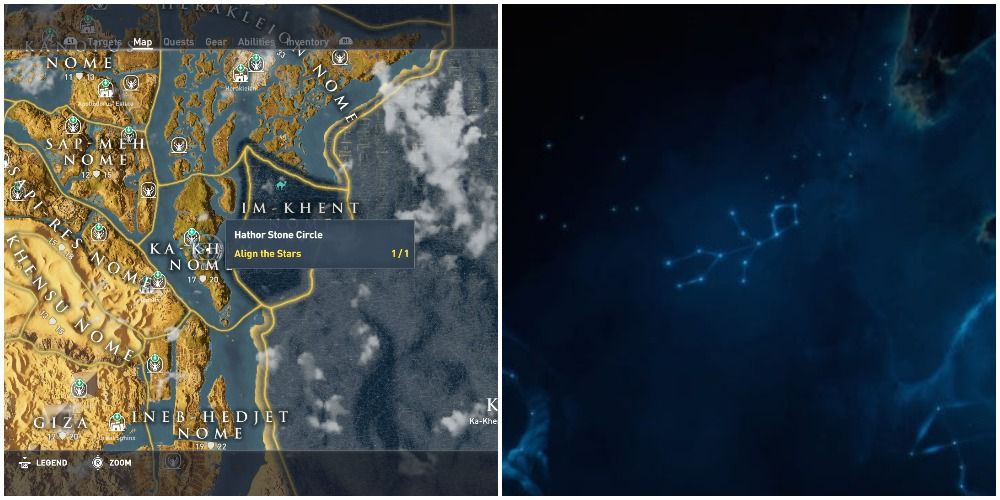 There are two islands in the Ka-Khem Nome region, but you are looking for the largest one in this area. There is a lion lair located on this island, but the Stone Circle is to the north near the middle of it.

When placing the stars you don’t have to go too far as this constellation is just up and to the right past one other constellation. The stars do have to be turned to the left, but not too much as it doesn’t take a lot to make it match. 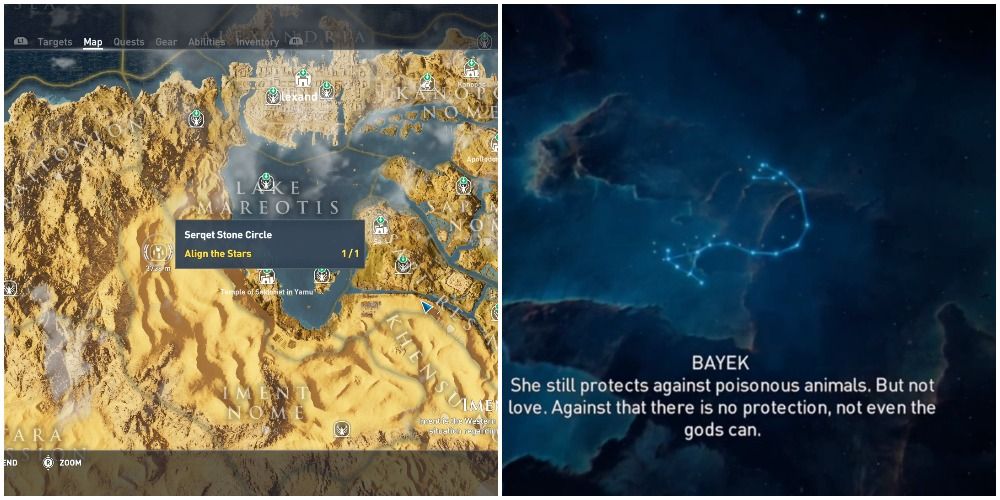 The Serqet Stone Circle is located in Iment Nome west of the Temple of Sekhmet. It is in the middle of the desert toward the north of the island if you are having trouble locating it.

The placement of this constellation is straight to the right and then up a smidge. It will have to be rotated to the right in order to make it match. 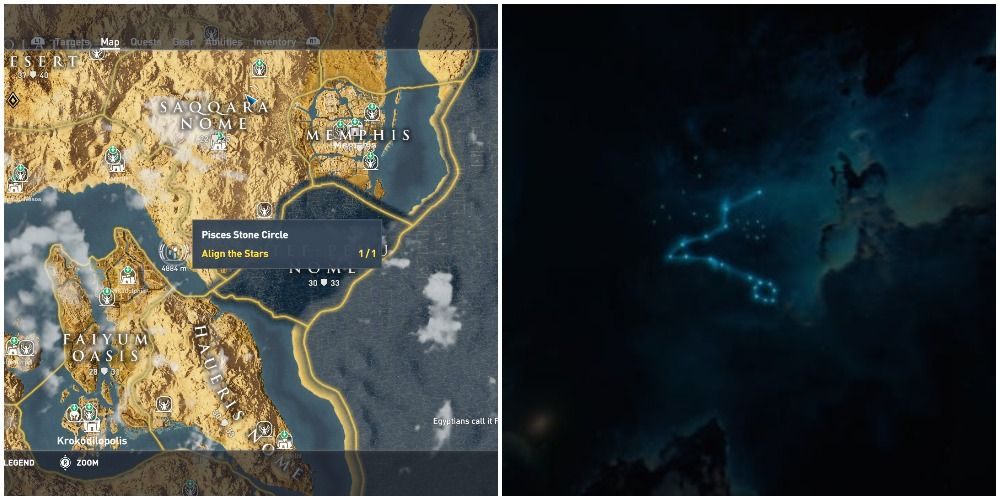 If you head to the region of Faiyum, one of the best areas in the game, in the small part located between the Faiyum Oasis and Saqqara Nome regions, you will find this Stone Circle.

The constellation’s location is just southeast of the starting point and it needs to be turned to the left in order for it to fit. 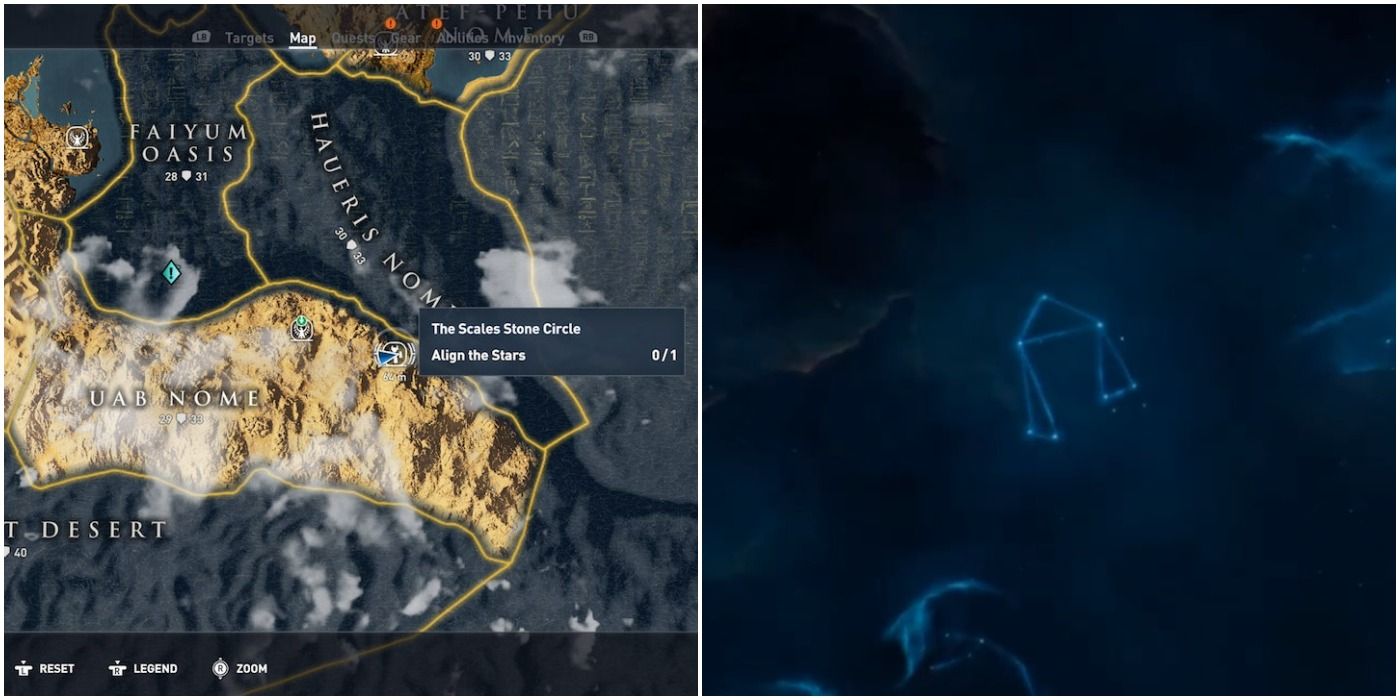 The Uab Nome region is where this Stone Circle can be located and it is in the middle of the border between this region and Haueris Nome.

You want to move the constellation to the right and slightly up, but not too far or you will pass it. It needs to be rotated slightly to the left 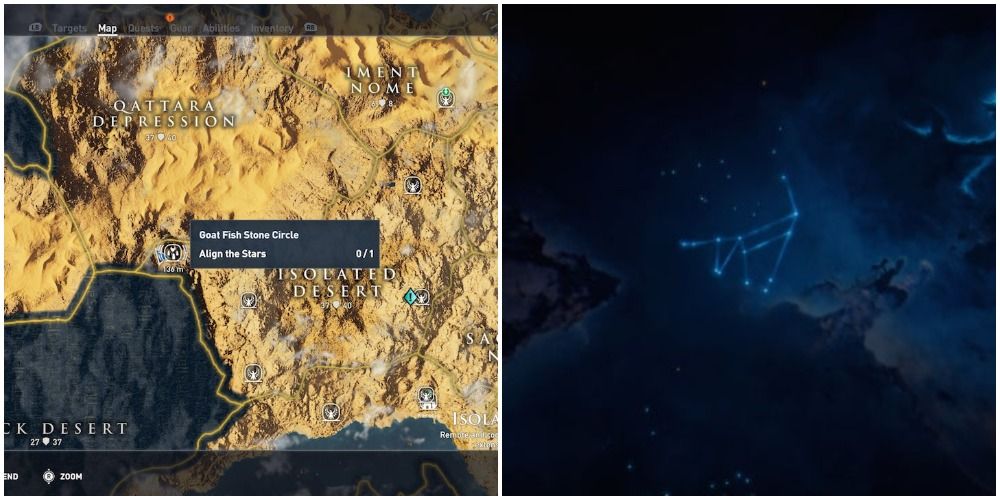 This is another Stone Circle in the Isolated Desert and it is in the far northwestern tip of this region. Make sure to bring your best weapon to fight off any enemies in the area.

The constellation should be placed down and to the right, and it is not past the constellation of the scorpion. A slight rotation to the left does have to be made, and by this point, the Stone Circles have probably become one of the worst parts of the game. 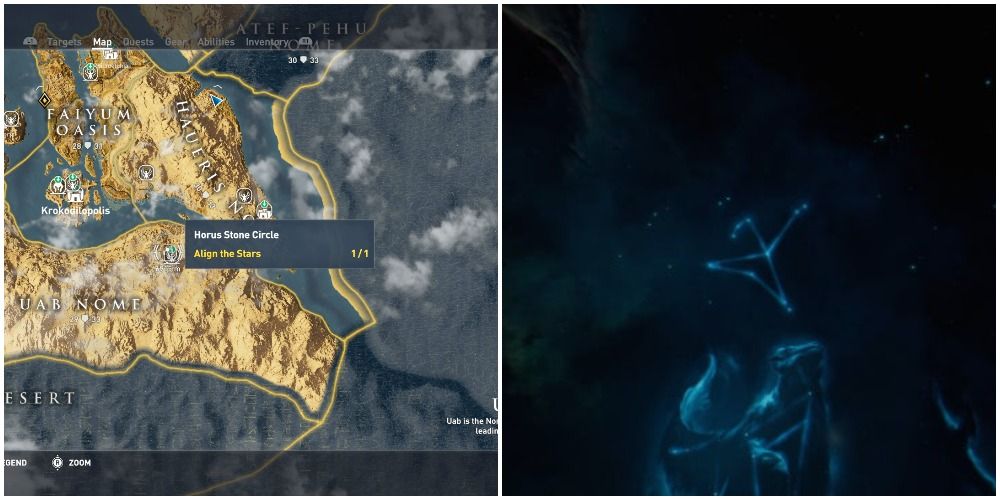 It is not hard to find this Stone Circle as it is not far from the location of The Scales Stone Circle. It is a bit to the west near a small inland lake in this region and there is a viewpoint nearby.

This constellation is to be placed to the left, just past Serqet and it does require a rotation to the right in order to make it fit. 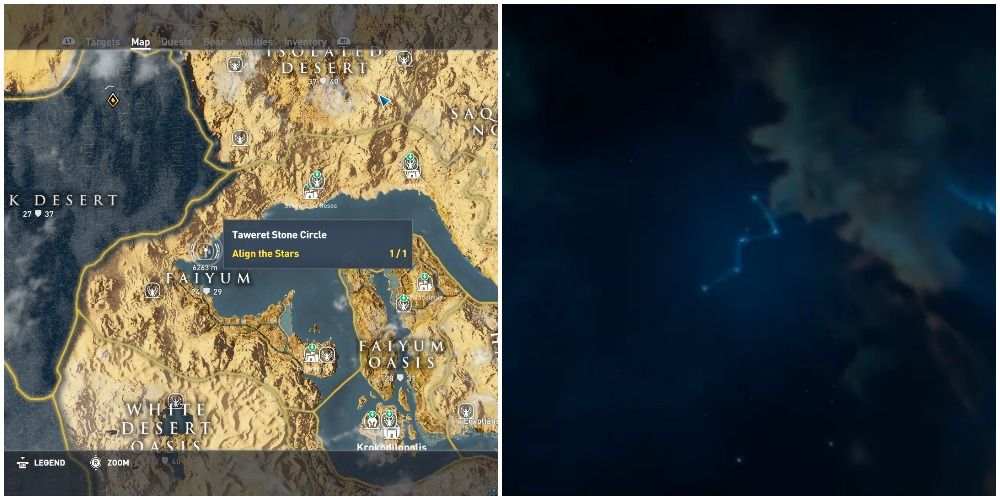 Faiyum is home to another Stone Circle, but this time it is in the western half of the region on the lake’s edge. It can be found between a hippopotamus lair and an abandoned fishing village.

You want to head to the right of the Divinity Lion and then rotate the constellation to the right to complete this challenge. 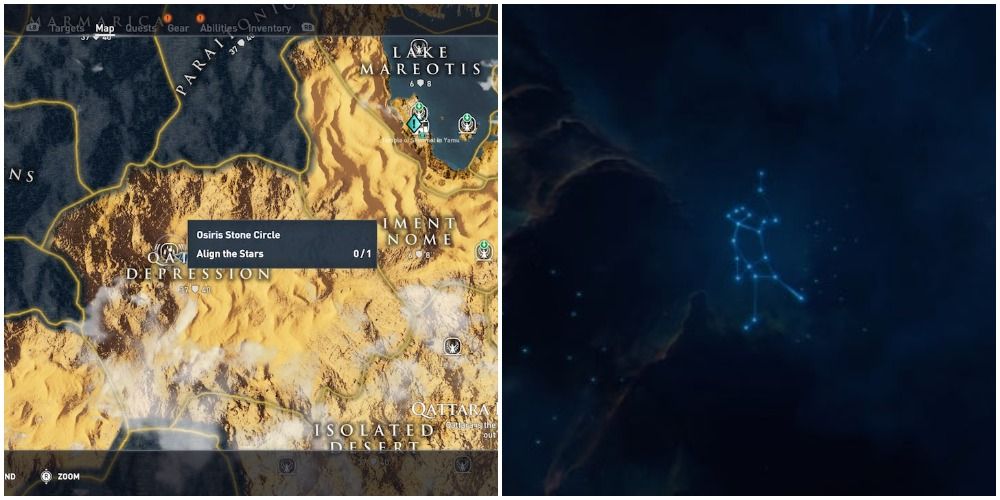 The Qattara Depression is home to this stone circle and it can be found to the north of Aquifer Oasis. It is near the ‘Q’ of the region name if you are looking at your map.

Search The Tombs For Silica 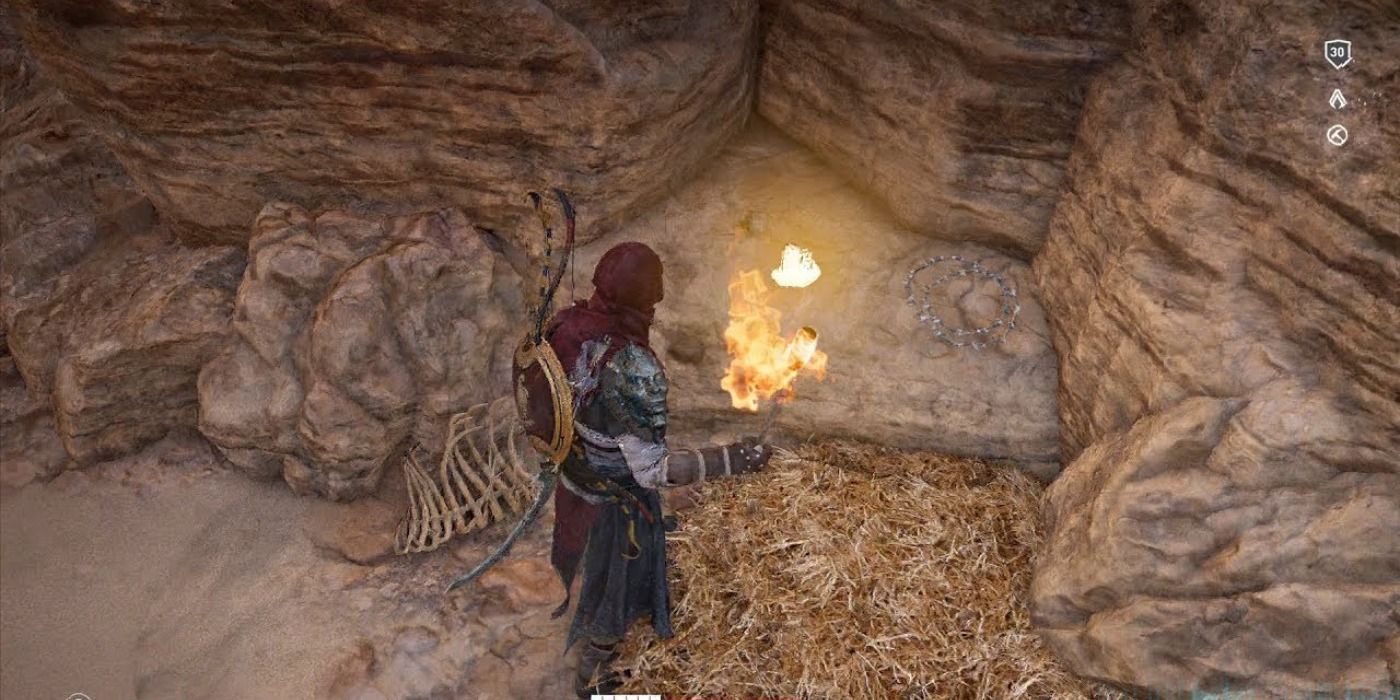 The next step is to search the tombs throughout the world and collect something called Silica. You will need 50 in all and your best bet is to search the tombs as you come across them during the story, which is something players wish they knew before starting the game. If you don’t then you will have to hop around the map to collect all of the Silica, and you still might have to go back to some of the tombs to grab what you missed the first time.

The tomb locations are as follows: 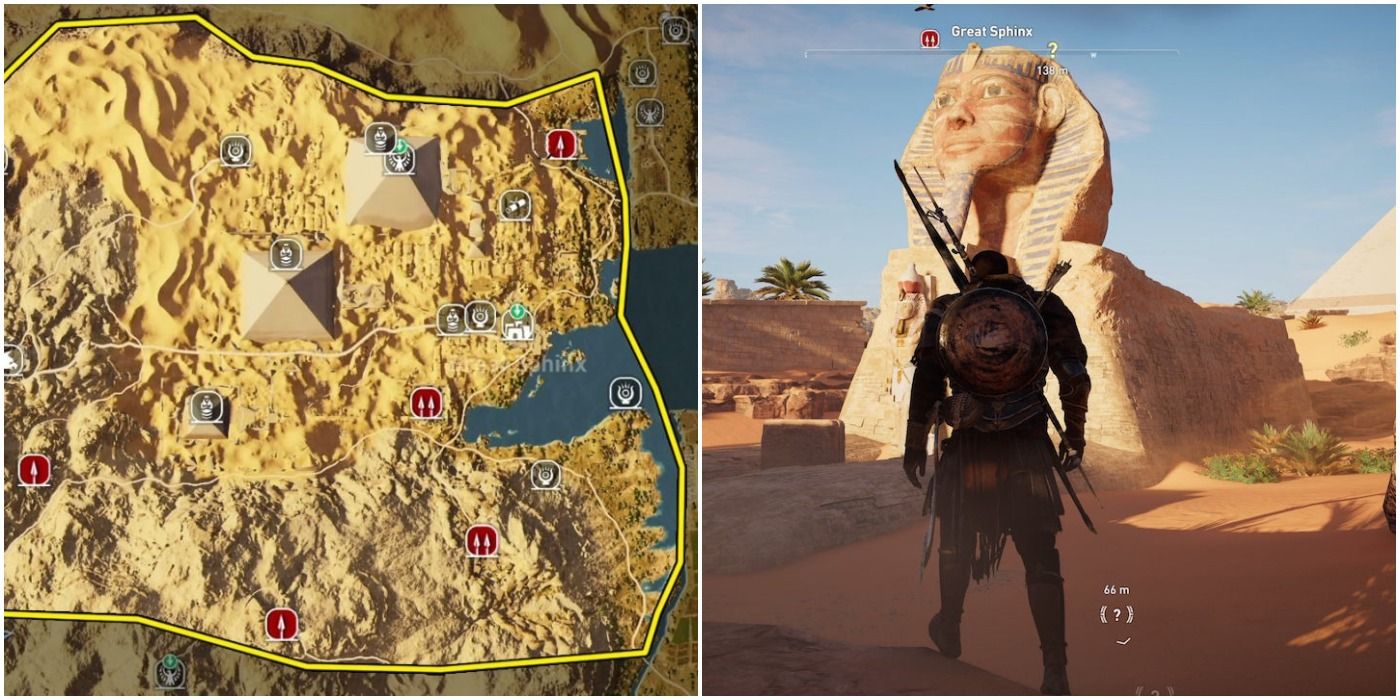 It is best to search the tombs in Giza last, as this is where you have to head anyway to acquire the armor. You need to find the Great Sphinx, which can be located near the water to the right of the three pyramids. 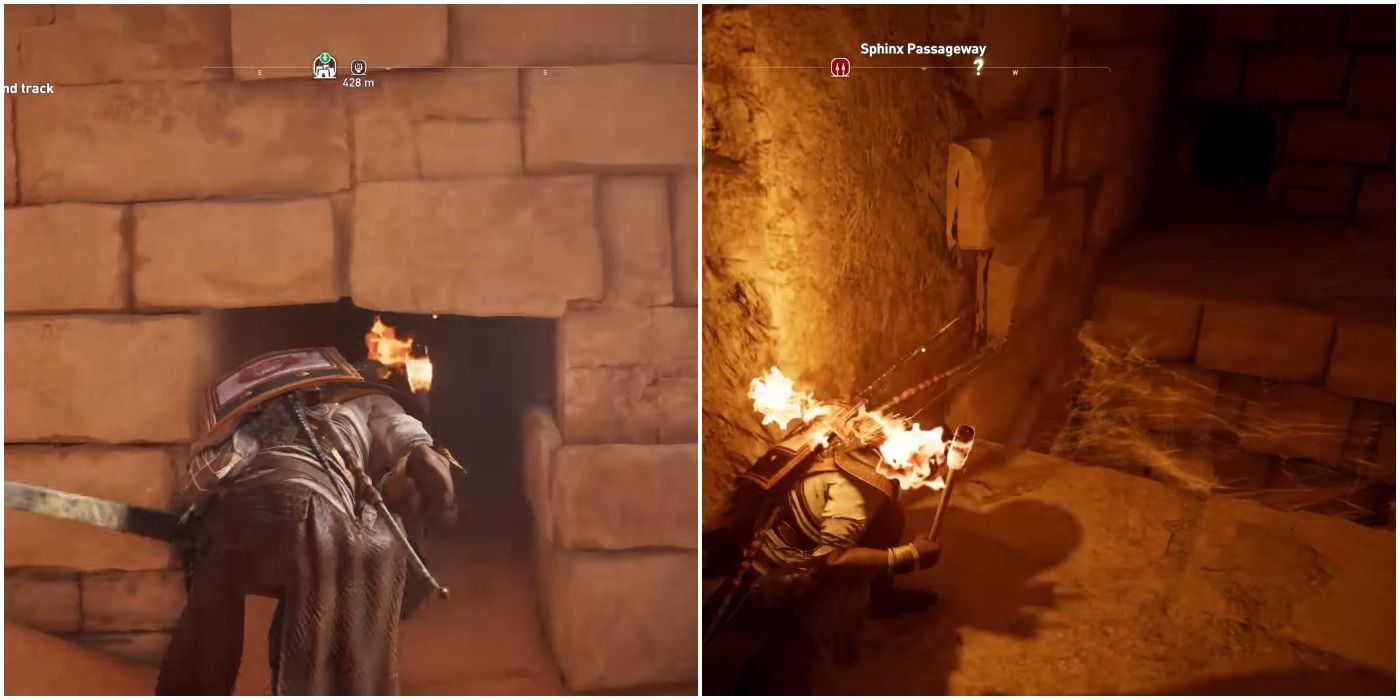 Walk to the back of the Great Sphinx and there will be a small hole in it where Bayek can crouch to enter, and there will be a similar hole in this first room. When you enter through this you want to jump down into the hole covered in spiderwebs. You will want to pull out your torch as it will be very dark down there and it can be difficult to find your way without one. 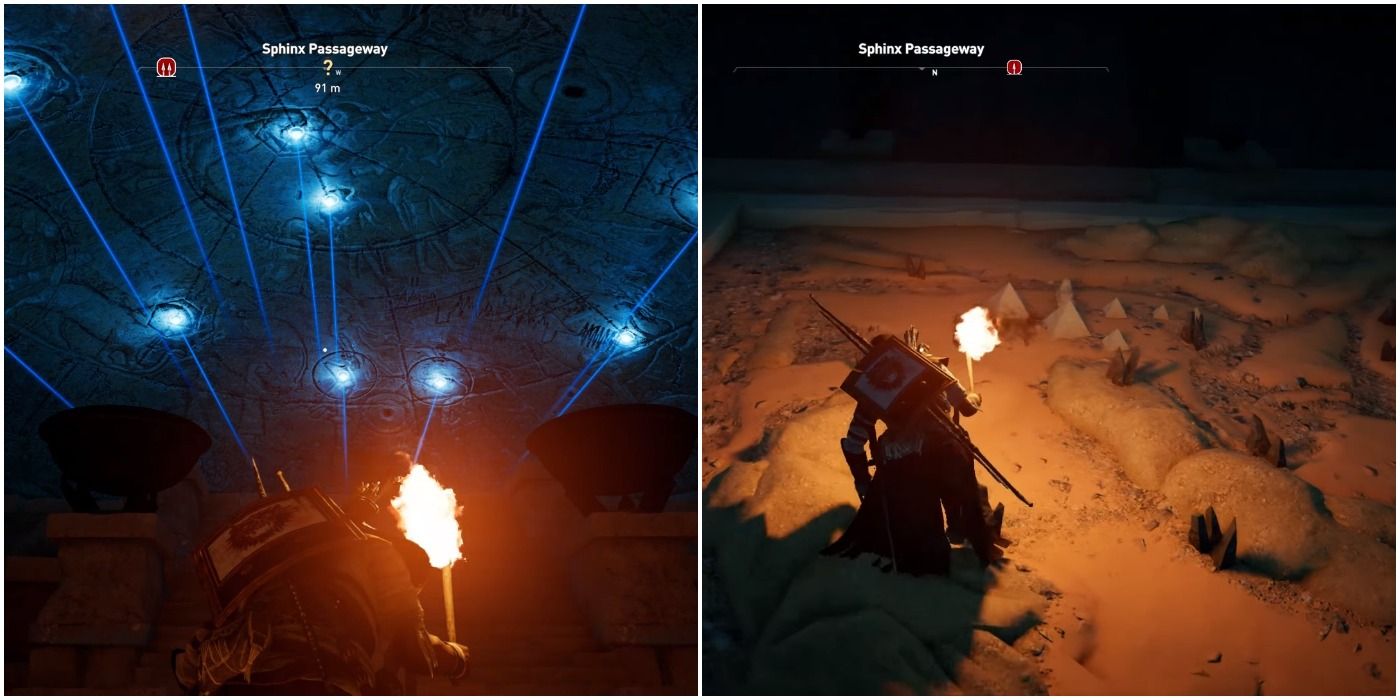 You want to make your way through the various tunnels inside the Great Sphinx until you reach a room with blue lights on the ceiling. Once you have completed the Stone Circles there should be 12 lights that correspond to each one you finish. This is also the same room where a map can be found that shows the locations of some of the Stone Circles.

Interact With The Map 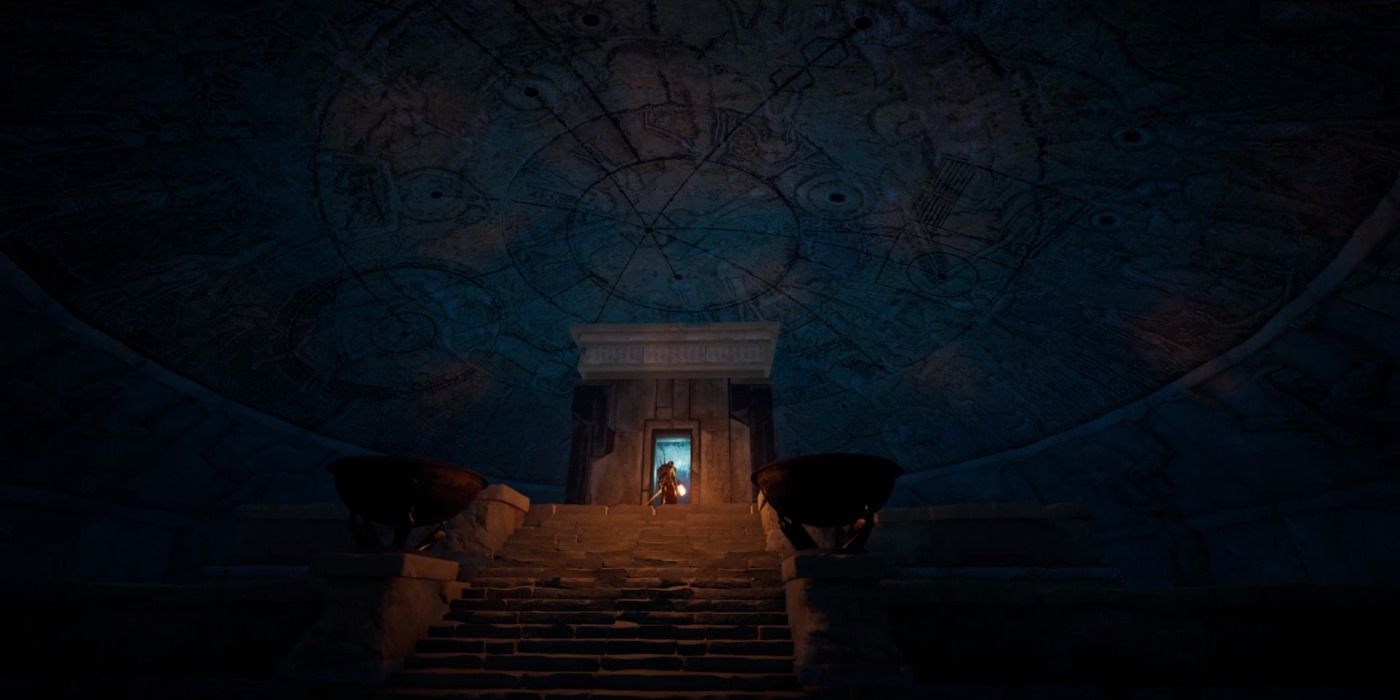 You will need to interact with the map which will cause it to ascend in the air and turn the blue lights to orange, which is something most players don’t realize they could do. Another doorway will be revealed and it will lead you to where you can acquire the Isu Armor.

Head through this and make your way through until you reach a tall square stone with a similar cut out in the middle of it. It will be in the middle of the room at the top of the big stone stairs.

Place The Silica And Retrieve The Armor 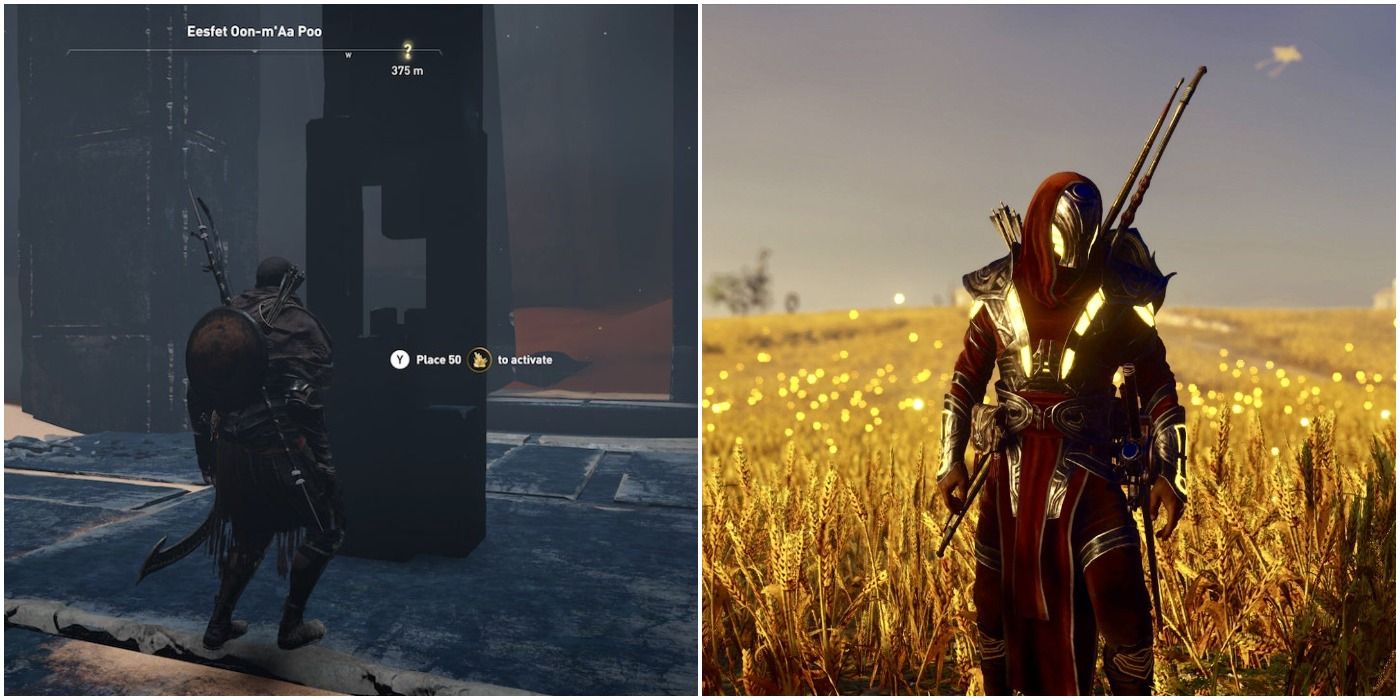 You need to interact with this stone in the middle of the room and it will ask you for 50 Silica, which you have already collected from the tombs. This will complete the location and place the Isu Armor Set in your inventory for you to use for the rest of the game, and it is cooler than any armor in Assassin’s Creed Valhalla.