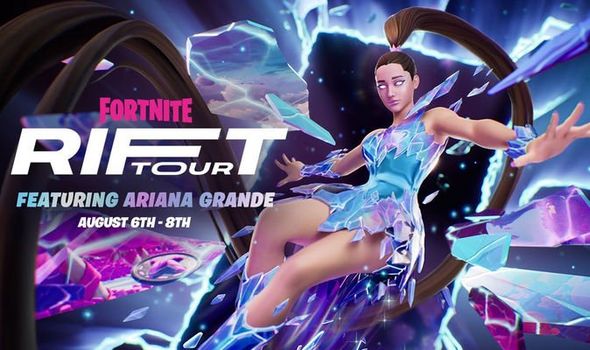 Epic Games has just announced its latest major tie-in, with pop superstar Ariana Grande heading to Fortnite. Ariana Grande is following in the footsteps of Travis Scott and Marshmello by headlining some upcoming in-game concerts. Ariana will be performing in Battle Royale during the upcoming Rift Tour event, which launches this Friday.

And in the run-up to the Fortnite season 7 live event Battle Royale players will be able to get an Ariana Grande skin.

The Thank U, Next singer will be available in the Fortnite Item Shop at 8pm eastern time on Wednesday August 4.

For those in other regions that’s 5pm pacific time on Wednesday, 1am BST on Thursday and 2am CEST on Thursday.

Besides the inbound Ariana Grande Outfit, the Piggy Smallz Back Bling will also be available.

Piggy Smallz is the name of Ariana’s peg teacup pig.

The Ariana Grande skin is launching just a few days ahead of the Rift Tour begins.

Like with previous Fortnite concerts, Battle Royale fans will have multiple opportunities to see the Ariana concert.

Epic Games advises people looking to tune in to the Fortnite Ariana Grande event to arrive an hour before the show starts.

The Fortnite makers said: “Ensuring that fans around the world can catch the Rift Tour, the experience spans five showtimes over three days. We recommend fans arrive in Fortnite 60 minutes before showtime, and the Rift Tour Playlist should be live 30 minutes before each show. Before Ariana’s arrival, the Rift Tour kicks off with Fortnite-themed experiences — pairing popular tracks with moments based on elements from the game.”

In the run-up to the Fortnite Rift Tour event starting players can take part in the first wave of the Rift Tour quests.

Rewards for these quests include the Cosmic Cuddles Loading Screen, Rift-sterpiece Spray and Cloudy Kitty Emoticon.

Epic Games said: “Ahead of the show, you still have time to unlock rewards for the first wave of Rift Tour Quests. Hop into the game, check out the Quests in the Rift Tour tab between July 29 and August 8, and target ready to unlock rewards.

“Additionally, everyone who attends the Rift Tour will receive the Cuddly Cloudcruiser commemorative Umbrella.”