You are here:
Home / Arcade1Up’s Terminator 2 Was A Struggle To Setup, But Worth It In The End

Arcade1Up’s Terminator 2 Was A Struggle To Setup, But Worth It In The End

It’s been two weeks to the day since I received Terminator 2: Judgment Day from Arcade1Up, and I think I finally have it working properly. Now that it’s fully built and operational, I’m enjoying it a lot. Arcade1Up has modified the design of the original 1991 light gun game for mass production, but maintained the style and charm that made Terminator 2 a classic. Even if you don’t have much nostalgia for T2, it still holds up extraordinarily well – albeit with some fine tuning to the difficulty, which Arcade1Up mercifully provides. I’m disappointed that I had so many issues with this machine through the building process, including needing to replace defective parts, but it hasn’t soured my experience with it. It couldn’t be mistaken for the original, but this is still a great way to own an important piece of video game history.

Terminator 2: Judgment Day has a unique backstory. Produced by Midway in 1991, it was literally developed alongside the film. Developers from Midway were on set during production of the movie capturing footage of Edward Furlong, Robert Patrick, and Arnold Schwarzenegger for the game. T2 is a side-scrolling, on-rails shooter that takes you through the future war between Skynet’s machine army and John Connor’s resistance fighters, before sending you back in time to protect young Connor from the T-1000. T2 didn’t have a lot of staying power in arcades once 3D shooters like Virtua Cop, Time Crisis, and House of the Dead came along, but for a few years in the early ‘90s, Terminator 2 was one of the most advanced and popular games in arcades across the US, even briefly surpassing Street Fighter 2.

Arcade1Up’s recreation matches the design of the original almost perfectly. Everything from the light-up marquee to the iconic side panels to the game instructions printed under the display are spot on. There are a few big differences, however. Firstly, you won’t find any of the original Midway logo anywhere on the cabinet. I assume this is for licensing or copyright reasons, but look into replacing them. You also won’t find the coin slots on the front, which is a shame. Even if they were strictly non-functioning, it would be nice to have that detail for authenticity sake. The optional riser, which raises the cabinet up an extra foot and half, has new art on it. Fortunately, it fits the overall aesthetic quite well. 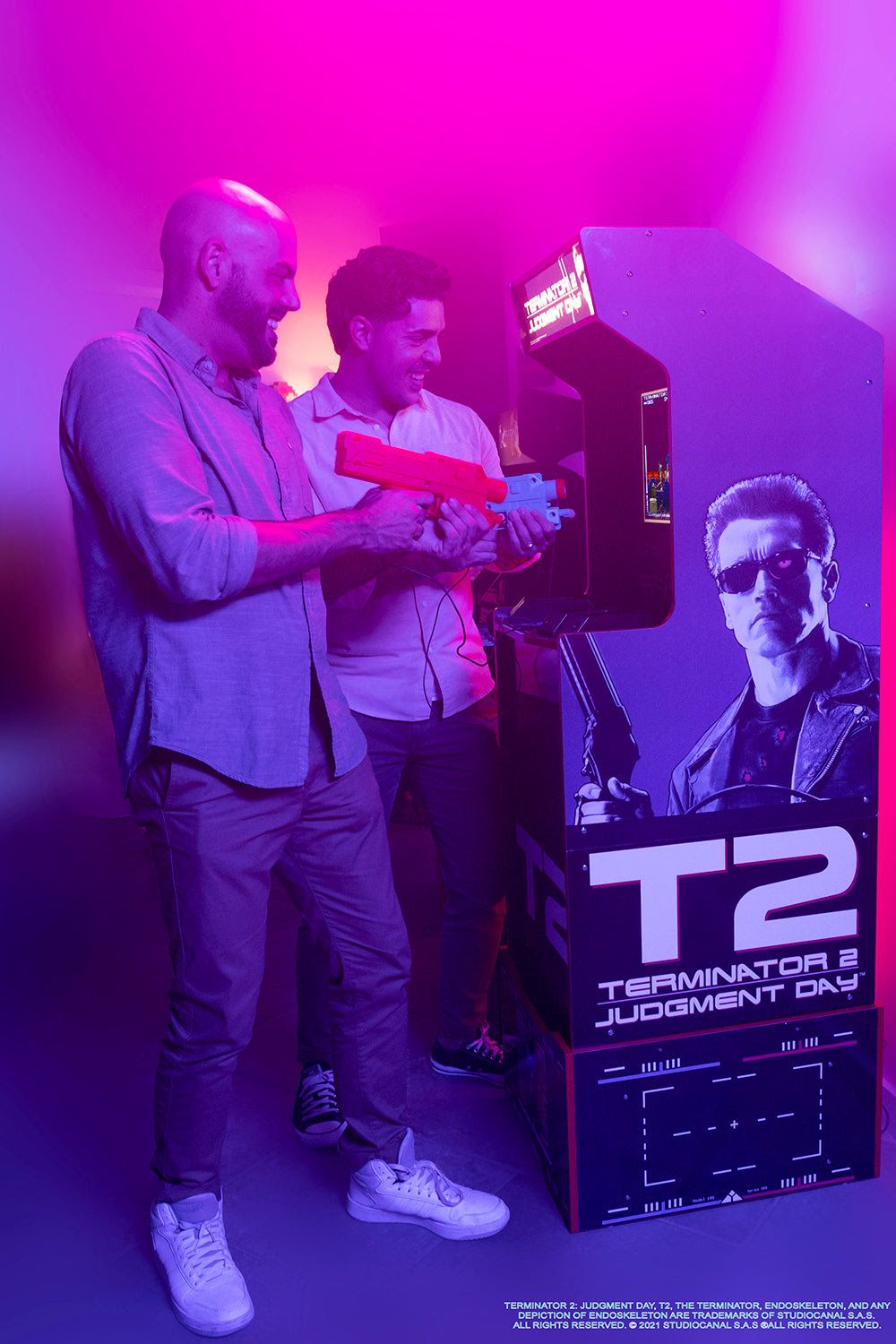 The big difference between the original and this version is the screen and the guns. The original featured a resced, rear-projection display that reflected off a two-way mirror. Behind the mirror were light bulbs that flashed to show explosions. The guns were mounted to the cabinet featured LED lights and an internal pinball coil that simulated recoil. The Arcade1Up version is quite a bit different. It has a smaller, 17-inch LCD display and tethered guns similar to what you might find on a modern Time Crisis machine – though significantly lighter and cheaper feeling. You play this version of Terminator standing back from the machine rather than firing into it. It’s the same game, but it’s a very different experience.

The visual presentation is much sharper in this version and aiming the gun is easier now that it isn’t fixed on a ball joint. I would have liked to see some kind of retro filter in the settings that would better approximate the original look and feel of the game, but it’s close enough. I’m willing to forgive the concessions made to the screen, but I’m disappointed by the guns. The red and blue plastic guns look much cheaper than the originals, and the triggers on both guns feel loose and squishy with no click or action to let you know when they’re fully depressed. The haptic feedback definitely helps though. Each gun has its own distinct vibration that simulates rapid-fire whenever you hold down the trigger or file missiles. It makes the guns a lot more fun to use – when it works.

I had some major technical issues with my version of T2. I don’t recommend assembling the cabinet by yourself. Many of the wood pieces are quite heavy and it can be difficult to line them up when you’re trying to screw multiple pieces together, especially when the pilot holes are misaligned or completely missing, as they occasionally were on mine. The directions are fairly straightforward, but the manual doesn’t tell you to unwrap the internal cables before closing the box, which may seem obvious, but it caused me a bit of a headache.

My PCBA turned out to be defective, which I discovered when neither gun worked. Luckily my interaction with Arcade1Up’s technical support was great. They responded quickly and sent me a new PCBA immediately, no questions asked. From looking around online, I discovered that I’m not the only one who has received defective parts either. Replacing the PCBA was slightly frustrating because it involved disconnecting several tiny, fragile cables, but eventually I got it replaced and the cabinet worked. I then discovered that one of the guns would lose the ability to vibrate during certain levels. This issue took a bit more investigation with technical support, and eventually we determined that the Smart Rumble option that changes the haptic feedback as you run out of ammo was defective. I turned it off and the gun seems to be working correctly now, but I can’t use the Smart Rumble feature as intended.

Terminator 2 is one of Arcade1Up’s most expensive games. It’s a significant investment at $700, so I’m surprised that I had as many issues as I did. Ultimately, I love having the game and I may look into some aftermarket alterations, like Midway decals, better guns, and screwhole covers just to make the finish on the cabinet a little cleaner. It’s been great to reconnect with a game I spent so much time playing as a kid, and now I’m fantasizing about an Arcade1Up version of Konami’s Aliens from 1990 right next to it. If I’m not careful, I might end up with my own private arcade in my basement. Considering how much smaller and easier to maintain they are, I’d rather have a collection of Arcade1Up machines than the real ones.