You are here:
Home / APICO Is A Sweet Farming Sim Full Of Bees

APICO Is A Sweet Farming Sim Full Of Bees

APICO appeared out of nowhere, a bit like the only bee that has ever stung me. Developed by TNgineers, this sweet farming simulator is more about bees than potatoes and cows. On its surface, it wears its inspirations from Stardew Valley clearly on its suit, but beneath the pixelated aesthetic and soft soundtrack is an intense beekeeping simulator.

Things start out as you might expect: your grandparents are waiting on the dock of Port APICO, a place absolutely teeming with bees and beekeepers. Other than the monstrous swarms of bees everywhere, it’s largely a familiar story. You’re tired of your big-city job and want to escape to the countryside. Your grandfather gives you a workbench and an axe and sends you out to start cutting down all the trees in the village. No one blinks an eye.

After you’ve cut down all the trees, the game instructs you to start pillaging beehives. There are dozens of them. Forest Bees, Common Bees, Verge Bees, these are just some of the little bee-friends you can encounter in the first hour. Here the game opens up into an almost overwhelming beekeeping simulator. Build apiaries and beehives and use slides to collect the bees and then cross-breed the bees to make new bees and plant flowers for the bees to pollinate and then collect more bees and more bees and more bees and…

I don’t know how many bees there are in APICO. I’m not sure how many combinations there are, or new species you can discover or cross-breed. ‘A lot’ is pretty much the closest figure I can give you. You can tell from the hugely empty beepedia in your inventory. I actually found the thing all a little daunting, which is not exactly the relaxation I was expecting. Once I found my groove, though, the game provides you with all the tools you need to automate your beekeeping.

It turns out the bees in APICO don’t just produce honey. These bees are magical. They’re shiny and special, and if you play your slides right and shuffle your bees in the correct way, you can have what are essentially bee factories. They will produce wood and stone and just about whatever you want. Sell your goods in the local town. Buy more. Sell more. These poor little villagers never knew what hit ‘em. 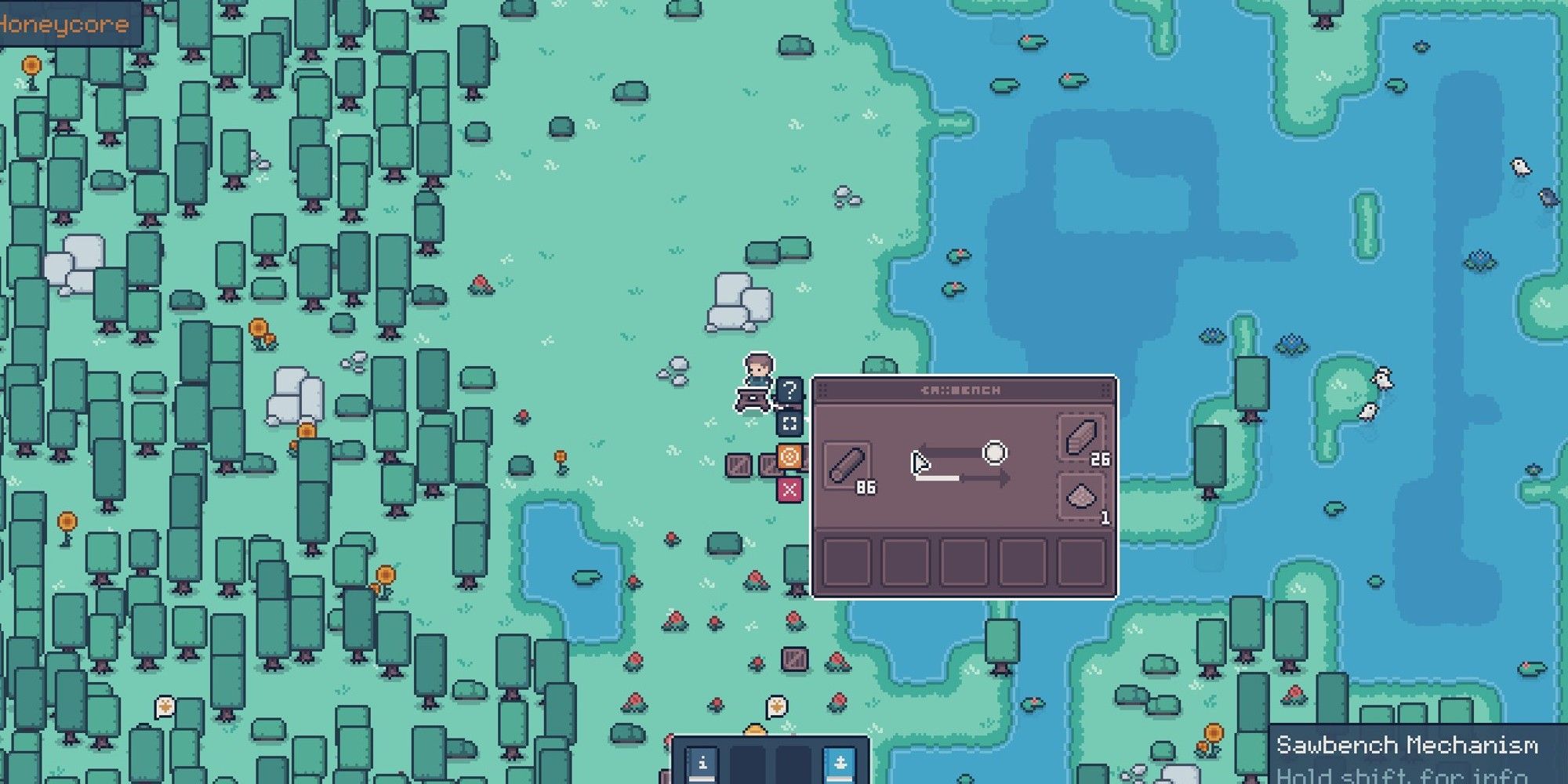 Thankfully, all that inventory management is made so much easier by a window tab mechanic that is one of the best I’ve seen in recent survival/crafting games. V Rising is absolutely shocking compared to APICO, for example. Basically, the inventory windows stay open, can be shifted around, you can change where you’ll deposit items with a Target button, and whenever you craft you pull from all nearby chests. It’s amazing. Get this system in other games, and send thanks to the TNgineers.

While your hideous bee factories churn out resources, you should take to the sea and explore the rest of the world. It’s a pretty big map, and you’ll need a boat to cross the deep sea. There are new species of bees to discover out there in the wild, as well as other NPCs and hidden areas. I’d say there are around 100 hours of content in the game in its current form, but because of its open-world and open-ended goals, you can obviously get a lot more out of it.

There are also some other neat parts that I’ll point out in one running list: a percentage of the game sales go to the preservation of actual real-life bees; the NPC text boxes have the character’s pronouns (I haven’t seen enough of this in recent games, so this was a great surprise); the game itself is based on the Forestry Mod for Minecraft, which is all about keeping bees; and APICO has a fully-fleshed out multiplayer mode for up to four players.

In terms of criticism, I only have a couple of points there. The game has a lot of content right now, but some people will find that there isn’t enough thanks to how repetitive it is. I hope that APICO in its current state is a foundation for further expansion rather than a finished product. The interactions with the NPCs don’t run too deep, and there’s nothing like Stardew’s romance available. Alongside the expansion of its endgame content, it’d be fun to see the world of Port APICO expanded on as well.

These might be breaking points for fans of the genre, but really, even though the game might be inspired by farming sims, it’s really about the bees – it’s a semi-educational, relaxing experience, with a fantastic inventory system, cute graphics, and bees. Lotsa bees.