You are here:
Home / Amphibia More Than Delivered With All In, It Set A New Benchmark

Amphibia More Than Delivered With All In, It Set A New Benchmark

Amphibia had so much ground to cover with its past episode. ‘All In’ was the culmination of three entire seasons with Anne Boonchuy, Sasha Waybright, and several key characters returning to the human world as they seek to prevent a full-scale invasion by King Andreas and his evil robot army. Families are reunited, friendships are tested, and everything is on the line.

Even with an extended runtime of 47 minutes I went into this episode nervous about how so many individual storylines and expected conclusions would stick the landing. Creator Matt Braly told me ahead of time to expect a blockbuster filled with epic moments and worthwhile payoff, but knowing how many characters were involved and where exactly they would all end up left me filled with nervous excitement. The end result was beautiful.

It wasn’t perfect, with certain emotional crescendos coming out of nowhere with little prior development, but given Amphibia is seeking to tell such an ambitious story within the format of an animated show you can’t help but applaud everything it manages to achieve. This extended episode is a relentless barrage of defining moments for the Calamity Trio while seeking to give The Planters, Boonchuys, Mr. X, Captain Grime, and goodness knows who else a worthwhile conclusion to their respective arcs while still allowing the greater journey room to breathe. Somehow it all works, with writers Gloria Shen, Jenava Mie, and Michele Cavin delivering an epic battle that balances emotion and action with supreme grace. 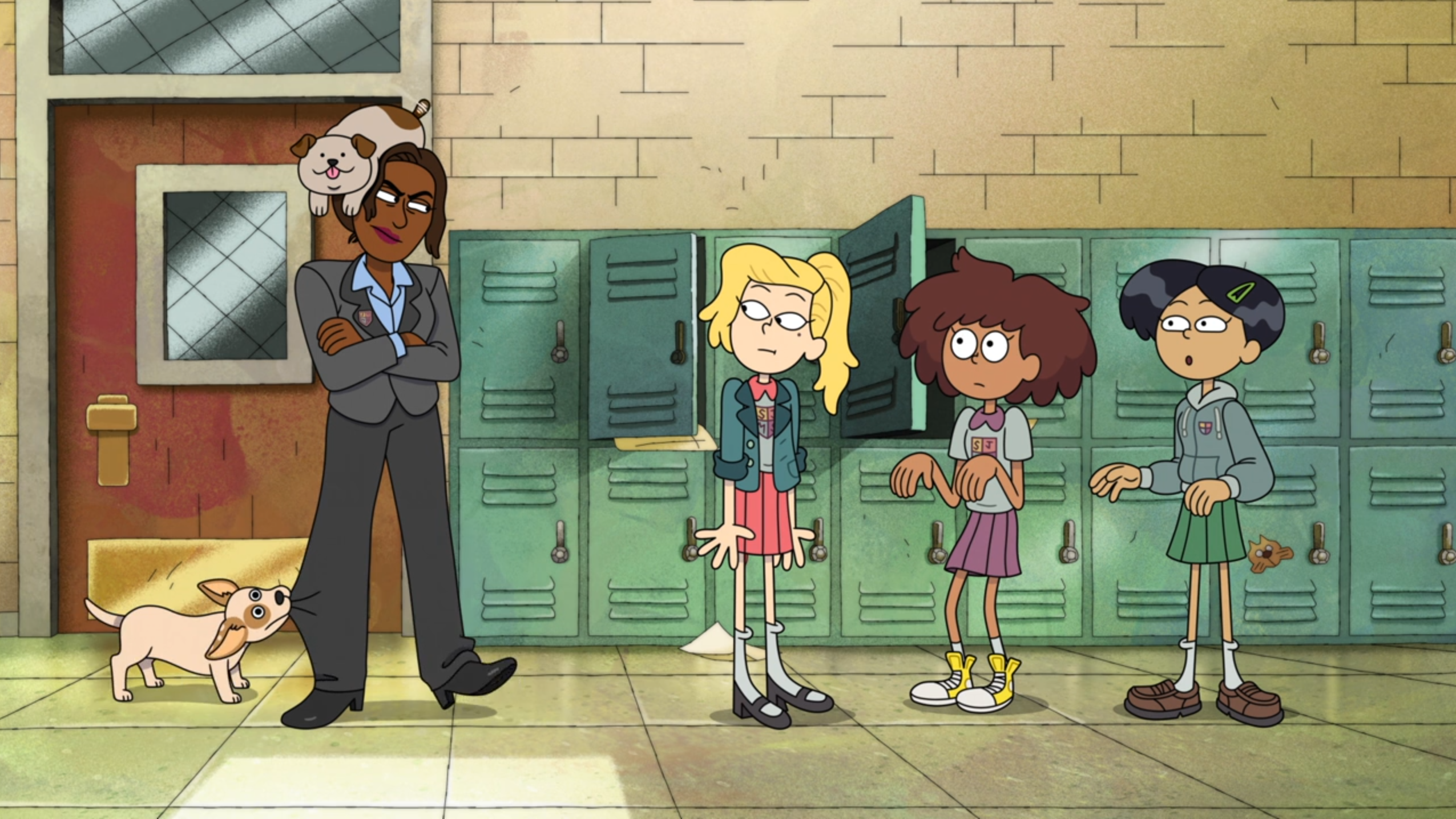 We last left Anne Boonchuy and friends being held captive aboard Darcy’s ship, unable to escape as King Andreas emerges amidst the Los Angeles skyline with a genocidal agenda on the cards. Within moments, he is blowing the city to pieces, likely killing thousands and leaving architecture in tatters purely to showcase how much power he has. The military doesn’t stand a chance with tanks and helicopters exploding into nothingness as our heroes watch, powerless to help until being freed from their restraints. Because they’re the good guys an escape route soon rears its head. Anne and Sasha reunite with loved ones before taking shelter at their nearby school to piece together a plan. It’s here when things really shift into overdrive, and we seldom have a moment to collect ourselves for the next half hour.

Sasha opts to track down Marcy and free her friend from the core’s control while Anne is pulled into a battle to the death against King Andreas. Splitting the trio up and providing each of them a final battle with recognisable stakes does the episode so many favours, while allowing supporting characters to fill in the gaps and conclude their own storylines without ever feeling like a burden. The Planters finally confront the giant birds who tore their family apart so many years ago, Olivia and Yunan ignite the sparks of a romance that fans have long been hoping for, while even RuPaul’s Mr. X goes through a redemption arc to help save the world and finally embrace the strange frog creatures who once eluded him. Captain Grime also loses an arm, which in an episode filled with references to anime and games, I can't help but wonder if it's meant as a nod to Troy Baker's character in Call of Duty: Advanced Warfare who also gets a limb lobbed off. 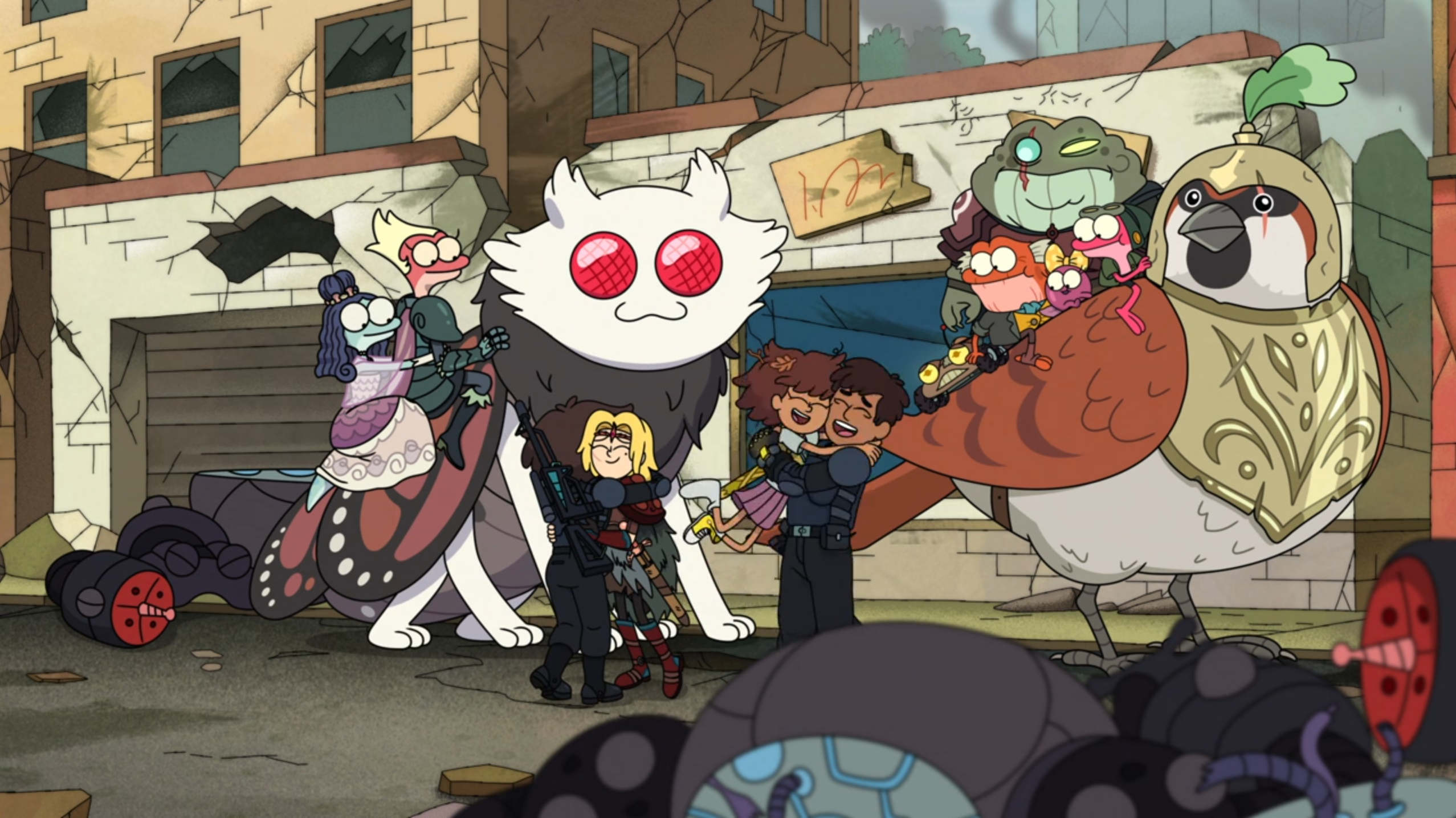 I’m relieved that Disney allowed this episode to run without compromise, since splitting any of this apart or burdening fans with a cliffhanger at the halfway point just wouldn’t have worked. The two final battles involving Anne, King Andreas, Sasha, and Darcy thematically compliment one another, both coming to a conclusion as each member of the Calamity Trio confronts their inner demons and past prejudices to recognise how they’ve all become much stronger people after all the trauma they’ve been through. Anne begins the episode in a flashback where her teacher asks her to write an essay with the topic of exploring who she is as a person. Before Amphibia she was a troublemaker easily pulled into schemes and allowed friends and family to walk all over her. There was no self-worth, no recognition of her talents or abilities, and now after almost losing her life in Amphibia while also building a new one she has arrived at a place where even saving the world isn’t out of reach.

When she embraces her powers to kick the living piss out of King Andreas its almost sobering to watch, but tragedy kicks in when her light fades away and she collapses to the ground. Our heroine has lost, and the battle will follow – but with the help of her friends, family, and a catchy k-pop banger she rises from the wreckage to finish the job. Well, almost – Sprig comes along shortly after to read out a letter from Leaf to seal the deal and enact a coming redemption arc, but Anne’s big moment is the one all of us will remember. I wish we had more time to savour it before the wheels keep on turning, and perhaps in the future we will, but Amphibia managed to make this moment land when so much was set against it, all while never taking away from the plight of Anne's fellow characters in the process. 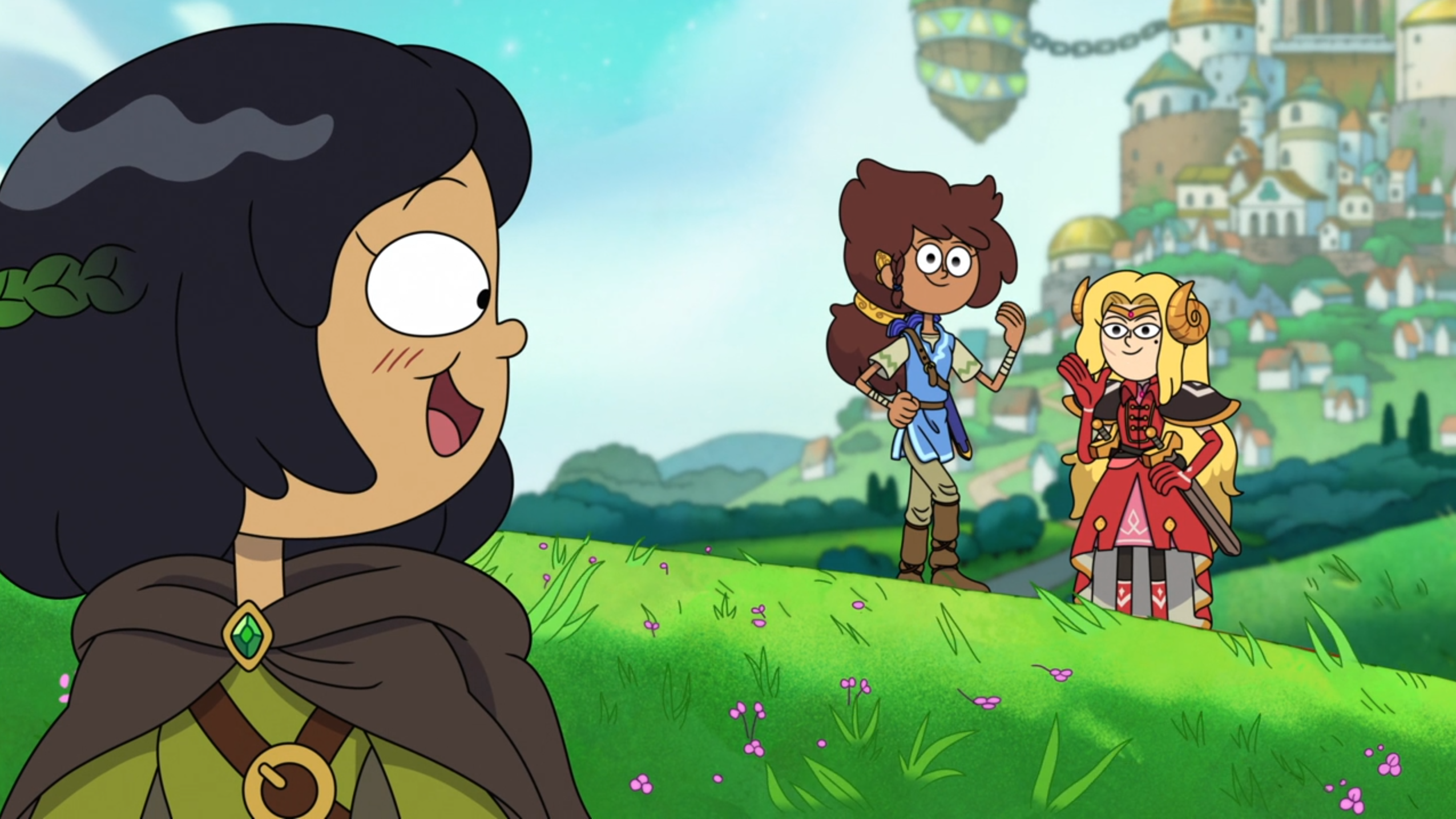 This is especially true for Marcy, whose entire role in this episode takes place within a fictional environment built around her greatest fantasy – an eternal adventure with her friends who will obey her every command. It’s what she always wanted, with Anne and Sasha wearing outfits inspired by Breath of the Wild and Fire Emblem: Three Houses as a fantastical land straight out of Chrono Trigger is laid out before them. This scenario deserved to be an entire episode focusing on Marcy’s inner turmoil, but within the confines of ‘All In’ it still manages to shine. Marcy has spent the entirety of Amphibia fixated on the idea of keeping her friends together forever, throwing aside personal responsibilities and the important issue of what they might want for her own selfish desires. Reality was far more bittersweet, a realisation that Marcy comes to with tears in her eyes as she accepts the uncertain future and hurls the Core’s toxic influence aside.

In the real world Sasha is fighting with her possessed friend, throwing aside her judgmental comments before admitting that she isn’t the bossy and controlling person she used to be. Sasha has grown and learned to love and respect her friends while accepting some people are simply more vulnerable than she is. With a swipe of her sword she snatches away victory from the jaws of defeat. The day is saved, well it certainly seems so as our trio of heroines reunites in a mixture of tears, hugs, and comments of relieved regret. 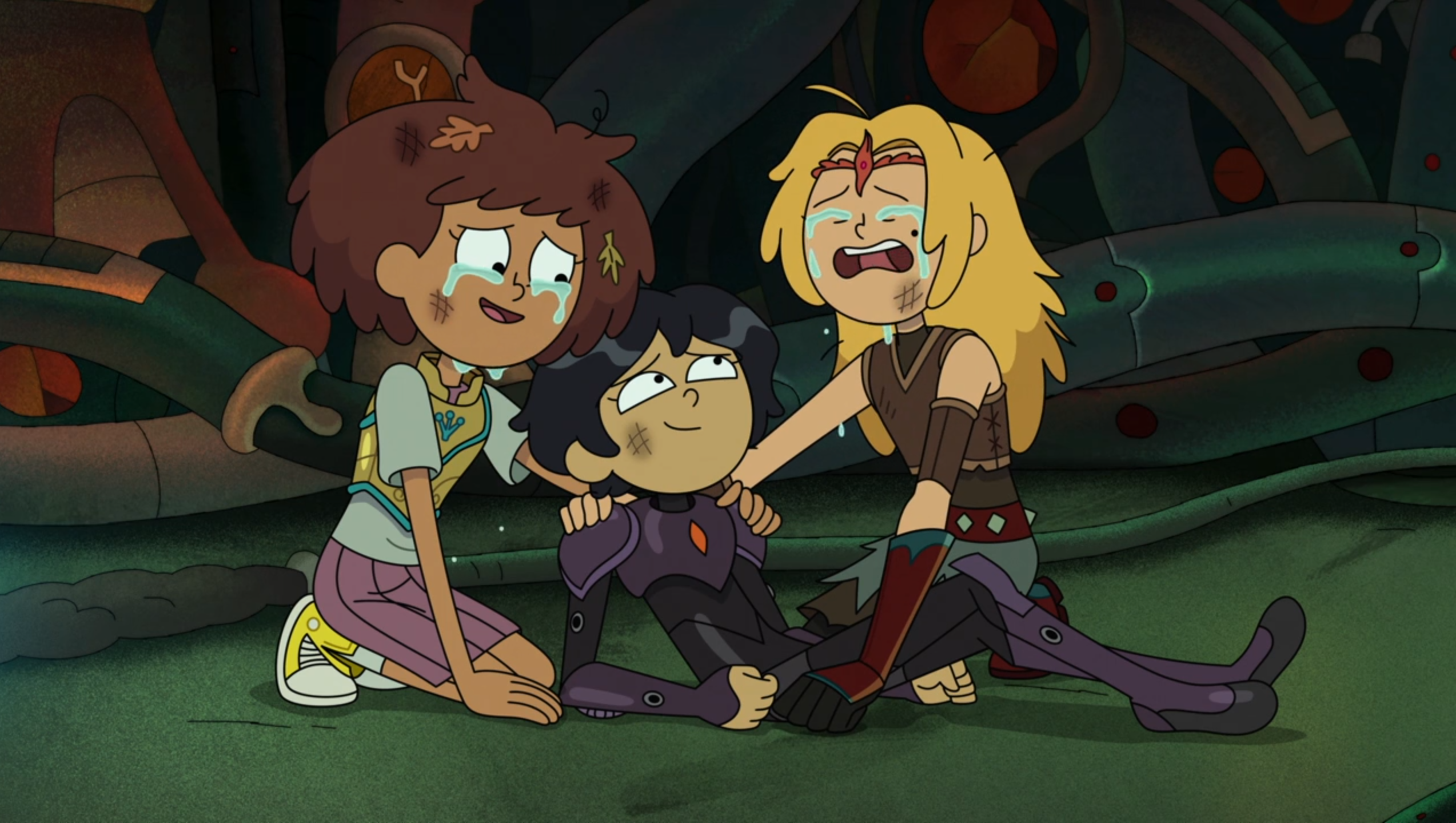 Next week is Amphibia’s final episode, and is poised to close out the narrative while dealing with yet another unexpected threat. ‘All In’ feels like a new benchmark for children’s animation and how it is able to weave together epic action, playful hijinks, and emotional storytelling into a cohesive whole. Much like True Colors before it, this episode was given time to reach its full potential while rarely skimping on important character arcs in order to tie absolutely everything together. Matt Braly and company were trusted to explore the characters they’d created, the world they’d build, and their shared adventures before delivering on a coming conclusion that might actually live up to our expectations.

It gives me hope for Dana Terrace and the three remaining The Owl House specials despite the show’s cancellation, and how Disney Television Animation decides to transition into streaming while continuing to build upon its cable output with exciting and inclusive stories that aren’t afraid to try new things without undermining the intelligence of young viewers and the themes they’re willing to embrace. Amphibia might be coming to an end, but everything it has managed to achieve also feels like it could be the start of something entirely new.